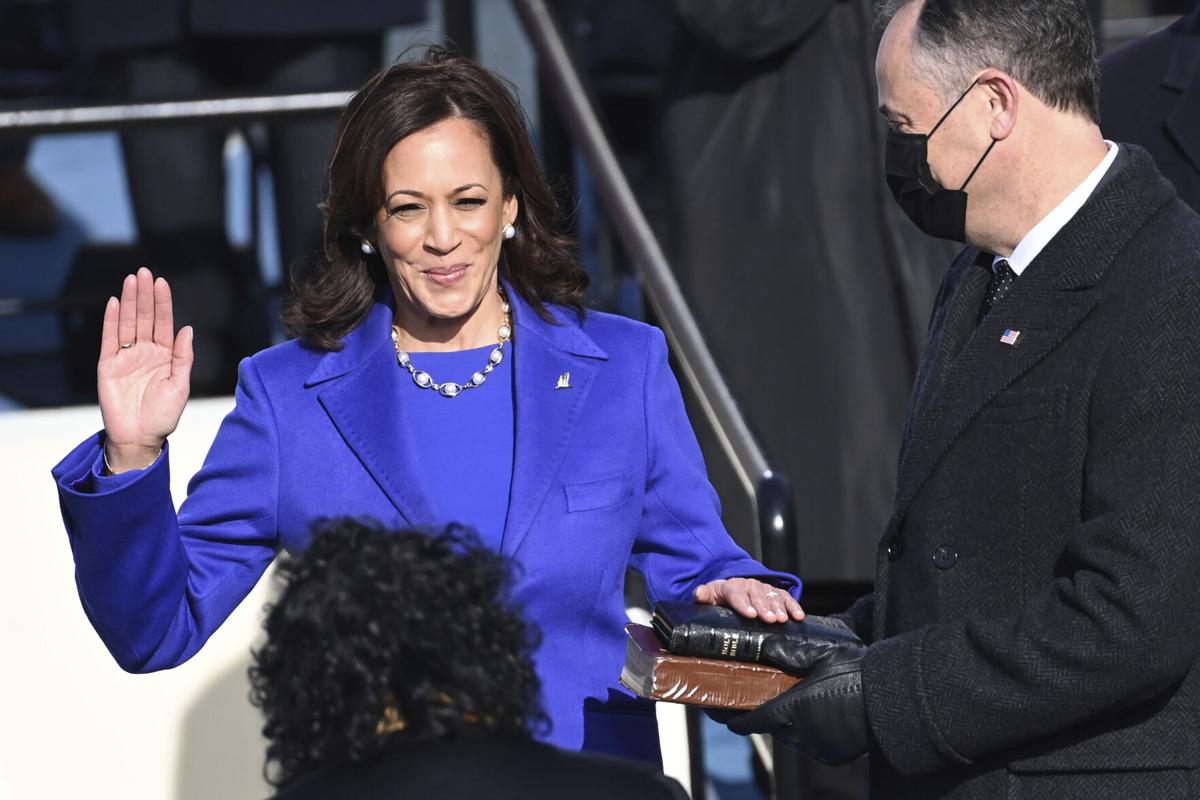 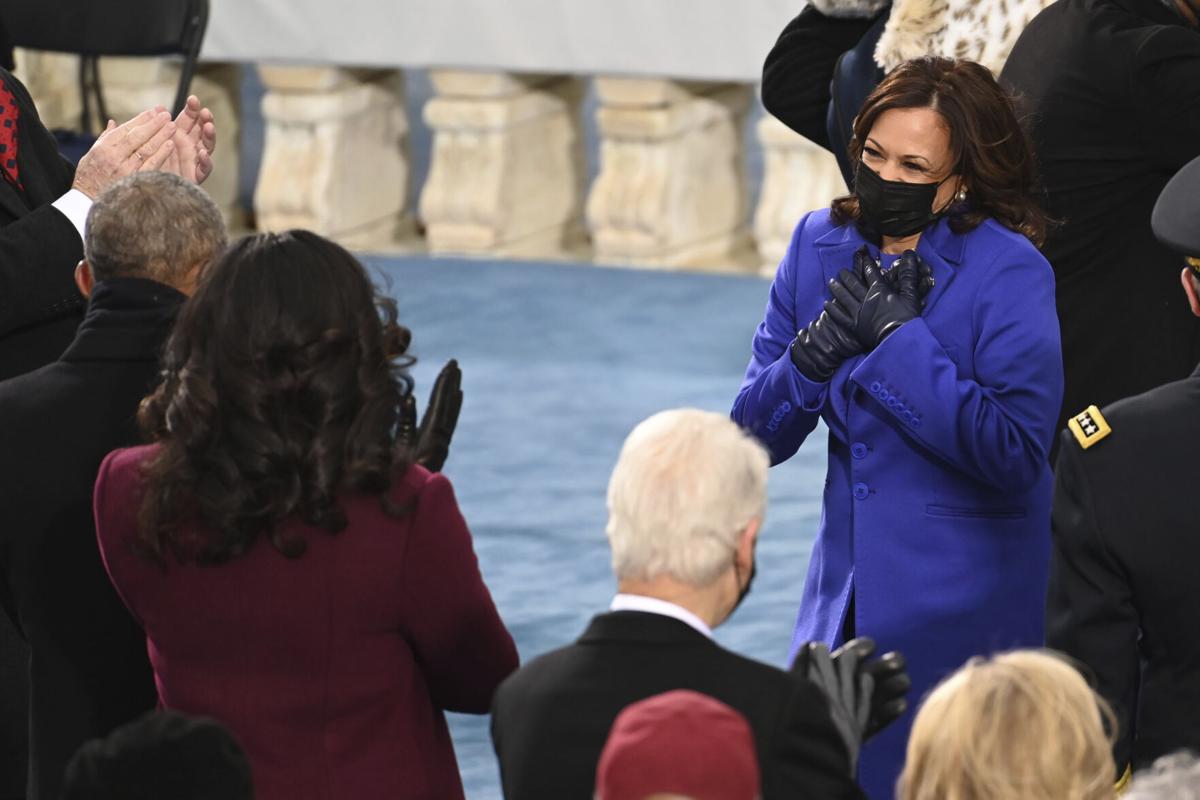 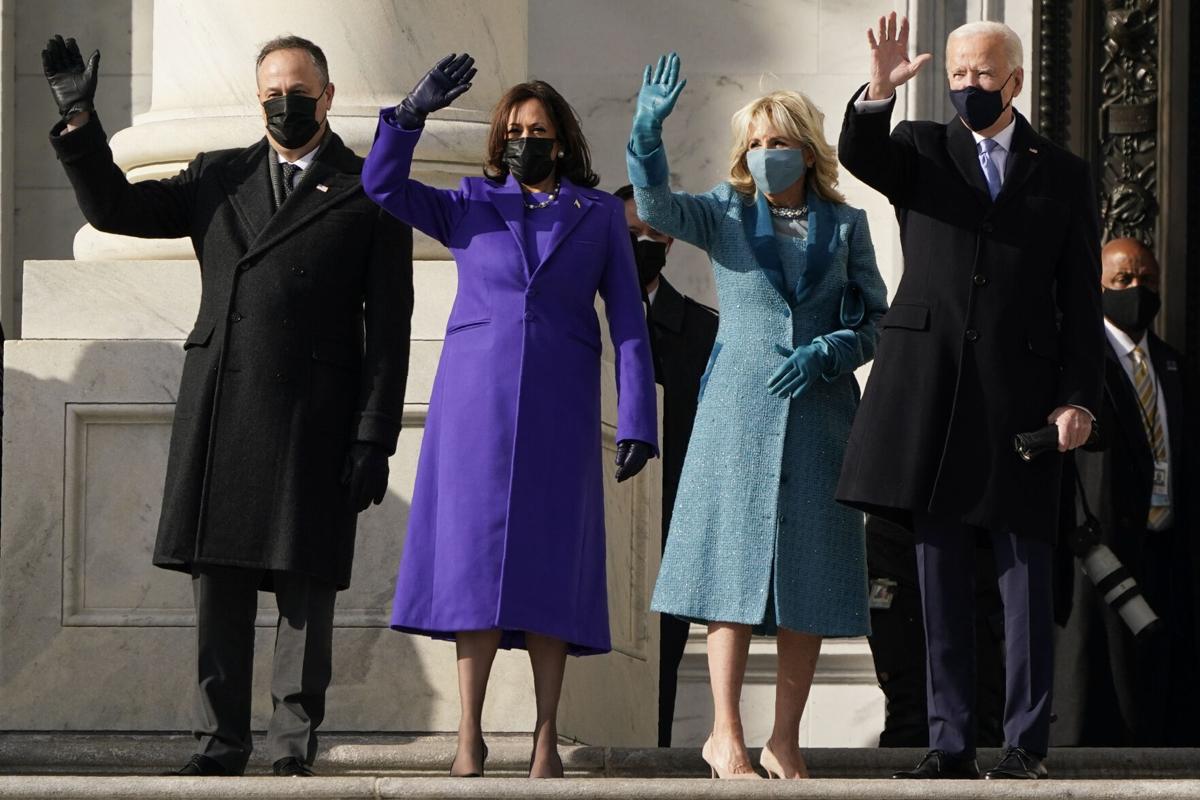 President-elect Joe Biden, his wife Jill Biden and Vice President-elect Kamala Harris and her husband Doug Emhoff arrive at the steps of the U.S. Capitol for the start of the official inauguration ceremonies, in Washington, Wednesday, Jan. 20, 2021. (AP Photo/J. Scott Applewhite)

President-elect Joe Biden, his wife Jill Biden and Vice President-elect Kamala Harris and her husband Doug Emhoff arrive at the steps of the U.S. Capitol for the start of the official inauguration ceremonies, in Washington, Wednesday, Jan. 20, 2021. (AP Photo/J. Scott Applewhite)

The bright purple dress and suit jacket that Kamala Harris wore at her inauguration as vice president this week was rooted in the women's suffrage movement from a century ago, in a local Baptist church and in designer Christopher John Rogers II's art classes at Baton Rouge Magnet High School.

Women often wore the color purple while fighting to win the right to vote in the early 20th century. Shirley Chisholm, the first Black woman elected to Congress, also often wore purple on the campaign trail, and Harris has noted that Chisholm "created a path" for her.

"My goal working with (Harris') team was to craft something that radiated confidence and a personal sense of style while also remaining classic, comfortable, and precisely tailored," Rogers wrote, replying to a series of questions submitted through his publicist Thursday.

Rogers, 27, wrote he was "honored and humbled to have played a small part in this historic moment," in an Instagram post Wednesday.

Rogers' father, Christopher John Rogers Sr., said in an interview that he remembered taking his son to their local Baptist church and him being fascinated by the clothing worn by the worshippers. At Baton Rouge Magnet High, teachers and mentors helped the younger Rogers display his pieces at shows in the area and he received plaudits for his striking designs.

"The mix of 'Saturday casual' and 'Sunday best'; of mixing vintage wares from the likes of Time Warp with newer, classic pieces; and my time in art classes in Baton Rouge all have influenced my work and continue to do so," the younger Rogers wrote, referring to the vintage clothing boutique in Baton Rouge.

After high school, Rogers set his sights on moving to New York City and becoming a fashion designer. He attended the Savannah College of Art and Design in Georgia, graduating in 2016 and launching his own brand that same year in New York. Just last year, Rogers won the Council of Fashion Designers of America’s prestigious American Emerging Designer of the Year award.

Rogers' father said watching the vice president take the oath of office in a purple dress his son designed is one of the proudest moments of his life. His son has also had his inspirations worn by Michelle Obama, Lizzo, Rihanna and Tracee Ellis Ross, but his father noted how special it was to see his son’s work at the “pinnacle of American democracy.”

Rogers Sr., 55, only learned Wednesday morning, as he was driving to work, that Harris would be wearing his son’s designs as she became the country’s first woman, Black person and Asian American person to be vice president. Rogers said he “tried not to get too emotional” and struggled to focus at work as the weight of his son’s accomplishment hit him before he raced home to watch the swearing-in on TV.

“That’s when it really hit home that this is our son’s piece that he designed and has now become a part of history forever,” said Rogers Sr., who's lived in Baton Rouge since 1984. “This is something that was raised right here in this community in Baton Rouge.”

Growing up, the younger Rogers, whom his father affectionately refers to as “CJ,” always had an interest in art and design that was intensified by his love for watching fashion shows on YouTube.

“He’s accomplished a lot in 10 years,” the elder Rogers said. “I think the big thing about CJ is that he’s very focused; he’s very driven. Once he makes his mind up on something that he wants to do, he’s not going to leave it unturned. He’s going to accomplish it.”

Seeing his son’s design play a part in this week's historic inauguration and the racial and gender barriers it broke made the elder Rogers emotional as he discussed his son’s accomplishments.

“He is always taking family and community very seriously,” Rogers Sr. said. “He understands the struggle. It’s not always been easy to get where he’s at or where we have been as a society and a community. He’s always strived to have a positive influence on our community.”

The elder Rogers said he didn’t want his pride to overshadow his son’s accomplishments and impact on the community and the nation.