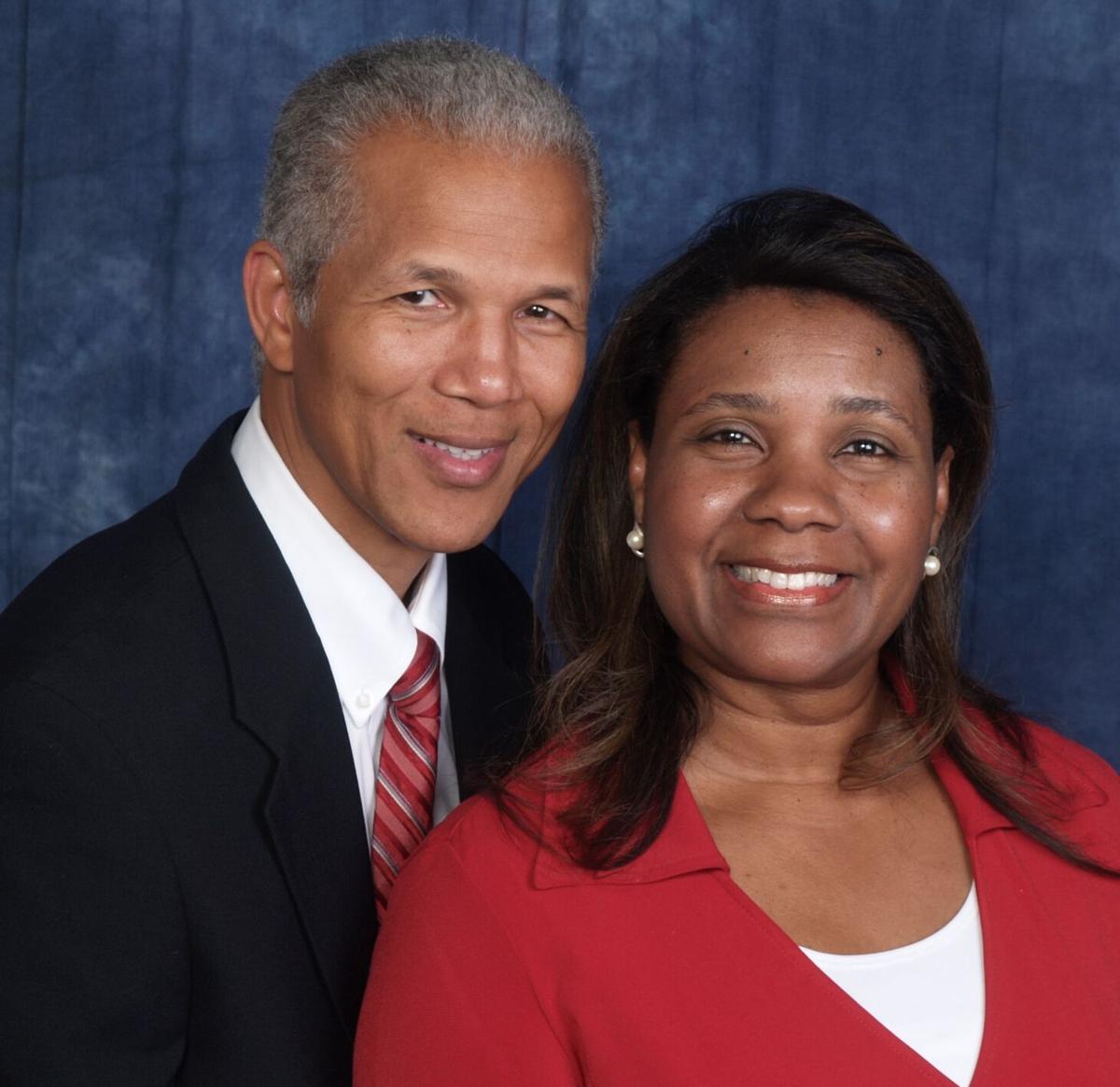 John and Michelle Wright Amos came to Baton Rouge early this summer to embark upon a three-year mission after John Amos was called to be president of the Louisiana-Baton Rouge Mission for the Church of Jesus Christ of Latter-day Saints. 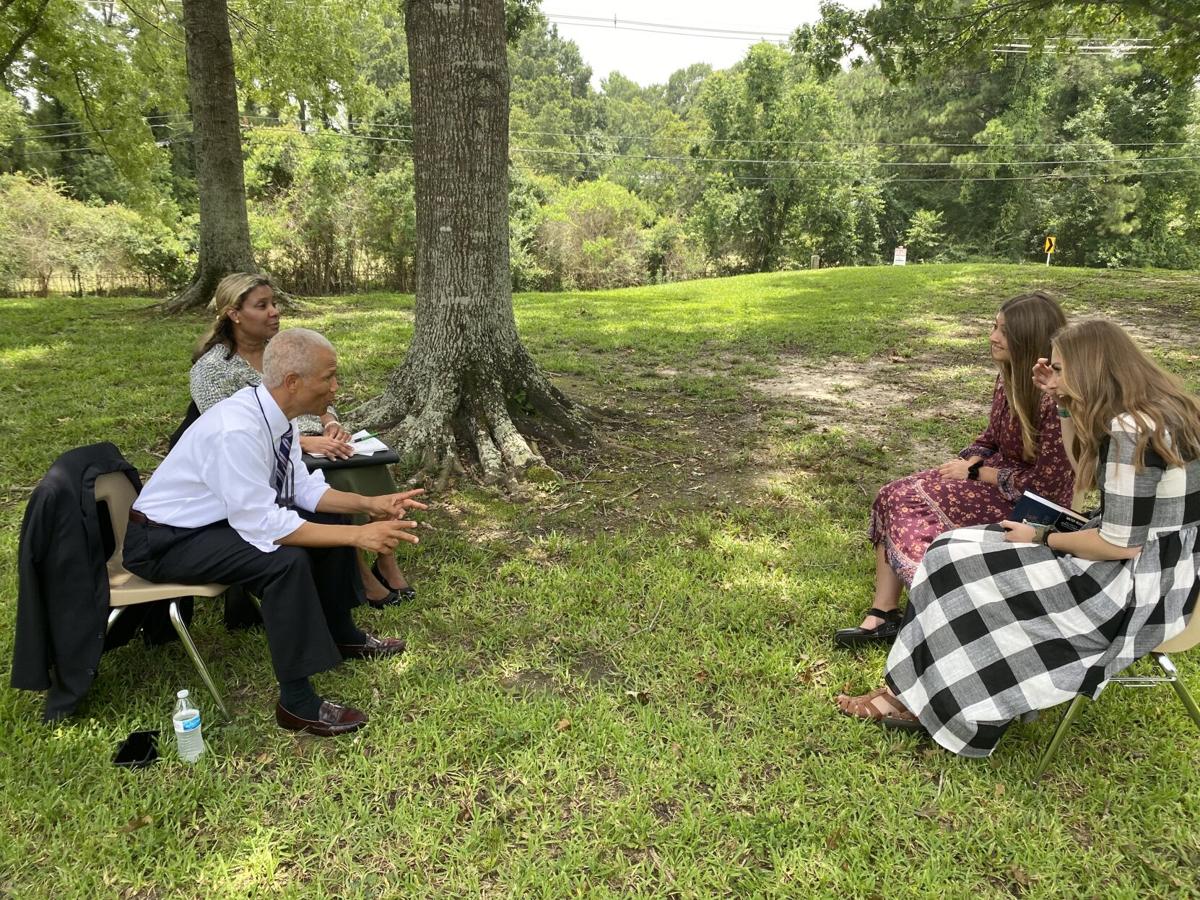 John Amos, left, president of the Louisiana-Baton Rouge Mission for the Church of Jesus Christ of Latter-day Saints, and his wife, Michelle, meet with two sister missionaries. 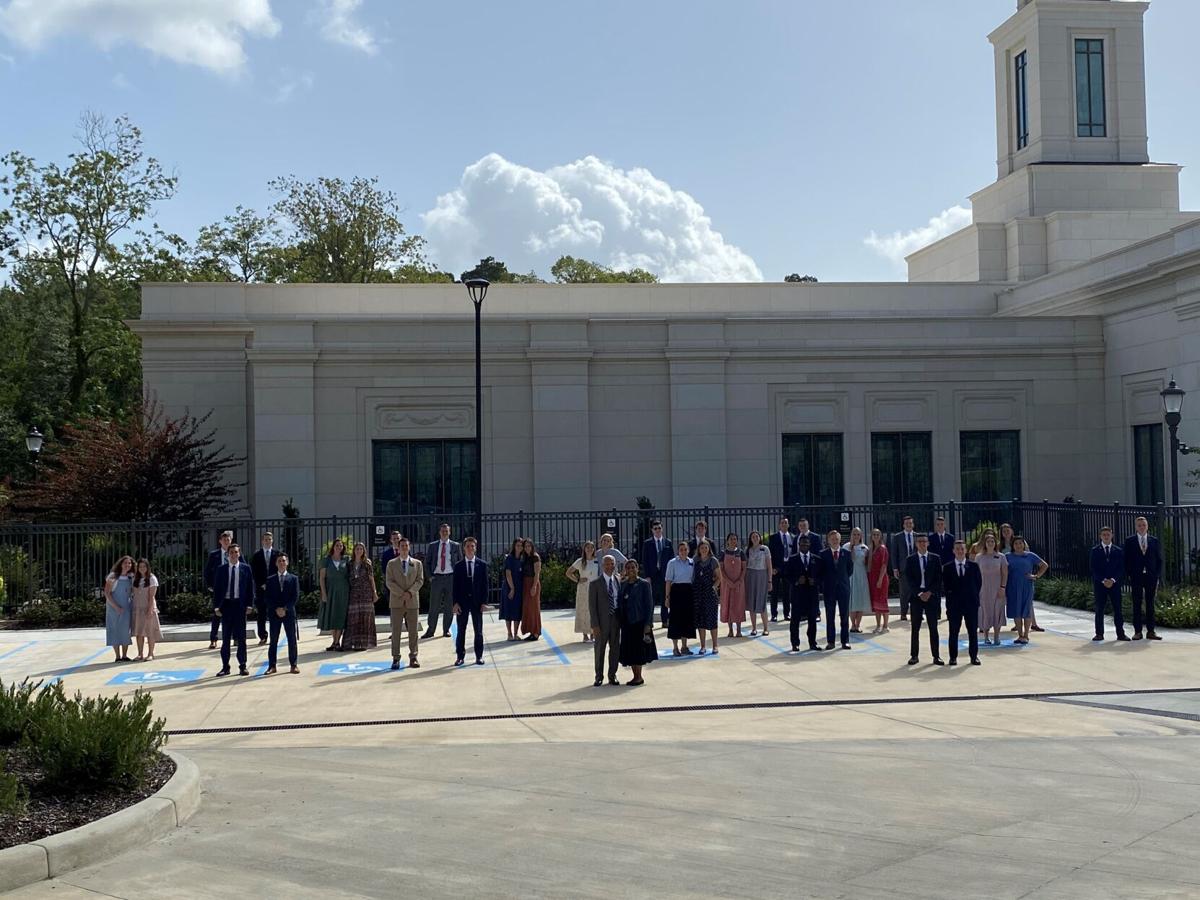 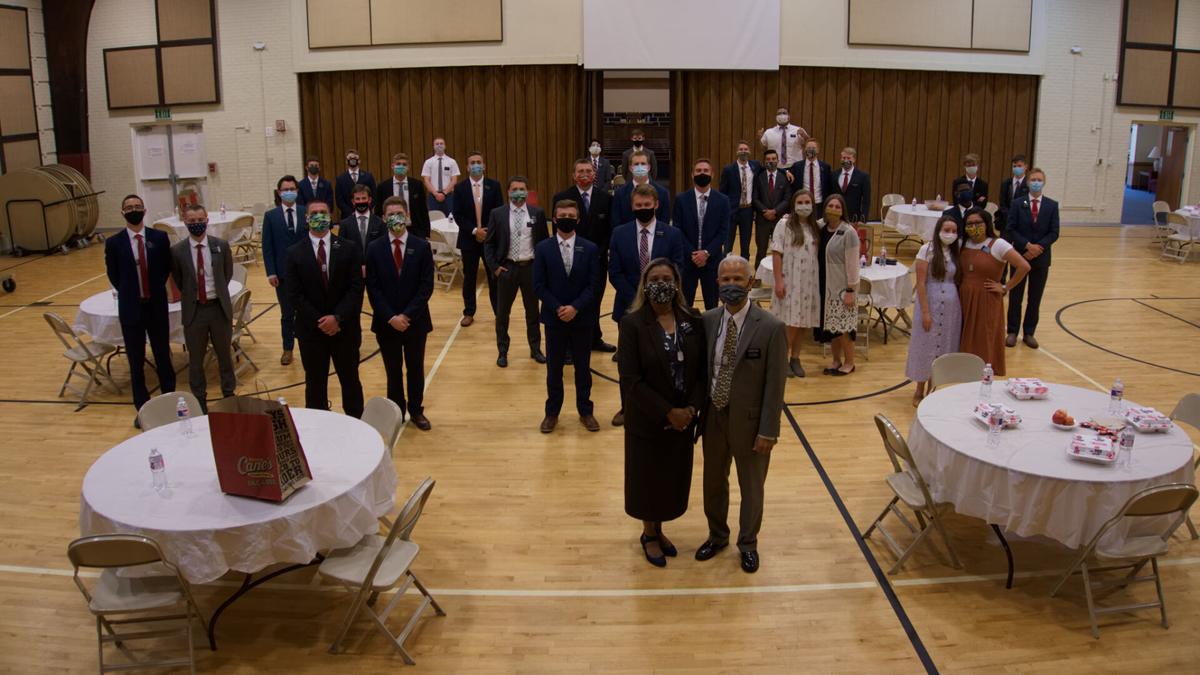 John Amos, front, president of the Louisiana-Baton Rouge Mission for the Church of Jesus Christ of Latter-day Saints, and his wife, Michelle Wright Amos, meet with New Orleans missionaries for a mission conference. 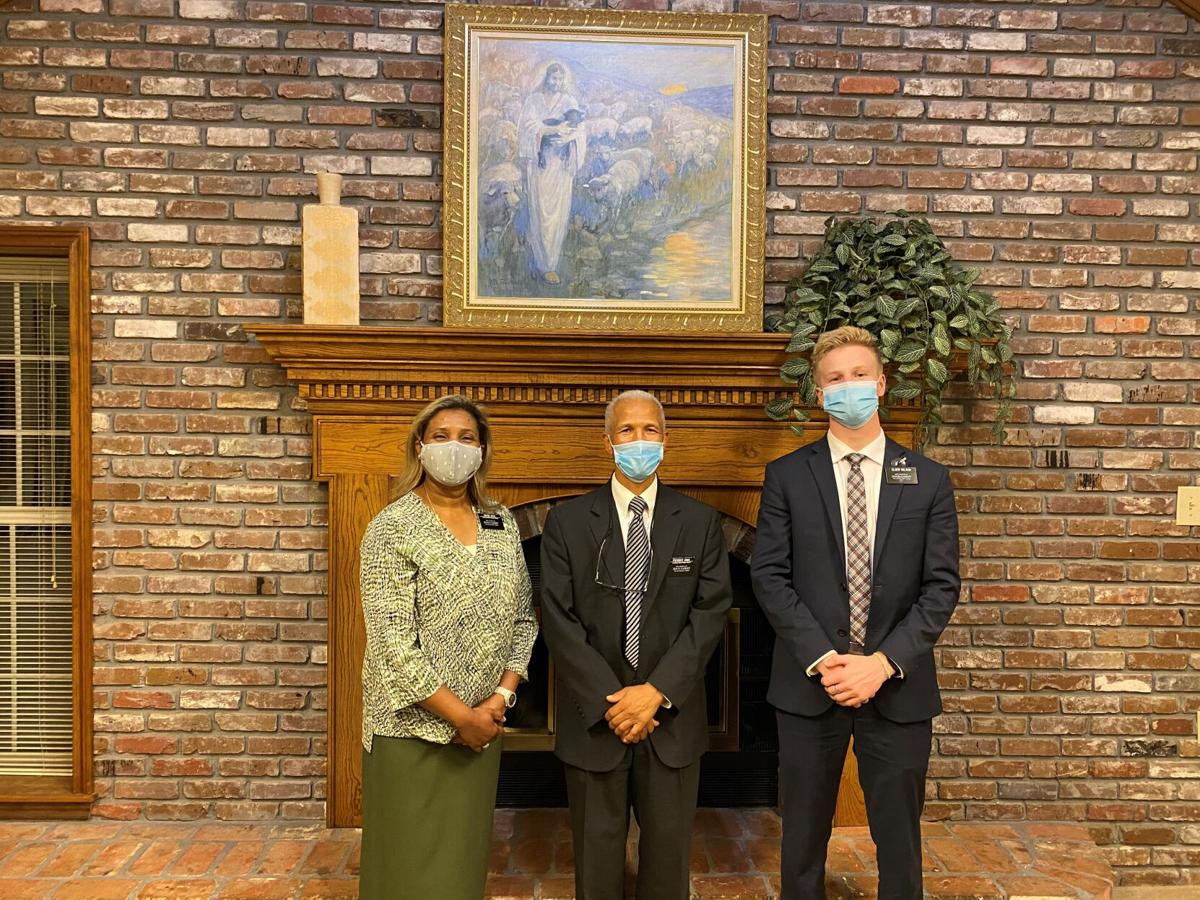 Michelle and John Amos, from left, meet with one of the arriving missionaries at their Baton Rouge mission home. 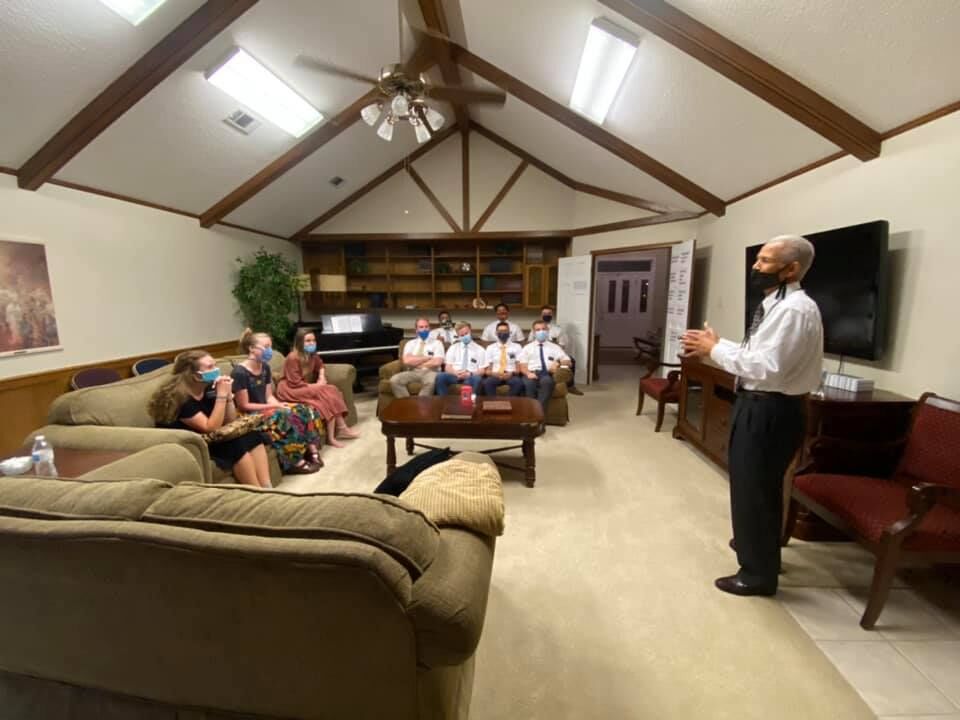 John Amos, right, president of the Louisiana-Baton Rouge Mission for the Church of Jesus Christ of Latter-day Saints, teaches newly arrived missionaries at his mission home after picking them up from the airport.

John and Michelle Wright Amos came to Baton Rouge early this summer to embark upon a three-year mission after John Amos was called to be president of the Louisiana-Baton Rouge Mission for the Church of Jesus Christ of Latter-day Saints.

John Amos, left, president of the Louisiana-Baton Rouge Mission for the Church of Jesus Christ of Latter-day Saints, and his wife, Michelle, meet with two sister missionaries.

John Amos, front, president of the Louisiana-Baton Rouge Mission for the Church of Jesus Christ of Latter-day Saints, and his wife, Michelle Wright Amos, meet with New Orleans missionaries for a mission conference.

Michelle and John Amos, from left, meet with one of the arriving missionaries at their Baton Rouge mission home.

John Amos, right, president of the Louisiana-Baton Rouge Mission for the Church of Jesus Christ of Latter-day Saints, teaches newly arrived missionaries at his mission home after picking them up from the airport.

Missions have been a way of life for Southern University graduates John and Michelle Wright Amos.

After graduating from Southern in 1989, the pair married and John was commissioned in the Navy and later the Navy Reserve where he spent a combined 21 years as a nuclear power engineer before going into the private sector. He was the only Black engineering director during his time at global conglomerate Siemens Energy.

Michelle went on to receive her master's degree in engineering management from the University of Central Florida in Orlando before spending 30 years working at NASA and the John F. Kennedy Space Center. She was part of the team of engineers who helped with the Mars 2020 rover that launched in July.

But despite the accomplishments and status, the couple say their most significant mission is their Mormon mission.

"There's nothing more important to us than the gospel of Jesus Christ. It is the top priority," said Michelle, a 53-year-old Baker native. "The top priority is people and helping people to understand that Jesus is our savior, and we can't have eternal life or joy in our family without him."

The couple came to Baton Rouge early this summer to embark upon a three-year mission after John was called to be president of the Louisiana-Baton Rouge Mission for The Church of Jesus Christ of Latter-day Saints. The mission has 226 young missionaries and comprises most of Louisiana, except the western region from Lake Charles to Shreveport, and most of Mississippi.

The assignment meant the couple had to retire from their high-powered positions and leave their home in Orlando. The decision includes commitment to full-time mission work and no visits to their three children or four grandchildren.

"That's part of the sacrifice we have made," Michelle said. "We have given up careers and family. The only time we get to see our children is unless they come to see us. … (Our religion) is like the guiding star or a compass to us, and it is part of all the decisions that we make. Our religion impacts our family. It impacts our careers. It impacts our community service. So we are guided by the gospel of Jesus Christ in everything we do."

Said John, "The real focus is to do the things to be eligible to return to our heavenly father. He wants us to do his work here, and that's really our priority. We do our careers to gain knowledge and support ourselves and our families and to better ourselves, but our central focus is always about him."

Michelle said the gospel message can be summed up in two of her favorite scriptures. One is the familiar John 3:16 — "For God so loved the world, that he gave his only begotten Son, that whosoever believeth in him should not perish, but have everlasting life." The other is 2 Nephi 31:7 in the Book of Mormon — "Wherefore, ye must press forward with a steadfastness in Christ, having a perfect brightness of hope, and a love of God and of all men. Wherefore, if ye shall press forward, feasting upon the word of Christ, and endure to the end, behold, thus saith the Father: Ye shall have eternal life."

"That shows how the Bible and the Book of Mormon work hand in hand to help bring people to Jesus Christ," Michelle said. "He is our only hope of salvation in this world. He is the answer to love, and that's what the world needs. That's what we all need right now."

Still, leaving their lives and careers in Florida wasn't easy.

John likened the couple's plight to Nephi, the son of a prophet who wrote the first two books in the Book of Mormon. After his father prophesied what the family needed to do, Nephi prayed and sought confirmation in the Holy Spirit. In 1 Nephi 3:7, it says, "And it came to pass that I, Nephi, said unto my father: I will go and do the things which the Lord hath commanded, for I know that the Lord giveth no commandments unto the children of men, save he shall prepare a way for them that they may accomplish the thing which he commandeth them."

"That's one of my favorite scriptures because the Lord has asked us to do a lot of hard things like this calling we have right now, but I am confident that he will provide a way for us to accomplish it and all that he has asked us to do," he said.

Michelle said it was especially difficult leaving her "dream job" at NASA and not being able to witness the Mars launch in person.

"It was exciting. I was able to watch it on NASA Live, but if I was (still working for the) Kennedy Center, I would have been there at the launch and working with some of the people who worked on that rover," she said.

The Amoses are unsure if they will return to their jobs — John also worked as an adjunct professor at the University of Central Florida — upon the completion of their mission.

"I think the both of us would like to serve other missions or serve in another mission capacity," Michelle said.

"They need somebody with a lot of experiences from not only in careers, but in the gospel and the organization of the church," John said.

The couple came to the Mormon faith separately and at different points in their lives.

Michelle was raised Baptist but was 11 years old when she was baptized into The Church of Jesus Christ of Latter-day Saints.

"My dad was a Baptist deacon, so my earliest memories were going with dad to church to set up the church, making sure it was warm and he would prepare the sacraments. … We were raised with good Christian values through the Baptist faith," she said.

But Michelle said the family started looking at other "options" and eventually found it in the Mormon religion.

"We were looking for a church that was teaching the scriptures as we understood them," she said.

On Jan. 21, 1979, 13 members of Michelle's family, including siblings and cousins, were baptized into the Mormon church.

It was midway through his junior year at Southern when John was introduced to the Mormon religion. His classmate, Michelle, asked him out on a date.

"I asked him to go to a church function with me. That was our first date," she said. "He agreed to go and went, and we had a good time."

John was struck by the family atmosphere.

"The experience was a little different than what I experienced in church before," said John, who grew up Catholic. "It was really family-focused and not only on Sundays, but every day of the week was the exact same standards they were living regardless of what was going on. That was interesting to me."

Interesting enough for him to attend seminary with the Mormon students during his senior year at Southern, he said.

"By the end of that year, I had developed a very strong testimony of the gospel and the way the gospel was lived and the authority with it and was committed that that was the way I was going to spend my life," he said.

John and Michelle were married in 1990.

The Church of Jesus Christ of Latter-day Saints is an active body in several areas, John said. Those missionaries who share the gospel throughout community also serve where needed.

"There's consistent true commitment of the young people to dedicate 18 months to two years to go somewhere in the world and share the gospel 24/7," he said.

Their Mormon service efforts were evident during the aftermath of Hurricane Laura, John said.

"When you start looking at the first responders of civilians in the areas where Hurricane Laura hit hard, I would say that probably 50% of the civilians are from (the Mormon church)," he said.

About 90 missionaries from the Baton Rouge mission spent last weekend continuing to help with hurricane relief in the Leesville, Alexandria and Monroe areas.

"The leaders have a dialogue that's been going on for probably several years now to support diversity and the equal rights and even on Black Lives Matter," John said.

Black people make up only about 6% of 16 million worldwide members of the Mormon church, according to a 2018 Associated Press report.

"Of course, the culture is different compared to the culture we experienced as youth in our family’s predominantly African-American church and community, but our focus on service to God and spiritual growth as Christians have not been impacted because of our race," John said.

He said he doesn't see race as a "day-to-day" issue within the church.

"It's either you love me or you don't," he said. "You have that same concern no matter what church you're at. So I feel the same amount of love from my fellow brethren in this church than I would somebody that loved me in any other church."

Michelle adds another perspective on race.

"I miss the culture and the Black church is like family and community-oriented," she said. "I would say the only thing that I would identify that I miss would be that good gospel soul music."