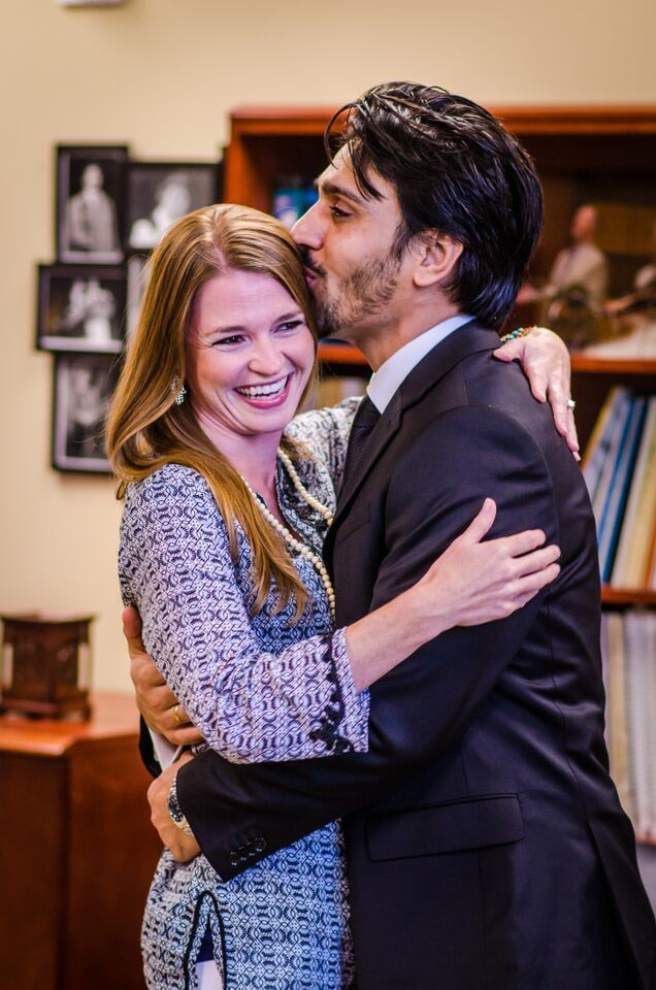 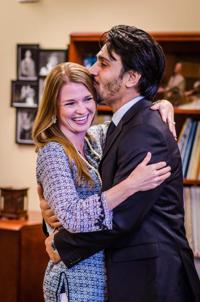 Photo provided by Swine Palace -- Cara Reid and Zarif Kabier play married couple Emily and Amir Kapoor in Swine Palace's production of 'Disgraced.' He is trying to leave his Muslim past behind, while she embraces it in her art. 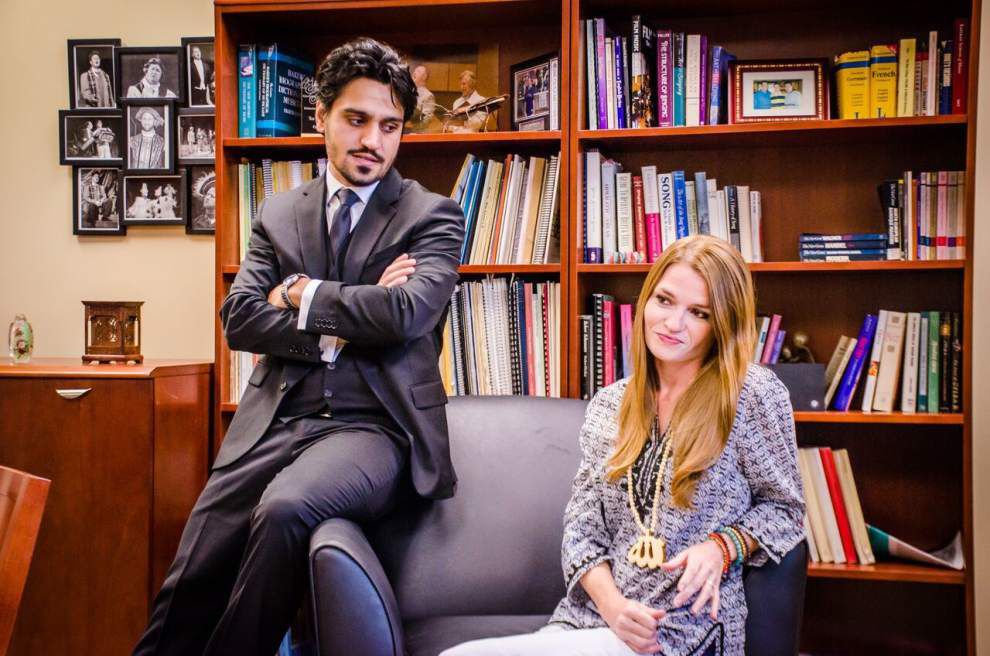 Photo provided by Swine Palace -- Zarif Kabier, left, plays Pakistani-American Amir Kapoor, who is trying to escape his Muslim background, and Cara Reid plays his artist Emily, who embraces his culture through her work, in Swine Palace's production of 'Disgraced.'

Photo provided by Swine Palace -- Cara Reid and Zarif Kabier play married couple Emily and Amir Kapoor in Swine Palace's production of 'Disgraced.' He is trying to leave his Muslim past behind, while she embraces it in her art.

Photo provided by Swine Palace -- Zarif Kabier, left, plays Pakistani-American Amir Kapoor, who is trying to escape his Muslim background, and Cara Reid plays his artist Emily, who embraces his culture through her work, in Swine Palace's production of 'Disgraced.'

Is Amir Kapoor that much different from Stanley Kowalski?

In some ways, yes. Stanley isn’t running away from his identity. Amir is. But if the dangerous instinct simmering deep within each is released, the resulting damage to their loved ones can be permanent.

“So, here we have two men in American theater who learn who they really are in the end,” says Zarif Kabier, who plays Amir in Swine Palace’s production of Ayad Akhtar’s Pulitzer Prize-winning drama, “Disgraced.”

The play opens Wednesday, Sept. 30, in the Claude L. Shaver Theatre in the LSU Music and Dramatic Arts Building on Dalrymple Drive.

“The dynamic has changed,” Kabier continues. “For so long in theater, we had characters like Tennessee Williams’ Stanley Kowalski as examples of an angry American male. But because of society today, Amir becomes the equivalent.”

Some people may not see it that way, because Amir is something that Stanley isn’t — Muslim. At least, that’s Amir’s background, a past he tries to escape as he embraces American culture.

The irony of the story is that Amir is a first generation Pakistani-American. The United States is the only country he’s ever called home, yet his family clings to Islam.

“This story has so many layers,” director Femi Euba says. “It deals with the relationship of Islam and the West through this mixed couple. Amir is a Muslim of Pakastani descent married to a white American woman named Emily.”

“While Amir dismisses his culture, his wife, who’s an artist, celebrates it through her work,” Euba says.

“Disgraced” premiered in Chicago in 2012 and made its Broadway debut in 2014. The most prominent part of the 90-minute, one-act play is a dinner party in the couple’s Manhattan apartment on the Upper East Side.

Amir is a mergers and acquisitions lawyer who works with Jory. Dinner conversation becomes heated after turning to politics and religion, and Amir’s assimilated nephew, Abe, played by Nitin Mane, shows up with concerns regarding a local imprisoned imam.

Abe thinks the charges against the imam are bogus and wants Amir to take the case. Amir wants nothing to do with it.

Amir reluctantly gets involved in the imam’s problems, and the action escalates to a climax in which Amir discovers a brute force he didn’t believe was a part of his character. Yet he’s always sensed its existence.

“He realizes who he is,” Euba says.

And it isn’t much different from blue-collar brute Kowalski. Kabier makes this analogy. He’s a New York-based actor who is tired of playing the “angry Arab” in television and film.

“I jumped at the chance to be in this play, and my agent asked if I wanted to take that chance,” Kabier says. “He said television and film opportunities may come up while I’m in Baton Rouge. I asked him if they would be the same old parts, and he said, ‘Probably.’ This is what I want to do.”

Kabier immigrated from Afghanistan with his mom and siblings at age 11. He said his father, a doctor, was killed by shrapnel from a Taliban bomb, and his mother, a teacher, was forbidden to practice her profession.

The family paid smugglers to take them to Pakistan, Kabier said, and a sponsor brought them to the U.S., where they settled in Portland, Oregon. Kabier’s mom still teaches, and his siblings have found jobs in the medical field.

“I’m the only actor,” he says. “And I don’t consider myself Muslim. I’m inclined not to believe in a higher power. Ayad Akhtar’s story is close to my heart. It needs to be told, and as artists, we have the power to bring up these subjects and heal by telling these stories.”

“Ayad Akhtar has really been under fire from conservatives in the Muslim community for looking at these subjects and asking these questions in this play,” Reid adds. “And there may be some things in the conversations on stage that will be controversial to the audience.”

But that’s the changing dynamic in American theater of which Kabier spoke earlier. The Stanleys are still around, they’re still controversial, but now they have different names and issues.