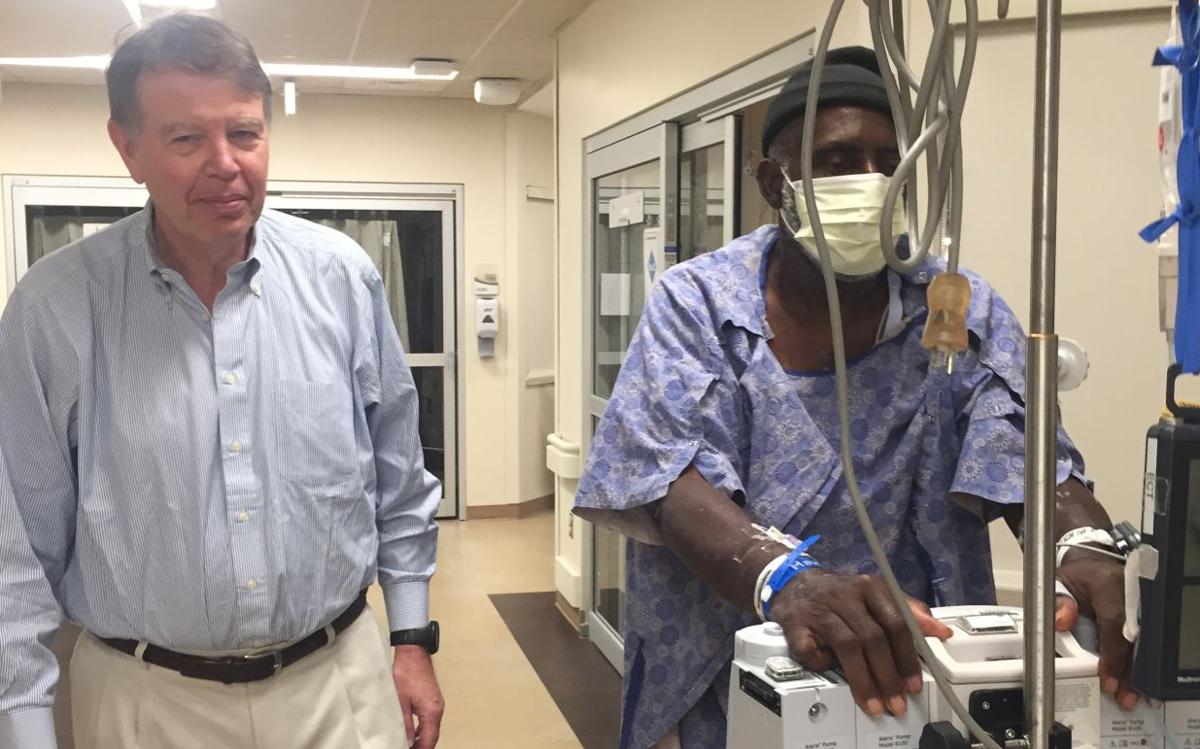 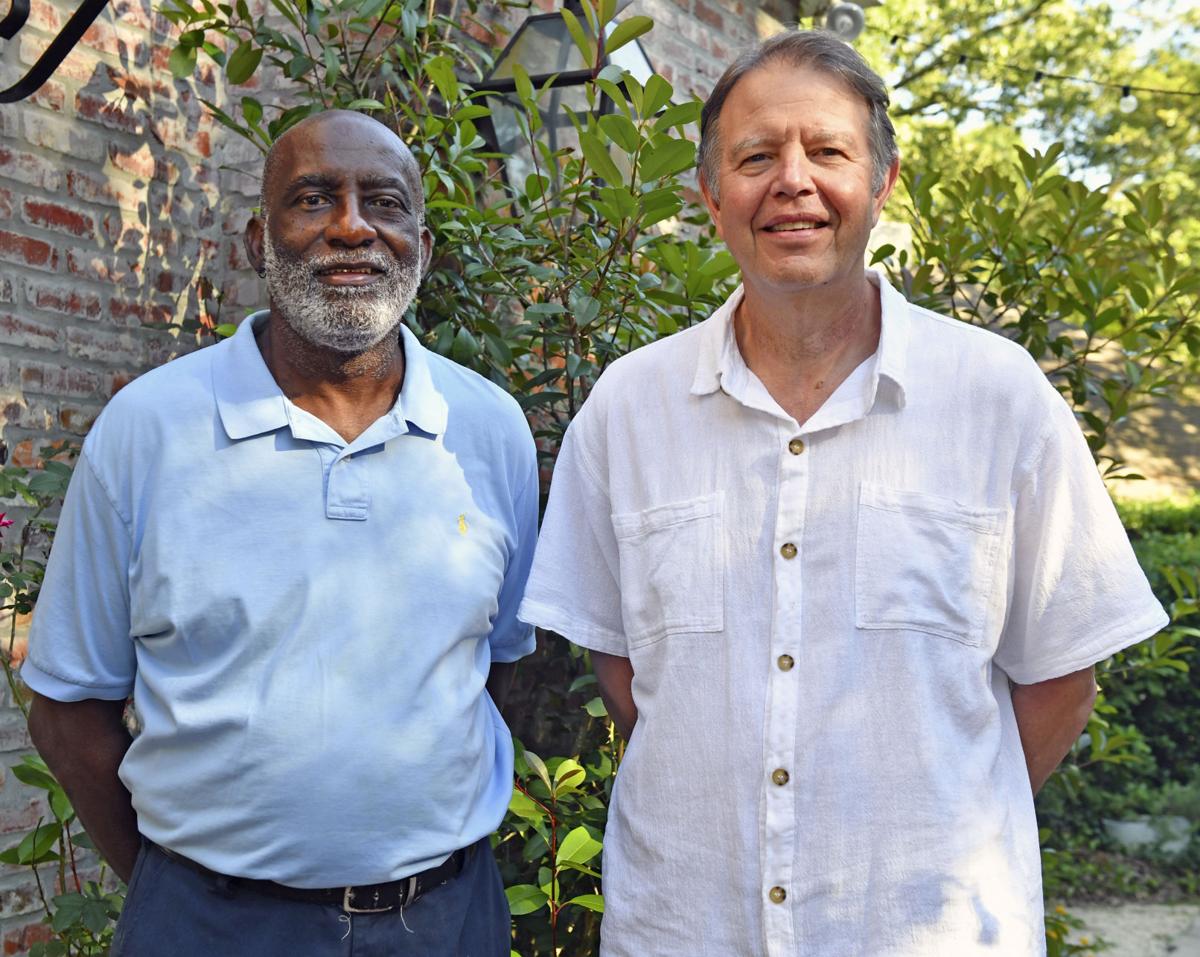 Willie Mack Titus, left, and Dr. Carl Luikart knew each other only as high school basketball rivals, until one needed the other's help and a deep and lasting friendship was born. 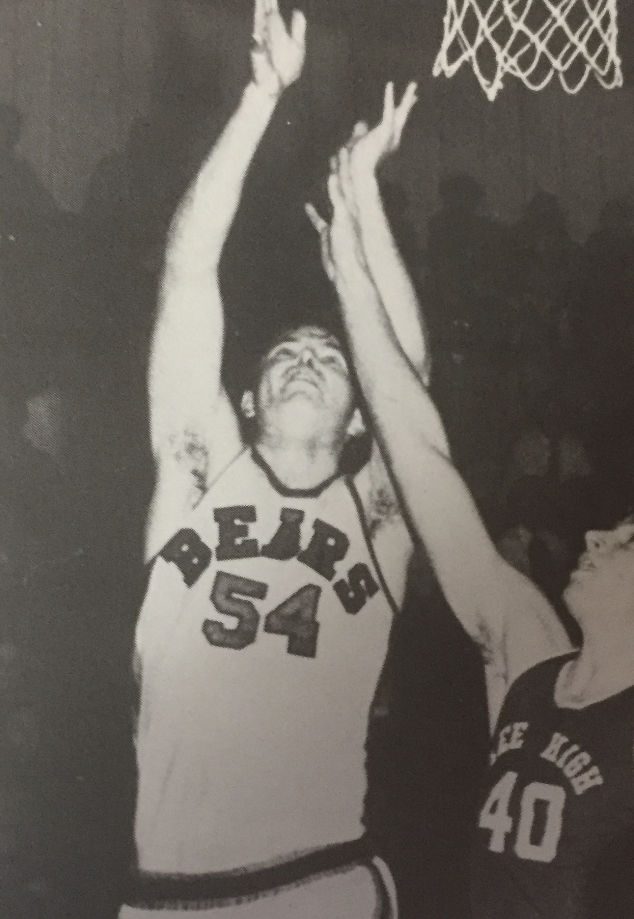 Carl Luikart played basketball at Catholic High School in the late 1960s, when he first heard of Willie Mack Titus, who years later would change his life. 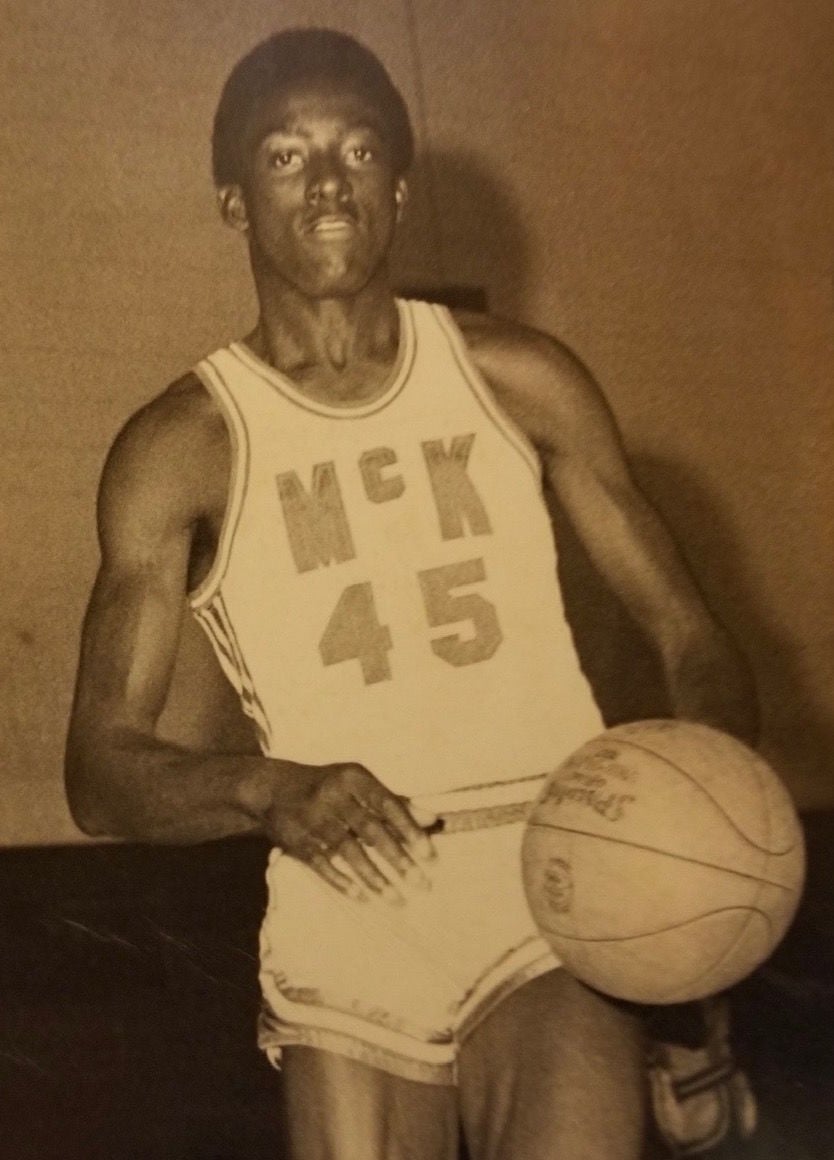 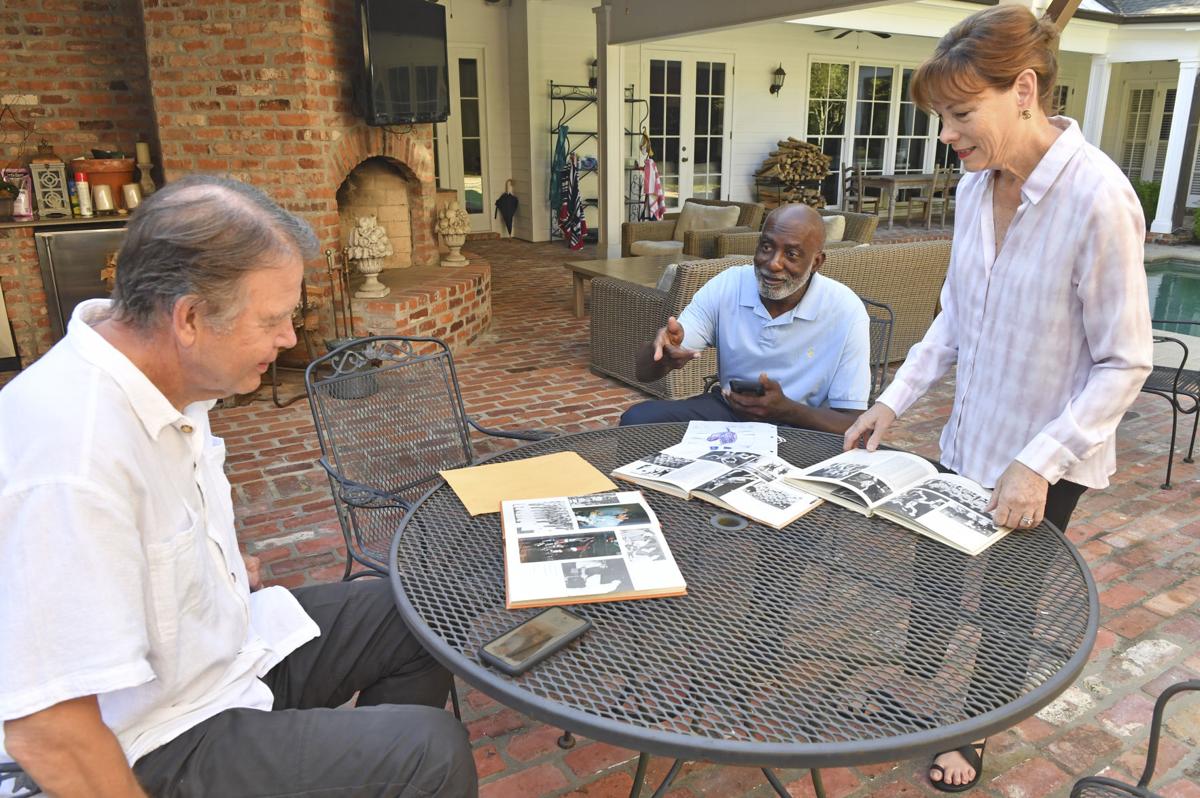 Dr. Carl Luikart, Willie Mack Titus and Diana Luikart, from left, look through photos and yearbooks from 1970-1972 when the two men's high school basketball teams battled it out on the court. 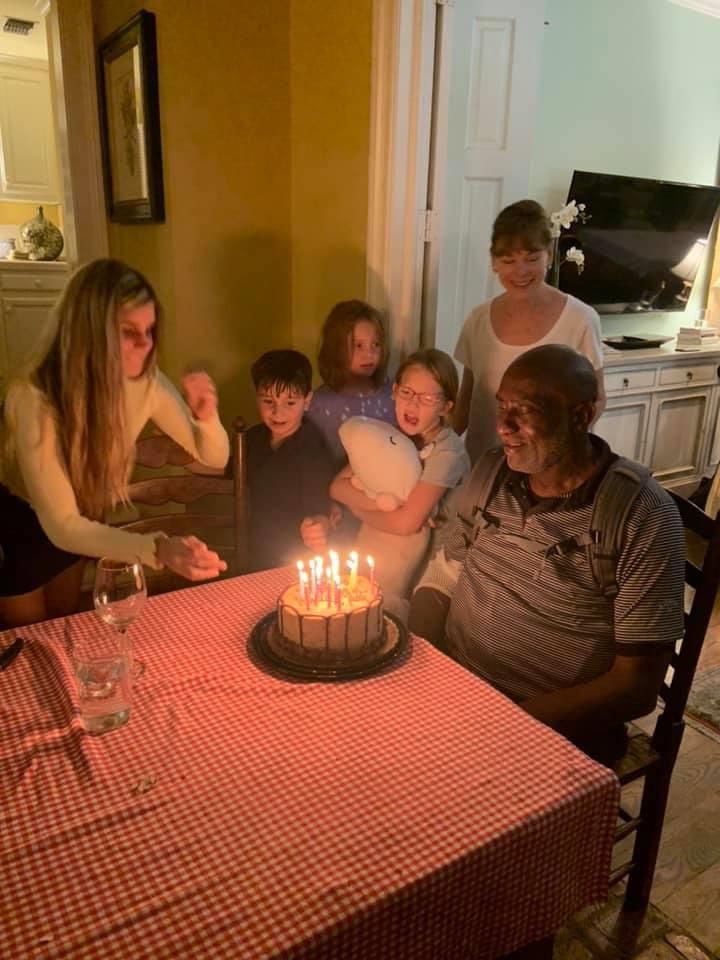 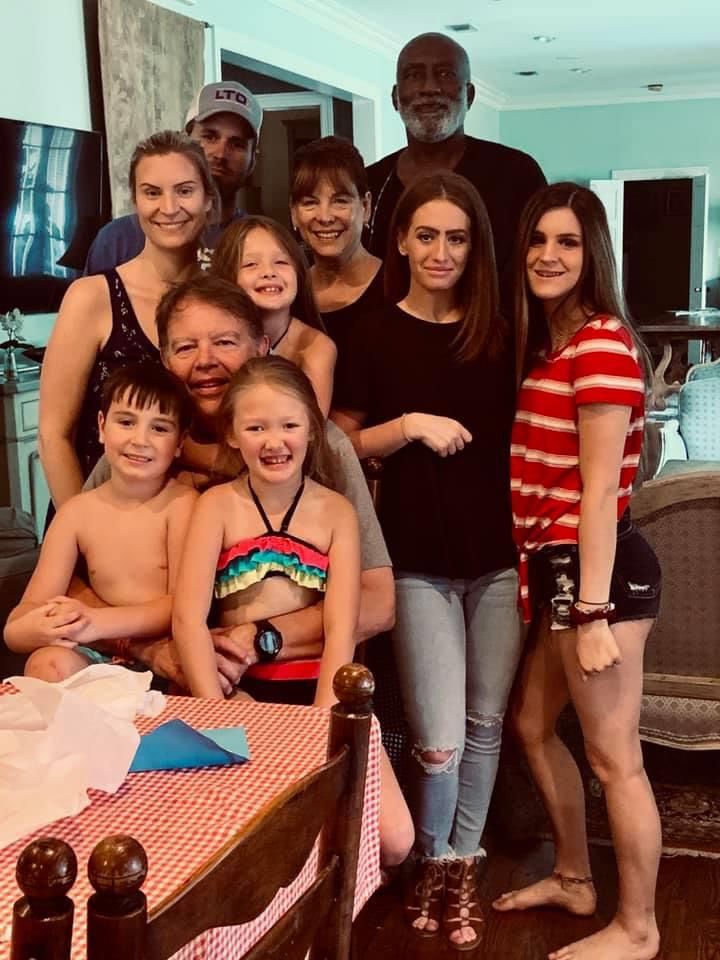 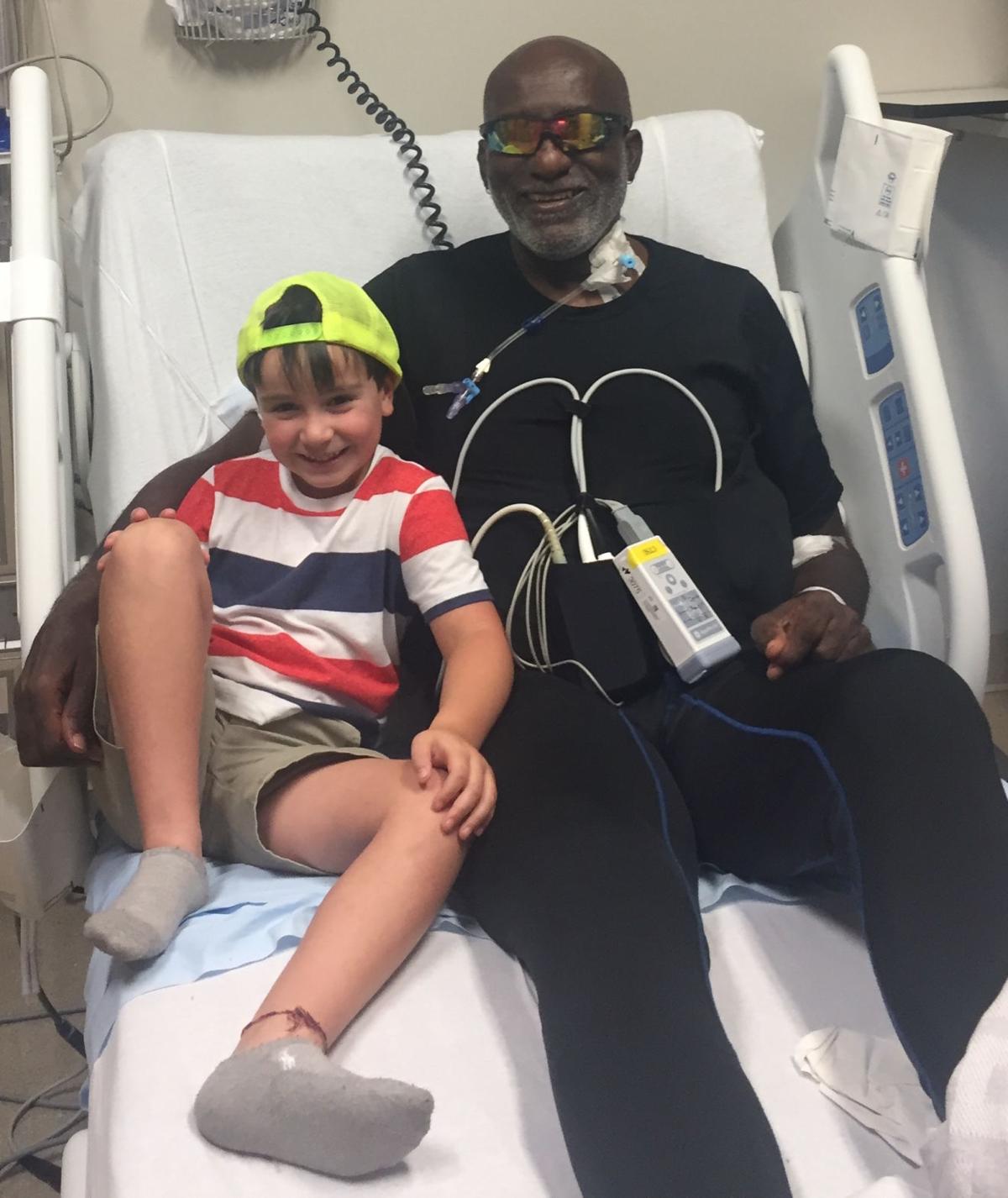 Dawson Luke Carroll, grandson of Dr. Carl and Diana Luikart, visits with Willie Mack Titus before his heart and kidney transplants in January. 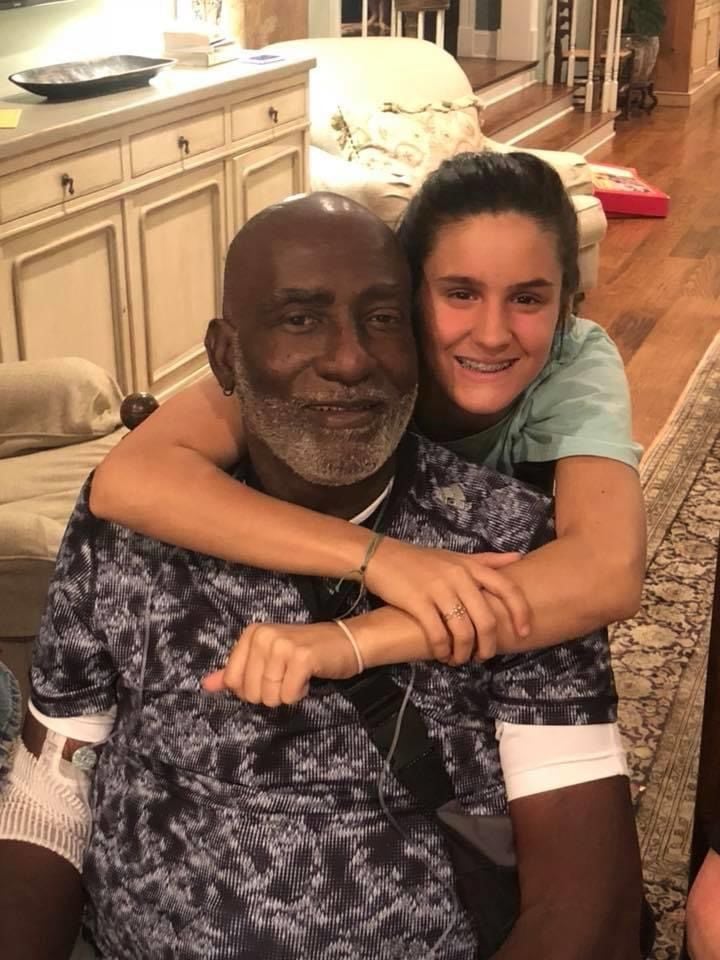 Dennon Carroll, granddaughter of Dr. Carl and Diana Luikart, hugs gives Willie Mack Titus, who became a part of the family during his recoveries from surgeries.

Willie Mack Titus, left, and Dr. Carl Luikart knew each other only as high school basketball rivals, until one needed the other's help and a deep and lasting friendship was born.

Carl Luikart played basketball at Catholic High School in the late 1960s, when he first heard of Willie Mack Titus, who years later would change his life.

Dr. Carl Luikart, Willie Mack Titus and Diana Luikart, from left, look through photos and yearbooks from 1970-1972 when the two men's high school basketball teams battled it out on the court.

Dawson Luke Carroll, grandson of Dr. Carl and Diana Luikart, visits with Willie Mack Titus before his heart and kidney transplants in January.

Dennon Carroll, granddaughter of Dr. Carl and Diana Luikart, hugs gives Willie Mack Titus, who became a part of the family during his recoveries from surgeries.

Dr. Carl Luikart wasn’t accepting new patients in 2013 when his nurse told him Willie Titus wanted to see him.

Willie Titus. The name was familiar. He had his nurse ask if he was Willie Mack Titus. He was.

“Put him in,” Luikart said.

Neither man knew how immeasurably both their lives were about to change.

Titus, now 66, not only received life-extending care, but became his doctor’s long-term houseguest. Luikart, 65, gained a deep, unexpected friendship that forced him to confront prejudices that a comfortable life had never challenged.

Until that office visit, the two had never spoken, having grown up geographically close but worlds apart. All that connected them were long-ago basketball games.

But not just any basketball games.

Titus and his McKinley High School teammates entered the Catholic High gym on Dec. 2, 1969, an hour before the junior varsity game that would precede the varsity contest. The gym already was packed.

“All eyes were on us,” Titus said. “I couldn’t wait to get to the dressing room. … We just had a desire to play the best game we could ever play. It was that black-white thing.”

It was the first time a predominantly white high school had played a black school in any athletic event in East Baton Rouge Parish.

This U-High teacher's homework assignment: Explore the 'safari' in a Baton Rouge backyard

Steve Babcock is trained to see the world scientifically. Being quarantined, however, has him looking at it like a child again. As a result, y…

The schools played twice the next season. McKinley won both, including a 125-49 victory on its home court.

“I couldn’t have told you who Willie Mack was until they beat us by 76 points,” Luikart said. “That was a plain old ass-kicking. … After that game, I never forgot any of their starting five — ever.”

Titus said one reason McKinley thrashed Catholic so relentlessly was that, before the game, the players read newspaper stories that put forth then-common stereotypes about black athletes.

“We as black boys, all we could do was ‘rip and run,’” Titus said. “We set out to show them different. We can run. We can run plays. We can screen. We can pick. We can rebound. We can do all the fundamental things of basketball. … We’re just as good or better.”

When the coronavirus pandemic hit locally, William Hankins, of Baton Rouge, was more worried than most. His wife is an emergency room doctor, …

After high school, Luikart and Titus went their separate ways: Titus to become a basketball star at Southern University, where he was known only by his first name instead of Willie Mack, and Luikart to play basketball at Nicholls State University in Thibodaux.

Both returned to their hometown: Titus as a public school teacher and coach, Luikart as a cardiologist.

Their paths might never have crossed again. Luikart thinks it’s no coincidence they did.

“At times when I’m not feeling real good about myself, I will pray to the good Lord and ask him to put somebody in my path today that I can help,” he said. “For five to seven years prior to this event, every once in a while he would test me. Somebody needed my help. … That seed had been planted in me.”

That seed took root when Titus came to Luikart’s office.

On that day, Titus was supposed to have a pacemaker implanted, but, uncomfortable with his doctor, canceled. He bumped into Darrell Glasper — one of those McKinley starters whom Luikart never forgot — and told him what was going on. Glasper drove him to see Luikart. They talked hoops as soon as Luikart entered the examination room.

“I wanted him to know I remember how badly they beat us,” Luikart said.

Titus’ heart was beating badly. He had congestive heart failure. Luikart treated him for five years. They started having lunch and attending sporting events together.

A coronavirus scare, computer introductions: Such are the stories of this Mother's Day in Baton Rouge

One day, Katie Ruiz will tell Ramie Grace about the fever that separated them for two weeks, and the paralyzing fear that took hold while wait…

“As our friendship got closer and closer, his heart got weaker and weaker,” Luikart said. “In April of 2018, it was a matter of life and death. There was nothing more that I could do in Baton Rouge. … He needed a new pump.”

Luikart connected Titus with Dr. Clement Eiswirth Jr. and Dr. Stacy Mandras at the Ochsner Medical Center in New Orleans for an LVAD heart pump. Recovery from this procedure is difficult, so candidates are rejected if they don’t have a good support system at home.

Titus said he and his wife, Maxine, had a rocky relationship, and he wasn’t convinced she could take care of him. Luikart approached his wife, Diana, who’d been a nurse, about letting Titus stay in the cottage behind their house. She’d only met him once. She agreed, knowing she’d be the primary caregiver.

“Carl has a big heart, huge heart,” Diana Luikart said. “I felt that if he thought this guy needed somebody to help recover from this … we had the cottage. I had experience. We could do this. I didn’t realize that it would take all this care at the time. I thought it would be a couple of weeks.”

It turned out to be a couple of years.

Have you heard any clucking in your neighborhood lately?

The LVAD was a temporary solution until Titus could receive a heart and kidney transplant, which finally took place four months ago. Titus once again returned to the cottage to rehabilitate.

Over two years, he grew close to the family and their friends. Because someone needed to be with him, the Luikarts had more frequent dinners at home with their adult children and grandchildren, for whom he became a friend and confidant.

Granddaughter Abigail Doucet, now 9, held Titus’ hand and counted laps as he walked around the swimming pool as part of his rehab. Grandson Dawson Luke Carroll, 6, and Titus bonded over their love of trucks. Before the transplant, Dawson Luke gave Titus a picture he drew of a truck hauling a heart on a trailer, artwork that was displayed prominently in Titus’ hospital room.

At one 2018 gathering, Luikart asked the grandchildren what was the best thing that had happened that summer. Abigail’s response: “Willie Mack came to live with us.”

‘Part of our family’

A doctor’s son, Luikart grew up in an upper-middle-class bubble. The only black people he had known growing up were housekeepers and yard men his father employed. He’s never considered himself a racist, and he said he treats all patients respectfully regardless of color. But he realizes his life had insulated him.

“I knew … that I have inherent racial biases because I had not been exposed with any sense of intimacy to a black person,” Luikart said.

Have you seen these signs? They were made to help us smile through coronavirus fatigue

“Life is short. Smile while you still have teeth.”

Such intimacy introduced him to another world.

Titus had little contact with his father. When he was 5, his mother, fleeing physical abuse, carried his brother and led Titus on foot in the middle of the night for 15 blocks to find refuge at her sister’s house. His mother worked as a housekeeper, and hand-me-downs from the employer’s family provided him clothes for school. At 15, he lied about his age to get a cafeteria dishwashing job to help his mom make ends meet.

“There was no comparison to now,” Titus said. “It was survival. What got me out of there was athletics: basketball and track.”

Even when the two men didn’t talk about them, their profound differences popped up in unexpected ways. At a birthday party the family threw for him in August 2018, Titus cried. The next day, Diana Luikart asked if he was all right.

Luikart, who once served as the LSU basketball team physician under Brown, recalled watching Shaquille O’Neal and teammate John Picou engage in horseplay, a male bonding moment that showed them as friends, equals, their different races mattering not at all.

“Look at that,” Brown told Luikart. “Only sports can do that.”

It took more than 40 years, but sports has done that for Titus and Luikart, enabling a friendship that wouldn’t have existed otherwise, and now is affecting a new generation.

“People say, ‘What a great thing you’ve done for Willie Mack.’ Well, it’s really just the opposite,” Luikart said. “He’s brought a gift of inspiration to our family. He’s made our grandchildren different. … They’ve gotten to know a black man who is somebody of character, so they won’t be afraid as they move forward.”

In late April, Titus finally was well enough to return home. John Naquin, a friend of both men, said the departure visibly affected Luikart. But the doctor has come to accept it.

“He’s basically gotten his life back,” Luikart said. “From the day he walked into the office until this moment, this is the best I’ve ever seen him look. So, the future is for him to lead the life he wants to lead. He may not be physically here, but he’s part of our family for the rest of our lives.”

Health experts advise it. The governor says we should do it. Signs are posted informing everyone of what's expected.