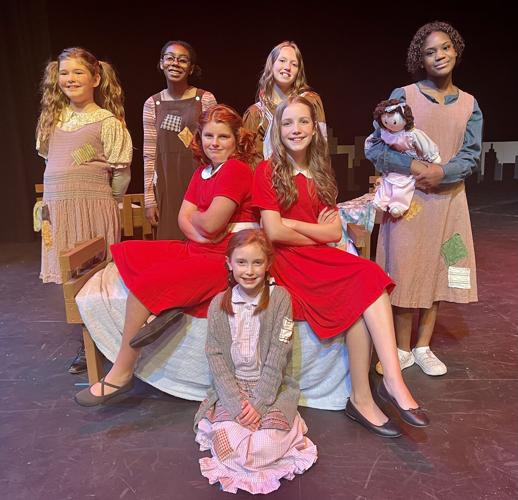 Top row, from left, orphans Laney Wingate as Tessie, Terrolyn Woodridge as Pepper, Lilly Keyser as July and Kristin Robinson as Kate; second row, Adelaide Overall and Grace Noel, both as Annie; and bottom, Riley Keranen as Molly are in the cast of Playmakers of Baton Rouge's musical, 'Annie Jr.,' opening Friday. 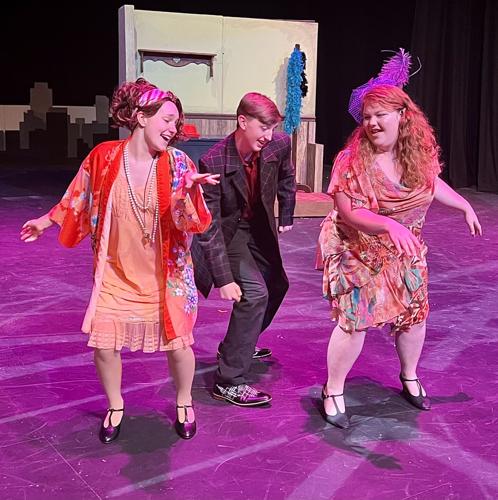 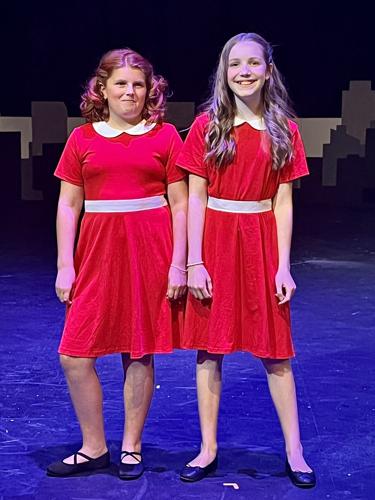 Playmakers of Baton Rouge has double cast the lead role of Annie with Adelaide Overall and Grace Noel alternating performances. 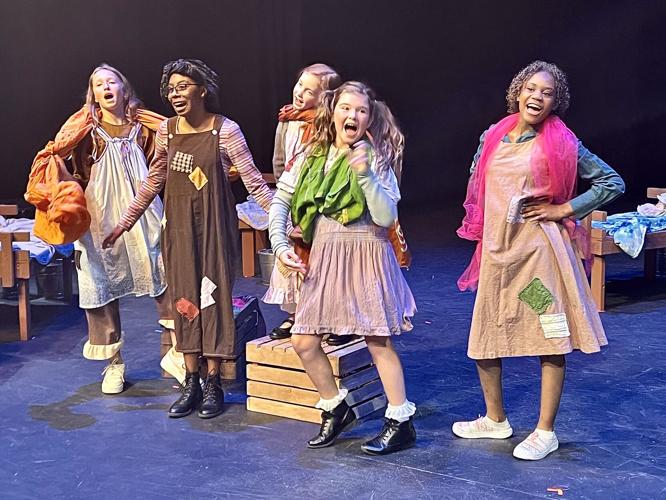 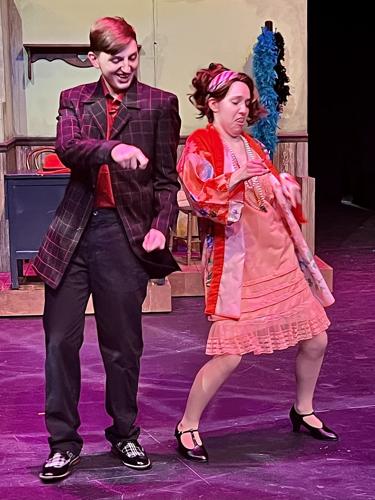 Logan Burge, left, as Rooster Hannigan and Molly Bush as his sister, orphanage director Miss Hannigan, dream of living on 'Easy Street' through a plot to kidnap Annie in Playmakers of Baton Rouge's 'Annie Jr.' 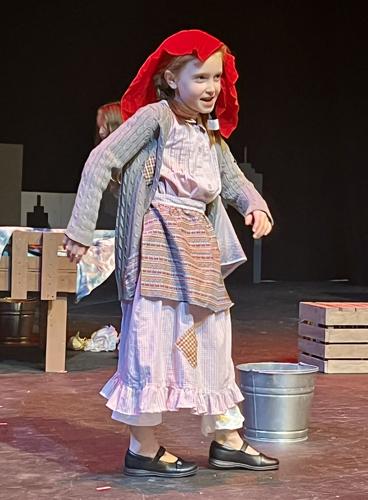 Riley Keranen as Molly does her imitation of Miss Hannigan in 'Annie, Jr.' 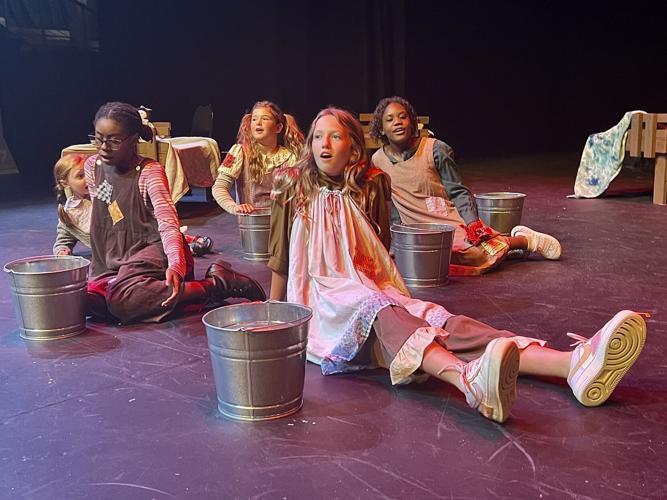 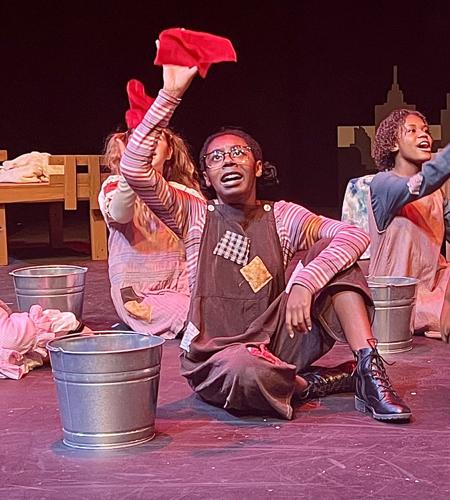 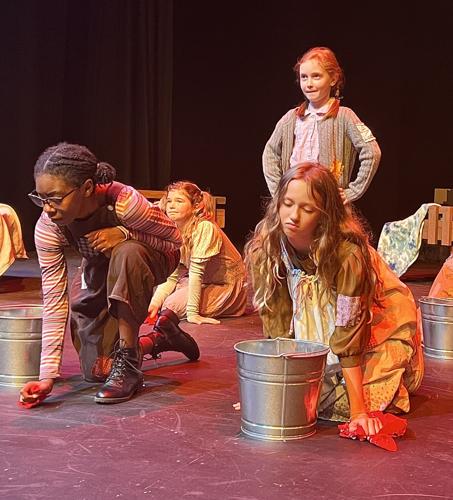 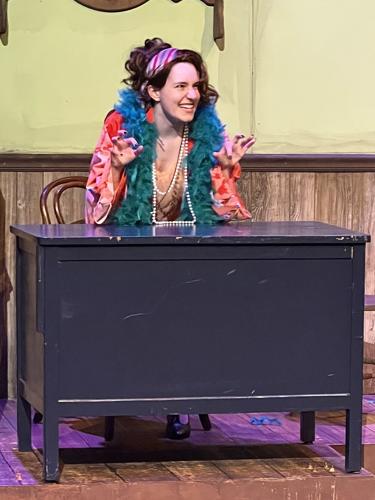 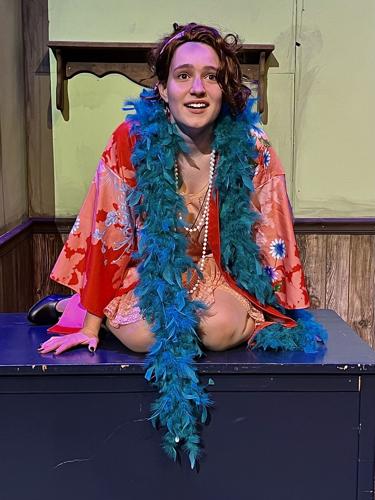 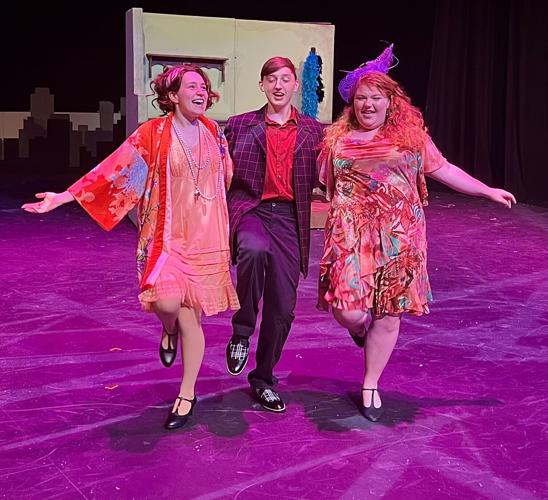 That was in 2008. Fourteen years later, Henry is the company's executive director heading an all-kid cast of the same show.

Make that almost the same show. Playmakers will be opening the "Annie, Jr." version of the musical on Friday in the Reilly Theatre.

Don't worry: Annie will still be the same orphan who finds her way out of the hopelessness of Miss Hannigan's orphanage to melt Oliver Warbucks' cold billionaire's heart.

And the redheaded orphan will sing about "Tomorrow." No production of this musical could be staged without that.

"Annie, Jr.," as are all Music Theatre International's "Broadway Junior" productions, is designed for younger performers through condensed, author-approved versions of classic musicals. The music is written in keys appropriate for developing voices, and all shows can be expanded to accommodate as many performers as can fit on the stage.

So, there may be a few shortcuts, but Miss Hannigan; her conniving brother, Rooster; and his girlfriend, Lily St. Regis, will still conjure some toe-tapping while scheming to kidnap Annie in "Easy Street."

They're respectively played by Molly Bush, 16; Logan Burge, 16; and 14-year-old Clare Appleby in this show. All three admit that it's fun to play bad guys, especially Bush, who loves the sense of power she has as Miss Hannigan.

"There's just something about standing on that desk while the girls dance around it," she said, laughing. "Miss Hannigan is a lot of fun to play, because she's so bad. She says anything she wants."

And Miss Hannigan doesn't even try to disguise the disdain she has for the little girls in her orphanage. She especially despises Annie.

The question here, though, is which Annie? Playmakers has cast Adelaide Overall, 11, and Grace Noel, 12, in the main role.

"Both did so well during the auditions that we decided to cast both," said director Brandy Johnson, who also directs the choir program at McKinley Middle Magnet School. "We kept bringing them back. They are both so strong."

Overall and Noel will alternate every other performance between the roles of Annie and her fellow orphan Duffy. The two characters have different personalities, which gives the young actors a chance to flex their thespian muscles.

"Annie is stubborn, and Duffy isn't," Overall said. "Sometimes I have to remember to play Duffy different from Annie. Annie goes after what she wants."

And what does Annie want? A family. Her wish is to find her real parents, and her benefactor, Daddy Warbucks, played by Joey Fields, agrees to help.

Only trouble is his true wish is to adopt Annie as his own daughter.

"Annie" made its Broadway debut on April 21, 1977, in the Neil Simon Theatre. The show is based on Harold Gray's "Little Orphan Annie" comic strip, nationally syndicated in newspapers from 1924 to 2010.

The story opens in New York during the Great Depression. Thomas Meehan, who wrote the musical's book, treated it as an American version of Charles Dickens' "Oliver Twist."

Like Oliver, Annie finds refuge in the home of a wealthy benefactor, but unlike the Dickens character, she clings to the hope that her real mother and father will one day show up to claim her.

Annie's faith is so strong that when her benefactor, who happens to be the wealthiest man in America, offers to adopt her, she asks him to help find her real parents instead.

Warbucks agrees, and offers a whopping $50,000 reward for the whereabouts of Annie's mom and dad. This attracts the unsavory attention of Miss Hannigan, Rooster and Lily, who hatch a plot to kidnap Annie for the reward, which, of course, will put them on "Easy Street."

Annie meets some key characters along the way, including President Franklin Roosevelt. Played by Drew Trahan, Roosevelt finds some "New Deal" inspiration in her message of "Tomorrow," a song she first sings upon meeting her dog Sandy, played by Jaiden Barrow.

That song, along with "Easy Street" and show favorite "Hard Knock Life," was penned by Charles Strouse with lyrics by Martin Charnin.

But again, this Playmakers production is much different from the one it staged more than a decade ago, where adults were cast in adult roles.

"We had so many kids at the audition, and they were all so good," Johnson said. "It was hard to choose."

"Now we have a cast of about 25 kids," Henry added. "And they've all stepped up. They're ready for 'Annie,' and we're excited about that."

Playmakers of Baton Rouge opens its summer musical, "Annie, Jr.," on Friday, June 3, in the Reilly Theatre, Tower Drive on the LSU campus.