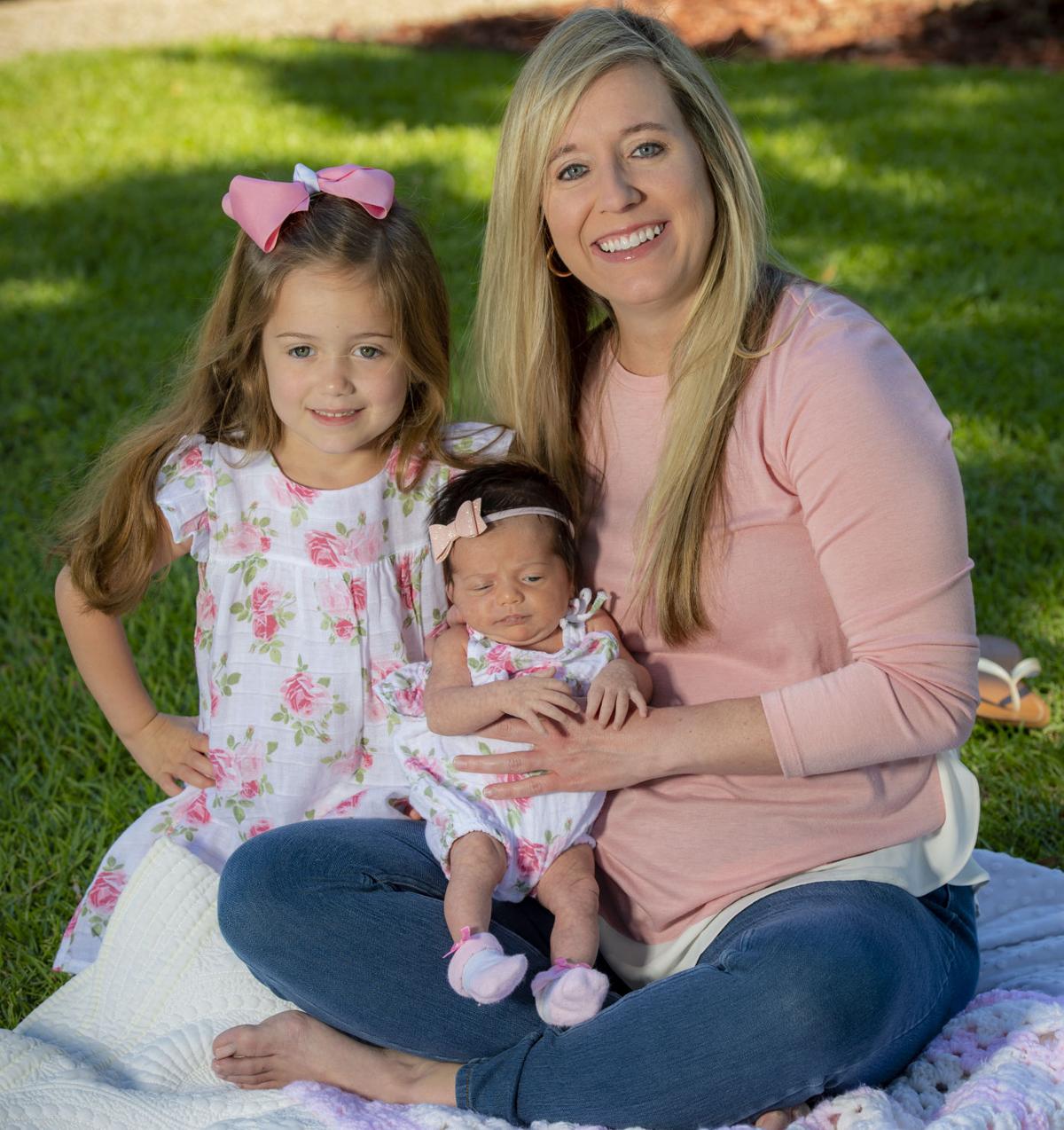 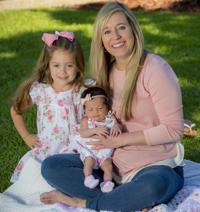 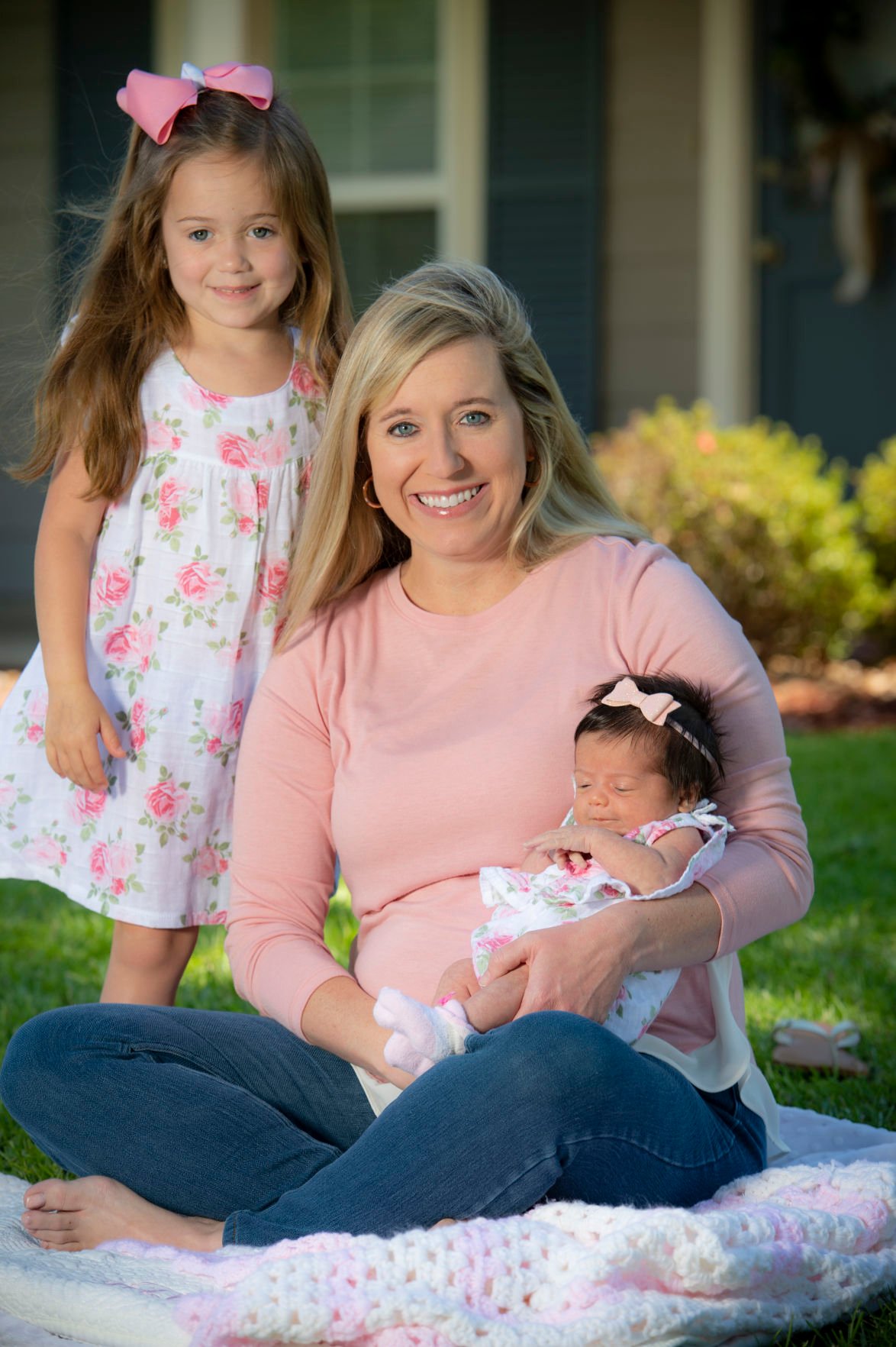 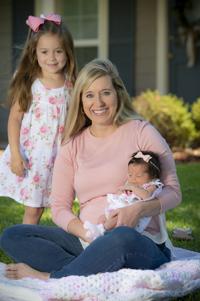 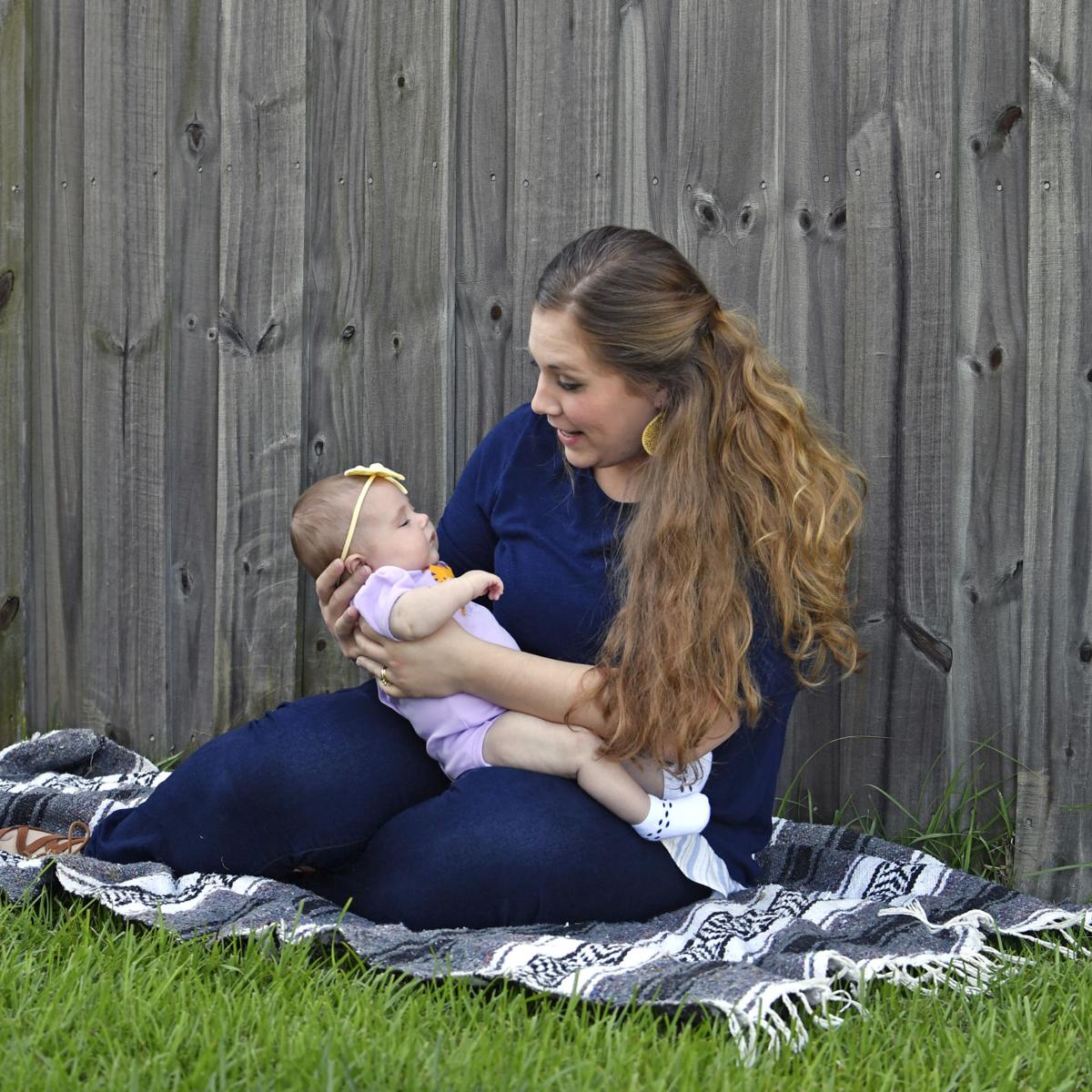 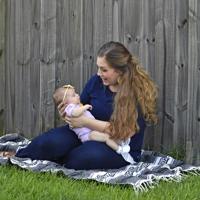 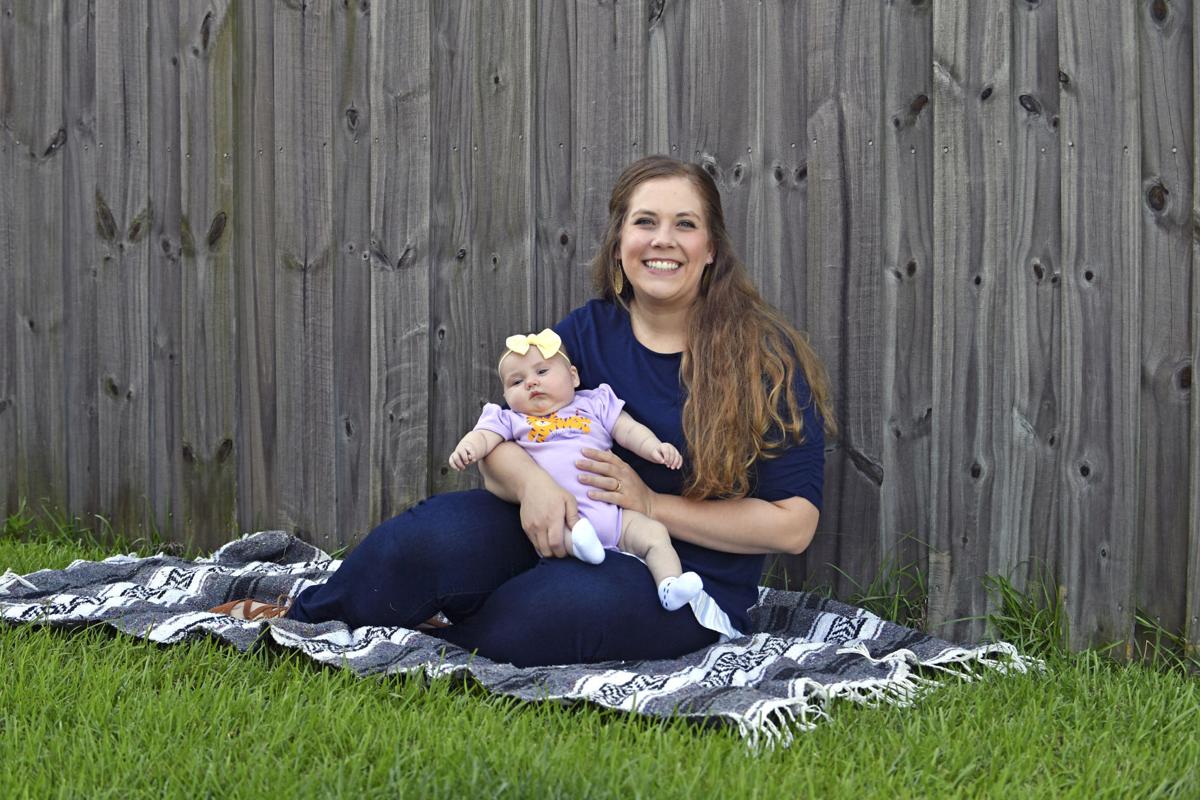 One day, Katie Ruiz will tell Ramie Grace about the fever that separated them for two weeks, and the paralyzing fear that took hold while waiting for the test results.

And soon, hopefully, Melba Jean Fuller will meet in person those who only know her through a computer screen.

Terra Eubanks' children are beginning to learn: When Baton Rouge is in distress, "Mommy goes to work."

Such are some of the stories of this Mother's Day like no other.

For Ruiz, the fear of coronavirus gripped her family shortly after she gave birth on April 2 at Woman's Hospital.

She and husband Tony had done everything right leading up to the delivery.

"Everyone had to check in through the triage unit at the COVID entrance and have their temperature taken and answer questions," Ruiz said. "We did everything they told us to."

The state's stay-at-home order had already been in place for two weeks, and Ruiz changed her birth plan so it would comply with Centers for Disease Control's social distancing guidelines.

She knew only her husband would be allowed in the delivery room, and their soon-to-be-born daughter, Ramie Grace, wouldn't meet the rest of the family until much later.

Abi Bordelon was beyond careful during the final weeks of her second pregnancy as the novel coronavirus spread across Louisiana.

Even Ramie Grace's older sister, 4½-year-old Sidney, wasn't allowed to be there.

"Everyone wore masks during the birth," Ruiz said. "I didn't, but I wore one after I got to the room. This was on a Thursday, and I was allowed to go home on Saturday morning. They were trying to limit our time in the hospital."

And then came Monday morning, when Ruiz awoke with a high fever. She had aches and chills but none of the common symptoms for coronavirus. Still, the symptoms have changed as this disease has evolved, and Ruiz couldn't take a chance.

"I called my doctor and was told to quarantine myself," she said.

Ruiz was tested for the virus, and then came the excruciating wait for the results. Having to be separated from her newborn made it worse.

"Those first two weeks are the most important for the bonding between a mother and baby, and I was afraid Ramie and I were going to miss this," Ruiz said. "I had to stay in my bedroom and pump breast milk, and either my husband or my mother, who was staying with us, would feed Ramie."

Taking mom out for lunch or dinner is a Mother's Day tradition, but those plans will have to be revised this year.

Ruiz couldn't help but question her doctor about the breast milk. She thought that if she had the virus, surely her daughter would be exposed to it through her milk.

"My doctor said my breast milk wouldn't be infected," Ruiz said. "As long as I didn't have contact with Ramie, she wouldn't catch it."

In addition to Ramie, the new mom also was separated from her other daughter, her husband and her mom.

But she dutifully stayed holed up in her bedroom and waited, fighting through all the "what ifs."

Fortunately, the test results came back negative. Her fever had been caused by mastitis, a breast tissue infection.

Ruiz was reunited with baby and daughter on Easter Sunday and has only had contact with her husband and mom since. Even her in-laws in Gonzales have yet to meet Ramie Grace.

But that will change soon. Ruiz and her family are spending Mother's Day weekend in Orange Beach, Alabama, with her mother-in-law, sister-in-law and nieces and nephews.

Walker: As we celebrate Mother's Day, let's not forget those dealing with their first one without the real MVPs

It was by far the toughest Mother's Day of my life.

"The beaches reopened last week, so we made a last-minute decision to get out of town for a long weekend," she said.

It not only will be a chance for her to celebrate motherhood but also family.

The good news for Marissa Fuller, new mom to Melba Jean, was that the coronavirus threat had not yet locked down the nation when the baby was born on Feb. 21. Fuller's husband, David, was able to be there for the birth and her mom stayed the first two weeks. Her sister also visited, as did some of her husband's relatives.

But the baby wasn’t yet a month old when everything changed. David Fuller, a controls engineer, was working a turnaround at the Marathon Petroleum Garyville refinery, and his work hours meant he couldn’t help with shopping when grocery stores shortened their hours.

“That was something that would have been different if we could have had somebody come over and watch the baby while I did grocery shopping,” Marissa Fuller said. “It was hard to decide: Was it better to bring the baby or have somebody come? Which threat is worse or better?”

So, she would strap on Melba Jean's carrier, cover the baby’s head and use Lysol wipes on herself and everything she touched. To make things worse, panic buying had emptied store shelves of things she needed for her daughter.

“It was scary to not know if we’d find the preferred formula, or any formula,” she said. “We had family members send us formula they could find in the stores in their town just to be sure we’d have some. A container of formula does not last long, so it was scary to imagine what would happen if we ran out and couldn’t find more. Thankfully, that never became a reality.”

'It feels so good': Coronavirus survivor reunited with her family after 47 days in hospital

Forty-seven days after coronavirus patient Tera Greene was admitted to the hospital in critical condition, she wept and praised God as she was…

Now that the turnaround is over, David Fuller works from home, and one parent can shop while the other looks after their daughter.

Yet, many of the joys of early parenthood are having to be deferred. Friends who want to see the baby are having to make do with photos posted on social media.

“That’s been kind of sad. Her first Easter, we were at home,” Marissa Fuller said. “That’s something we had been excited about, her first Easter. We had a cute, little dress picked out to take our pictures. We just stayed home and watched church on our phones.”

On the plus side, Melba Jean has had plenty of time to bond with her parents. It makes her mother wonder what kind of separation anxiety will take place when outside child care inevitably becomes necessary.

“We can’t do anything about that, because we can’t have other people come and take care of her," she said, "but that’s going to be something that probably a lot of parents will have to encounter after this time.”

And so it is with Mother's Day, which the Fullers anticipated would be shared with family and friends. They will probably stay home, Marissa Fuller said. Par for the course in 2020.

“The expectations for the first few months of her life, what we thought they would look like, are probably a little bit different,” she said.