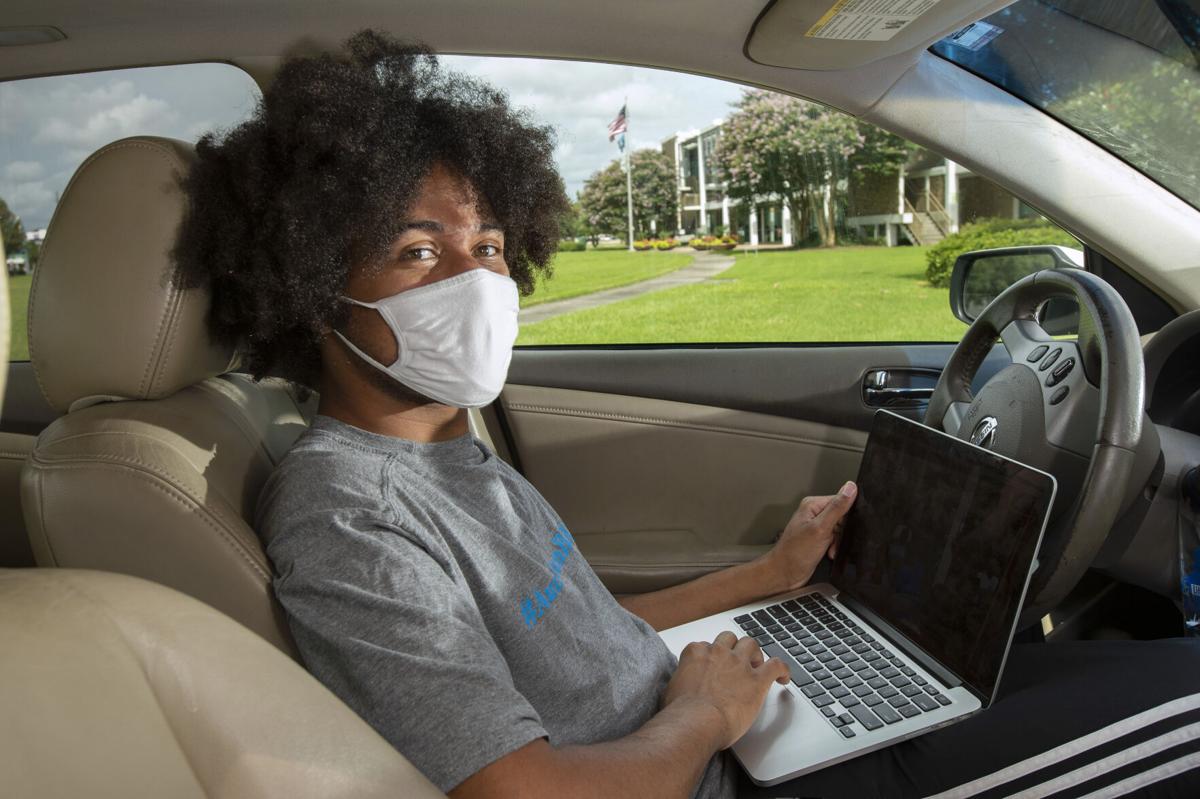 Community organizer and activist Emanuel 'Boo' Milton persuaded BREC to provide free, enhanced WiFi at six of its locations to provide parking lot internet use to people who can't afford the internet at home. Here, he's online with his laptop in his car outside one of the sites, the BREC administration building. 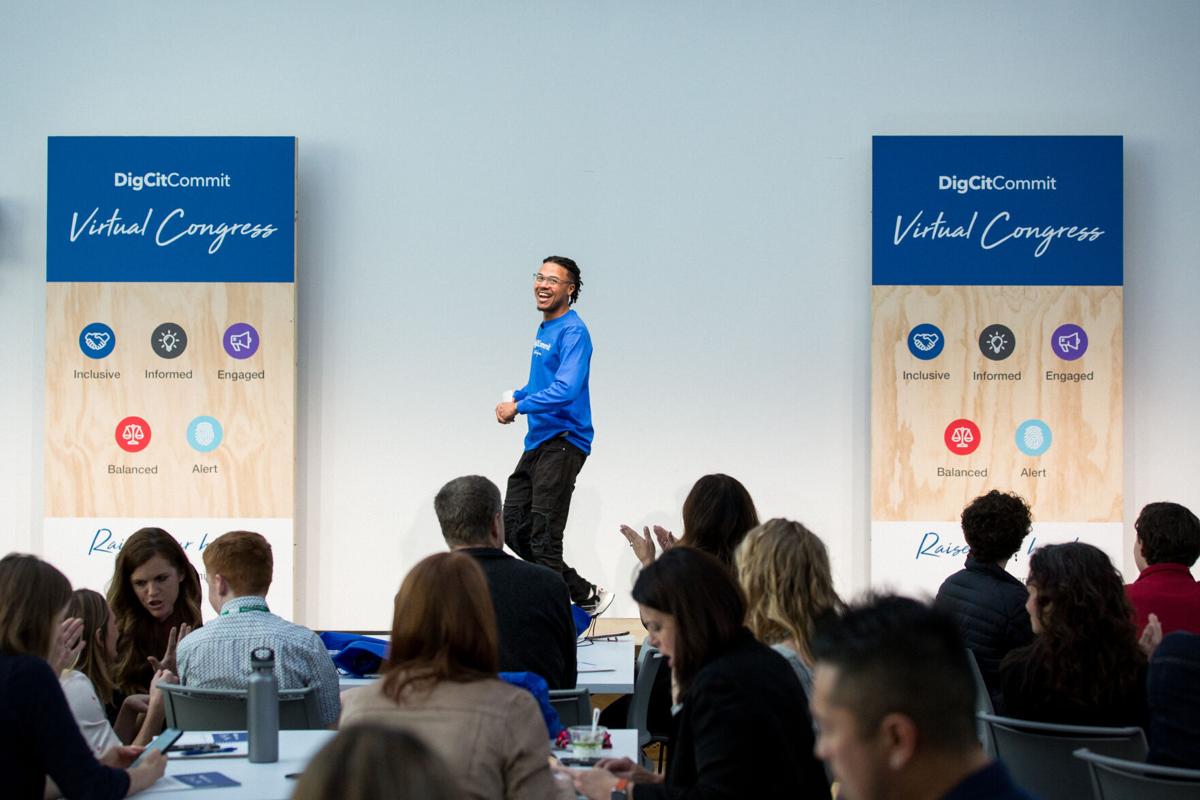 Emanuel 'Boo' Milton was one of the speakers at the Digital Citizenship Conference earlier this year at Facebook headquarters in California.

Community organizer and activist Emanuel 'Boo' Milton persuaded BREC to provide free, enhanced WiFi at six of its locations to provide parking lot internet use to people who can't afford the internet at home. Here, he's online with his laptop in his car outside one of the sites, the BREC administration building.

Emanuel 'Boo' Milton was one of the speakers at the Digital Citizenship Conference earlier this year at Facebook headquarters in California.

If you notice people driving to certain public parks and not getting out of their cars, there’s a simple explanation: Emanuel “Boo” Milton came up with another idea to help people.

Milton, a 25-year-old event planner and public speaker, has spent a lot of his young life trying to make things better in Baton Rouge, particularly for the disadvantaged. Some of it gets noticed nationally, as when Milton appeared on “Live with Kelly and Ryan” to talk about his summer outreach to school children. Other initiatives fly under the radar — but not under the internet.

“Whatever I feel in my heart and spirit to do, I go toward it,” said Milton, who describes himself as a community organizer. “I advocate for things that are near and dear to my values, such as youth and education.”

Milton thought of a simpler solution. BREC has Wi-Fi at many of its parks, a basic service that’s free, with higher-speed access available for a fee. He approached the parks commission about making its higher-speed Wi-Fi free at certain sites. BREC agreed, and people now can drive up and go online for free at the BREC administrative building, Anna T. Jordan Community Park, Highland Road Recreation Center, Gus Young Recreation Center, North Sherwood Recreation Center and the Sports Academy Center from 2 p.m. to 6 p.m. Sundays, 9 a.m. to 8 p.m. Mondays through Thursdays and 9 a.m. to 6 p.m. Fridays and Saturdays.

Live long and prosper: Louisiana siblings have lived well into their 90s. What's their secret?

Milton thinks the service is especially valuable during restrictions imposed by the coronavirus pandemic.

“It gives people the mental break that they need,” he said. “Tensions get very high because everybody doesn’t have a stable living condition. That’s the reason why these Wi-Fi centers are not just in low-income neighborhoods. They’re in all neighborhoods.

“Somebody might not have the most quiet house. They might just need to go out. It’s not just about having internet access. It’s about having a place where they feel safe and maybe can enjoy the internet by themselves or maybe they just need a break from being in the house with a lot of kids or a lot of adults.”

Coronavirus is causing rifts over masks, physical distancing and more. Experts offer 6 ways to talk about it

Milton’s most recent effort is the Spark Box Initiative. Knowing that summer enrichment programs for school children have been canceled because of the pandemic, Milton created a kit that offers a craft and activities to challenge their thinking skills. The Spark Boxes also encourage the children to write a daily log about how they’re feeling, something parents can use to keep track of their emotional well-being.

Funds from the mayor’s office, a grant from ExxonMobil and money Milton's raised pay for the boxes. He’s given out 600 of them every other weekend — 2,400 in all. He’s held the giveaways at BREC’s administrative building parking lot, with public service announcements in local media spreading the word.

If disaster strikes, are you ready? Here's some steps older folks should take now

“Spark Box is brilliant,” said Destiny Cooper, an instructional coach for five local high schools who met Milton in 2013 when she taught English at McKinley High School. “He knows what kids need. He’s never lost touch with his roots, so that helps him to understand what kids in his community need. He stays in touch with them. He’s such a great person. He really loves and cares about everybody.

“He started Spark Box as a way to keep kids engaged. He knew that a lot of kids in Baton Rouge don’t have access to Wi-Fi or don’t have the tools that they need, so that’s why he created the box version of it to give them activities to do at home.”

Milton’s previous initiatives include dodgeball tournaments to raise money for local charities, a conflict resolution program for fifth graders and Give Back Weekends that provided free vision screenings, haircuts and manicures. He served on Mayor-President Sharon Weston Broome’s transition team and on a council created to look at Baton Rouge Police Department practices following the shooting death of Alton Sterling in 2016. He’s also had national platforms, speaking at the Digital Citizenship Conference in February at Facebook headquarters in California and serving on the advisory board of Cities United, a national organization of mayors seeking to reduce murders among African American men and boys.

“I wouldn’t be surprised to learn that Boo is already working on another idea to serve the community and look forward to seeing what he comes up with next,” said Cheryl Michelet, BREC communications director.