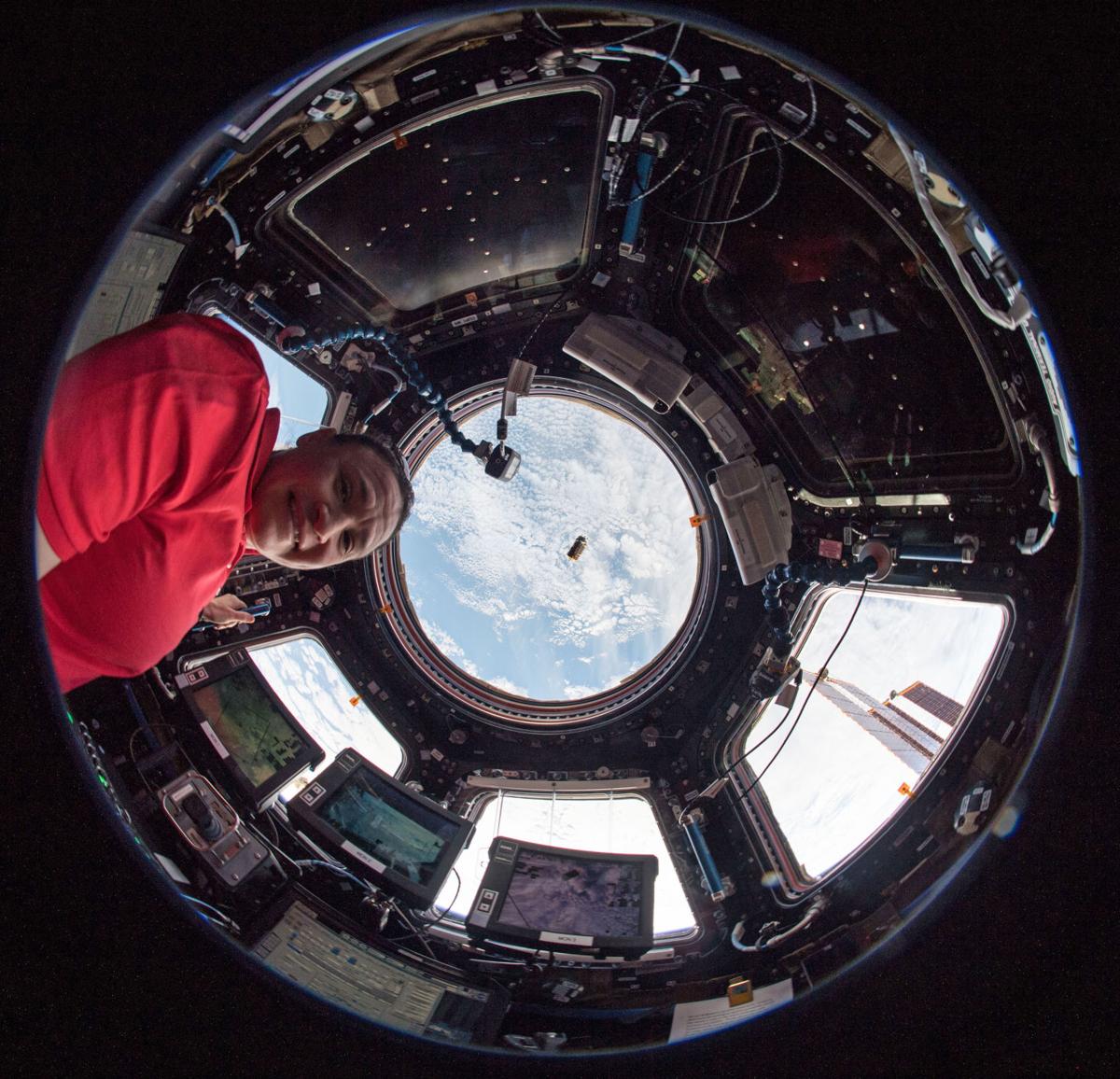 During her six months aboard the International Space Station as a flight engineer, Dr. Serena Auñón-Chancellor monitored the arrival of the H-II Transfer Vehicle-7. 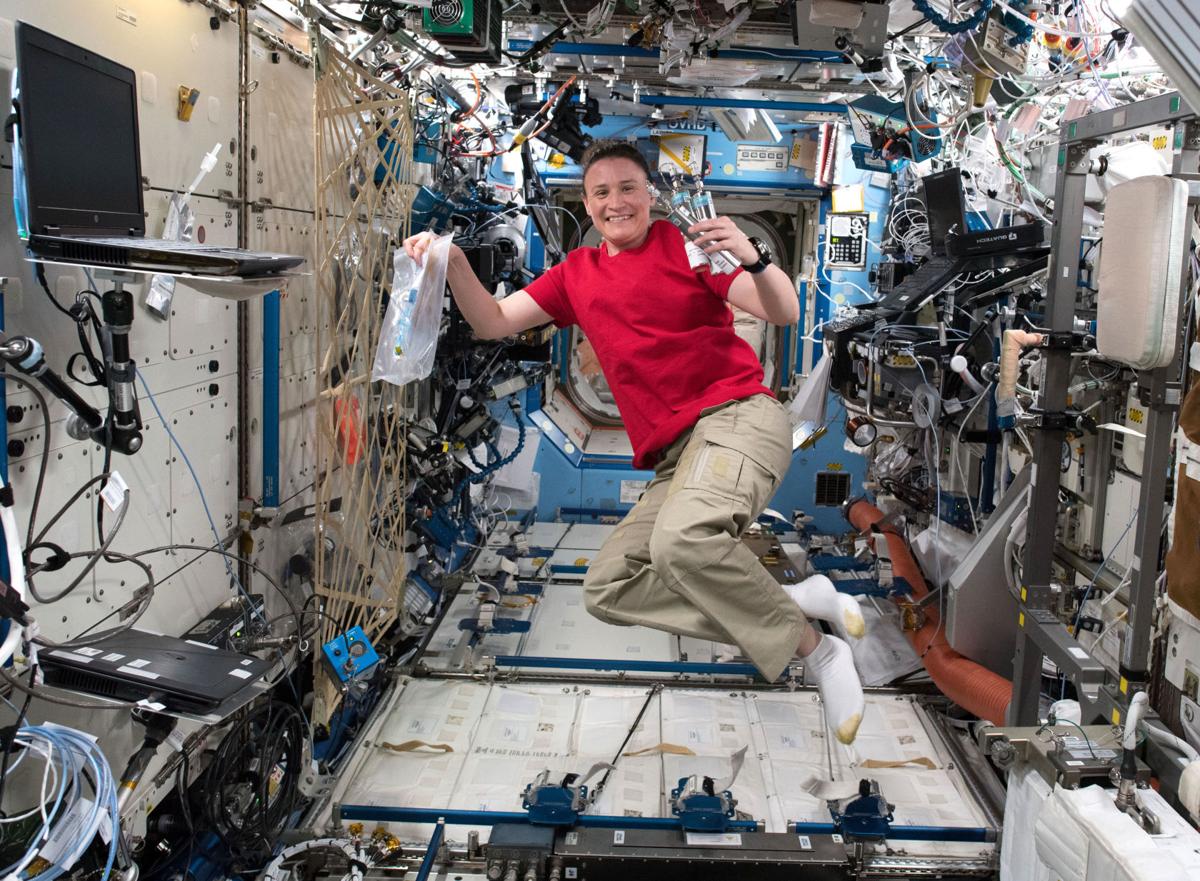 'You're this very ungraceful ballerina, floating into things, tumbling into things,' says NASA astronaut Dr. Serena Auñón-Chancellor of the weightlessness she experienced in her six months on the International Space Station. She now teaches at the LSU Health Sciences Center's Baton Rouge campus. 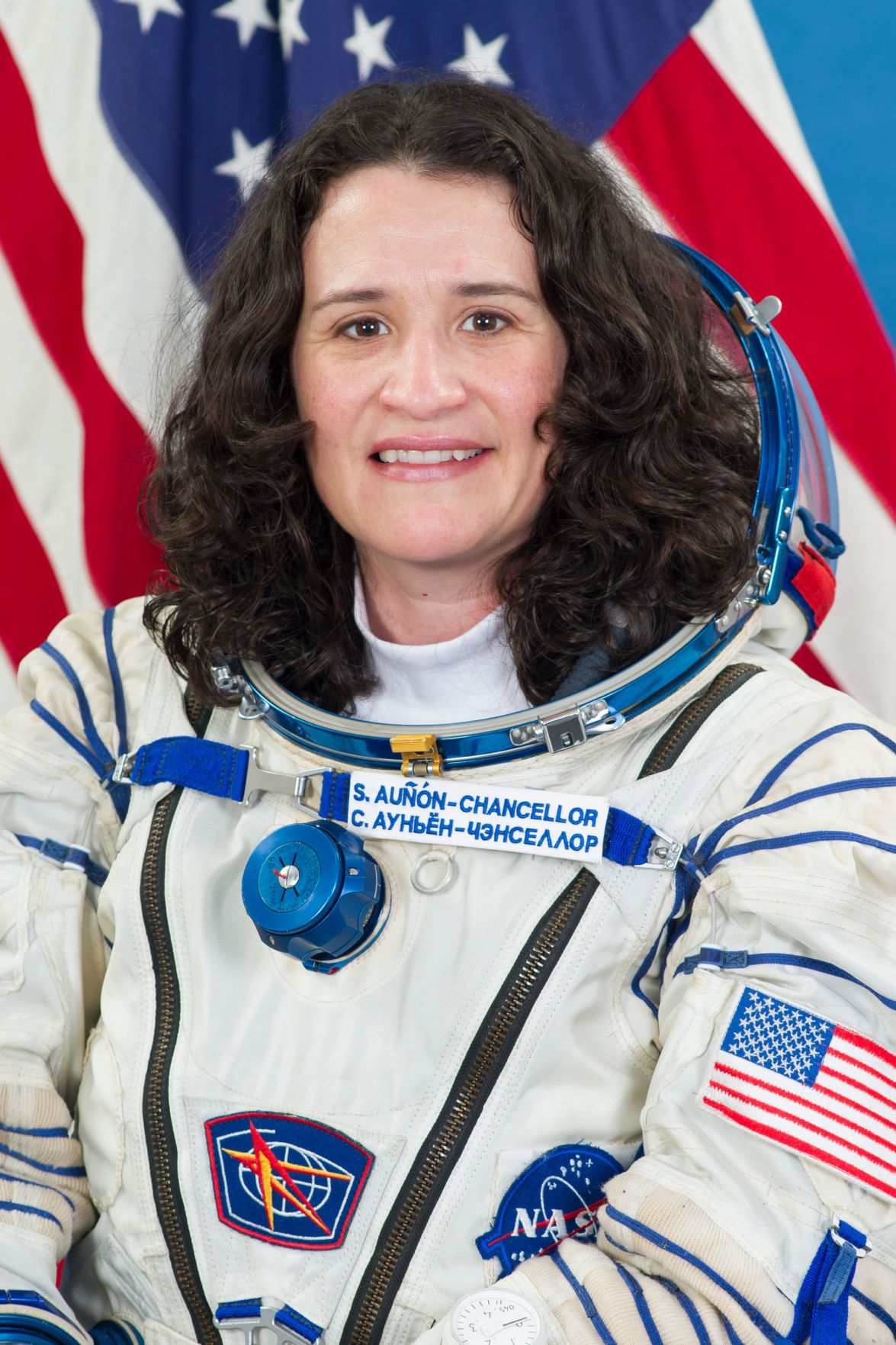 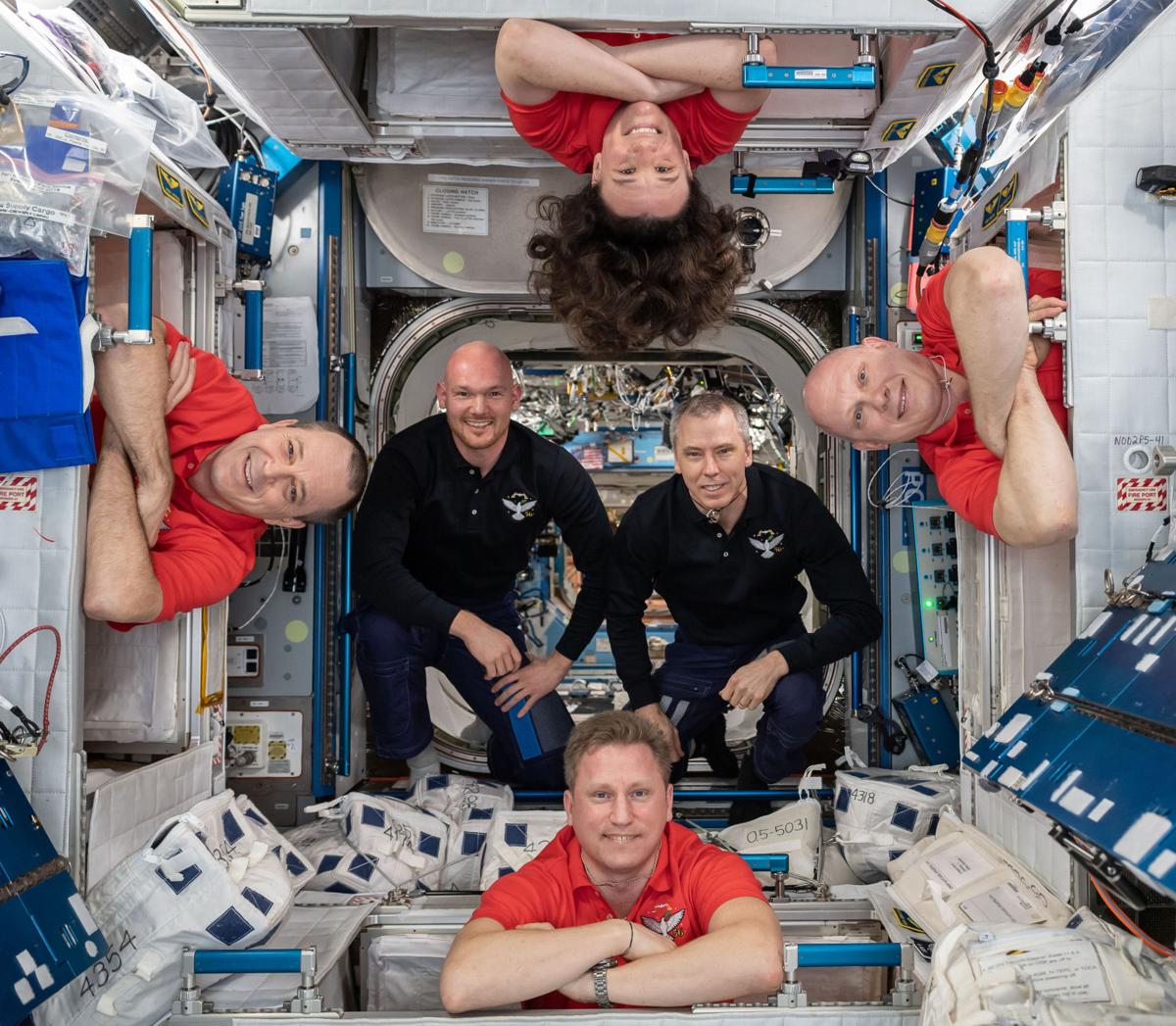 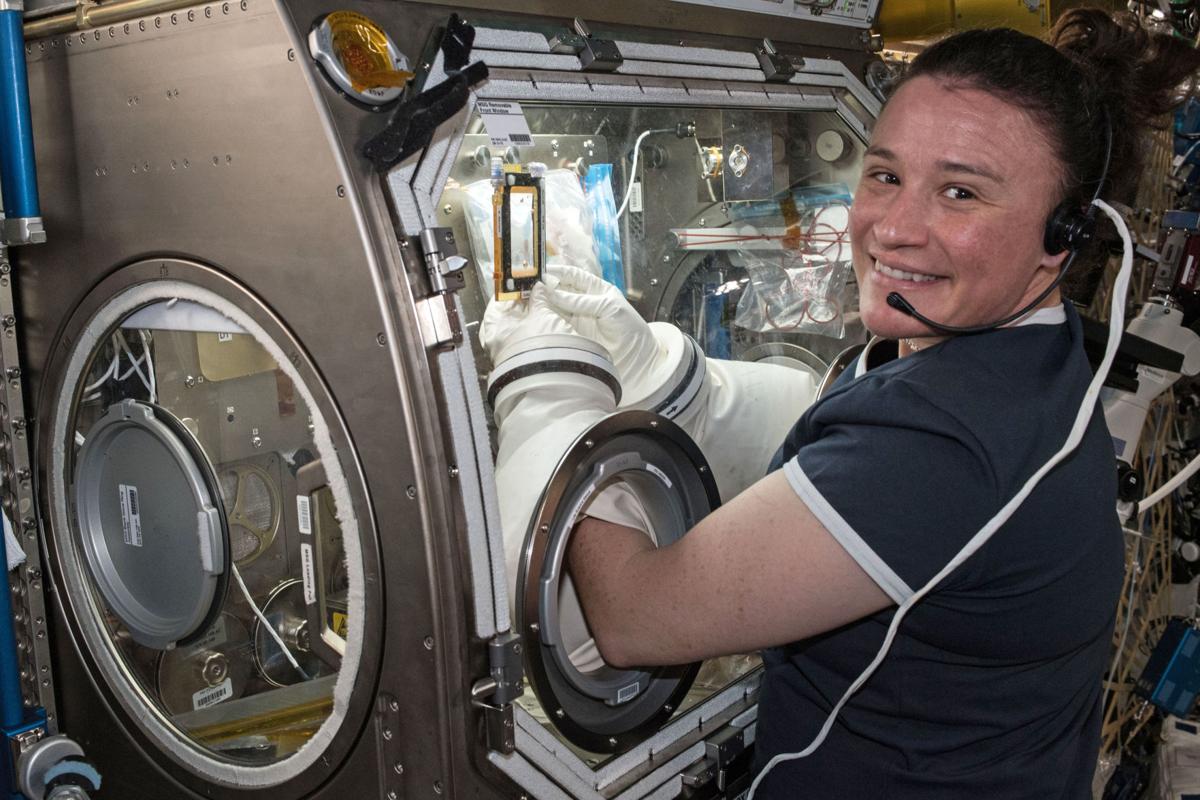 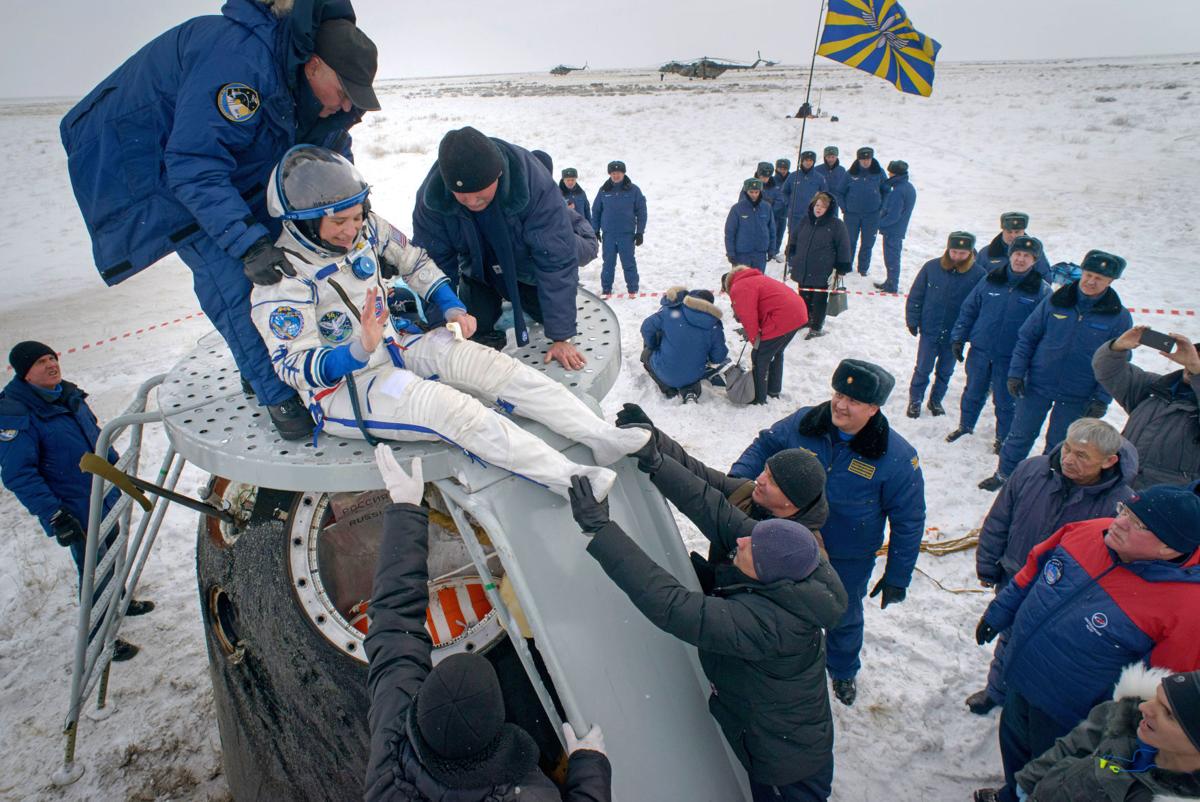 On Dec. 20, 2018, NASA astronaut Serena Auñón-Chancellor is helped out of the Soyuz MS-09 spacecraft just minutes after she and Alexander Gerst, of the European Space Agency, and Sergey Prokopyev, of Roscosmos, landed in a remote area of Kazakhstan. The three spent 197 days on board the International Space Station. 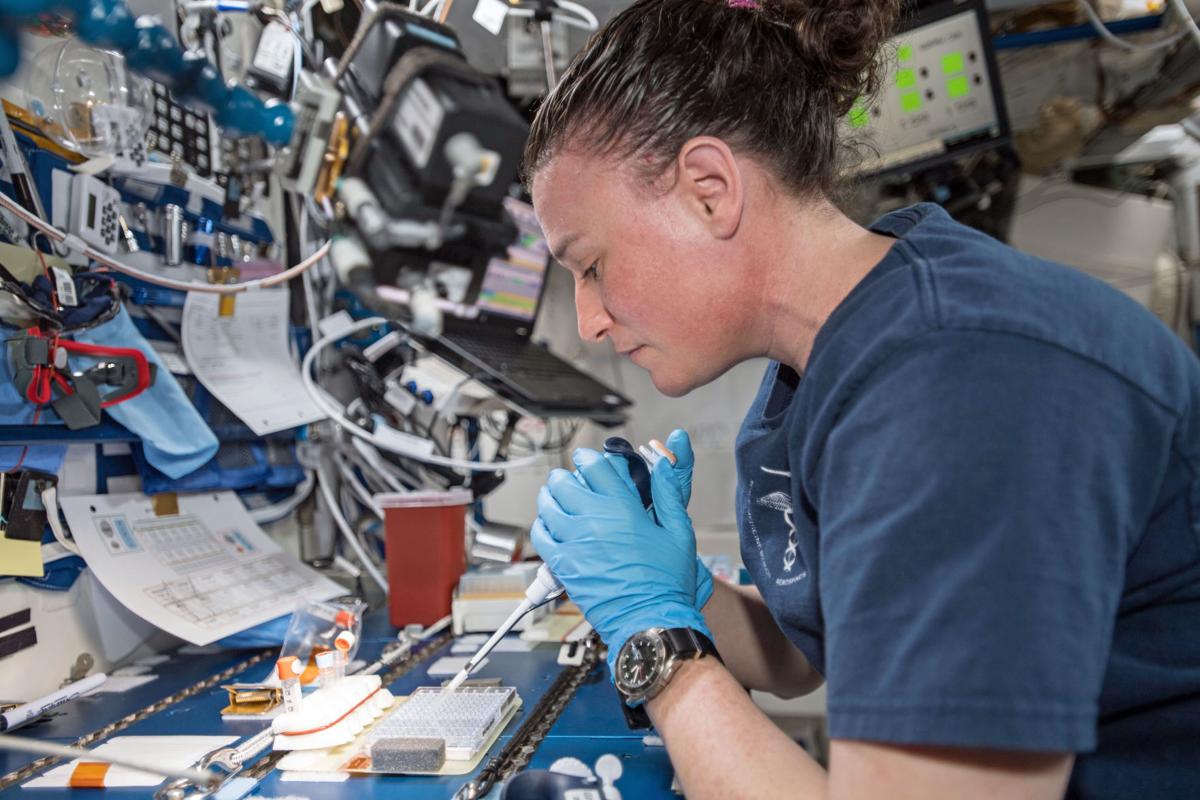 During her six months aboard the International Space Station as a flight engineer, Dr. Serena Auñón-Chancellor monitored the arrival of the H-II Transfer Vehicle-7.

'You're this very ungraceful ballerina, floating into things, tumbling into things,' says NASA astronaut Dr. Serena Auñón-Chancellor of the weightlessness she experienced in her six months on the International Space Station. She now teaches at the LSU Health Sciences Center's Baton Rouge campus.

On Dec. 20, 2018, NASA astronaut Serena Auñón-Chancellor is helped out of the Soyuz MS-09 spacecraft just minutes after she and Alexander Gerst, of the European Space Agency, and Sergey Prokopyev, of Roscosmos, landed in a remote area of Kazakhstan. The three spent 197 days on board the International Space Station.

Auñón-Chancellor joined the faculty at the LSU Health Sciences Center’s Baton Rouge campus last October. Just over a year ago, she was on a six-month assignment aboard the International Space Station, orbiting 350 miles above Earth and conducting scientific research. Today, she trains internal medicine residents.

“I love what I’m doing. I love that I’m back in academic medicine here,” Auñón-Chancellor said. “Right now, I love being back on Earth. It’s really nice.”

She is one of the few people who can say “back on Earth” quite so literally.

A researcher at the Baton Rouge branch of the LSU Health Science Center was the lead author of a paper describing a blood clot risk in astronauts.

Auñón-Chancellor, 43, grew up in Indianapolis, Indiana, and became fascinated with space flight as a child. Seeing her interest, her father advised her to become an engineer. She attended Space Camp in Huntsville, Alabama, when she was 16 and later enrolled in electrical engineering at George Washington University.

Following the lead of several engineering classmates, she added pre-med classes to her schedule. After getting her engineering degree, she was put on a waiting list before being accepted to the University of Texas Health Science Center.

“Someone took a chance on me, basically,” she said. “That’s how they saw it at the time. What I love to tell people is scores don’t tell your potential. They never have.”

In her fourth year of medical school, Auñón-Chancellor saw an advertisement for an aerospace medical clerkship at the Johnson Space Center. She got it, going on to a three-year residency and a master’s degree in public health at the University of Texas Medical Branch.

Auñón-Chancellor was selected as an astronaut candidate in 2009. Preparation included wilderness survival training in case the astronauts crash the jets they are taught to fly. She was sent to NASA’s NEEMO laboratory, living in an underwater facility and simulating spacewalks. She spent two months in Antarctica as part of a team identifying meteorites for study.

“The training is complex, high-risk sometimes,” she said. “NASA likes to put you in very uncomfortable situations for a good portion of your training, and that’s because if the first time you’re uncomfortable is on the Space Station when you’re docking a billion-dollar vehicle or performing very complex maintenance or doing a spacewalk, that’s not the time to panic.

“Antarctica is cold. It’s a very extreme environment. You step outside without the (right) gear, it’s going to kill you," she said. "Space is the same. When you go on a spacewalk, if you step outside with the wrong gear, if you’re not attentive to every detail of your equipment, it will kill you, no question.”

Our Views: La. must help America return to the moon

Later this month, Americans will celebrate the 50th anniversary of humanity’s first landing on the moon.

Auñón-Chancellor and two others were launched aboard a Russian Soyuz rocket to the International Space Station on June 6, 2018. She wasn't there as a physician. Auñón-Chancellor performed maintenance on the station and conducted scientific experiments with the rest of the crew.

Those included cancer therapy trials and experiments for Parkinson’s disease research. The microgravity of orbit 220 miles above the Earth creates research opportunities that can’t be duplicated on the ground, she said.

“What people don’t realize is that … 70% of that is to specifically benefit health down here,” she said. “It’s not for space flight.”

The International Space Station is as large as a five-bedroom house, Auñón-Chancellor said, so the astronauts aren’t cramped.

Weightlessness was disorienting. She had to learn to use her feet to hold on to fixed objects. In her sleeping compartment, Auñón-Chancellor lodged her feet into one corner and had her head touch the other wall so she could feel like she was lying against something.

“You’re this very ungraceful ballerina, floating into things, tumbling into things. Then, as weeks go by, motion … is absolutely effortless,” she said. “You can change your trajectory by a slight touch or push-off on a wall, and it’s almost like being in an airplane the entire time. You can roll and spin and get from one end of the module to the other as beautifully or as fun as you want to, or as not fun as you want to.”

Because the space station orbits at 17,500 mph, the astronauts experience sunrise and sunset every 90 minutes, and the view is spectacular, Auñón-Chancellor said. The astronauts use exercise equipment daily to maintain muscle strength and bone density.

Lying on its side, the 537,000-gallon liquid hydrogen tank at the heart of America’s upcoming space missions looks like a giant pill.

While she was in space, the LSU Department of Physics and Astronomy approached her husband, Jeff Chancellor, about the faculty position that would bring them to Baton Rouge. Auñón-Chancellor’s older sister, Christine, played volleyball at LSU in the 1980s, and she remembered visiting campus and seeing the live tiger mascot. They agreed to discuss it fully when she returned to Earth.

On Dec. 20, 2018, she touched down in Kazakhstan. Although exercise had kept Auñón-Chancellor's muscles strong, six months of microgravity affected her inner ear, so she was carried from the landing capsule to a medical tent to begin getting reoriented to Earth’s gravity.

“You need help with everything,” she said. “Basically, you’re like a newborn baby.”

As her brain and body readapted, Auñón-Chancellor could enjoy simple joys mostly denied her in space. One space station experiment involved growing plants. She occasionally stuck her head inside the growing compartment just to smell the dirt.

“I missed that up there more than anything,” she said. “What I did not realize when I got up there was how much you miss the feel of the Earth. It’s not enough to see it. You have to smell it. You have to feel the wind or the sharp cold or hear the crickets, and a couple of my friends emailed me while I was up there and said, ‘Do you want me to send you a video?’ I said, ‘Yes. Stand on your back patio 20 seconds at night and take a video and just be quiet, and send that to me.’ They did, and it was awesome because I could hear the locusts. I could hear the earth. You really do miss that.”