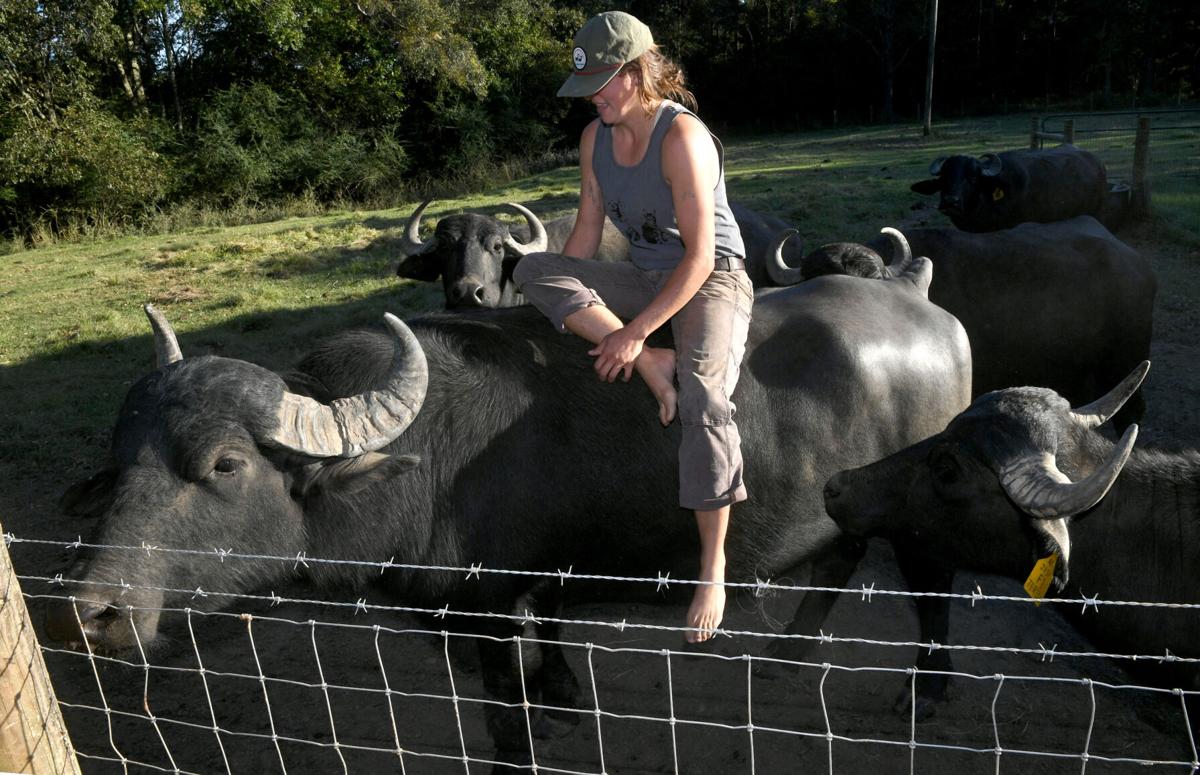 'They’re super sweet. I sit on them like couches. I ride them, more like just lounge on them,' says Sarah Roland of the water buffaloes at Bayou Sarah Farms. 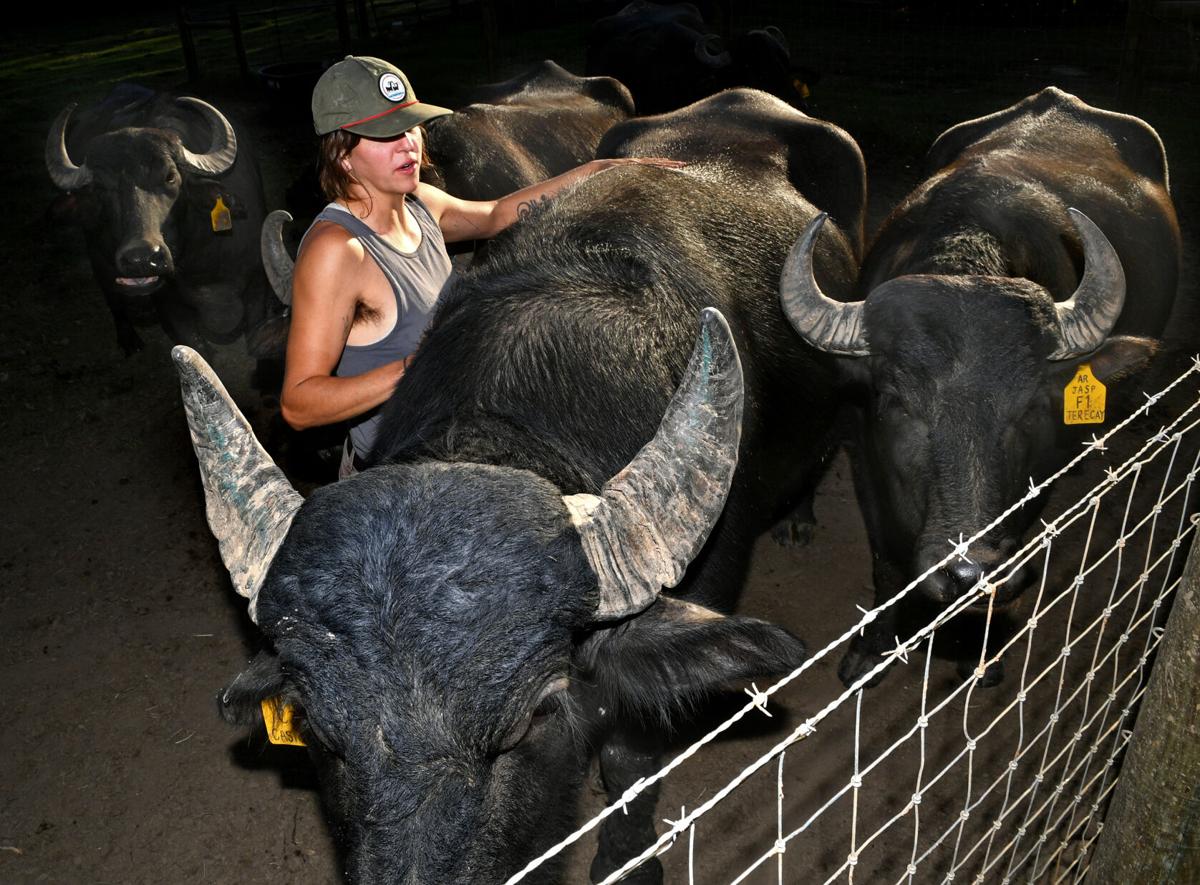 'I come out every night under the stars and hang out with them, play with them,' says Sarah Roland of the water buffaloes at Bayou Sarah Farms. 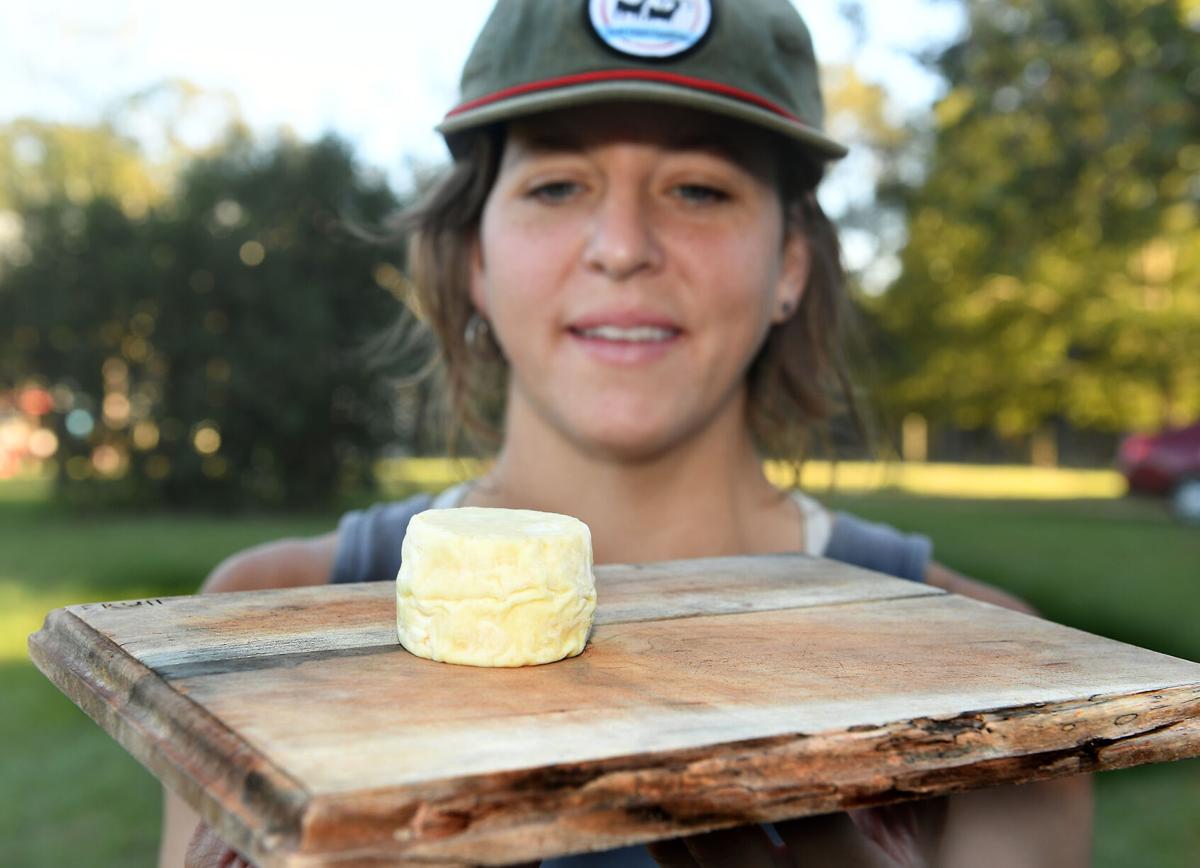 Sarah Roland shows off some of the cheese made from water buffalo milk on Bayou Sarah Farms in West Feliciana Parish. 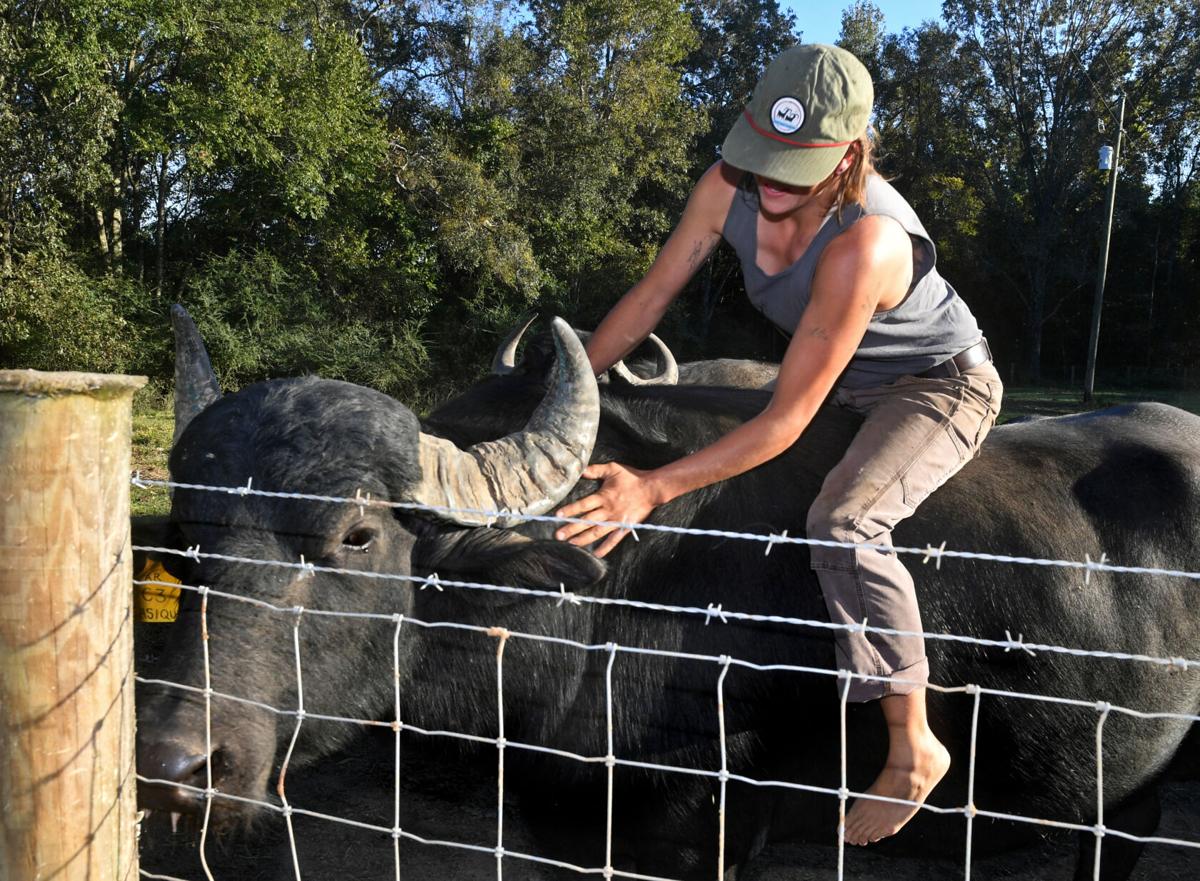 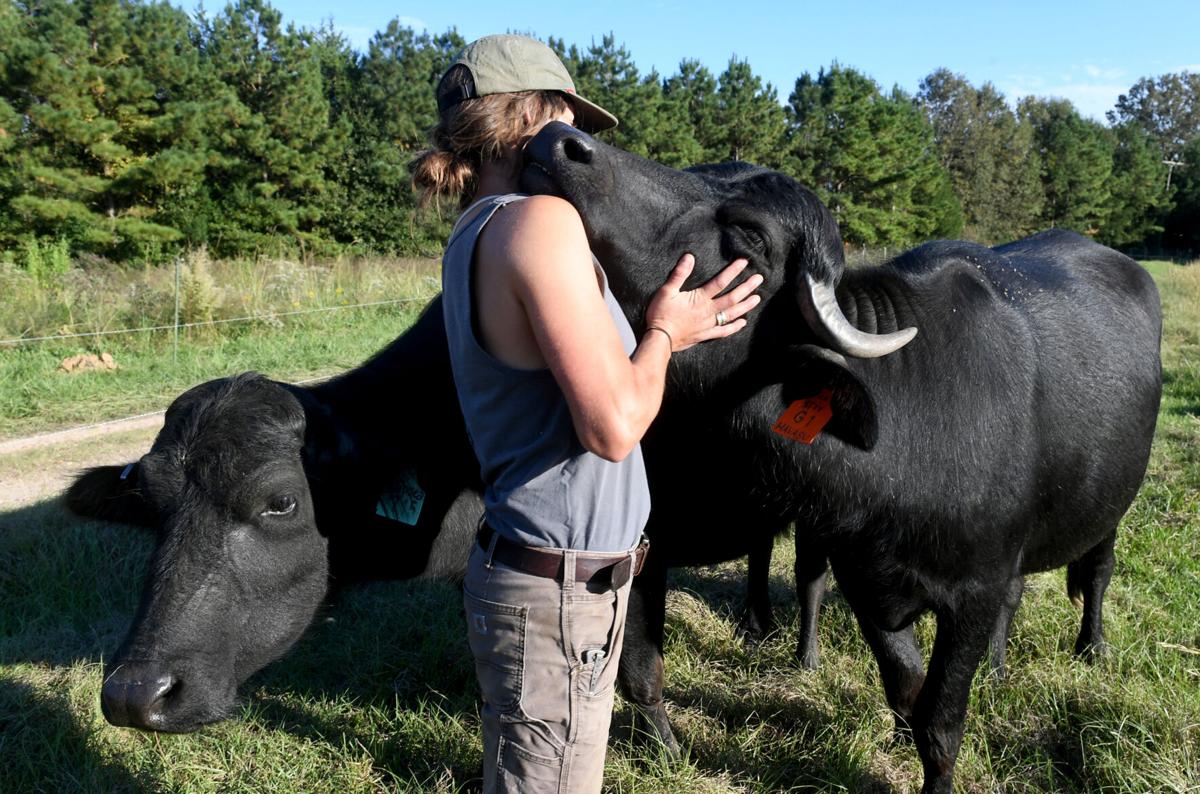 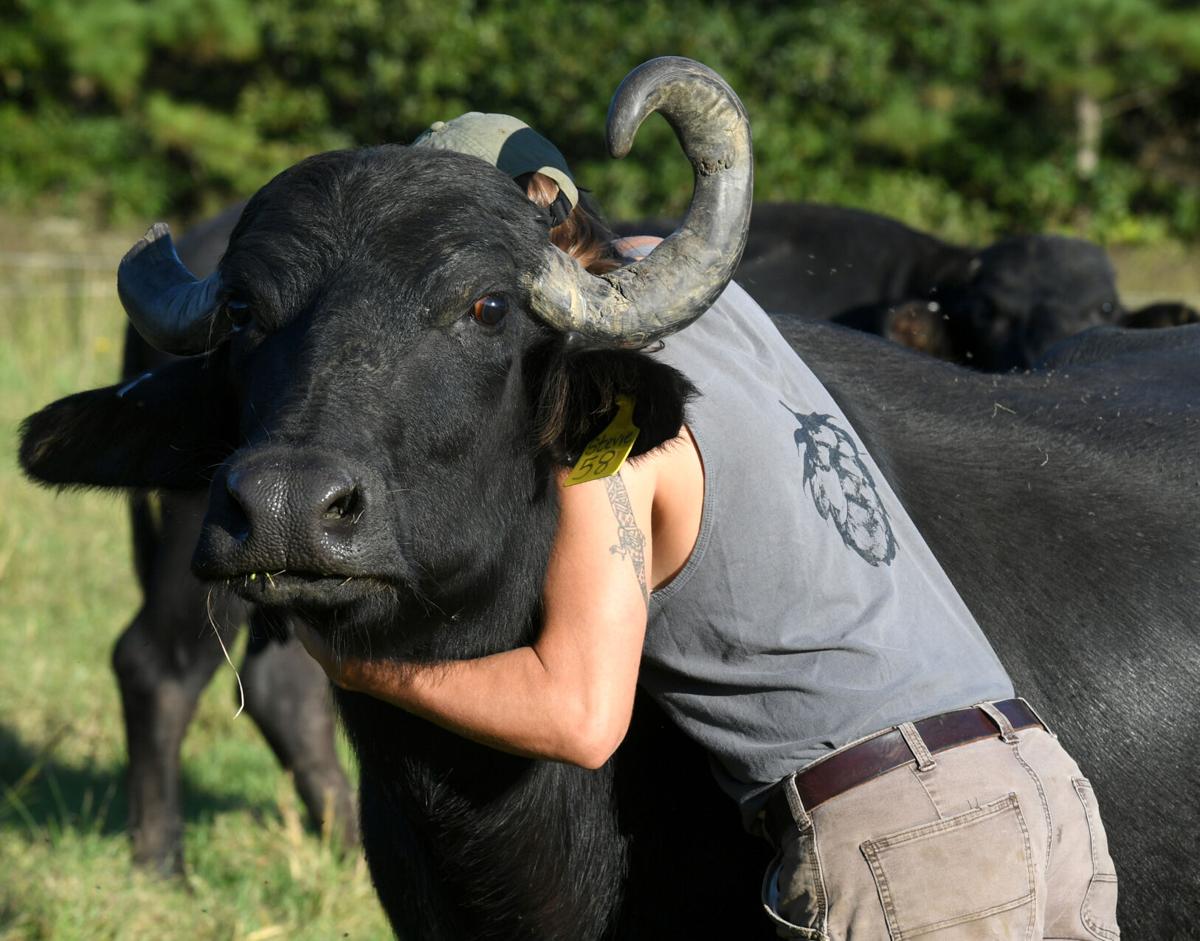 Sarah Roland gives a big hug to Stevie Nicks, one of the water buffaloes at Bayou Sarah Farms. 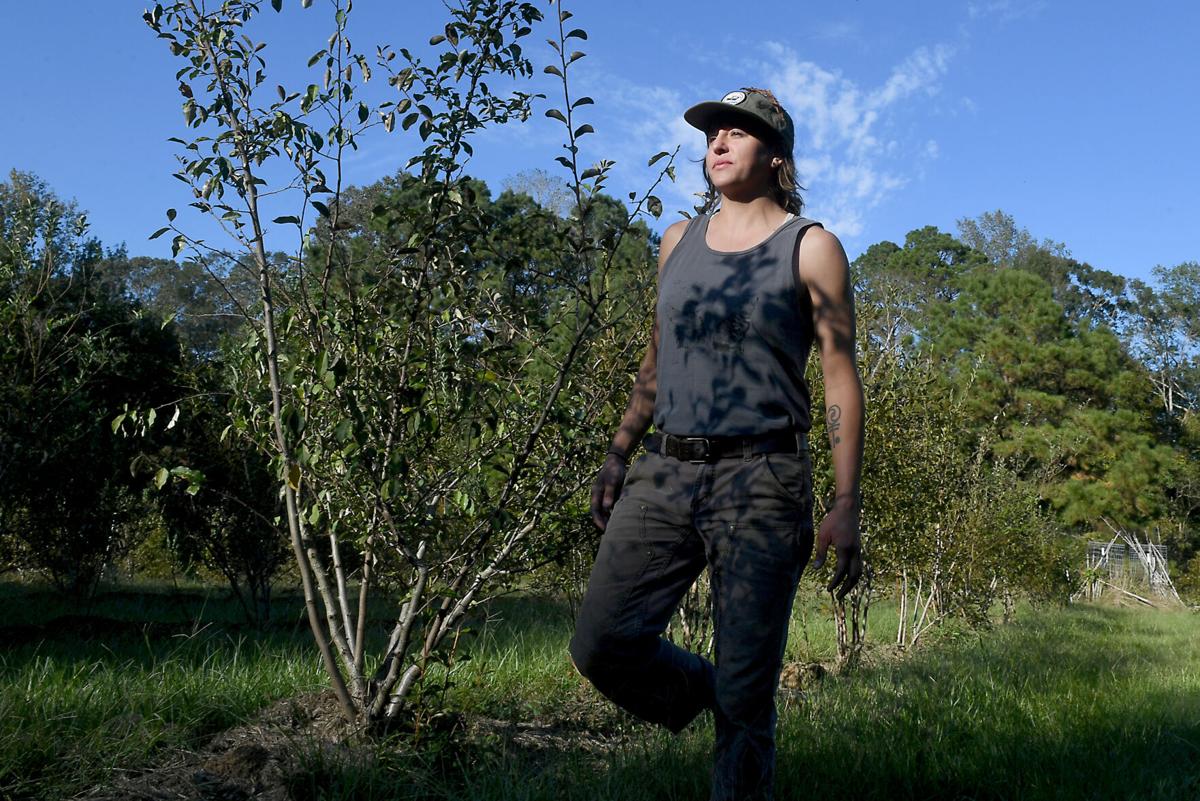 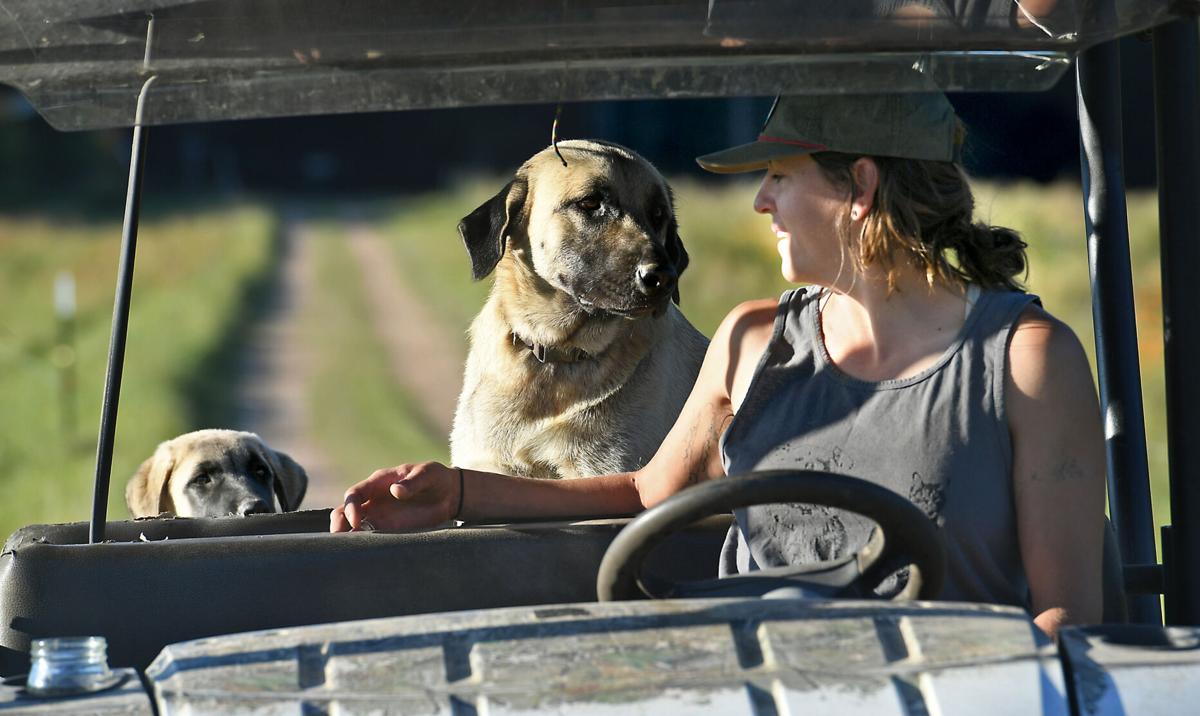 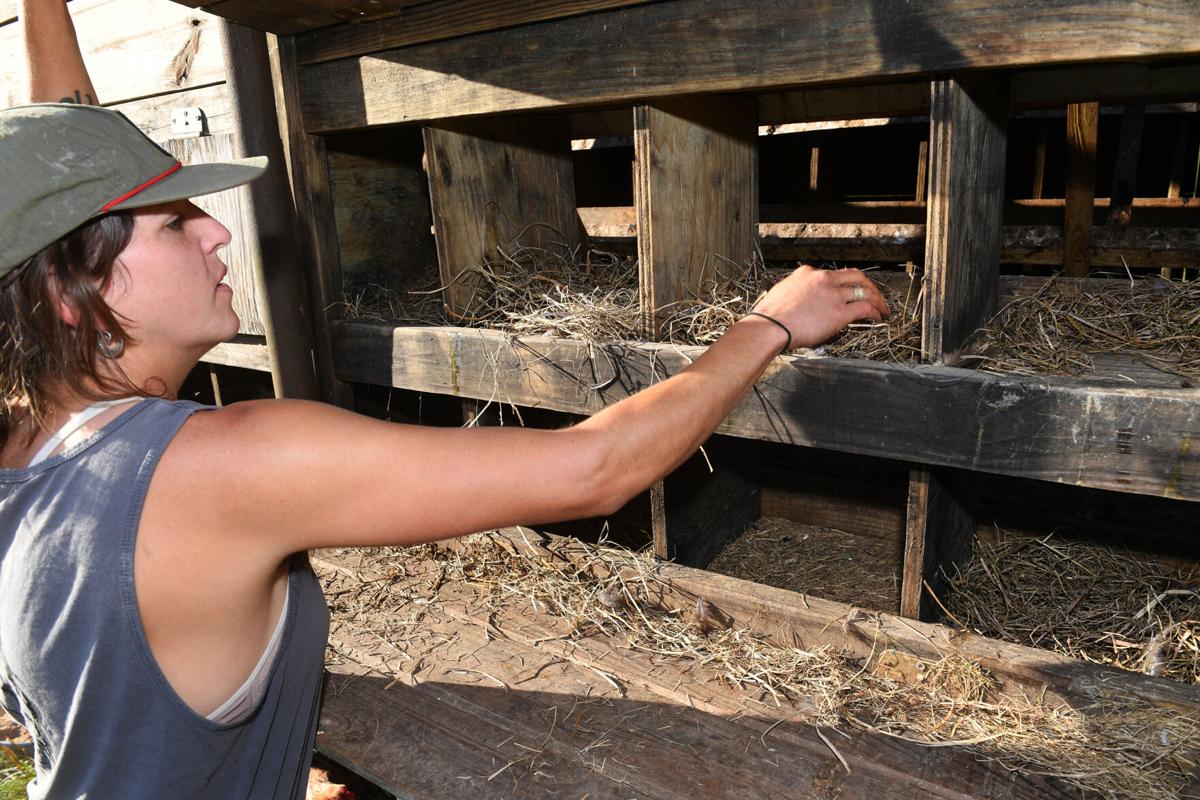 'They’re super sweet. I sit on them like couches. I ride them, more like just lounge on them,' says Sarah Roland of the water buffaloes at Bayou Sarah Farms.

It's where fruit trees and wildflowers support the bees that produce Roland’s honey. Where free range chickens dine on natural protein and fertilize the pasture as they go. Where nitrogen-storing goumi plants help feed adjacent blueberry bushes.

“I want to create a paradise here where things are more sustainable,” Roland said.

And that includes 11 water buffalo.

Roland’s milking parlor has been approved by the state, making it Louisiana’s first water buffalo dairy.

But these aren’t mere beasts of burden.

“I come out every night under the stars and hang out with them, play with them,” said Roland. “They’re super sweet. I sit on them like couches. I ride them, more like just lounge on them.”

Born in Baton Rouge, Roland was in elementary school when the family moved to this rural parish. Roland joined 4-H and got hooked on agriculture, riding horses, rodeoing and raising pigs, goats, rabbits and chickens.

“My mom said I could have all the animals I wanted as long as she didn’t have to take care of them,” Roland said.

But, after meeting people who had become successful small farmers, plans changed. Roland spent two years working on a cattle farm in Costa Rica, a chicken farm in Virginia and a goat and sheep dairy in California, then working for a contractor in North Carolina to acquire necessary mechanical skills.

Bayou Sarah Farms began in 2018 with blueberries. Then came the chicken-and-eggs operation and 15 beehives. Unable to compete in price with agricultural giants like Tyson and Sanderson Farms, Roland sold chickens at the Red Stick Farmers Market, to restaurants and those willing to pay the higher price for free-range poultry.

While working in California, though, Roland had become fascinated with water buffalo, loving their gentle nature and their superior milk for making cheese and gelato.

Roland arranged to buy three pregnant water buffalo. When the time came to pick up the livestock, two of the water buffalo had given birth, and Roland bought a bull and more livestock. It turned into an adventure that sounds like a parody of an old country song.

“I had eight buffalo and a dog and two pigs in a trailer headed across country for 28 hours,” Roland said. “It’s just as silly as it sounds.”

The milking has comical moments, too. Roland separates young from old at night so the calves won’t feed before morning. That’s when the fun begins.

But Roland is serious about this.

Having phased out raising chickens for meat, Roland hopes water buffalo will be the ticket to profitability, both by selling buffalo as the herd grows and by turning the milk into cheese and gelato. That will require building a creamery and, in the interim, renting a certified creamery to make these dairy delights.

Farming has never been easy, and that’s true at Bayou Sarah Farms, where Roland is the only employee and friends sometimes pitch in to help. Part of the plan is providing dinners that teach people about more natural ways of raising plants and animals, helping them experience what turned Roland on to agriculture in the first place.

“I remember sitting and eating breakfast over at my grandmother’s house, and I was eating yogurt with honey and blueberries, and I remember thinking I want to be eating this breakfast and I want to have made everything right here, and I’m doing that now,” Roland said. “I’m making my own yogurt, grow my own blueberries and have my own honey. That’s kind of the dream.”

Can you dig it? School gardens are teaching youngsters about more than just plants

As education gets more and more high-tech, several local schools have gone back to basics. And it doesn’t get more basic than dirt.