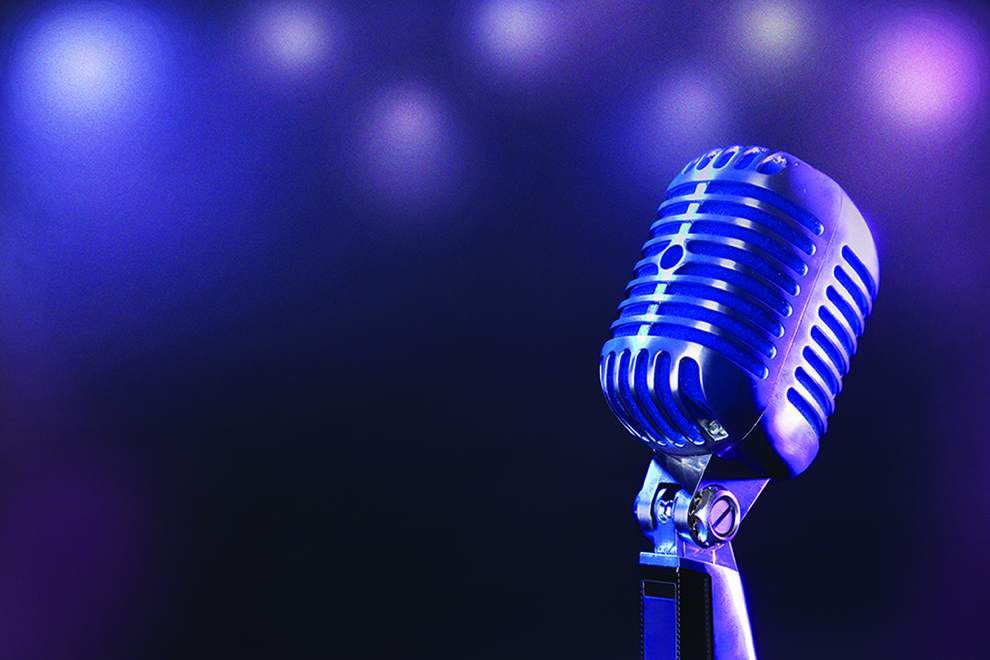 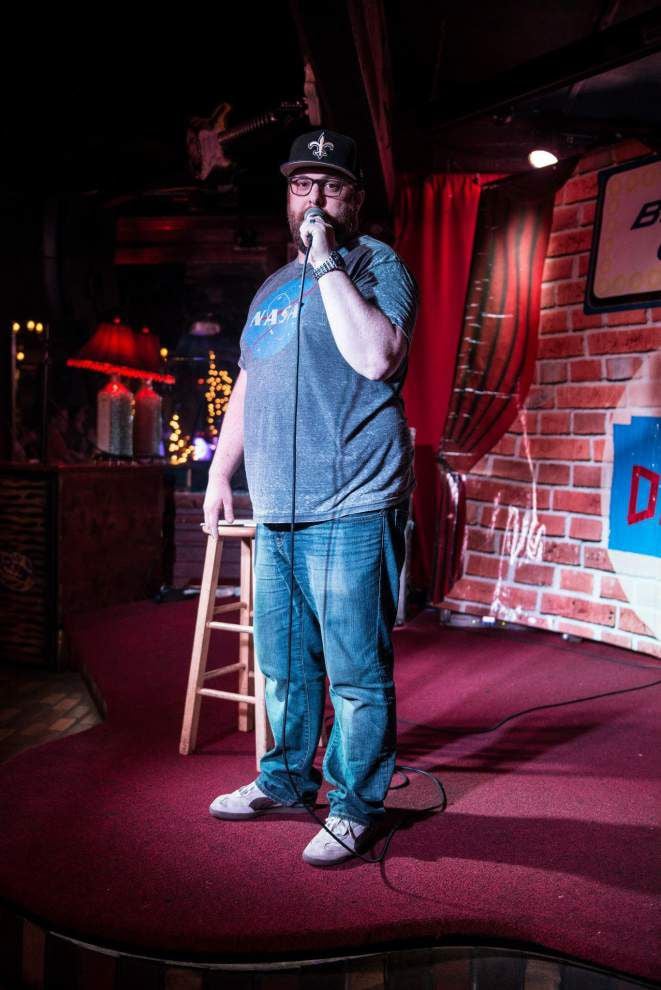 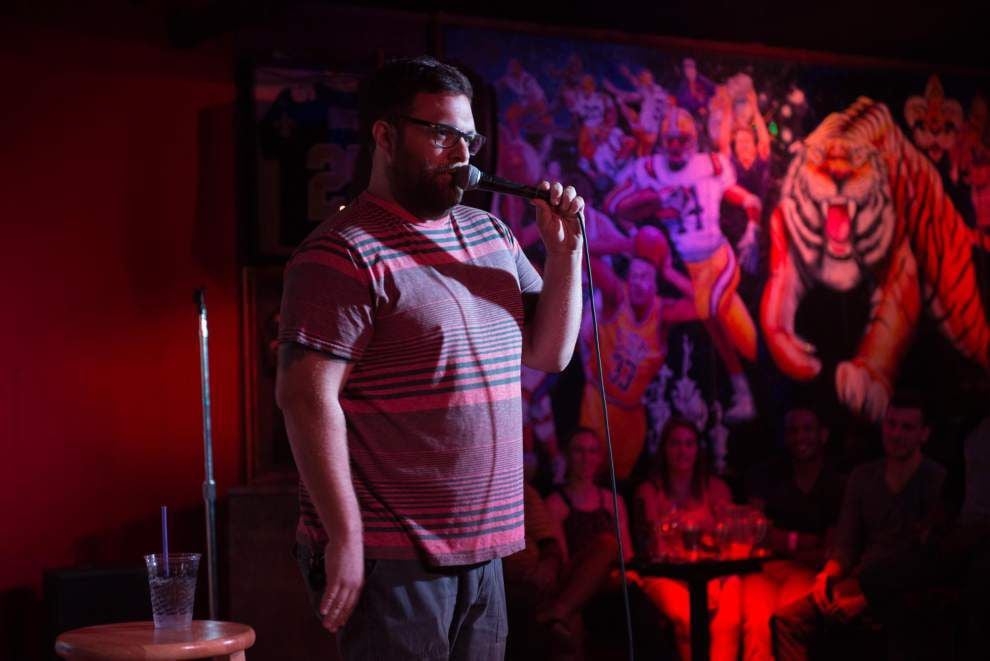 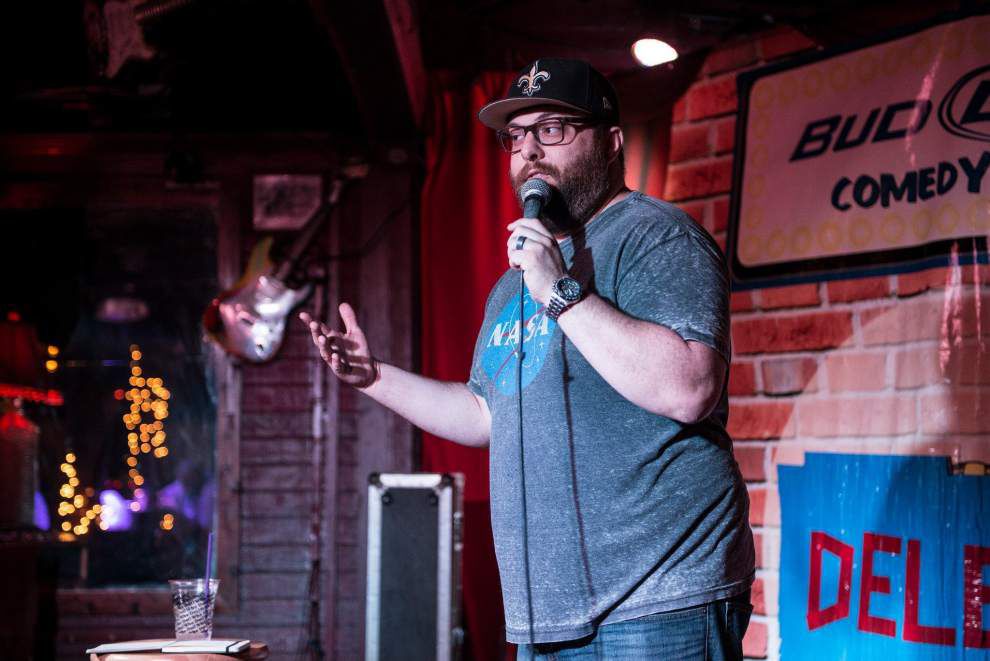 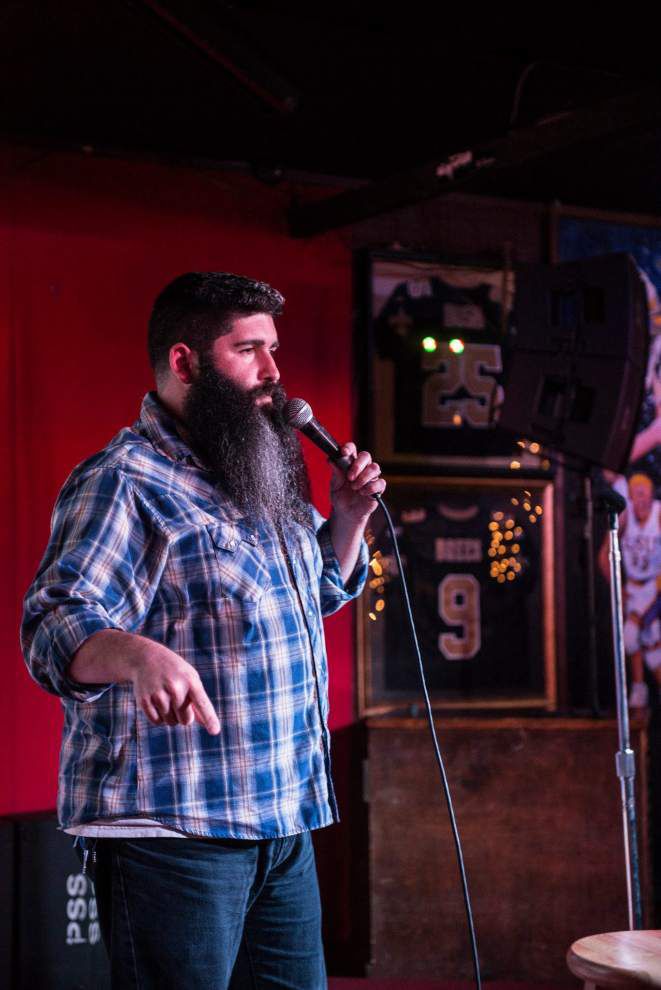 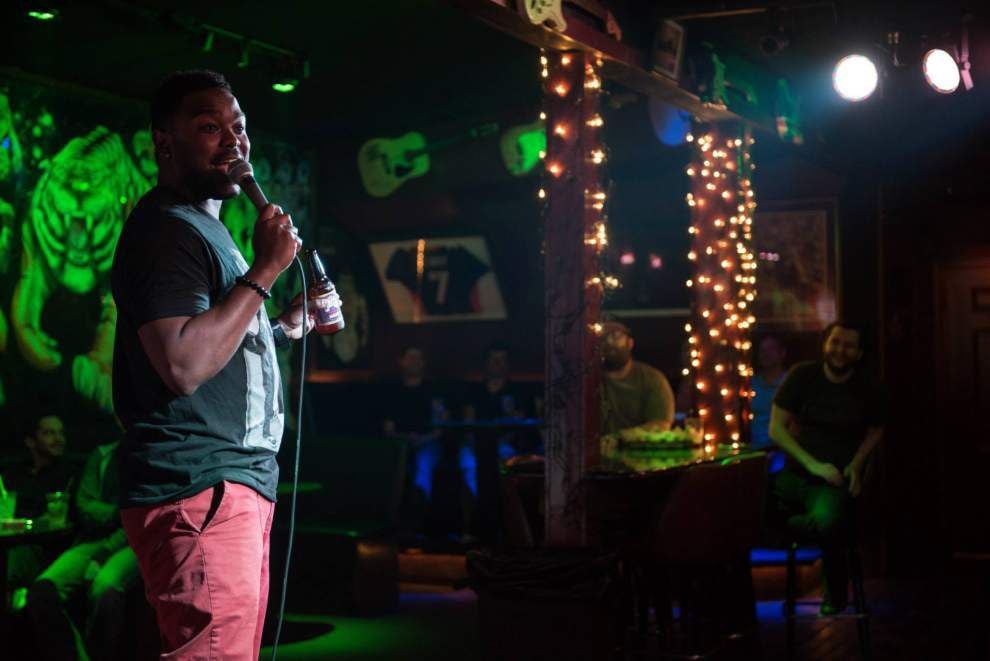 Photo by Erin Arledge-- Howard Hall performs at The Station. Hall has been a comedian for more than a decade and has opened for Katt Williams. 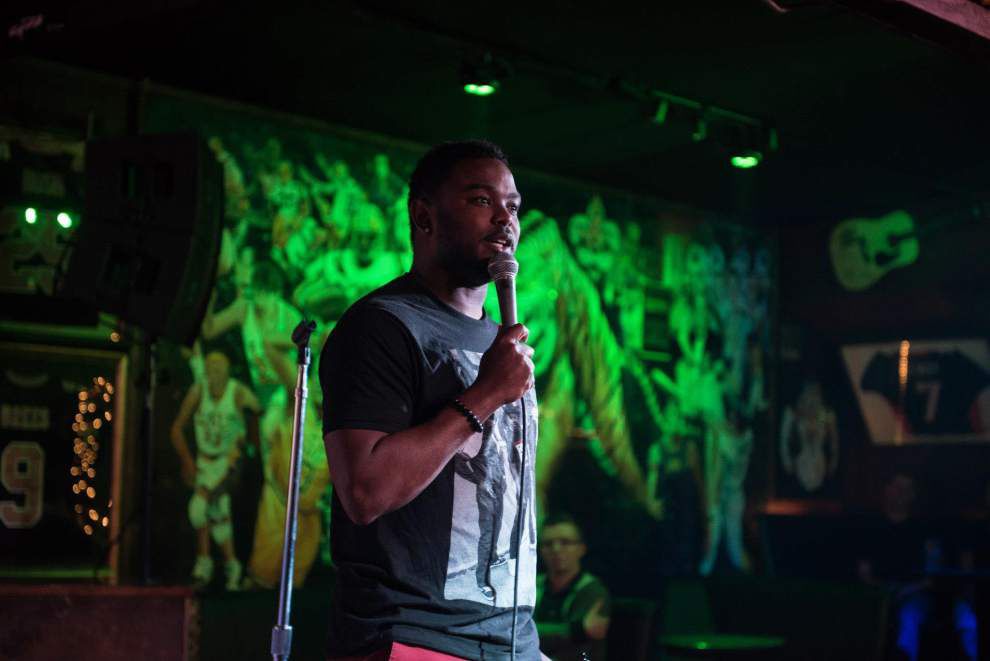 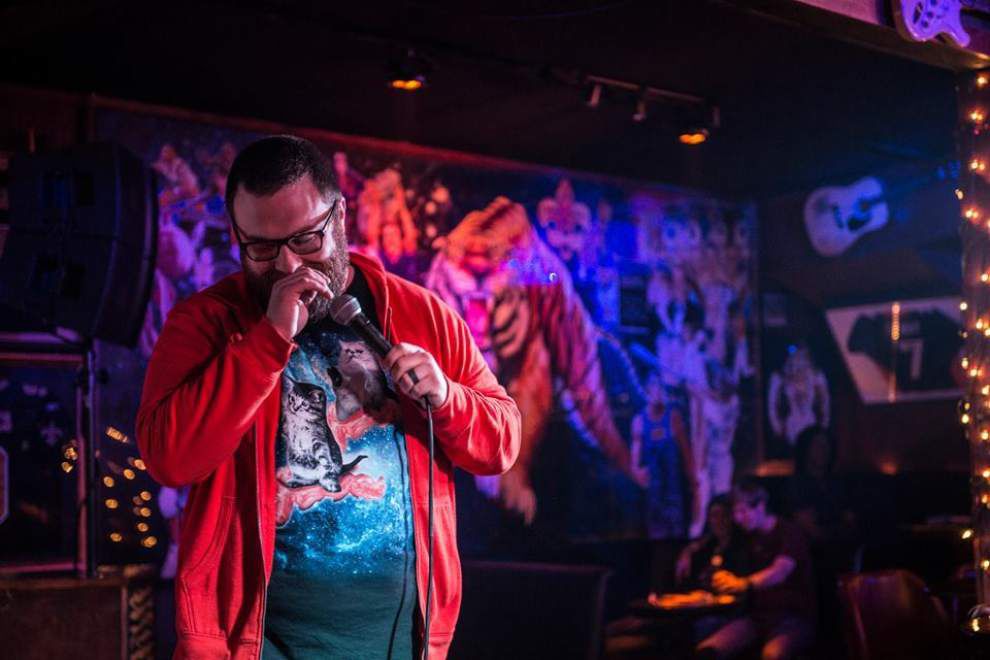 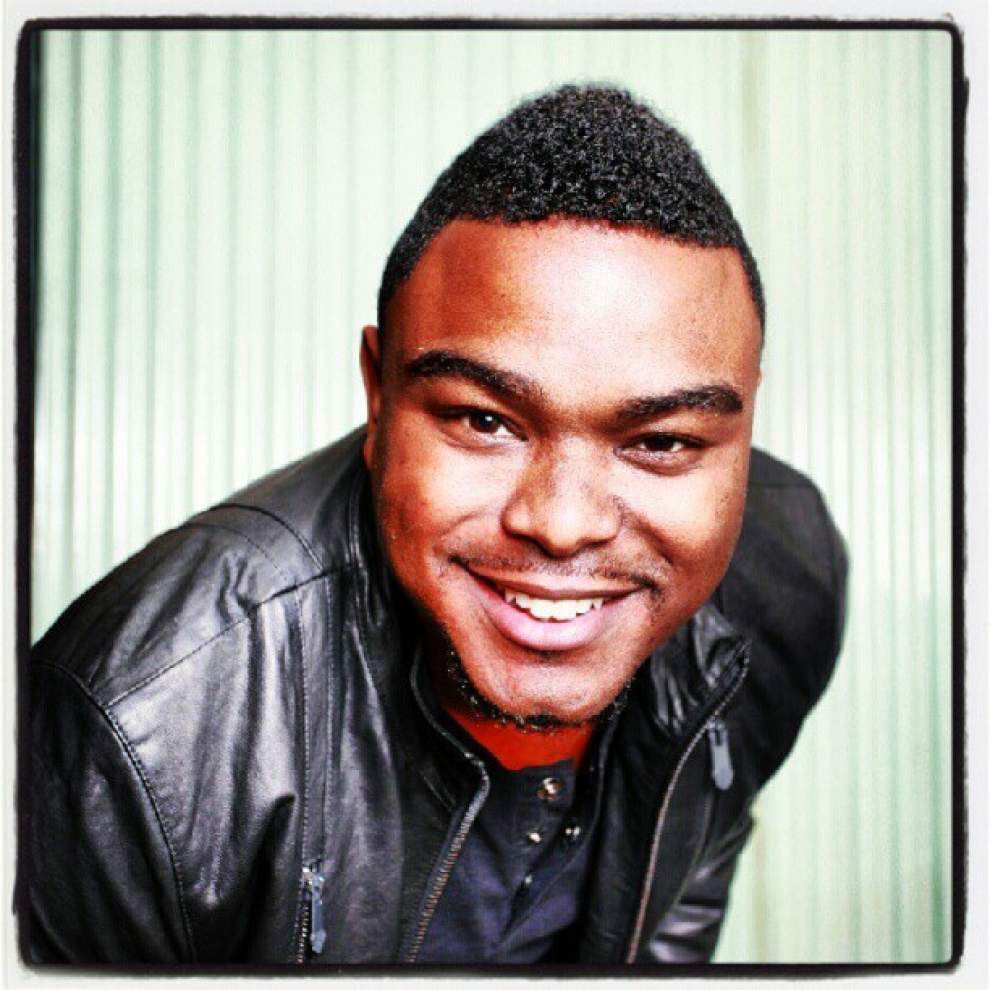 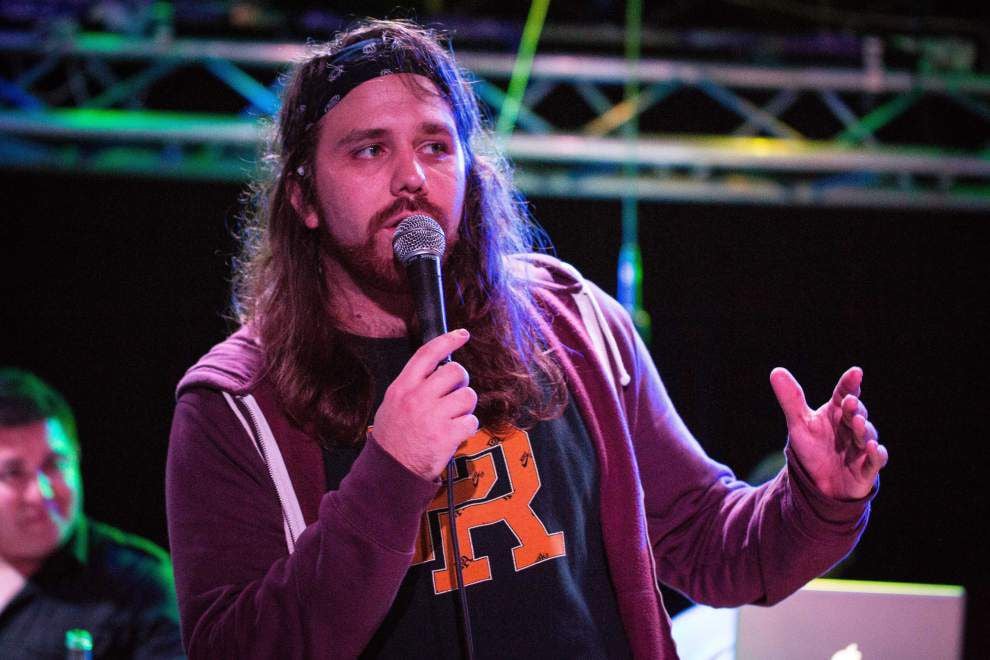 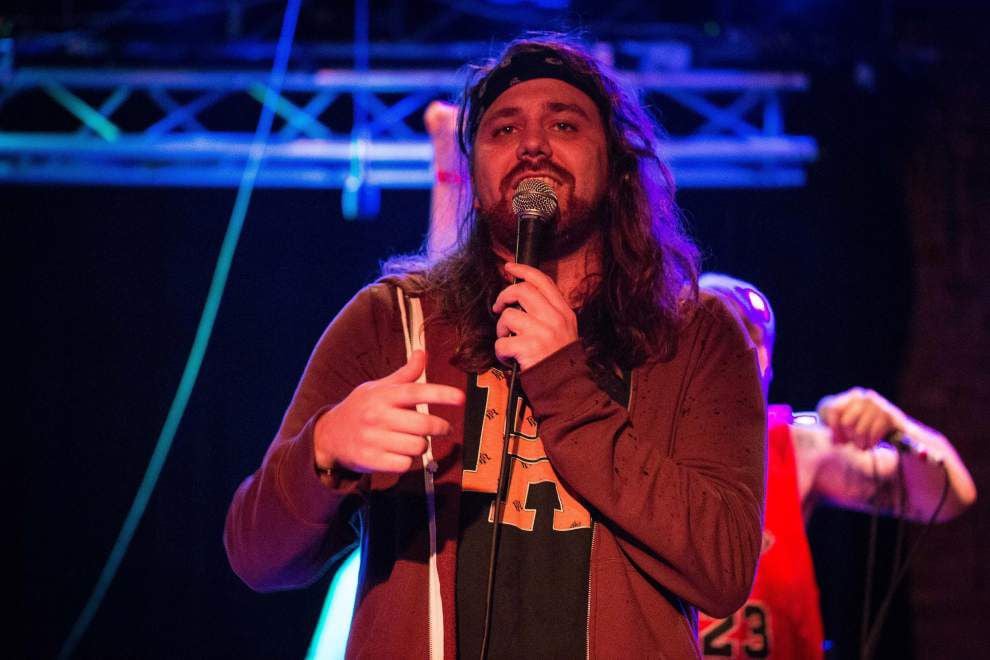 Photo by Mike Buck -- Comedian Jeff Buck performs during a Rap Battle at the Spanish Moon.

Photo by Erin Arledge-- Howard Hall performs at The Station. Hall has been a comedian for more than a decade and has opened for Katt Williams.

Photo by Mike Buck -- Comedian Jeff Buck performs during a Rap Battle at the Spanish Moon.

In Lafayette, Baton Rouge and New Orleans, regional comedians are working together, bringing laughs and notable national acts to small and big stages across South Louisiana.

The comedy scenes in Baton Rouge and Lafayette have yet to reach the status of New Orleans, which has multiple open mics on any given night to go along with high profile visiting headliners.

But, if you ask local performers, the buzz of the early 2000s is coming back to the Capital City and Cajun country.

We’re profiling four comedians — three from Baton Rouge and one from Lafayette — whose missions are to make people laugh.

If you hear comedian Howard Hall perform, he’s probably talking about his family. The 32-year-old started doing comedy in 2002. He said he didn’t find his voice until five years later, when he started talking about relationships and the daily life of his family.

“I have four kids, and, literally, two grand-kids,” he said. “I think I’m the only grandfather who still gets tattoos. Anything that happens to me, I’m pretty sure I can turn it into a joke.”

His work at local clubs caught the attention of Max 94.1. In 2013, he started working at the Baton Rouge radio station as an on-air personality. He credits his relentless grind to getting the job. To this day, he performs in and out of town.

In Baton Rouge, Hall saw how comedy boomed in 2003 then all but disappeared after Hurricane Katrina hit. Locally, he can only work out material at The Station’s Wednesday night open mic night.

“[Baton Rouge] can’t lose The Station,” he said. “The most frustrating part [about being a Baton Rouge comedian] is that you can’t go up as many times as you want without leaving the area.”

Now, outside of his new job, he’s touring up to four months a year. He’s opened for D.L. Hughley, Katt Williams and Pauly Shore, among others . But, he’s still holding out hope for Baton Rouge.

“We have a tremendous amount of talent,” Hall said. “It’s not the talent, it’s the lack of belief that comedy could work here. The way I see it is you can drive 40 minutes either way on I-10, and you’ll see it’s working.”

The first time Josh Watts did stand-up, he killed.

Just 21 years old, Watts performed at an Air Force talent show in North Carolina in front of a group of his fellow airmen.

“I had just gotten to the base,” he said. “I did pretty good, then I got overconfident.”

Away from the Air Force, he bombed the next times he got on stage.

“I couldn’t understand that I wasn’t hilarious,” he said. “I said to myself, ‘They laughed before.’”

In his short five-year career as a comedian, Watts has no doubt improved. In addition to being booked on regional shows, the Denham Springs native has performed in Alabama and Mississippi as well as started a podcast with his comedian/buddy Chase Meyers, called “Chase & Josh Talk.”

Unlike some comedians, Watts doesn’t write material. He just keeps working out his thoughts on stage until he finds the funny.

“I’ll say something on stage until I can say it in a funny way,” he said. “I need to say it to an audience and have some sort of reaction.”

Though he can’t work out that material as much as he may want because of the lack of shows and venues in town, he does see how supportive the community is. He also realizes that the city can’t afford to be cutthroat.

“The scene grows and fluctuates and shrinks and changes constantly,” he said. “But it’s a happy place to be. I don’t think of comedy as a competition. If the whole scene in Baton Rouge is good, we’re way more likely to get more people to see what we’re doing. In a small scene, you can’t fight amongst each other. Sometimes, you’re the only people at each other’s shows.”

While other teenagers were playing video games, Jeff Buck was producing a comedy show.

At 14 years old, Buck put on a show at the now-shuttered Dark Room. It was only a few times, but once he turned 18, he pursued comedy more, hosting a show at Boudreaux & Thibodeaux’s every Tuesday. Eventually, he would host another show after hours at the now-closed Louisiana Pizza Kitchen.

Like most comedians in the scene, he did what he could to provide a few laughs locally.

“Unfortunately, here, you have more stages built for music, and it’s more a college nightlife scene,” he said. “There are not that many quiet bars that you can try out comedy in Baton Rouge.”

Like many, the now-25-year-old moved to New Orleans. A recent graduate of the comedy conservatory The New Movement theatre, Buck works with the group Baton Rouge Comedy, producing, promoting and supporting comedy in the area, hosting shows at The Spanish Moon.

“A lot of what I’m doing is trying to put a fire underneath Baton Rouge comedians,” he said. “The main difference between the New Orleans and Baton Rouge comedy scenes is just the amount of content and production going on. It’s nothing that has to be competitive here. Baton Rouge can have more than two shows a week.”

Mingling with celebrities: Buck opened for rapper Kevin Gates at The Varsity. At the show, the comedian ended up meeting Riff Raff, who did a guest spot on a track of Buck’s comedy mixtape, “Free Jeff Buck.”

Out of nowhere, so it seems, Lafayette has started booking national touring comedians.

The man responsible for that? Jason Leonard.

Before he ever stepped on stage to do stand-up, Leonard was booking for a downtown Hub City bar. He wanted to see some comedy.

“I started bringing comedy down here a little less than two years ago,” he said. “It was selfish when I started it. It was just something I never experienced before. It felt like the perfect time to start it up.’

Since starting Lafayette Comedy, Leonard has been instrumental in bringing touring acts such as Tom Segura to town. In the next several days, Lafayette will see Randy Liedtke at Jefferson Street Pub on Saturday, and Nate Bargatze at JP’s Bar on Thursday, Sept. 24.

“I was surprised at the response,” Leonard said. “When it started, I just found out who was the management and developed relationships. When you’re booking, you have to have your gameplan and leave them no questions.”

Just last year, Leonard even got up the nerve to do his own act.

Being behind the scenes and on stage, he sees both sides of the comedy world.

“They each have their different types of stress,” he said. “As a performer, you have to be on point. When you’re booking, I might host and do five or 10 minutes here or there, but it’s more about making sure everything running smoothly.

I used to perform music, and we used to say that being on stage was the easiest part. Everything else — the social promotion, posters, getting the word out — is the hardest part.”

Dayman/Nightman: In Lafayette, he works as a data analyst for Judice Middle School. He has also performed with the popular, now-defunct local band The Mercy Brothers.

In addition to the comedians featured this week, each city along the I-10 corridor has up-and-coming comics you shouldn’t miss. Here’s a small list of guys and gals to check out.