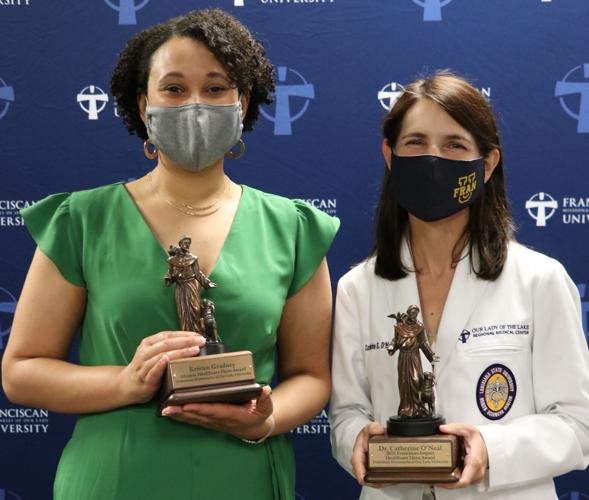 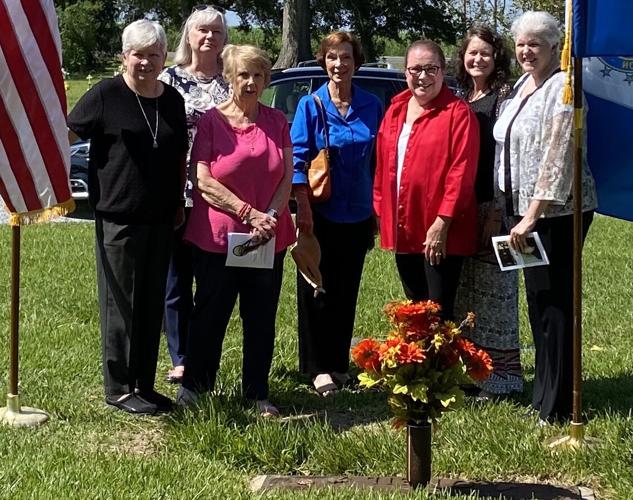 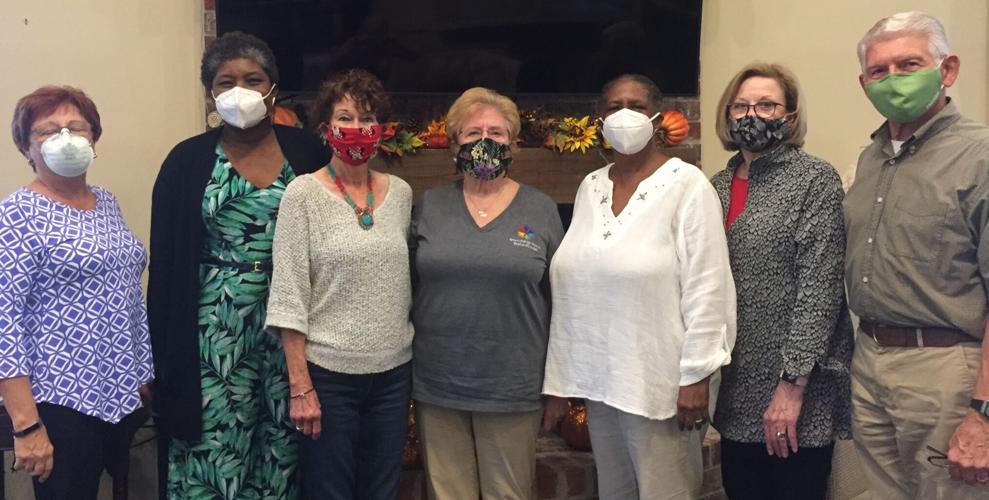 Friendship Force -- At the Sept. 21 meeting of the Friendship Force of Baton Rouge board are, from left, Lin Ashton, Alma Thornton, JiJi Jonas, Trudy Ivy, LaDeta Crawley, Karen Pharis and Larry Jonas. The board members discussed future plans and activities. 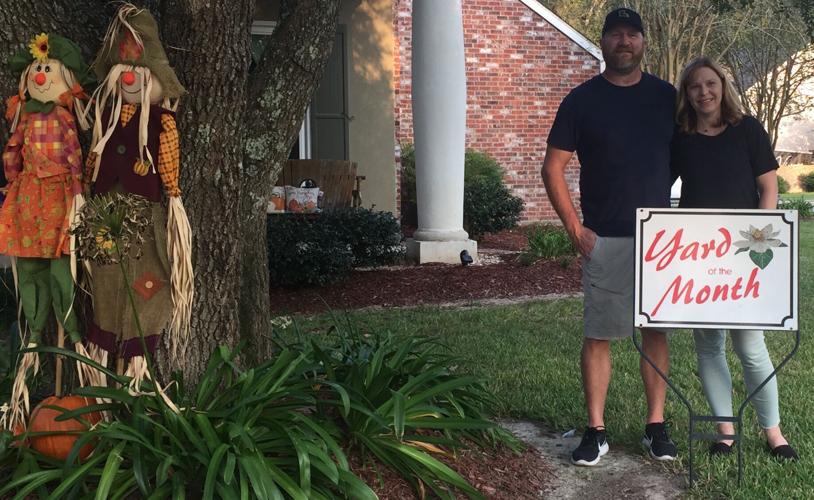 Yard of the Month -- The yard of Mike and Shari Gardner was chosen as the October Yard of the Month by the Comite Hills West Homeowners Association. The homeowners added fall decorations to their well-landscaped yard.

Friendship Force -- At the Sept. 21 meeting of the Friendship Force of Baton Rouge board are, from left, Lin Ashton, Alma Thornton, JiJi Jonas, Trudy Ivy, LaDeta Crawley, Karen Pharis and Larry Jonas. The board members discussed future plans and activities.

Yard of the Month -- The yard of Mike and Shari Gardner was chosen as the October Yard of the Month by the Comite Hills West Homeowners Association. The homeowners added fall decorations to their well-landscaped yard.

Franciscan Missionaries of Our Lady University hosted Fête des Fidèles Goes Virtual on Oct. 1 and raised $37,722 in support of student scholarships while also honoring Healthcare Heroes Kristen Gradney and Dr. Catharine O'Neal, who made an impact during the pandemic.

During the Fête des Fidèles, a French phrase meaning "Feast of the Faithful," FranU celebrated a tradition of education that has been making a difference in students' lives for nearly 100 years.

Currently, over 90% of students receive some type of financial aid. Proceeds from the event will support student scholarships to ensure that deserving students have the opportunity to prepare for the health care career that will fulfill their chosen vocation and meet the region's most critical needs in the future.

Gradney received the Alumni Healthcare Hero Award. She is senior director of operations at Our Lady of the Lake Children's Health and supports Health Centers in Schools and Goodwood Pediatric Clinics, and has led COVID testing efforts in the community and at OLOLPG. She mentors health care professionals and works to diversify the nutrition and dietetics profession by educating on cultural empathy in health care providers and community resources.

O'Neal received the Franciscan Impact Healthcare Hero Award. She is the chief medical officer at Our Lady of the Lake Regional Medical Center and an assistant professor of clinical medicine at LSU Health Sciences Center Baton Rouge. She is one of the Gulf coast's premier experts on infectious disease and has been a go-to source each year for business leaders and the local community during flu season and now amid the COVID-19 pandemic.

Gifts can be made in honor of the health care heroes, along with making a donation to student scholarships at franu.edu/fete. The event can be viewed at facebook.com/franubr/live.

The Friends of LPB honored distinguished supporters and champions of Louisiana Public Broadcasting at its annual meeting held virtually on Sept. 24 and hosted by LPB.

LPB President and CEO Beth Courtney welcomed guests, recognized and thanked members of the Louisiana Legends and Visionary Societies, and the Boards of Directors of Friends of LPB, Louisiana Educational Television Authority and Foundation for Excellence in Louisiana Public Broadcasting.

Courtney presented the 2020 honorees of LPB President’s Awards to long-time LPG supporters and advocates: Richard Lipsey, owner of Lipsey’s, one of the nation’s largest sporting goods distributors; W. Clinton “Bubba” Rasberry Jr., managing partner for Crestview Woods and Rasberry Commercial Properties; and Richard Zuschlag, CEO of Acadian Companies and a 2012 Louisiana Legend. The three award recipients were major underwriters of the award-winning 2019 LPB documentary, "In the Blind," about the duck hunting culture in Louisiana.

Outgoing board members Anne Kennedy, Robert Levy and Rae Vasquez were recognized for their service to LPB over the past six years by Friends of LPB Executive Director Terri Crockett, who also presented the Chairman’s Award to outgoing Board Chair Bob Emmert. During Emmert’s tenure, revenue streams were diversified and membership revenue increased by 9.5%.

LPB Deputy Director Christina Melton previewed upcoming programs coming to LPB and PBS this fall. Also highlighted were new and continuing LPB projects, including a children’s health initiative with important tips for parents and caregivers; "Deep in the Delta," uncovering stories in the rural communities of the Louisiana Delta; and "The Helpers," positive stories of Louisianans helping one another.

Jena Maughan, director of Metanoia Manor, a refuge for adolescent girls rescued from human trafficking, spoke to the John James Audubon Chapter Daughters of the American Revolution on Sept. 21.

Maughan shared the history of Metanoia, the education and hobbies of the residents. Metanoia Manor was founded in 2018 by the Rev. Jeffery Bayhi and is a faith-based residential facility. The chapter will fill backpacks with personal items, art supplies and craft kits and make a reading pillow with a journal for each of the residents.

Chapter members gathered in the Grace Memorial Cemetery in Plaquemine on Sept. 27 to dedicate the DAR grave marker for O’Neil. Family and friends paid their respects and shared stories and tributes.

DAR membership is open to women 18 and older who can prove lineal, bloodline decent from an ancestor who aided in achieving American independence. For information, contact mdtyler@cox.net.

New members were introduced and the roles and responsibilities of lieutenants were confirmed. The 2021 Mardi Gras events’ dates were announced, starting with the Royalty Coronation in October to the parade in February. Mystique lieutenants provide assistance at all krewe functions, adding additional color, mystery and pomp and circumstance to the Mardi Gras tradition.

Eric Vanbergen, of Lafayette, was presented the 2019 Youth Conservationist of the Year award for his leadership in promoting native plant and coastal prairie restoration at his school, Ascension High School in Youngsville. In 2017 he led a volunteer effort to plant a three-acre prairie. Vanbergen worked with mentors, teachers and other students in 2019 to establish another smaller, relatable prairie planting within the school building complex that has become an example of what can be achieved using native prairie plants in a designated garden. Vanbergen formed the Ascension High School Prairie Club that is still active today. He is a freshman at LSU studying landscape architecture.

Emma Reid was presented the 2019 Conservation Communicator of the Year award for writing and producing the documentary “In the Blind.” The film, which debuted in 2019 on Louisiana Public Broadcasting, explores how duck hunters in Louisiana have undertaken conservation efforts to preserve and restore the state’s coastal and marsh habitats that support critical wintering ground for migratory waterfowl in the Mississippi Flyway. Reid captures the rich traditions of hunting and the important role hunters play in conservation of wildlife and their habitats, as both the popularity of hunting and the condition of Louisiana’s coastal ecosystem declines.