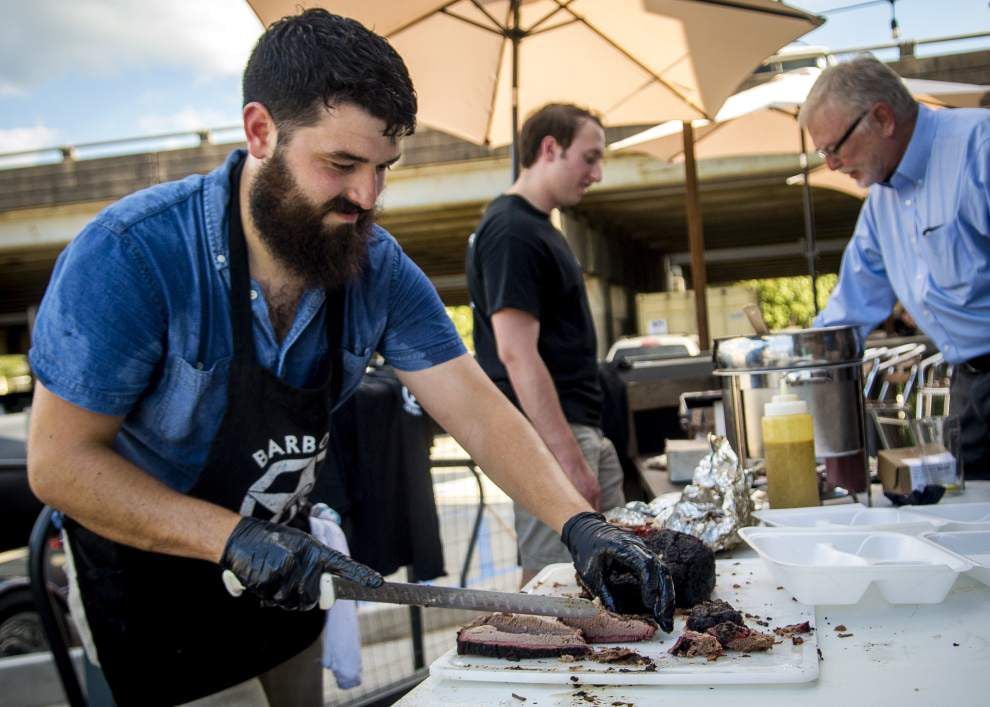 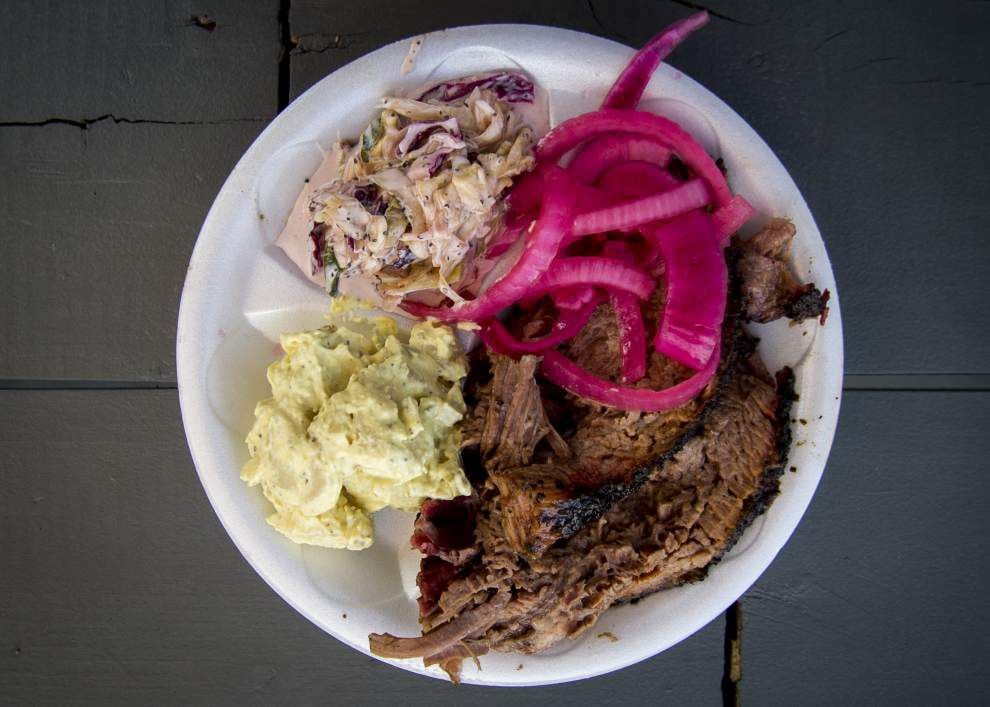 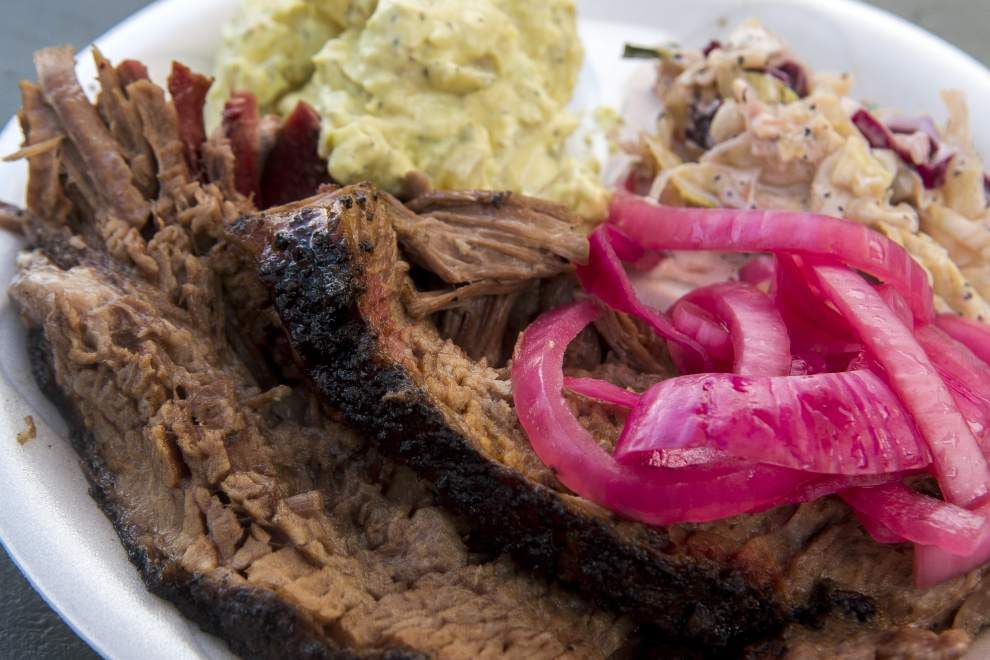 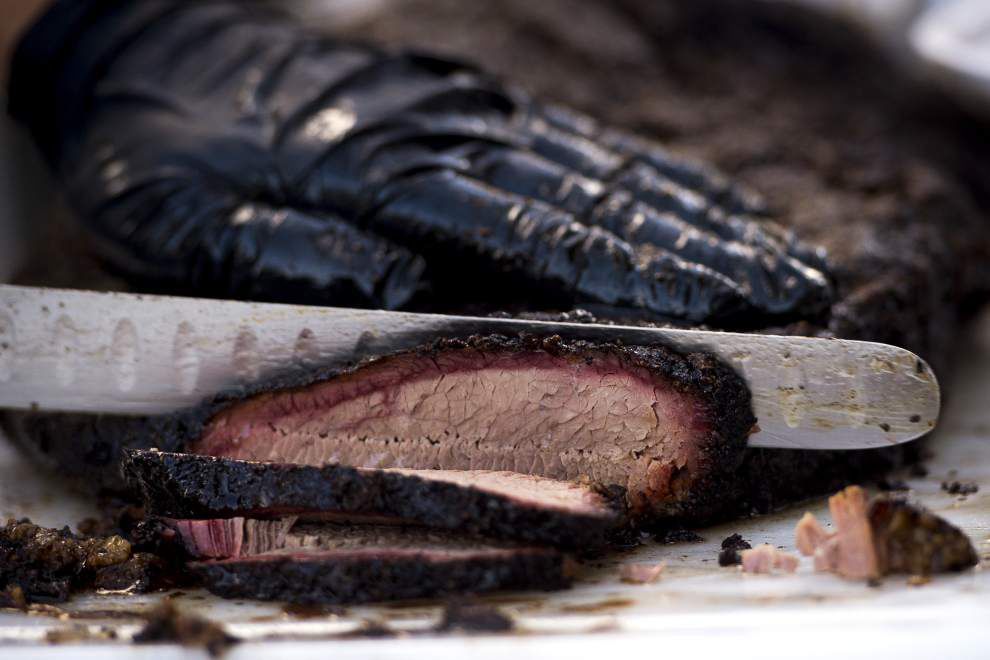 Advocate staff photo by BRIANNA PACIORKA -- Brisket smoked by Barbosa's Barbecue is sliced during a pop-up dinner held at The Overpass Merchant on Tuesday, June 7.

Advocate staff photo by BRIANNA PACIORKA -- Brisket smoked by Barbosa's Barbecue is sliced during a pop-up dinner held at The Overpass Merchant on Tuesday, June 7.

When Barbosa, the Texas native and barbecue entrepreneur behind Barbosa’s Barbeque, sold the last of his pulled pork at a pop-up dinner at The Overpass Merchant about 7:30 Tuesday night, he was sweaty and exhausted.

It had been a long day that had started the night before. The first of the briskets, which had sold out much earlier in the evening, had landed on his 250-gallon smoker in his front yard just after midnight and spent 15 hours cooking. Barbosa, a physical therapy technician who turned his backyard hobby into a part-time business earlier this year, had spent the night guzzling coffee, trimming fat and splitting oak logs with an 8-pound maul to stoke the constant fire.

“There aren’t other places here with someone tending fire for 15 hours,” said Barbosa, 25, as he shook salt and pepper onto a brisket in his kitchen about 2 a.m. Tuesday. “I think people appreciate the work that went into it.”

Growing up in Victoria, Texas, Barbosa said he was surrounded by good barbecue — the town takes its meat seriously and is less than 100 miles (next door, in Texas terms) from the barbecue Meccas of Lockhart and Luling.

He’d help the dads from his school trim hundreds of pounds of brisket for picnics and fundraisers.

But it wasn’t until earlier this year that Barbosa, who moved to Baton Rouge in 2013, started looking at his hobby as a potential business. He started out cooking ribs on a small backyard smoker for parties before buying his current rig, a double-doored converted 250-gallon tank welded onto a trailer, in March.

Since then, he’s served up hundreds of pounds of pork and beef — along with coleslaw, beans and potato salad — at free food Sundays at Mid City’s Radio Bar and at the Baton Rouge Blues Festival, where he barely slept for the whole weekend while selling out both days.

“It was my first big public showing,” said Barbosa. “That Sunday, I had 10 or 15 people who came back and said, ‘We’re not here for the music, we came to get more of the barbecue we had yesterday.’ That was the moment.”

Though it often feels like he’s flying by the seat of his pants — there have been occasional near-disasters, like a grease fire that brought the Fire Department rushing to his smoker just before Blues Fest — he’s also turning plenty of heads.

For such a food-crazy city, there’s just about no one else doing what Barbosa’s doing. About 2 a.m. Tuesday, as he tastes pickled red onions and blasts Townes Van Zandt over the stereo, Barbosa’s excited about a recent blurb in local media — and a shout-out on Facebook about The Overpass Merchant pop-up event from Jay Ducote, the Baton Rouge chef and “Food Network Star” finalist.

After loading his smoker to capacity and still selling out to long lines Tuesday night, he’s already talking about trading in his smoker for a pit at least twice the size. With a bigger pit, Barbosa said, he might also have enough room to smoke chicken and beef short ribs (I’ve tasted both, and they’re great).

He’d also like to find a spot in Baton Rouge to cook on Saturdays, set up picnic tables, bring in a band and serve lunch.

For now, he’ll continue to bring the brisket and pork to pop-ups — more are already planned at The Merhcant. He’s also hoping to land more catering and tailgate gigs in the fall.

“That’d be a good way for me to get this started,” Barbosa said.