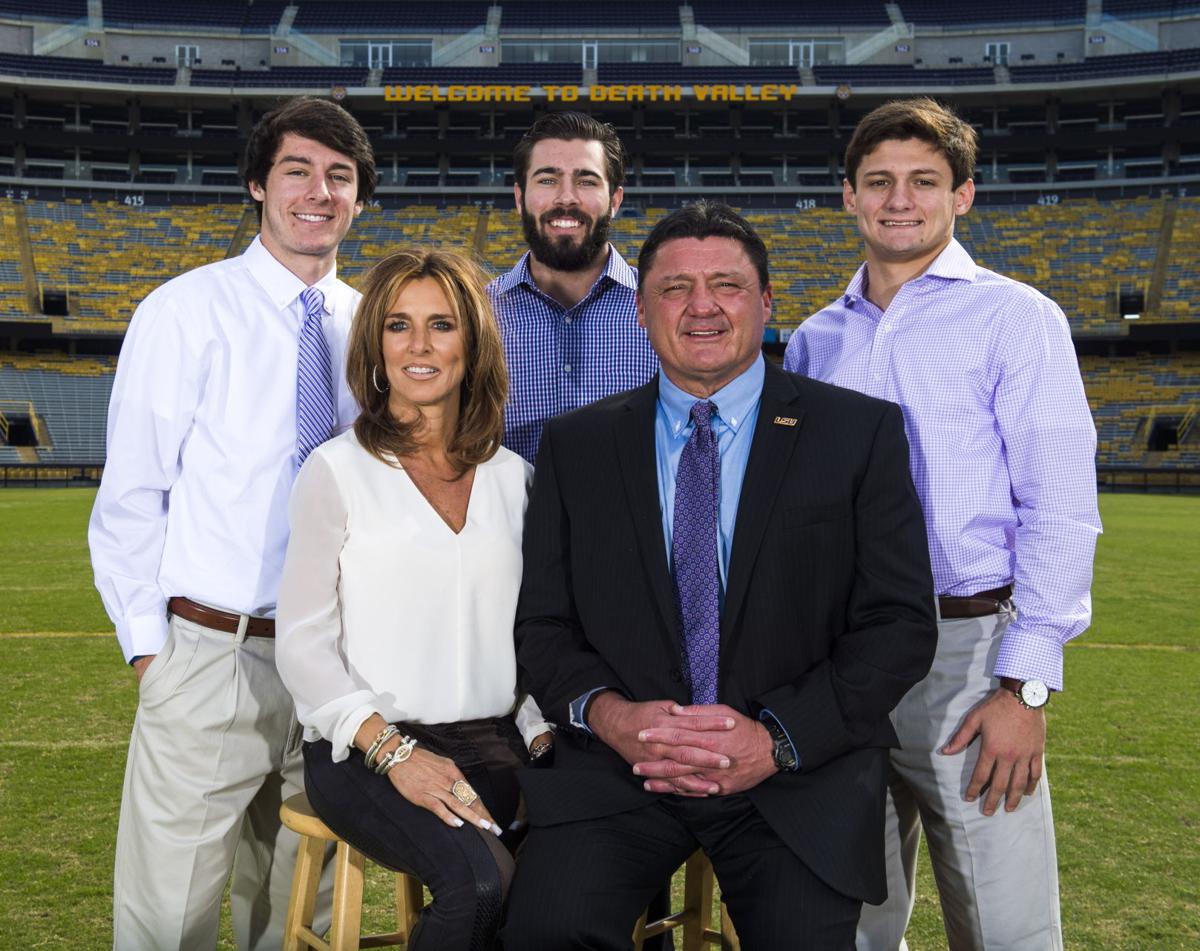 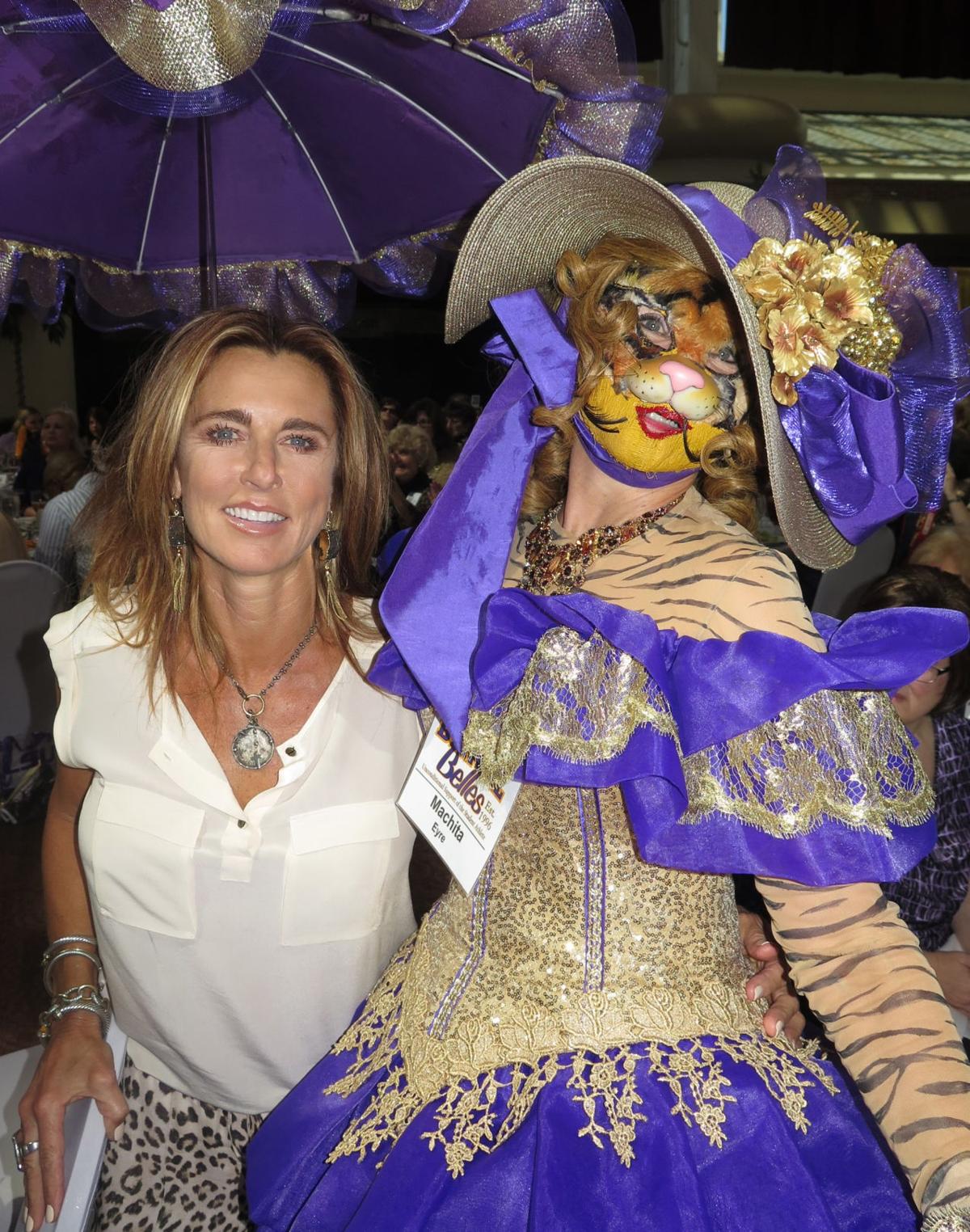 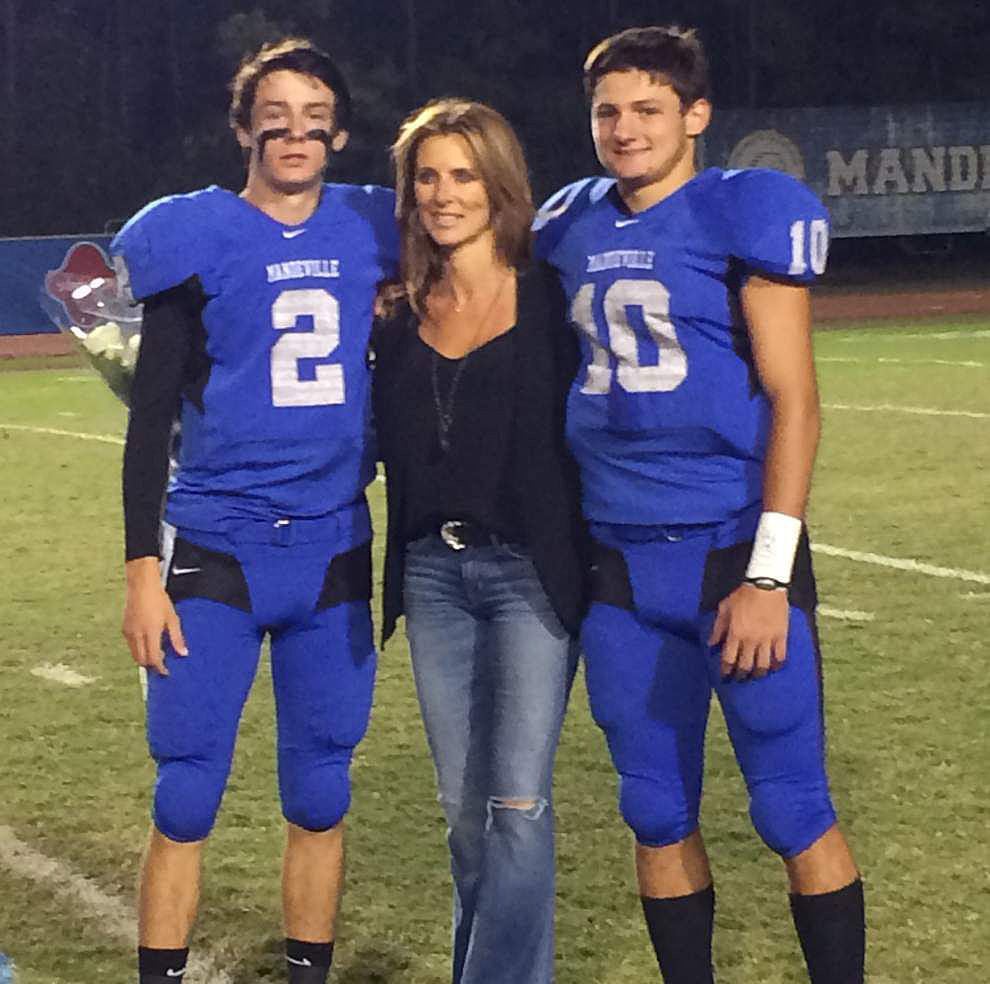 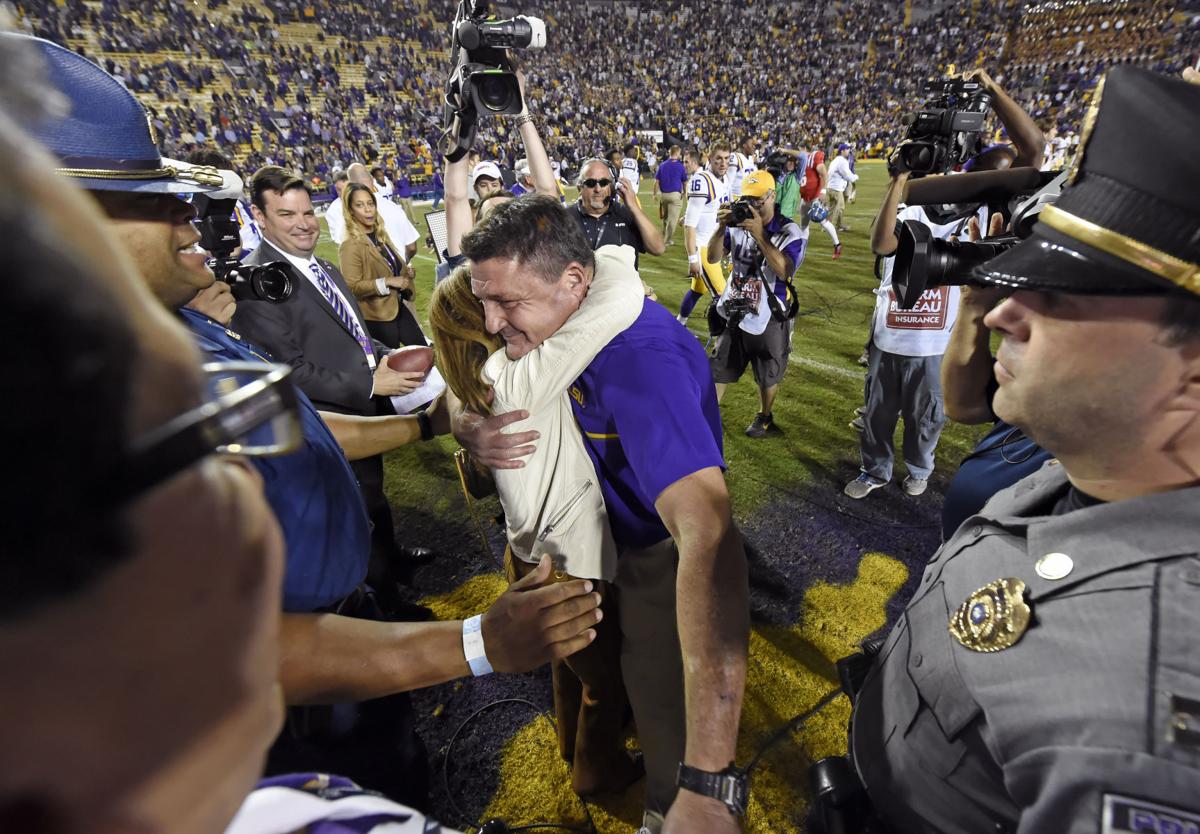 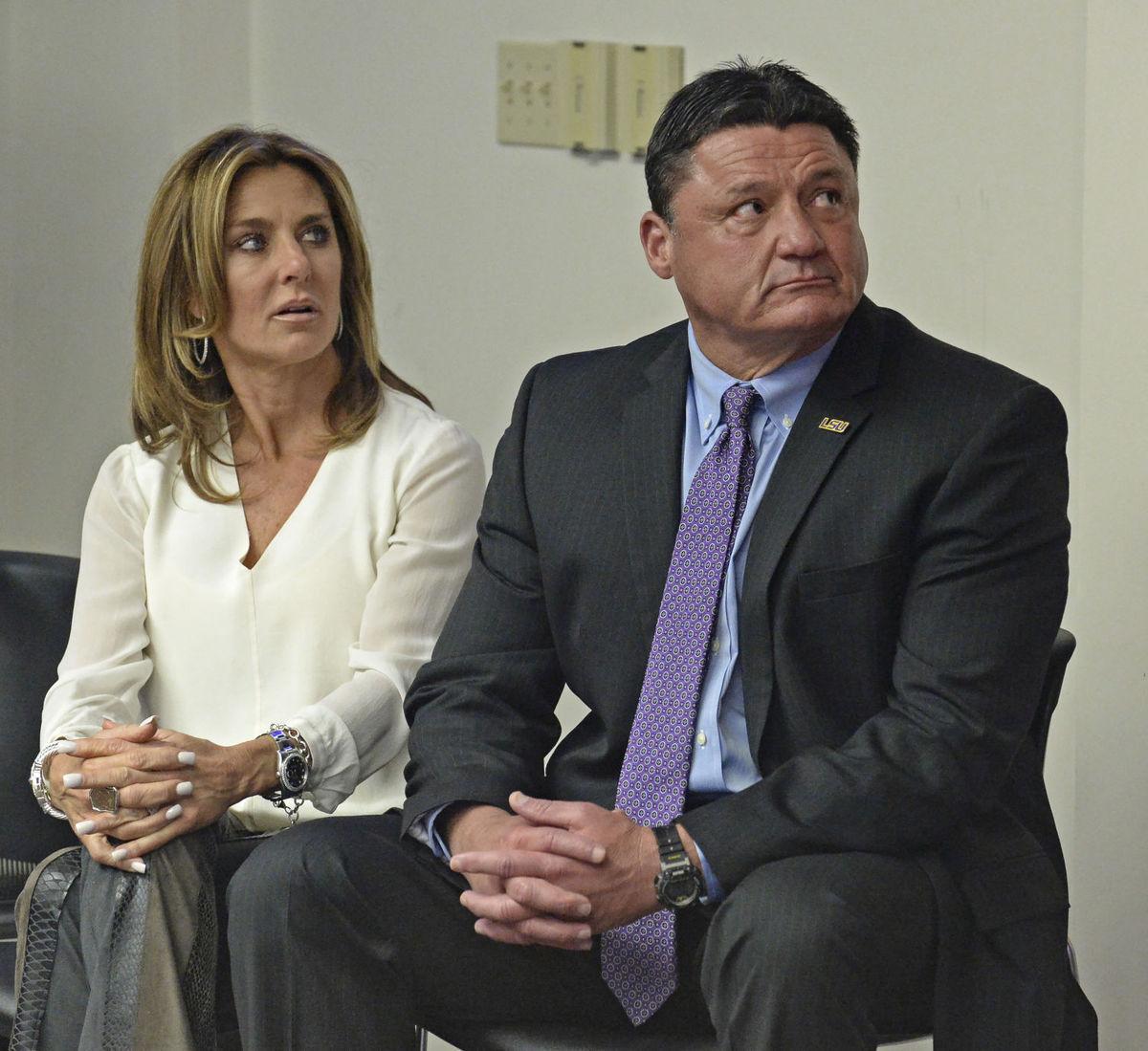 Kelly Orgeron sits beside her husband as he's named head football coach of the LSU Tigers.

Kelly Orgeron sits beside her husband as he's named head football coach of the LSU Tigers.

Ed and Kelly Orgeron and their three sons are a football family.

Ed Orgeron is, of course, LSU's new head football coach, and son Tyler is a student assistant for the LSU football team. Twins Cody, a quarterback, and Parker, a wide receiver, play for McNeese State University in Lake Charles.

But for Kelly Orgeron, 52, it's the family part that comes first.

"Family time is so valuable in the coaching world. Ed tries to give the staff as much time to be with their families as he can because you have such limited time together," she says. "You learn to protect that family time, but I can't imagine any other life."

Man of the house: LSU's Ray Thornton gets his chance -- in his hometown of N.O., with dad watching from Kuwait

The Orgerons have been married for 20 years. She met the Larose native on a blind date.

Kelly Orgeron, who grew up in a small Arkansas town, was working as a nurse practitioner specializing in kidney patients.

"I'd hired this dietitian to work with my patients, and she and her husband knew Ed. She told me, 'I've got this friend you've got to meet.' Tyler was 3 at the time. I told her I wasn't interested," recalls Kelly Orgeron. "Ed was with Syracuse at the time, and they lost a game so they were going to the Liberty Bowl in Memphis instead of the Orange Bowl in Miami. I went with my friends to Memphis, and they introduced me to Ed.

"Two months later, we eloped and got married," she continues, laughing. "That was not my normal, nor his. My family thought I was crazy. His, too."

Kelly Orgeron packed up Tyler, who has since taken Orgeron as his last name, and moved to Syracuse, New York. They'd been there a year when the coach got a job offer from the University of Southern California. Kelly Orgeron was pregnant with the twins so she and Tyler stayed in Syracuse.

"Ed would fly home every chance he got," says Kelly Orgeron. "After the twins were born, we loaded up everything we had and headed to LA. We looked like the Beverly Hillbillies — seriously. Los Angeles was the big start to our journey as a family."

Now, with 20 years as a coach's wife and countless games for her sons under her belt, Kelly Orgeron knows what to do as the new season starts.

"I just take it one day at a time," she says. "When Ed went from interim coach to head coach, that changed everything."

Before, Kelly Orgeron says she was able to attend all of the twins' games. When that became impossible, Ed Orgeron's mother, Coco, took over cheering for Cody and Parker.

"This year," says Kelly Orgeron, "we will just see how it works out."

While the couple still has their home in Mandeville, they also have a condo in Baton Rouge, which allows them to spend more time together. And, as game day approaches, the mood at the Orgeron house begins to shift.

"We all put our game faces on. There's no joking around. It takes so much mental energy, both before and after the game," says Kelly Orgeron. "Regardless of whether we win or lose, they have to have downtime post-game to reflect on how they played, what they would have changed. I have to give them quiet time. They know I'm there if they need to talk, but I try and give them space."

And how do the Orgerons celebrate the wins? By getting together for dinner.

"It's a glorious day!" says Kelly Orgeron. "When all five of us get together, it's a huge, huge bonus. Those are some of the happiest times we have."

ALEXANDRIA — Midway through his run, Shirdetra Chark lost the ability to speak.

Because football dominates everyone's life in the fall, Thanksgiving and Christmas can be a little tricky. Many of the team members join Coach O and his family for turkey and all the trimmings at Thanksgiving.

"It's like one big extended family — one team, one heartbeat," says Kelly Orgeron, quoting a phrase her husband often uses. "Christmas is very special for us and we always try and find a few days to hunker down and attend church together.

"God's blessed me," she continues. "The men in my life show me respect and love that only your boys and your husband can do, and I know one day God is going to give me beautiful granddaughters. Not right now but one day."

As dean of students and head football coach at Westminster Academy in Florida, Tommy Lewis’ …

I hit the coaching trifecta last week. I had lunch with Coach O and LSU's new basketball coach Will Wade, and later the same night, I had dinn…

Last May, shortly before the start of his first full season as LSU's head football coach, Ed Orgeron privately dealt with a family crisis: the…