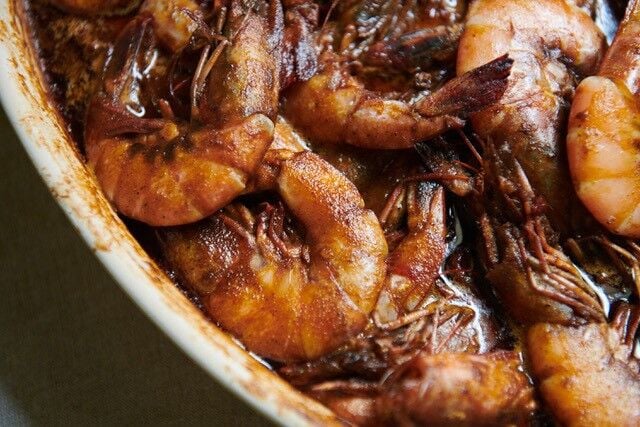 According to Chef Jarred Zeringue, Pascale's Manale Restaurant, opened in 1913, is credited with the invention of New Orleans-style barbecue shrimp. Zeringue has devised his own recipe to pay homage to the legendary dish. 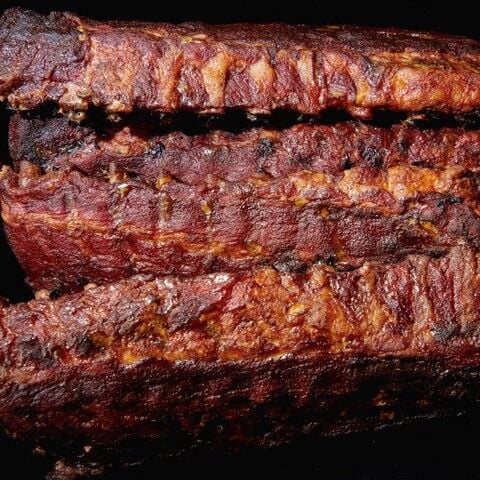 Chef Jarred Zeringue is proprietor of Wayne Jacob's Smokehouse and Restaurant, a 72-year-old business in LaPlace and a can't-miss stop on the Andouille Trail. 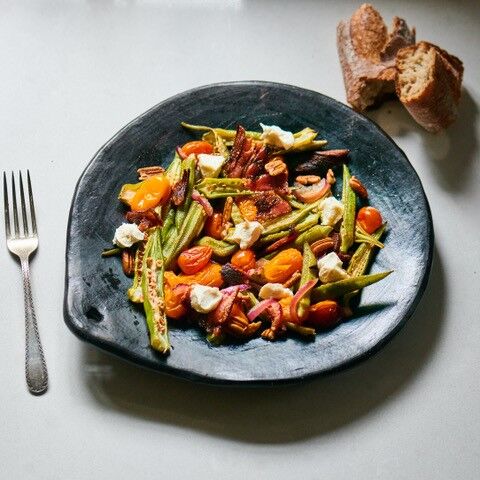 Most people in Louisiana eat their okra smothered, fried or in a gumbo. Chef Jarred Zeringue suggests roasting it in a salad. 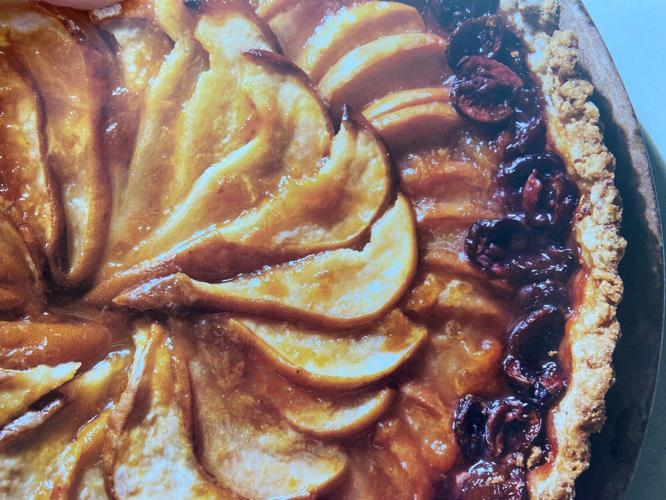 Chef Jarred Zeringue says cooking unripe fruit will release and develop flavors that just aren't available when eating them fresh. He recommends this Stone Fruit Tart with Pecan Shortbread Crust as a great way to get the most from stone fruit flavors. 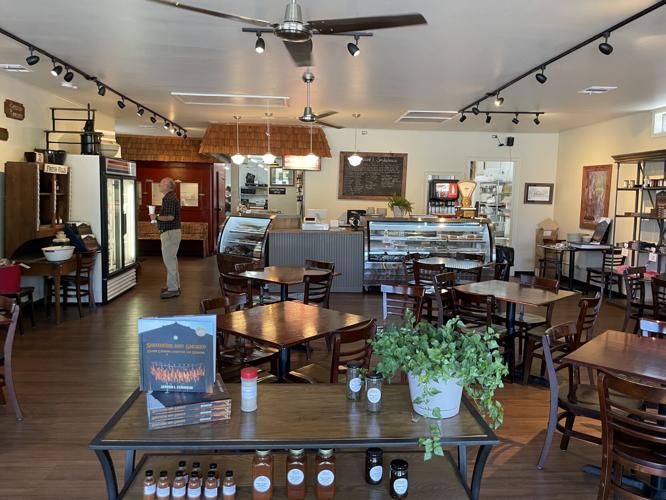 The interior of Chef Jarrod I. Zeringue's restaurant, Wayne Jacob's Smokehouse and Restaurant, is located at 769 W. Fifth St. in LaPlace. 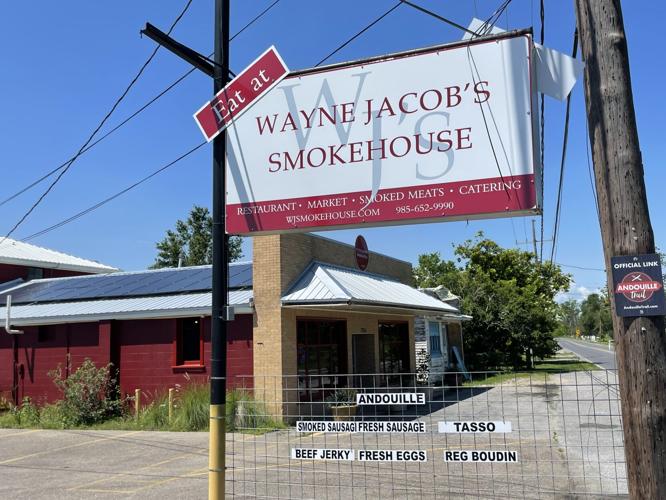 Wayne Jacob's Smokehouse and Restaurant is located at 769 W. Fifth St. in LaPlace. The restaurant has recently reopened after the building was devastated by Hurricane Ida.

According to Chef Jarred Zeringue, Pascale's Manale Restaurant, opened in 1913, is credited with the invention of New Orleans-style barbecue shrimp. Zeringue has devised his own recipe to pay homage to the legendary dish.

The interior of Chef Jarrod I. Zeringue's restaurant, Wayne Jacob's Smokehouse and Restaurant, is located at 769 W. Fifth St. in LaPlace.

With the back-to-back punch of COVID-19 and Hurricane Ida, chef Jarred I. Zeringue decided it was time to shake things up — and finally get out the cookbook he had been working on for several years.

Zeringue’s "Southern and Smoked: Cajun Cooking through the Seasons" was released last month by Pelican Publishing.

Zeringue said the cookbook is coming out at the perfect time — he’s just getting his restaurant, Wayne Jacob’s Smokehouse and Restaurant, 769 W. Fifth St. in LaPlace, back up and running after the building was devastated by Ida.

“We started serving plate lunches again in April,” Zeringue said. “A lot of locals come in and say, ‘I wish my house was this far along. I’m so glad you’re doing home cooking. I haven’t had home cooking since August because I still don’t have a kitchen.’ It’s humbling.”

Wayne Jacob’s Smokehouse, a long-standing stop even before there was an Andouille Trail, is a 72-year-old business in St. John the Baptist Parish.

Prior to COVID-19, Zeringue had other restaurants in the French Quarter, including Eat New Orleans, which closed during the pandemic. The lack of tourists forced Zeringue, a Vacherie native, to focus his energies closer to his roots and create the comfort food he believed people were craving.

Zeringue’s family has lived, worked and farmed in the River Parishes and nearby New Orleans since the early 1700s.

His new cookbook also celebrates those same roots. With beautiful images (taken by Denny Culbert and Joseph Vidrine) on nearly every page, the 208-page full-color cookbook has the feel of a coffee-table book and features more than 80 recipes.

“I wrote the cookbook in seasons — winter, spring, summer and fall,” Zeringue said. “I tried to highlight seasonal dishes and why we eat what we eat when we eat it. I explain the traditions of why we eat gumbo at Christmas and crawfish for Easter for people who may not be from here or haven’t put two and two together.”

But Zeringue goes beyond the most obvious of Louisiana cuisine.

Whether it’s deer hunting, picking blackberries on the side of the road or the bounty of Creole tomatoes in late spring and early summer, he takes a deep dive at what’s available in the River Parishes that stretch along the levees of the Mississippi between Baton Rouge and New Orleans.

“Beyond looking at just when these things are available, I also worked to give you something to do with the ingredients beyond what you’ve always done,” he said.

Take for example the guy who sells Creole tomatoes across the street from Zeringue’s smoke shop and restaurant.

“I give a few alternative recipes on what to do with okra and Creole tomatoes, and other ingredients as well,” he said.

Additionally, he looks at the diverse mix of people beyond Cajun and Creole, including the German, French, Spanish, African and Native Americans, whose heritages have mingled in the heat and humidity of Louisiana for more than 300 years to produce deliciousness from the largesse that the land and water offers.

In doing so, he draws on his own family history and its traditions, including boucheries.

“My cousin came and brought pictures of my family at a boucherie in 1950. My grandparents were on a date that day,” he said. “I had never seen those pictures before. Creating this cookbook helped me to research where my own family came from and when they arrived here.”

The cookbook is priced at $35 and is widely available. Zeringue has granted permission to share the following seasonal recipes.

Serves 4. Recipe is from "Southern and Smoked."

Note: Do not peel shrimp or remove heads, as the dish will be more flavorful if the shell remains intact.

2. Rinse shrimp and arrange in a baking dish. In a separate bowl, combine the next six ingredients and pour over shrimp.

3. Slice butter and arrange over the seasoned shrimp. Cover with foil and bake for 30 minutes, stirring once halfway through. When done, shrimp should be curled and orange in color, and the shell should be separating from the meat.

4. Serve with fresh French bread and plenty of napkins.

1. Mix all ingredients together.

2. Store in an airtight container.

Makes one (12-inch) tart. Recipe is from "Southern and Smoked."

8 cups fresh fruit of your choice

2. For the crust, mix all ingredients together and press into the bottom and sides of a 12-inch tart pan. Refrigerate about 30 minutes and then prepare filling.

3. To make filling, toss fruit with cornstarch and sugar in a mixing bowl. Arrange fruit onto the crust.

Serves 4. Recipe is from "Southern and Smoked."

3. Arrange in an oven-safe pan or black iron skillet and roast in oven for 15 minutes.

4. While okra is roasting, whisk together all vinaigrette ingredients except oil. Whisk in oil to emulsify, then set aside.

5. Remove roasted okra from oven and top with grape tomatoes, goat cheese, bacon, pecans and lemon shallot vinaigrette. Return to the oven and roast for another 5 minutes. Serve warm.