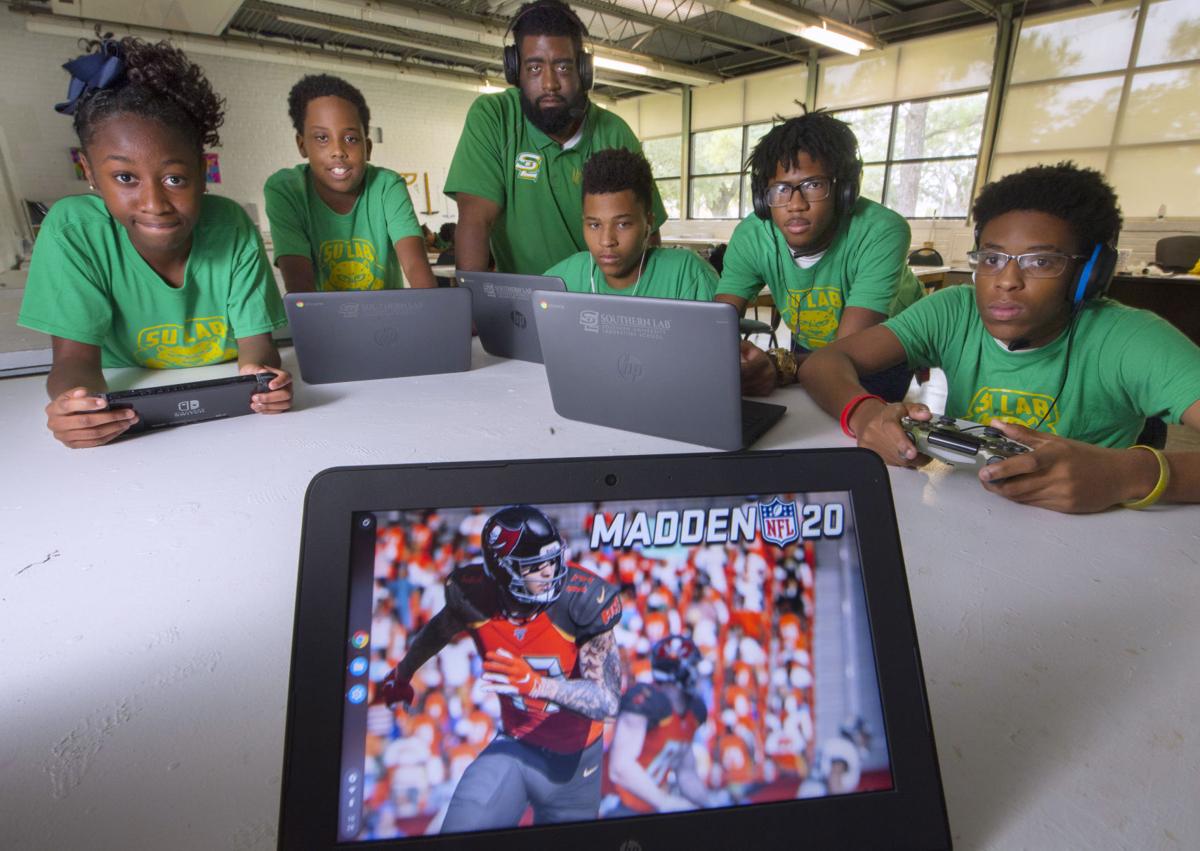 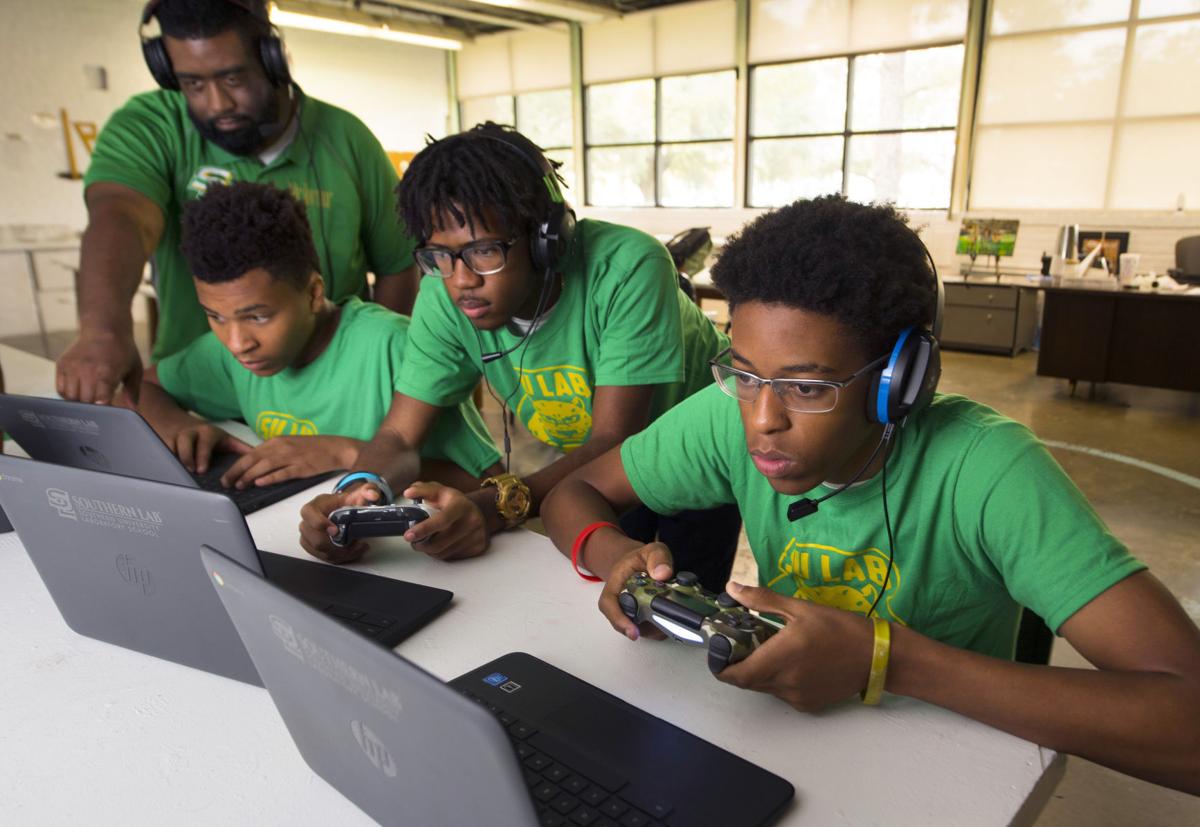 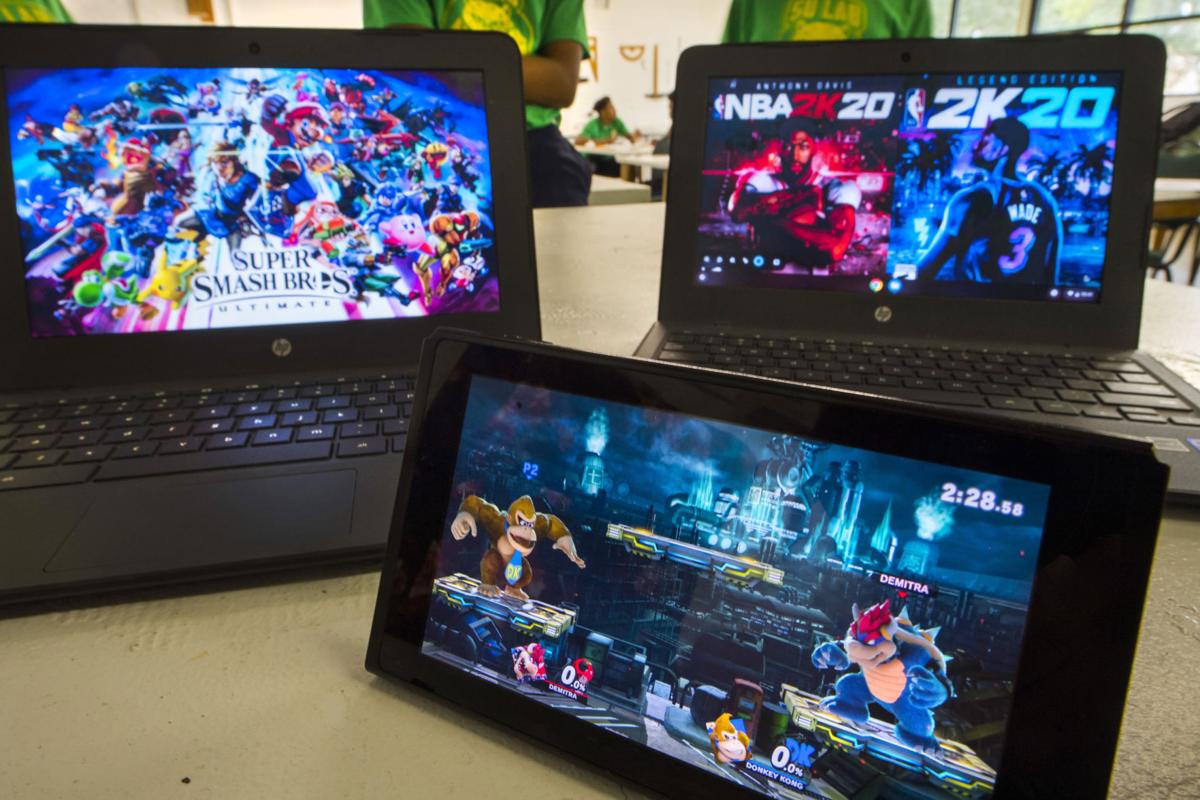 'Super Smash Brothers,' on phone in foreground and left laptop, along with 'NBA2K20' are some of the games high school student gamers play in Esports competition. 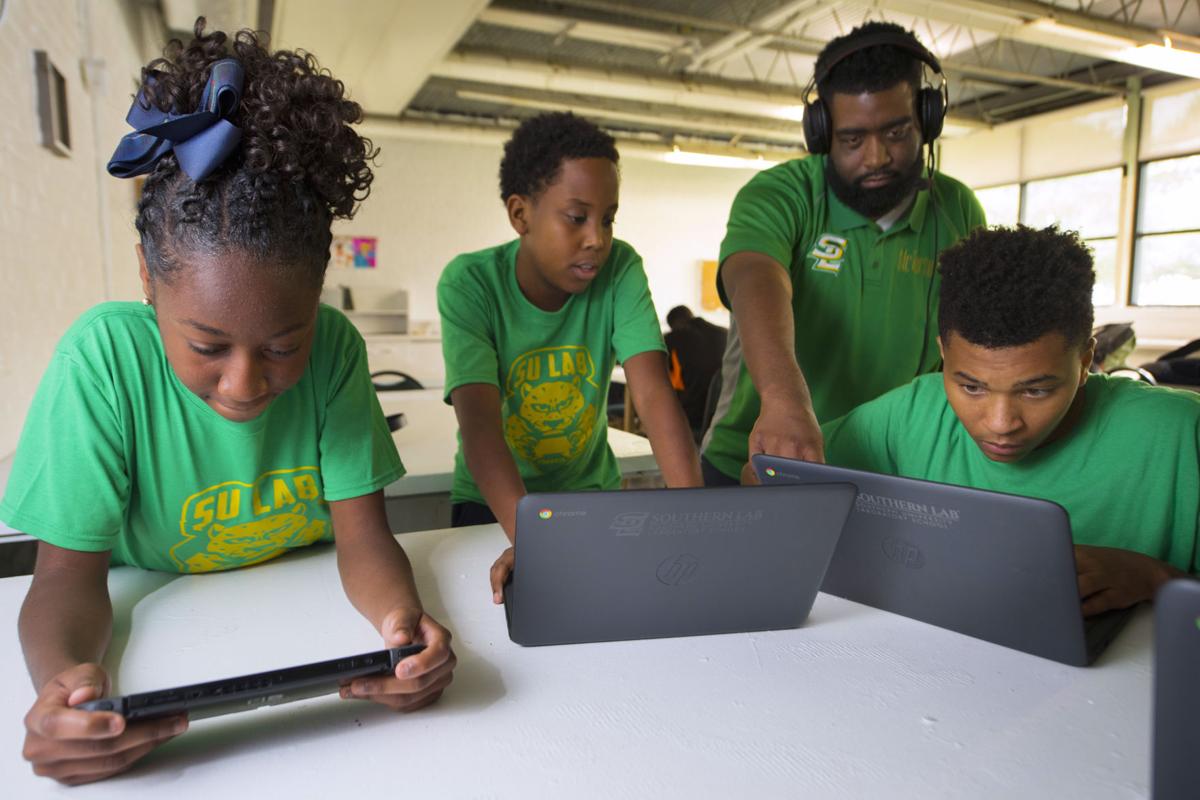 Southern Lab School Esports gaming team members and their adviser coach, from left, Demitra Hawkins, 13; Kameron Tillage, 12; coach Christopher Turner and Dacorion Marioneaux, 15, have all eyes on screens as they check out the games and competition. 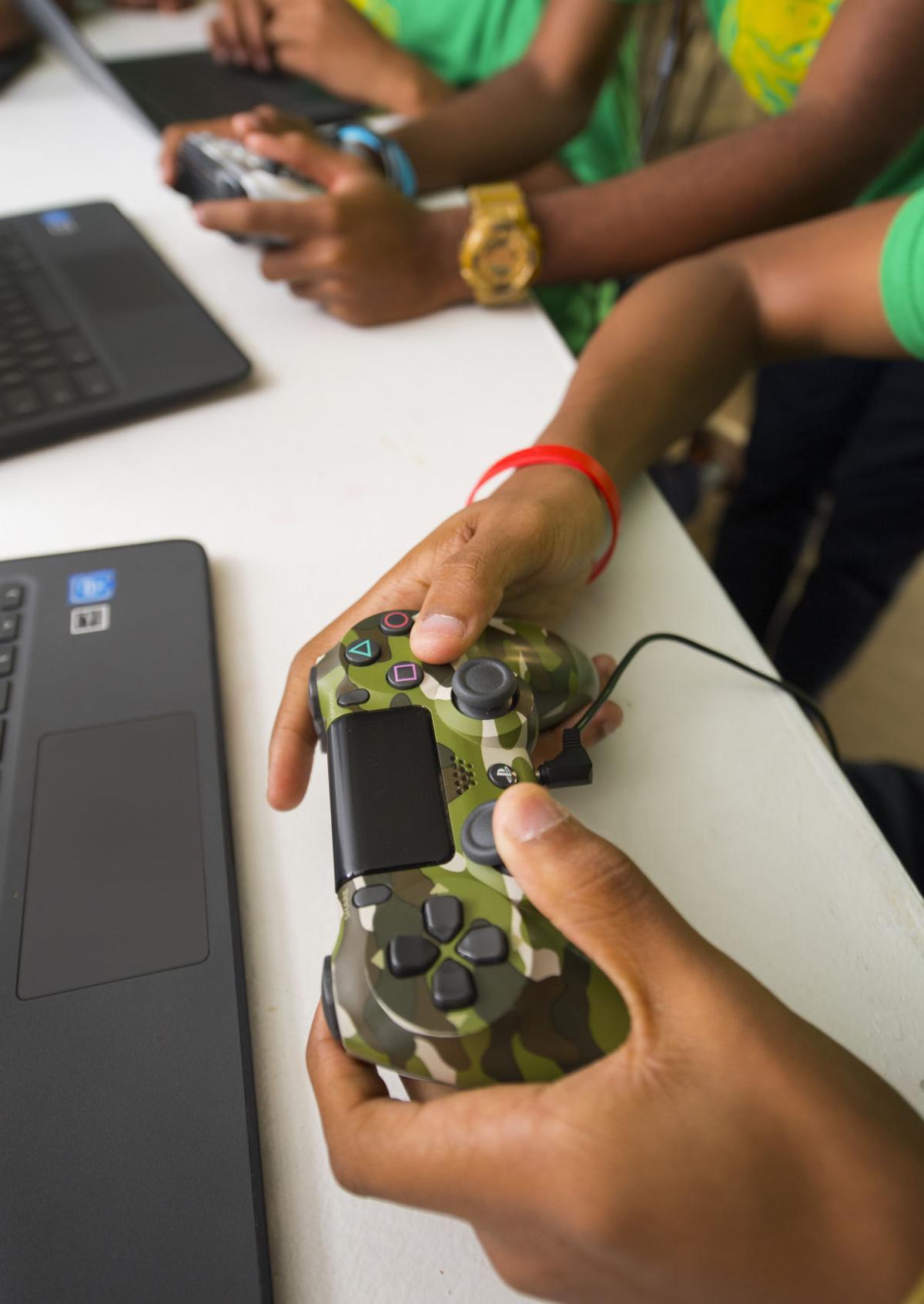 'Super Smash Brothers,' on phone in foreground and left laptop, along with 'NBA2K20' are some of the games high school student gamers play in Esports competition.

Southern Lab School Esports gaming team members and their adviser coach, from left, Demitra Hawkins, 13; Kameron Tillage, 12; coach Christopher Turner and Dacorion Marioneaux, 15, have all eyes on screens as they check out the games and competition.

There's a new team in town, but you won't find it on the football field, basketball court or baseball diamond.

The Southern Lab School High School Esports team huddles in the school's computer room to play video games, taking on some 2,100 teams nationwide, all vying for $30,000 in scholarships.

All are part of the High School Esports League at highschoolesportsleague.com, which began its fall season Sept. 30.

And Southern Lab team members Cornelius Pointer and Robert Adams, both 17-year-old seniors, are already winners in the first round.

"We've definitely gotten off to a good start," said team sponsor Christopher Turner, the school's art teacher. "We know the competition is tough, but we're going to play for the $30,000 in scholarships."

The team uses the school's equipment, although they're conducting a fundraiser to buy gaming computers, consoles and computer tables and chairs. They also can compete from home, something they would probably be doing anyway. But now they're playing toward a goal.

Turner said his daughters introduced him to gaming, and he learned that many of his art students also played.

So he started looking for a way to harness that energy into a school activity. That's when he discovered the High School Esports League, which has turned high school gaming into an organized event.

"This is something they've been doing for fun, but they can benefit from so much by being in this league," Turner said. "They can learn teamwork and strategy, and studies have shown that they can also develop STEM (science, technology, engineering and mathematics) skills. They can also learn about computer codes and game development. This will give them so many opportunities."

Mason Mullenioux, CEO and co-founder of the league, said teams are required to have a teacher sponsor.

"The sponsor will get in touch with us, and we'll verify that they are a teacher and representing a high school team before we sign them up," he said.

Turner first gauged the interest at Southern Lab by forming a gaming club. More than 30 high school students, along with some qualifying eighth graders, have signed up so far, and 13 stepped up to form the esports team.

Like any school team, there's captains — sophomore Dacorion Marioneaux, 15, and junior Cristion Henry, 16. And they wear uniforms — official team shirts in the school's green and gold with a logo of a jaguar playing at a computer console.

Technically, the jaguar is a kitten, the high school's mascot version of Southern University's Jaguar teams, and these kittens are fully supported by Principal Herman Brister Jr.

"This is an official team of the school," Brister said. "This expands the options for our students. It offers them new challenges, and I'm looking forward to watching the progress and enjoyment of our Esports Kittens."

Teams compete within their time zone in tournaments organized through the league's website.

"We have four seasons," Mullenioux said. "The two major seasons are the fall and spring semesters. Both are eight-week seasons like any other sports team's season. Then we have two off seasons during the winter and summer breaks."

It costs the schools $37 per player per season to participate.

Teams can play for national titles in the fall and spring seasons, and, Mullenioux said, the league is planning for the two champion teams to meet this year for the $30,000 in scholarships.

"We're even thinking of doing a televised event of that tournament," he said.

Not bad for a league founded as a hobby. Mullenioux and co-founder Charles Reilly had just graduated college when they started the league.

"It was after the (financial) crash, and we didn't have jobs, so we were delivering pizza," Mullenioux said. "We were both gamers, and we wanted to give something back to the high school community, so we started this."

The league began with individual players but began partnering with high schools as it became more organized. It offers free online "Partner Perks," including packages for club management, an esports curriculum and care packages for local area network parties.

To learn more about the school's FundMyTeam campaign, visit fundmyteam.com/public/campaign/su-lab-esports-2019-fundraising-campaign/aad616ce-07ec-4035-89d8-ccfa1e6773e5.