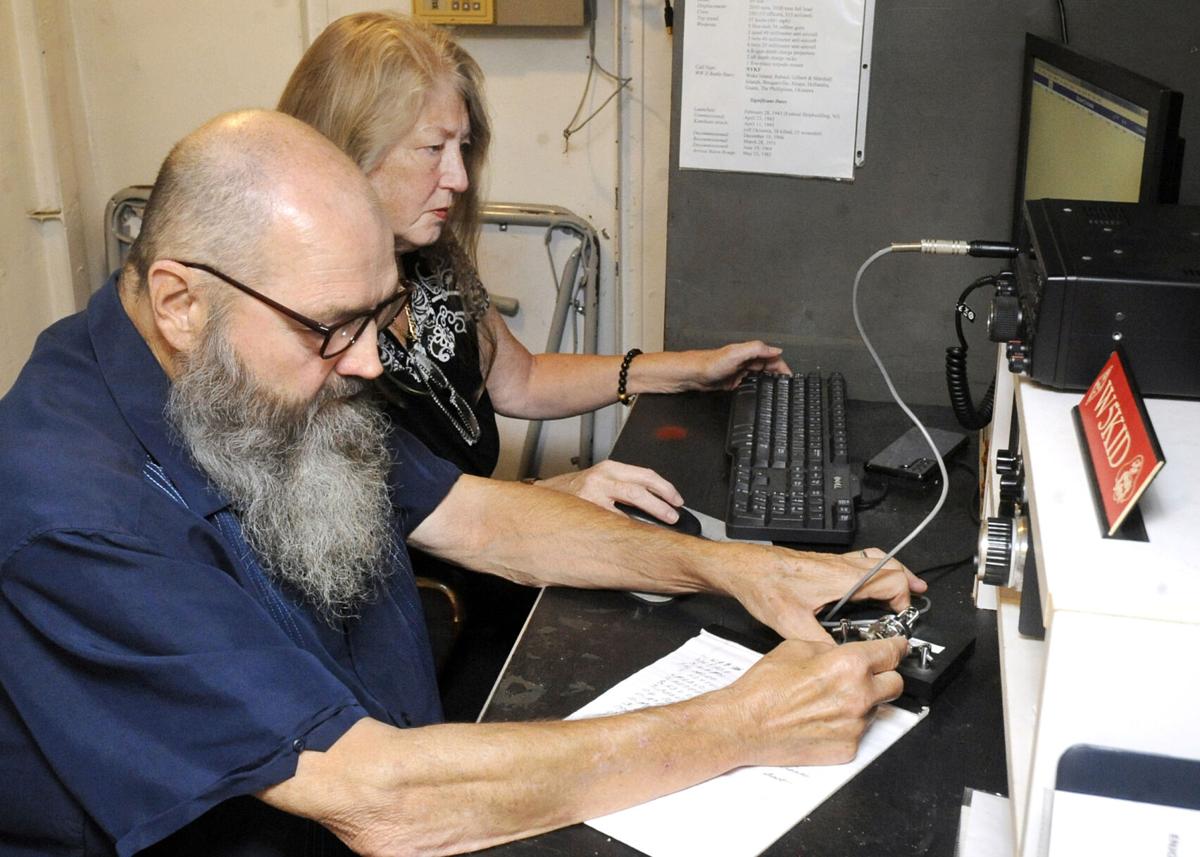 Lee and Dayna Bowman, both members of the Baton Rouge Amateur Radio Club, transmit Morse Code to other radio operators around the country on July 4 aboard the USS Kidd. 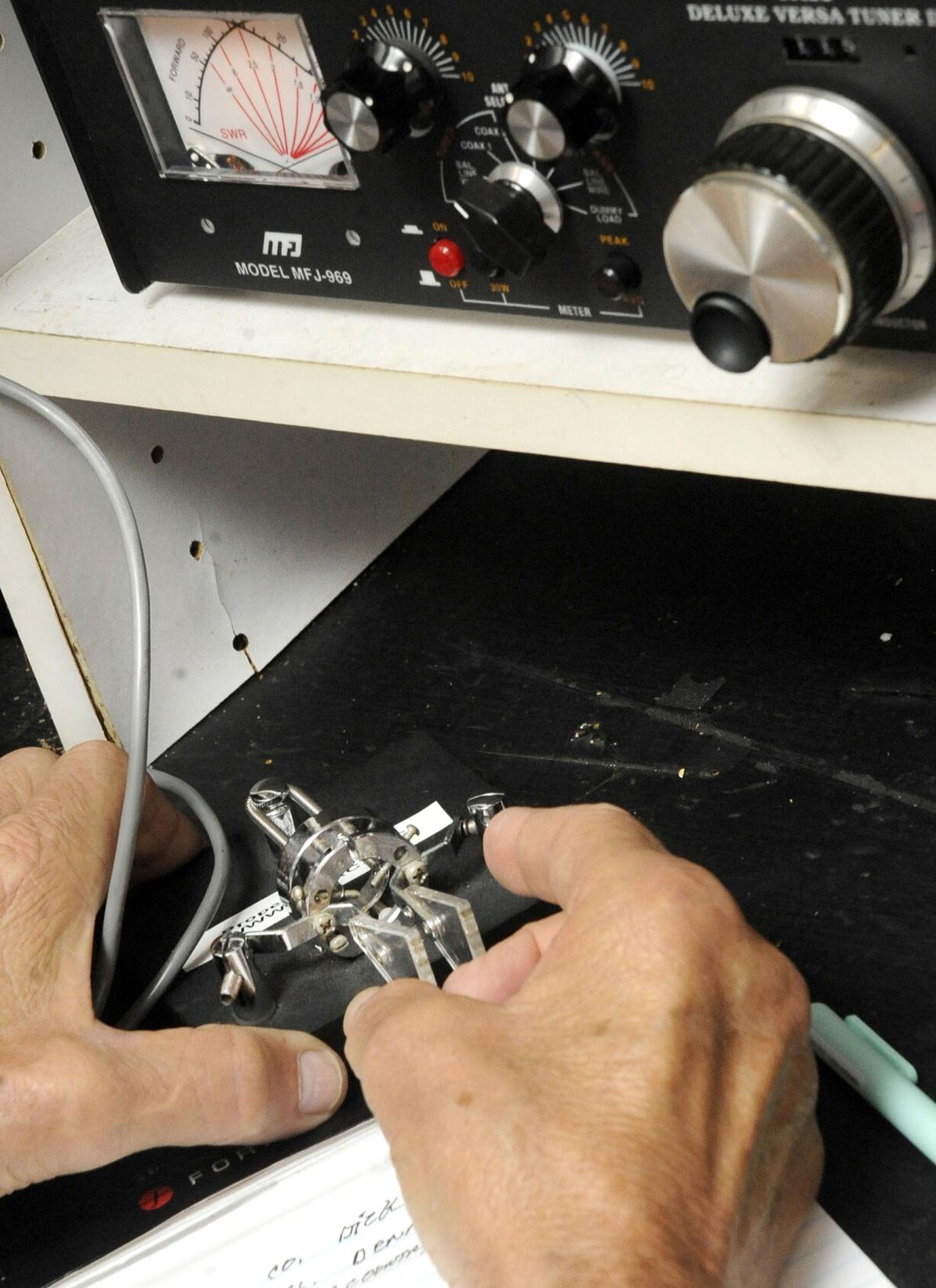 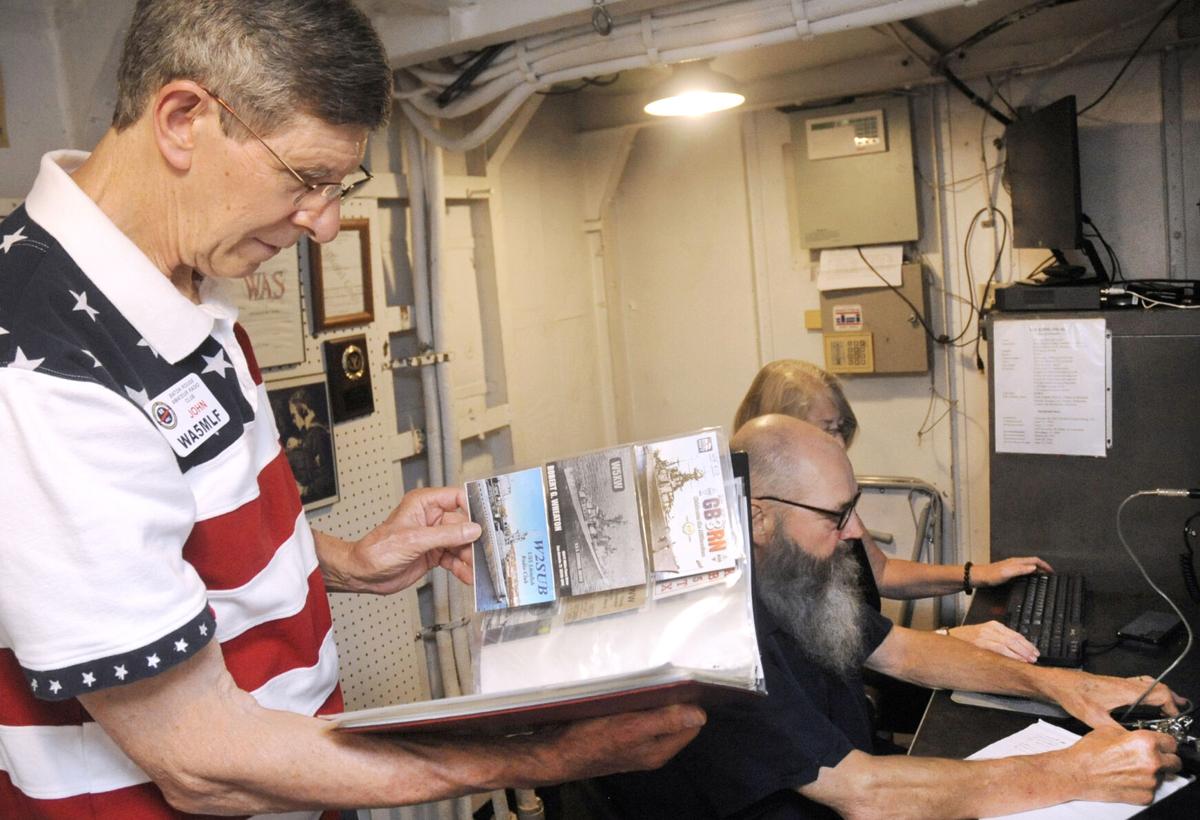 John Krupsky, with the Baton Rouge Amateur Radio Club, looks over QSL cards, which are sent to other radio operators around the world to verify contact between two stations. With him are Lee and Dayna Bowman, who were sending and receiving radio messages on July 4 aboard the USS Kidd.

Lee and Dayna Bowman, both members of the Baton Rouge Amateur Radio Club, transmit Morse Code to other radio operators around the country on July 4 aboard the USS Kidd.

John Krupsky, with the Baton Rouge Amateur Radio Club, looks over QSL cards, which are sent to other radio operators around the world to verify contact between two stations. With him are Lee and Dayna Bowman, who were sending and receiving radio messages on July 4 aboard the USS Kidd.

On July 4, hours before fireworks filled the night sky over the USS Kidd, there were quieter sounds that would have been familiar to those who served aboard the old Navy destroyer.

Connecting with people in 20 states, plus Canada and Mexico, members of the Baton Rouge Amateur Radio Club used the Kidd as a platform to keep alive a form of communication that was vital to the ship in World War II and the Korean War. The club has done this aboard the ship many times, but it was the first time club members could use the Kidd in more than a year because of the COVID pandemic.

“It is to acknowledge and celebrate the contributions of the Kidd and the crew to preserving our freedom,” said club member John Krupsky, who had July 4 radio duties along with Russ London and Lee and Dayna Bowman.

Using their own equipment — the Kidd’s radio equipment no longer functions, though the club does connect to the ship's antenna — members sent and received voice and code messages in a small room behind one of the ship’s forward 5-inch guns. Such opportunities connect Lee Bowman to the job his father had in World War II. Robert Bowman was a radioman second class in the Pacific, where the Kidd also served.

During that war, the Navy sent a continuous stream of encrypted, Morse code messages. Most messages were not pertinent to a particular ship, but when radio operators heard their ship’s code, the message that followed applied to them. If the message was missed, ships were not allowed to request a retransmission.

“You maintained radio silence as far as transmitting so you couldn’t be detected,” said Lee Bowman. “But you copied news bulletins and messages for the captain and decoded them and got them to him. You didn’t do a lot of transmitting; you did a whole lot of receiving.”

The radio club does a fair amount of both on days like July 4 and other events aboard the Kidd, such as the Museum Ships Weekend June 5-6. Amateur radio hobbyists around the world try to make contact with others in hopes of reaching as many countries or ships at sea as possible.

“It’s keeping our skill up,” said club member Thornton Cofield. “We have people who love being on the Kidd because they love making these contacts. What’s the farthest we can make contacts? South America? Portugal? Spain? Japan? … We get a lot of activity in the states and parts of South America.”

For the longest time, amateur radio was almost exclusively in Morse code. The Federal Communications Commission regulates amateur radio in the United States, and passing a Morse code proficiency test was required to get a license. Voice radio has become so prevalent that the Morse code test no longer is required.

But if Morse code is going the way of cursive writing, its aficionados still enjoy it.

“When they open these shelters during hurricanes, we have volunteers that come in,” Cofield said. “One or two past hurricanes, we were the contact person when the shelter started flooding. We had an amateur radio operator out there, and he communicated and notified the people that this is where we’re going to have to go before it gets worse.”

But events like July 4 make the club more visible to a public that otherwise may never encounter amateur radio. It’s also beneficial to the Kidd museum, said Rosehn Gipe, the Kidd’s executive director. She said most ship museum partners with ham radio operators.

“It’s just another market, I guess you would call it, that we are able to tap into,” Gipe said. “Because of the radio operators, they’re getting the word out about the USS Kidd being here, just spreading the word.

“It’s a really interesting world, a world unto itself, if you haven’t been involved with it. Just like other hobbyists, you may not realize the number of people involved in it and people from all different walks of life involved in it. It’s another group we can appeal to because of the type of equipment that’s on board and the appeal of the technology.”

Red, white and blue: Think you know the American flag? Take our quiz to test your knowledge

Nothing is more integral to the United States' 245th birthday celebration than the American flag. But how much do you know about it?