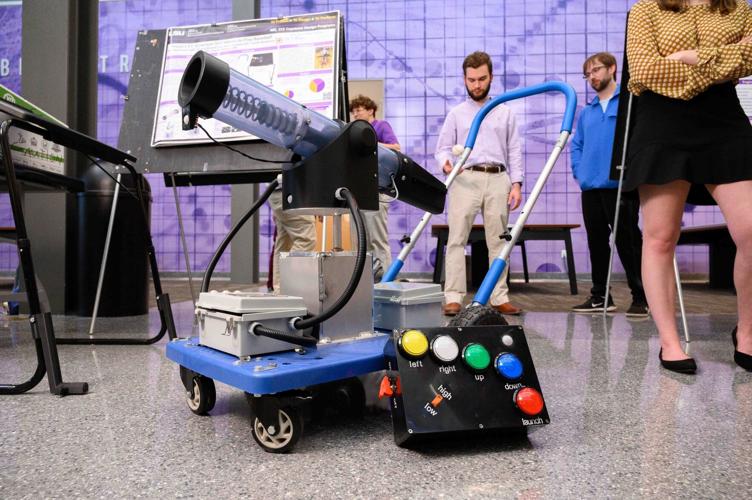 A team of seniors in the LSU College of Engineering designed this ball launcher as its capstone project for the 2021-'22 school year. 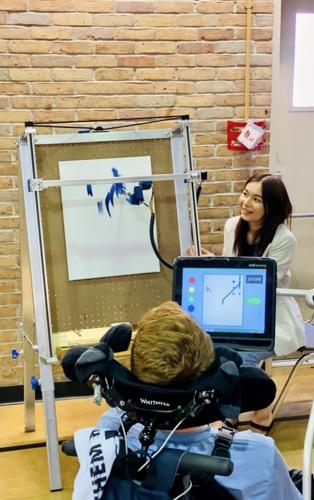 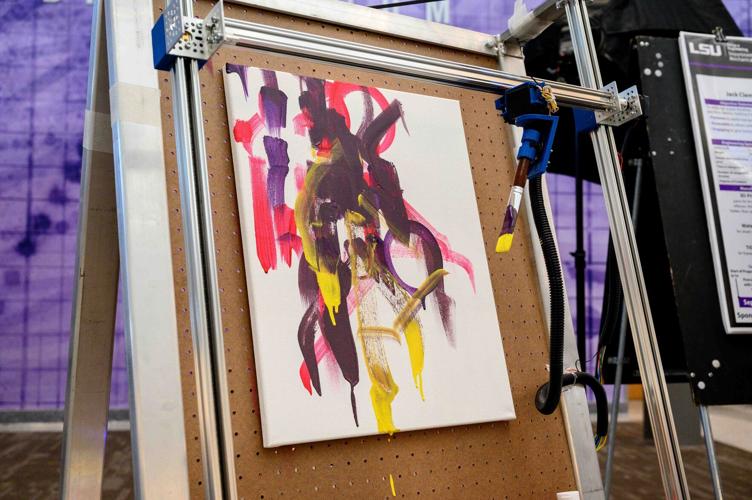 William Bradford created this painting with the 'Art-Eaux-Matic,' a capstone design project by a team of seniors in the LSU College of Engineering. 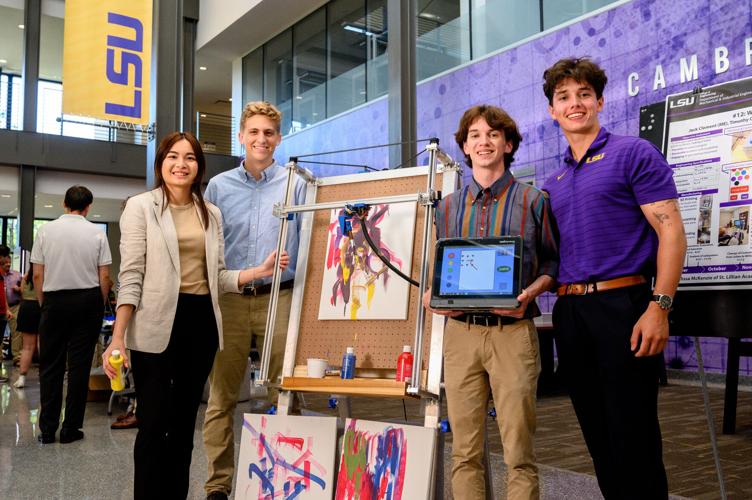 From left, LSU College of Engineering seniors Emily Vu, Jack Clement, Timothy Curol and Ewan Robertson stand next to their capstone design project, the 'Art-Eaux-Matic.' The device was designed for William Bradford, who has cerebral palsy. 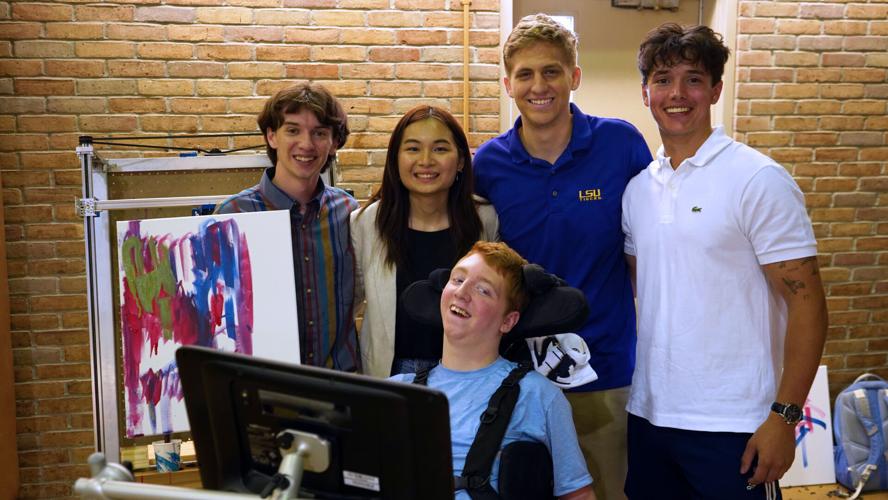 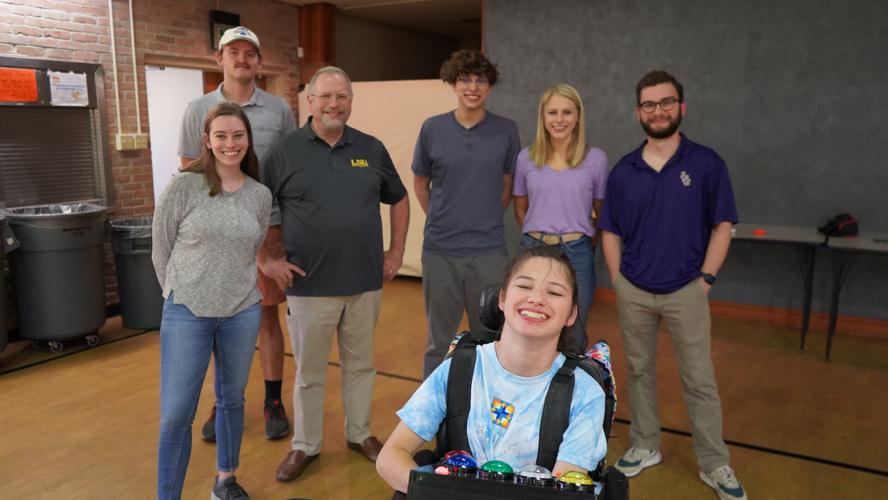 Emerson Allen could throw a baseball. Not a big deal, you say? Well, don't tell that to Emerson.

The 15-year-old girl has quadriplegic cerebral palsy, a disease that severely limits her movement and use of her limbs. She has only partial movement in her left hand, meaning she could never hold a baseball, much less achieve her dream of throwing one.

That is, until a team of seniors in LSU's Department of Mechanical Engineering came together to make her dream come true.

The team accepted the challenge as its capstone design project. In the College of Engineering, teams apply what they learned to a hands-on project in their senior year. In this case, they worked with St. Lillian Academy co-founder Elissa McKenzie in building a ball launcher for Allen.

Meanwhile, another team worked with McKenzie in creating an "Art-Eaux-Matic" for 20-year-old William Bradford, a former student at Our Lady of the Lake Children’s Hospital Children’s Developmental Center at McMains.

Bradford not only has cerebral palsy but also a desire to be an artist. Yet his movement also is limited, so another capstone group spent the school year creating what has become known as the Art-Eaux-Matic, an app and device which allows him to paint.

And the Art-Eaux-Matic entails more than simply drawing colorful lines on an iPad. Whatever Bradford paints on his smart screen through head and eye movements is directed to a device, which directs a paintbrush to duplicate Bradford's lines and shapes on canvas.

Emily Vu remembers Bradford's smile when he first used the device. It was better than the "A" she received from her professors.

"It made it all worthwhile," the Metairie resident said. "He was so happy."

The team began working on the project at the beginning of the fall semester last August, as did the seniors that created Emerson's ball launcher.

Technically, with the exception of Robertson, these students are no longer seniors as they all graduated in May. Some have already lined up jobs; others are opting for graduate school.

But their goals of completing their capstone design projects before graduation morphed into something bigger: They realized their skills could be used to enhance the lives of those with disabilities.

"If given the chance, I would definitely work on another project to help someone like Emerson," Shepherd said. "It was so great to see her joy."

That's the happy ending of this story, which began with McKenzie at St. Lillian Academy, a faith-based school founded by professionals and parents for children with communication and learning challenges.

The school's goal is to give its students an opportunity to achieve their full potential so they can enjoy rewarding lives as independent and engaged members of the community.

McKenzie knew Emerson wanted to be a part of school activities and participate on her Miracle League baseball team. So, she asked the College of Engineering if the new crop of seniors could build something for Emerson, allowing the teen to participate in baseball games.

“Every year for the past 10 years, I submit a number of projects to the capstone groups,” McKenzie said. “We’ve done numerous projects with LSU, and the capstone teams have always come up with such amazing and creative ideas that have helped some of our students. What these LSU Engineering students do for us is incredible.”

McKenzie began working with the college long before she helped found St. Lillian. She's a physical therapist, and she was working with students at Our Lady of the Lake Children's Hospital Developmental Center at McMains. That's when she met Bradford and discovered his love of art.

So, she submitted another request to LSU Engineering, this time asking for a device that would help Bradford realize his aspiration to become an artist.

For Bradford, that dream came true in early May while testing his team's final product. With a computer screen attached to his wheelchair, Bradford uses his eyes and head to choose colors and “tell” the paintbrush which direction to move on the screen. This sends a signal to the mechanical paintbrush, which mimics Bradford's screen brushstrokes on an actual canvas.

Vu worked with Curol on the codes for the app and for moving the motors, while Clement and Robertson worked on making the brush move. Clement created the device that rotates the brush on and off the canvas, and Robertson designed the part that moves the brush up and down or side to side on the canvas.

"It had been done before, but the idea was to kind of redesign an old version of it into something that I feel like is very unique and something that hadn't been done regularly," Clement said. "There was a lot of potential to improve upon and just make it a lot better, which ended up being a really awesome project and really fun for me to work on."

“William has always loved to paint,” Bradford’s mother, Anne Marie, told LSU Engineering. “This now gives him the opportunity to do things without so much of my help and him doing it solely on his own, which he likes. This is such an amazing success and win for all kids with a disability.”

As for the ball launcher, Emerson's team not only created a way for her to throw a softball or baseball, but also participate in the game.

"The first time we went, we played just us and not the students just to make sure that it was safe," Shepherd said. "And Emerson would say, 'Molly, go out there; Thomas, go out there; Camille, go out there' — she would pick which of our teammates to go out there, tell us where to go, then aim the ball to us."

And the device worked. After months of trial and error, scrapping original plans and redesigning the device to fit Emerson's range of motion, everything came together.

Shepherd knew the project wasn't anything new, but her team reimagined it.

"We decided to do it in a way that nobody had done it before," she said. "And so we made it kind of like a pinball machine. And we ultimately decided the controller that Emerson uses would have four directional buttons, a launch button, and a switch to choose between like a high and low force launch."

The launcher is a two-part system that uses a motorized PVC pipe and controller. The 3-foot by 3-foot device acts as a giant pinball plunger attached to a motor and linear actuator that can be programmed for ball-launch distance by using a high-low switch.

Emerson chose the colors for each command button on the controller, with red as the launch color. The team also added safety sensors so that the ball launcher won’t work if anyone is within 10 feet of its front.

St. Lillian will keep the launcher device at the school for Emerson and other students who may be able to use it in the future.

And for Emerson and Bradford, the future happened suddenly through LSU Engineering, allowing them a way to overcome disabilities and realize dreams.