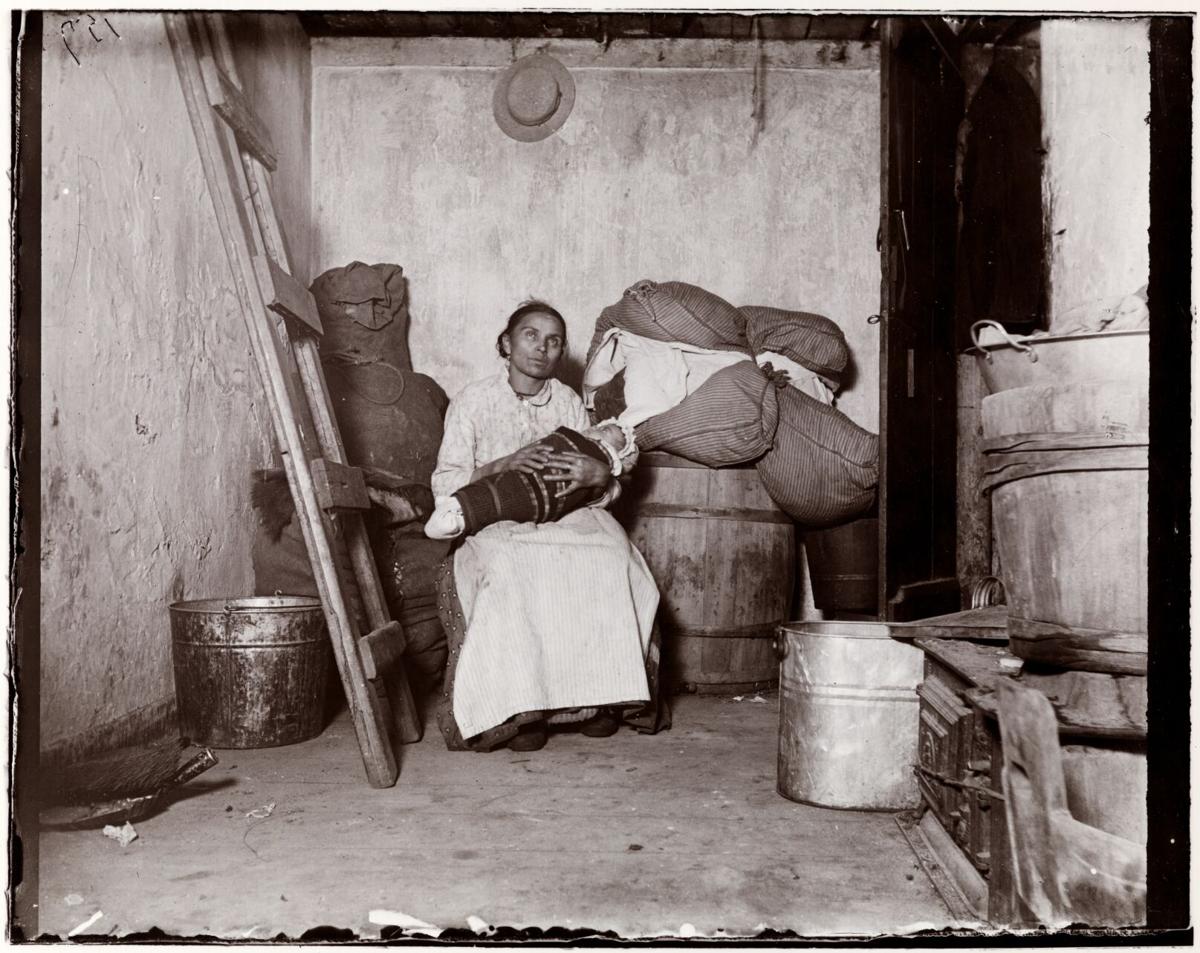 Jacob A. Riis' gritty photos brought to light the poverty in which many immigrants lived in New York. He called this shot, taken around 1888-89, 'Italian Mother and Her Baby in Jersey Street.' 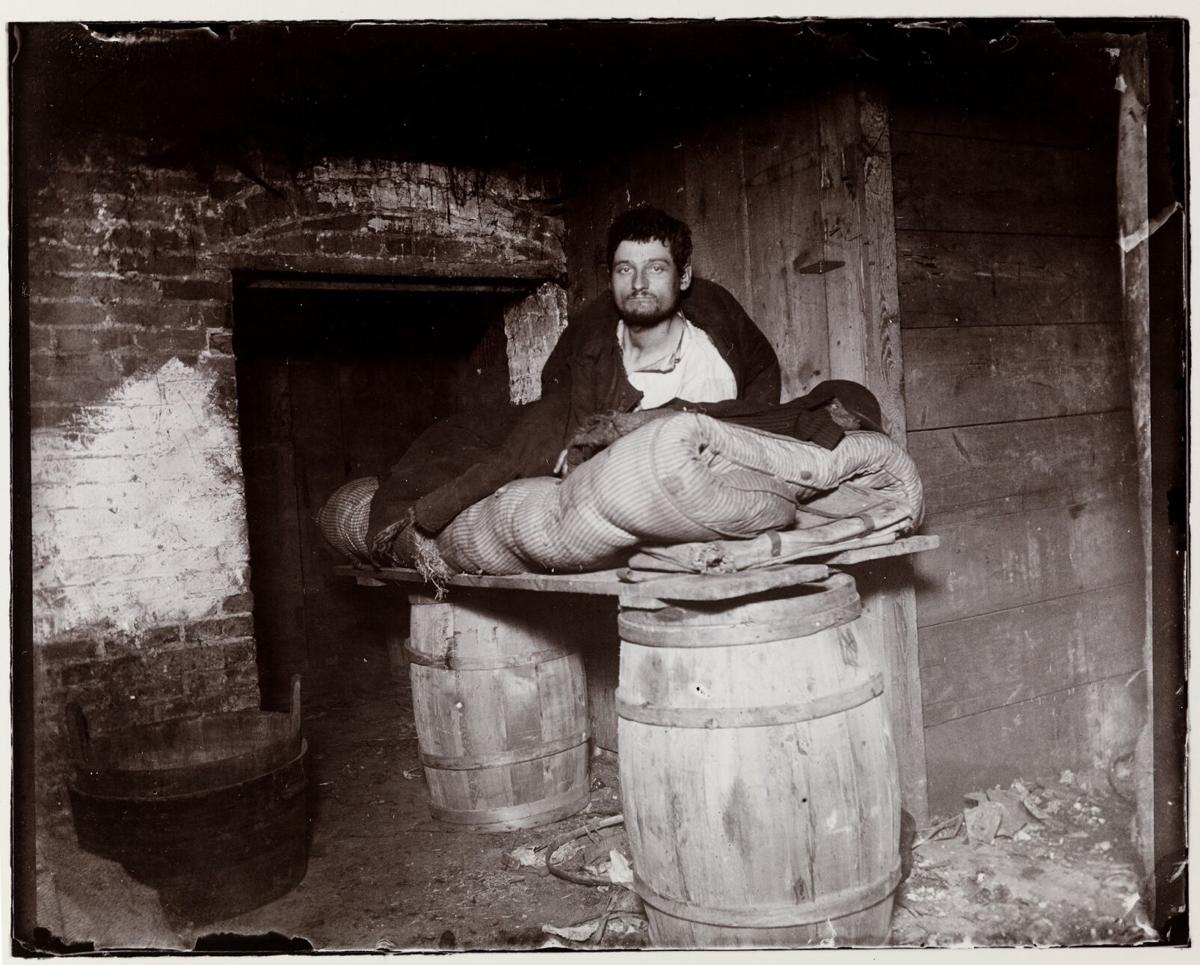 With his stark photos of the destitute circumstances in which people lived in the early 1890s in New York, Jacob A. Riis influenced social reforms, politics and journalism. 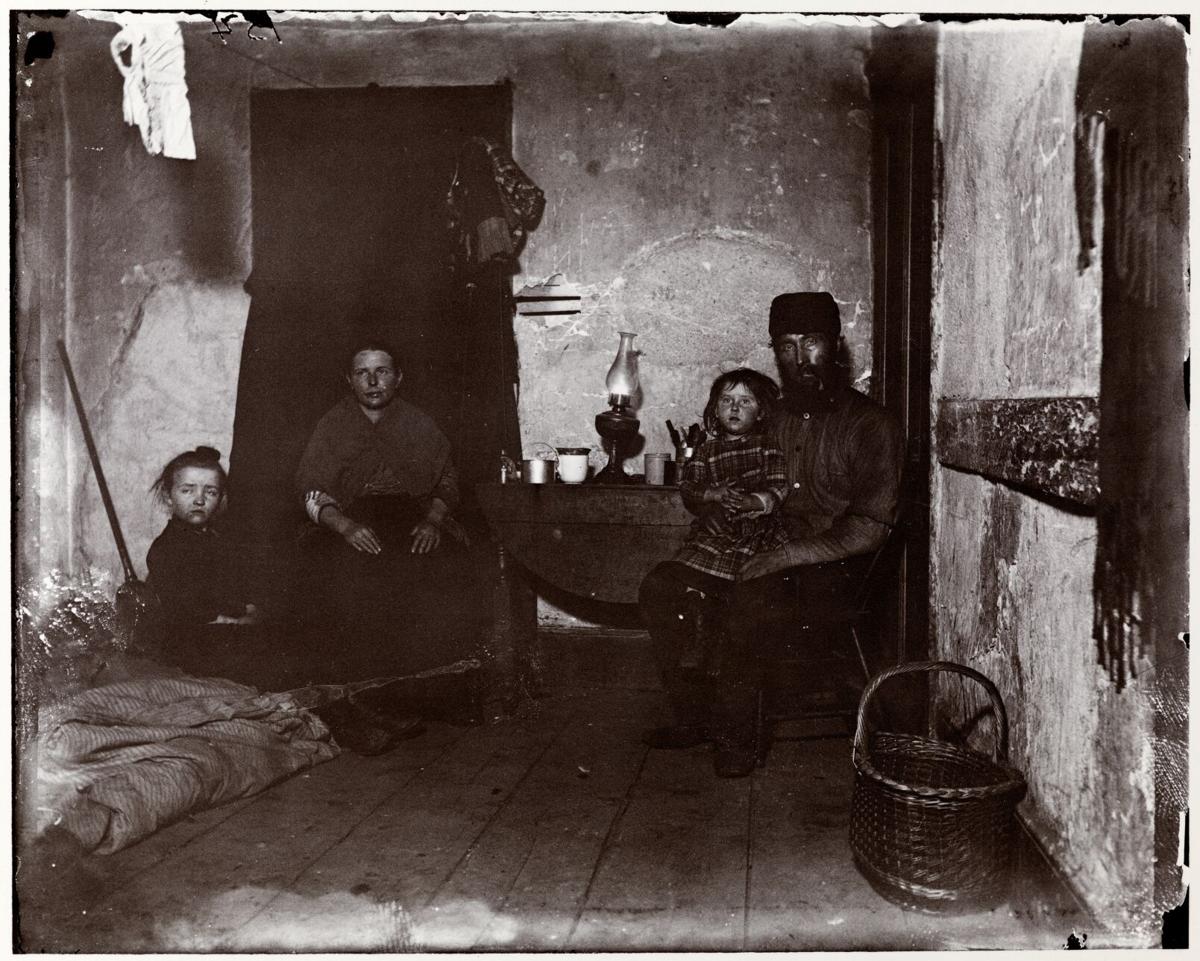 Called 'Poverty Gap,' this photo by Jacob A. Riis, taken between 1888 and 1889, brought to light the incredible poverty of immigrants in New York City. 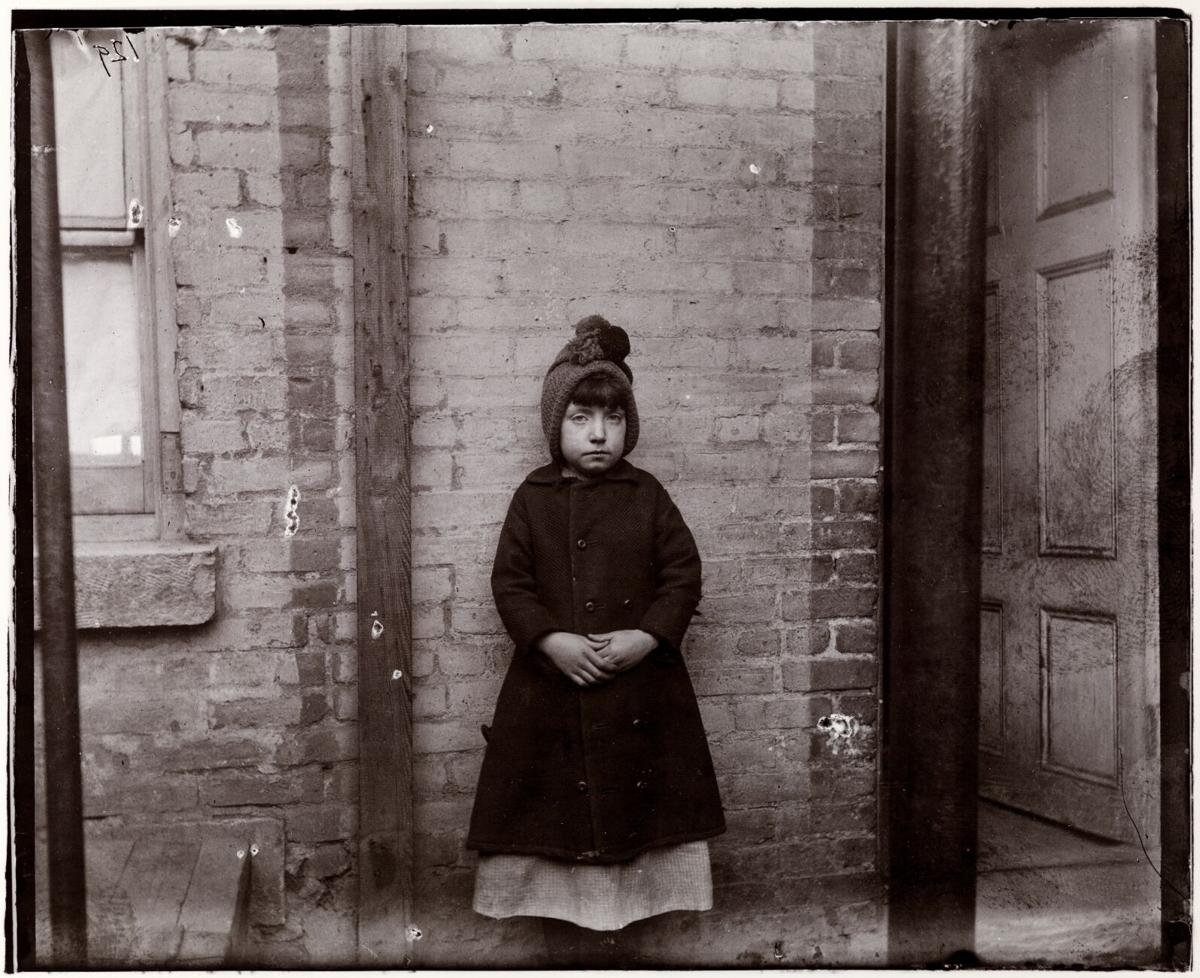 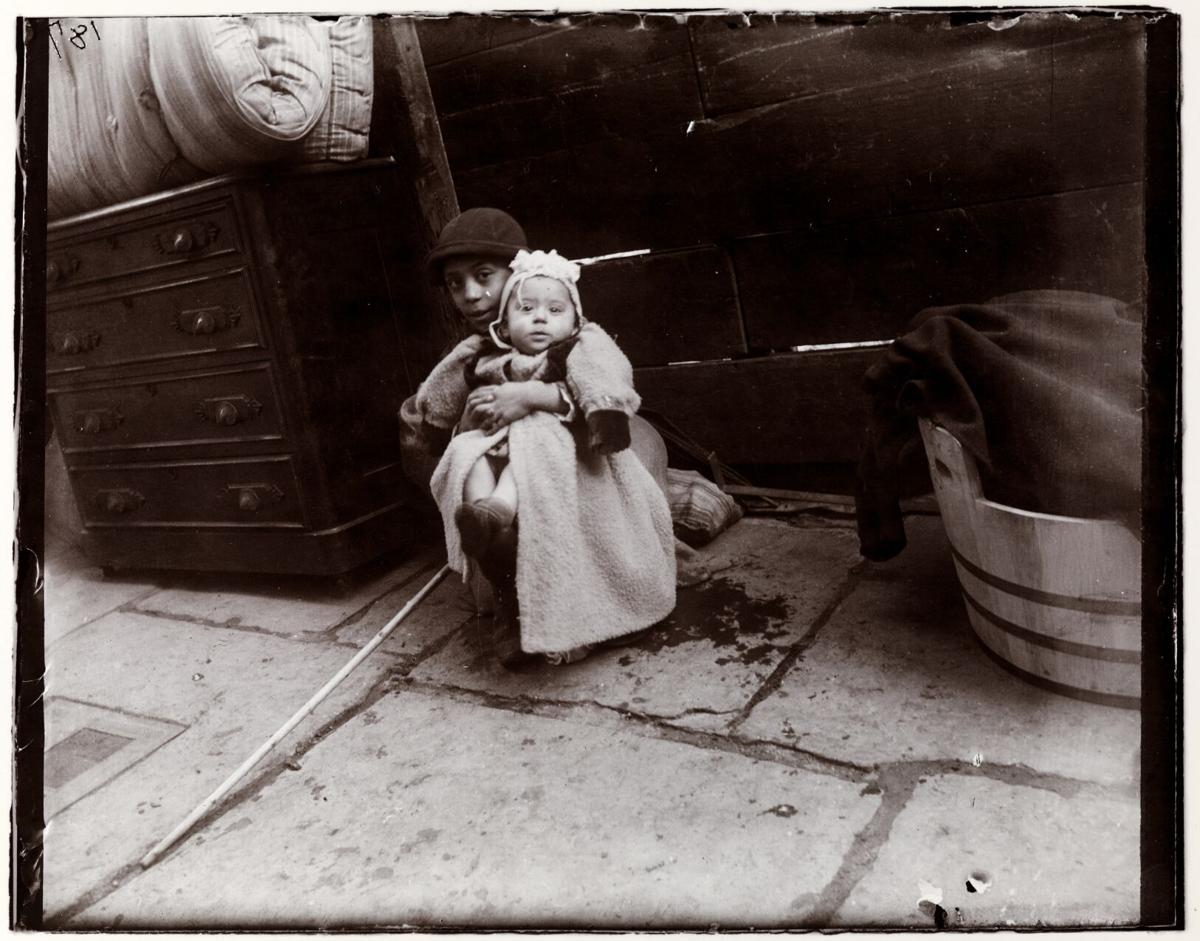 Taken in 1892, Jacob A. Riis called this photo 'Minding the Baby, Cherry Hill,' a snapshot of the poverty in which many immigrants lived in New York.

Jacob A. Riis' gritty photos brought to light the poverty in which many immigrants lived in New York. He called this shot, taken around 1888-89, 'Italian Mother and Her Baby in Jersey Street.'

With his stark photos of the destitute circumstances in which people lived in the early 1890s in New York, Jacob A. Riis influenced social reforms, politics and journalism.

Called 'Poverty Gap,' this photo by Jacob A. Riis, taken between 1888 and 1889, brought to light the incredible poverty of immigrants in New York City.

Taken in 1892, Jacob A. Riis called this photo 'Minding the Baby, Cherry Hill,' a snapshot of the poverty in which many immigrants lived in New York.

Jacob A. Riis didn't set out to be a social activist. He just wanted to tell a good story.

But the more he delved into that story, the more he realized there was a world that ran parallel to his own, where people lived in squalor, where they worked hard to just survive the day.

He called these people "the other half."

As a newspaper reporter, Riis told their stories. But his true legacy is the photographs he took of New York's impoverished communities at the turn of the 20th century. Louisiana's Old State Capitol is showcasing the incredibly stark and moving images in the exhibit, "How the Other Half Lives," through March 13.

What were those women in the picture thinking as they watched Gov. John M. Parker take office back in 1920?

The exhibit is named for Riis' book of the same title, first published in 1890. The book would change social reform efforts as well as politics and journalism.

"These photos moved people who had no idea that their fellow citizens were living like this," said Caroline Kennedy, the OSC's educational consultant. "Riis' photographs brought about safety nets for homelessness and people living in poverty, they improved living conditions for children and prompted regulations for decent wages."

The traveling exhibit is organized by the Museum of the City of New York and sponsored by the National Endowment for the Humanities' On the Road Program. The photos, reproduced from Riis' original negatives, are raw and gritty.

"Jacob Riis was an immigrant from Denmark," Kennedy said. "He was 20 years old when he came to New York in 1869, and he started working as the crime beat reporter for the New York Tribune."

His work opened his eyes to the plight of his fellow immigrants, people who had come to the United States with high hopes, but who found themselves in the poorest of circumstances.

"These people were literally homeless," Kennedy said. "And it was through Jacob Riis' photographs that this poverty would come to light. It would change politics forever."

One fan of his book was New York's newly appointed police Commissioner Theodore Roosevelt, who would later become president of the United States.

Roosevelt, out to reform the police department, left a one-sentence note in Riis' office after reading "How the Other Half Lives."

"It said, 'I have read your book, and I have come to help,'" Kennedy said. "The two became friends, and later Riis advised Mayor William Strong on housing legislation."

Riis, however, did not think of himself as political, saying he took his photographs to make people aware of what was happening.

"He didn't think about the legacy they (his photos) would leave," Kennedy said. "After his death, a treasure trove of his earlier photos were found, and the NEH put them together, along with other photos from his career, in this exhibition that has been traveling the country for two years and is now at the Old State Capitol."

"In Celebration of Women,” an art exhibit created by the Contemporary Fiber Artists of Louisiana, is the latest show in a series celebrating w…

The exhibit discusses Riis' photos in the context of his time and explains the photography techniques he used.

Riis wanted his photos to capture real life, so he would venture into the immigrant sections of town in the evenings.

"He'd take pictures of how people were sleeping," Kennedy said. "And he'd show how they lived, their lack of plumbing and lack of circulating air. He'd use flash photography that would illuminate the room for a few seconds, which showed blank faces awakened by bright light. That's what he would capture."

And though Riis produced his work in New York, it has a direct connection to Louisiana.

Riis often presented slideshows of his work to educate people about the slums. At the end of the exhibit, there is a reproduction of one such slideshow with a recording of his voice talking about people who were influenced by his photos and helped make changes.

One such person was New York socialite Mary Fitzgibbons, who promised God that if he healed her of Asiatic cholera, she would devote her life to helping impoverished children. She recovered, joined the Sisters of Charity and founded an orphanage, which worked with the Catholic Church’s nationwide network to pair orphans with new families.

The children left the city's desolate slums on what is now known as the Orphan Train. Many of them ended up in Louisiana.

"We have a dress from one of the girls who came to Opelousas on the Orphan Train," Kennedy said. "It's on loan from the Orphan Train Museum in Opelousas. Many of the children weren't paired with families right away. This girl was indentured to a family in south Louisiana. We are a political museum, but we're also trying to connect the Riis exhibit not just to politics but to Louisiana."

Jacob A. Riis: How the Other Half Lives

Sitting pretty: New LSU Museum of Art exhibit looks at 200 years of American design in 'The Art of Seating'

The LSU Museum of Art's newest exhibit focuses on chairs.