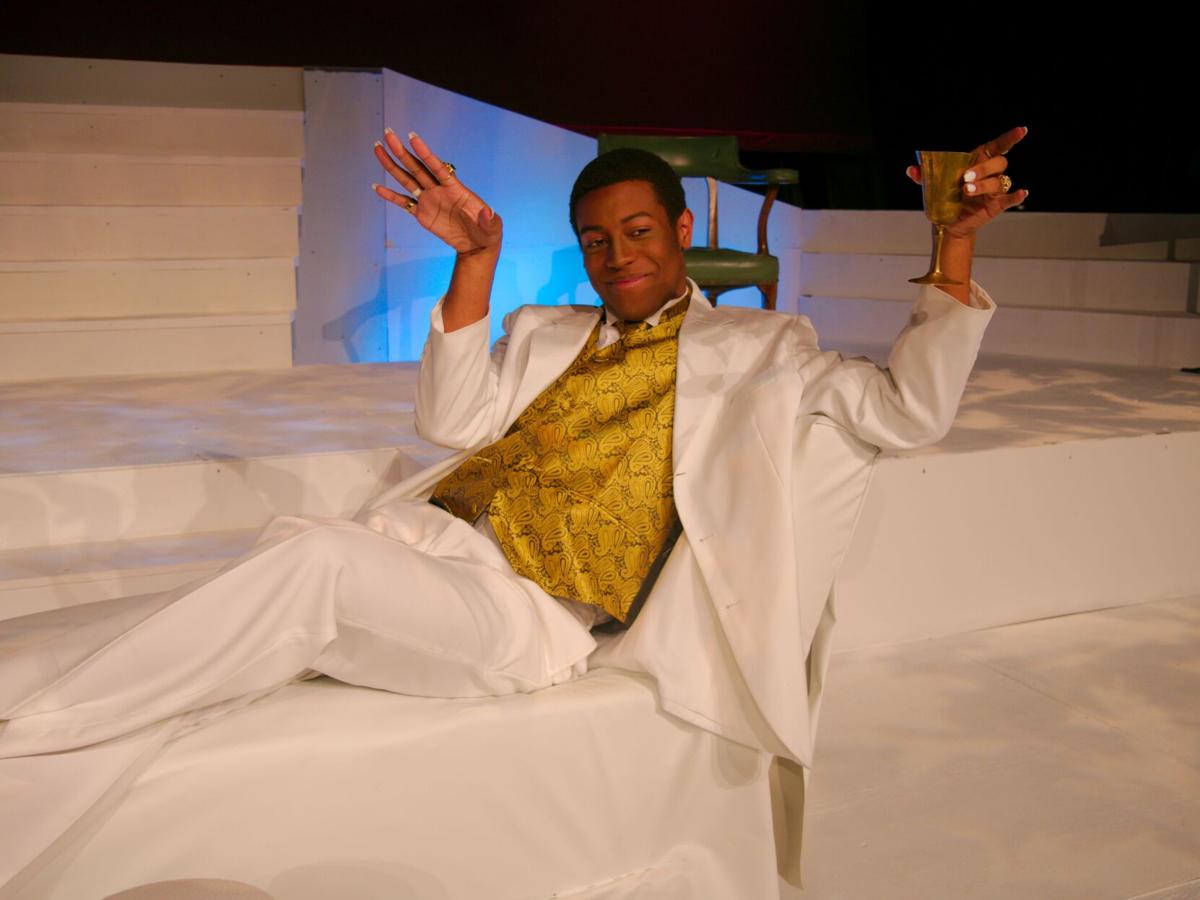 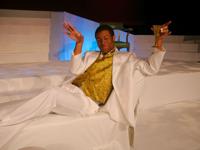 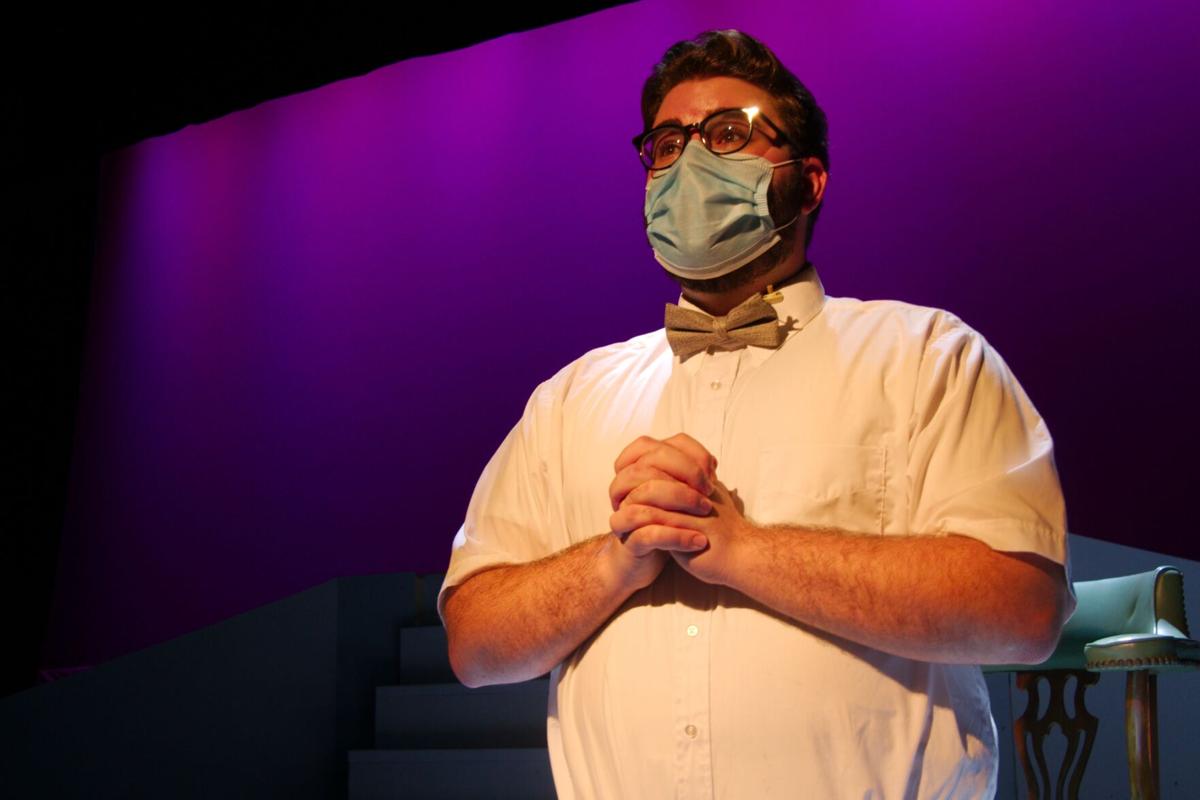 Jonathan Thomas, as the archangel Gabriel, is one of a cast of only three in Theatre Baton Rouge's 'An Act of God.' 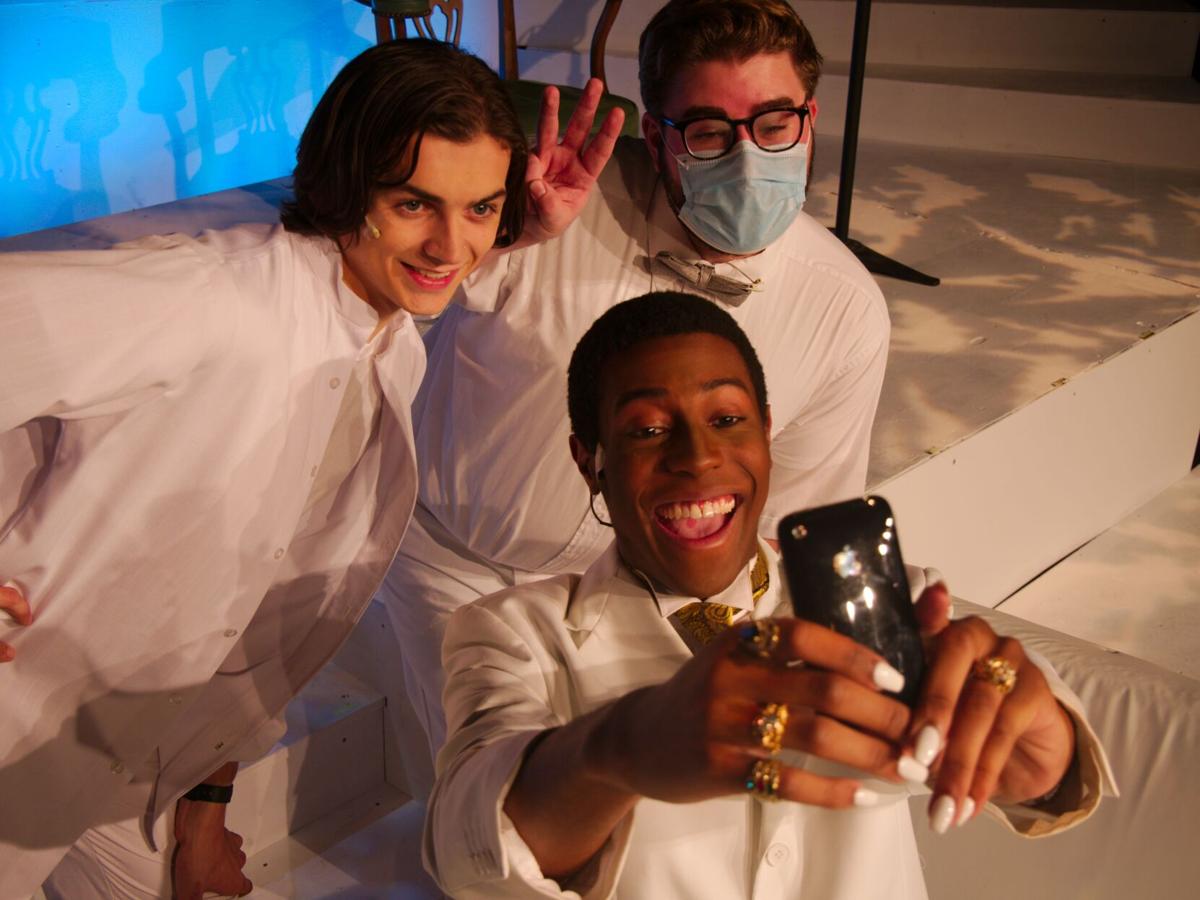 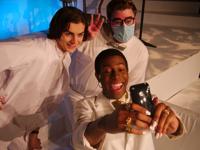 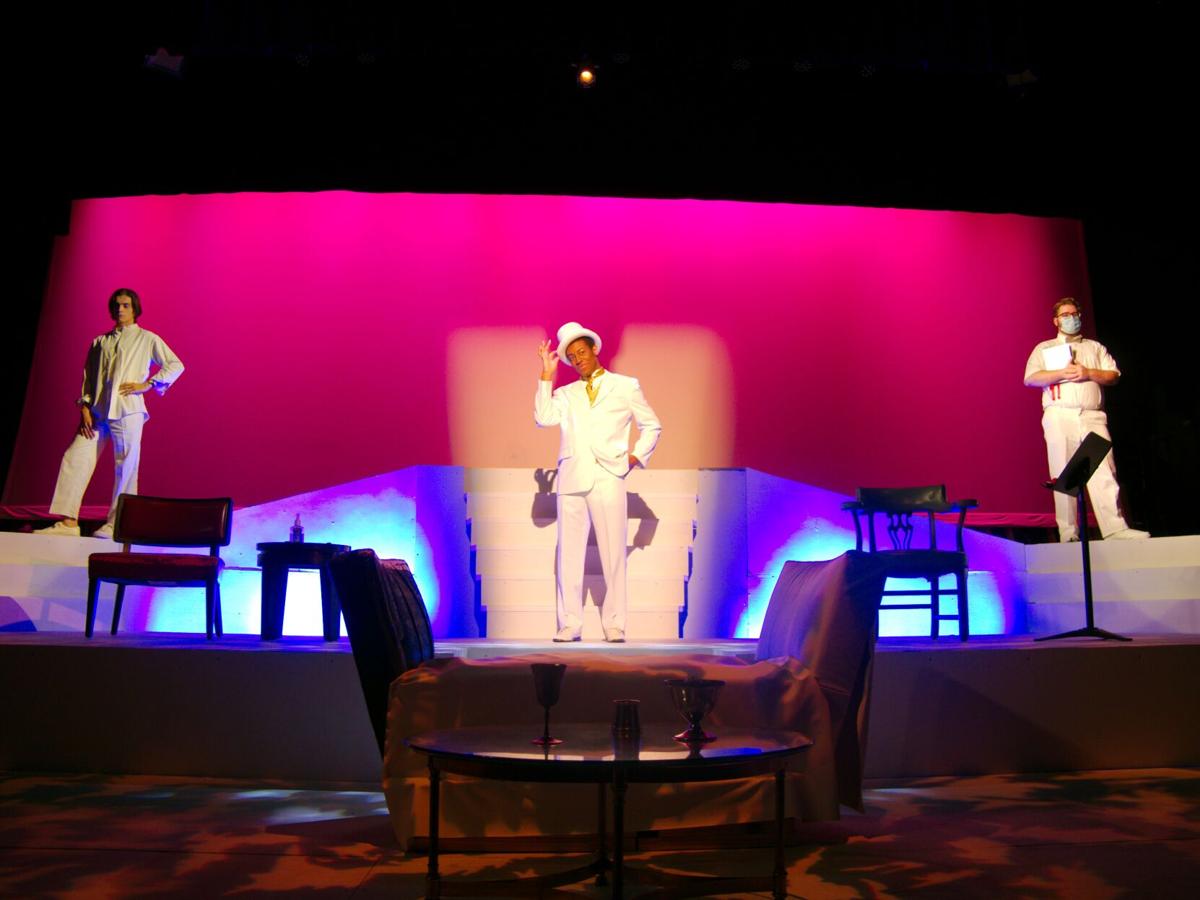 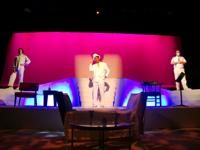 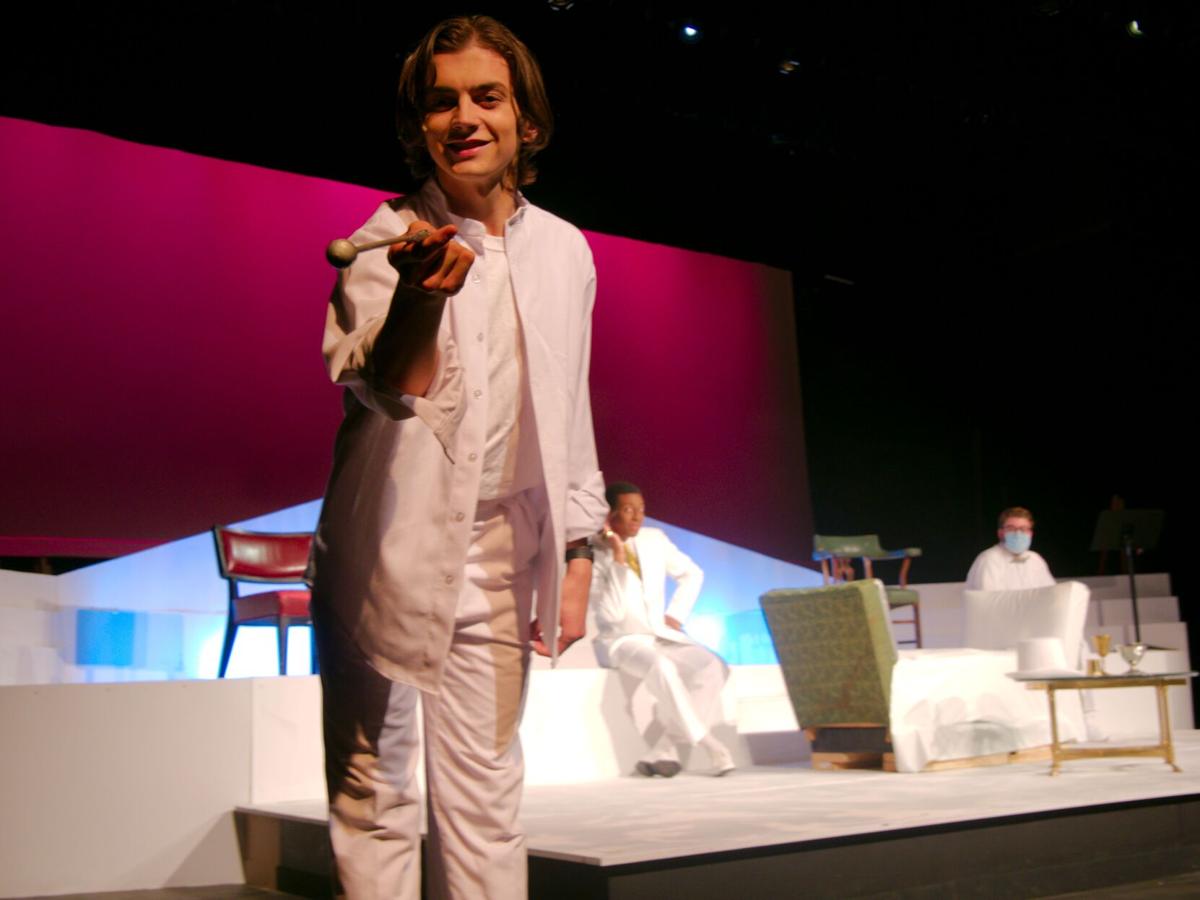 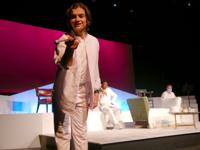 Dalton Major, as the archangel Michael, helps feed questions to God in Theatre Baton Rouge's 'An Act of God.'

Jonathan Thomas, as the archangel Gabriel, is one of a cast of only three in Theatre Baton Rouge's 'An Act of God.'

Dalton Major, as the archangel Michael, helps feed questions to God in Theatre Baton Rouge's 'An Act of God.'

And in 90 minutes, some of the deepest questions plaguing mankind since the beginning of creation are resolved in Theatre Baton Rouge's production, "An Act of God."

The David Javerbaum comedy opens Friday on the Main Stage, 7155 Florida Blvd., and runs this weekend and Nov. 19-22 for seven performances.

Theatre Baton Rouge was forced to rethink its 2020-21 schedule after the coronavirus pandemic settled in. Plays with large casts were traded for shows with smaller casts, allowing for safer live productions.

Ren Price, who plays Javerbaum's interpretation of God, brought the play to the theater's attention.

"I used to watch parts of this play on YouTube when I was in high school, and I loved it," he said. "I thought it would be a great fit for our season."

"I read the play, and I thought it was funny," he said. "But when (managing artistic director) Jenny Ballard asked me if I wanted to direct the play, I reread the play and said, 'Oh, this is really funny.' I knew it would be a great show."

The story opens when God, who has the first and last word on everything, steps on stage to set the record straight, talking to the audience about things that have happened through the millennia and why.

Meanwhile, Gabriel and Michael assist by feeding him questions they say are from the audience.

"But there comes a point that you start thinking that the questions are really Gabriel's," Thomas said.

Thomas and Major describe the relationship between Michael and Gabriel as siblinglike. They get along, but they have their differences, although those differences don't hamper God's conversation with the audience.

Javerbaum's God talks about how millions of people call upon him every day, how they try to understand what he is saying through his fires, floods and hurricanes. But he also makes it clear that he really is God, the one who speaks through burning bushes and whirlwinds, the one who delivered the original Ten Commandments. And according to Javerbaum, God is tired of those commandments and has decided to redo them.

"He rewrites them to be more specific for people today," Donaldson said.

Donaldson added that the comedy's irreverence makes it inappropriate for children.

"I would say that it's rated 'R,'" he said. "It is definitely for an adult audience."

And speaking of audiences, Ballard added that the theater is taking extra safety precautions for its live productions, including temperature checks, mandatory face masks at all times and socially distanced seating. Only 40 seats will be sold for each performance.

Safety protocols also are in place for the bar and restrooms, which are deep cleaned between every performance using medical grade cleaning products, HEPA filters, and UV lights and wands.

"This is a funny play in a time that we need it most," Ballard said. "So, if you just want to come out, laugh and have a good time, this is the play for you."

At Theatre Baton Rouge, the show goes on for its 75th season — even as a pandemic continues

Theatre Baton Rouge never dreamed it would be celebrating its 75th season amid a pandemic. But, in that time-honored theater tradition, the sh…