Catholic Diocese of Baton Rouge Bishop Michael Duca releases a list of priests who have been credibly accused of sexual abuse of a minor at a news conference Jan. 31. 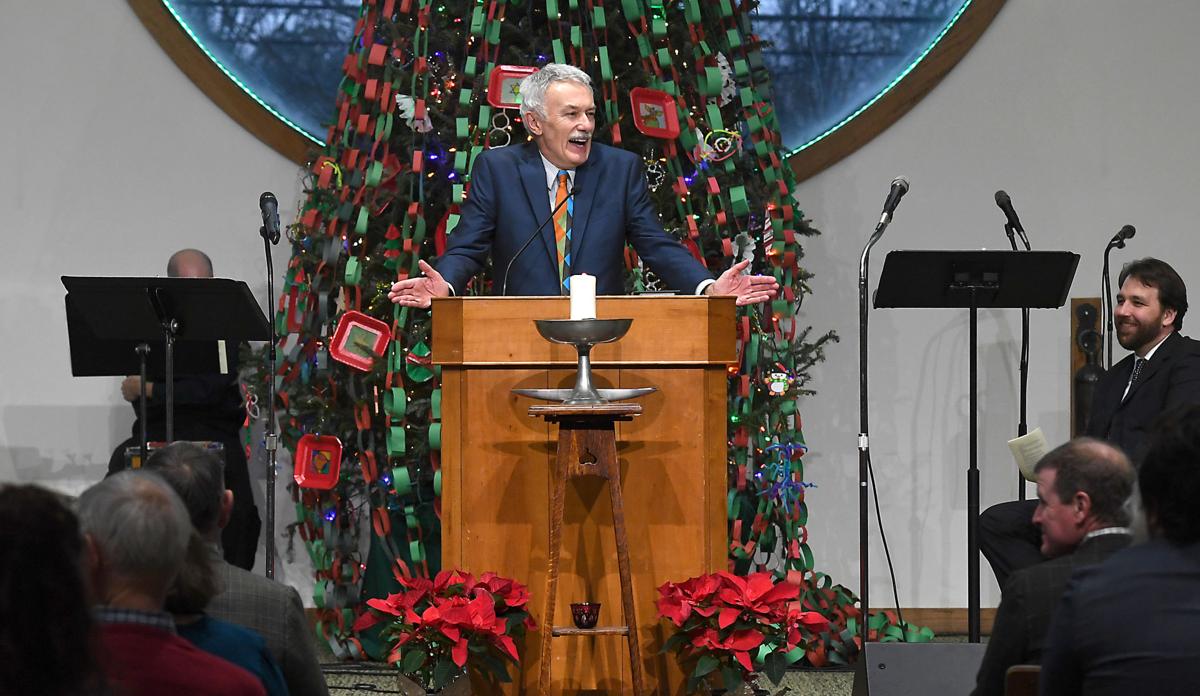 The often controversial Rev. Steve Crump, who retired as pastor of the Unitarian Church of Baton Rouge in 2019, gets a laugh during his final sermon to his congregation on Jan. 6. 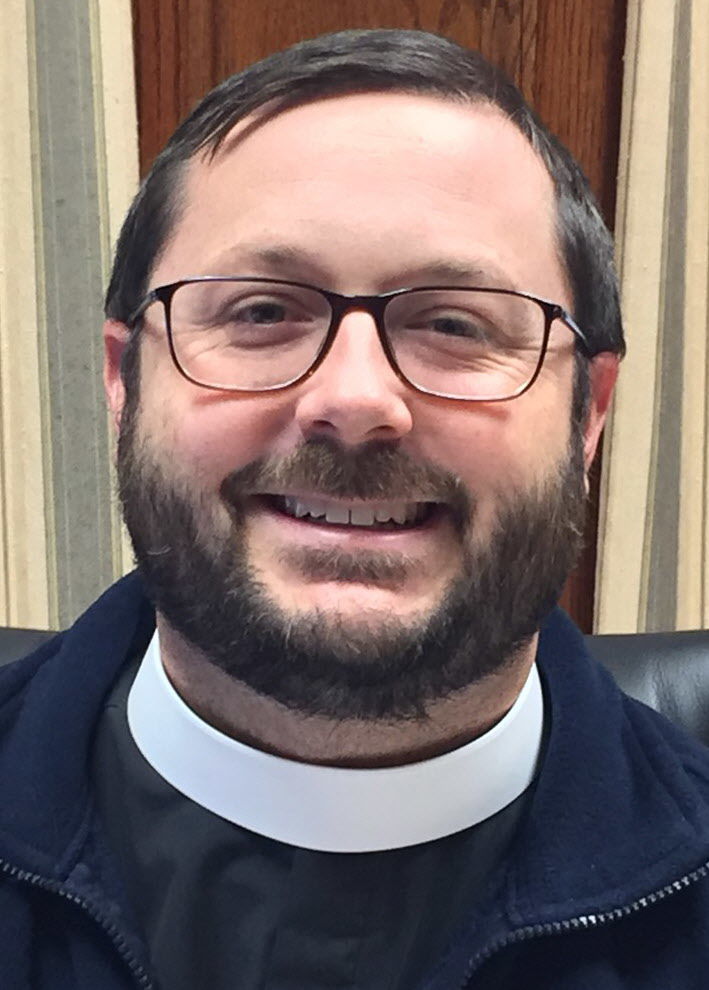 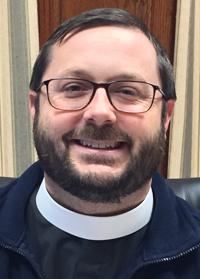 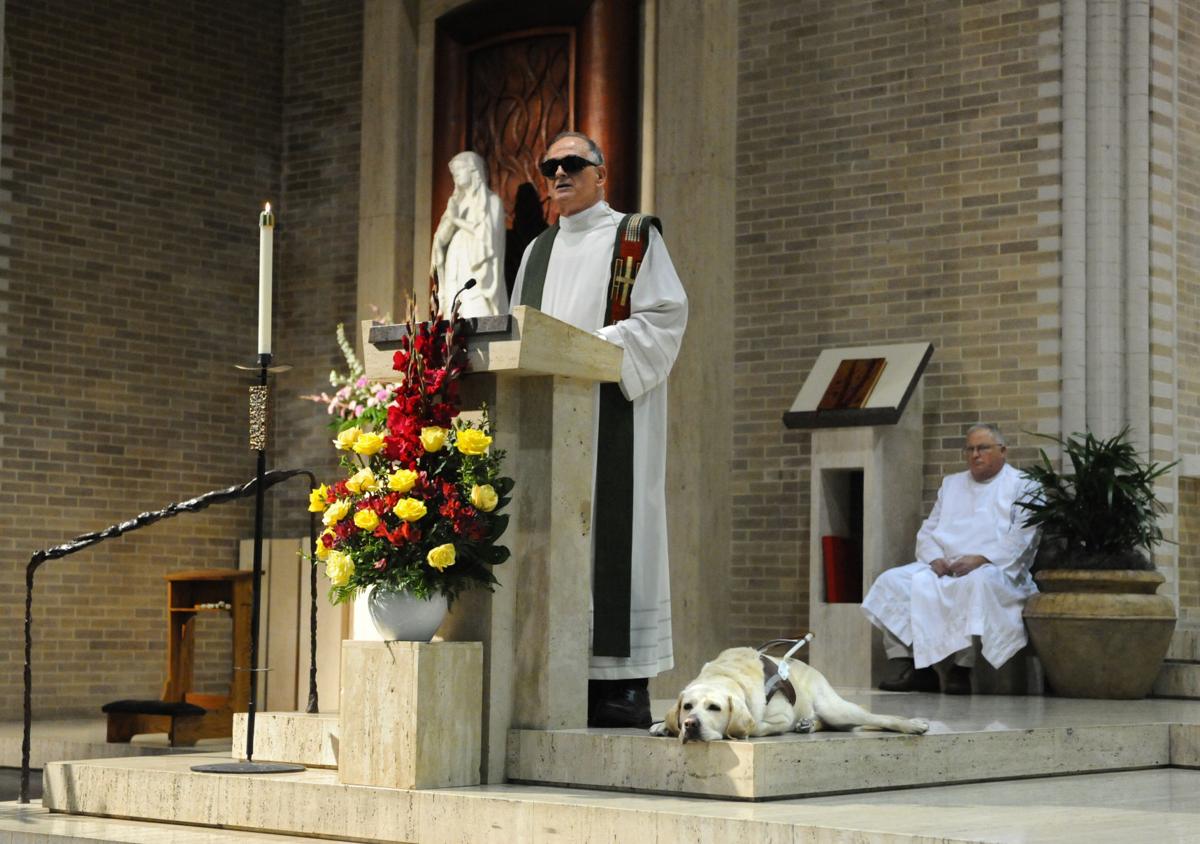 Beloved Catholic priest the Rev. Pat Mascarella, who was blind, died in January at age 77. 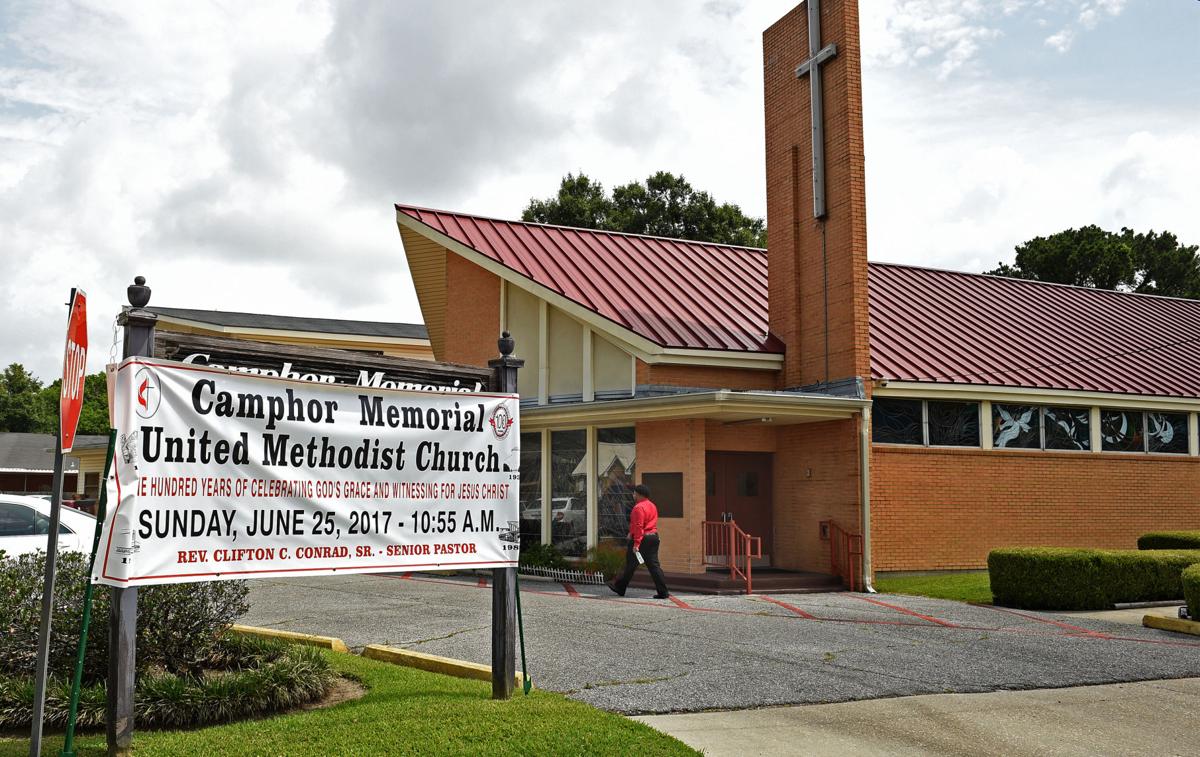 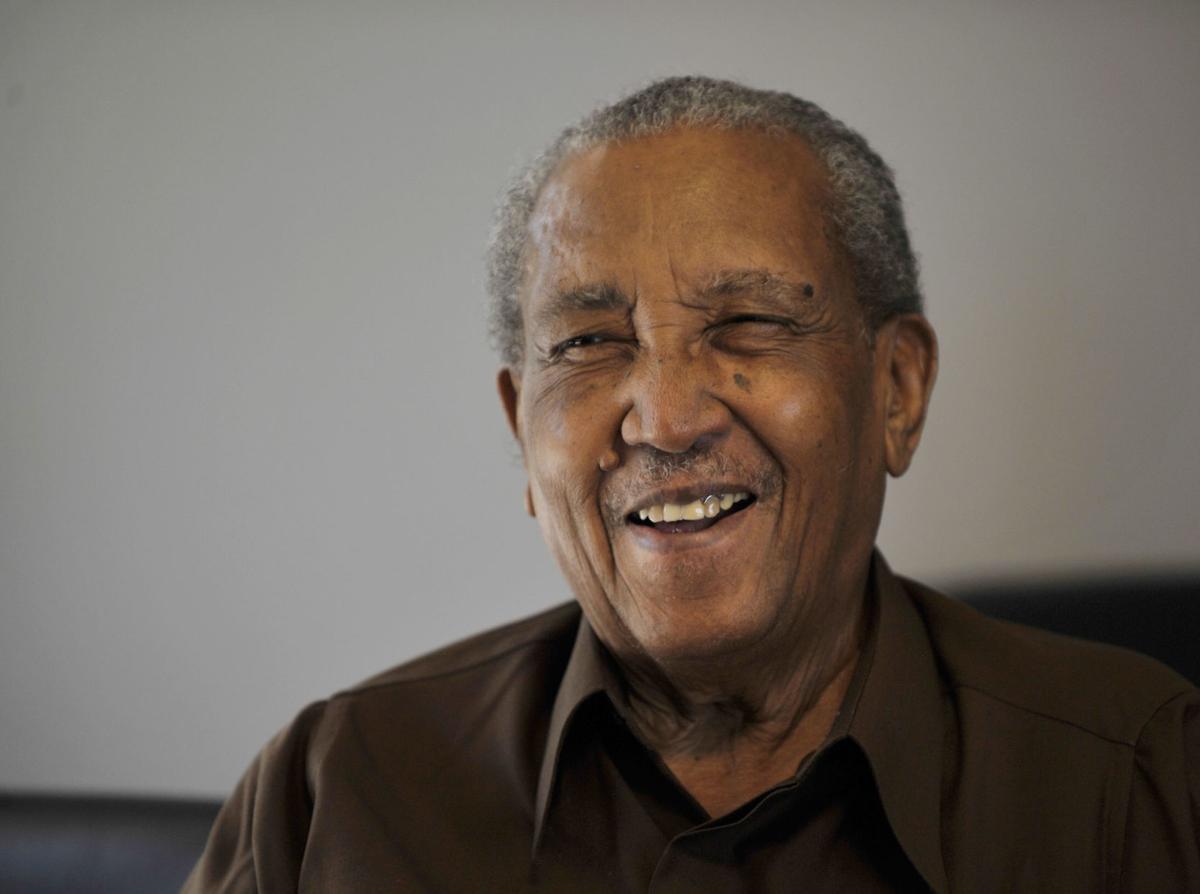 The Rev. Jesse B. Bilberry Jr. retires after 35 years as the pastor of Mount Pilgrim Baptist Church. 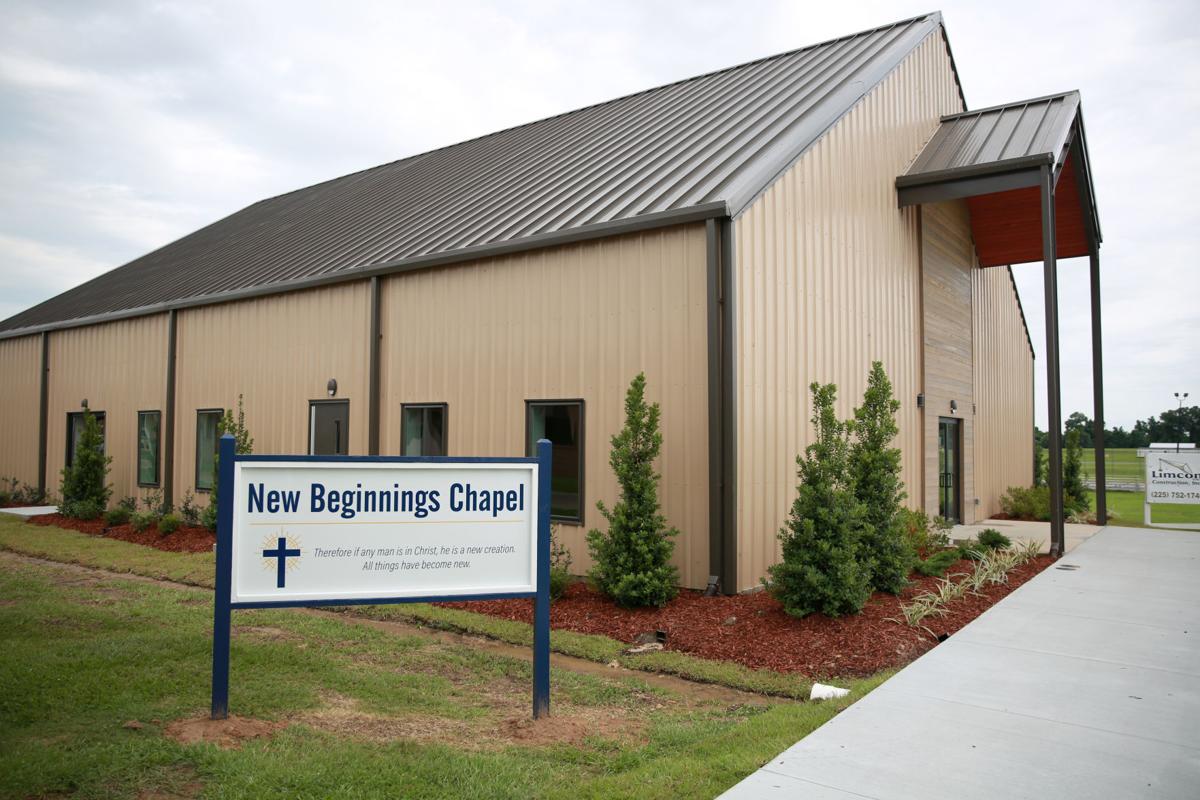 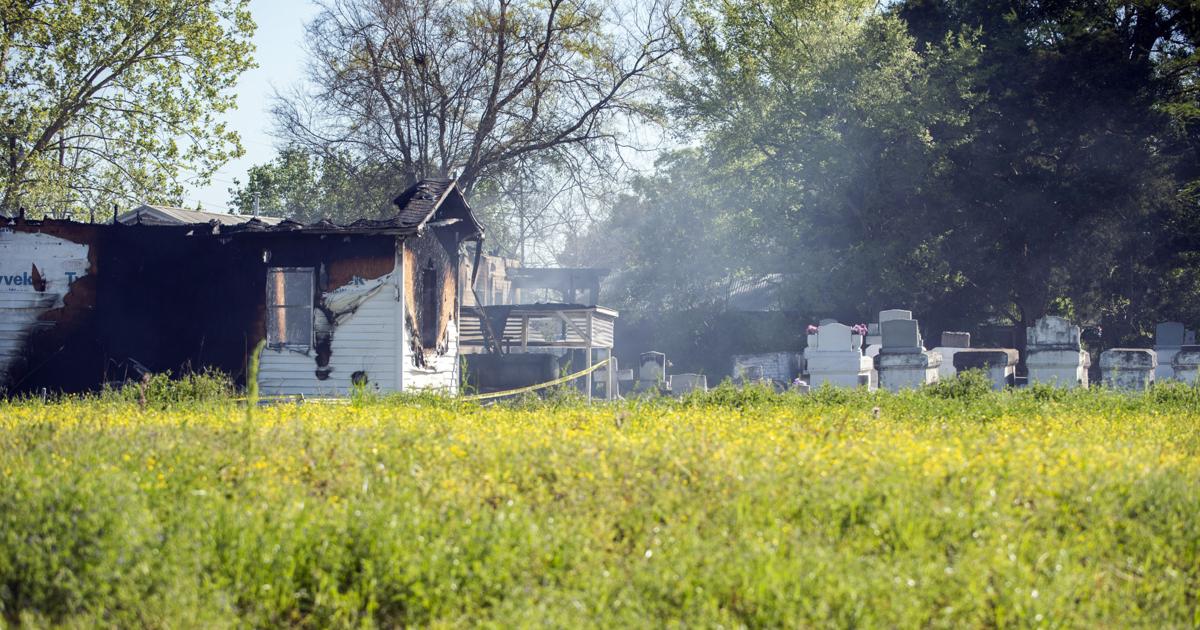 Greater Union Baptist Church was one of three churches in St. Landry Parish destroyed by arson in April. 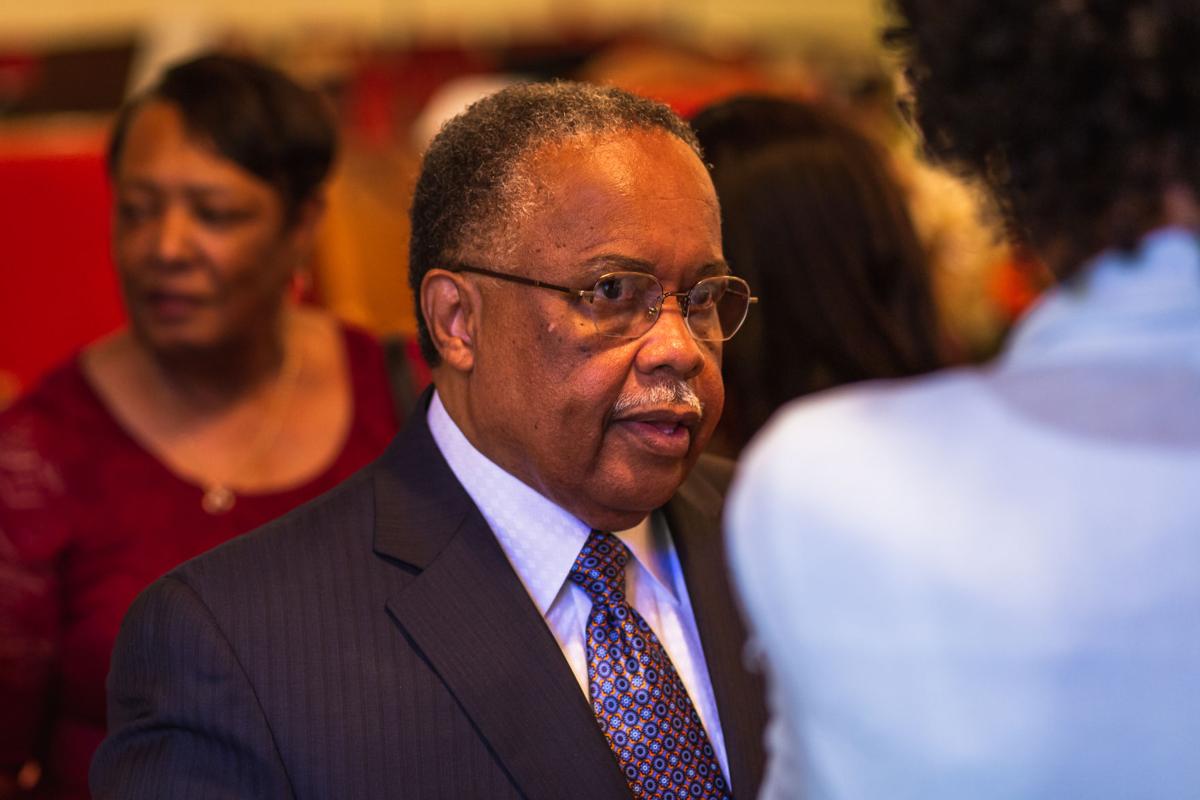 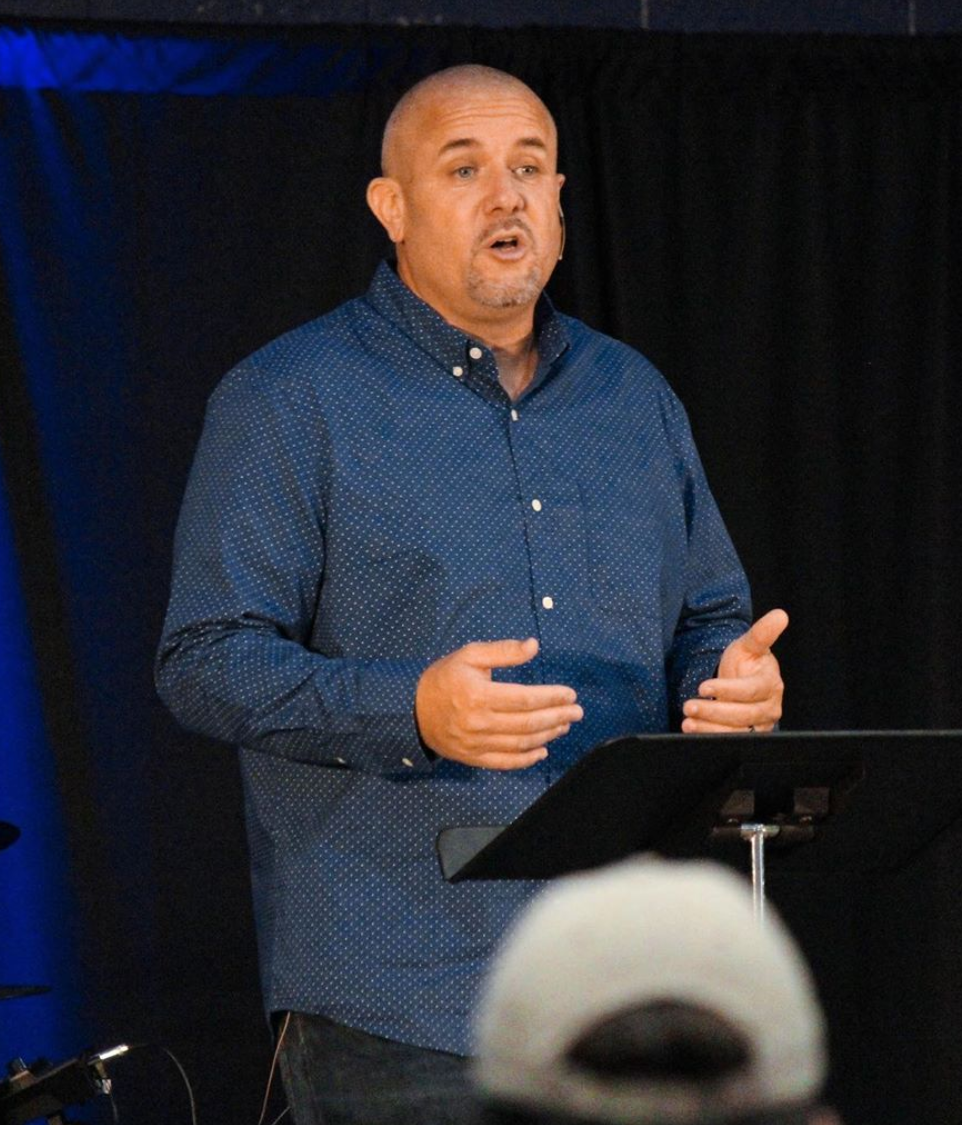 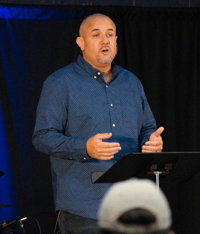 The Chris 'Checkerz' Williams is pastor of Renew Church, which merged this year with Florida Boulevard Baptist Church. 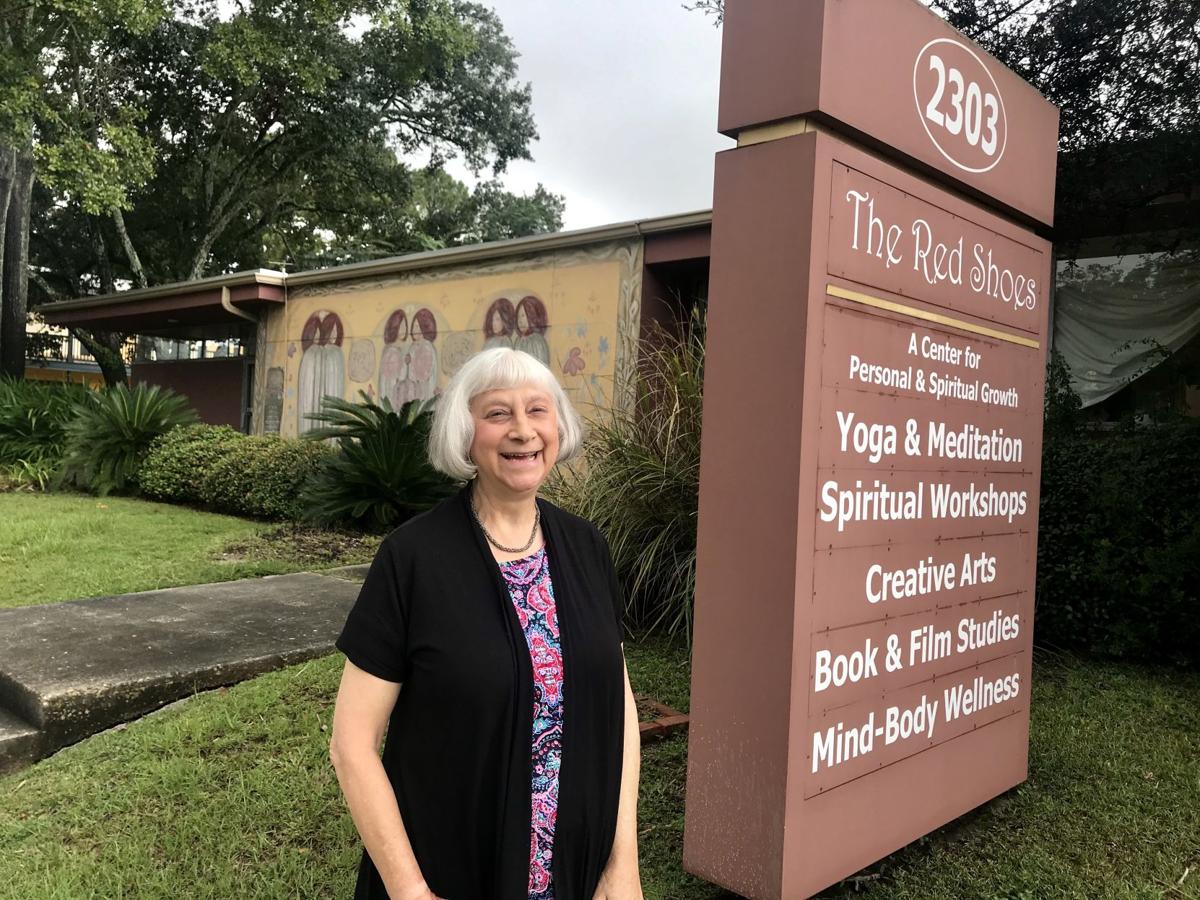 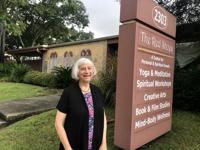 'There are people who say that this is a place that saved their lives,' says Executive Director Wendy Herschman of The Red Shoes, which celebrated its 20th anniversary in November.

Catholic Diocese of Baton Rouge Bishop Michael Duca releases a list of priests who have been credibly accused of sexual abuse of a minor at a news conference Jan. 31.

The often controversial Rev. Steve Crump, who retired as pastor of the Unitarian Church of Baton Rouge in 2019, gets a laugh during his final sermon to his congregation on Jan. 6.

Beloved Catholic priest the Rev. Pat Mascarella, who was blind, died in January at age 77.

The Rev. Jesse B. Bilberry Jr. retires after 35 years as the pastor of Mount Pilgrim Baptist Church.

Greater Union Baptist Church was one of three churches in St. Landry Parish destroyed by arson in April.

The Chris 'Checkerz' Williams is pastor of Renew Church, which merged this year with Florida Boulevard Baptist Church.

'There are people who say that this is a place that saved their lives,' says Executive Director Wendy Herschman of The Red Shoes, which celebrated its 20th anniversary in November.

Topping the news in 2019 for the Baton Rouge-area faith community was the naming of 37 clergy members credibly accused of abusing minors.

Bishop Michael Duca, of the Catholic Diocese of Baton Rouge, released the names during a news conference on Jan. 31, acknowledging and apologizing for the crimes of the clerics. The initial list included 14 diocesan priests, 15 from religious orders, a seminarian and seven priests assigned to the Archdiocese of New Orleans who had served in Baton Rouge.

Duca pledged to publicize any future allegations of abuse in the diocese. The list has since grown to more than 40 priests with potential for more.

The abuse reports go back decades in the 58-year-old Diocese of Baton Rouge, which covers 12 civil parishes. Some of the priests remained in ministry years after allegations against them.

Most of the abuse occurred under the leadership of Bishop Joseph Sullivan in the 1970s and early '80s. Sullivan was also on the list for repulsive behavior.

Some other noteworthy local religion items and events in 2019 included:

CRUMP GETS SEND-OFF: The Rev. Dr. Steve J. Crump stepped down after 36 years as the senior pastor of the Unitarian Church of Baton Rouge.

Crump, 69, preached his final sermon on Jan. 6. The church held a send-off reception for Crump, who took over in 1983 and was the longest-serving pastor in the church's 70 years.

Crump came to Baton Rouge after simultaneously serving two churches in Illinois and Iowa. He grew up in Illinois and graduated from Indiana State University. He received a master's degree from the University of Chicago Divinity School and a doctorate of ministry from Meadville-Lombard Theological School in Chicago.

NEW RECTOR AT ST. JAMES EPISCOPAL: The Rev. Christopher R. Duncan was welcomed as the 24th rector of St. James Episcopal Church during a celebration service on Jan. 16.

MASCARELLA DIES: The Rev. Pat Mascarella, the blind priest who led Masses throughout the Diocese of Baton Rouge even after retiring, died on Jan. 23 at age 77 following complications from heart surgery.

Mascarella, a Baton Rouge native, was known for his kindness and as an advocate for the blind and disabled. He had been visually impaired since childhood and started losing his sight completely about 10 years ago.

Mascarella learned to read Braille and was guided by his canine companion Pace. He went on to earn a master's degree in religious studies from LSU about three years ago, took visual art classes and attended LSU football games.

Mascarella grew up attending St. Aloysius Catholic Church. He studied at St. Joseph Seminary in St. Benedict and Notre Dame Seminary in New Orleans, graduating in 1963. He was ordained a priest on Dec. 17, 1966. Among the churches he served were Christ the King Church and Catholic Center, St. Charles Borromeo and Our Lady of Mercy, all in Baton Rouge; St. Isidore the Farmer Church in Baker; and St. Theresa of Avila in Gonzales.

The 102-year church at 8742 Scenic Highway marked the occasion with a dedication ceremony on Feb. 24.

BILBERRY BIDS BYE: The Rev. Jesse B. Bilberry retired in March after 35 years as the pastor of Mount Pilgrim Baptist Church in Baton Rouge.

Bilberry, 90, preached his final message as pastor on March 31.

Bilberry is a native of Marion in north Louisiana. He was an educator at Southern University and associate minister at Mount Pilgrim when he was elected as the church's pastor on Jan. 16, 1984.

The Rev. Ronnie O. Blake was elected to replace Bilberry.

On April 10, Bilberry was honored in an event hosted by U.S. Rep. Cedric Richmond on Capitol Hill in Washington, D.C. Bilberry also offered the opening prayer for the U.S. House of Representatives.

ONE BLOOD REVIVAL: Speakers, musicians, mimes, choirs and worship teams from around the country and the world took part in the One Blood Revival event on April 12-13 at Memorial Stadium in Baton Rouge.

The purpose of the free event was to help bring healing and restoration to Baton Rouge, O'Neal said.

PLACE TO WORSHIP: Behind the efforts of Louisiana first lady Donna Edwards, the New Beginnings Chapel was dedicated on May 19 at the Louisiana State Police Barracks in Zachary.

The 4,815-square-foot chapel was championed by Edwards to serve the spiritual needs of inmates. The facility can accommodate about 140 inmates.

Supporters raised more than $200,000 through the nonprofit Prison Chapels of Louisiana to complete the chapel. Furniture, a sound system and musical instruments were donated.

POLICE OFFICER AND PASTOR: The Rev. Derrick Williams, a sergeant in the Baton Rouge Police Department, was installed on June 2 as the new pastor of New Pilgrim Baptist Church in Zachary.

Williams has been in law enforcement for nearly 25 years and in ministry for 16 years. He previously served 12 years as the pastor of Liberty Missionary Baptist Church in Liberty, Mississippi.

The Rev. Robin McCullough-Bade, executive director, was among members of the Federation to tour the three churches — St. Mary, Greater Union and Mount Pleasant Baptist churches in St. Landry Parish — during Holy Week. "No words to describe what we saw," she told the crowd of about 300 people at the Catholic Life Center.

A suspect has been arrested in the case.

The celebration events included preservice worship on Sept. 11, a gala on Sept. 13 and the anniversary service on Sept. 15.

The Rev. W. Marshall Myles has been the pastor at the church since 1982. He is one of only four pastors. Others were the Revs. Octave Mitchell, E. Doyle Billoups and Leo Billoups.

The Florida Boulevard members voted by "overwhelming majority" on Oct. 13 to turn over its property, day care center and all other assets at 10915 Florida Blvd. to Renew Church, said Renew Pastor Chris "Checkerz" Williams.

Renew had been holding services at a gym on campus since June 2018. Williams launched Renew Church in March 2018.

MICHAEL W. SMITH AND FRIENDS: Among the big names in Christian music to hit the Baton Rouge area this year was Michael W. Smith, winner of both Grammy and Dove awards.

Smith brought his "35 Years of Friends" tour to Greenwell Springs Baptist Church on Oct. 17. The tour's name is from the song "Friends" from Smith's first album in 1983 titled "The Michael W. Smith Project."

Smith's hits include "Agnus Dei," "Surrounded," "Open the Eyes of My Heart," Draw Me Close" and "Here I Am to Worship."

20 YEARS OF RED SHOES: The Red Shoes spirituality center celebrated its 20-year anniversary on Nov. 1-3 with an open house and a weekend of special programs, classes and other festivities at the center, 2302 Government St.

The nonprofit center was founded by Roberta Guillory in 1999 to help women improve their lives through spiritual and creative development through book and film studies, weekend retreats, workshops and more.

Wendy Herschman, executive director since 2007, said the center gets its name from Clarissa Pinkola Estes' 2003 book "Women Who Run with the Wolves: Myths and Stories of the Wild Woman Archetype." Estes cites the story of an orphan girl who creates her own pair of red shoes from scraps of material.

The red shoes symbolize "the journey one takes toward becoming one’s true authentic self."

"We give up who we really are to fit into somebody else's version of who we should be," Herschman said.

Men are also welcome at the center, which began on Perkins Road and moved to Government Street in 2003.

Be encouraged. God's got this. And that. And those kids. And those bills. And that job. And that sickness. It's easy to say don't worry, don't stress, don't be anxious, don't sweat it. But we are human and God knows doubts will come. His word assures us that he's mindful of our situations and he'll never leave us.

If God has concerns for the smallest of things and in the details, don't you think he's concerned about your fears, doubts, health and well-being?

Remember these words of Jesus in Luke 12:22-26: “Do not worry about your life, what you will eat; or about your body, what you will wear. Life is more than food, and the body more than clothes. Consider the ravens: They do not sow or reap, they have no storeroom or barn; yet God feeds them. And how much more valuable you are than birds! Who of you by worrying can add a single hour to his life? Since you cannot do this very little thing, why do you worry about the rest?”

Ah, THE REST. You do what you have to do. You keep on getting up, working, lifting up the name of Jesus, keeping the faith — and watch God do the rest. Not only will he give you rest, he'll do the rest — take care of the balance, complete the healing process and turn crying into dancing.

The Red Shoes turns 20. 'There are people who say that this is a place that saved their lives,' says executive director

Twenty years ago, a group of women gathered in Roberta Guillory's living room for a book study.