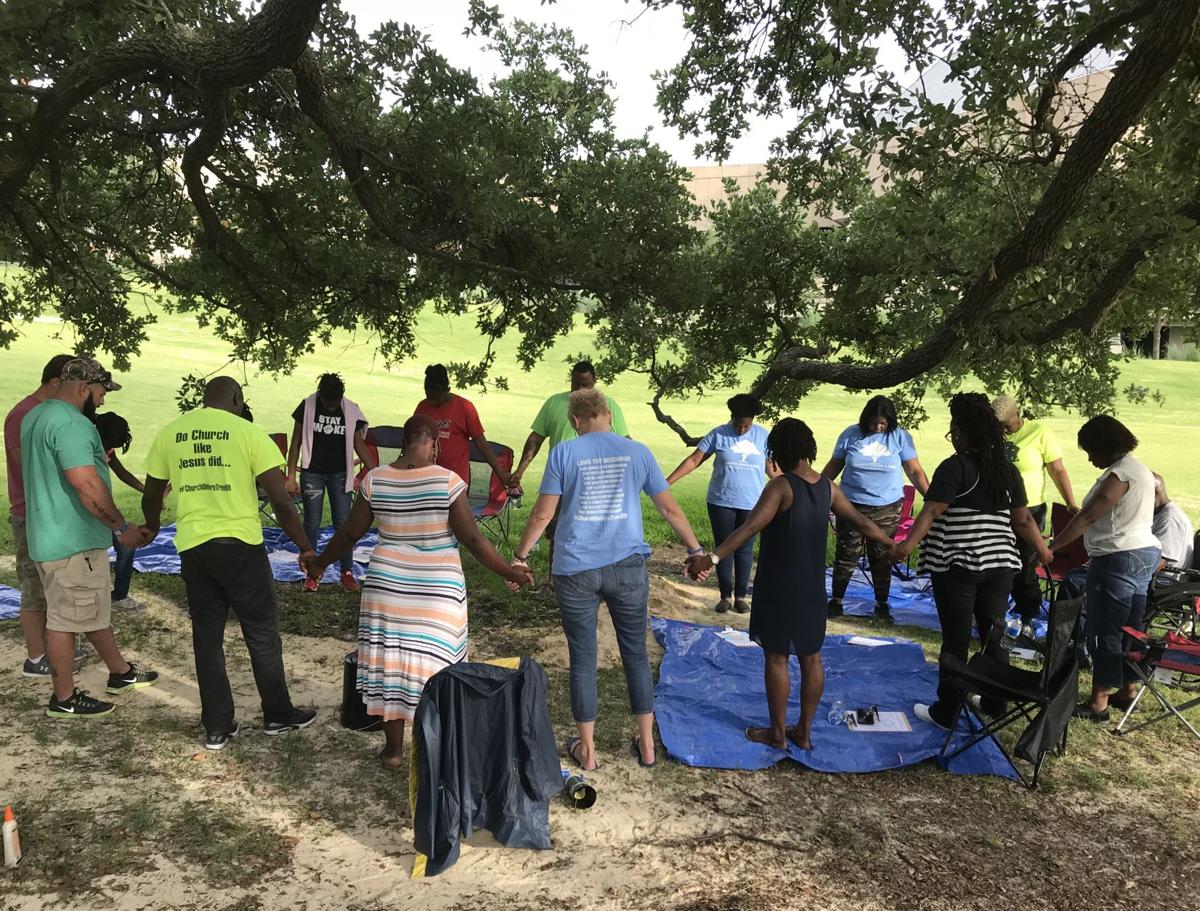 Congregants gather to pray at Church Under a Tree at Repentance Park in downtown Baton Rouge. 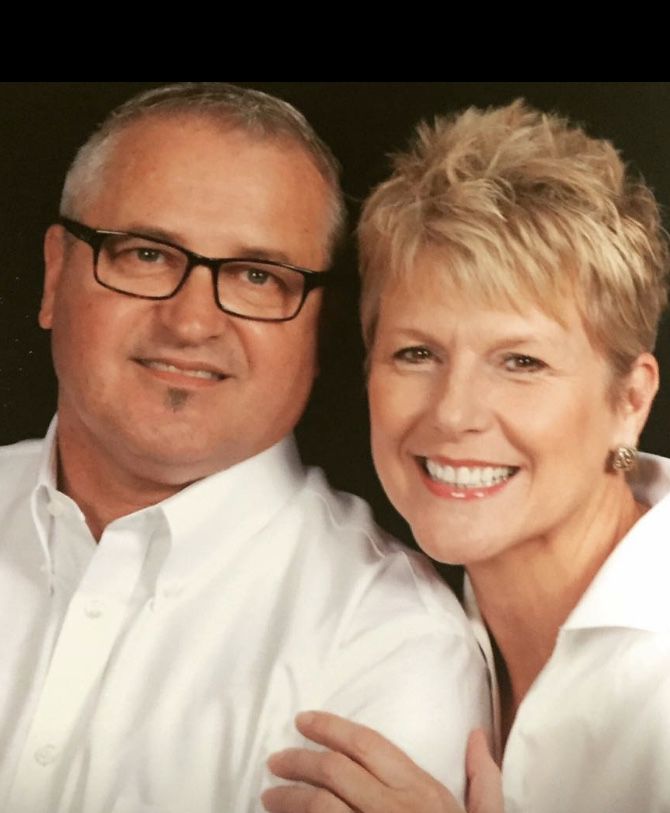 Ed and Julie Doyle, of Church Under a Tree 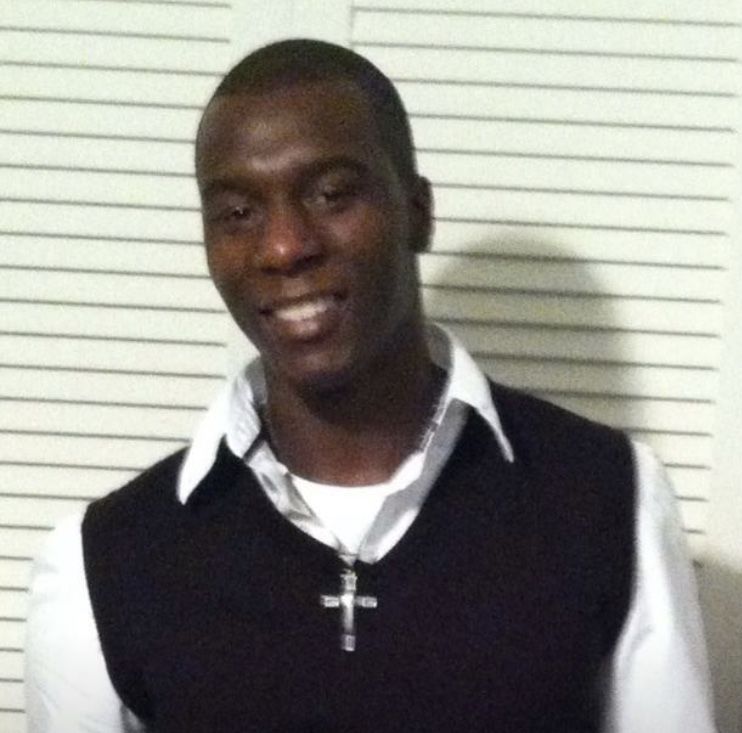 Clovis Williams, one of the leaders of Church Under a Tree 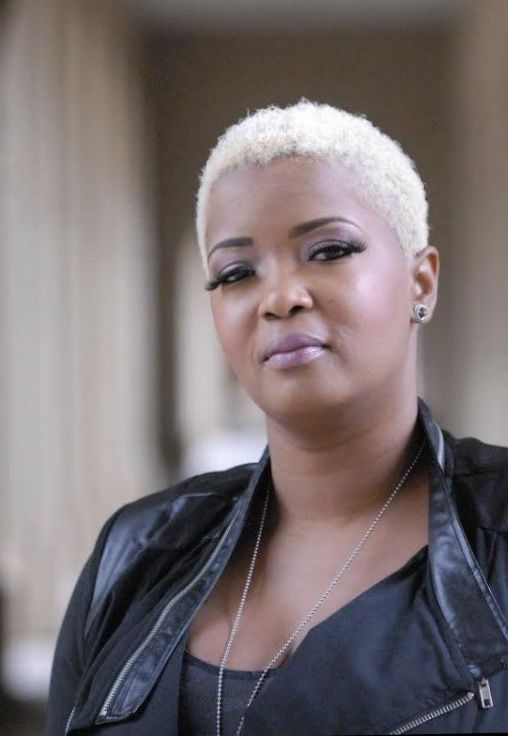 Erika LeSha, one of the leaders of Church Under a Tree 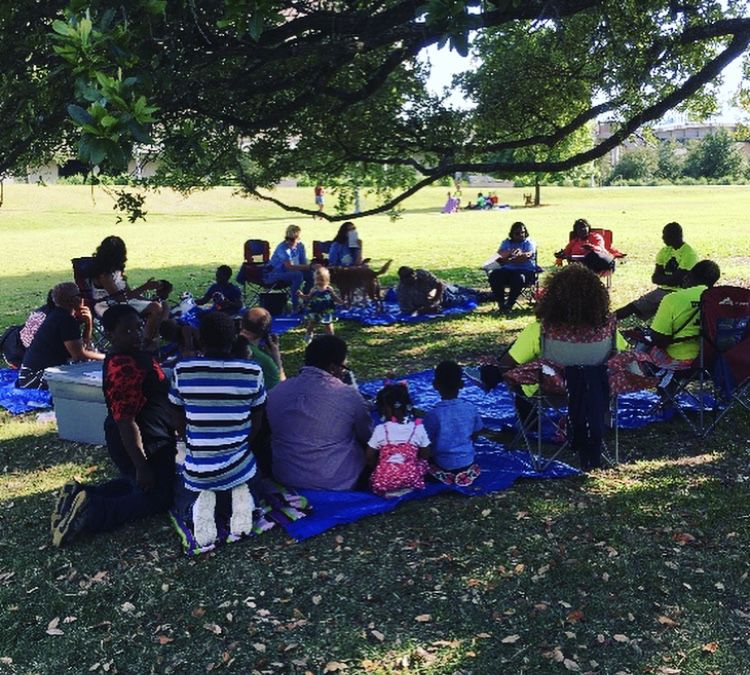 The Church Under a Tree holds services under an oak at Repentance Park in downtown Baton Rouge. 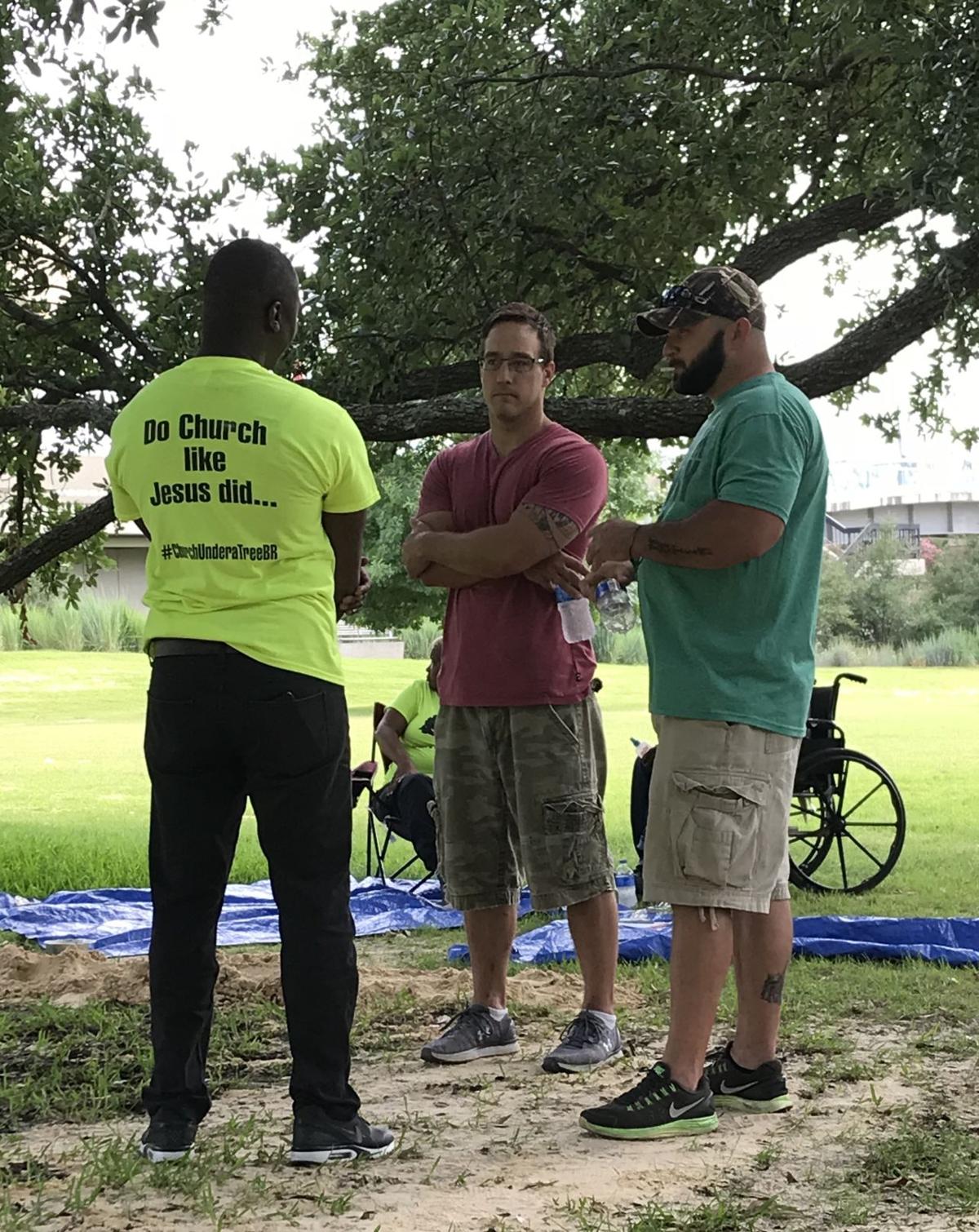 Clovis Williams, Craig Fuller and Gabe Delome, from left, talk at Church Under a Tree at Repentance Park in Baton Rouge. 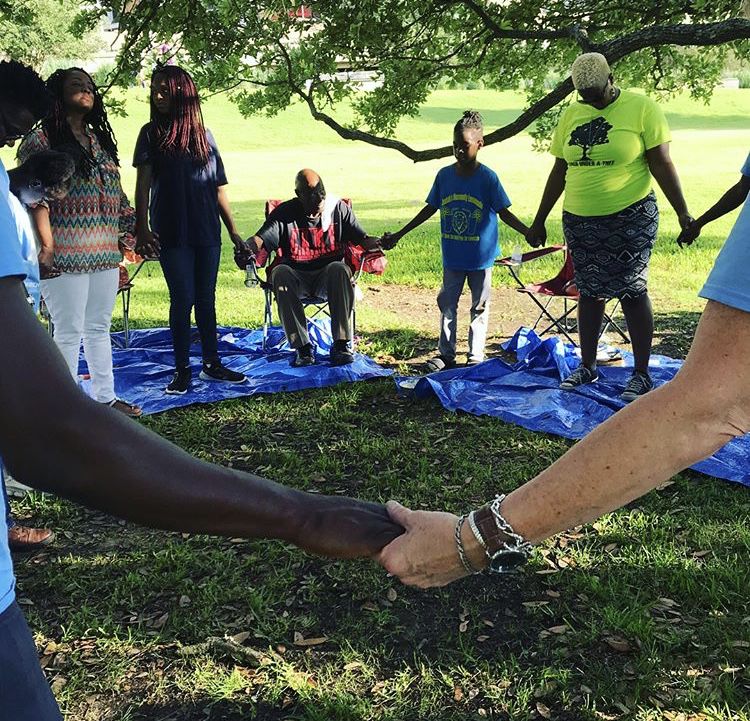 Joining hands, those attending services at Church Under a Tree say a prayer. 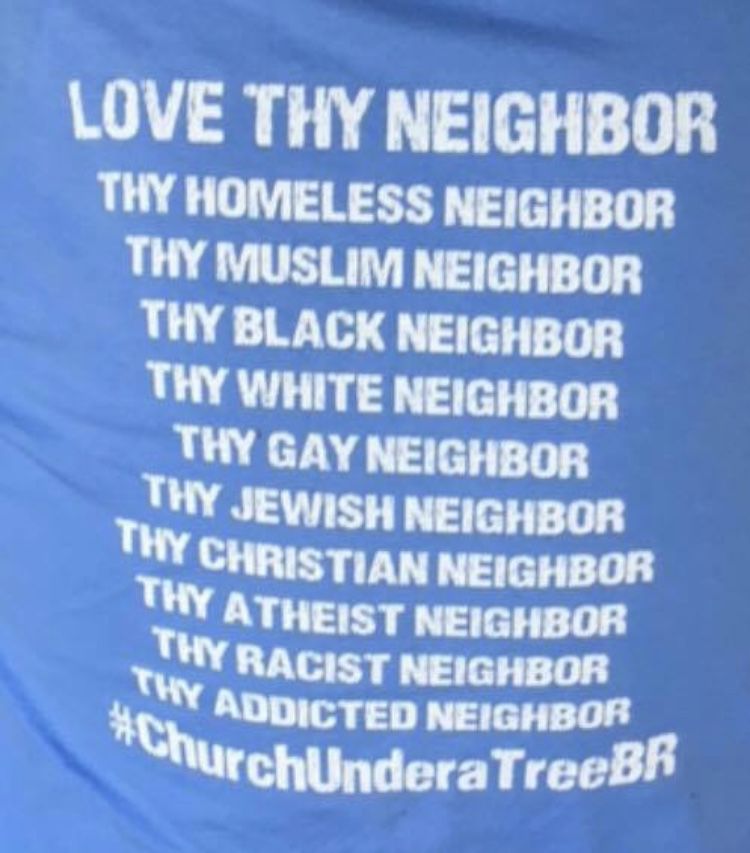 A T-shirt for Church Under a Tree spells out its motto.

Congregants gather to pray at Church Under a Tree at Repentance Park in downtown Baton Rouge.

Ed and Julie Doyle, of Church Under a Tree

Clovis Williams, one of the leaders of Church Under a Tree

Erika LeSha, one of the leaders of Church Under a Tree

The Church Under a Tree holds services under an oak at Repentance Park in downtown Baton Rouge.

Clovis Williams, Craig Fuller and Gabe Delome, from left, talk at Church Under a Tree at Repentance Park in Baton Rouge.

Joining hands, those attending services at Church Under a Tree say a prayer.

A T-shirt for Church Under a Tree spells out its motto.

Imagine a church with no pews, no piano, no sermon, no offering. In fact, no walls or roof.

Imagine a church outside on the streets, ministering like Jesus did to the lost, the needy, the hurting, the homeless and the downtrodden.

That is the concept behind Church Under a Tree, which meets at 5 p.m. every Sunday under an oak tree at Repentance Park, between the Raising Cane's River Center and the Old State Capitol.

"Imagine Jesus sitting under a tree surrounded by a small circle of seekers sharing the gospel of grace and unconditional love and mercy and redemption," said Doyle, one of the four leaders of the Church Under a Tree. "Church buildings and church people have a beautiful and valuable place in God's kingdom. But we are called to serve God in a very different way. That's what Church Under a Tree is called to do: to do church like Jesus did."

Doyle, 59, started Church Under a Tree about two months ago after serving in various ministries at Star Hill Church. He alternates teaching Sundays with his wife, Julie, and also Erika LeSha and Clovis Williams, both of whom attend Star Hill. Williams also is part of Grace and Truth Church in Scotlandville.

"We have very different spiritual giftings and very different teaching styles," Doyle said. "We think it's a huge honor and privilege to meet those people under a tree."

Doyle said his special call to outreach was based on Luke 15:1, where Jesus shares the parable of a shepherd who left 99 sheep to find one that was lost.

"Julie and I have been in organized church our entire life. This is our first street ministry. While the church serves the 99, we serve the one," he said. "Our prayer is that, as we continue to leave the 99 and seek the one, God will bring one person under the tree each week that needs Jesus."

The Church Under a Tree gatherings last about an hour. Doyle said there is a core group of about seven people who show up regularly, but as many as 50 people have attended.

"It is quite unique," Doyle said. "We take a circle full of prayer requests. We hold hands, and we pray and we go home."

For Doyle and some of his volunteers, that doesn't always mean going directly home. Quite frequently after church, there are detours to help a homeless person find a place to stay or maybe help someone move furniture.

"We're very much like the first-century church. If someone has a need, we're all about filling that need," he said.

Doyle, a Missouri native, said he's established relationships with several organizations since moving to Baton Rouge five years ago, and those connections have been valuable in helping those in need.

"Everything that has been donated, we turn right back around and give it to the people under the tree," he said. "God has built relationships where we are now able to plug people's needs."

Doyle said Church Under a Tree has built partnerships with churches such as Star Hill, Love Alive, Purpose, Elevation and First Presbyterian.

"Part of our model is we're not necessarily resourced to do things that great big churches are doing," he said.

But in its own way, Church Under a Tree is reaching people, such as a lesbian couple who was ostracized from their church. Or the homeless Muslim man, a drug addict who caught the last half of a recent service and prayed with Christians for the first time in his life. He was provided with a hot meal and hotel stay.

Or James, a 54-year-old black man, who's literally spent half of his life in jail. He was released in April after serving a 12-year prison term for second-degree battery.

"Through the resources and the relationships that God has blessed us with, James has a place to live and a driver's license and a job and a car," Doyle said. "That's not the outcome for most black men who have served prison sentences in Baton Rouge."

Doyle can identify with the addicted neighbor. He grew up in church, got saved at 12 years old but later started "dancing with demons."

"You name it and I rolled it, smoked it or rubbed it into my belly or shot it into my veins or snorted it," he said.

That battle with drugs and other vices lasted until age 29; Doyle has been sober for 30 years.

"My testimony is not a straight path at all," he said.

The former addict is humbled God has called him to such a task.

"I'm blown away that God lets me do this," he said. "I have the privilege of doing this, but I also know that we're not playing church anymore. This is the real deal."

Doyle's plan is to stay in the streets.

"We will never be a building," he said. "Jesus did not have brick and mortar, so it is our role to minister to people."

For Doyle, that means every Sunday no matter the weather.

"If there's a hurricane, you will find me at five o'clock under that tree," he said.

Another day, another blessing

It’s a sad commentary when we look at our world today and see everything’s always about Democrats versus Republicans; liberals versus conservatives; black people versus white people; rich versus poor; nation versus immigrants. How about we try to live by the standards of righteousness (right) that God has laid out for us instead of the evil ways (wrong) of the enemy?

As believers and followers of God, sometimes we’re going to side with Republicans or Democrats, black people or white people, etc., when they stand for the things of God and show the love of God.

In last week's sermon titled "By This," my pastor preached about love. He shared John 13:35-34, where Jesus said, “A new command I give you: Love one another. As I have loved you, so you must love one another. By this everyone will know that you are my disciples, if you love one another.”

Jesus said people should and will know if we are his disciples by the way we love and the way we live by that love. Not by the way we take sides and show our hate and ignorance over political, racial, social and economic issues. Stop siding with people simply because you share the same party, skin color or neighborhood.

Side with people who love God and are willing to pray with you, minister to and with you and encourage you in Christ. When we put our love for Christ above our politics, our feeble thinking, our economic status and even our race, then our lives will be an example of the life that he lived.

Faith Matters runs every other Saturday in The Advocate. Reach Terry Robinson at (225) 388-0238 or trobinson@theadvocate.com.