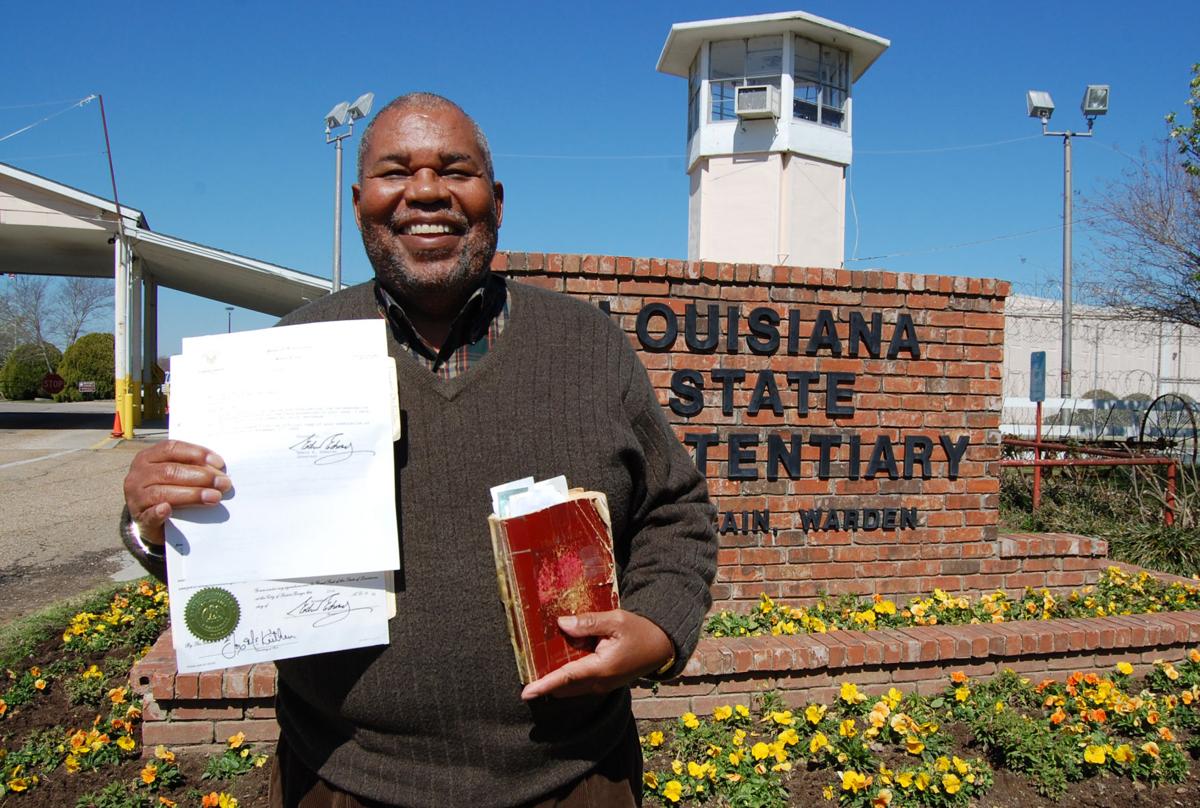 Checo W. Yancy holds his well-worn Bible in one hand and a letter and certificate of commutation of his life sentence signed by former Gov. Edwin W. Edwards. Yancy spent 20 years in Angola and now regularly visits the men inside as a peer mentor and Christian counselor. Yancy is one of the plaintiffs challenging a longstanding Louisiana law prohibiting felons, even those on probation and parole, from voting. 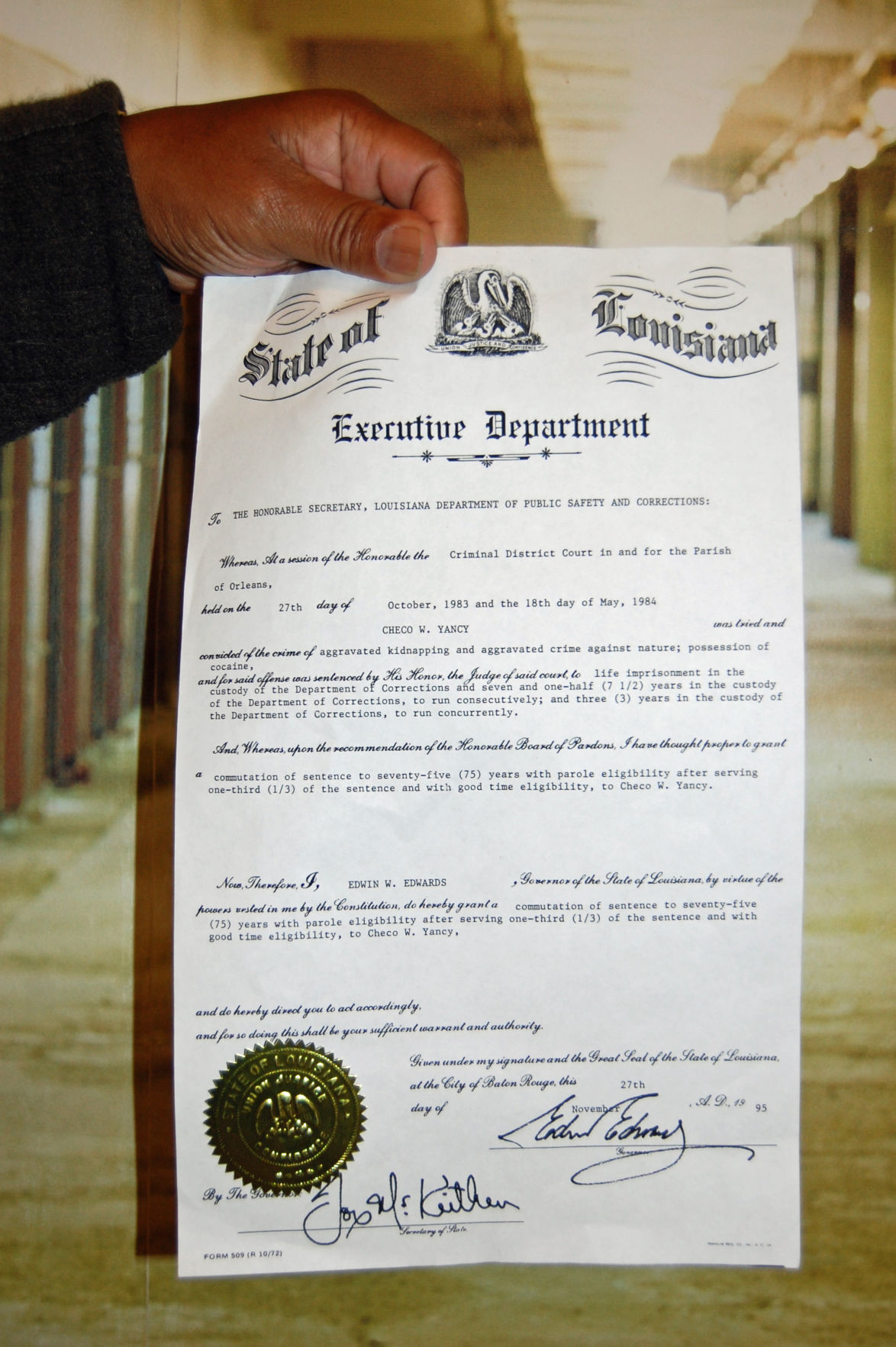 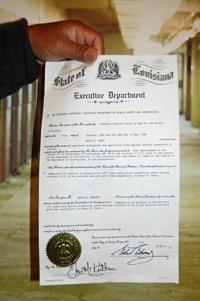 Checo W. Yancy holds his certifcate of commutation of his life sentence, signed by former Gov. Edwin W. Edwards, on Nov. 27, 1995. Yancy still had to serve 8 more years before he was was released in 2003, serving a total of 20 years at Angola.

Checo W. Yancy holds his well-worn Bible in one hand and a letter and certificate of commutation of his life sentence signed by former Gov. Edwin W. Edwards. Yancy spent 20 years in Angola and now regularly visits the men inside as a peer mentor and Christian counselor. Yancy is one of the plaintiffs challenging a longstanding Louisiana law prohibiting felons, even those on probation and parole, from voting.

Checo W. Yancy holds his certifcate of commutation of his life sentence, signed by former Gov. Edwin W. Edwards, on Nov. 27, 1995. Yancy still had to serve 8 more years before he was was released in 2003, serving a total of 20 years at Angola.

The first time Checo W. Yancy entered the Louisiana State Penitentiary at Angola, he was a shackled and handcuffed young man facing a life sentence in 1984 for felony crimes he committed in New Orleans.

But with his sentence eventually commuted, Yancy, 67, re-enters the prison as a free man ministering to the spiritual needs of some of the 6,200 men still in there.

Though technically his 2003 release came from having his sentence shortened, not his crimes pardoned, Yancy gives God the glory for, what he calls, being “twice pardoned,” noting decisions by men freed him from prison, while the work of Jesus at Easter freed him from sin.

“God says, ‘You are forgiven of your sins, and I will remember them no more. Go and do right,’ ” Yancy said. “Man’s pardon says, ‘Yeah, we commute your sentence, but we’re not gonna forget.’ ”

According to a commutation of sentence certificate signed by Gov. Edwin W. Edwards on Nov. 27, 1995, Yancy was convicted in 1984 and sentenced to life imprisonment for aggravated kidnapping, aggravated crime against nature and possession of cocaine.

The commutation, approved by the state Pardon Board, changed his life sentence to 75 years. Yancy served another eight years, for a total of 20 years, before he was released by the Board of Parole.

He must regularly meet with a parole officer and is a registered sex offender.

“I committed a crime I was responsible for. I created a victim. I hurt somebody. I should not have done that, and I’m very sorry for it,” he said. “I pray for my victim every day.”

Yancy grew up an only child in St. Louis, where his parents owned and operated a neighborhood restaurant and his father also worked as a tailor.

“I knew of Jesus as a little boy, but I only knew of him,” Yancy said, noting his family regularly attended a small Baptist church, and he was baptized as a teenager.

“I always knew of right and wrong, but as I got older, I got involved with the wrong people, got involved in drugs and strayed away,” he said.

After graduating from high school in 1962, he joined the U.S. Air Force. He served as a clerk, was honorably discharged in 1965 and got a job as a steelworker in Florida.

But then he moved to New Orleans where Air Force buddies had told him the party never stops.

Before he was arrested, he was successful. A father and husband whose second wife would stick with him even through his prison term, he owned a restaurant and rental properties, had a good job working at a court clerk’s office, and kept on partying.

One night, misrepresenting himself, he lured a 17-year-old girl into his car.

“I’d been riding around the French Quarter looking for sex and I had drugs in my car — cocaine — and got arrested,” he said.

“People will say, ‘Everybody has that when you get in trouble and that’s the first thing you call on: jailhouse religion,’” Yancy said, but that is when “I really had that life-changing — born-again— experience.”

“After I got out on bond, I actually got on my knees and started praying,” Yancy said. “I went back to church. I rededicated my life to the Lord. In fact, I got baptized again and things were going pretty good and I started to believe, ‘God, you really got this,’ but that’s not the way God is.

“I still had consequences for my sins. I went to trial, I was found guilty and was given a mandatory life sentence,” he said. “God can come into your life and he can help you, but that doesn’t mean he will instantaneously deliver you. I spent 20 years at Angola — 7,309 days.”

While he was in prison he diligently worked, stayed positive and became a model prisoner.

After working in the fields his first 90 days, an introduction to Angola required of all new offenders, Yancy got an office typing job where Merriet Thomas was a classification officer. They worked together 18 years and remain good friends. Thomas is now a tour guide for the Angola Museum.

Yancy is “a mentor for a lot of the guys who have discharged from here,” Thomas said. “You couldn’t find a better person.”

Angola is a city in itself, what officials call a “gated community,” and as such, offenders all must have jobs and can get involved in many civic and faith-based organizations.

Yancy joined the Human Relations Club, taught classes for the United States Jaycee’s Club — “I taught one man to read by using the comics,” he said — and was president of the Lifer’s Club until his sentence was commuted.

He participated in Kairos, an interdenominational prison program, and now serves that ministry at Angola and also at other area prisons.

When Burl Cain became the warden in 1995, dying men were rolled into an empty room to die alone and often in pain.

“Warden Cain wanted them to be able to die with dignity,” Yancy said.

The prison began a hospice program, and Yancy was one of the first volunteers.

“It’s a humbling experience to wash a man who is just skin and bones, turn him over, hold his hand while he dies,” Yancy said. “I’ve seen killers, rapists, armed robbers terrified. All you can do is pray for them.”

He also volunteered at The Ranch House, a clubhouse of sorts where Cain entertains visitors. That’s where the Rev. Mark Lubbock, a Methodist pastor and executive director of Gulf South Men, a Christian men’s ministry, met Yancy at a luncheon for former Watergate felon turned prison minister Chuck Colson.

“Checo was busy serving everybody with a big smile,” Lubbock said. “When Checo was released on parole, we participated in men’s Bible studies together and served alongside in numerous prison ministries and men’s ministries.

“I count Checo as one of my closest and dearest friends,” Lubbock said.

Yancy is a member of Gulf South Men and regularly attends the noon Wednesday Businessmen’s lunch where several hundred men from all denominations meet at Bethany World Prayer Center, south campus. He’s in a small local group of Promise Keepers and is involved with O’Brien House addiction recovery programs.

“Checo Yancy, post years of incarceration, leads a life that exemplifies serving others,” Fontenot said. “He cares about ending the cycle of violence in our communities and works diligently to find successful re-entry efforts.”

Yancy is president of Louisiana CURE, a local chapter of the national Citizens United for Rehabilitation of Errants, that advocates for criminal justice reform in state legislatures.

He also directs the Mentoring Program for Capital Area Reentry Coalition, where James Windom, is the executive director.

Yancy, Windom said, “is driven by a relationship with God that many of us talk about but rarely live up to.”

A few years before his release, Yancy got involved in a prison ministry of Grace and Compassion Church of Baton Rouge, where he now attends. Benjamin C. Ross, Sr., accepted Yancy’s request to become his mentor.

Taking responsiblity for his actions was key to Yancy gaining his freedom from the state and spiritual freedom from God, said the Rev. Chester Self, pastor of the 125-member Grace and Compassion Church, noting, “people need to know that he has fully accepted responsibility for his actions and that is the beginning of being pardoned by God, because you have to admit you are a sinner.”

Yancy said he wants his story to show the public that people can change, especially when they have a life-changing relationship with Jesus Christ.

“I don’t ever want to be remembered for the worst thing that I’ve done,” Yancy said. “If I die tomorrow, I’d want somebody to be able to say, ‘Yeah, he did do that, but he was trying to help other folks. He was a felon, but he was twice pardoned, and he showed it.’ ”

A lawsuit seeking to restore voting rights to nearly 70,000 Louisianians on probation or parole for felony crimes will go forward against the …