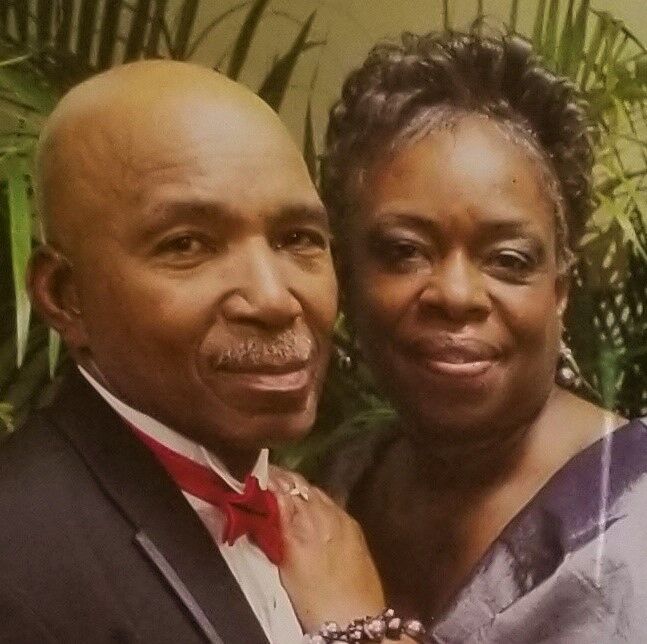 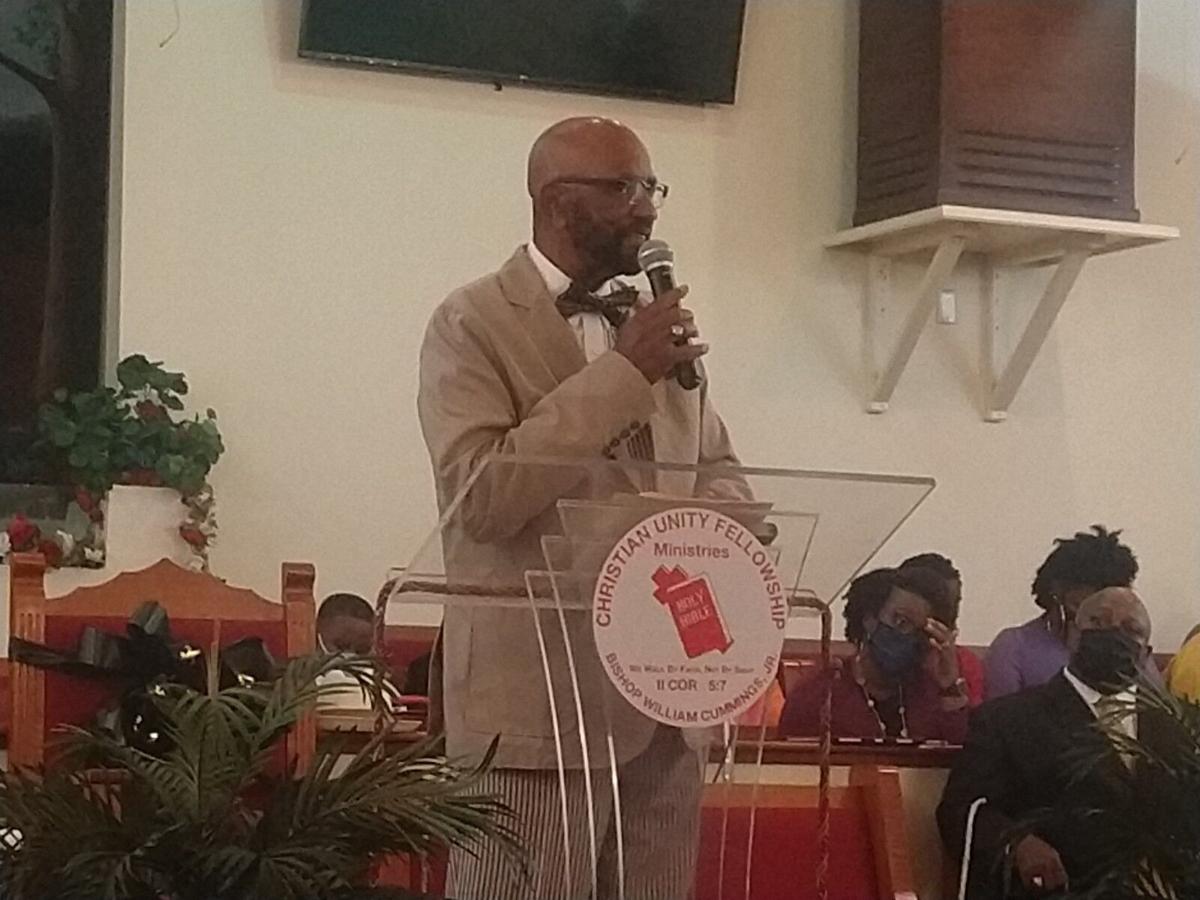 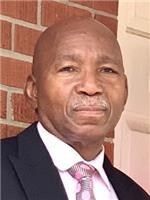 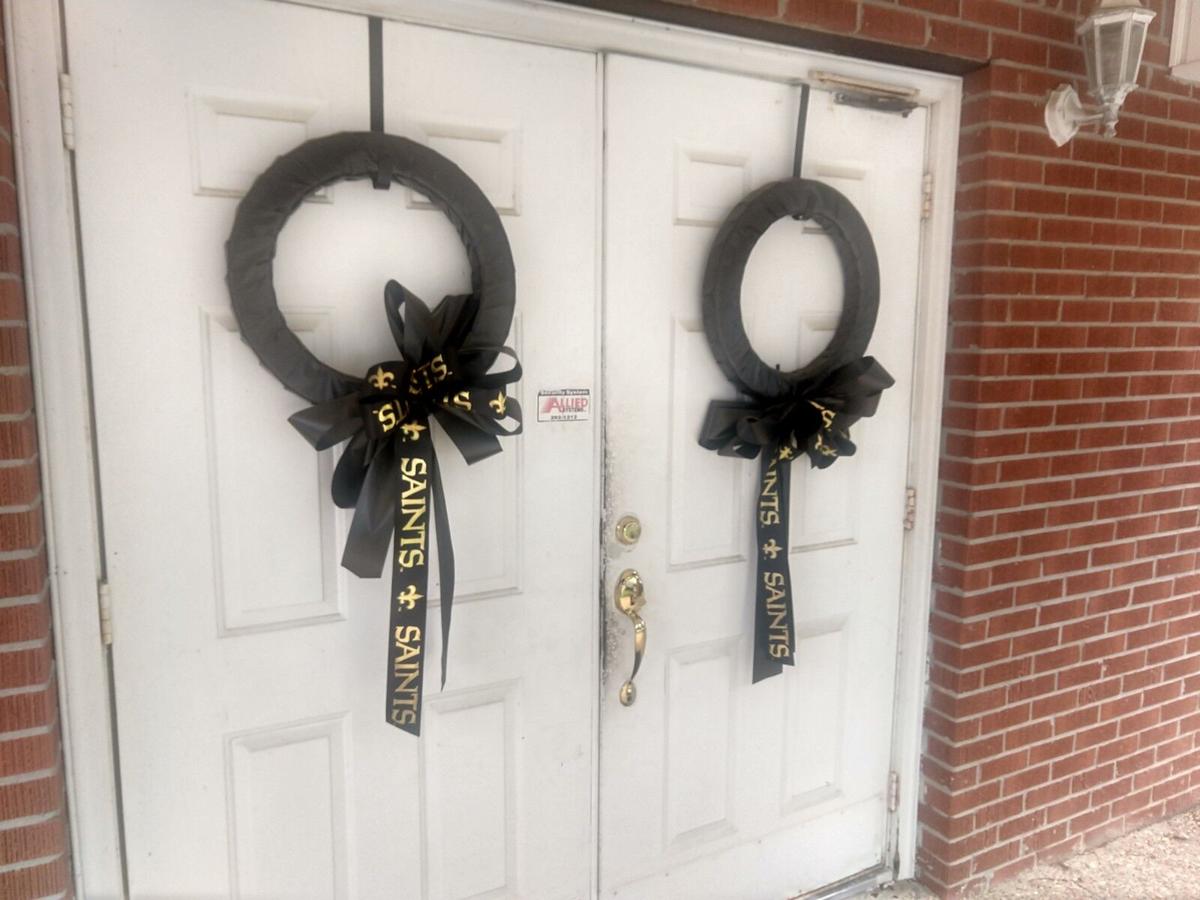 Wreaths on the front of Christian Fellowship Ministries in St. Francisville honor the memory of the late Bishop Williams Cummings Jr. 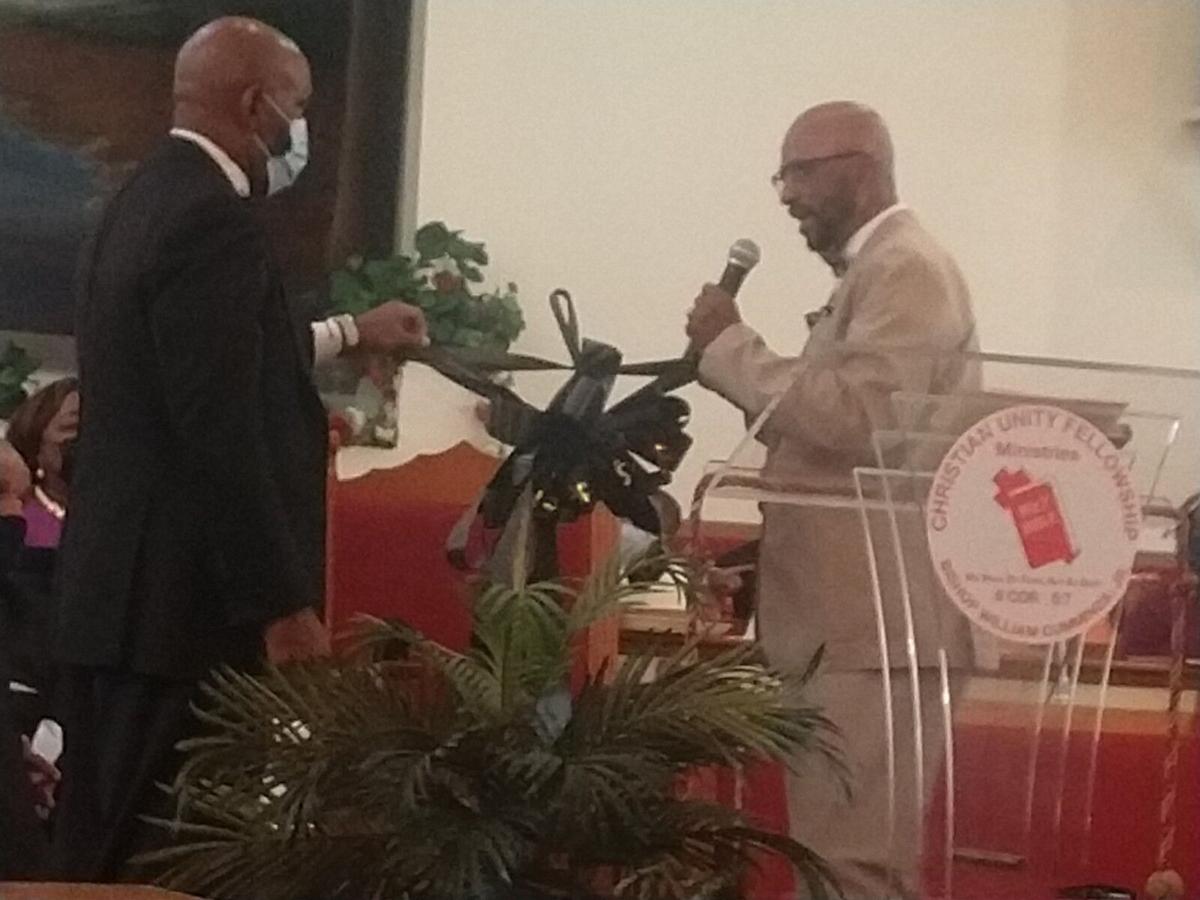 The Rev. Henry J. Brown, right, of Star of Bethlehem and First Emmanuel Baptist churches in Baton Rouge, unveils the seat held in honor of the late Bishop William Cummings Jr. during a service April 18 at Christian Fellowship Ministries in St. Francisville.

Wreaths on the front of Christian Fellowship Ministries in St. Francisville honor the memory of the late Bishop Williams Cummings Jr.

The Rev. Henry J. Brown, right, of Star of Bethlehem and First Emmanuel Baptist churches in Baton Rouge, unveils the seat held in honor of the late Bishop William Cummings Jr. during a service April 18 at Christian Fellowship Ministries in St. Francisville.

An old tradition in Black churches is helping bring comfort, closure and encouragement to Evelyn Cummings as she settles into the leadership role once held by her husband at Unity Christian Fellowship Ministries in St. Francisville.

Last week, the church held a seat unveiling service, a seemingly long-forgotten practice that holds when the senior pastor dies, a black wreath or robe is draped over the vacant seat for at least 30 days as a sign of mourning before being lifted.

Cummings' husband, Bishop William Cummings Jr., died suddenly Feb. 17 in his home in Jackson at the age of 67.

"It was so emotional," Evelyn Cummings said of the service. "It meant so much to me because he was a man of honor, a man of respect, a man who lived the word — not just preached and (taught) but he lived the word in his walk."

The theme of the service was "The Vision Yet Lives."

The program also included high praise and worship music, declarations, a tribute to the children and a message by the Rev. Rayford T. Iglehart, of Gloryland Baptist Church of Baton Rouge. The Rev. Lawrence D. Hardy, pastor of House of Judah Ministries and Unity Christian overseer, presided over the service.

"I'm just elated. My heart is still heavy but not as heavy as it once was. I'm in the healing process," Evelyn Cummings shared with the church.

The most solemn moment came midway through the program when the Rev. Henry J. Brown, pastor of First Emmanuel and Star of Bethlehem Baptist churches in Baton Rouge, marked the official unveiling of the seat.

"The black on the seat exemplifies mourning," Brown said, recalling in the words of Jesus in Matthew 5:4, that "blessed are they that mourn: for they shall be comforted.'"

"For the last several weeks, the family and Christian Unity have been comforted by the preaching, by the deliverance of the word of God. The mourning season is ending today," said Brown, a longtime friend of the family and one of William Cummings' predecessors at the former Elm Park Baptist Church on La. 10.

Brown also referenced the work started by William Cummings in quoting Revelation 14:13: "And I heard a voice from heaven saying unto me, Write, Blessed are the dead which die in the Lord from henceforth: Yea, saith the Spirit, that they may rest from their labors; and their works do follow them."

Picking up the black wreath and placing it in the arms of a teary-eyed Evelyn Cummings, Brown said, "My sister, Dr. Cummings, your mourning has ended. It's time to move on."

Evelyn Cummings, 67, said she felt her husband's presence as she gathered in the wreath.

"When (Brown) handed that over to me, I could hear my husband saying, 'Take it. You can do it,' ” she said.

It's similar to what God had already been telling her.

"(God) has been my rock and strength," she said. "He's been my everything because there are times when I feel like I just want to give up, but I can hear that still small voice that says, 'Don't give up.' … I used to tell him, 'Lord, I can't do this.' ”

Cummings said God would reply that she couldn't do it unless he was with her as a guide.

"I'm going to follow the Holy Spirit and talk to God daily, every chance I get to talk to him during the day," she said. "I was talking to him before this. I got to talk to him even more so now because I want to be led by God."

Cummings said she and her husband weren't always led by God. They were married for 47 years, but their relationship took a dramatic turn about 28 years ago when they realized they were no longer the top priority in each other's lives.

She said once her husband started walking with the Lord, he did it wholeheartedly, eventually answering his call to ministry.

"When he gave up the world, he gave it up for good," she said. "Once he said, 'Lord, I accept and accept the calling,' he went forward and never looked back."

Evelyn Cummings, who accepted her own call into the ministry in 1998, is now looking ahead.

She found encouragement in Iglehart's featured message from Jeremiah 29:10-11: "For thus saith the Lord, That after 70 years be accomplished at Babylon I will visit you, and perform my good word toward you, in causing you to return to this place. For I know the thoughts that I think toward you, saith the Lord, thoughts of peace, and not of evil, to give you an expected end."

As God used the Prophet Jeremiah to tell Hebrews while exiled in Babylon to settle in and trust in God's plan, Iglehart said Christian Unity also has to keep walking with God during its transition.

God has angels watching over Christian Unity, he said.

Iglehart, who said he had never participated in a seat unveiling in 54 years of preaching, commended Evelyn Cummings for being a "real woman of God." He also challenged Christian Unity to be a church of order and live up to its name of walking in unity.

In her remarks at the end of service, Cummings expressed hope and her appreciation for all the prayers, support and visits she's received.

"Out of all the things, I've been through, I still have joy," said Cummings, a Jackson native. "This is a journey that I've never done before. With God on my side, I know that I'll make it. He's (her husband) in a better place. His work is done and I'll have to accept what God allows. Keep lifting us because God is not through with us yet."