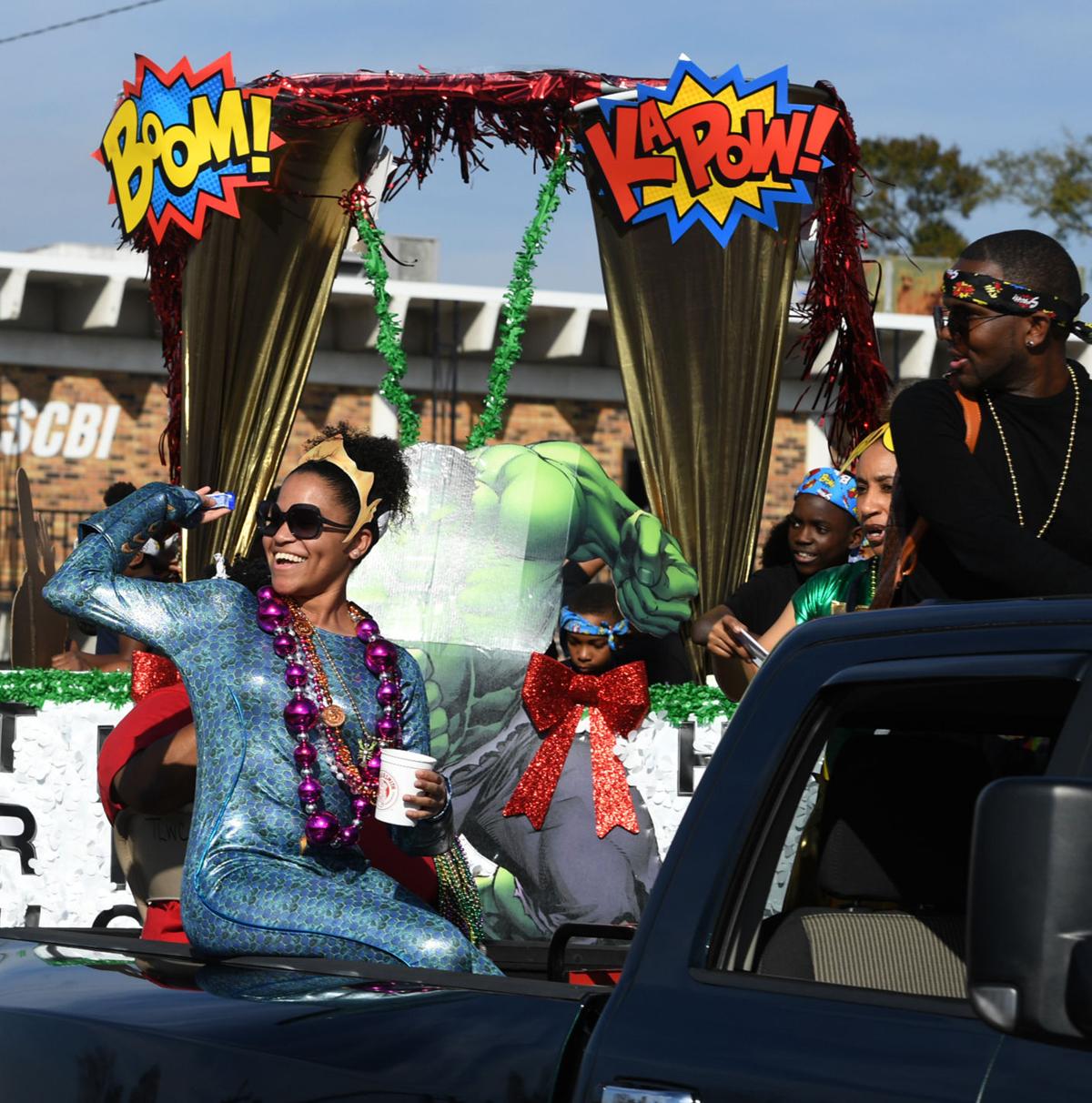 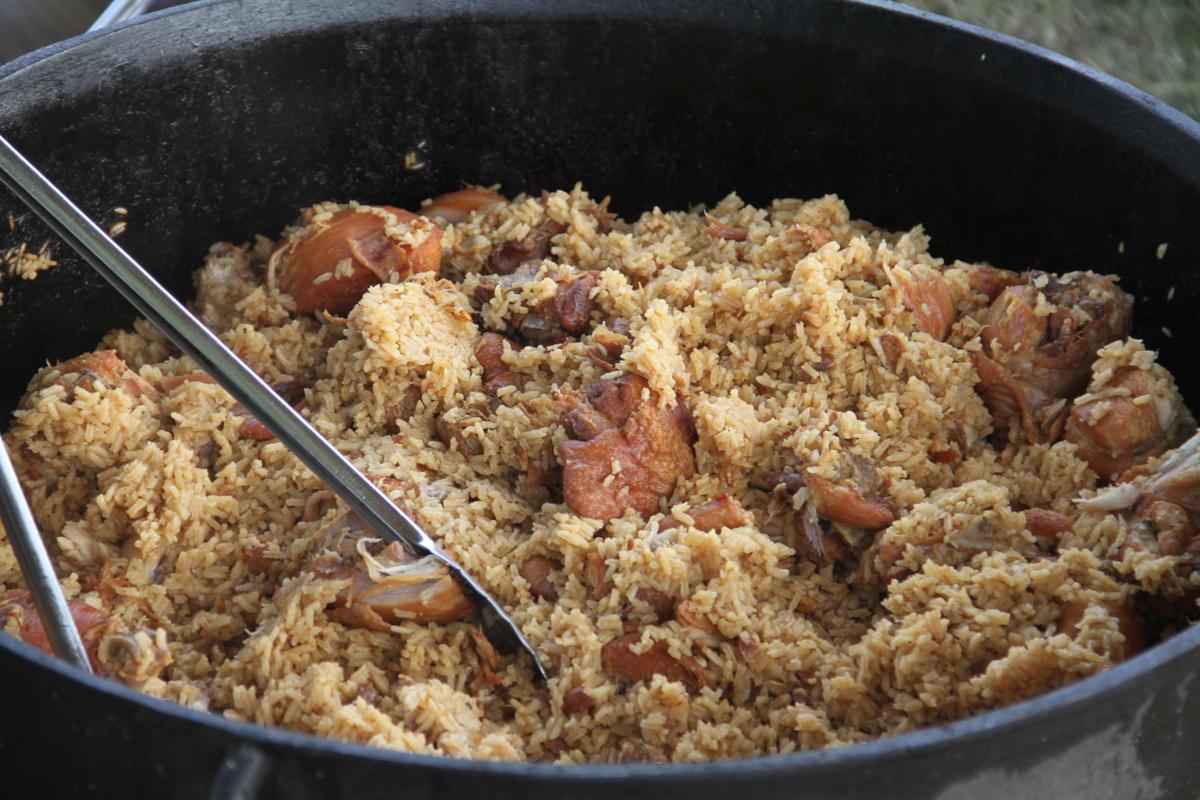 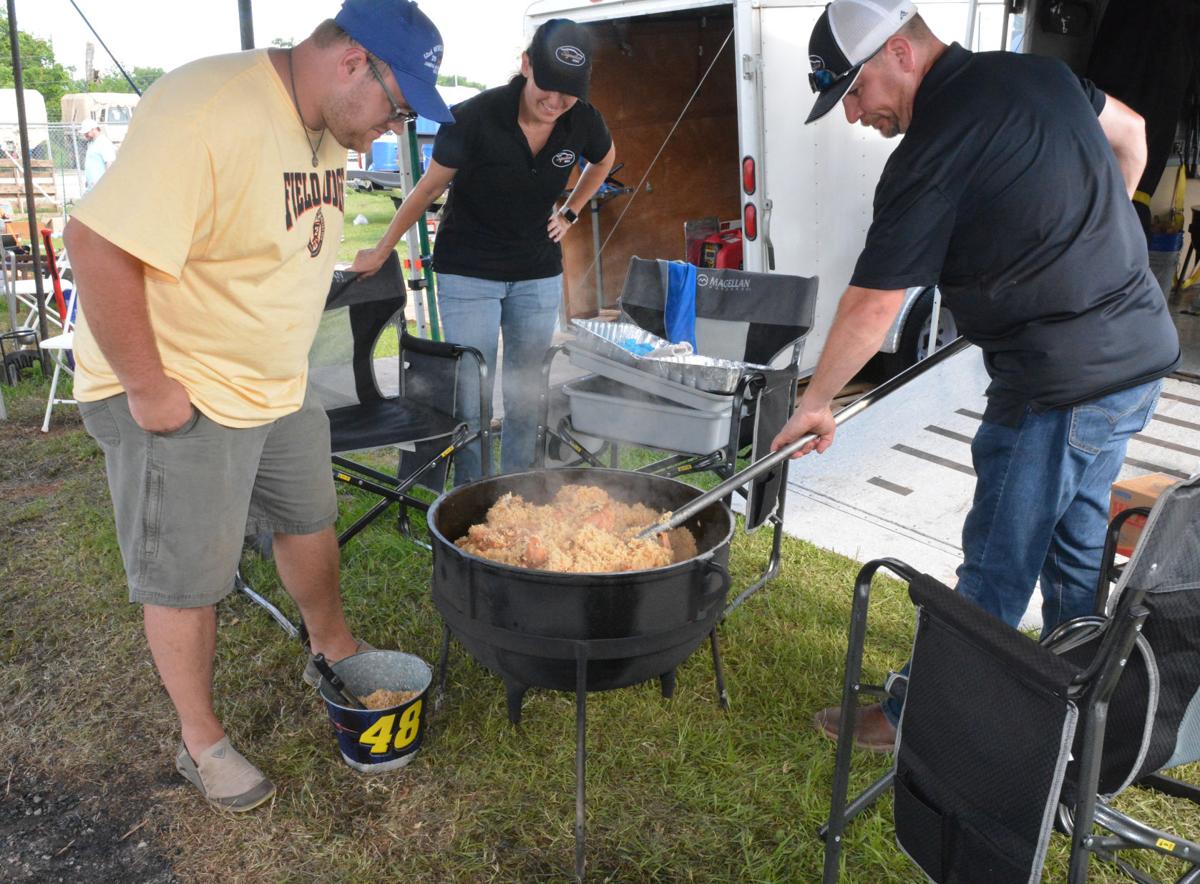 Field Judge Brett 'Hossfly' Reine oversees Koby and Tanil Thacker of the Signature Rides team as they prepare their entry in the final round at the Jambalaya Festival. 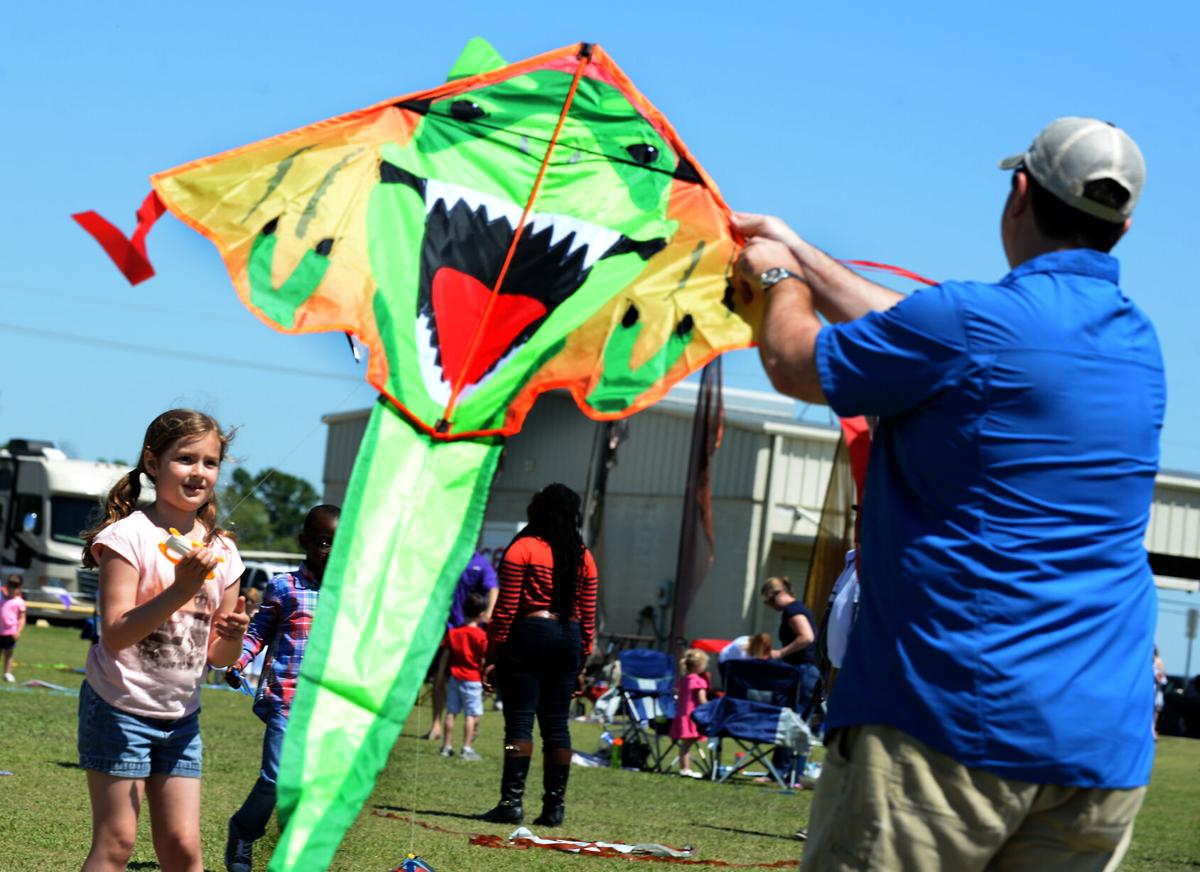 Field Judge Brett 'Hossfly' Reine oversees Koby and Tanil Thacker of the Signature Rides team as they prepare their entry in the final round at the Jambalaya Festival.

After Louisiana’s festival season was sidelined because of the coronavirus pandemic last year, some event organizers plan to return this spring as others wait on the fence while navigating the still uncertain future.

The pandemic has slogged along for nearly a year — longer than many expected — and saw daily life grind to a halt last spring.

A year ago this week, the novel coronavirus took hold across the state, moving beyond its local roots in New Orleans and eventually reaching into all 64 parishes statewide. A cascade of event cancellations soon followed amid a stay-home order that brought steep restrictions to gatherings at a time when little was known about how the virus was spreading.

Will Baton Rouge-area businesses bring back live music indoors yet? Why many say no

Statewide restrictions on live music indoors have been lifted, but business owners said conditional strings attached are too tight and costly …

Carnival season suffered a similar blunting this year after all major Mardi Gras parades were either heavily revamped to accommodate physical distancing or scrapped altogether.

Now in the 13th month under the pandemic’s thumb, many are pining for a return to normal and the ability to celebrate in what is the traditional spring season for Louisiana festivals. Vaccine distribution and a lower infection rate in many parts of the state are giving folks hope.

Gov. John Bel Edwards loosened restrictions last week by allowing bars to remain open at a limited capacity, live music to resume and outdoor gatherings to be held at 50% capacity. That decision follows weeks of declining infections and hospitalizations across Louisiana, a sign the state may be gaining an upper hand against the virus.

Organizers for the 53-year-old Gonzales Jambalaya Festival are mulling plans to move the outdoor street event back toward the end of August from its traditional time on Memorial Day weekend.

Last year, the festival association canceled the event for the first time in its history. Contestants compete for the title of world champion jambalaya chef by cooking successive batches made the old-fashioned way — in cast-iron pots over an open fire.

Wally Taillon, president of the festival association, said even with the recently loosened rules, he doesn’t think the festival could have the same outdoor music and dancing that help make the event what it has become.

He said festival officials, who plan to vote on the calendar shift later this month, will base their decision in part on recent statements by the Biden administration, that enough vaccines won’t be available to every adult until late May, around when the festival would happen. Even that’s still an estimate.

“It’s a shame, man, to be in the situation that we’re in. You don’t know what to expect, you know? And nobody else does,” he said. “The only thing that we can do is try to move it to another date.”

Organizers hope the festival will be able to return to Memorial Day weekend for sure in 2022.

Across the river in West Baton Rouge Parish, organizers for Kite Festival Louisiane plan to see large and decorative kites and fireworks take off in the skies near Port Allen the weekend of May 22.

Like other Southern states, Louisiana this week loosened COVID restrictions to their most relaxed phase since the pandemic began.

Kathy Gautreau, the organization’s executive director, said the 18-acre field for the outdoor event should allow people to physically distance and adhere to any other measures that might be in place at the time.

“In years past, you can see the joy on kids’ faces and even the parents, they enjoy watching the big kites and the professional kite flyers,” she said. “After everybody being cooped up and not being able to do their activities, it’s definitely something I think they’re going to look forward to.”

Despite the vaccines being available for Louisianans who meet certain requirements, less than 10% of the population is fully vaccinated, the latest Louisiana Department of Health figures say.

Weekly averages for new coronavirus infections fell by between 78% and 86% in the Baton Rouge area from the peak of the third surge around Jan. 8 to mid- to late February, state health data show.

Since then, raw daily figures suggest cases may have plateaued or ticked upward a bit. In any case, community spread is continuing, albeit at far lower levels. Hospitalizations and deaths, lagging indicators of viral activity, remain lower also.

Public health officials have also grown wary of more infectious variants that would require even more people to be vaccinated than once thought. An even greater fear is the emergence of new variants that can sicken those who’ve been vaccinated.

State health officials have cautioned people to not let up their guard even with the relaxed guidelines, warning that it could undo the progress the state’s made.

Two of the Baton Rouge area’s major event facilities, the Raising Cane’s River Center in Baton Rouge and the Lamar-Dixon Expo Center near Gonzales, have held sporting events, dance competitions, consumer shows but no live entertainment since early in the pandemic.

Managers of both facilities said they were weighing how to apply the new rules and resume live music and other entertainment and are considering what acts will want to play for reduced crowds.

Louisiana to move to Phase 3 of coronavirus restrictions, bars allowed to open statewide

After seeing the worst spike of the pandemic recede in recent weeks, Gov. John Bel Edwards on Tuesday moved the state into the loosest phase o…

Center officials aren’t sure if the 8,900-seat center arena would be held to a 250-person limit or a 50% of the capacity limit and, if the latter is the case, how many guests could fit and also be socially distanced, he said.

Crooks said most artists are pushing tours into the late third or fourth quarter of this year or into next year.

Kyle Rogers, general manager of Lamar-Dixon, which is a 247-acre multi-use complex with several enclosed venues and plenty of outdoor space, said the facility hasn’t had live music or served alcohol in a year, though it has served food with table service.

But the center has recently garnered new interest from promoters. Rogers said he’s hopeful of announcing some acts soon. Even with advantages Lamar-Dixon has with its outdoor settings, Rogers said creativity will still be needed to meet state guidelines and offer solid economics for the center and the artists.

“The earliest we would do one probably would be May, as far as live music goes,” he said.

Spanish Town Mardi Gras organizers are eyeing potential events later this year, including a ball and possibly a parade.

Despite the uncertainty this year, organizers had been waiting out with hopes restrictions would relax in time for the parade. In that time, several who participate in the parade bowed out due to the uncertainty and concerns a muted event wouldn’t be the same.

After 41 years of setting up the city’s largest Mardi Gras celebration, King said organizers have plans for a parade down pat and would only need about 45 days to be ready to roll if given the green light.

Holding a ball would at least help make up the financial blow of forgoing events during the most recent Carnival season, which is used to help fund local charities, like the Greater Baton Rouge Food Bank, King said.

“I think the festivals need to come back,” King said. “It helps the cities and the parishes.”

Taillon, the Jambalaya Festival president, said a few dozen chefs who compete each year have continued cooking jambalaya through the year to help raise money for local charities, keeping up their culinary chops for future competition and also maintaining the association’s community fundraising.

Taillon had little doubt that many jambalaya chefs will be back for the next festival, he said.

“Any time you have a $3,000 grand prize with a $2,000 ring, plus being ‘champion of the world, jambalaya contest winner,’ that’s a prestige you can’t hardly turn down,” Taillon said.

The blues will be back.