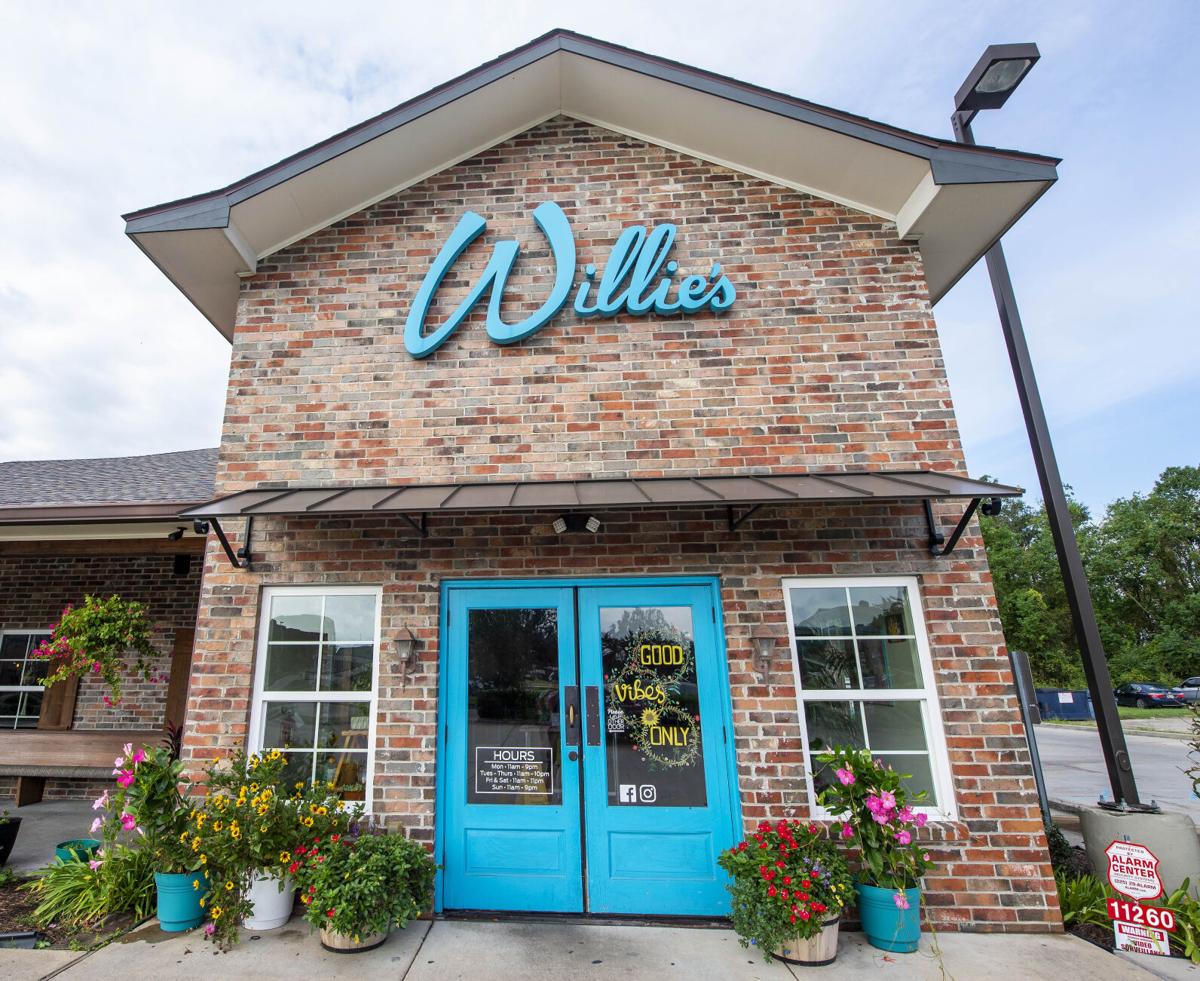 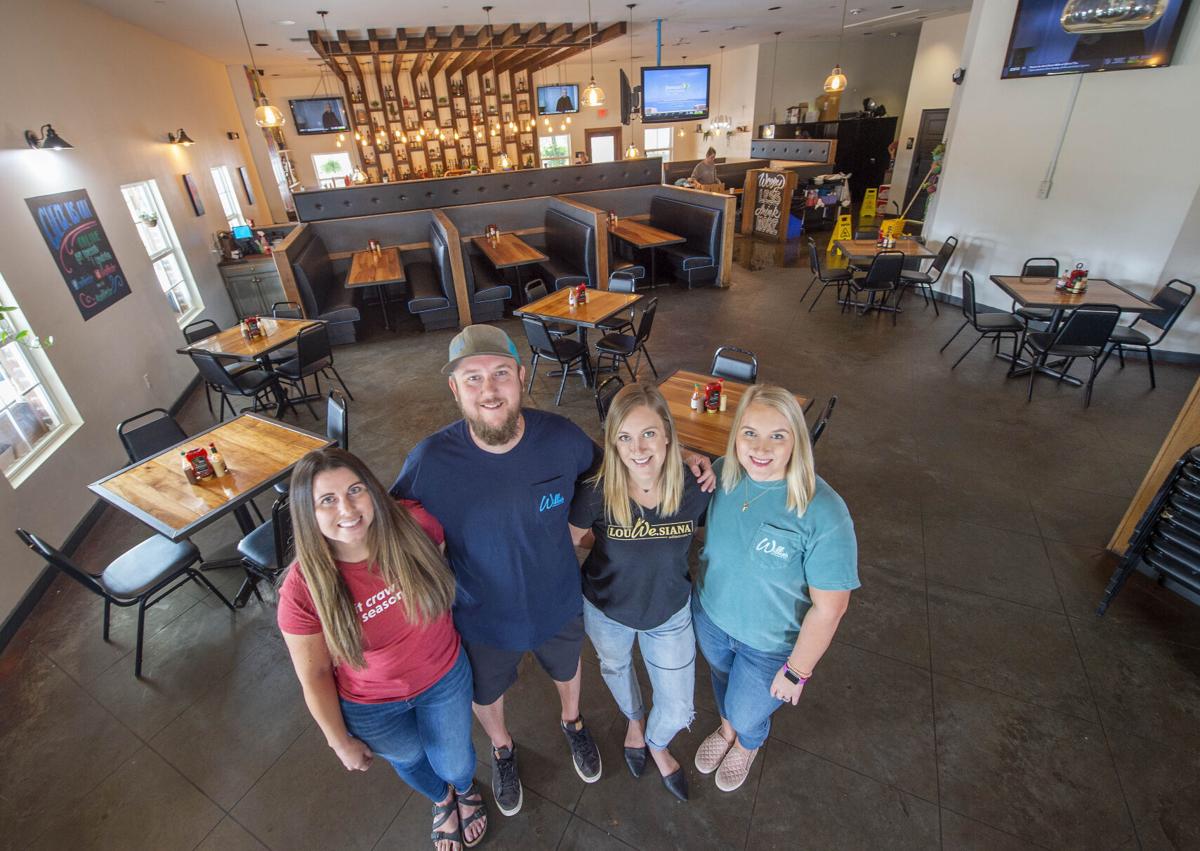 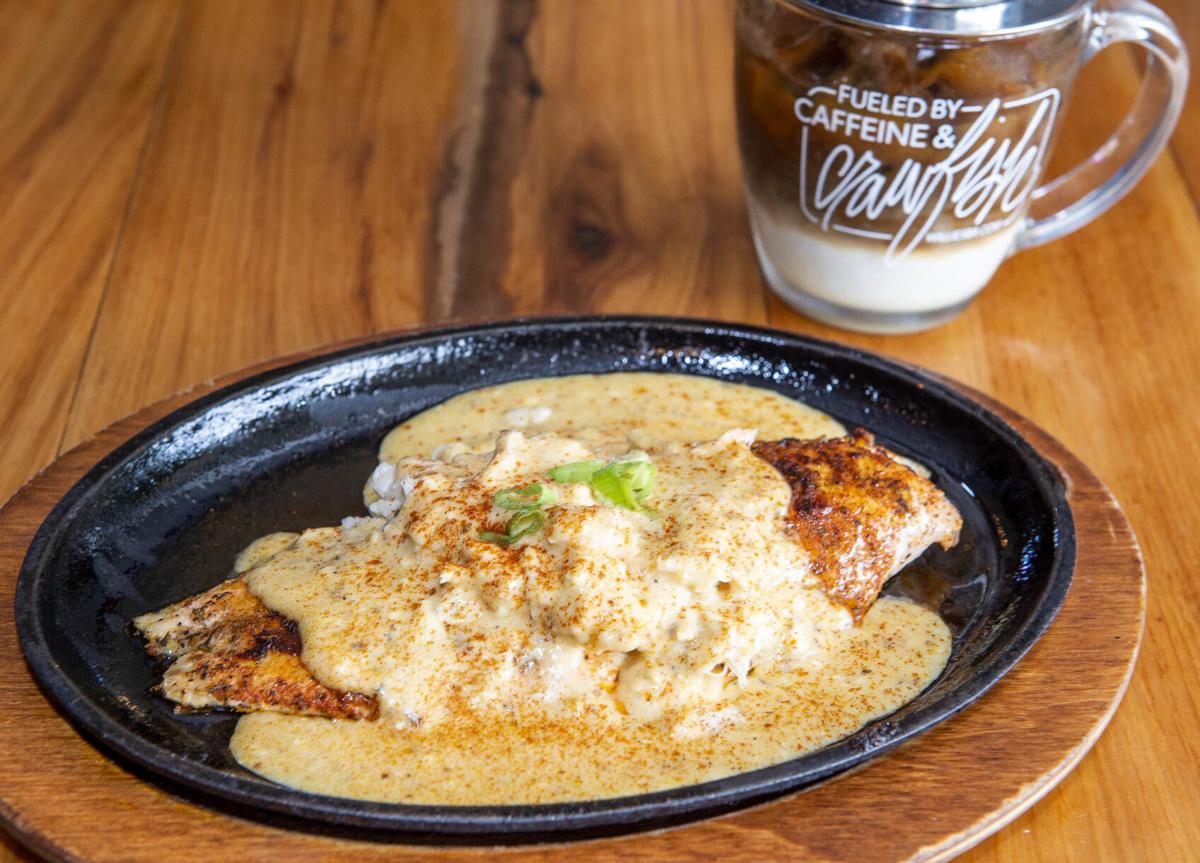 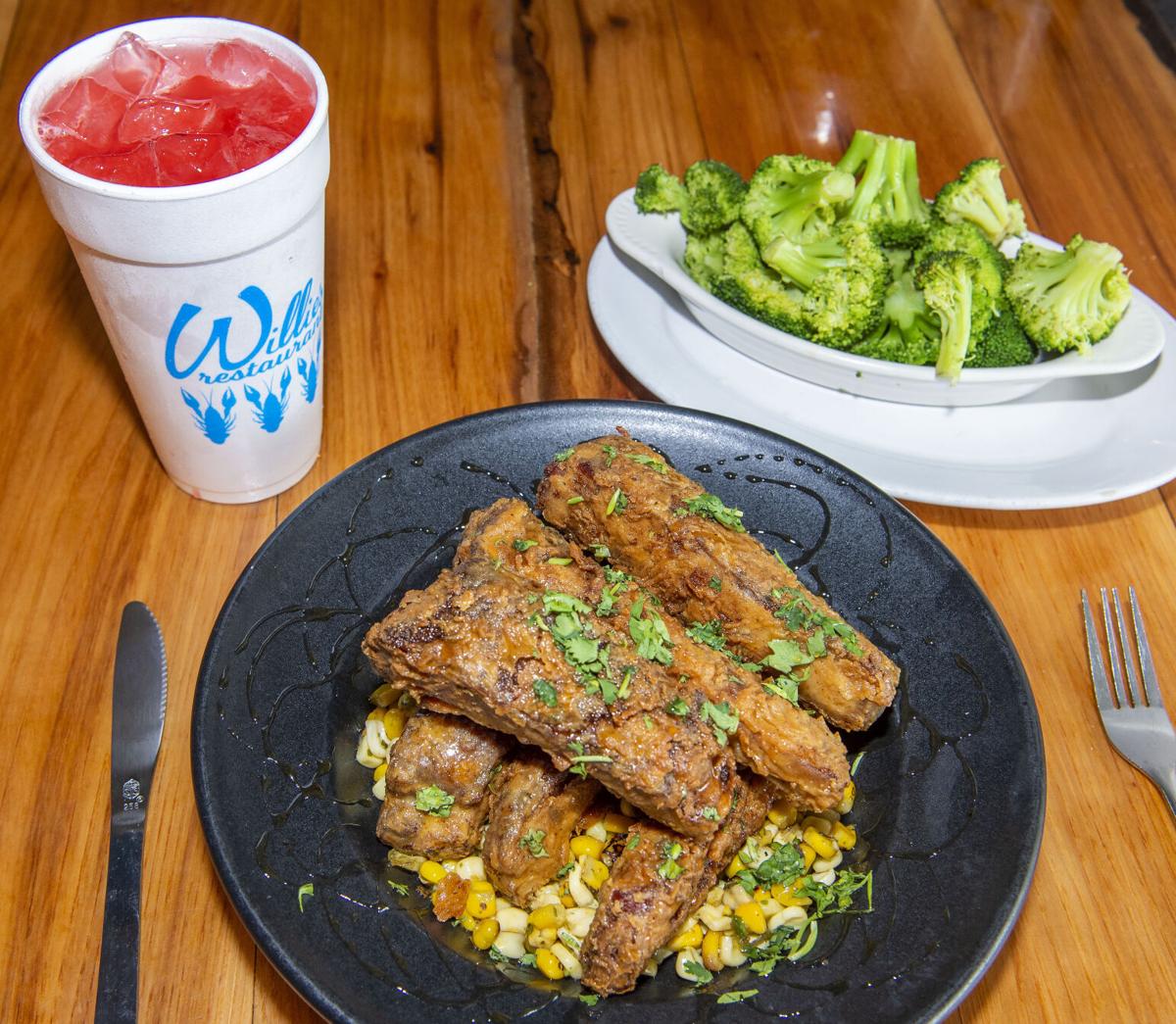 Among the customer favorites at Willie's are the Fried Ribs, served on a bed of roasted corn with a side of steamed broccoli, and Willie's Punch. 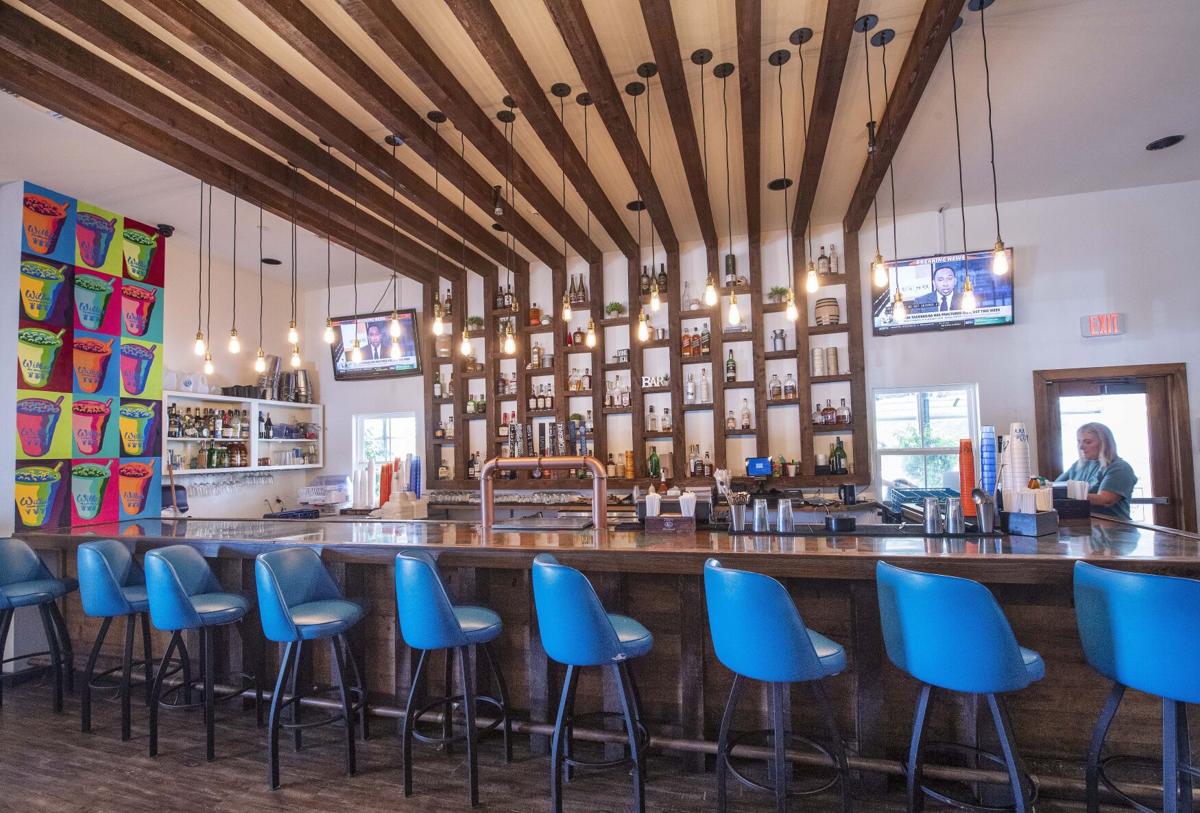 The colorful bar at Willie's is highlighted by a mural painted by Emily Hazelwood, who also is in charge of the restaurant's marketing and branding. 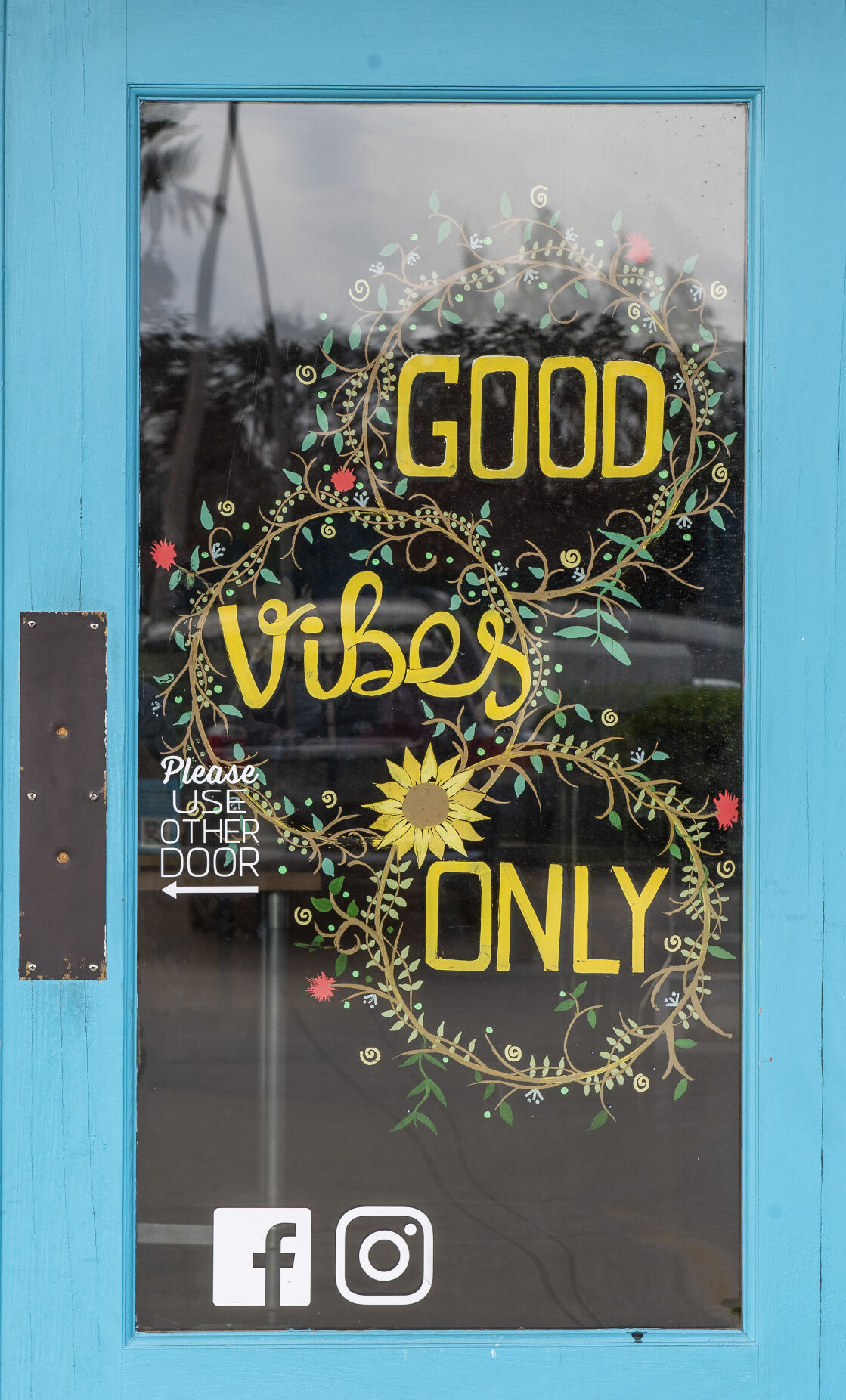 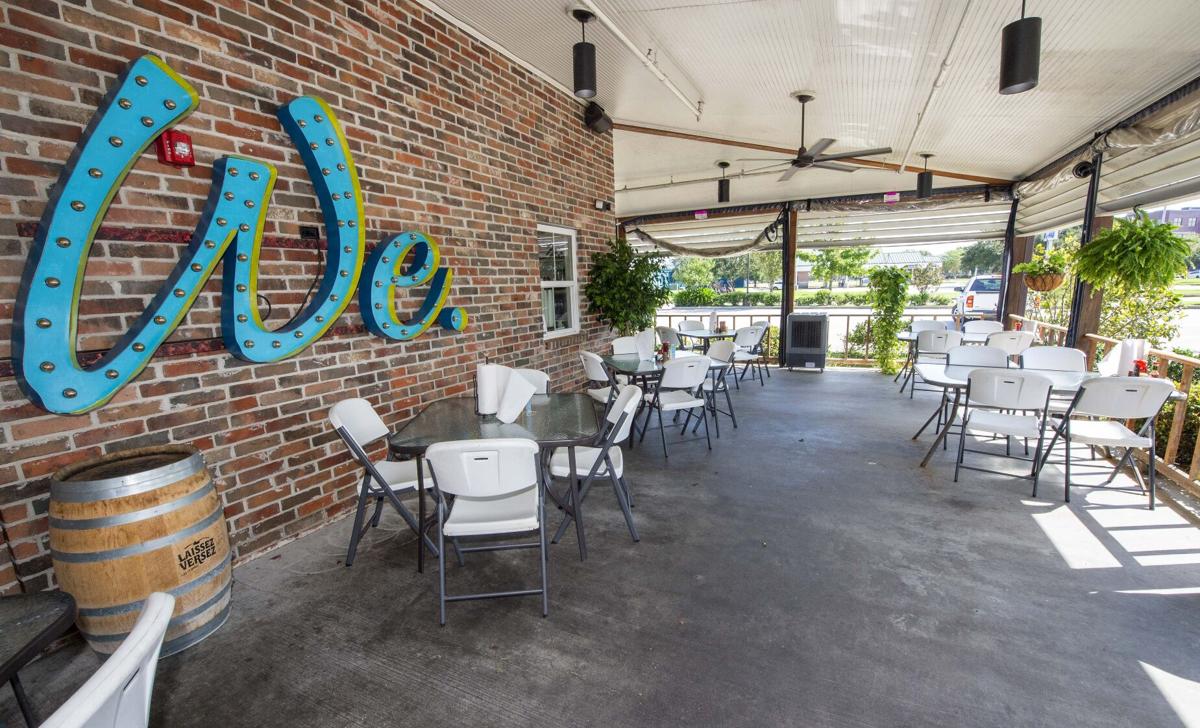 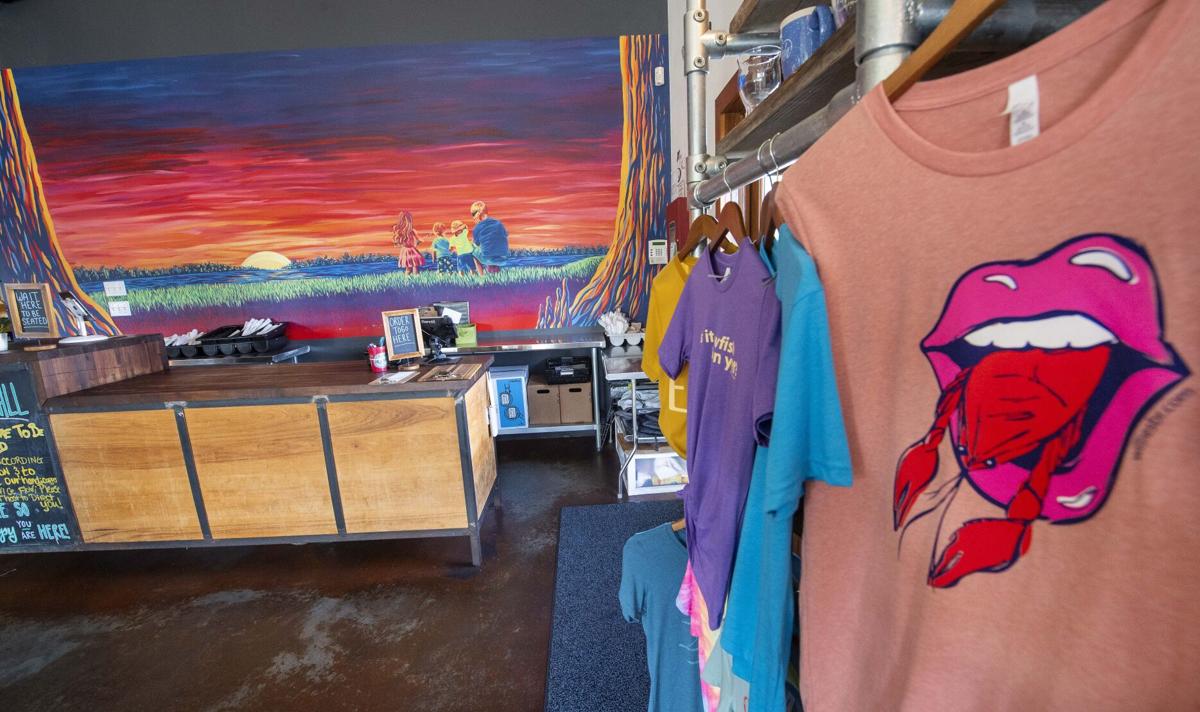 Among the customer favorites at Willie's are the Fried Ribs, served on a bed of roasted corn with a side of steamed broccoli, and Willie's Punch.

The colorful bar at Willie's is highlighted by a mural painted by Emily Hazelwood, who also is in charge of the restaurant's marketing and branding.

And that's just what Willie Chapman and his family bank on at Willie's Restaurant & Bar, 11260 Coursey Blvd.

There, the memories are based on the foods Chapman and his sisters, Emily Hazelwood and Amanda Singley, grew up eating in DeRidder. Add to that the memories of his wife, Kayte, who is from Baton Rouge.

And, of course, there are the memories customers have made at the restaurant.

"Those memories and building that menu are very important for longevity," Chapman said. "Sometimes restaurants can come in and be very trendy and fit in with the times or what's current, but that's harder to maintain over a long time.

The family works as a team at Willie's, each handling their own area of the operation. Kayte Chapman handles the front of house and bar, Hazelwood is in charge of branding and marketing, and Singley oversees development.

Willie Chapman runs the whole show but quickly acknowledges that the show isn't his alone.

"We're extremely competitive amongst each other," Chapman said. "So we make sure that no one can call the other person lazy, because lazy is a toxic word in our family. I think that drive is a constant effort in our family."

And that drive began in their west Louisiana childhood, when the Chapman kids pitched in with family chores. Their mom, Mary, who often cooked, also had a job as a pharmacist in Alexandria.

That was an hour away, so while waiting for her to get home, Hazelwood took over the dinner duties.

"That's when we started joking about, 'Is this going to make the menu one day?'" Hazelwood said.

Their dad, Frank, got them to school and sporting events, and their grandmother, who lived behind them, always made fried chicken on Sundays.

That's one of the Chapmans' biggest food memories, and, yes, it made the menu as Killa's Hot Chicken, a play on Willie and Kayte Chapman's son's name. The chicken is juicy on the inside and coated in Willie's Killa Good spicy mix on the outside.

Other menu items also are named for Chapman family children, including the Redfish Ryn, named for Willie and Kayte Chapman's daughter.

It can all be washed down with Kayte Chapman's cocktail specialty, Willie's Punch, made of wine-soaked fruit.

And then there's the crawfish.

It's Willie's top seller when the mudbug season comes around, with up to 16 sacks boiling at a time in the kitchen. Pots are seasoned, then rotated to maintain an uninterrupted supply for diners.

"When crawfish season is going on, we're constantly boiling them," Chapman said.

To cook the crawfish, Chapman hired Lanny Kleinpeter, who worked at Chapman's original restaurant, Mike Willie's on Cloverland Drive. Chapman ran that eatery with a business partner in 2009. When the partner left, the name was shortened to Willie's after moving to its present location in 2015, where the restaurant employs up to 70 workers and seats some 200 people.

"Lanny told me he already knew how to cook crawfish, but I wanted to make sure that we brought west Louisiana to east Louisiana," Chapman said. "East Louisiana likes their liquid oil. They don't want seasoning on (the) outside of crawfish, whereas people in west Louisiana sometimes don't put any seasoning in the water."

Chapman and Kleinpeter eventually compromised on a recipe and contracted with a crawfish farming family in Rayne who became the restaurant's only supplier.

Like the crawfish, almost all the food cooked at Willie's is sourced from Louisiana farmers and suppliers.

"If we can't get our products from Louisiana, we make sure they're from the United States," Chapman said.

Chapman's restaurant journey in the capital city began when he moved from DeRidder to Baton Rouge to attend LSU. He worked at Plucker's while in school, then moved to Zea's Rotisserie & Bar, then Juban's before entering opening Mike Willie's.

Meanwhile, Chapman and his crew are focusing on growing, purchasing the lot behind the restaurant to build a wholesale distribution business. Other plans include retail distribution of Willie's seasonings and sauces.

At Willie's, it's his family's vision on the menu and in the "good vibes" of the interior.

"Our overall feeling, brand and everything we try to push is that we expect you to be able to come in and flip-flops and be comfortable, yet we also want it to be a place that you can bring a date," Chapman said. "And the food has to match that.

By the way, the family involvement extends beyond Chapman, his wife and sisters.

His mom helps keeps records and analytics on the business side, and his dad serves as the restaurant's most honest food critic. While Chapman, his wife and sisters are working, his in-laws, Kathy and Terry Clair, babysit all the kids.