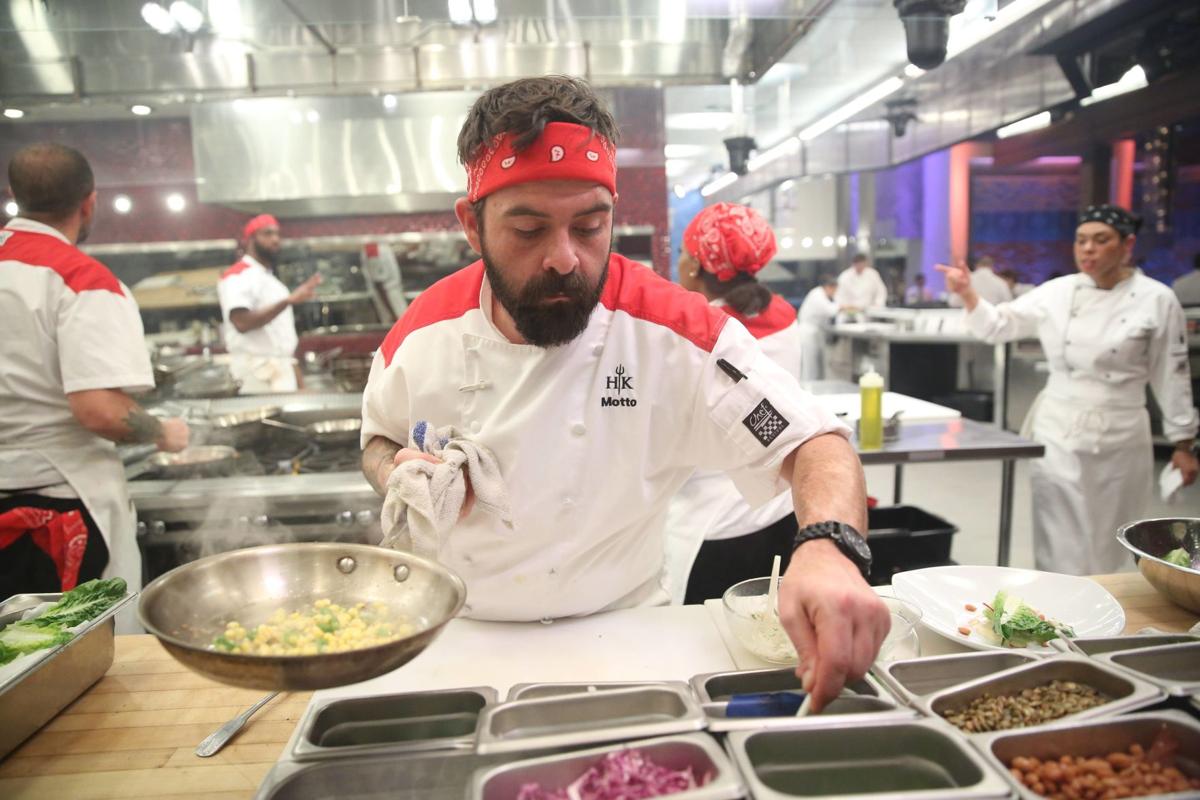 Chef Chris Motto won't be competing, but he will be assisting the two remaining cooks during the two-hour 'Hell's Kitchen' finale at 7 p.m. Friday. Motto bowed out of the show last week, saying he wants to return to Baton Rouge to continue helping raise the city's culinary standards. 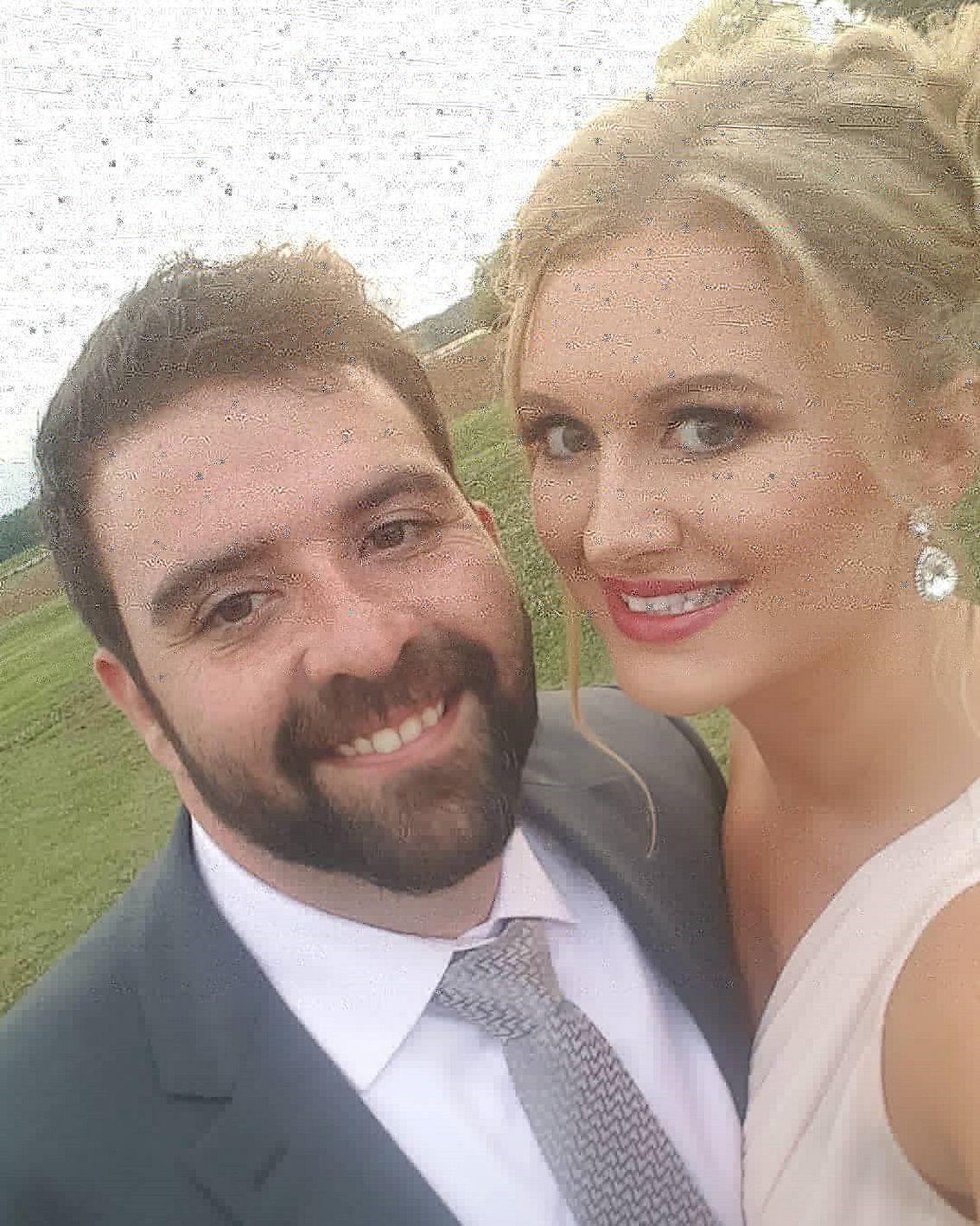 Wanting to start a family was one of the reasons chef Chris Motto, shown here with Brooke, gave for bowing out of the 'Hell's Kitchen' competition. 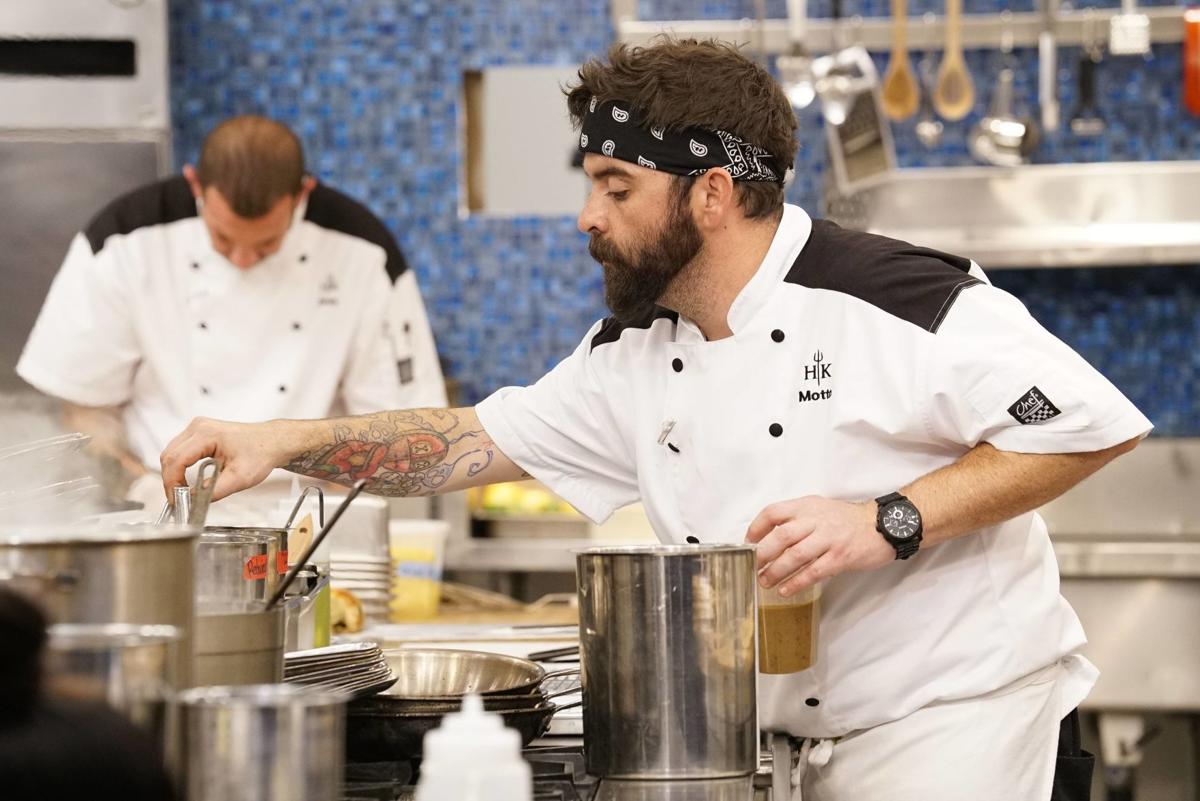 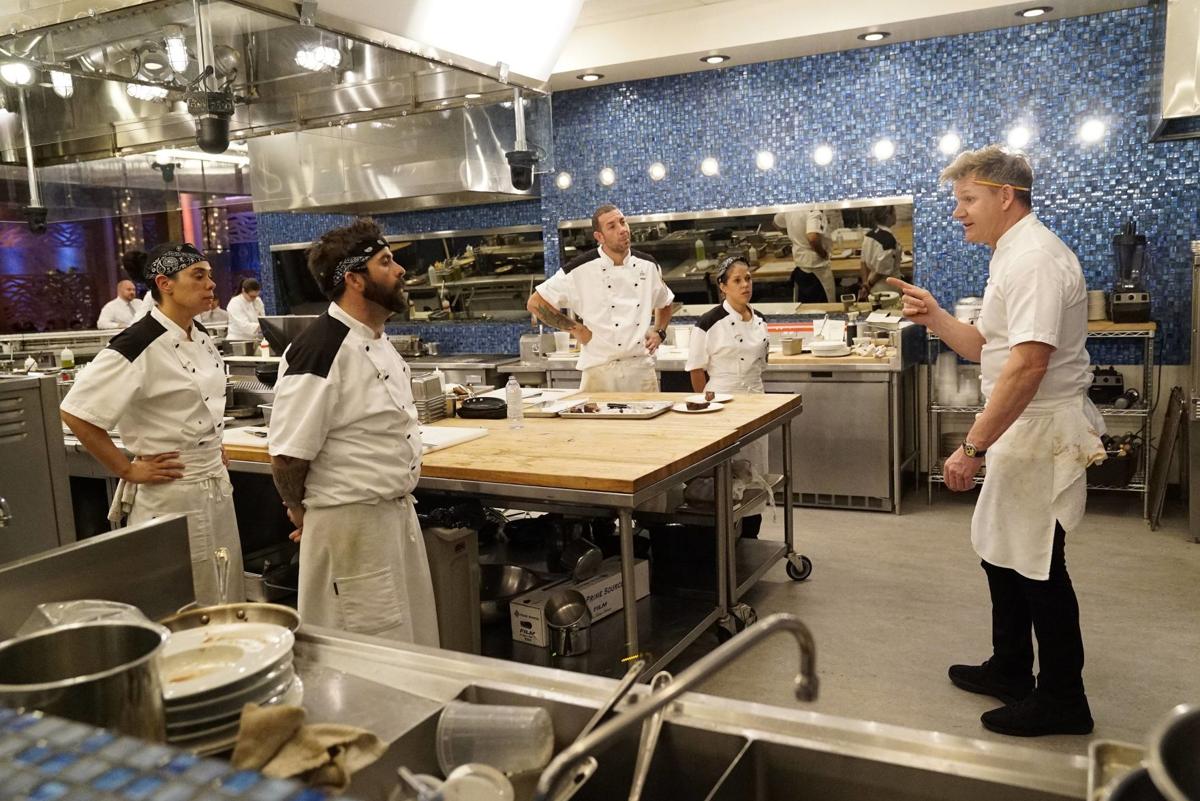 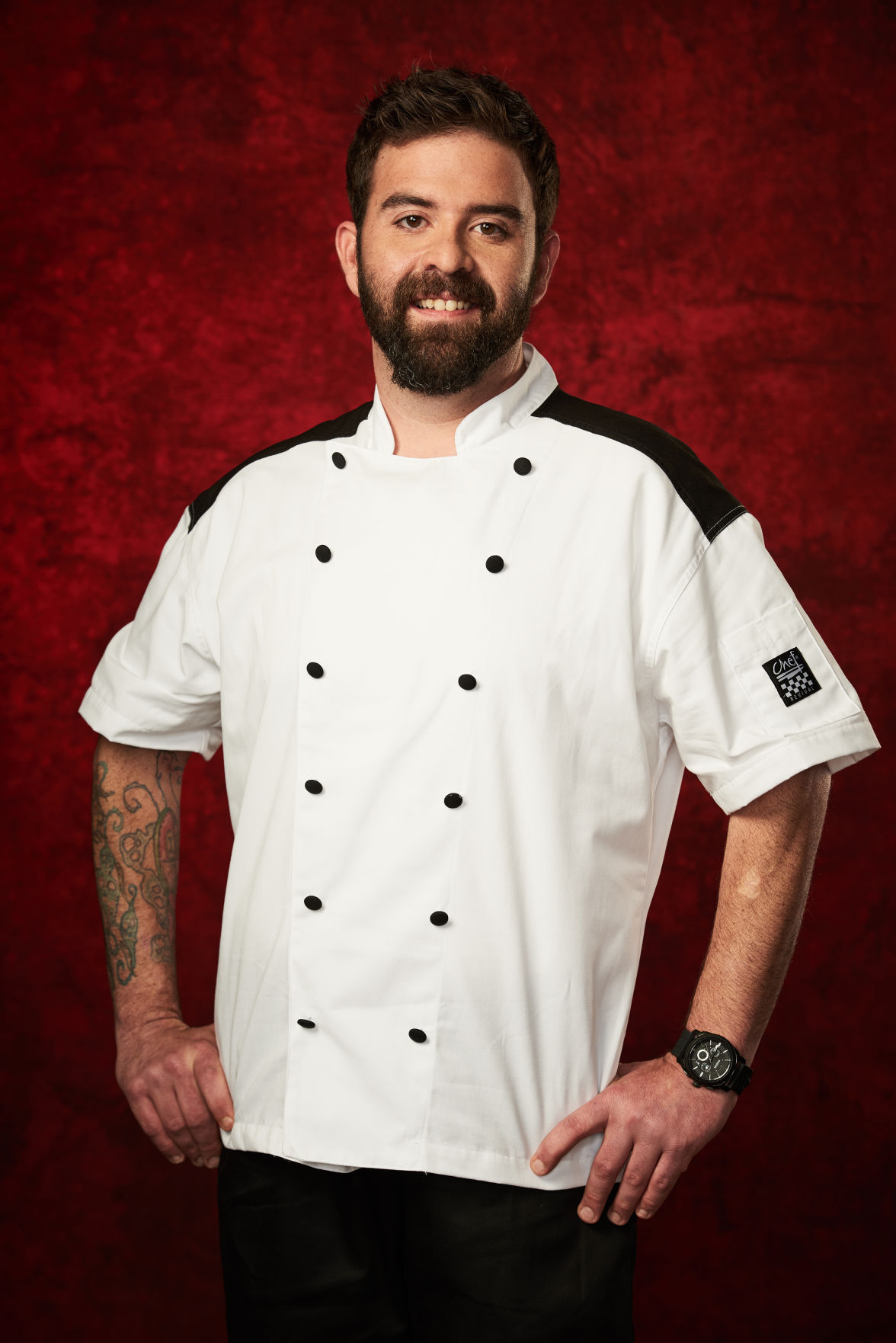 Chris Motto, executive chef at Manurs on the Boulevard, says FOX's 'Hell's Kitchen' taught him a lot and gave him a chance to work with incredible chefs. 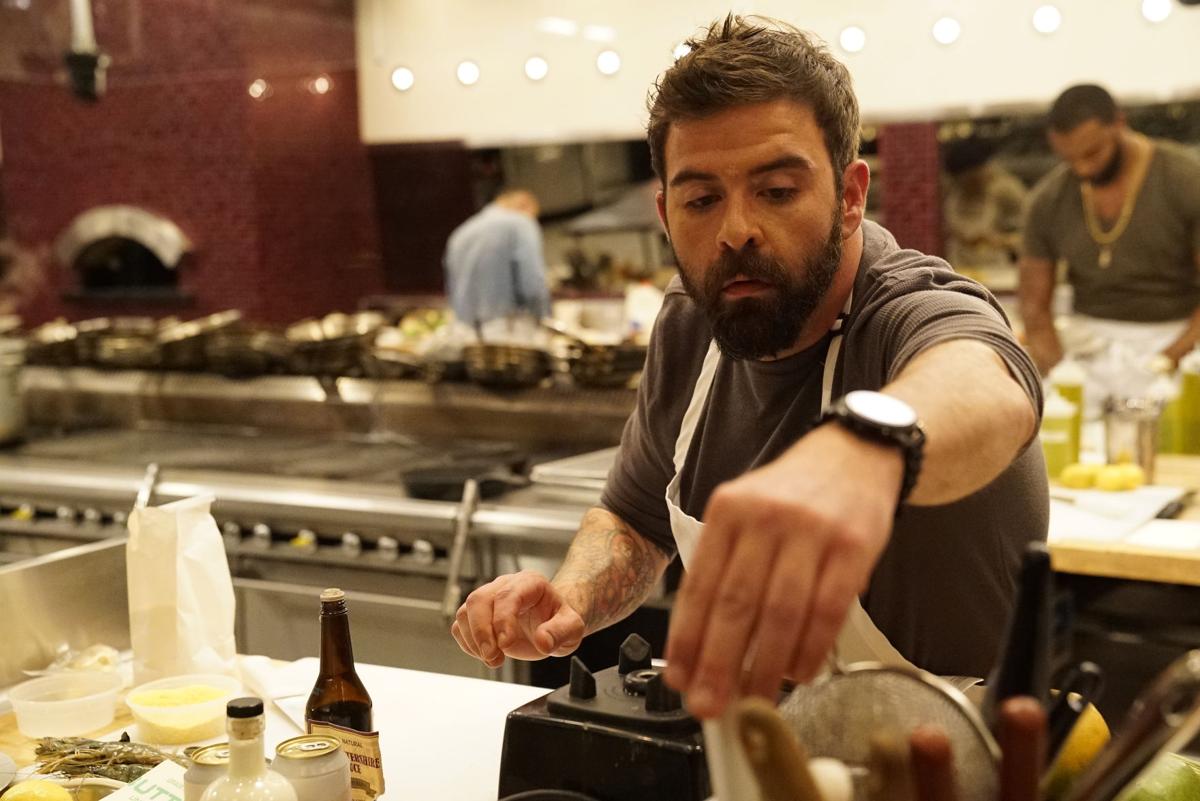 Chef Chris Motto, shown cooking his first dish on FOX's 'Hell's Kitchen' on Sept. 28, bowed out of the competition on Feb. 1. He  says he learned a lot from celebrity chef/host Gordon Ramsay.

Chef Chris Motto won't be competing, but he will be assisting the two remaining cooks during the two-hour 'Hell's Kitchen' finale at 7 p.m. Friday. Motto bowed out of the show last week, saying he wants to return to Baton Rouge to continue helping raise the city's culinary standards.

Wanting to start a family was one of the reasons chef Chris Motto, shown here with Brooke, gave for bowing out of the 'Hell's Kitchen' competition.

Chris Motto, executive chef at Manurs on the Boulevard, says FOX's 'Hell's Kitchen' taught him a lot and gave him a chance to work with incredible chefs.

Chef Chris Motto, shown cooking his first dish on FOX's 'Hell's Kitchen' on Sept. 28, bowed out of the competition on Feb. 1. He  says he learned a lot from celebrity chef/host Gordon Ramsay.

"I watched it again today just to make sure I didn’t dream it last night! LOL"

The comments poured onto Chris Motto's page over the weekend after the local "Hell's Kitchen" contestant shockingly bowed out of the FOX reality cooking competition series just one week before the finale. The remarks were overwhelmingly positive for the 37-year-old Denham Springs chef who's been executive chef at Mansur's on the Boulevard for almost 10 years.

"I'm not one to give up on anything, but I think at the end of the day, the place I need to be is back home," Motto told his three fellow finalists during Friday's episode as they discussed who amongst them they'd be nominating for the chopping block. "I want to go back. I want to start a family. I want to raise the culinary standards in Baton Rouge. That's what I've been working on the last five years. I'm not ready to give up on that."

"It takes so much for a person to say something like that, and when you witness someone really, really understanding that they know exactly where they want to be, it's just an amazing thing to witness," she said.

"Dude!" added Mia Castro, a private chef from Miami Beach, Florida, and the only rookie still in the running to win "Hell's Kitchen's" 18th season.

Motto left behind a chance to earn the $250,000 prize and a position at Gordon Ramsay's Hell's Kitchen Restaurant in Las Vegas.

Back in the kitchen, Motto broke the news of his decision to host Ramsay.

"I don't want to give up on Baton Rouge. I want to go back and share this knowledge that you've given me and elevate that town's culinary scene," he told Ramsay.

"I'm surprised, but I respect your decision," Ramsay replied. "You know, never before across this competition have I ever met a chef as sincere as you, so whilst I accept your decision, I want you to accept this from me: Once you're done in Baton Rouge, and you're ready for the next move, call me."

This all unfolded after a night in which Motto had cooked New Orleans-style barbecued shrimp tableside for well-known chef/judges, and took his turn at running the kitchen during a busy dinner service.

Shot in February 2017 in Los Angeles, Motto has had to keep the season's outcome a secret. He's also had time to reflect on his experience on "Hell's Kitchen," his first TV competition series.

You stunned everyone with your exit. How long had you been contemplating this? Did you go into the competition thinking you'd just see how far you'd get, never expecting you might be in a position to have to move to Vegas?

I never sought out "Hell's Kitchen" or any other show for that matter, but when the opportunity arose, I could not pass it up. A chance to learn and work with incredible chefs, as well as gauge myself against amazing chefs from all over the country. I left with no expectations of performance and was going to take it one day at a time. After a while, I realized that there was a chance of me winning, which posed a different question. Do I really want to move to Vegas? … No. I had gained so much respect for chef Gordon Ramsey and was appreciative of his teaching and mentoring. I felt it would be disrespectful to continue competing for money only, a slap in the face as to the opportunities he gave me. At the time of my decision, I felt as though I had nothing left to gain from "HK" and needed to deal with that.

In your Facebook post Saturday morning, you talk about the things going on in Baton Rouge at the time you left for the show. Were you directly affected by the flood? And you guys had no contact with the outside world during the show so you didn't know anything about what was happening back home, right?

I had a lot of family directly impacted by the flood and still rebuilding. Two years ago, Baton Rouge was only getting negative press (the Alton Sterling and police officer shootings, the August 2016 flood and its aftermath), if any. So yes, I wanted to send positivity that way. I am by no means bashing Baton Rouge as a subpar city that needs dramatic improvement; however, I do feel as though I have a unique opportunity to continue positive changes."

Do you have specific plans going forward on elevating Baton Rouge cuisine? What is it that the city is lacking?

Baton Rouge is great! Part of why I returned. But the city-food scene is lacking exposure. We have our own scene here, and we all work hard every day to improve and allow consumers to become more adventurous eaters. I will continue to push my staff as well as myself to get better everyday. There are so many great chefs here that no one knows about. I could list everyone of my employees, especially Barrett Meeks, as well as many other chefs such as Jon Breaux from The Merchant, Danny Santana (Bin 77), Phillip Beard (Bumsteers, formerly of Cecelia), Justin Lambert (The Gregory), Scott Varnedoe (Juban's), Cong Nguyen (Umami). … I could go on and on. These guys deserve recognition for what they are doing as well. It has to be a group effort to truly make Baton Rouge a true culinary destination. I'm just hoping for more opportunities of collaborative efforts. And always looking for growth. A new concept is being discussed and hope to make it a reality sooner than later.

So were you at the finale taping, and if so, were you pleased with the winner?

I do know the winner, and I will still be cooking in the finale episode. I'm thrilled with the outcome, but you' ll have to watch.

What was your favorite part of being on "Hell's Kitchen"? The worst or most challenging part?

The education! Most challenging thing was never knowing what was next or ability to plan.

Do you think the show accurately reflects what actually went down in the kitchen?

The show is real. Real life — nothing is scripted. We knew as much as you did as it was happening. Obviously, there are lots of edits because we were working around the clock and air a one-hour episode. But I think they very accurately depicted the scenario.

What other TV competition series would you want to be on? Would you consider a return to "Hell's Kitchen" as a veteran?

Thoughts on the fiery chef Ramsay (famous for his rants and cursing in the kitchen, often throwing dishes and/or food at the nearest wall)?

Chef Ramsay is incredible, hard-working, passionate; his mentoring is the best I've witnessed. He gives back to the community, and so much more. He's not just an (expletive) chef that he may be depicted as. And, yes, I did say to him, "You're the (expletive) man!"

You've said you had full support from the Mansurs group. Did you guys have an agreement, financial or otherwise, should you win the competition and have to leave your position?

Mansurs has been more than supportive of my journey and continues to support me as I do them. And that was a bridge to cross if it came down to it. I did know I still had a place when I got back, though.

Will you be watching (the show) next Friday? Will the restaurant be showing it as usual?

I will be watching with old friends in Lafayette — I'm originally from New Iberia — and I'm sure the TVs will be on here at Mansurs.

The support has been unreal, and this adventure has been so much more than I could have ever imagined. We are all responsible for our choices. No one should determine how you lead your life other than yourself, and decisions are not always easy, and it gets harder when everyone is watching. Stay true to yourself, trust your instincts, be kind to one another and love life!