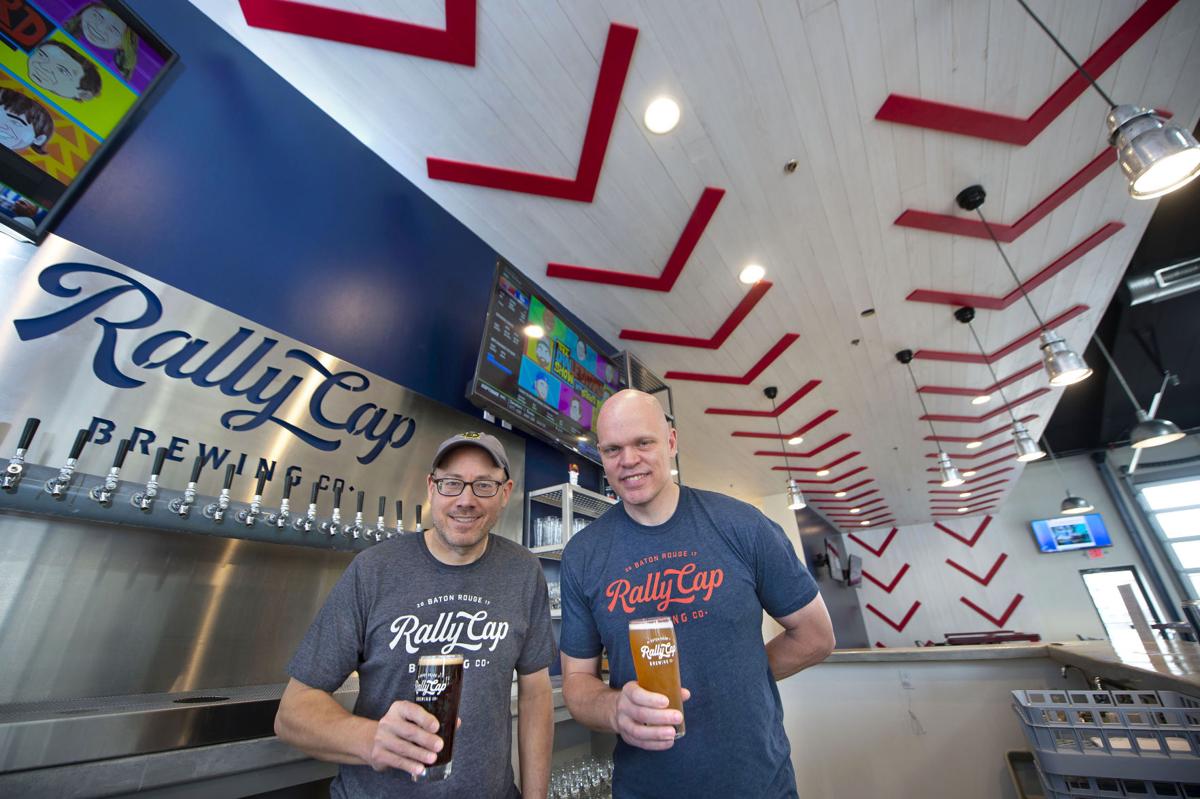 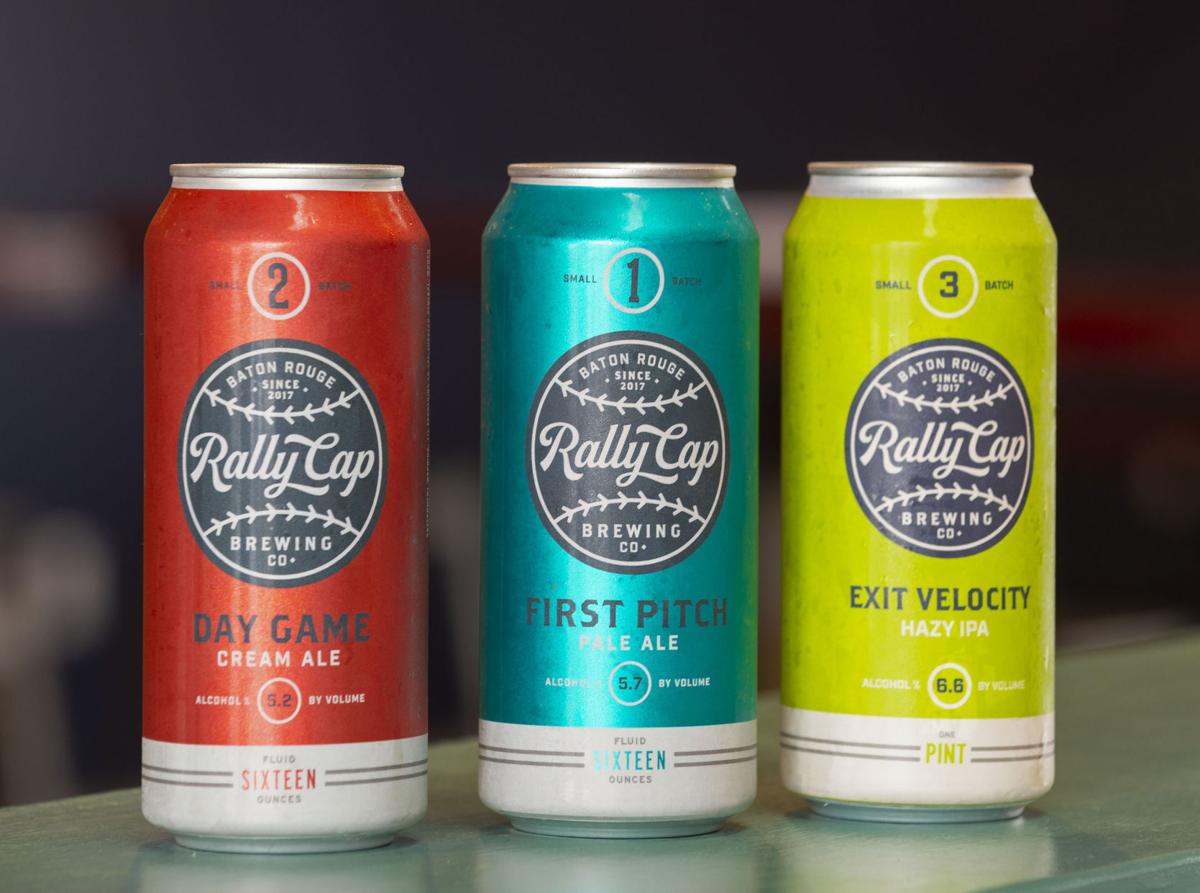 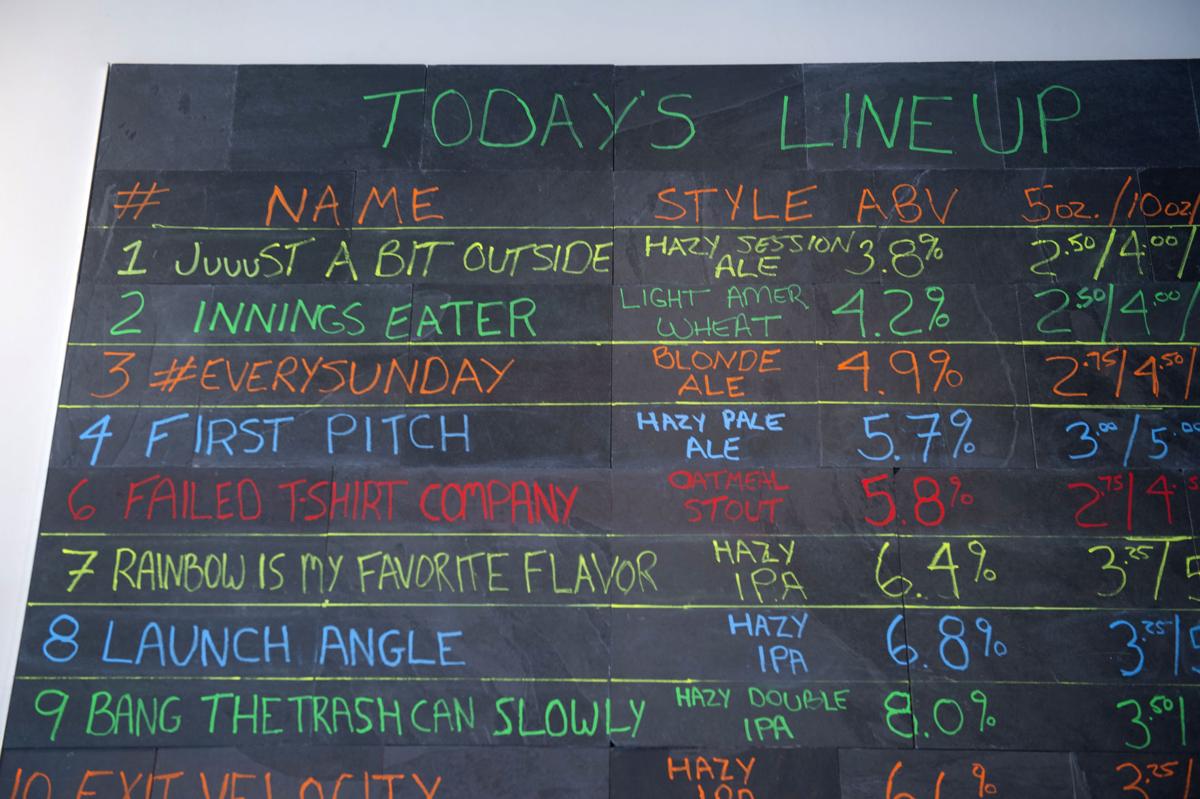 A chalkboard lists the offerings at Rally Cap, where co-owners Jeremy Brown and Kevin Whalen couldn't resist ribbing the Astros with an IPA called Bang the Trash Can Slowly. 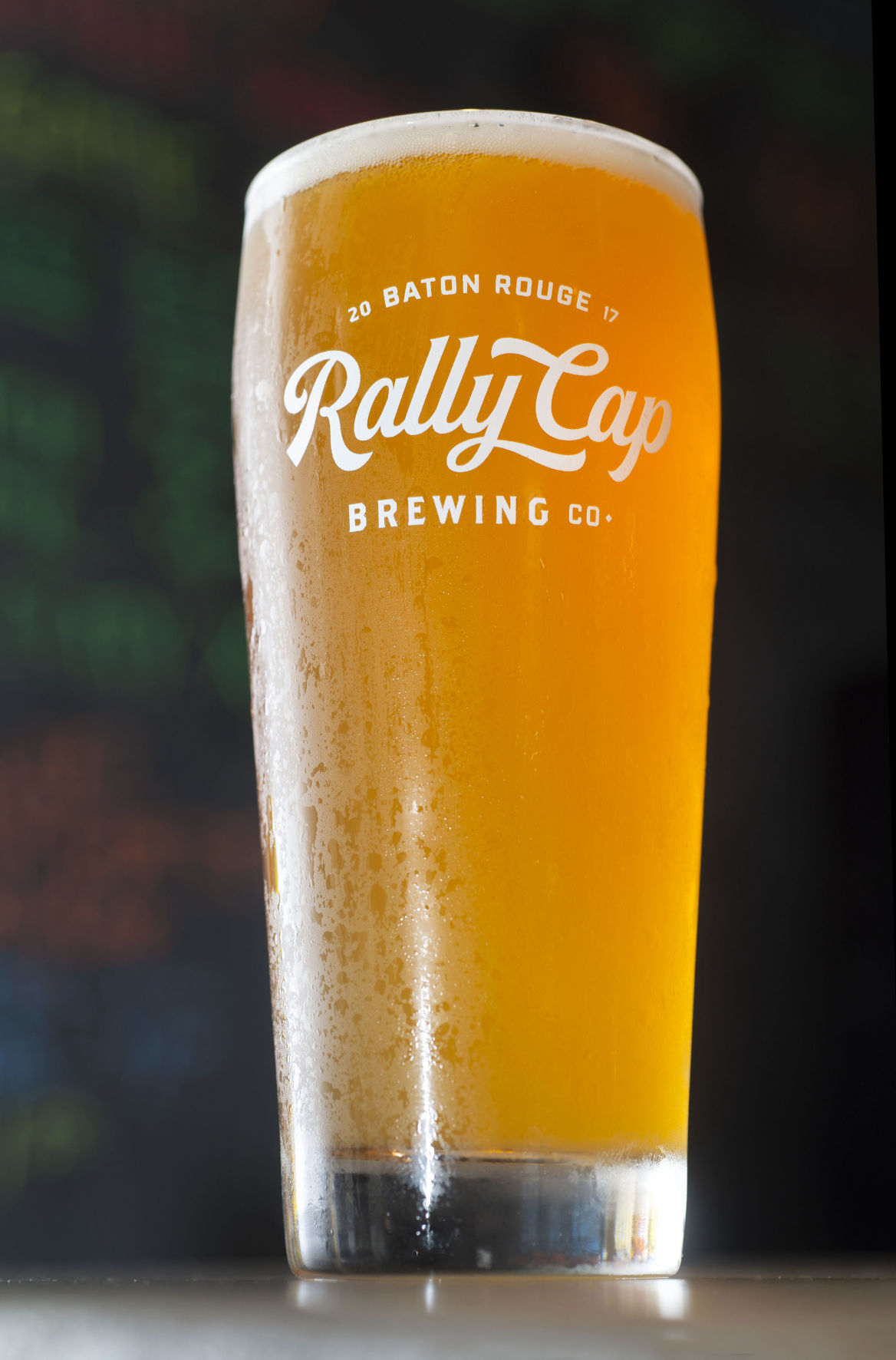 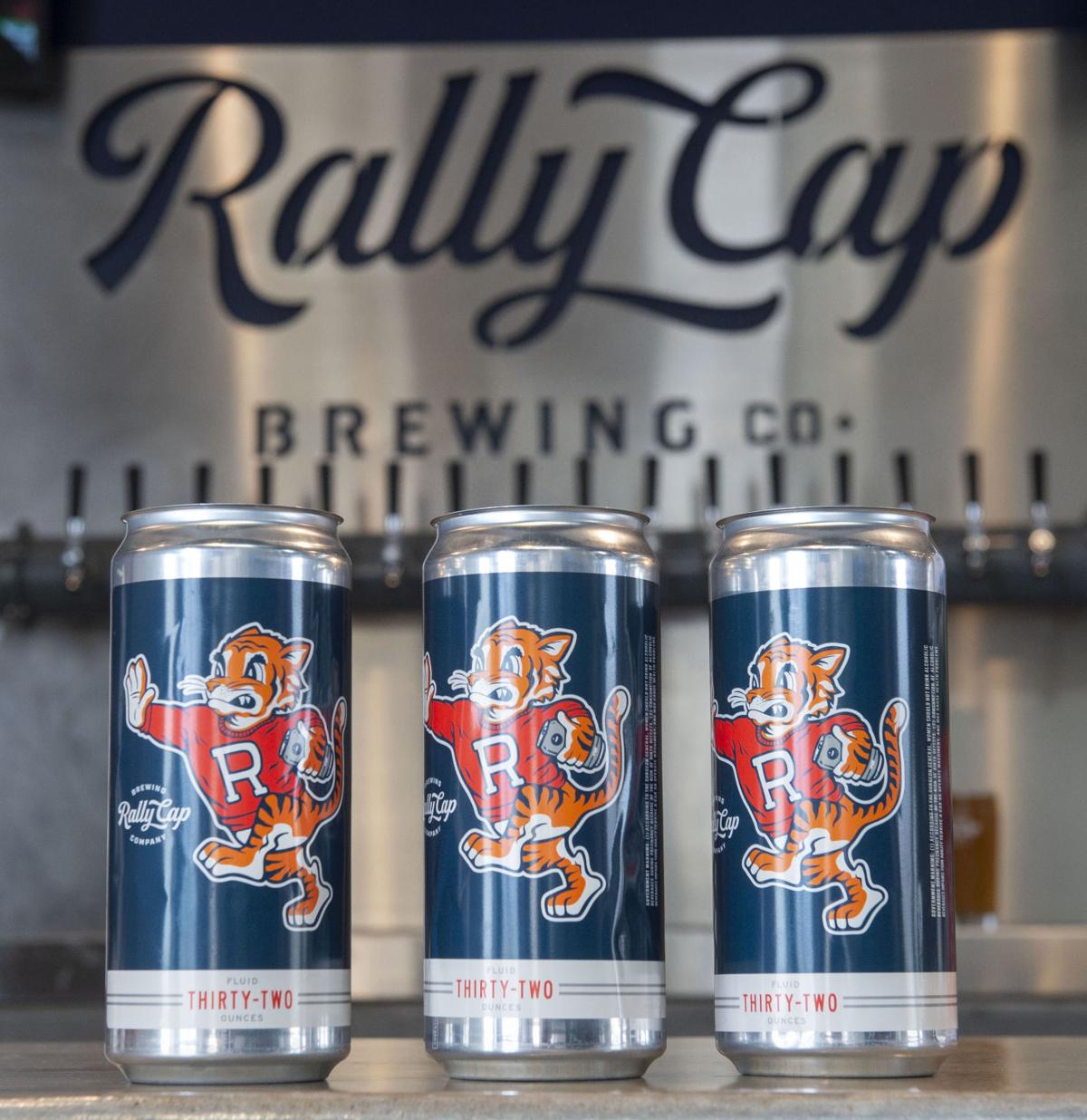 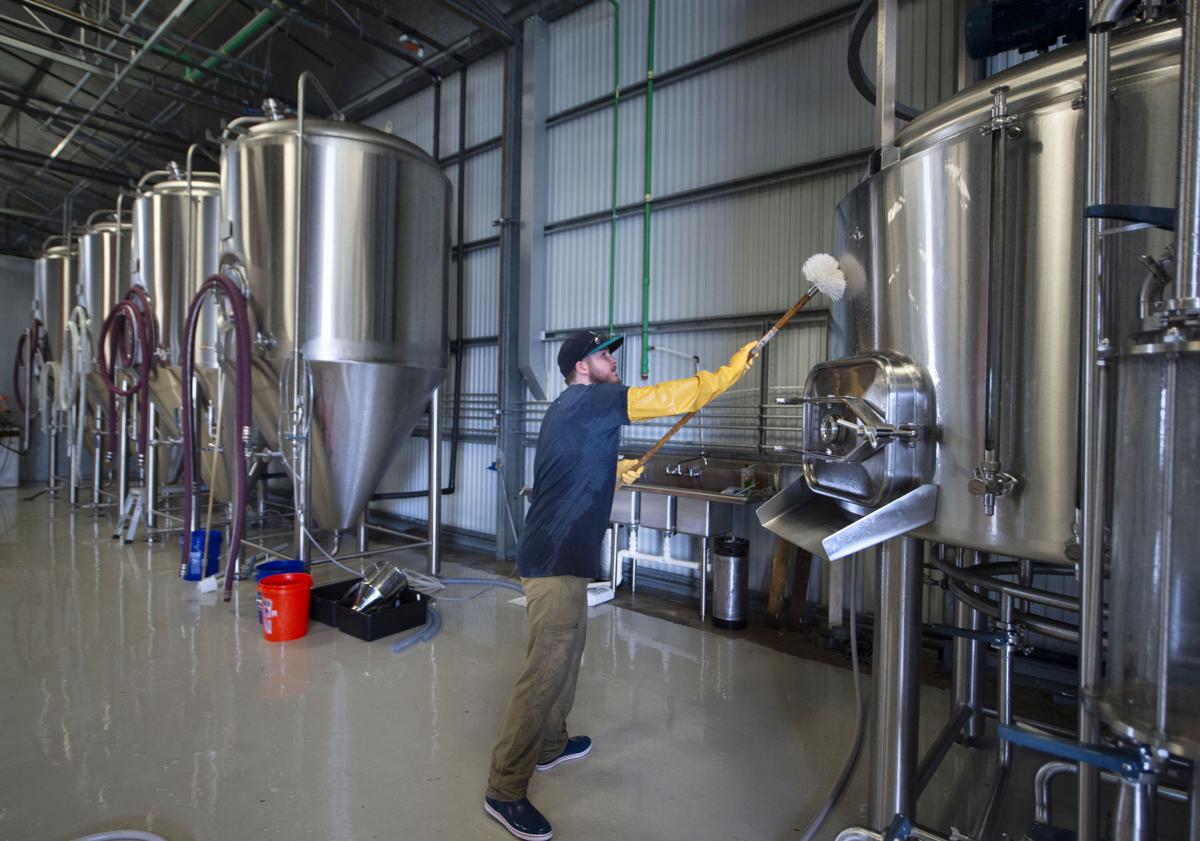 Brewer's assistant Shaun Spring cleans everything in the brew house in between batches of different beers, at Rally Cap Brewing Co. 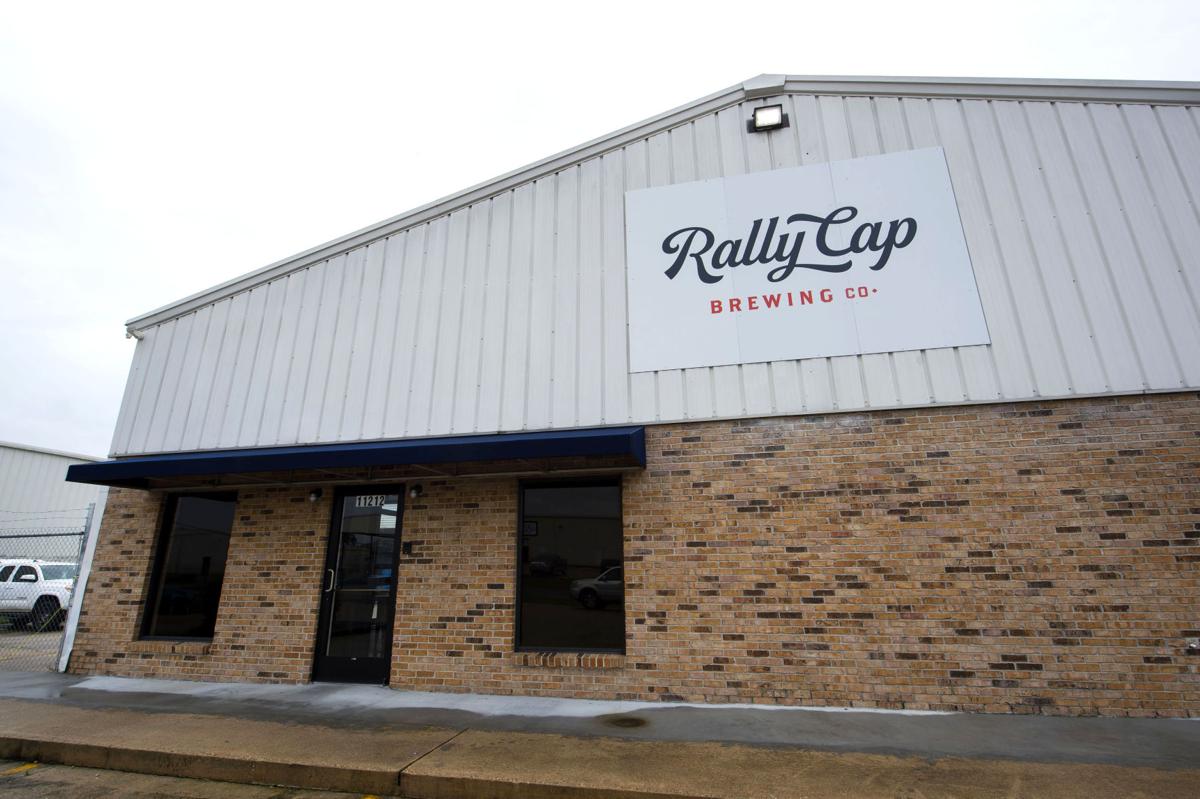 Baton Rouge's Rally Cap Brewing Co. open in December and is planning one heck of party when Major League Baseball gets going this year.

A chalkboard lists the offerings at Rally Cap, where co-owners Jeremy Brown and Kevin Whalen couldn't resist ribbing the Astros with an IPA called Bang the Trash Can Slowly.

Brewer's assistant Shaun Spring cleans everything in the brew house in between batches of different beers, at Rally Cap Brewing Co.

Baton Rouge's Rally Cap Brewing Co. open in December and is planning one heck of party when Major League Baseball gets going this year.

When Major League Baseball's opening day finally rolls around after the delays, Rally Cap owners Kevin Whalen and Jeremy Brown are hoping fans spend it at their new brewery/sports bar.

Rally Cap had scheduled a full lineup of events for the original MLB opening day on March 28, which has been postponed due to the coronavirus.

A new draft, the Sweet Science Cherry Stout, was added to the lineup on March 13 at the brewing company, 11212 Pennywood Ave., and on March 17, the Green Monster Mint Milkshake India pale ale, a nod to Fenway Park's left field wall and St. Patrick's Day, was introduced.

Like all restaurants in Baton Rouge, Rally Cap will not be serving anyone inside the restaurant in the near future, but will be offering to-go orders from noon to 8 p.m. seven days a week.

And, when have its services Just because the season is delayed, however, doesn't mean Rally Cap is shut out. While baseball is special, Rally Cap gives equal time to all other sports seasons and even hosts trivia nights.

Not bad for a brewery that's been open only a few weeks.

"This was my brainchild for the past six or seven years," Whalen said. "I started home brewing about 10 years ago, and I became fascinated with craft beer in general. I just started seeking out these beers and trying as many as I could, and I think I just stumbled on an article on home brewing. It fascinated me, and I wanted to learn more."

Whalen began doing research, which included pursuing the techniques of the country's top brewers. Then he dove in head first.

"Over time, I became completely obsessed by it and began to get every little bell and whistle to make it better," he said. "I got pretty good, and in my head, I started developing the thought that maybe this could be a business one day."

Whalen was working at L'Auberge Casino & Hotel at the time with Brown, who he met in business school at Duke University. Both wanted to put their business knowledge into something they could call their own.

"And so, I slowly put together a business plan, kept home brewing and kept doing research on business and equipment," Whalen said. "At one point, I decided to pull the trigger, and I talked to Jeremy about joining me in this venture and looking forward."

Whalen quit his job and signed a lease on the 10,000-square-foot Pennywood Avenue space and started making beer for a living.

"I'm probably a little behind Kevin as far as my love for craft beer," Brown said. "He got me into craft beer and trying craft beer, and from a brewing perspective, he's really the mastermind."

For Matt Saurage, good coffee comes with a good story.

More than a brewery

"I think you go into a lot of breweries, and they may not even have a TV," Whalen said. "They want you to enjoy the beer, but a lot of people like to go by themselves, and if you have a TV on, it keeps them there. So, we created the atmosphere of being like a neighborhood bar. We focus on hiring the right staff and creating a welcoming atmosphere that people like to hang out in."

As for the company's name, a rally cap is when teammates and fans turn their caps backward or inside out to try to rally their team to a come-from-behind win.

"I think Baton Rouge is a baseball town to some degree," Brown said "So, it seemed to make sense and fit. We'll cater to all sports."

When the MLB opening day celebration finally happens, plans are to feature local chef and "Food Network Star" alumnus Jay Ducote in a live radio broadcast and to have former LSU and Major League Baseball player Andy Rinaudo record his podcast there. Such ballpark favorites as hot dogs, nachos, popcorn and Cracker Jacks will be for sale.

"There will be Major League baseball games all day," Whalen said. "They'll start at noon, and they'll have games into the night. That's our national holiday, and we know some fans really treat it that way and we want an event to make this a gathering place."

Rally Cap also will release a special beer called In Between Hop for the occasion, created, as are all of Rally Cap's beers, through a detail-oriented procedure.

"Brewing is procedural, but it's also like a giant chemistry experiment," Whalen said. "Temperatures are important and obviously ingredients and being able to manipulate flavors. The thing I had to figure out, how to get certain flavors."

Kim Barton hadn't even finished eating her club sandwich before making plans for the next day's lunch with her coworkers.

All about the beer

Rally Cap started out selling Whalen's first beer, Hazy Bale Ale, that was almost four years in the making. It's now made through the company's 15-barrel system, meaning it can produce 30 kegs at a time.

"All we can sell is stuff that we brew," Brown said. "And we've got some beers on the lighter side for folks that are used to drinking lighter beers or traditional American lagers. And the rest is stuff that tends to sell, including our hoppy stuff, so we have two IPAs and double IPA and a blonde on tap."

"And they're all hazy beers, which is kind of a subsection of IPAs that are really popular," Whalen added. "They're very fruity, tropical fruit, citrus, and they're going over pretty well."

Rally Cap's most popular IPA is Bang the Trash Can Slowly.

"The name is an ode to the Astros' cheating scandal and a very famous Robert DeNiro baseball movie called 'Bang the Drum Slowly,' and it's a take off of that and the Astros banging on a trashcan," Whalen said. "It far outsells everything else right now."

"It's tropical fruity," Brown added. "It's an 8% beer, and it really hides the alcohol very well. It's an orange hazy luscious color."

The beer to be introduced on baseball's opening day will be lighter and crisper with less haze.

"It's what we term a San Diego-style IPA," Whalen said. "It's a little bit more bitter, closer to a traditional IPA. Those aren't made too much anymore around here, so we're reintroducing the style for the people that like the bitter beers. We call in the In Between Hop, because it's in between the west coast IPA and the hazy IPA."

Rally Cap is already expanding its brand with distribution in bars and restaurants in Baton Rouge and New Orleans. It will be offered in cans starting in April.

"We've got an opportunity to welcome people into the craft beer community here in Baton Rouge," Brown said. "And we want it to make sure we've got options for those folks that haven't necessarily tried it. And, it's fun."

Takeout in Baton Rouge: 5 dishes you might enjoy for March 23 dinner

Helping restaurants stay in business by ordering takeout? Count us in!