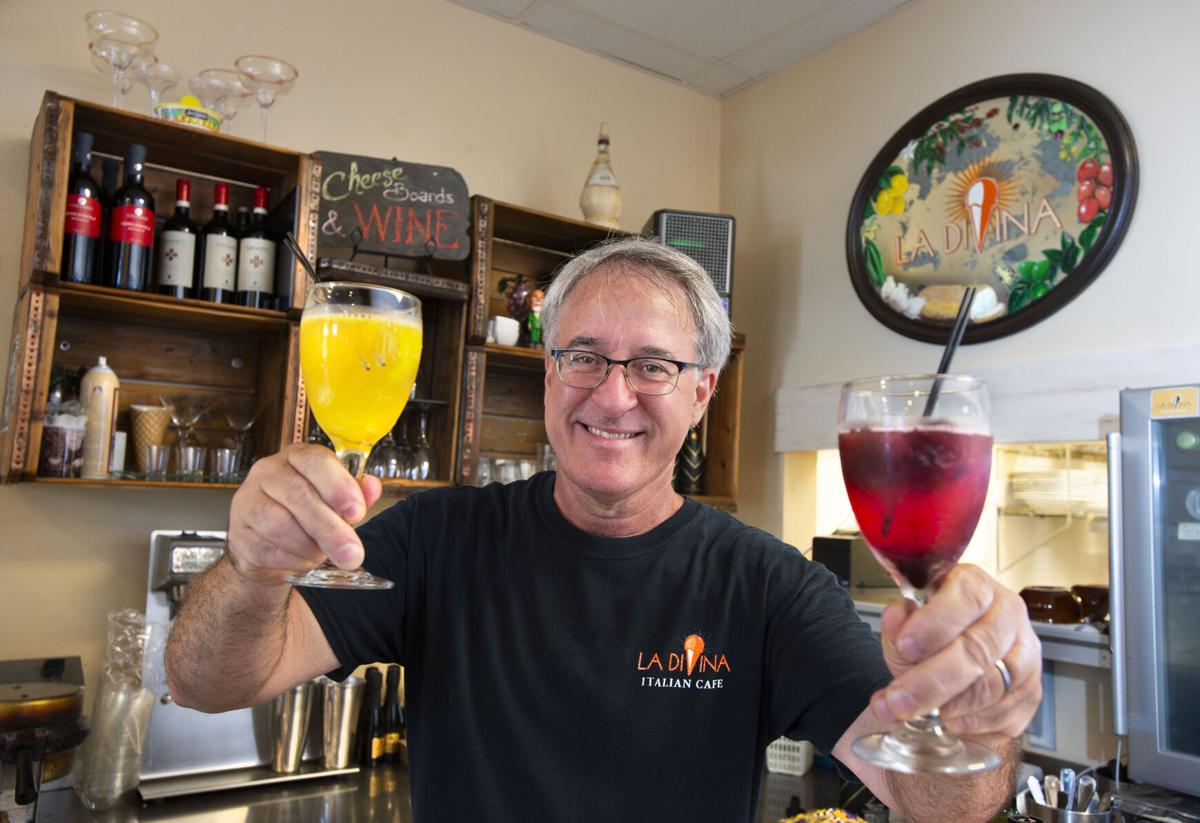 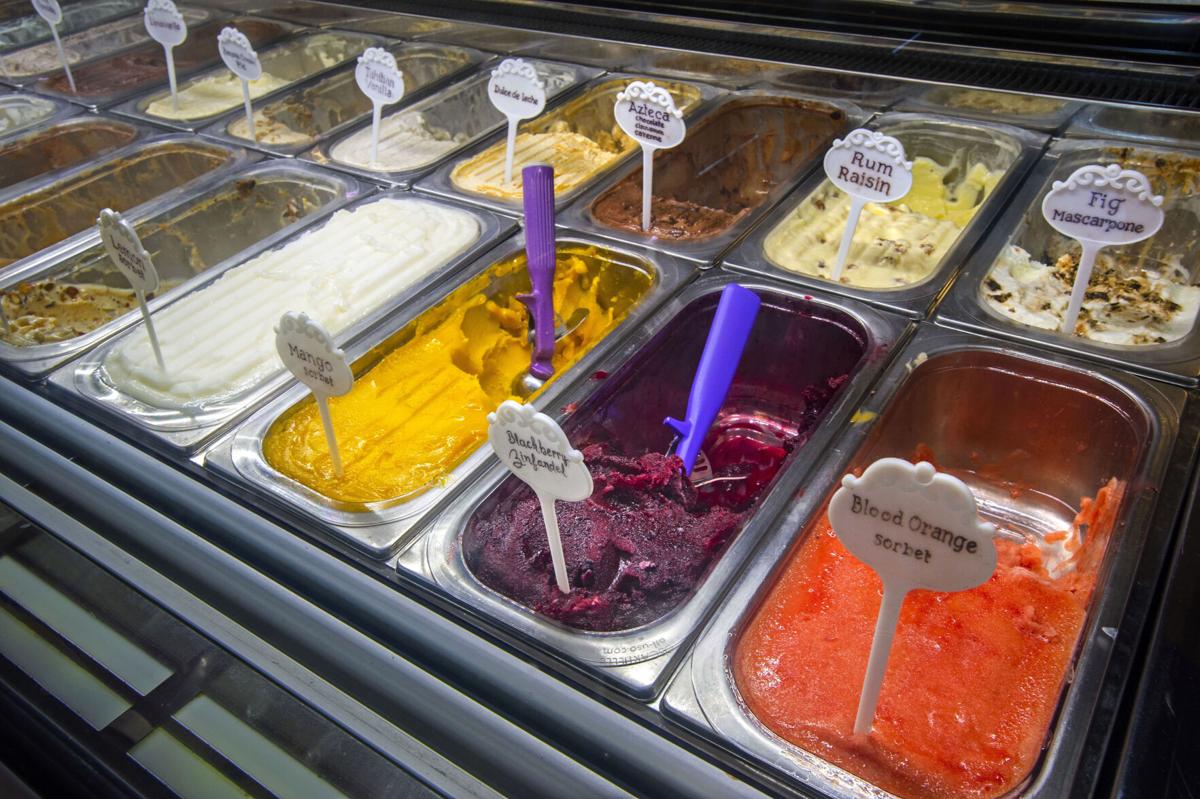 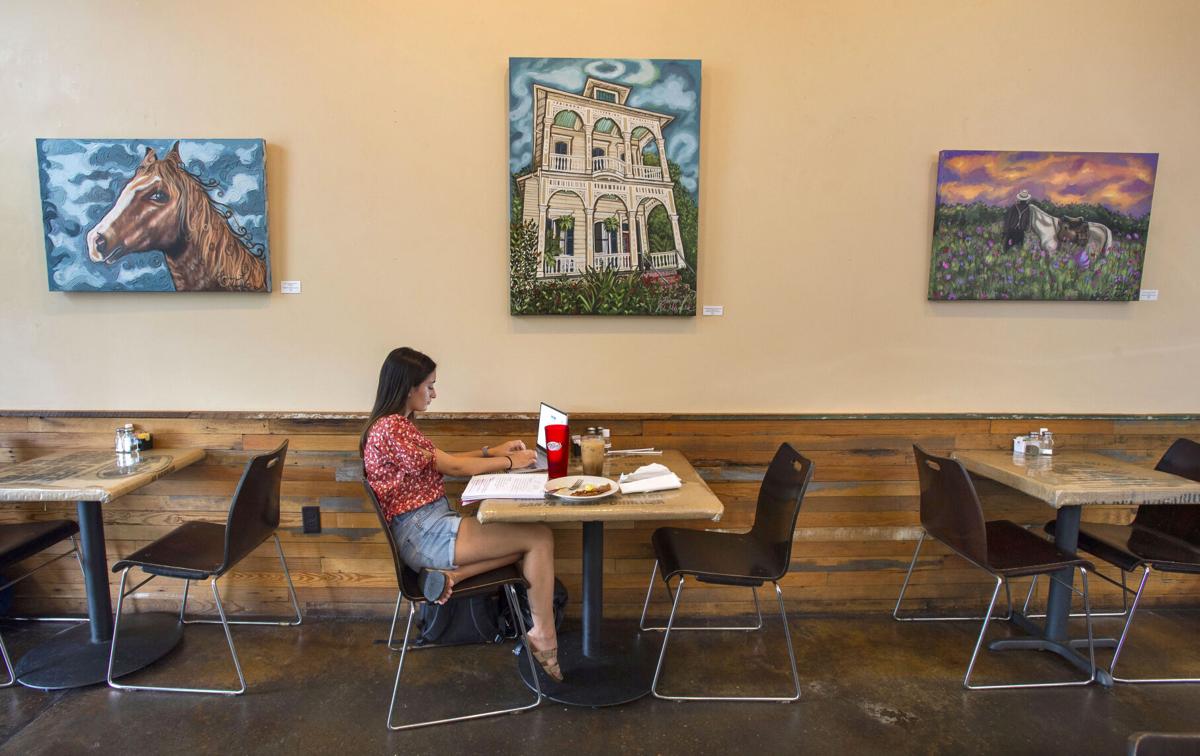 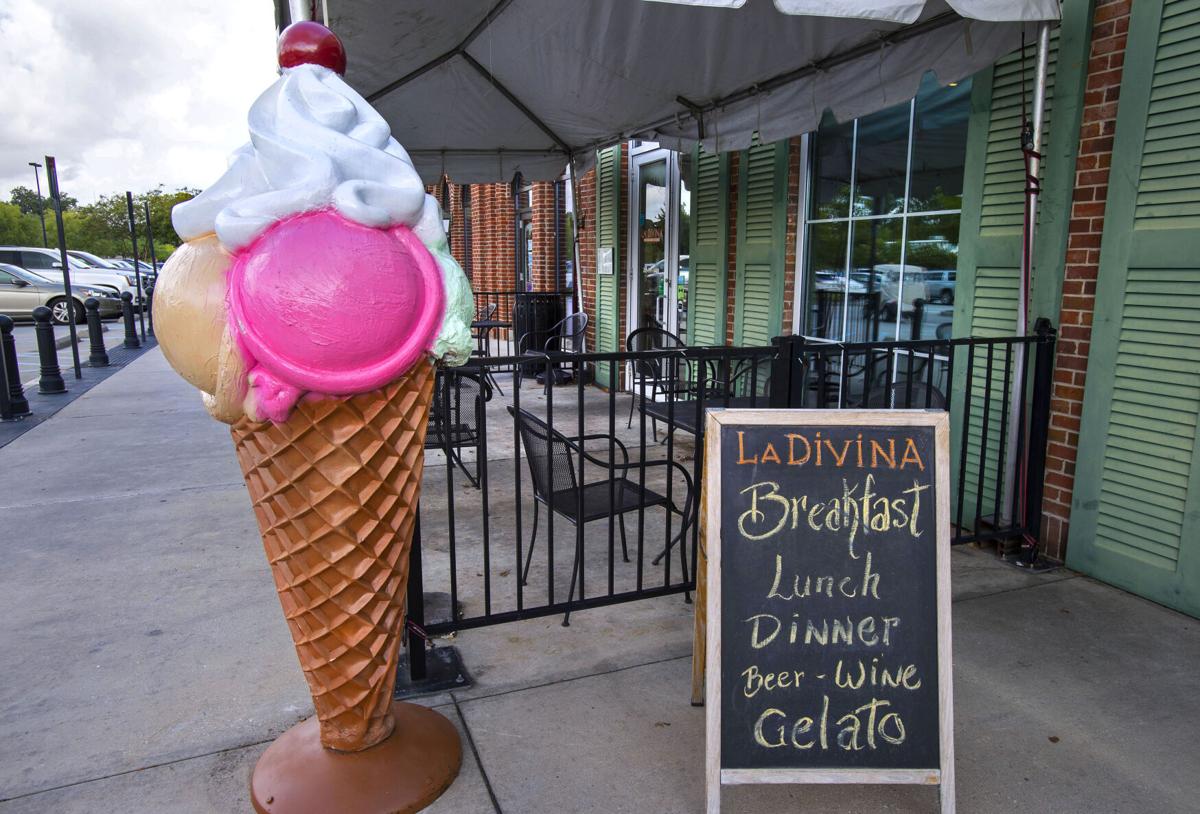 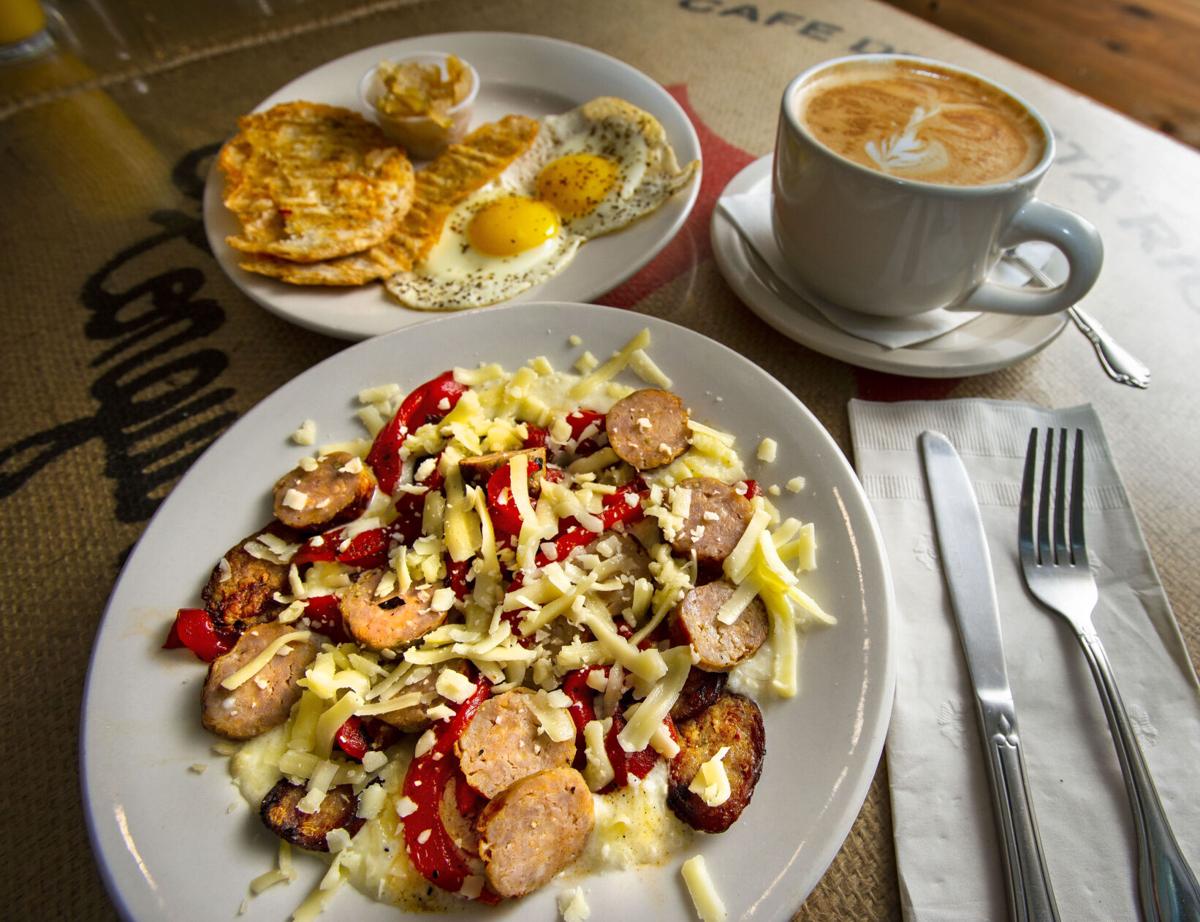 Italian Grits with roasted red peppers and Italian sausage topped with cheese and eggs, along with ciabatta toast and house-made apple jelly is on the breakfast menu at La Divina Italian Cafe. 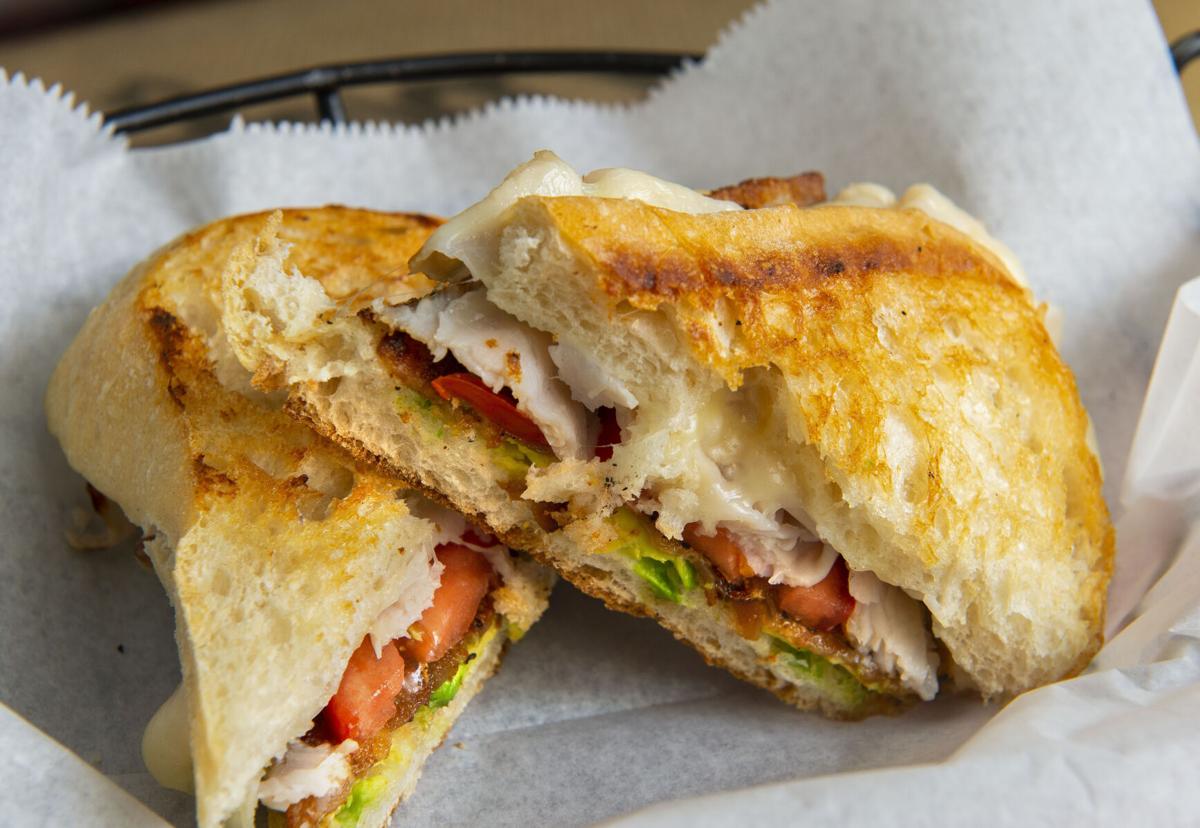 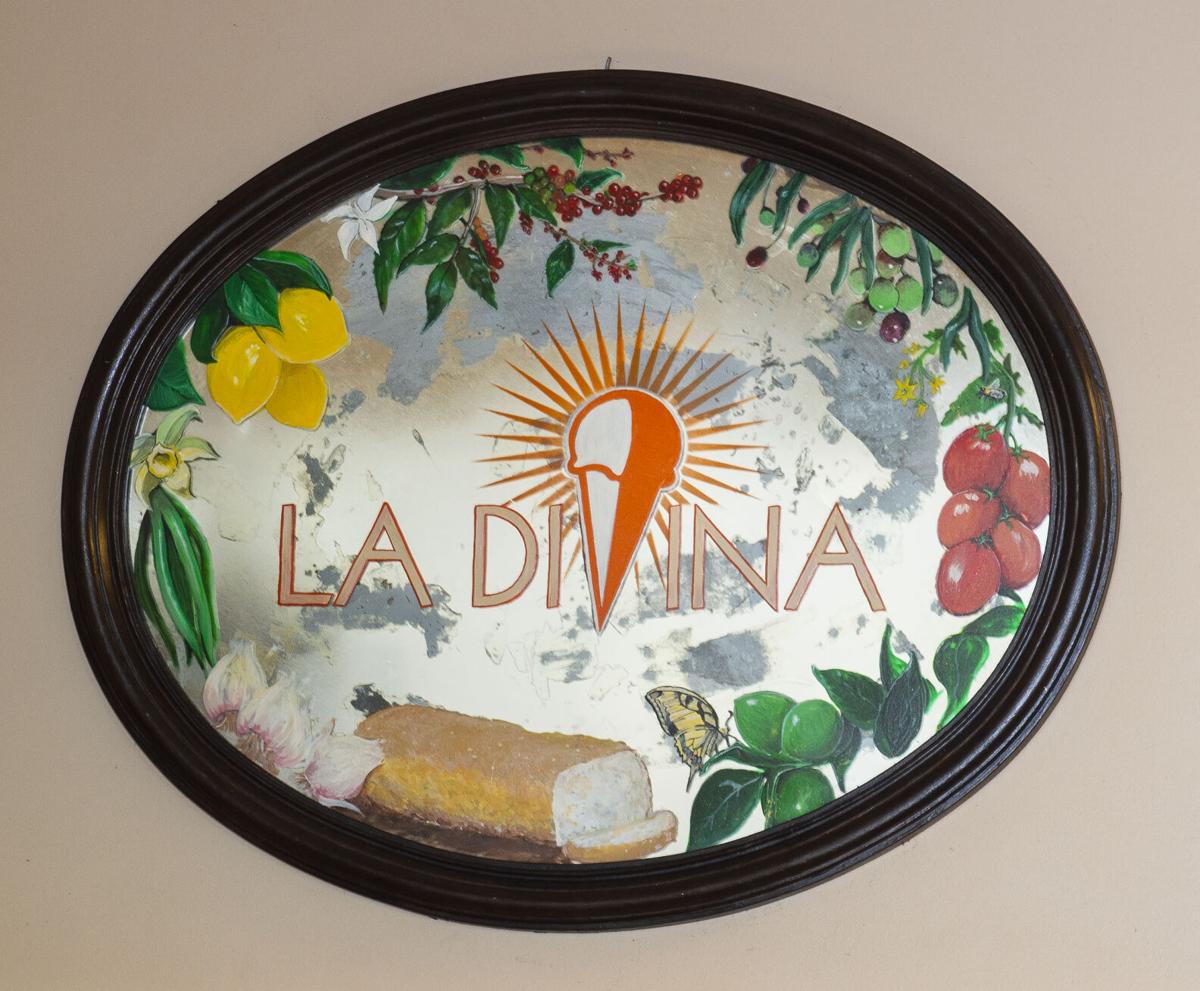 This sign over the counter greets customers to La Divina Italian Cafe.

Italian Grits with roasted red peppers and Italian sausage topped with cheese and eggs, along with ciabatta toast and house-made apple jelly is on the breakfast menu at La Divina Italian Cafe.

This sign over the counter greets customers to La Divina Italian Cafe.

La Divina Italian Cafe is mixing up delightful gelatos and sorbet mimosas, paninis and lasagna and serving them up with artwork and live music.

And the combination of food and fun seems to be paying off.

Like other eateries, the cafe at 3535 Perkins Road in Baton Rouge has had to overcome its share of challenges during the state's pandemic lockdown and reopening phases.

But sales were so good at La Divina during Phase 2 that August marked the restaurant's best month of business since it opened in 2013.

That's not to say it's been easy.

"Of all the things that affected us in the years we've had our business, this is, by far, the most challenging as it doesn't seem to ever end," said owner Lance LeBlanc. "I don't want to say it like we were unique. We were only experiencing what everyone else experienced. We find that predicting what tomorrow is going to bring us is really a roll of the dice, because you really don't know. You expect one thing, and we get something completely different. And that's not saying that it's either good or bad — the area has had adversities that you hate to think about, and we've really come out of it pretty well."

In the midst of it, the cafe resumed its series of live music, and will soon bring back its author and children's book readings along with performance art.

"And atmosphere is important," he said. "In some cases, to some people, it's even more important. We're trying to satisfy all corners of the business and be a place not only where we can support local artists but still maintain a good quality of service as far as food goes."

Helping create the restaurant's warm environment is the local artwork that fills the walls, enhancing its menu of such Italian favorites as lasagna, spaghetti and meatballs, stuffed portobello mushrooms and a list of paninis, including the popular Piazza.

"The Piazza is our turkey and cheddar panini, and it's our bestseller," LeBlanc said. "It's a smoked turkey panini with pancetta, avocado, tomato and provolone cheese."

Customers can order anything on the lunch menu from the time the cafe opens at 8 a.m. to when it closes, which is 7 p.m. Sunday through Wednesday and 9 p.m. Thursday through Saturday. Hours will revert to the daily 7 a.m. to 9 p.m. once post-pandemic regulations normalcy returns.

There's also a breakfast menu served from 8 a.m. to 11 a.m. Tuesday through Thursday and to noon Friday through Sunday. It includes everything from a classic breakfast of eggs, bacon and toast to the frittata omelet of baked eggs with a choice of meat and vegetables to the cafe's best selling Italian grits.

"The Italian grits are grits with Italian sausage, roasted red peppers, Asiago and fontina cheese," LeBlanc said. "It's served with two eggs and ciabatta toast. Most people ask for the eggs to be served on top of the grits so they can mix it together."

LeBlanc had a hand in creating most of the recipes, some of which were developed when La Divina opened in 2007 on Magazine Street in New Orleans, with a focus on gelato, coffee and espresso.

"It was the goal that my business partner at the time and I were going to be wholesaling a lot of the gelato there," LeBlanc said. "My partner also had a fulltime job on the side as a professor at Tulane, so it was too many balls for him to juggle. So, he offered to close the retail store there."

The former partners also had opened a La Divina location in the French Quarter, which also has closed. Then LeBlanc, partner with his wife Mary LeBlanc, brought his operation to Baton Rouge in 2013.

"We opened up roughly the same time Trader Joe's opened in the same shopping center," LeBlanc said. "We sought to be a quality gelateria, which is what we were originally on Magazine Street, and then we just enhanced that with a full-rounded menu of food from breakfast to dinner, so we came in with a different menu aside from the gelato. We incorporated the alcohol, as well. What we were hoping to do is to have something that could sustain us from 7 o'clock in the morning to 9 o'clock at night."

LeBlanc brought some menu items from his New Orleans store and teamed up with his chef to create others unique to the Baton Rouge location.

"Over the course of the seven years we've been here, we've listened to customer requests, and we've kind of evolved," he said. "We've also incorporated other dishes brought on by our chef Eric Lefort, and we've had daily special like muffulettas, which we're talking about bringing back in the fall."

Like the menu, La Divina's artistic leaning developed over the years.

First came the local artwork on the walls.

"Prior to COVID, when things were under our normal arrangement, we were changing out the local artwork every two months," LeBlanc said. "Sometimes I'd seek them out, and sometimes they'd approach me."

The live music evolved like the menu did, LeBlanc said.

"We started doing children's events with book readings and spoken word performances," he said. "Local authors come in on random days, when we would book events, then we moved to local music performances, where musicians perform original music."

Fat Boy's Pizza now serving up 30-inch pies in Baton Rouge and a challenge that could win you $2,500

Before coronavirus regulations set limits on the number of customers, the performers would settle into a corner spot. Now musicians perform outside the front doors two or three nights a week with customers seated at socially distanced tables

"It's been a bit of a stretch to do it, but it's been rewarding, because many of the customers who come in are following that particular artist," LeBlanc said. "There are also customers who are introduced to new artists."

To say Mason's Grill is a family restaurant is a bit of an understatement.