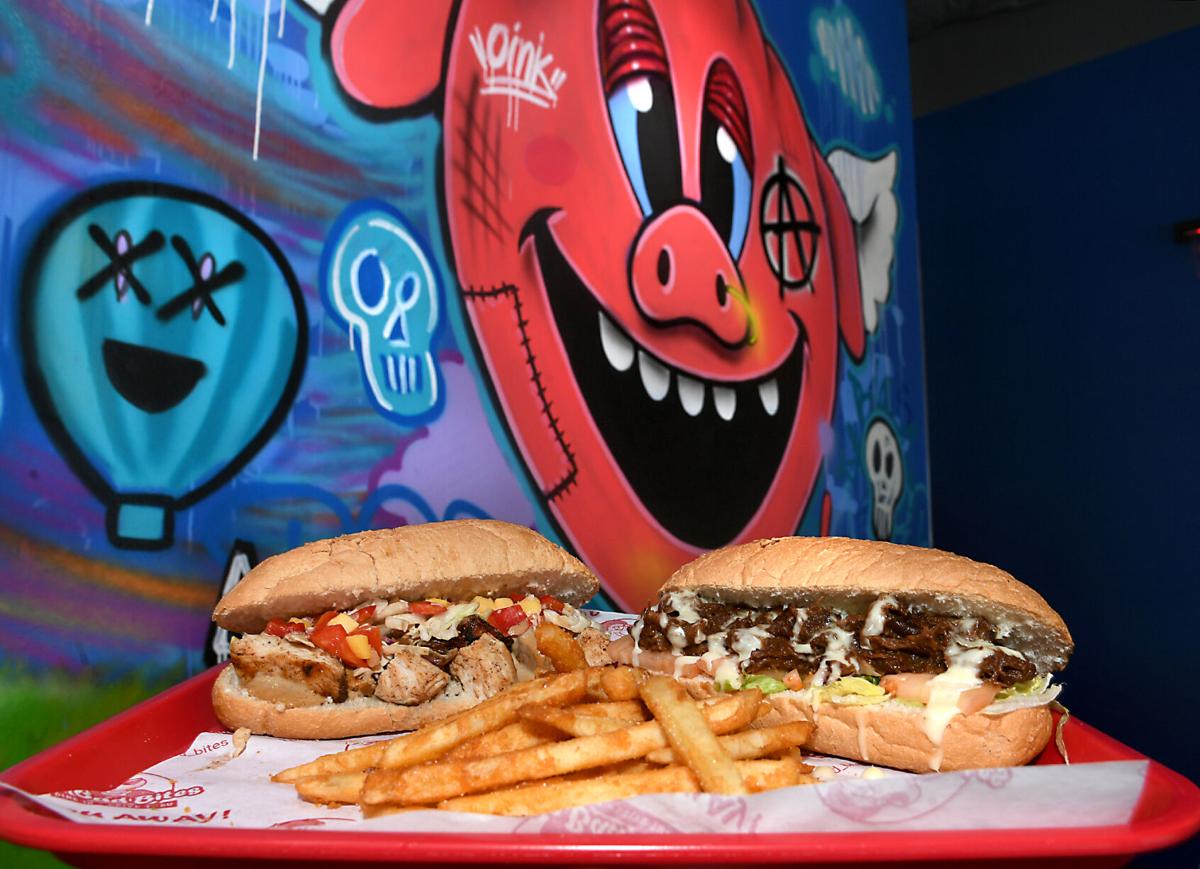 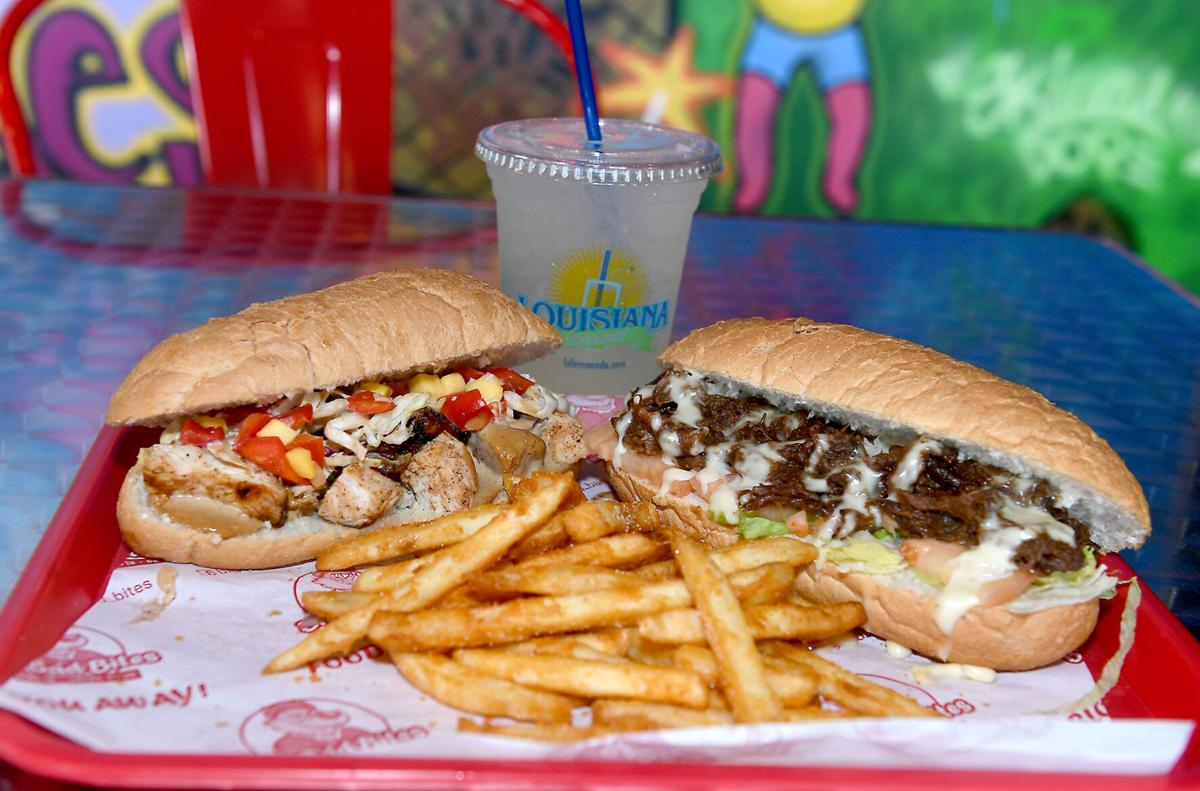 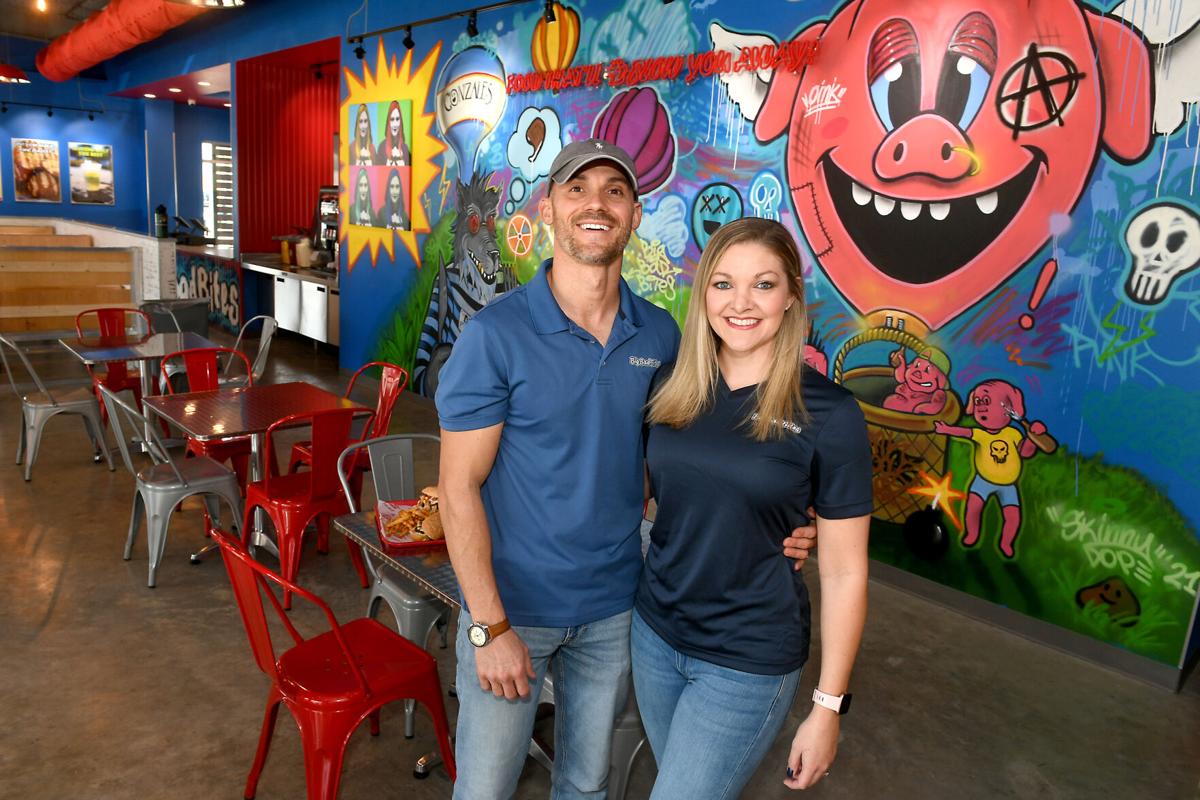 Cory and Kaitlin Hebert opened Big Bad Bites in Gonzales with a focus on premium sandwiches, po-boys and burgers. 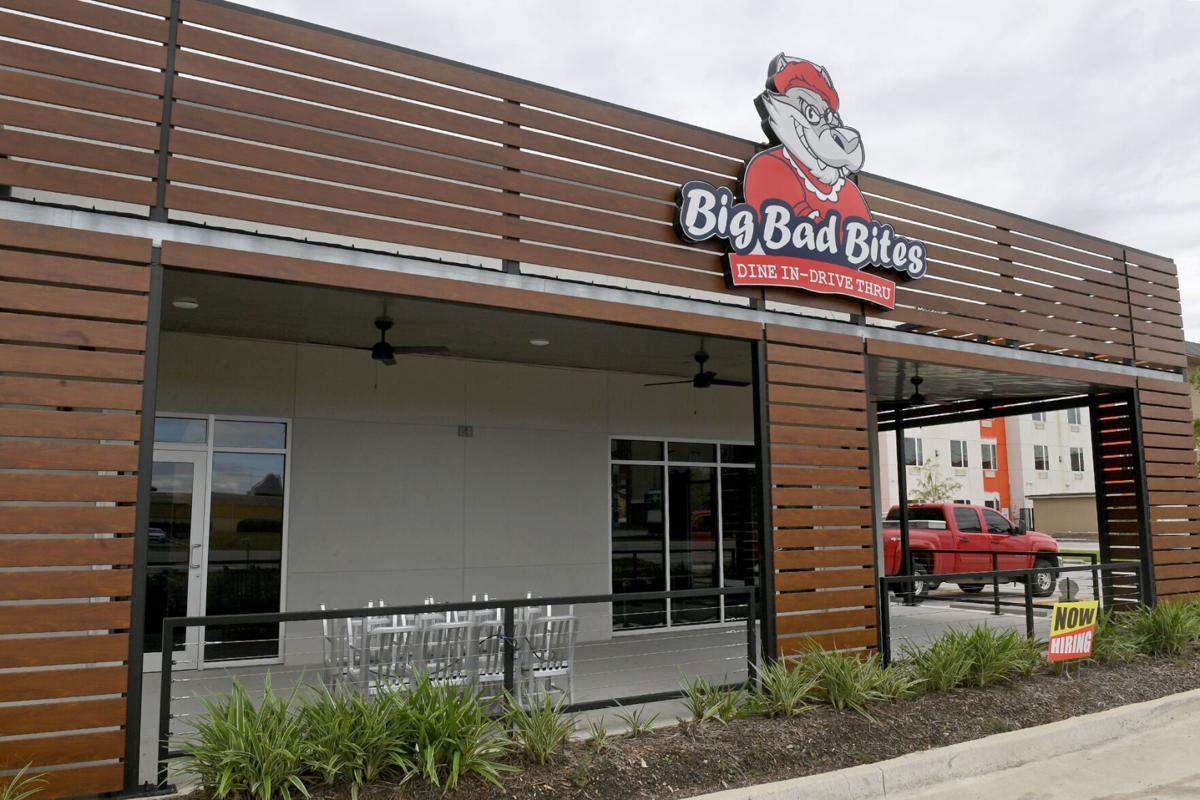 After years in the making, Cory and Kaitlin Hebert opened Big Bad Bites on Nov. 1 across from the entrance to Tanger Outlets in Gonzales. 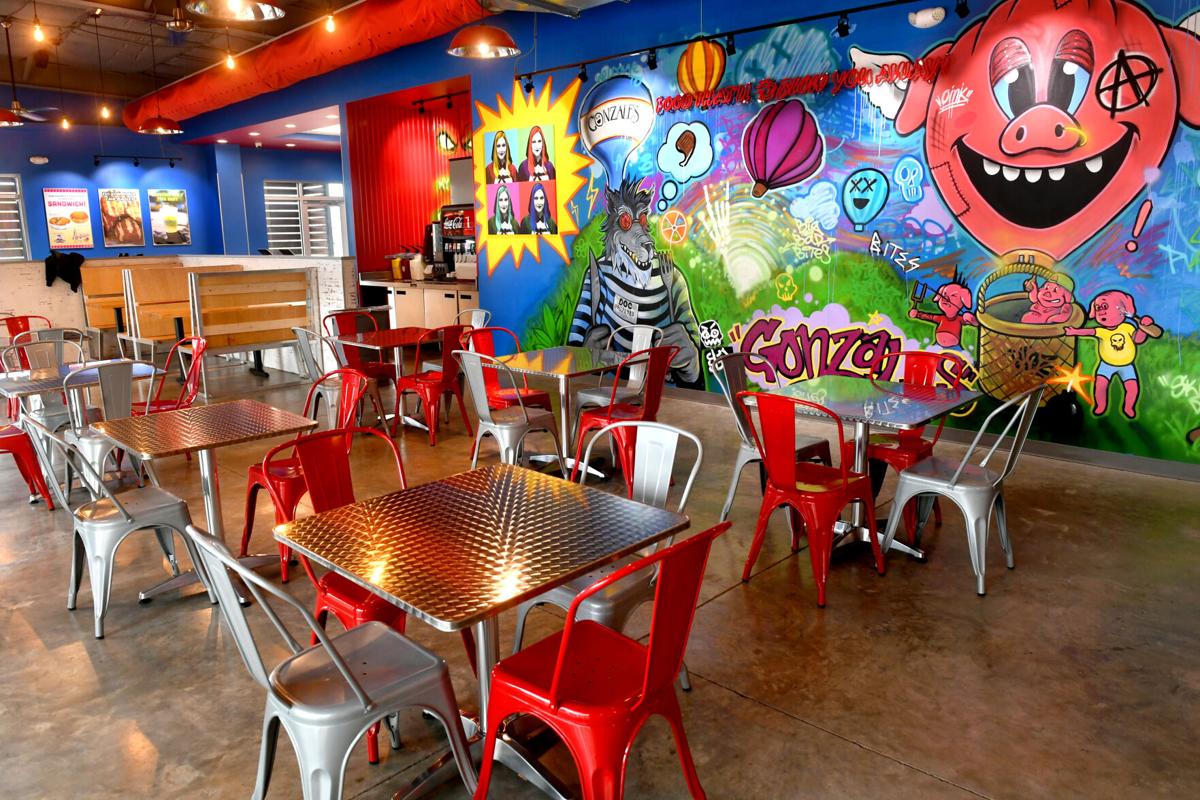 Vibrant pop art covers the wall in the dining room at Big Bad Bites in Gonzales. 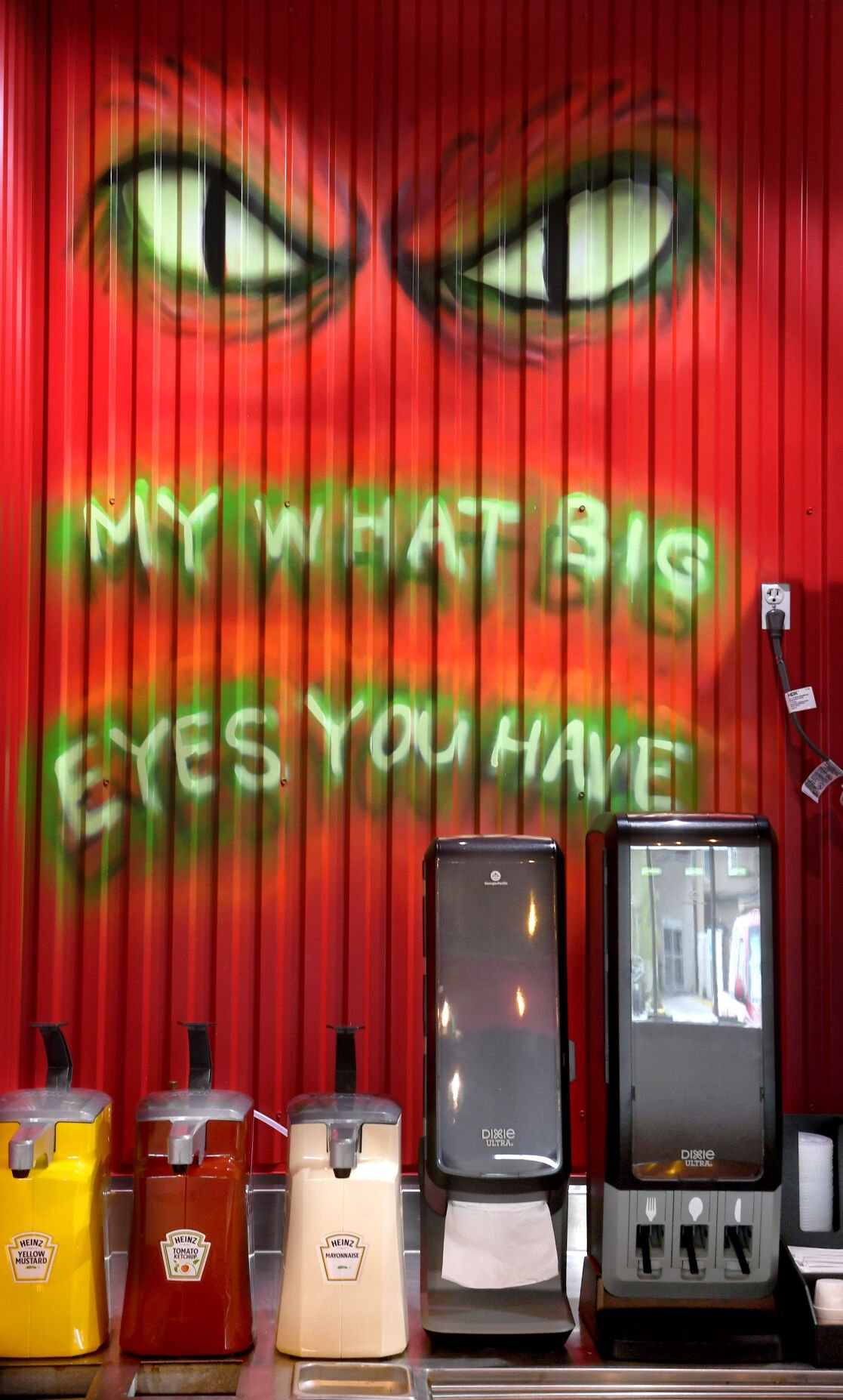 A mural adds a touch of humor to the condiment area at Big Bad Bites. 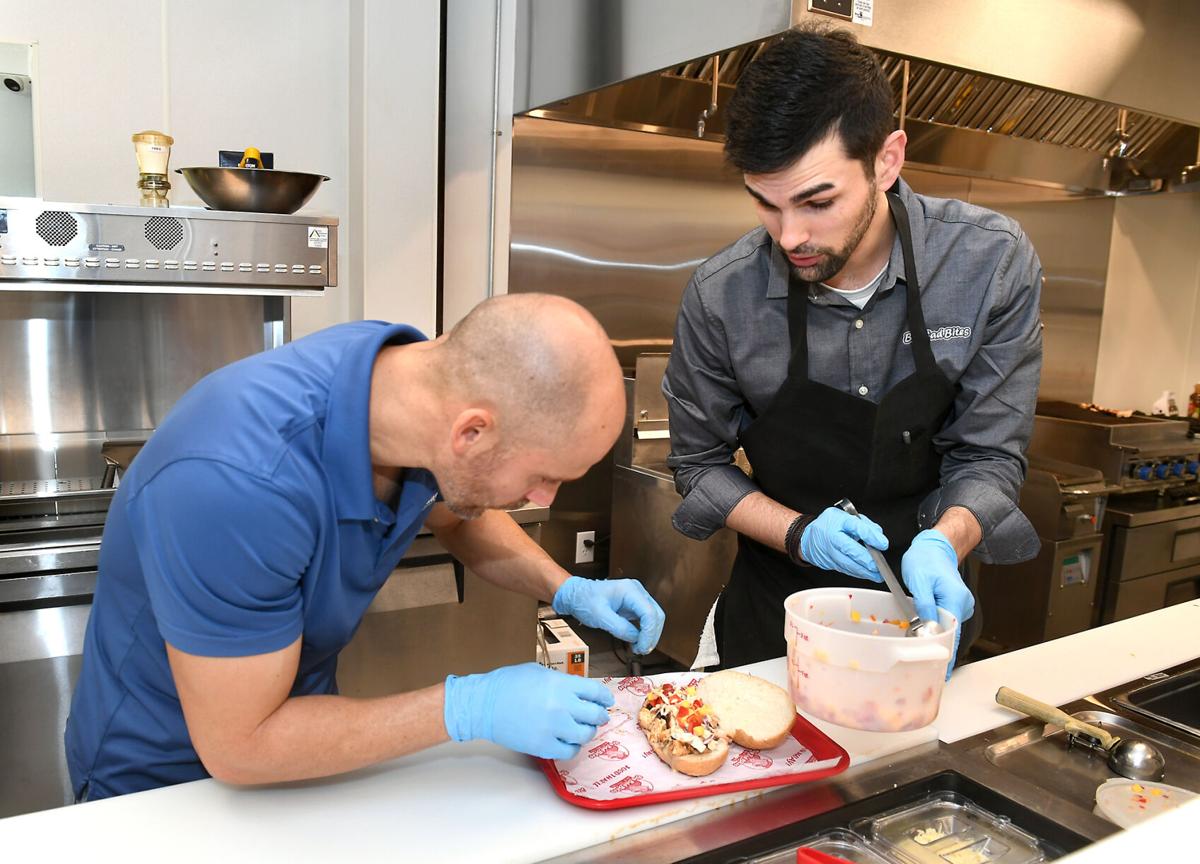 After years in the making, Cory and Kaitlin Hebert opened Big Bad Bites on Nov. 1 across from the entrance to Tanger Outlets in Gonzales.

Vibrant pop art covers the wall in the dining room at Big Bad Bites in Gonzales.

The one-two punch of the pandemic and Hurricane Ida could not stop Cory and Kaitlin Hebert from opening Big Bad Bites.

On Nov. 1, the couple finally began serving from the new restaurant at 2705 W. La. 30, across from the entrance to Tanger Outlets in Gonzales.

The homegrown shop focuses on specialty sandwiches made fresh.

But the road to opening day was a long one.

Originally, the Heberts planned for Big Bad Bites to be up and running in early summer, but supply problems caused by the coronavirus pandemic pushed opening day to late summer.

But the couple kept pushing forward, finally bringing to life the concept developed after six years of running their food truck, Rouge-A-Roux's, named as a play on rougarou (werewolf). Big Bad Bites nods to that heritage with a smiling werewolf in the logo.

Now customers are ordering such menu favorites as the Louisiana Crab Cake sandwich, the Howler po-boy and hamburgers made popular by Rouge-A-Roux.

"The way I describe it is it's all sandwich-based," Cory Hebert said. "It's all the same foods from the truck, but I just added a few other things, and we put our own twist on everything. And the whole purpose of what we're doing here is just to try to serve a high-quality product."

That includes beef from 44 Farms in Texas, which supplies steaks to high-end area steakhouses. This beef is the base for the restaurant's Howler, which combines chuck roast, lettuce, tomato and the restaurant's own pepper jack queso on a 8-inch Gambino's French bread bun.

The beef also goes into the burger, which can be doubled, and is served with all the fixings on a brioche bun.

Big Bad Bites' only seafood offering is its crab cake sandwich, slathered with Louisiana tartar sauce and served on a brioche bun.

Orders are placed at the front counter and eaten in the dining room or can be ordered at the drive-thru window.

"In the truck, when you ordered, you hit the back window and had your food in three, four minutes," Hebert said. "So that's kind of what we're going for here. You order, wait, and in a couple minutes, you get your food."

The location attracted Hebert because of its easy access to Interstate 10 and its proximity to the many stores at Tanger and area hotels.

When Bistro Byronz moved a few blocks, the longtime Mid City eatery brought everything with it. Then upped its game.

Despite the long haul to opening, the Heberts never gave up, likening the journey to the start of the food truck. Cory Hebert never worked in the restaurant industry before purchasing the Rouge-A-Roux truck.

"I was in automotive work, and I kept hearing guys talk about the food truck business, so I thought I'd give it a shot," he said. "It gave me an opportunity to become self-employed, and the truck is really where I learned the food businesses, where I learned to build the labor model."

Hebert started out serving plate lunches on the food truck then rebranded the business and introduced the specialty sandwich concept with an eye on top ingredients while providing quick customer service.

"I just kept doing things until I had a menu that stuck generally across the board," he said. "I was designing things like my hamburger, for instance. It's a hamburger, but I made the sauce for it. And I'm not the only person making pulled pork sandwiches, but I make the Caribbean slaw for it. That's how we do things differently. So it's recognizable food with our twist on it."

He's worked with City Gelato owner Mario Lozanov to create a gelato sandwich for dessert, and he serves locally produced Louisiana Lemonade. Hebert also has created his own house seasoning for his chili and chili cheese fries.

The Heberts put a lot of focus on service.

"It's a service-oriented company, and I want to have employees that really enjoy their jobs," he said. "I had worked for other people in my life, and that's a big thing for me now that I'm employing other people. I want people to like working here, and I want to maintain consistency of our products for our customers."

The truck is parked for now, but plans are to put it back on the road in the future.

"We're just focusing on getting the restaurant running for now," Hebert said. "It's been a long time coming."

It didn't take long for the new Proverbial Wine Bistro to become a hit.