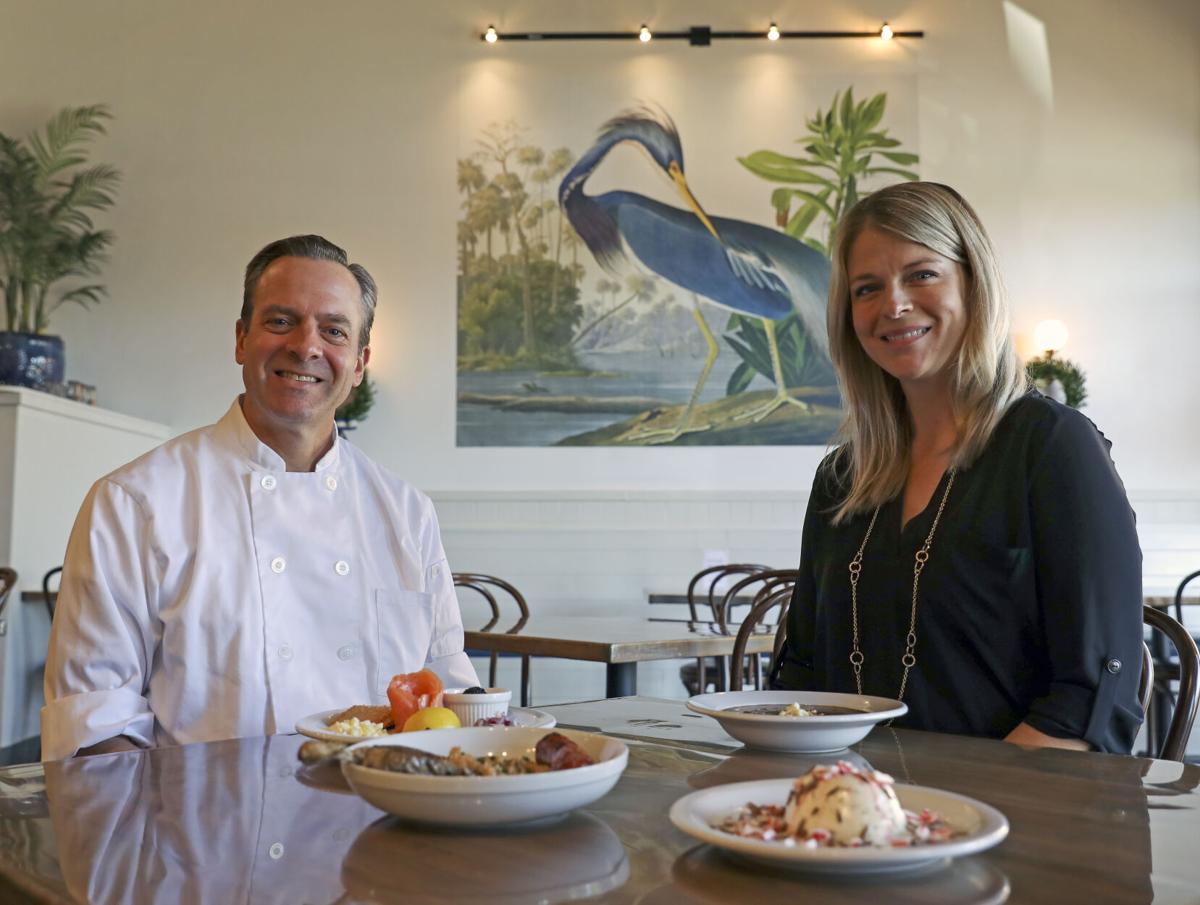 At Eliza Restaurant & Bar, owners Russell and Sally Davis serve Creole dishes — all made in-house from locally-sourced foods — with a contemporary spin. 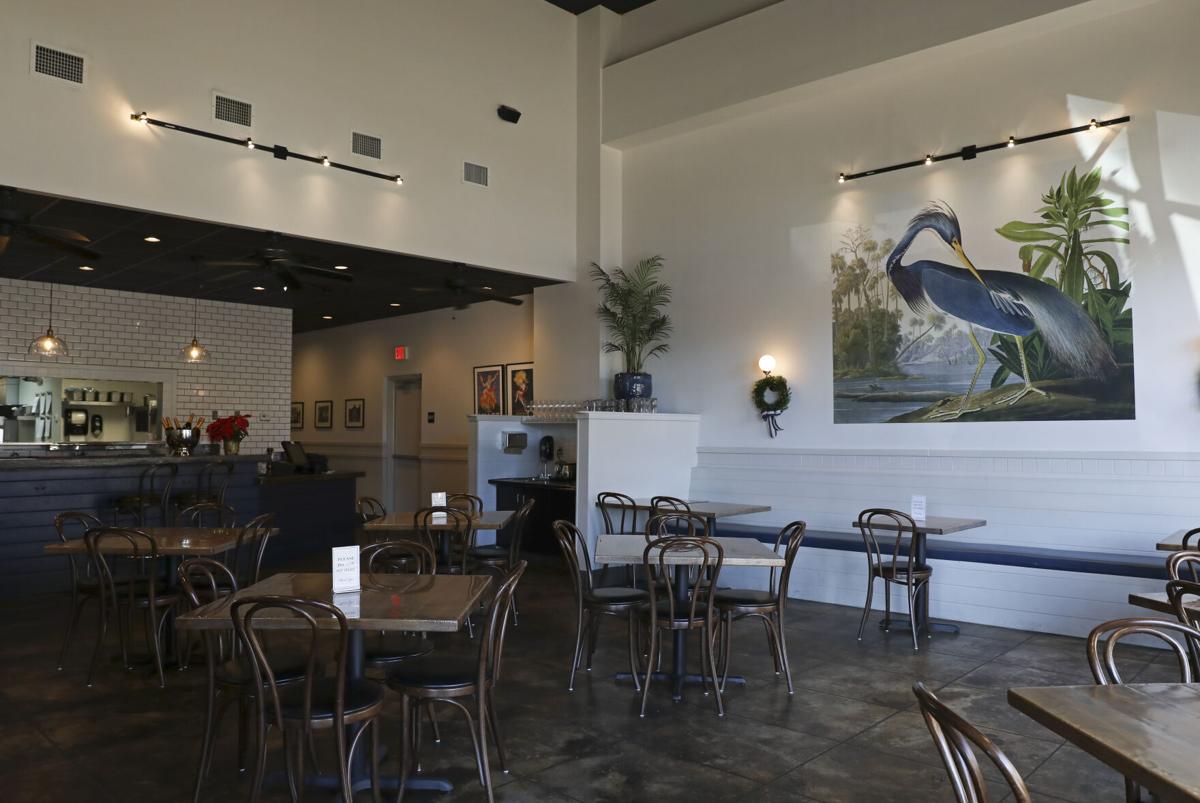 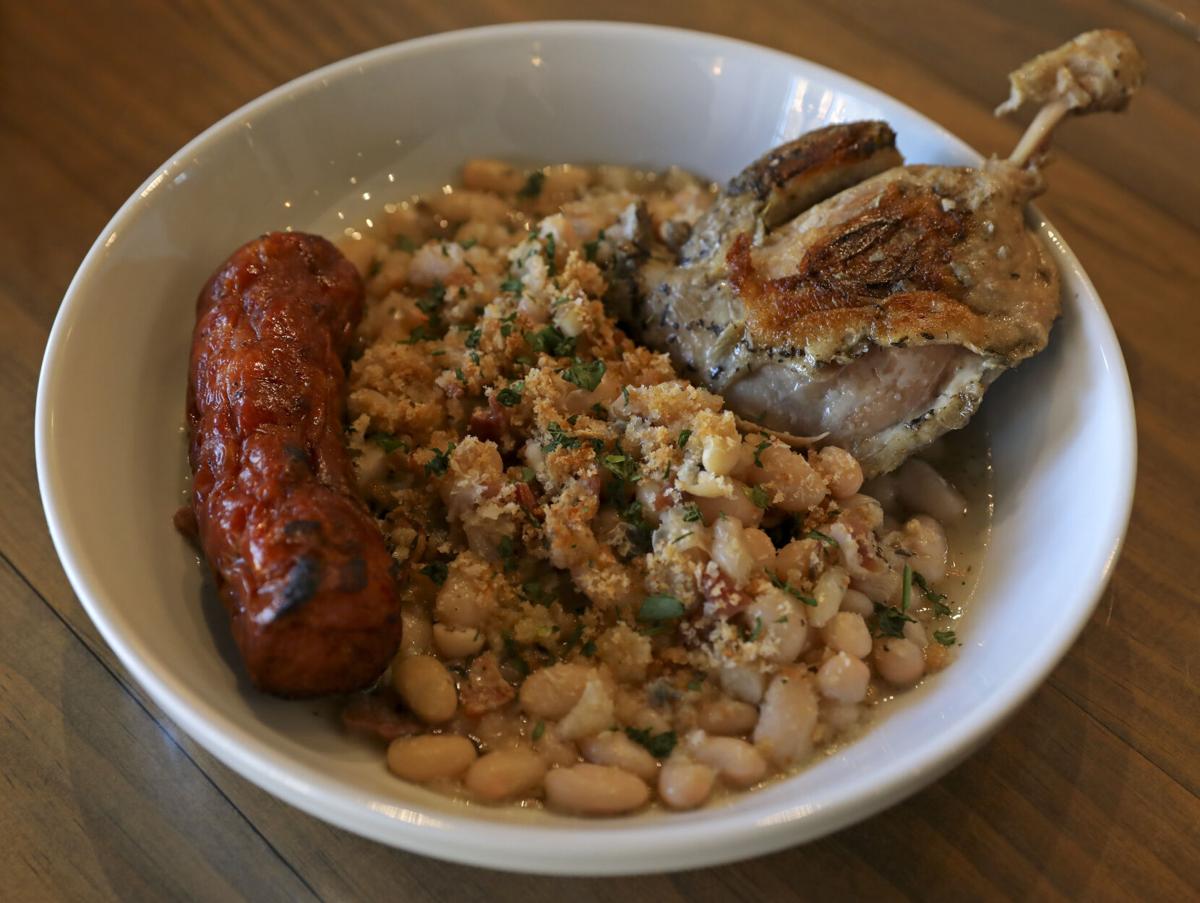 Duck confit cassoulet with andouille sausage is one of the entrées choices on the réveillon menu at Eliza Restaurant & Bar. 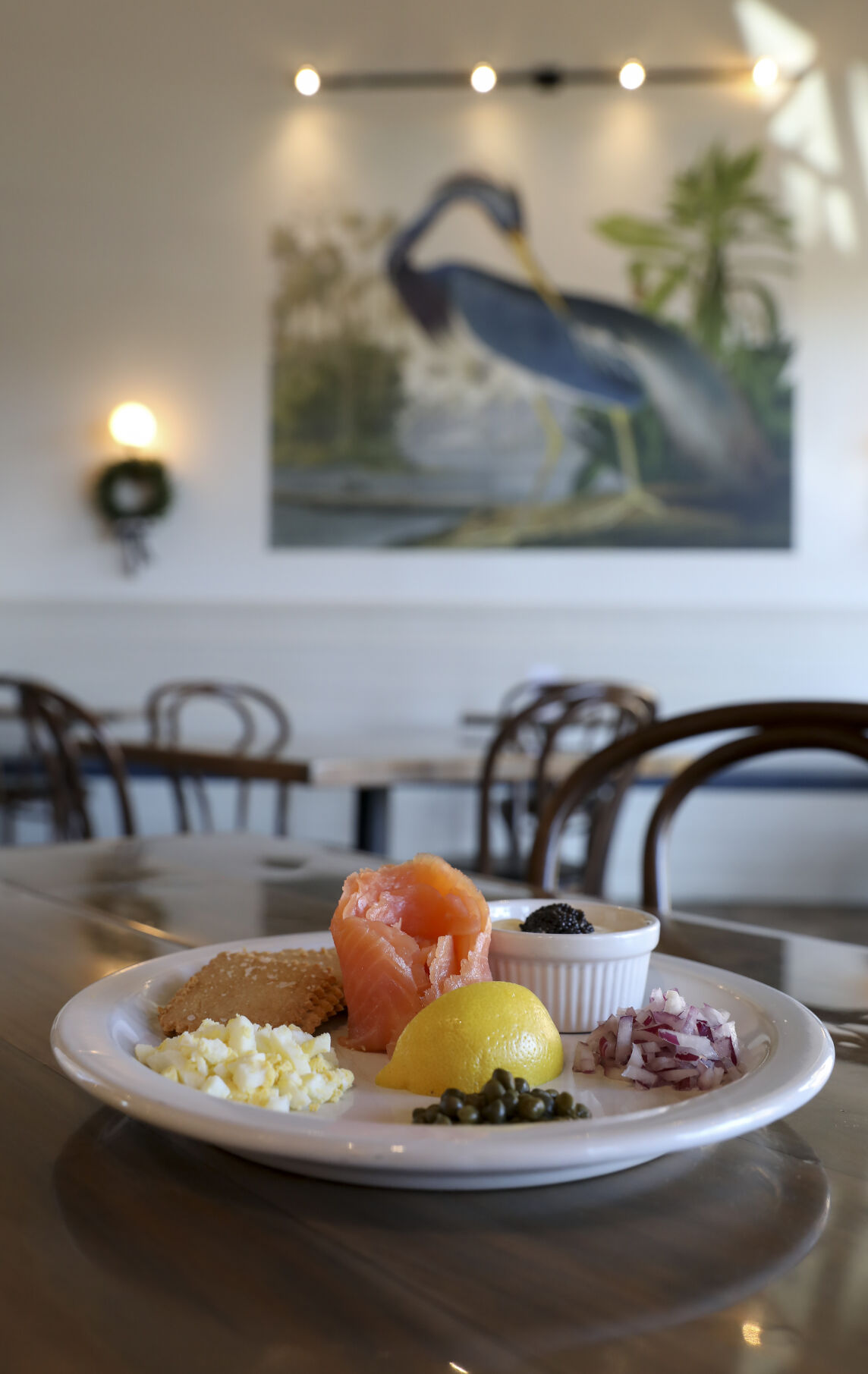 Smoked salmon with choupique caviar, crème fraîche and almond crackers is an appetizer choice on the réveillon menu at Eliza Restaurant & Bar. 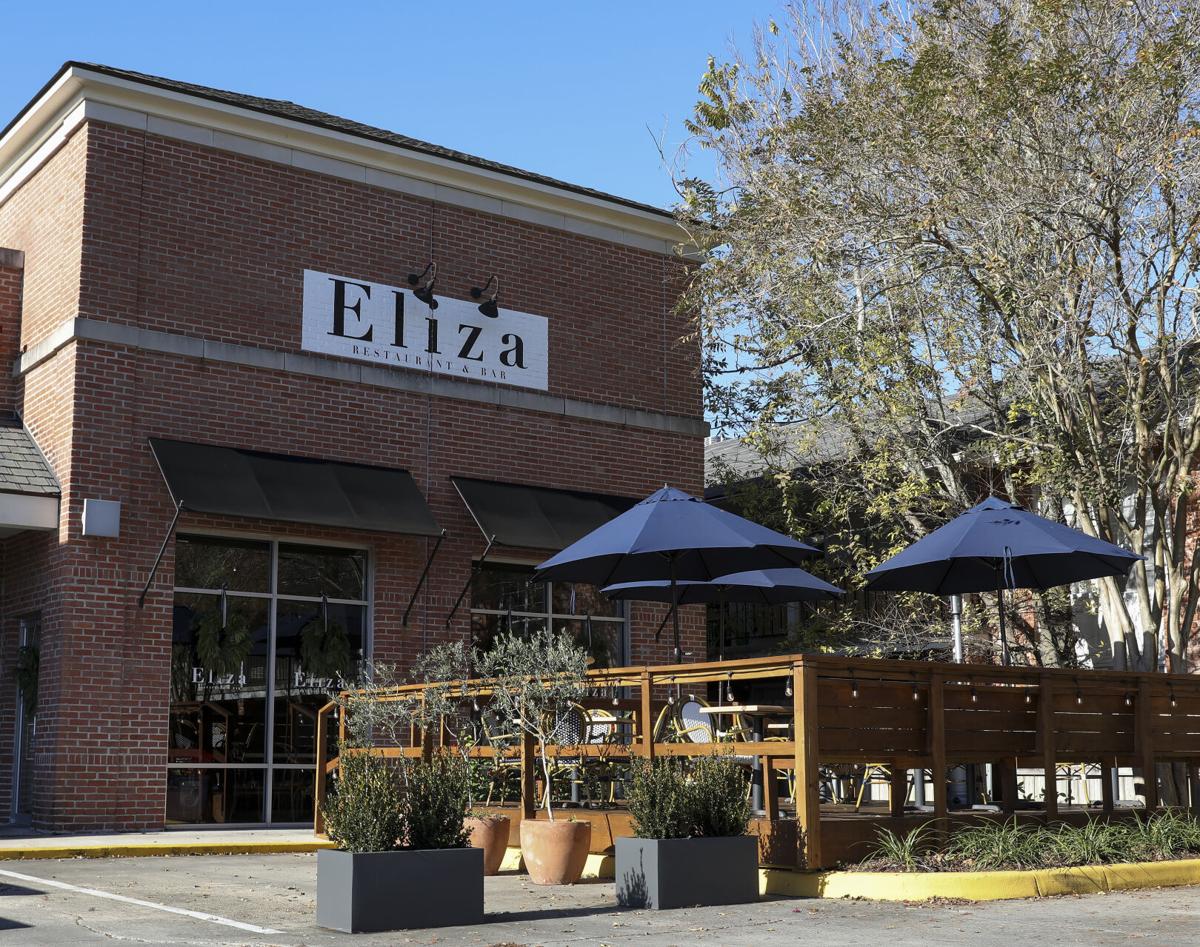 Eliza Restaurant & Bar opened in 2016 and is named for the daughter of owners Russell and Sally Davis. 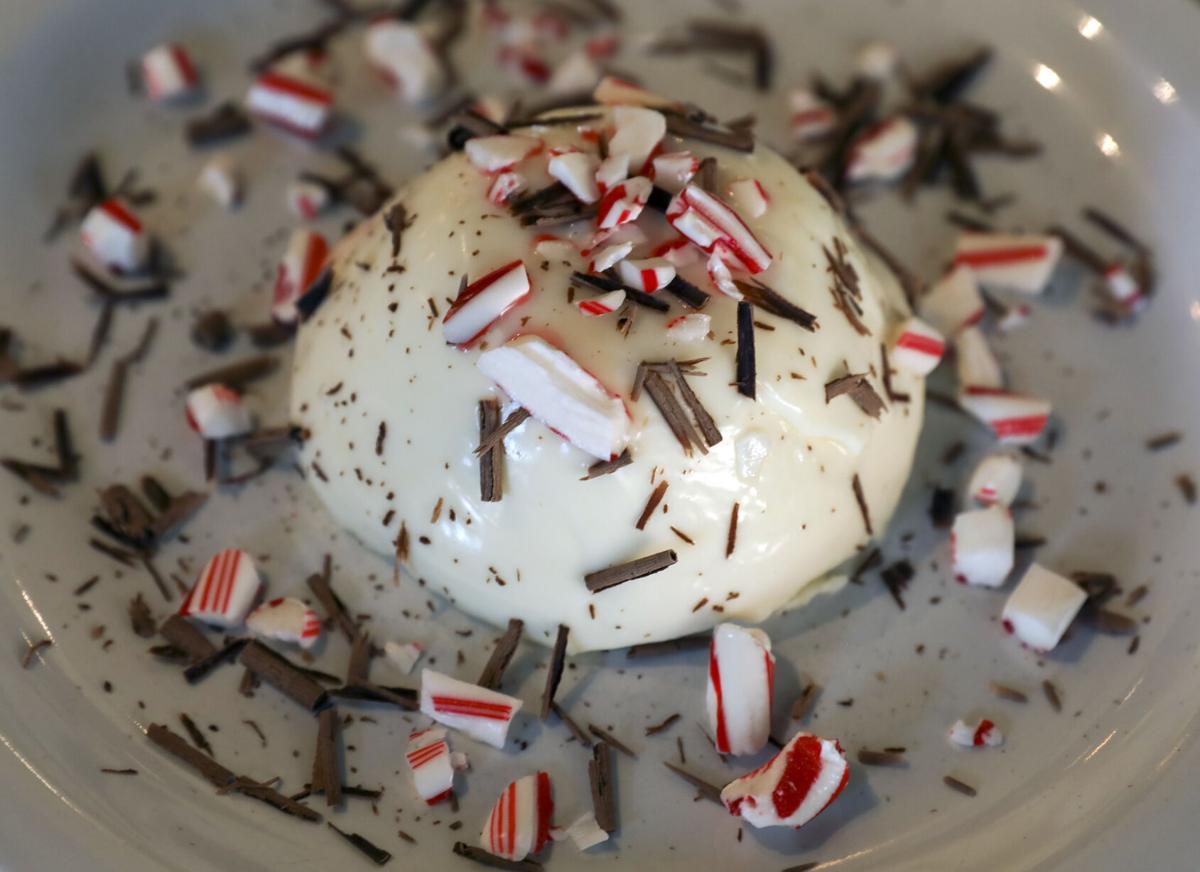 At Eliza Restaurant & Bar, owners Russell and Sally Davis serve Creole dishes — all made in-house from locally-sourced foods — with a contemporary spin.

Duck confit cassoulet with andouille sausage is one of the entrées choices on the réveillon menu at Eliza Restaurant & Bar.

Smoked salmon with choupique caviar, crème fraîche and almond crackers is an appetizer choice on the réveillon menu at Eliza Restaurant & Bar.

Eliza Restaurant & Bar opened in 2016 and is named for the daughter of owners Russell and Sally Davis.

When Russell and Sally Davis opened Eliza Restaurant & Bar in 2016, they had one goal in mind.

"When we started thinking about what we wanted this restaurant to be, we wanted to focus on Louisiana foods and Louisiana products, too," Russell Davis said. "We try to get everything from local suppliers. Every piece of seafood is local all of the time. We go to the farmers market on Saturdays, and we have things delivered from local farmers."

Russell Davis, who is executive chef at the small eatery at 7970 Jefferson Highway, infused into the menu all he has learned from his years in the restaurant business.

"I wanted to do the food I had been cooking and serving basically all of my adult life," he said. "There's not too many indigenous cuisines in the United States, but Creole and Cajun is, for sure, one of them, if not two. They oftentimes intermingle."

And, everything would be made in-house, from scratch.

"It's a labor of love," said Sally Davis, "but it definitely makes a difference."

Russell Davis decided to revisit Creole dishes he had served in the past and give them his own touch.

"I also gave them a little bit of a contemporary spin," he said. "That was kind of the way we planned out the menu, drawing inspiration from the classics, but then trying to put our own contemporary touch to each one of the dishes."

Eliza's menu is small and changes with the seasons.

No more so than during the holidays, when, for the second year, Eliza's is serving its réveillon menu as an option for lunch and dinner through Dec. 30.

The menu is based on the réveillon, or "awakening," a dinner tradition brought to Louisiana by French colonists in the early 19th century. After fasting prior to midnight Mass on Christmas Eve, churchgoers would return home to a large meal.

The custom began dwindling in the 20th century and was all but extinct by the 1940s. It was revived by the New Orleans restaurant community in the early 1990s and has since spread to other cities.

"When you do your research, you'll find that the table was laid out with rich foods," Sally Davis said. "It was definitely a celebration."

The three-course, multichoice réveillon meal, which costs $40, is a celebration of Creole-style foods with the Eliza touch. Along with Turtle Soup au Sherry, a classic réveillon dish, appetizer selections are smoked salmon with choupique caviar, crème fraîche and almond crackers, and chicken liver mousse with house pickles and Louisiana strawberry jam.

Entrée choices are a rich Creole bouillabaisse made with fish, shrimp and oysters; duck confit cassoulet with andouille sausage; and braised lamb shank with bourguignon sauce and Anson Mills grits.

The meal is rounded out dessert choices of chocolate mousse or peppermint panna cotta.

The Davises moved to Baton Rouge in 2015 after working in a large seafood restaurant chain in Massachusetts, the home state Russell Davis left at age 21 for New Orleans.

He'd been a stockbroker and hated it but had always loved working with food. On the encouragement of a friend attending the University of New Orleans, he packed his bags, traveled South and landed a job at Brennan's, where he started out as a food runner for then executive chef Emeril Legasse, who eventually promoted Davis to manager.

Meanwhile, Sally Davis was working as marketing director and events planner for Commander's Palace. After being introduced by a mutual friend, the couple eventually opened the Saltwater Grill in New Orleans.

Business dwindled after the BP oil spill, so the couple headed to Massachusetts then came back to Sally Davis' hometown of Baton Rouge, where Eliza, named for their 14-year-old daughter, came to fruition. They also own JED's Poboys, named for their 12-year-old son. The Davises also are parents to 26-year-old twin sons, both LSU graduates.

From hot cocoa 'bombs' to booze, Baton Rouge eateries have gifts for the foodies on your list

Finding the perfect present for the foodies on your list can be a win-win. They will get a gift they love, and you'll be helping to support lo…

At Eliza, Russell Davis has come up with dishes — the crabcakes, grilled Gulf fish and the Gumbo Ya-Ya, a dark roux filled with roasted chicken and andouille served over popcorn rice — that keeps diners coming back for more.

"And most recently, our smoked tuna dip is a rising star," Russell Davis said.

A Southern favorite, classic banana pudding, is the top-selling dessert.

Like the menu, the décor is distinctively Louisiana, with a mural of John James Audubon's Louisiana heron painting in the dining room that seats 50.

Audubon spent time in St. Francisville, where he painted many of the birds in his "Birds of America" collection.

"It had to be a piece of our culture and our pride," Sally Davis said, "and we thought Audubon would be a wonderful way to mark that."