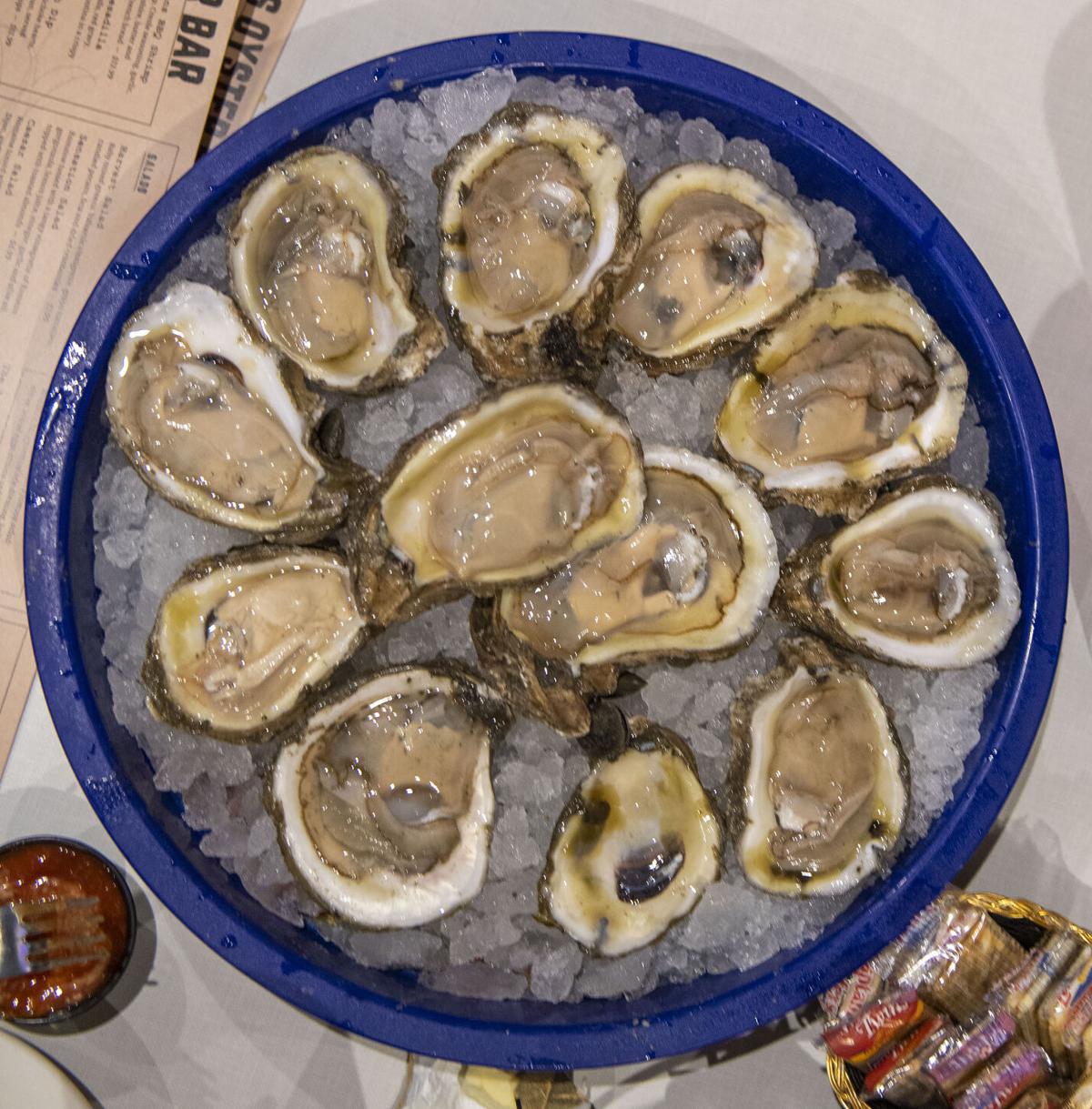 Oysters on the half-shell, along with charbroiled oysters, are the most popular dishes at Phil's Oyster Bar. 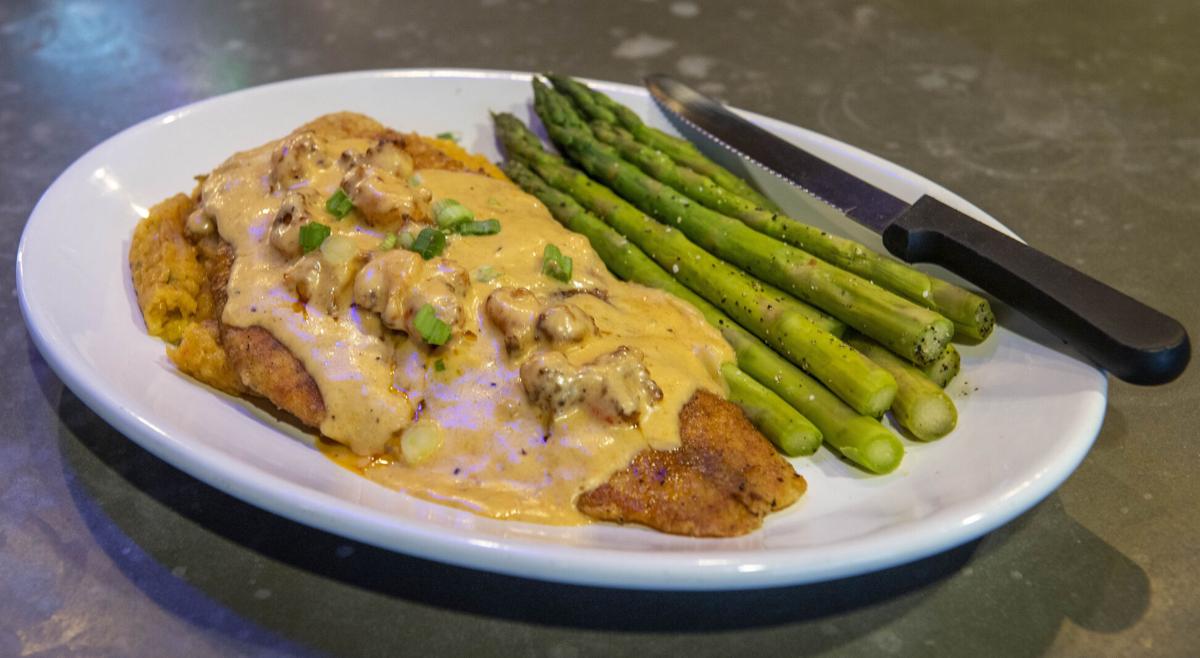 Trout Chalmette — pan-sauteed speckled trout topped with a crawfish cream sauce, served over crawfish spoonbread with asparagus — is like south Louisiana on a plate at Phil's Oyster Bar. 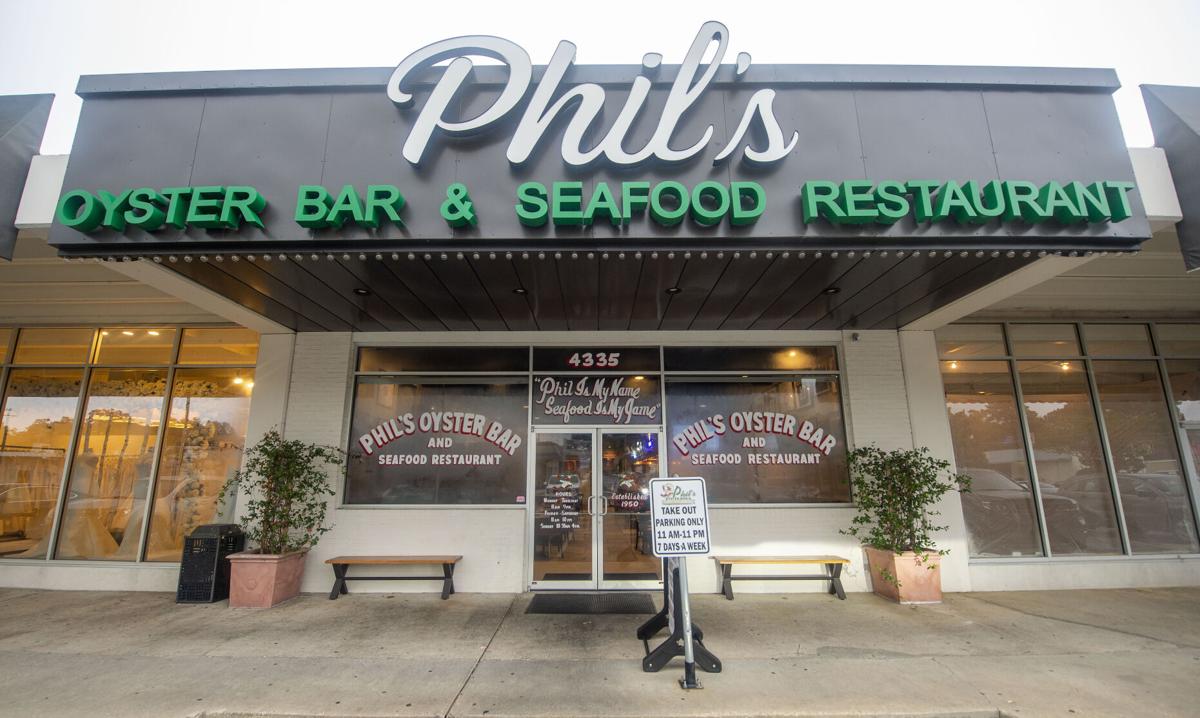 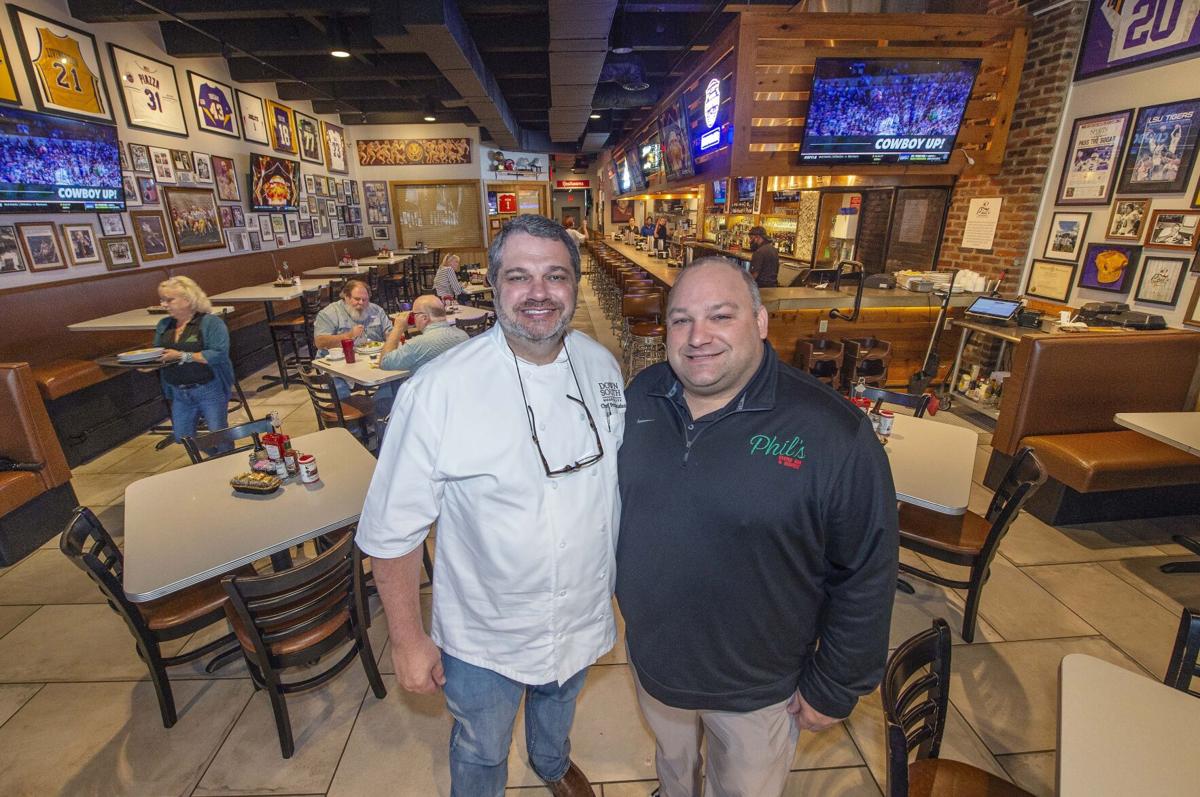 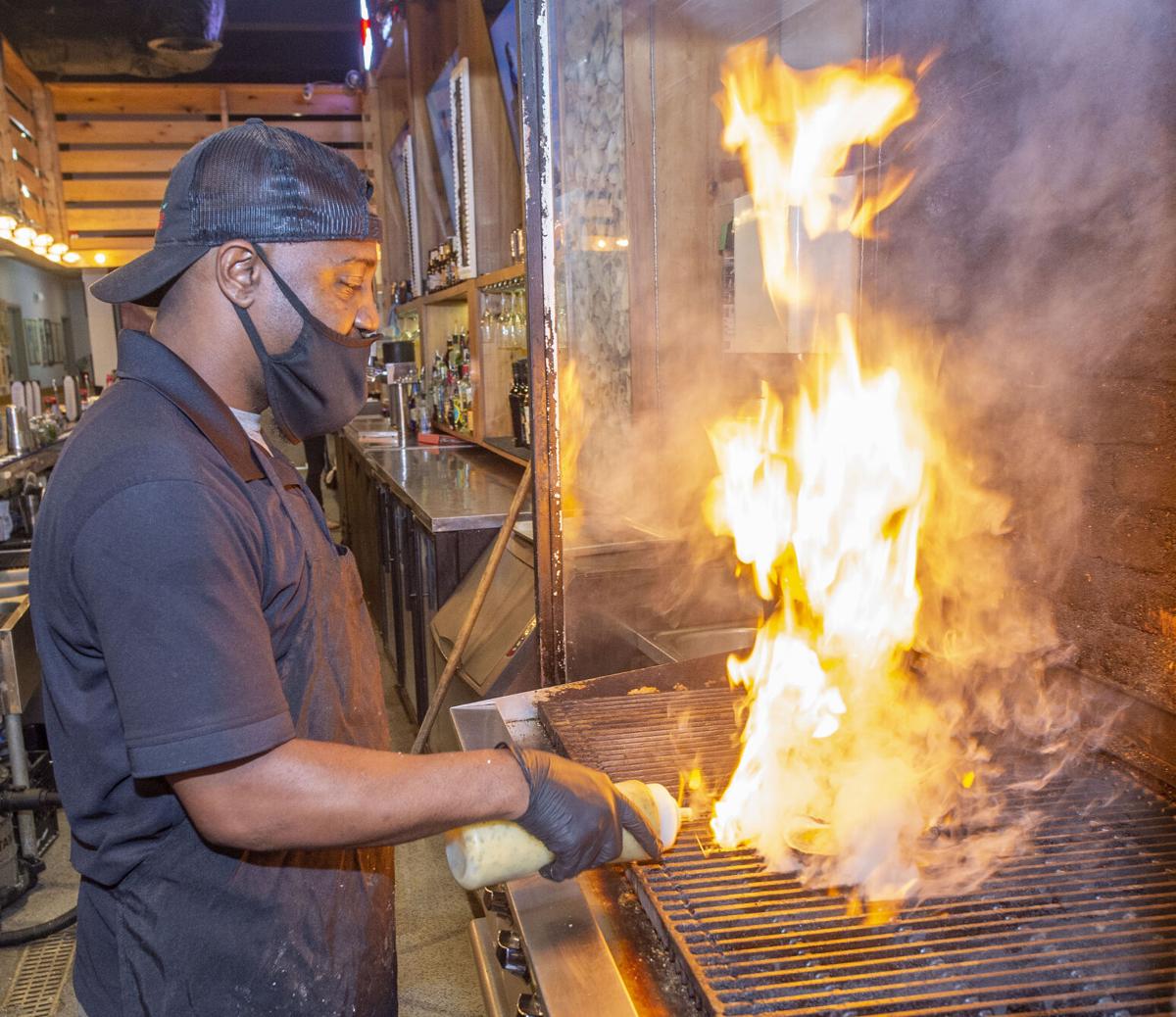 Don Hamilton fires up the grill for oysters at Phil's Oyster Bar. 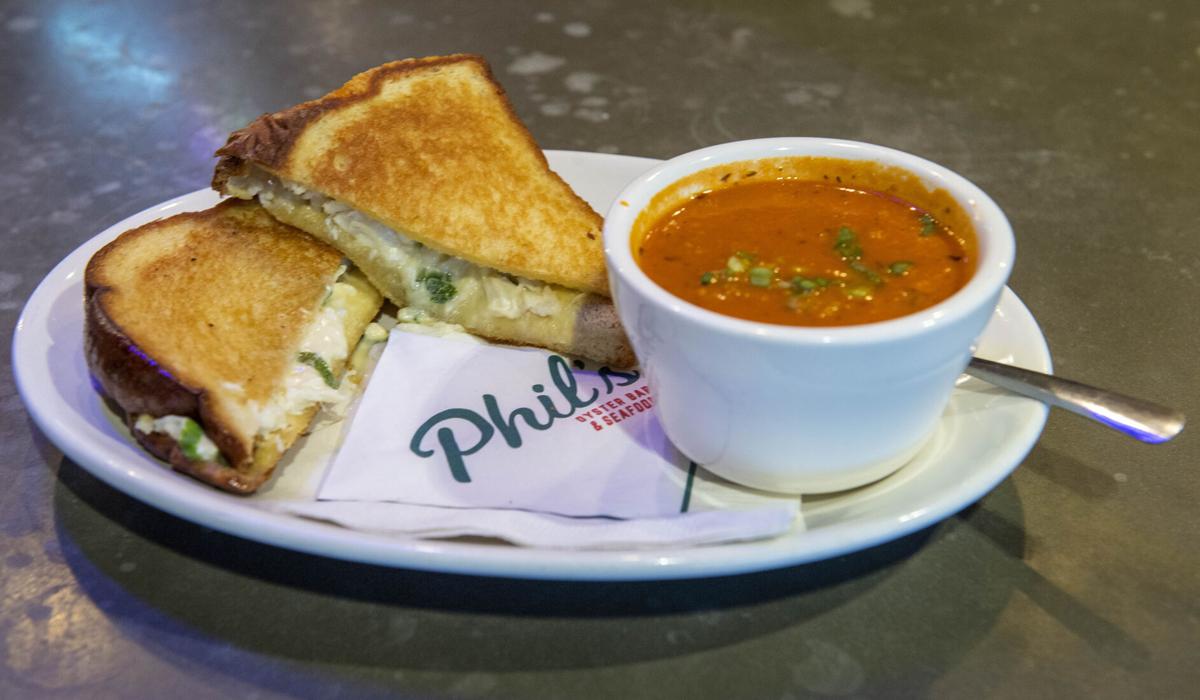 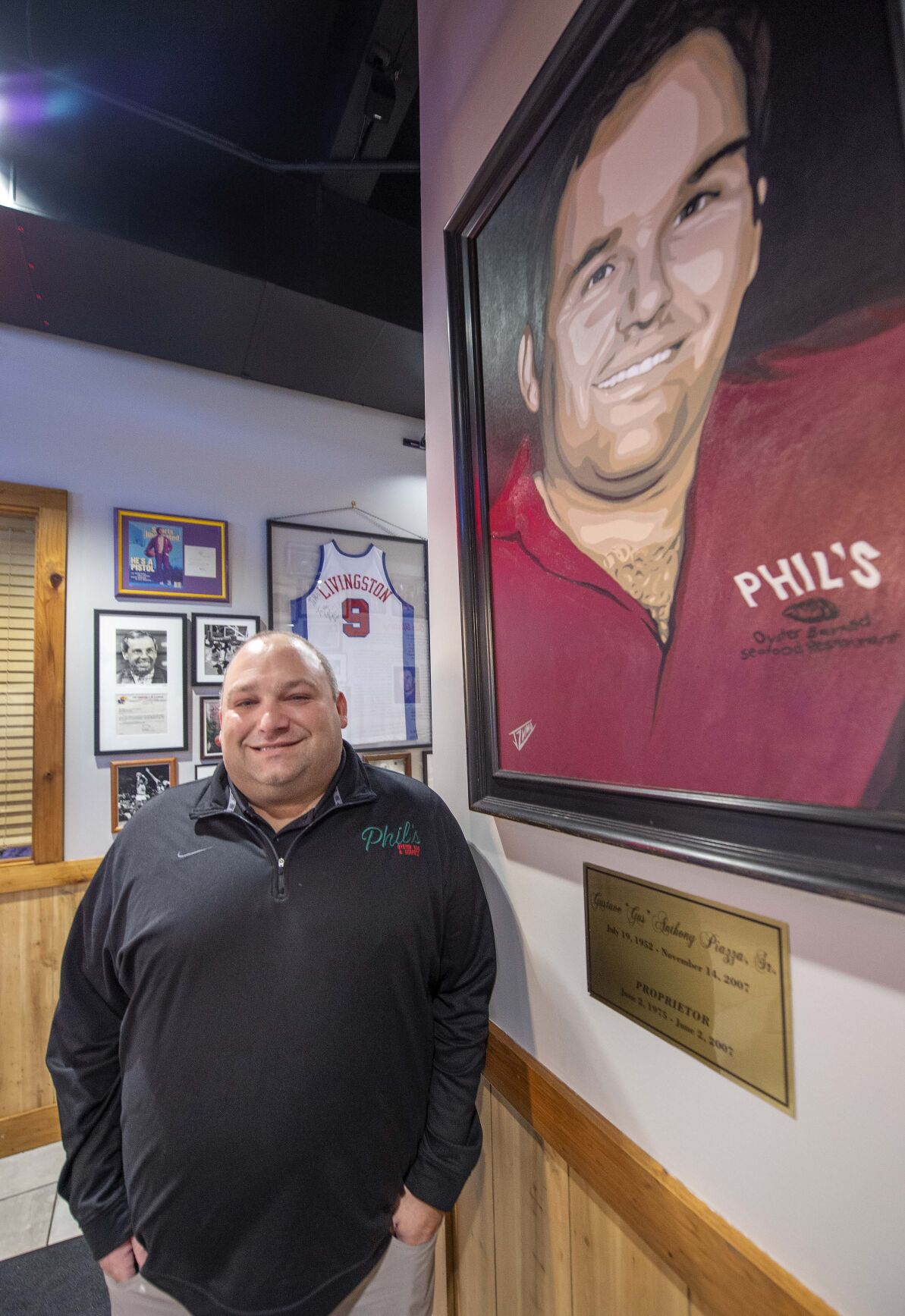 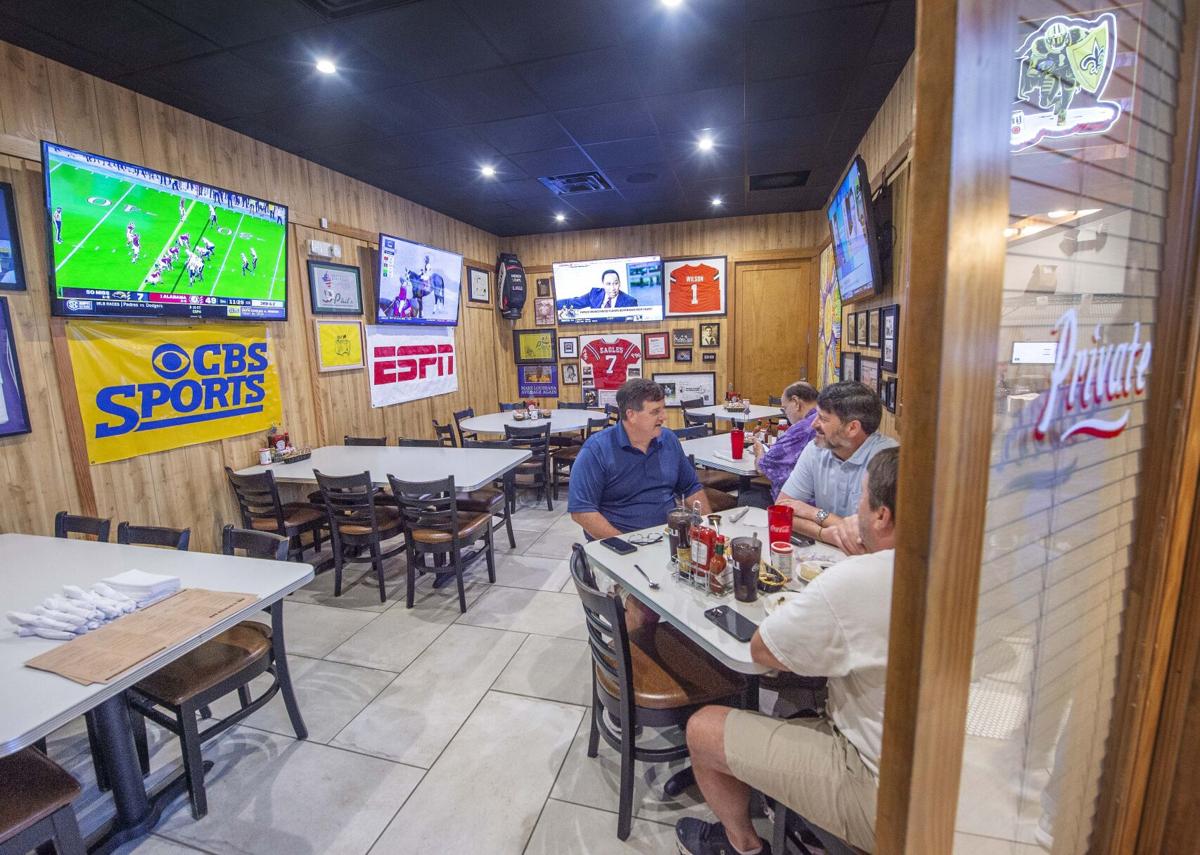 The back room at Phil's Oyster Bar is a legendary spot where business deals and political decisions get made.

Oysters on the half-shell, along with charbroiled oysters, are the most popular dishes at Phil's Oyster Bar.

Trout Chalmette — pan-sauteed speckled trout topped with a crawfish cream sauce, served over crawfish spoonbread with asparagus — is like south Louisiana on a plate at Phil's Oyster Bar.

Don Hamilton fires up the grill for oysters at Phil's Oyster Bar.

The back room at Phil's Oyster Bar is a legendary spot where business deals and political decisions get made.

There, among the many tasty dishes, you can dine on raw and charbroiled oysters, speckled trout, spaghetti and meatballs and pork chops.

All distinct dishes, but all part of south Louisiana.

And that's the aim of Anthony Piazza and Peter Sclafani, who became co-owners in 2019.

"We do two things here," Sclafani said. "One is to show guests what Louisiana tastes like. The other is to honor Gus (Piazza). If someone comes in and tells Anthony, 'Your dad would be so proud of what this place is,' that's all we want."

Phil Tuminello opened Phil's as a seafood market in 1950, but Gus Piazza, who bought it in the early 1970s, made it legendary, as evidenced by the photos and memorabilia that fill the walls.

"Everything has a story," Anthony Piazza said. "I don't even know the stories behind some of the pictures, but they all have to do with my family, the customers and the people my dad knew."

And his dad seemed to know everybody, including singer Lionel Richie, whose big, framed photo and autographed album hang on the dining room wall.

When Sclafani, a former co-owner and chef at Ruffino's, bought in, lots of people were surprised.

Explained the well-known chef: "When I was a little kid and couldn't see over a table, my dad's restaurant was exactly like Phil's, so it feels like coming home to me."

Sclafani stressed that Phil's wasn't broken, but needed a few tweaks, so he added a few dishes to the menu, including a Crab & Brie Grilled Cheese, with crabmeat, brie and fontina melted on a sandwich of brioche bread.

"It comes with some great homemade Creole tomato soup that you can dip your sandwich in," Sclafani said. "It's comforting like a grilled cheese, but it's elevated in a Louisiana-inspired way. It's that Louisiana-inspired food that you would expect from Phil's Oyster Bar."

Speckled trout is another customer favorite, served as Trout Almandine, pan-sautéed and topped with roasted almonds and lemon butter and served with asparagus.

"I think it might be one of the best dishes in Baton Rouge," Sclafani said.

And there's the Trout Chalmette, topped with a crawfish cream sauce, served over crawfish spoonbread and asparagus.

With a last name like Piazza, of course the menu includes spaghetti and meatballs, and the pork chop lunch is pretty special. Phil's also has a full bar.

Then there's the back room, where many business deals and political decisions have been made over servings of charbroiled oysters.

And there's always been a back room ever since Phil's started out on Government Street, then moved to Concord Avenue in 2002, where Gus Piazza ran it until his death in 2007.

In 2016, Anthony Piazza and his brother, Jordan, reopened Phil's at 4335 Perkins Road in the Southdowns area. Jordan Piazza has since stepped away from the business, but the back room lives on.

"You ought to see it at lunch," Piazza said. "You never know who you're going to see. Every owner of every major business in Louisiana comes and eats in the back room. Sometimes it's Shaq (O'Neal) — you just don't know who it's going to be, but they're going to be at Phil's. And everybody has a story about Phil's."

But what really matters to Piazza is the restaurant's family tradition.

As Piazza looks to the future, he holds on to the best of the past.

"The business has changed 20 times since it opened, but we've tried to keep the same core values," he said, such as using local vendors.

Just as Gus Piazza did, the restaurant gets its oysters from Louisiana Oyster Processors on Cherry Hill Avenue and bread from Wayne's Bakery on Plank Road.

"Peter did change our business, but he also came in and learned the history," Piazza said. "There are a lot of things that are sentimental to us. So, a lot of people would say our po-boy bread is not New Orleans bread, but my dad had a connection to Wayne's Bakery. So, we called that a nonnegotiable. And we use a certain kind of oil because my dad wanted to use it, when it's not the cheapest oil."

None of that was a problem for Sclafani.

"I'm like, 'This bread is great, why do we have to change it?'" Sclafani said. "And the oil is great. The food tastes good in it. That's what makes it Phil's."

"He just tweaked it, and now it's a totally different restaurant than it was two years," Piazza said. "He made it way better than I ever imagined it could be."

Sclafani said the changes are made in a way to honor Gus Piazza, something he believes Piazza continues to do.

"I think people come here to see Anthony just as they did Gus," he said. "He might be the best restaurateur in Louisiana. You can get a lot of places with good food, but Anthony is the key."

Frankie's Dawg House is off the beaten path, but its gourmet hot dogs make it worth the trip