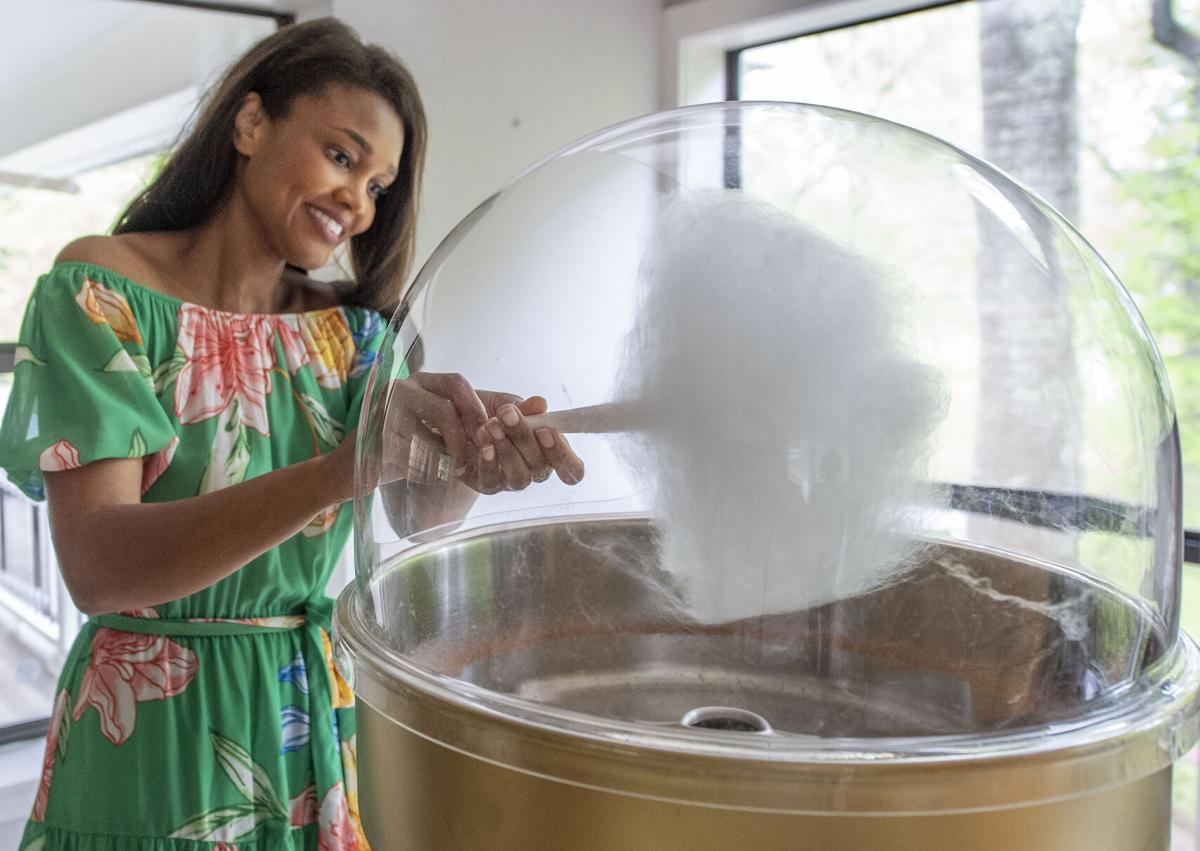 When Whitney Presley couldn't find cotton candy for a party, she decided to make her own. Now her Le Doodle Organic Cotton Candy business is growing fast. 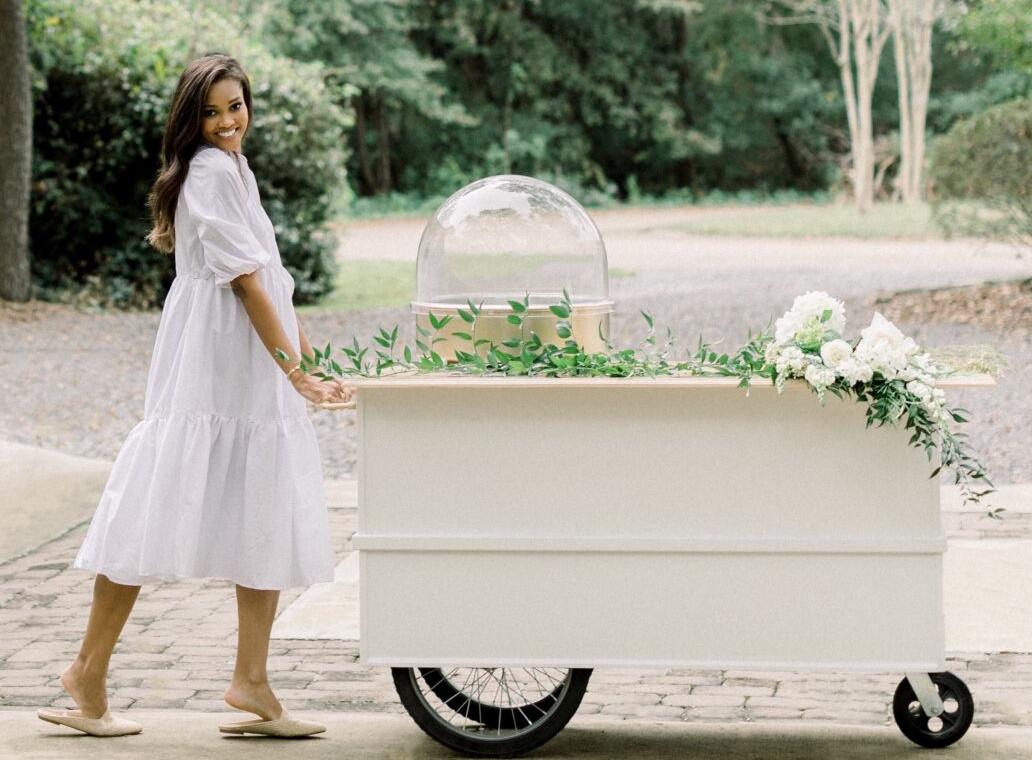 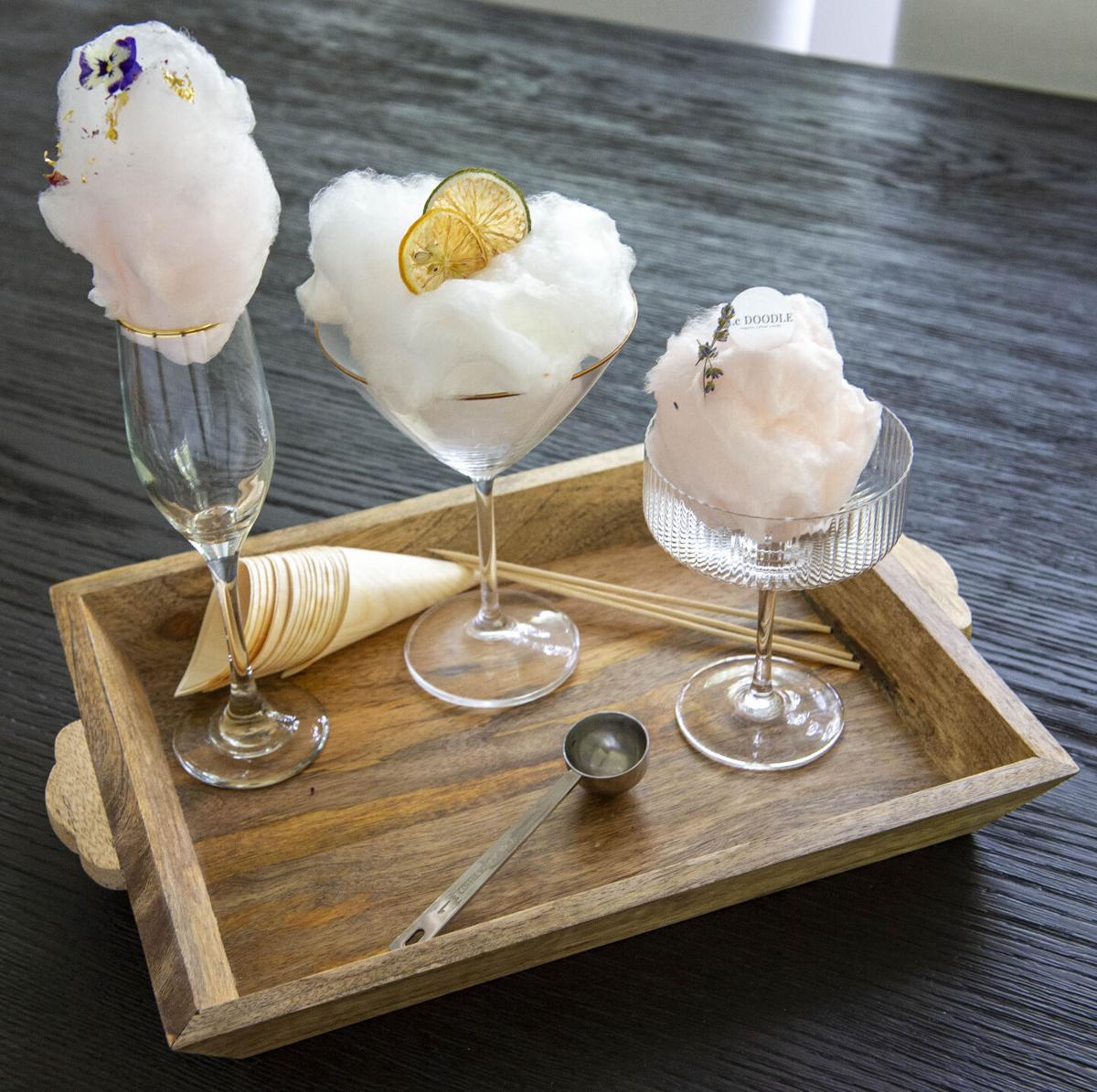 Tufts of Le Doodle's cotton candy sit in cocktail glasses, waiting for the next ingredients. 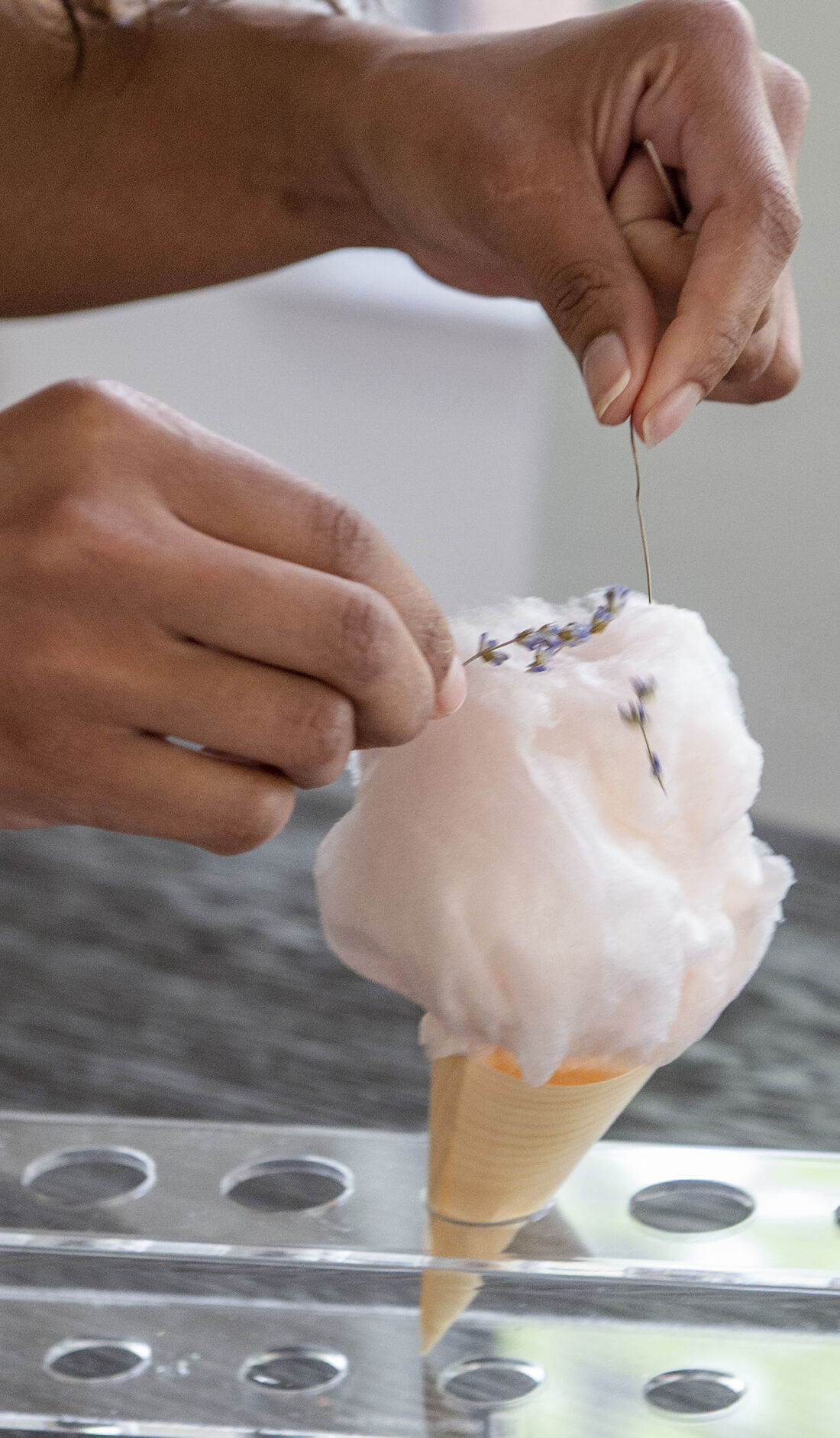 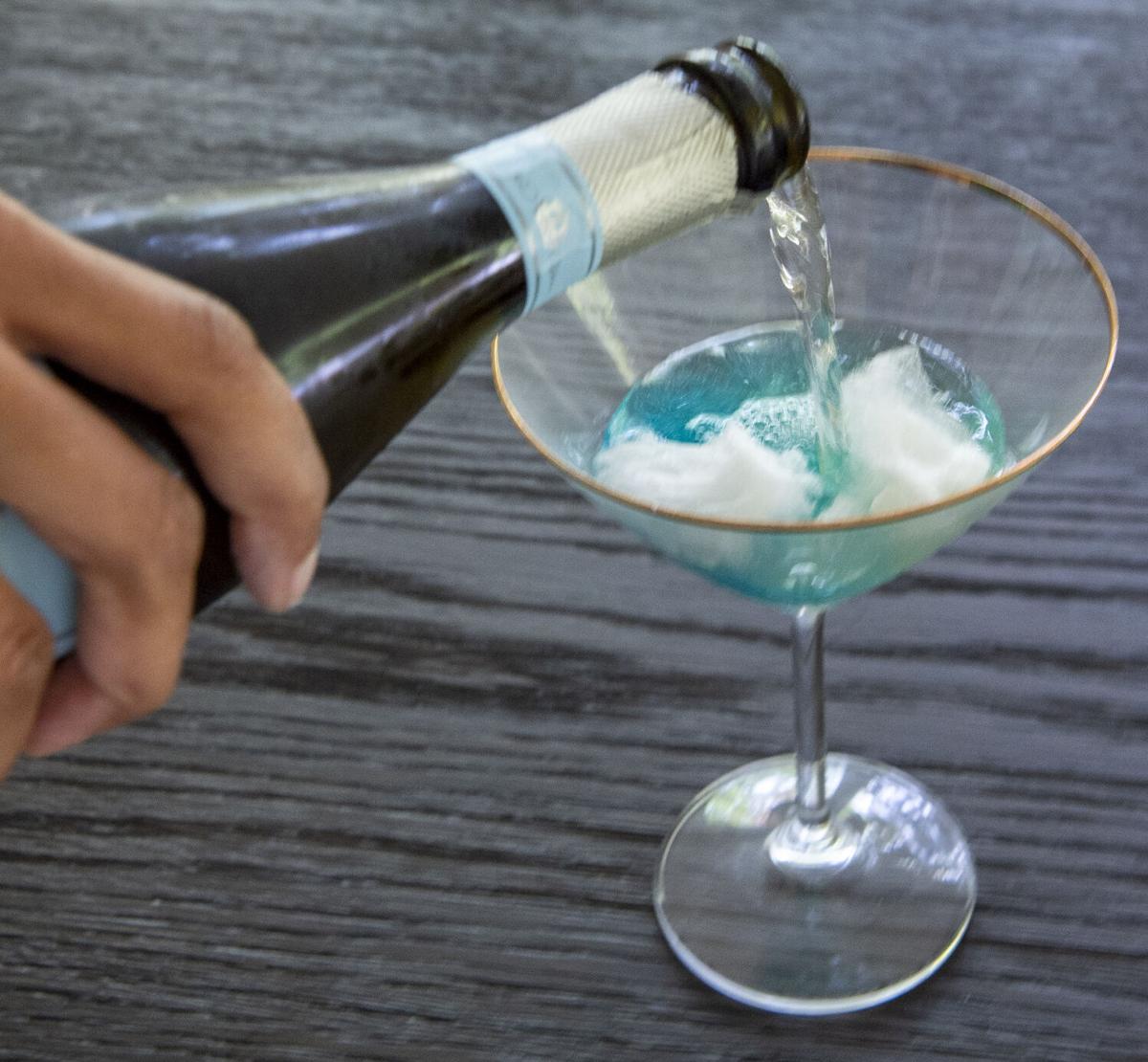 Whitney Presley creates her own flavors for the raw sugar she uses to create her organic cotton candy.

Champagne will be poured over this swirl of garnished cotton candy for a Le Doodle cocktail.

When Whitney Presley couldn't find cotton candy for a party, she decided to make her own. Now her Le Doodle Organic Cotton Candy business is growing fast.

Tufts of Le Doodle's cotton candy sit in cocktail glasses, waiting for the next ingredients.

Whitney Presley creates her own flavors for the raw sugar she uses to create her organic cotton candy.

Champagne will be poured over this swirl of garnished cotton candy for a Le Doodle cocktail.

It's light. It's low in calories. And, just as the name says, it's organic.

"I call this a redefining of classic confection because, as we know, the cotton candy we all grew up on was either pink or blue," owner Whitney Presley said. "After people taste mine, they're like, 'Oh my gosh, I can eat on this all day.' It's so light, and you don't feel bogged down."

Not only has Presley reinvented cotton candy, but she's also reinvented how to eat (and drink) it.

She mixes it in cocktails, swirls it atop a paper cone and bags it as party favors.

Her business has become so popular, she's booked for parties well into 2022.

But what has turned out to be a hit with customers wasn't Presley's plan at all.

Like many great enterprises, it started out with an unmet need.

"His theme had a lot to do with clouds, so I was trying to think of a fun thing food-wise that would compliment clouds, and that was cotton candy," Presley said. "I was looking for someone to be able to make cotton candy fresh for the kids."

When she couldn't find it, Presley decided to do her own thing. She bought a cotton candy machine and taught herself how to make the confectionary treat, using raw sugar and flavoring it with locally sourced organic oils.

"I kind of thought this was just going to be a side gig that I would just do as a hobby, and boy was I wrong," Presley said. "And it's so fun. There's nothing like it in Baton Rouge."

Her father-in-law, Scott Presley, built her a cart with clean, minimalist lines appropriate to wheel into any occasion.

While the pandemic canceled young Walker's party, others found out about Presley's sweet treats and began to book Le Doodle Organic Cotton Candy for parties.

The company's name was inspired by Whitney and Steven Presley's nickname, Noodle Doodle, for their son.

"My family and friends were saying, 'Whitney, this is a really good opportunity for you,'" Presley said. "Not only were they trying to get me to share this type of creativity for years, but I had this really pretty cart that enabled me to come to people. Even with COVID, people were still wanting to celebrate monumental events. I became one of the businesses that comes out to you."

She now has three cotton candy machines — one to experiment with, one to bring to events and the third to produce cotton candy in mass, which can be bagged for party favors and other sales.

Specialty flavors include "It's My Party," which is vanilla topped with confetti sprinkles; "Salted Caramel," rich caramel with a dash of pink Himalayan salt; and "The Presley," peanut butter and chocolate, topped with bacon bits.

"Since my last name is Presley, I wanted to do something with Elvis," Presley said. "Now I'm working on new flavors for the summer."

Working with cotton candy seemed only natural for Presley, who previously baked and decorated cakes and hosted parties with her mom. Presley also a background in art, and receives lots of requests for her abstract impressionist paintings.

Now she's transferred that creativity to her business, especially her cotton candy cocktails.

"It doesn't even take half of a tablespoonful of sugar to make cotton candy for a cocktail," Presley said. "So it's just a smidgen of sugar. People get so excited when I do it, but that's all it takes you to get a big fluffy cone. I wanted something fun for adults. I wanted something to appeal to everyone."

Presley recommends plain cotton candy made from raw sugar, which will sweeten the drink without altering the taste.

She garnishes the cocktail cotton candy with edible flowers and gold leaf, along with edible paper bearing names or logos. She also adds edible glitter, which simply makes the drink sparkle with no added taste or texture.

As Presley's business booms, her father-in-law is putting the finishing touches on a second cart.

"I want to be able to appeal to everyone," she said. "I did a baby shower recently. I made rosewater and lemonade for the little girls, and they loved getting a little Champagne glass and putting the cotton candy on top. They just felt so sophisticated. That's what makes it fun."

Still, running a business isn't easy while tending to a 2-year-old and working on a doctorate's degree in educational leadership at LSU.

Presley plans to graduate in 2021, and she's trying to figure out how much time she wants to devote to Le Doodle while pursuing a career in her field.

This week's listing of live music is the biggest we've had in a while. Solo artists and bands are again performing, mostly at smaller venues, …