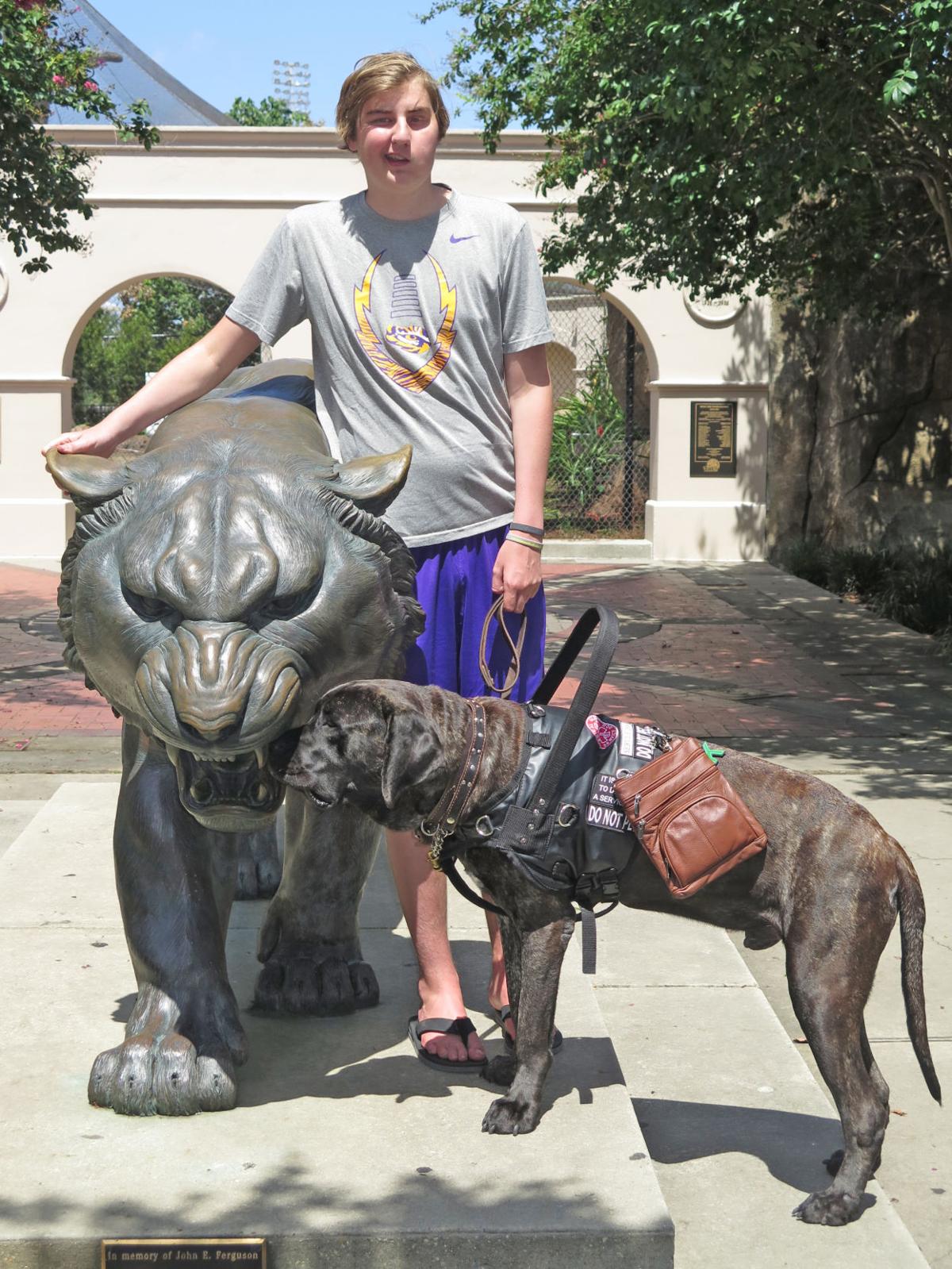 Kayne Finley and Moose stand by the bronze statue in front of Mike the Tiger's habitat. 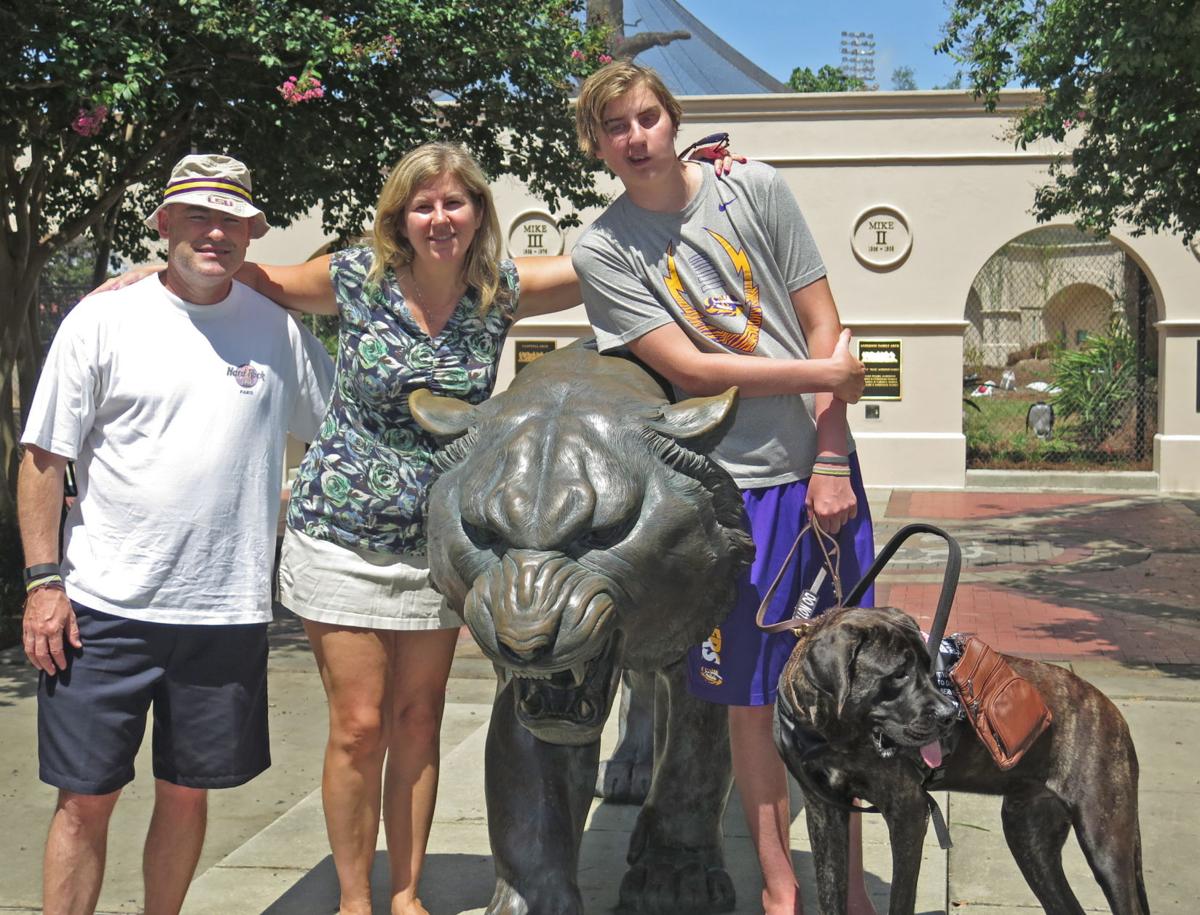 Kayne Finley, right, with parents Curtis and Kirsten Finley and service dog, Moose, have become an LSU family, even though Kayne Finley is suffering from a brain tumor.

Kayne Finley and Moose stand by the bronze statue in front of Mike the Tiger's habitat.

Kayne Finley, right, with parents Curtis and Kirsten Finley and service dog, Moose, have become an LSU family, even though Kayne Finley is suffering from a brain tumor.

Like many freshmen at LSU this fall, Kayne Finley is adjusting to a new roommate. Only his is a 120-plus-pound English mastiff he affectionately calls Moose.

Moose is a service dog Finley received three weeks before coming to LSU from his south Florida home.

That job is alerting Finley to a migraine or pulling him in his wheelchair. The freshman has Diffuse Intrinsic Pontine Glioma, a cancerous tumor in the brain stem, that part of the brain just above the back of the neck that is connected to the spine. The brain stem controls breathing, heart rate, nerves and the muscles to see, hear, walk, talk and eat.

Finley was diagnosed in fall 2016, and the prognosis isn't good. Less than 1 percent of patients survive four years post diagnosis, and most die within the first year. Common symptoms include problems with balance and walking; problems with the eyes, including double vision, drooping eyelids, uncontrolled eye movements and blurred vision; problems with chewing and swallowing; nausea and vomiting; morning headache; and facial weakness or drooping, usually on one side.

But all of that, or rather none of that, is slowing Finley down. He's ticked one item off his bucket list — attending college.

This weekend, if all goes as planned, he'll attend his first game in Tiger Stadium and get an up-close meeting with LSU's Mike VII — ticking off two more items on that list. He also will serve as a manager for LSU's swim team, keeping him in touch with a sport he loves.

Before his diagnosis, Finley swam a lot. He tackled the 200-meter freestyle "even though I didn't like swimming it sometimes."

It was his Daytona Beach, Florida, swimming community that rallied around him just days after his diagnosis, raising money for research into pediatric brain tumors like Finley's through the #cannonballsforKayne Movement.

"(Olympian) Ryan Lochte's dad (Steven) was my coach," Finley said. "His sister was always hanging out on the pool deck. She helped start #cannonballsforKayne. Ryan did one (a cannonball in the pool) and so did a lot of other Olympians. It was very neat. All of a sudden, people around the world are doing cannonballs. Some helped pay for my treatment; some helped me get Moose; the rest goes to research."

Finley ended up at LSU because he loves dogs and animals in general.

"Working with animals was always in my mind," he said. "I found out LSU had a good vet school, so I applied (to LSU) and I got in."

He parents, Kirsten and Curtis Finley, are here, too.

On the trip to Baton Rouge for student orientation, the Finleys were separated on the flight. Kirsten Finley ended up sitting next to Dr. Chip Simon and shared her son's story and his dream of attending LSU. When they landed in Baton Rouge, Simon introduced the Finleys to wife Aimée, founder and president of the Bengal Belles booster organization. The families quickly formed a bond, with the Simons opening their home to the Finleys.

"We spent that weekend with them and watched LSU in the College World Series," Kristen Finley said. "It felt like family right away, and it's how it's felt every since.

"This was not your normal drop your child off at college," she said. "It's been a journey to get here. We treated it much like we did our other son when he went off to school. The difference is we're staying here in town with Kayne. The Simons are hosting us, and it's emotionally and financially lifted a burden off us."

The Finleys other son Keagen attends Florida State University, where he's on the swim team.

Kayne Finley lives in Blake Hall on campus, and he's taking 16 hours of classes, working toward a degree in animal science.

Meanwhile, he stays positive and continues to plan for his future, even if it involves a funeral.

From his mom's recent Facebook post: "Life is very different for Kayne at LSU than what he, Curtis and I had envisioned for him. Kayne was anticipating having the ability to walk around campus with Moose and attend classes. He envisioned being able to go out in the evenings with new friends. Kayne expected to go exploring on campus to the different areas, getting in exercise and the true feel for the college-life experience. Up to this point, mom and dad have been around him for some portion of time each day. He needs assistance now with walking even from the couch to the restroom, help with Moose, and preparing foods to eat. It's so aggravating that (Diffuse Intrinsic Pontine Glioma) has to be this way! It is totally unfair that it keeps stealing away Kayne's abilities to do what he would like on and around campus. There are so many contributions he wants to make on earth and yet, he verbalized that he knows he will not be able to do everything. God, please hear us pleading with you to show your mercy and give him more time here."

I hit the coaching trifecta last week. I had lunch with Coach O and LSU's new basketball coach Will Wade, and later the same night, I had dinn…