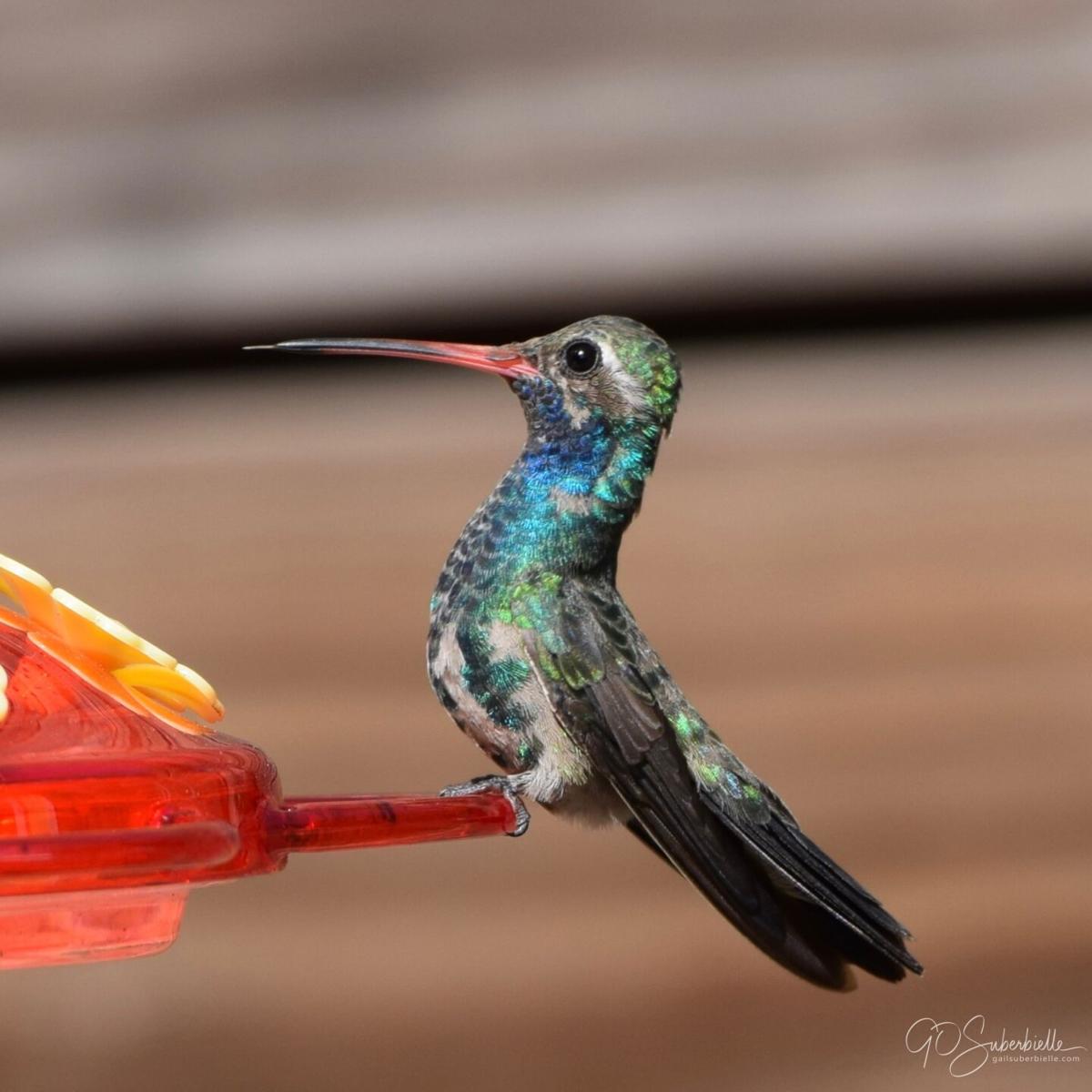 A broad-billed hummingbird, a fairly rare site in south Louisiana, perches on a feeder in Gail Suberbielle's Baton Rouge backyard. 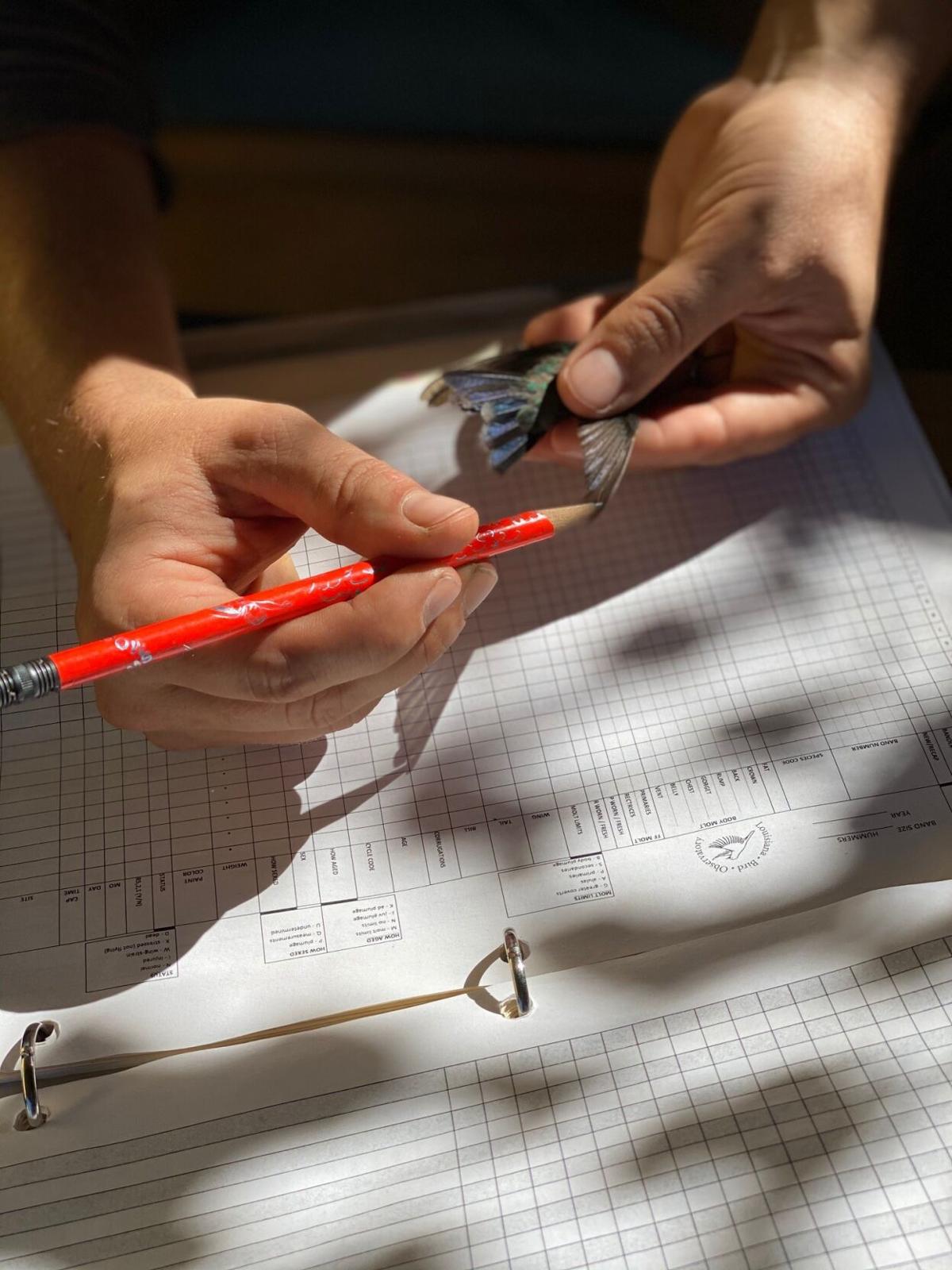 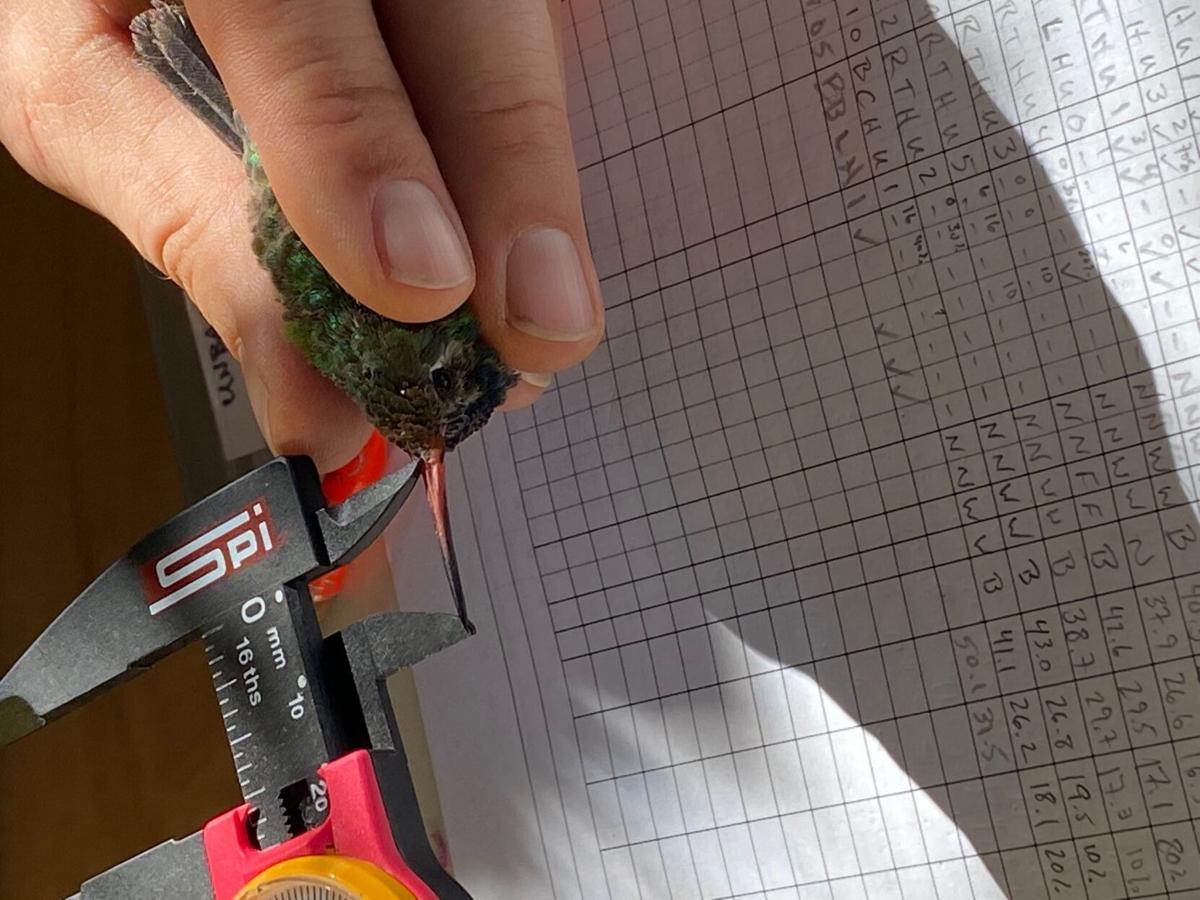 Measurements are taken on a broad-billed hummingbird captured in a Baton Rouge backyard before it is banded and set free. 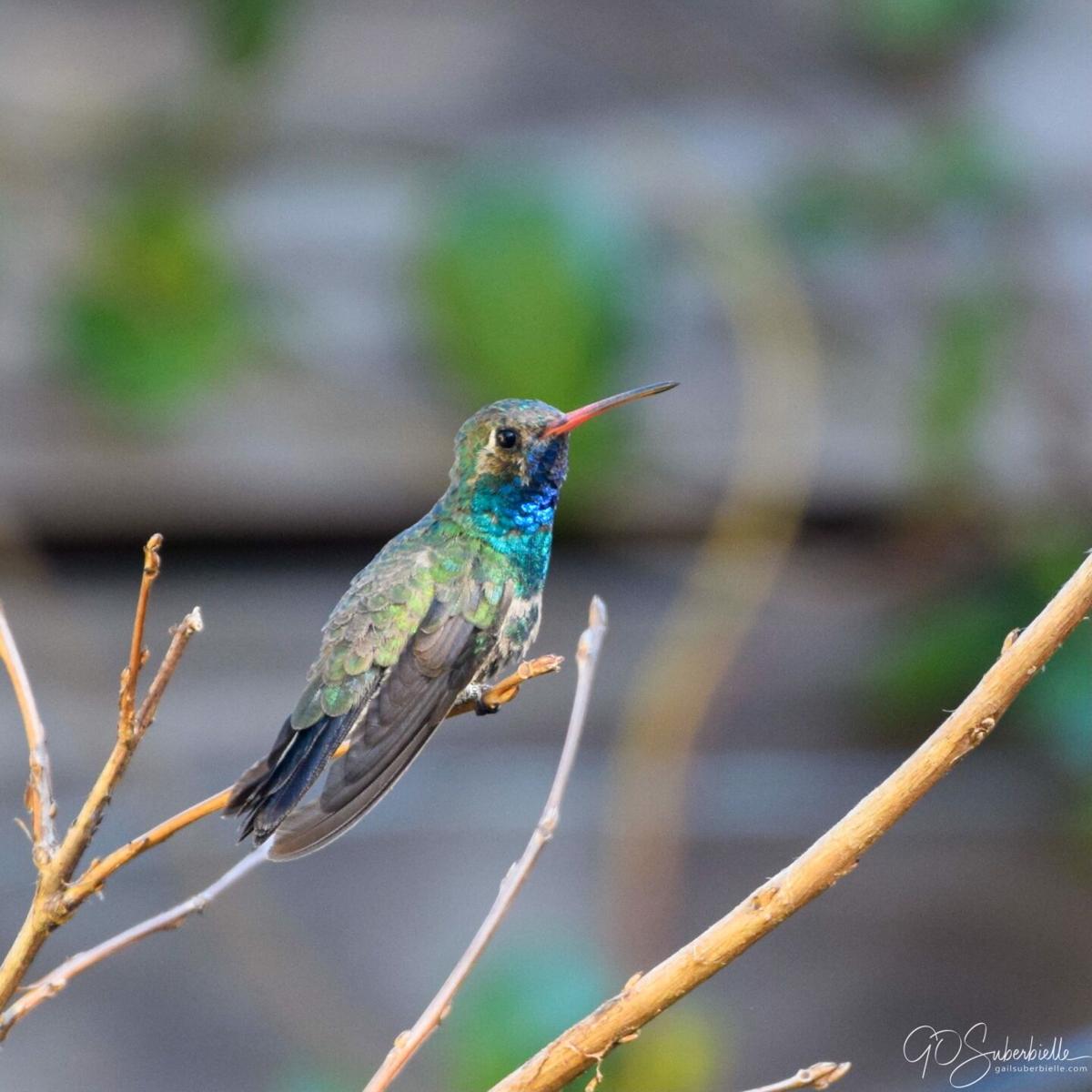 After this broad-billed hummingbird was banded, which can help researchers learn more about such things as migratory routes, it's set free in a Baton Rouge backyard.

A broad-billed hummingbird, a fairly rare site in south Louisiana, perches on a feeder in Gail Suberbielle's Baton Rouge backyard.

Measurements are taken on a broad-billed hummingbird captured in a Baton Rouge backyard before it is banded and set free.

After this broad-billed hummingbird was banded, which can help researchers learn more about such things as migratory routes, it's set free in a Baton Rouge backyard.

In early November, Gail Suberbielle thought it was time to take down the hummingbird feeder in her Baton Rouge backyard. Then, she spied a hummingbird buzzing nearby, so she refilled it and left it up. Not long after, she saw a flash of blue at the feeder, causing her to run for her camera. That bird was nothing like those that usually swooped in for a sip of the sweet nectar.

Suberbielle tried to identify the bird using her photos and online apps but failed. Her excitement really began after she posted her photos on some birding websites.

“I knew he was special, but I didn’t realize the scope of how big a deal he was,” she said.

What she spied — a broad-billed hummingbird — is a rare find in Louisiana and considered a “winter” hummingbird.

With its long, bright reddish bill, the tiny flier is "like a once-in-a-year find," said Jane Patterson, president of Baton Rouge Audubon Society.

“They are generally western species of hummingbirds that, for unknown reasons, choose to spend the winter along the Gulf coast rather than departing for their standard wintering grounds in Mexico and Central America,” she said.

Species such as rufous, Anna’s, Allens, buff-bellied, calliope, black-chinned, broad-tailed and broad-billed hummingbirds have all been found within Louisiana’s borders in the off-season. Patterson said that, even though they are classified as winter birds, some of them arrive as early as August.

The birds will generally pick a winter territory, stay through February or March, and then take off across the continent. Birders and bird banders in Louisiana have been tracking these little birds for several years.

Erik Johnson, director of bird conservation for Audubon Louisiana, arranged a visit to Suberbielle’s yard to safely trap the tiny bird and attach a band on its leg for research.

Many questions can be answered if the bird is eventually recaptured, including routes of migration, said Johnson, whose special interest is hummingbird molting, the loss of old feathers and growth of new ones that occurs in mid- to late summer before hummingbirds migrate south.

The hummingbird was still in the molting process, Johnson said, so it’s possible it could remain in Baton Rouge a few more weeks or even months until it flies south to Mexico.

“Nancy’s work established a baseline of what we know is here,” Johnson said.

He, along with other researchers, has continued to gather information on winter hummingbirds. The project compiles all observations of wintering hummingbirds in Louisiana through the app iNaturalist, and Johnson encouraged residents to participate.

If you see a hummingbird at your feeder from November through February, email erik.johnson@audubon.org the following information: your name, address (town only is acceptable), the first observed date of the hummingbird, species (if known), sex (male, female or unknown), whether the bird is banded (and, if possible to see, when and by whom) and any photos.

To attract winter hummingbirds, or any birds, to your yard, Patterson suggested offering a water source (birdbaths, misters) and providing food with bird feeders. Hummingbirds need leaf cover, so it may help if you have evergreens like camellias, sweet olive, hollies and ligustrum in your landscaping. Hang a few feeders, but also provide winter flowers, such as shrimp plant, cuphea, russelia, firespike and abutilon.

Leaving hummingbird feeders out will not interfere with migration. If you leave your feeder out for winter, continue to change the nectar regularly to make sure it stays fresh and won’t go rancid, she said.

Suberbielle hopes her rare visitor will remain for at least for a little while.

“It’s been really fun to have him here. I’ll miss him when he leaves,” she said.

Birdhouses: Our feathered friends may need help when it comes to nesting

Decorative birdhouses look cute in your garden, but if you really want birds to settle in, you may have to customize them.