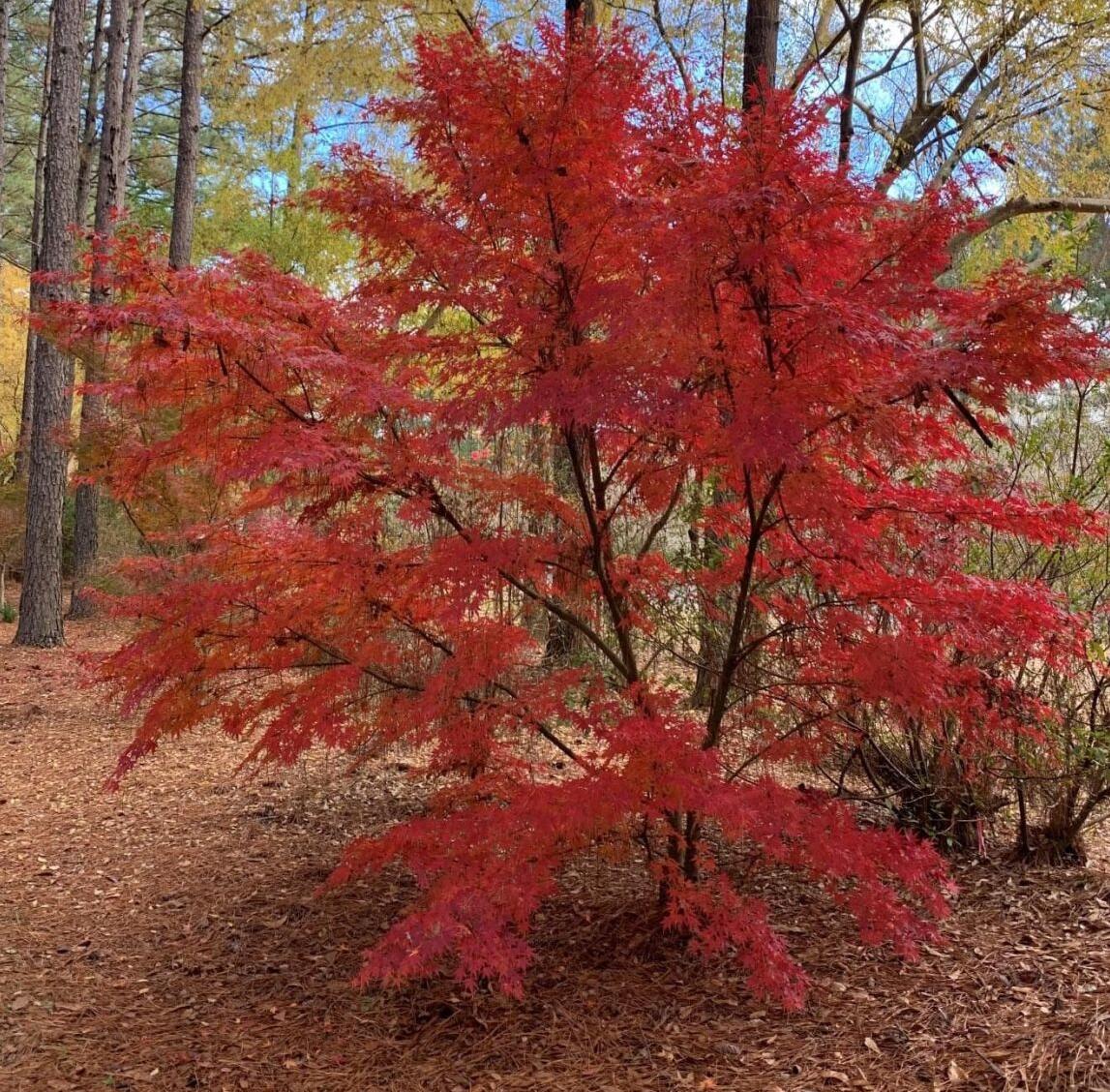 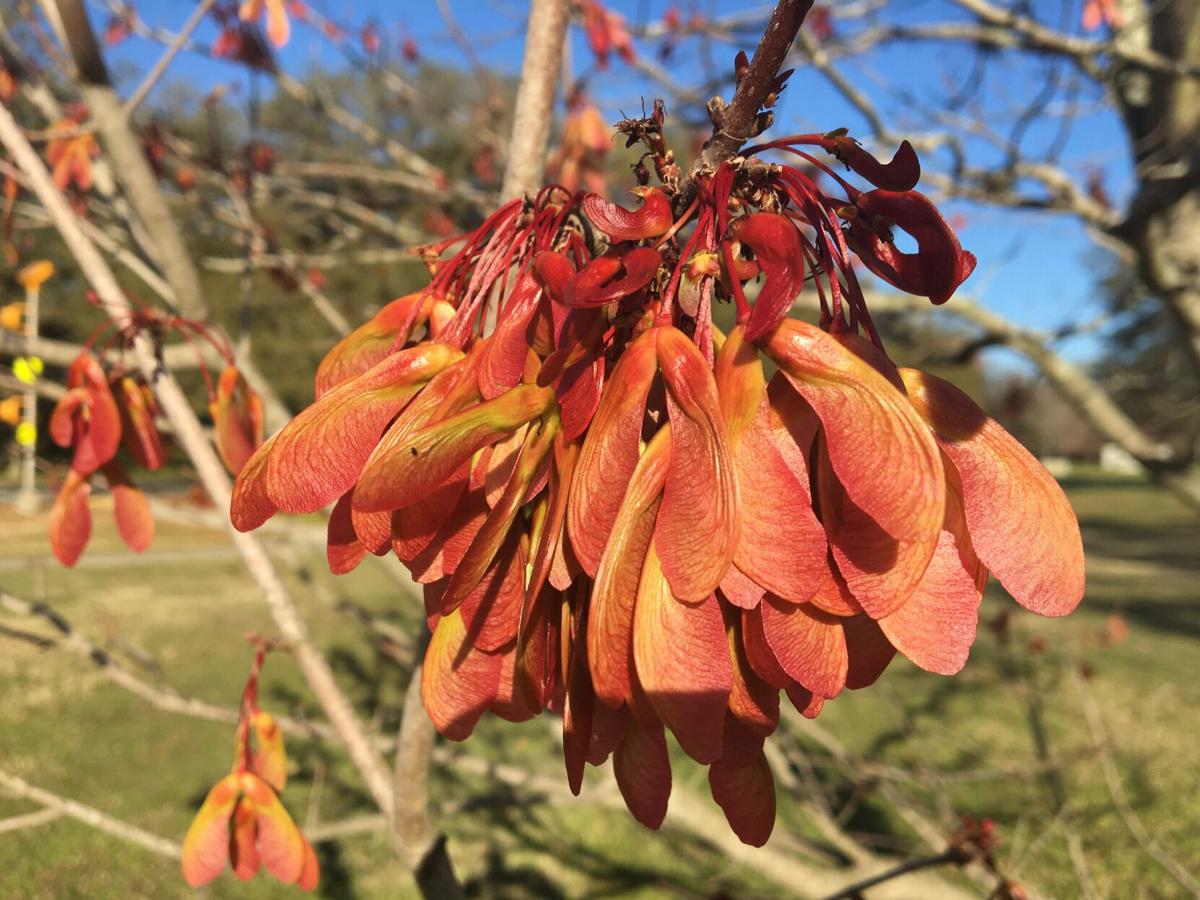 Japanese maples have wing-shaped seeds containing nutlet fruits called samaras that spin as they fall to the ground.

Japanese maples have wing-shaped seeds containing nutlet fruits called samaras that spin as they fall to the ground.

Japanese maples are one of the most striking small trees for the landscape.

They come in many different varieties, some growing 15 to 20 feet high at maturity and a width of 10 to 15 feet. Some grow wider than tall; others have umbrella-shaped canopies. There's also cascading forms and some dwarf varieties. All have unique leaves — from intricately serrated and jagged to a finer-textured foliage referred to as thread leaf forms — that make them so distinctive.

These trees leaf out in a rainbow of colors from varied shades of lime, green and red all the way to a deep maroon. Red-leaf cultivars are the most popular, with the bright green cultivars coming in second. Most of the green-foliage varieties turn red or yellow in fall.

Maples favor cooler climates, and grow best in USDA hardiness zones 5 to 8. They will do well in the northern parts of Louisiana, but growing them in the more southern part of the state can be tricky, especially in zone 9. However, it can be done.

Most varieties should be planted in partial sun to partial shade. Morning sun is better. In full sun, some varieties will burn, especially in summertime heat. Foliage will be more vibrant in sites that get a little more sun.

These trees have shallow root systems, so protect them from drying winds with mulch.

Japanese maples grow slowly — about 1 to 2 feet per year — but they can live for up to 100 years.

In Japan, the maple is called the “autumn welcoming tree” and is planted in the western part of gardens (the direction fall comes from). Additionally, deep-fried maple leaves are a delicacy in Japanese cuisine.

Trees can be grown from seed but may not be true to type. They can also be grown from cuttings, but that's a challenge, as most cuttings are weak and slow growing and do not overwinter well. Most of the Japanese maples in garden centers are grafted onto a more vigorous rootstock.

Once established, these tree require little maintenance. You can prune them lightly during winter for the first five years to obtain the desired shape. Apply light applications of slow-release fertilizer in early spring before new growth once a year for the first few years. Fertilize every couple of years thereafter.

There is a species that will thrive in almost every type of soil. However, none fare well in overly boggy conditions. And they must be watered during droughts.

Some varieties of Japanese maples include Bloodgood, Burgundy Lace, Coral Bark, Crimson Queen, Emperor One, Fireglow and Tamekeyama. Many are available at local garden centers.

Crimson Queen is a low-branching, dwarf tree with a delicate, weeping form. It is sun tolerant in colder climates, but in warmer climates, it performs best in bright areas with dappled sun. Red Dragon is more heat tolerant, but it is a slow-growing tree that may be suitable for more southern climate of the state.

In addition to their gorgeous leaves, Japanese maples produce inconspicuous flowers that are followed by fruits called samaras. These fruits are tiny nutlets enclosed in a papery tissue in the shape of wings that spin as they fall and are carried off by the wind to considerable distances.

Japanese maples are monoecious, meaning they have both male and female flowers on the same plant. The small flowers attract birds, including grouse, quail and other songbirds. The seeds are excellent food sources for squirrels, chipmunks and other small mammals.

If you don’t have a place in the landscape suitable for a tree, smaller varieties are excellent for container plantings on patios and other protected areas with partial sun.

The AgCenter Hammond Research Station has an evaluation and collection program with more than a hundred Japanese maple varieties currently planted. Late fall and early winter are a great time to go out and see these maples as they put on their fall foliage change. It can be simply breathtaking.