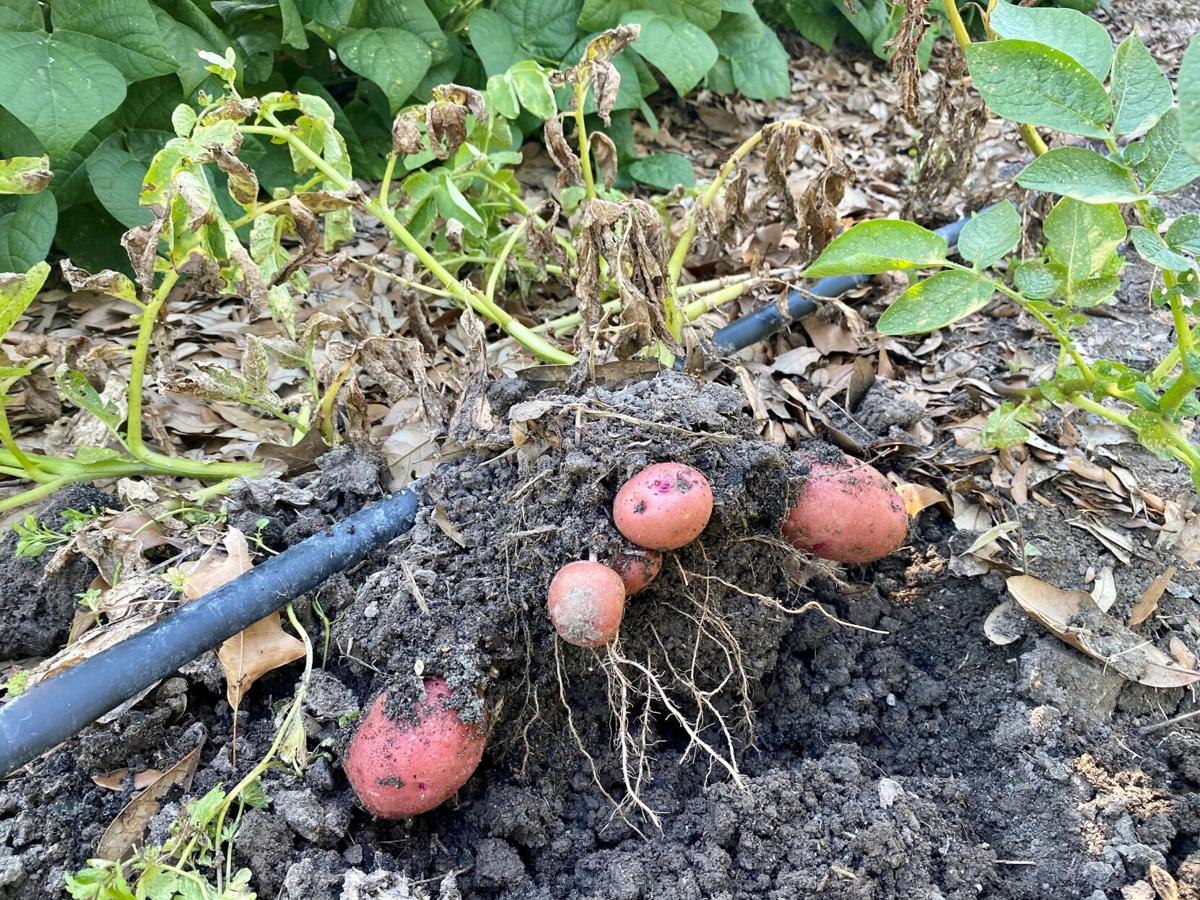 Potatoes are ready for harvest when the leaves above ground turn yellow, then die. 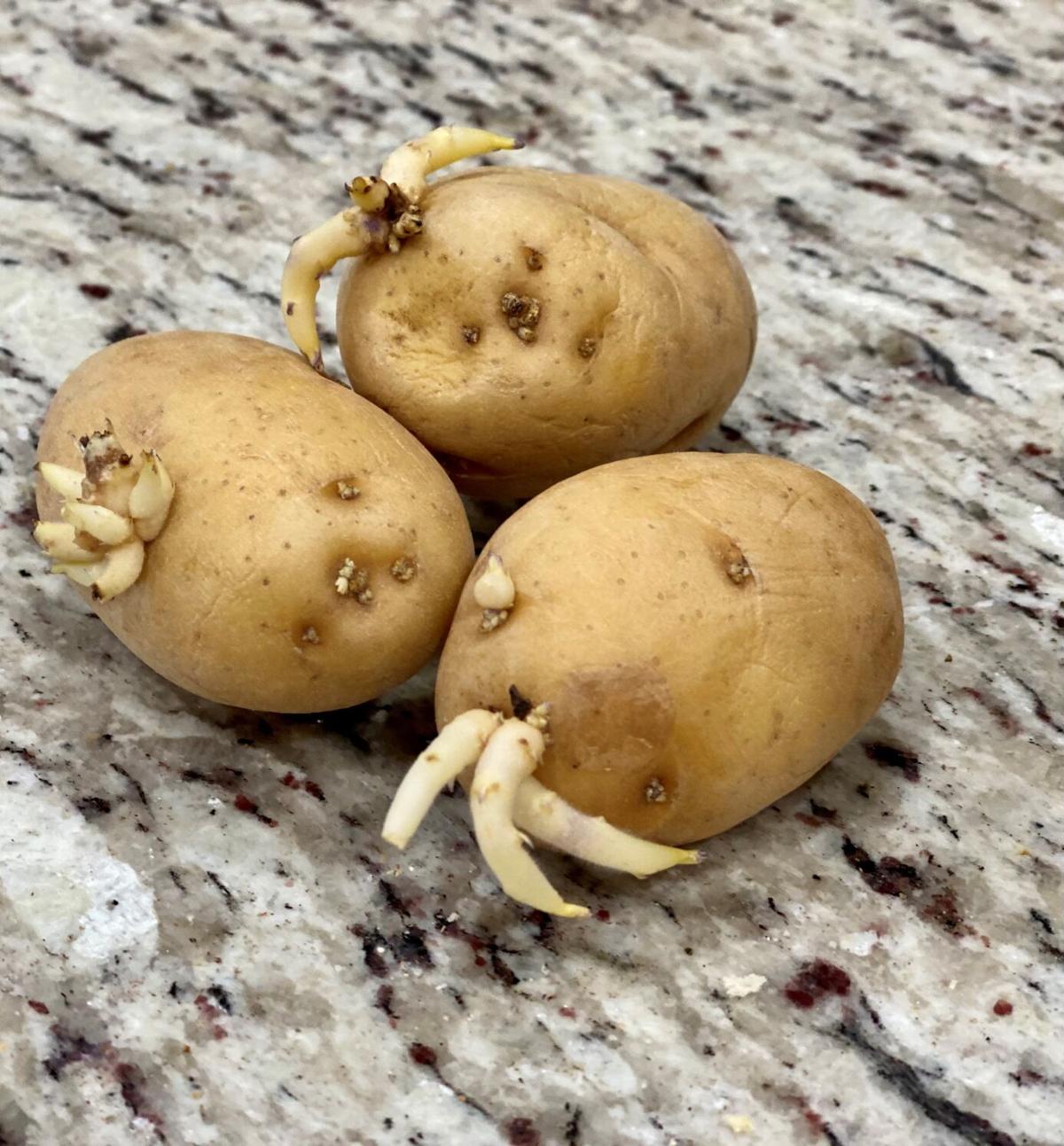 To grow potatoes, cut seed potatoes into pieces and allow them to heal for 24 to 48 hours. Be sure each potato seed planted contains at least one eye or bud from which the plant with grow.

Potatoes are ready for harvest when the leaves above ground turn yellow, then die.

To grow potatoes, cut seed potatoes into pieces and allow them to heal for 24 to 48 hours. Be sure each potato seed planted contains at least one eye or bud from which the plant with grow.

If you want to grow potatoes, it’s time to get them in the ground.

Potatoes are easy to cultivate and provide many essential vitamins such as calcium, iron, vitamins B6 and C and potassium. They also provide dietary fiber and some protein.

Potatoes can be started in south Louisiana through the month of February.

While many people believe potatoes originated in Ireland, they are actually from South America. According to Potatoes USA, the history of the potato dates to 8,000 to 5,000 B.C. with the Inca of Peru. When Spanish conquistadors conquered Peru, they carried potatoes back to Europe, where Sir Walter Raleigh eventually introduced them to Ireland in 1589.

The colonies of early America received their first potatoes in 1621 in Jamestown, Virginia, and the first potato farmers were thought to be Scotch-Irish immigrants.

Potatoes are the world’s fourth largest food crop following rice, wheat and corn, and they are an important agricultural crop in Louisiana — although maybe not as important as Louisiana sweet potatoes.

Potatoes are a cool-season vegetable great for growing in late winter into the spring. The edible portion of the plant grows underground and is known as a tuber.

There are several good varieties which can typically be found in local nurseries, according to Kiki Fontenot, a vegetable specialist with the LSU AgCenter.

For a good white potato with brown skin, she recommends Kennebec because it is reliable and easy to find. She also recommends red-skinned varieties Red LaSoda and La Rouge, and for yellow potatoes, Yukons are the best. There’s also LaChipper, a white-skinned potato.

Be sure to use certified seed potatoes, which are generally more disease resistant and reliable. Before planting, cut the potatoes into smaller portions and allow them to heal over for 24 to 48 hours before planting.

The bigger the piece, the better. Make sure you cut the potatoes to contain at least one eye or bud from which the new plant will grow. Aim for two to four eyes. Plant in full sun in loose, well-drained soils to avoid root rot.

To plant, dig a shallow trench about 4 inches deep, place seed potatoes about 12 inches apart and then cover completely. Plants do not have to be planted with the eyes point up, as the shoots will find their way to the surface. Mulch heavily with leaves or other straw material to prevent weeds. Avoid using herbicides. Plants will grow 2-4 feet high above ground.

Well-drained soils with good organic matter and adequate water is all you need. You can use a preplant slow release 13-13-13 general fertilizer followed by another light application after plants bloom. Potatoes prefer more acidic soils with a pH of about 5.5 but will tolerate slightly higher pHs up to 7. Organic fertilizers and compost are another great amendment to provide nutrients.

Potatoes also can be seeded in containers. Use 5-gallon or larger containers to allow tubers to form. Use a good potting media for best growth.

Potatoes are susceptible to plant pathogens, such as early blight and late blight, the two most common diseases. Both can be controlled with good cultural practices: don't water overhead and keep foliage dry. Fungicides containing the active ingredients chlorothalonil, copper and mancozeb also work.

Tubers begin to form when plants start to flower. A light frost should not hurt the plants, and a hard freeze will only affect the tops of the plants and delay the harvest.

When leaves begin to turn yellow and die — about 90 to 100 days after seeding — the plants have reached maturity and are ready for harvest.

To check for maturity, Fontenot suggests digging a few tubers and rubbing your thumb across the potato to see if its skin slips off easily. If it does, the potato is not ready. Wait several days before digging if possible.

To harvest, dig wide to avoid damaging potatoes in the soil, and use a spade or shovel to dig near the drip line of the plant. Gently pull the plants by their tops and shake soil from the potatoes.

Store potatoes in a cool, dark place (above 40 degrees) with high humidity. Ideal storage conditions are 60 to 65 degrees with 85% relative humidity for 10 days. Store long-term thereafter at 40 to 45 degrees. Properly stored potatoes can be planted again in mid-August through mid-September.