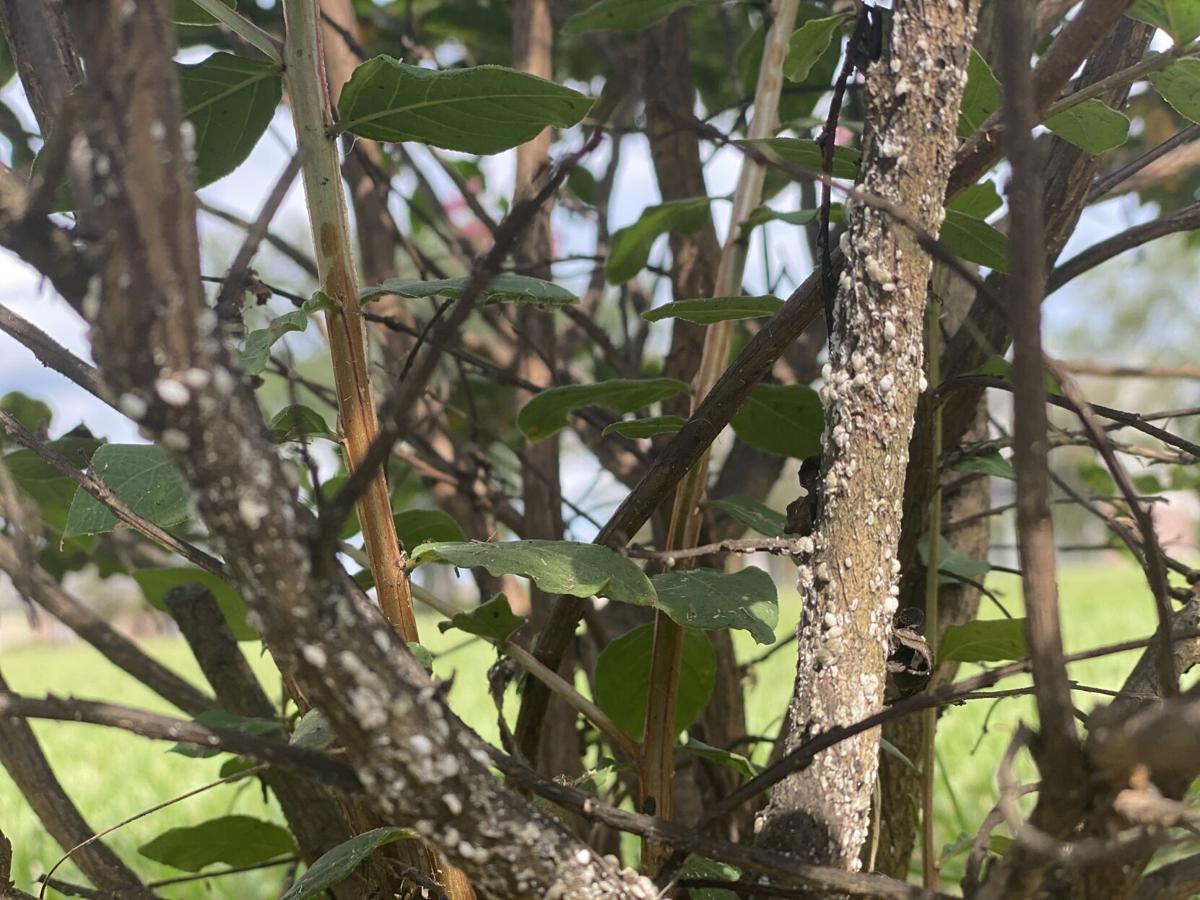 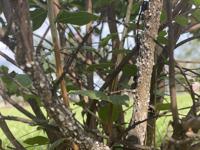 Crape myrtle bark scale is found on the tree's trunk and branches. 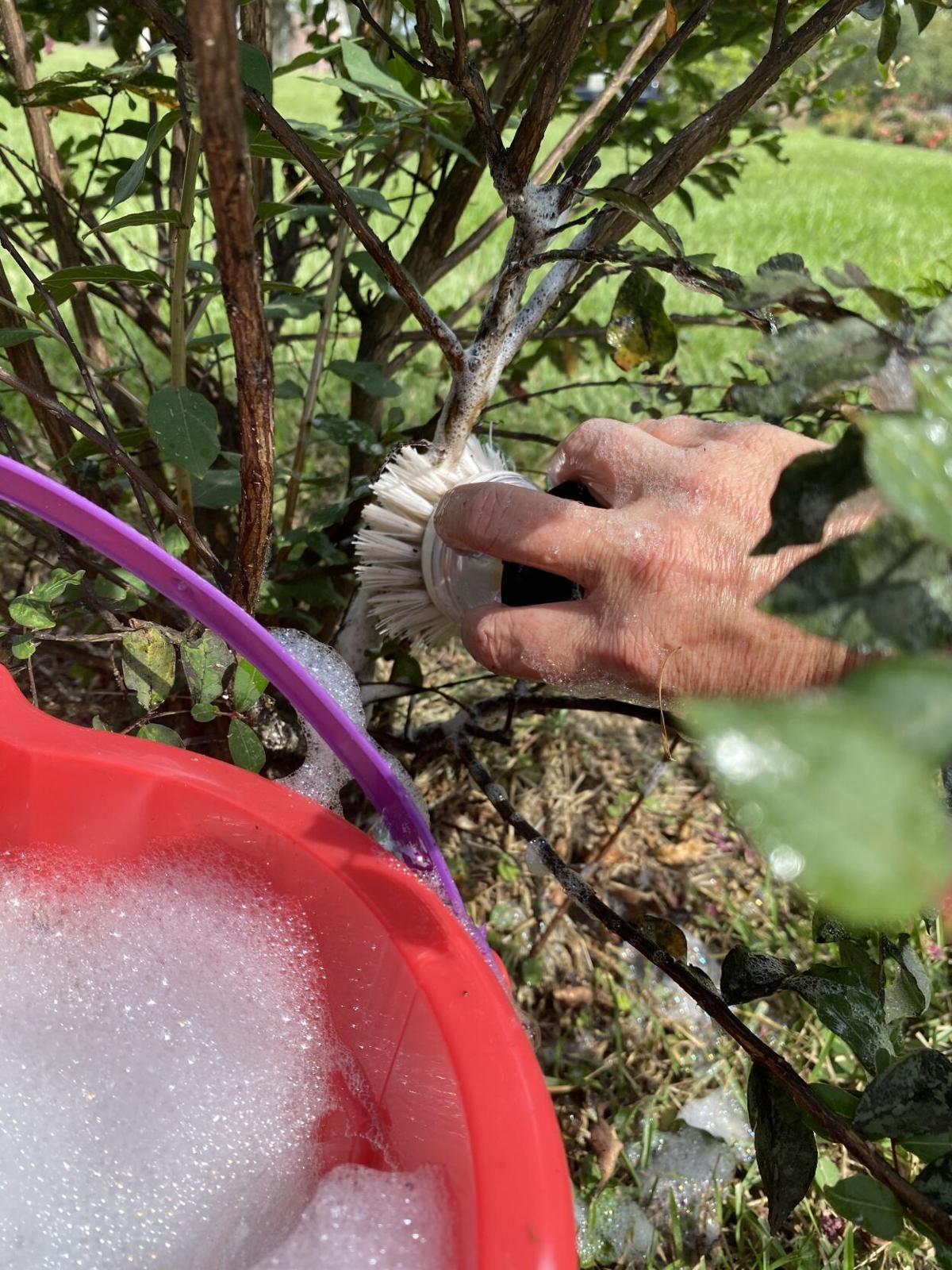 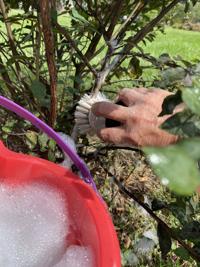 Use a soapy mixture with a soft brush to wash scales off crape myrtle trees.

Crape myrtle bark scale is found on the tree's trunk and branches.

Use a soapy mixture with a soft brush to wash scales off crape myrtle trees.

It first showed up in Texas in 2004 and made its way across the Gulf states. Now, crape myrtle bark scale can be found as far west as New Mexico, as far north as Kansas and as far east as Virginia. It is most prevalent in Texas and Louisiana.

The pest, which came here from Asia, usually goes unnoticed until plants begin to turn black.

The small insects are flat and round or oval. They are often soft-bodied, although hard-bodied scales also exist. They are difficult to detect because the adults attach themselves to the trees and become immobile.

Crape myrtle bark scale also can be found on other common landscape plants such as American beautyberry, little leaf boxwood, cleyera and privet in addition to fruits such as pomegranate, persimmon, raspberries and figs.

Crape myrtle bark scale can be found where the name implies — on the bark of the trees — and rarely on the foliage. An overall infestation appears as white to gray in color.

The scales produce large amounts of sugary waste called honeydew by sucking sap from the phloem of trees and shrubs with their piercing-sucking mouth parts. Black sooty mold or fungus then grows on the honeydew, covering the leaves and branches of the tree in the telltale sign of the pest.

There are several ways to help control or eliminate scales; however, it is not easy with a heavy infestation.

Natural predators such as lady beetles and mealybugs are highly effective in large enough numbers. You can also scrape off the scales or use a high-pressure water hose to spray them off, being careful not to harm the tree.

A soapy water mixture composed of dishwashing liquid (1½ teaspoons per quart of water) or an insecticidal soap and a soft brush can be used to scrub the insects off of limbs and branches that you can reach and simply rinse them away.

Or you can spray the solution, reapplying every five to seven days as needed, covering both sides of the leaves. Leave the solution for several minutes and then rinse the soap and bugs off. Do not apply on a hot, sunny days or you could burn the tree. While hard to do on very tall trees, this treatment is effective on smaller ones.

Horticultural oil sprays can be applied when temperatures are above 45 degrees and below 90 degrees. Always spray in the late evening to slow drying time and increase effectiveness.

Finally, you can use a chemical control with active ingredients such as acephate, bifenthrin or imidacloprid. Apply it by spraying directly on the scales or wiping them with a paint sponge, being careful to wear chemical-impermeable gloves. As always, follow directions on the labels and apply in the late evening to reduce the impact on pollinators. These treatments may need to be repeated to control newly hatched immature crawlers.

The most effective treatment for heavy infestation is drenching the soil with a systemic insecticide with the active ingredients dinotefuran, imidacloprid or acephate. These insecticides, however, can have harmful effects on pollinators that feed on the pollen and nectar when trees are flowering.

Scale insects are invasive and will infest other plants, so move infested plants away from healthy ones. Unfortunately, sometimes it is best to completely remove and destroy heavily infested plan