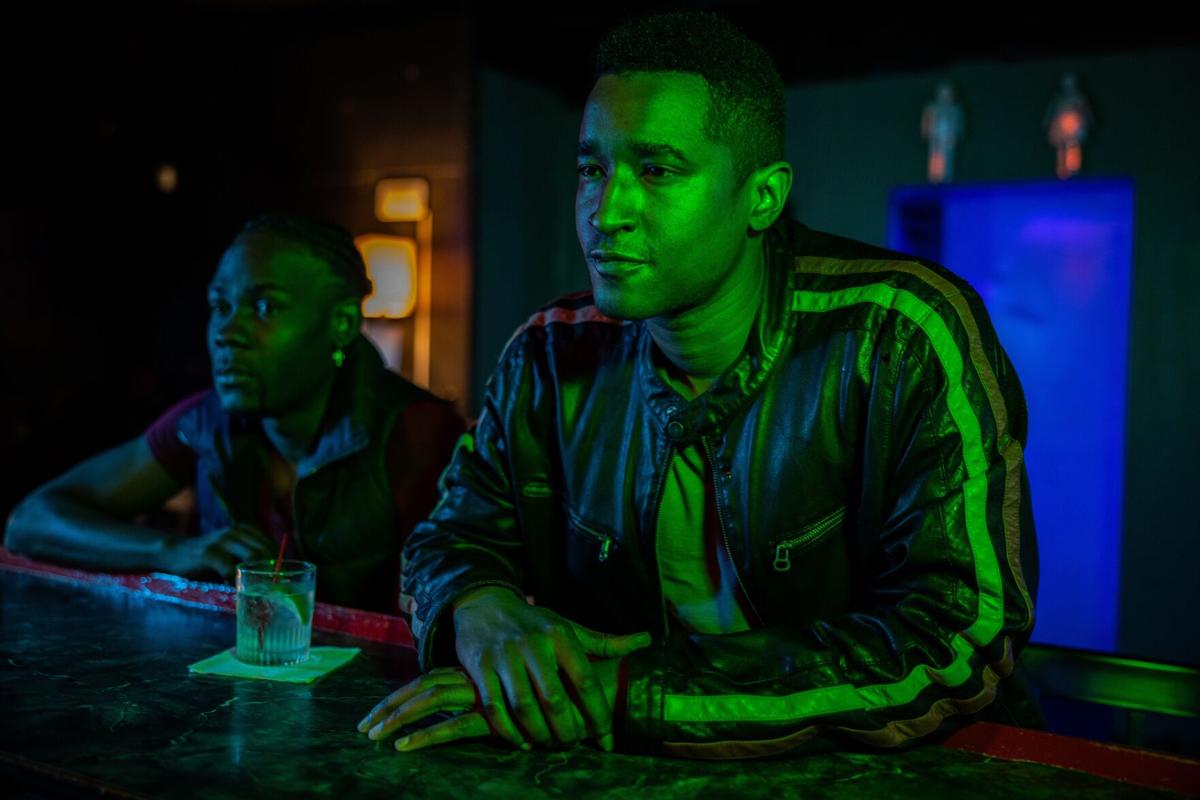 In a scene from 'Grits,' actors Aaron Hebert, left, and Joshua Leonardo are trying to make their relationship work when they come from two different worlds in their gay community. 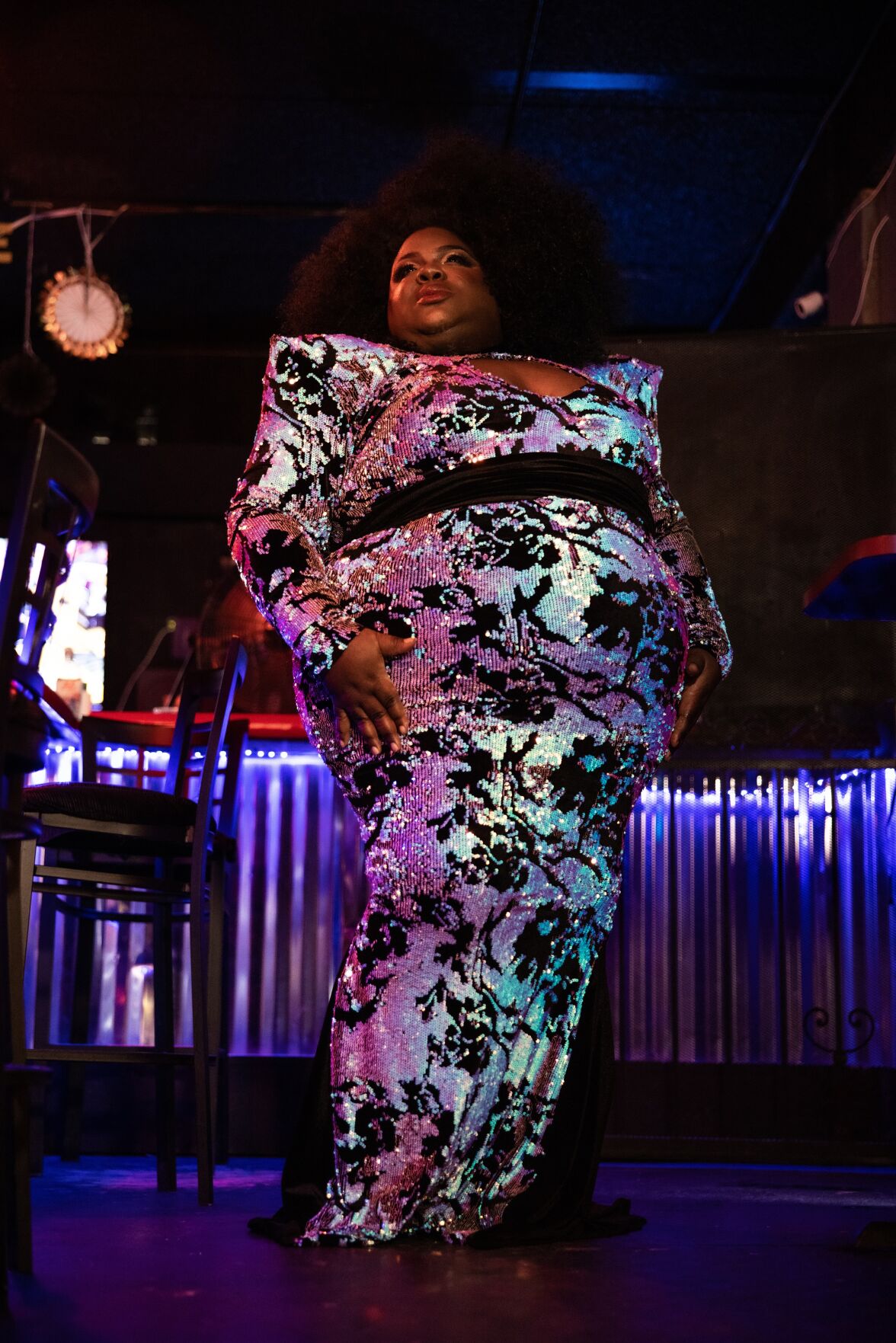 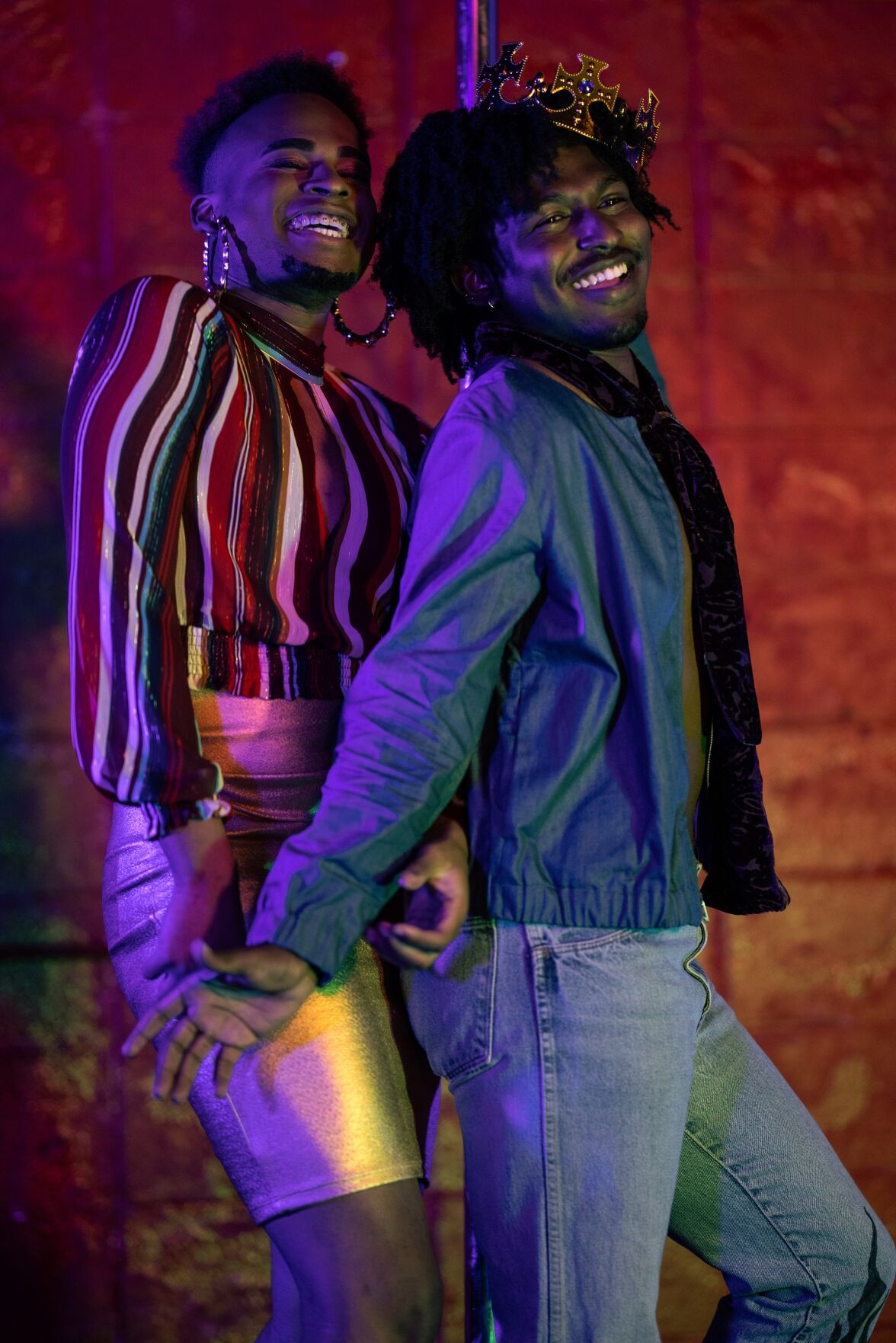 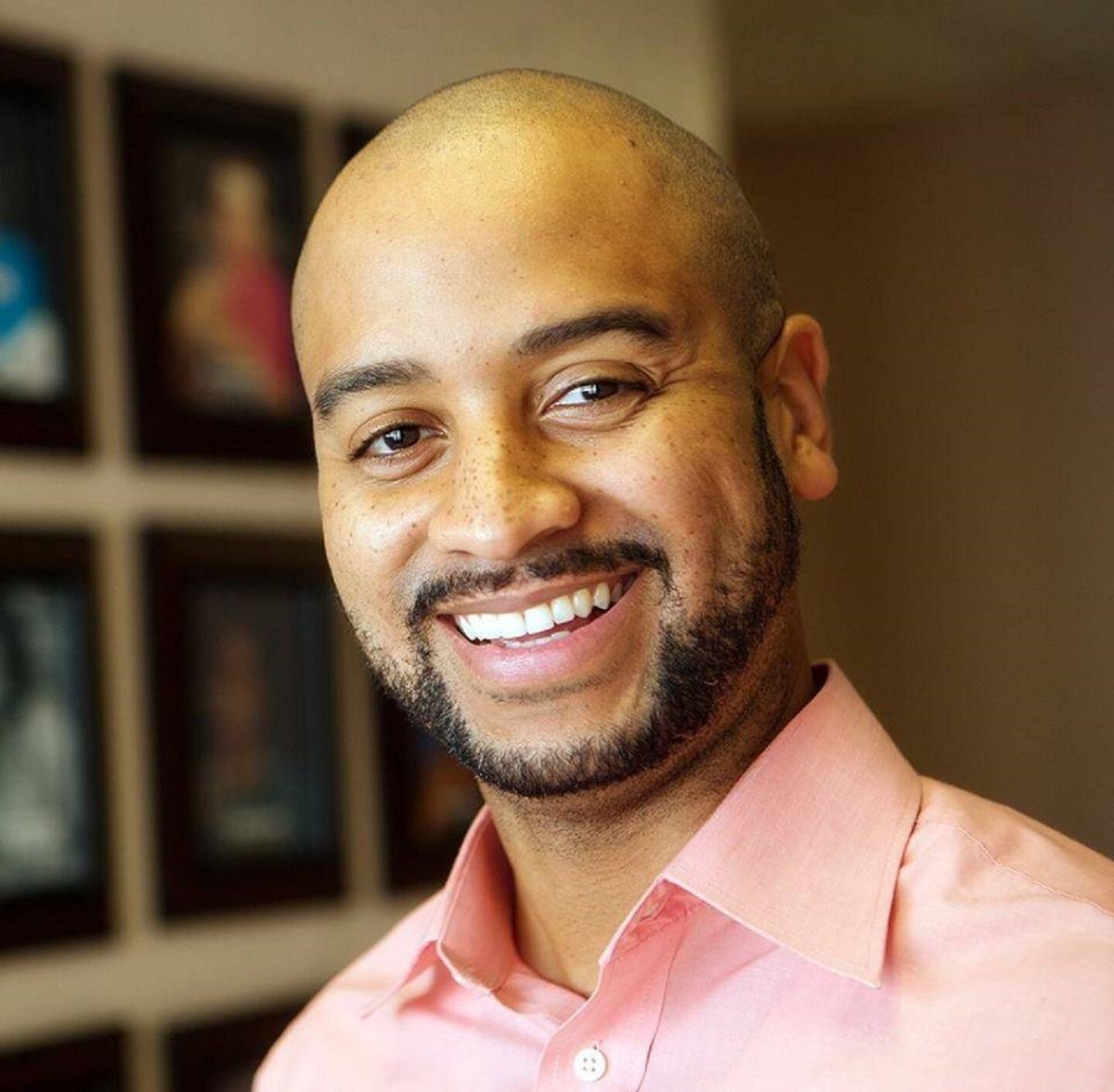 In a scene from 'Grits,' actors Aaron Hebert, left, and Joshua Leonardo are trying to make their relationship work when they come from two different worlds in their gay community.

Greg Williams Jr. has a simple request for those who choose to watch his new by-subscription web series: Remove your preconceptions and open your hearts and minds.

"Grits" or "Black Gay Men Raised in the South" celebrates the local Black LGBTQ+ community — warts and all.

Williams, who is executive artistic director of New Venture Theatre, directed, produced and wrote the first season's eight episodes, each about 30 minutes, and all available for streaming at HoodooHouseTV.com.

"'Grits' brings queerness to the forefront without shying away from the taboo," said Williams, 38.

Williams said he was raised in Baton Rouge and wrote of his experiences growing up gay here. But the series is set in Plaquemine.

"I wanted to isolate these characters as much as possible. Basing them in Plaquemine made the Sugar Factory, their only affinity space in the city, so important. It also enhances their need for family and community. We all need someone!" he explained.

Of his experiences he said: "For me, growing up Black and gay in the '90s was rough. It was a joke to everyone. Churches wanted you in their choirs and praise dance teams, but dared you to express that thing that made you so special anywhere else. Every day you woke up being told you would go to hell. I have been bullied, threatened, been shot at with a paint ball gun outside a club, had men in trucks pull up next to me and scream the "faggot" word to me, and somehow … even with all of that … I survived.

"There is a strength in that. There is joy in that survival. There is also a reason why I did survive when so many didn't. I had to recognize that. I want to let other Black LGBTQ+ folks know that joy and let them know they are not alone!"

Here, Williams discusses the ambitious production and what it means to his community. The interview has been edited for space and clarity.

Hoodoo House TV is your new company. Tell us a little bit about it.

Yes, this is a new company. I wanted to write a love letter to my community, my second family — Black gay men raised in the South who are boldly and brilliantly thriving and surviving at the same time. "Grits" is my response to noticing a lack of representation of the Southern Black gay man in the Deep South, and I am so honored to be able to share it with everyone.

When did you start writing "Grits," and what inspired you to put this out there?

I attended a national theater conference, and there was a panel on LGBTQ+ new works in theater. I was excited to participate; however, I only heard about plays telling stories from New York, Los Angeles and other metropolitan cities. It blew my mind that nobody was writing for the South. In my mind, I kept saying, "all this seasoning we have in the South to make beautiful, bold characters, and nobody is writing US?!!! Then I will!" "Grits" is a mixture of my journal entries over my years of growing up in the South as a Black, gay man. It is also a mixture of me sharing my experiences growing up in a "gay family." I guess this would be similar to the "families" represented in the FX series "Pose." (The drama/dance musical is set in late 1980s and early '90s New York and centers on the gay and trans community, the AIDS crisis and capitalism.)

When did production start, and what shooting locations might we recognize?

The first season started filming in January, right smack in the middle of the pandemic, so you can imagine how difficult it was. We kept the cast in a bubble for three months, and we mostly used my house and cast members' homes for filming locations. I must say, the cast of "Grits" is mostly a part of the Black gay community. Having that luxury as a director/producer created a dynamic support system that helped the show really get off its feet. If we lacked anything during filming, someone jumped up to provide the need. It became more than just a cast and crew … it became family on a mission!

How large was the cast and crew?

This was a massive cast of 20! Most web series focus on no more than five characters; however, I was telling the story of a community. I could not do that without the representation of the community. We needed drag queens, transgender brothers and sisters, gay men, lesbians, and non-gender conforming folks. We needed all the ingredients or the recipe that I wanted would not come out right.

The series has a fair amount of language and adult themes. We realize this is to be as authentic as possible, but do you think it will scare away some potential viewers?

I struggled with this for a long time. Do I present what I want folks to know, or do I offer all of it? I've been a playwright for theater for over 15 years. I knew that "Grits" would have to be captured on film because of its rawness. As a playwright, I try to do my best and allow the characters to speak what they must, be selfish as they want, make mistakes and react when necessary. … I want them fully human. There were times I would cringe because I didn't want to write what the character was saying to me or doing in my mind, but I knew standing in the way would make that moment not authentic. I also had to remind myself that this was written so folks could get to know all of us. We gotta have the good, bad and ugly in there, or what is the point? I think many people will actually find they relate to a lot more than they thought they would when they watch it.

What do you want viewers to take away from the series?

I hate when people expect anything under the "Black art" umbrella to present some kind of trauma or struggle. There will be no discussions of HIV/AIDS or any of those things in "Grits." Not because they are not there, but because it is important to me that these characters thrive and survive with the joy that has been given to them. I wanted to see my people smiling and laughing more on film. We rarely see ourselves in a positive light. I wanted to see us find love, have sex, struggle with family issues, have financial stress and everything else that comes with any human getting out of bed in the morning.

Any anticipated date for the second season?

I've fallen in love with film. Don't worry; I can't wait to get back to the stage; however, Hoodoo House is already working on Season 2 of "Grits."

Any other projects in the works?

Yes. We have two new shows coming out this fall. The first is called "Sugga — the Web Series." After leaving her husband, Riley sneaks back home to Mississippi to confront her past, only to discover that you can take the girl out of the South, but you can't take the South out of the girl. This romantic comedy series follows the lives and relationships of four lesbian, Black women in the South. This one-of-a-kind original series tells the story of Riley, Frankie, Zora and Nest as they deal with relationships, build careers, and search for Ms. Right. It's "Sex & the City" meets "Soul Food," but gay, of course! The second show is called "DL., Inc — the Web Series." Confronted with a business proposition to build a company whose mission is to help DL ("down low," bisexuals who identify as straight) men in their city hook up while keeping their "tea" completely confidential, Junifer begins taking on clients whose needs make her question whether she's on the right side.

Terror grips Kendra Ellis-Connor as she waits in a police station for word on the whereabouts of her son — her Black son.