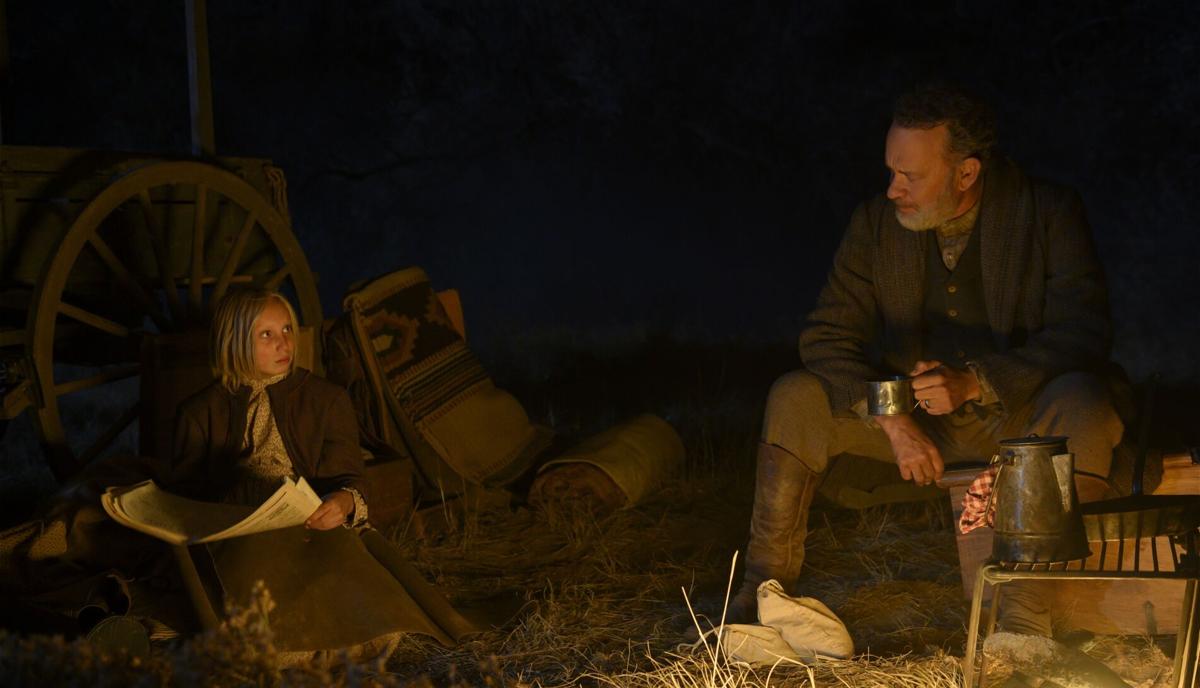 Helena Zengel) and Tom Hanks star in 'News of the World,' now showing in theaters.

Helena Zengel) and Tom Hanks star in 'News of the World,' now showing in theaters.

An epic set in 1870, “News of the World” is the first western in Tom Hanks’ nearly 100-movie career. Like classic westerns, it holds untamed landscapes, heroes and villains, chases and shootouts, and settlers, soldiers and Native Americans in conflict.

Hanks, an actor so adept at playing imperfect heroes, finds another one in Capt. Jefferson Kyle Kidd. Having portrayed many captains and honorable men — including the steadfast U.S. Navy officer in the Baton Rouge- and USS Kidd-filmed World War II drama, “Greyhound” — Hanks has earned his way into a classic Hollywood fraternity. Like John Wayne, James Stewart and Gary Cooper, he’s shaped an indelible screen identity.

Hanks exploits his signature warmth as Kidd, a former Confederate Army officer who travels through Texas, reading newspaper stories for illiterate audiences in frontier towns. A charismatic storyteller, Kidd commands listeners through his flair for presentation and regaling turn of phrase. He picks good stories, too.

In the Paulette Jiles novel upon which “News of the World” is based, Kidd enjoys his itinerant lifestyle. The movie alters him somewhat, keeping Kidd goodhearted, but adding a wounded soul, burdened, presumably, by whatever guilt-worthy deeds he did during the three wars in which he’s fought.

Top-flight contemporary filmmaking though this film is, it curbs the book’s humor and harder edges. Kidd, for instance, isn’t spreading word of the recently passed 15th Amendment, which states “the right to vote shall not be denied to any citizen on account of race, color, or previous condition of servitude.” Instead, his stories aim to astonish and entertain roughhewn Texans who, five years after the Civil War, are still reluctant to rejoin the United States.

On the move after a reading in north Texas, Kidd comes upon a trail of blood. The trail ends with an overturned wagon, a lynched Black man and a terrified but uninjured White girl dressed in buckskin. The hanging man was her escort to an aunt and uncle 400 miles away in the hill country near San Antonio.

“I want to go home,” the girl tells Kidd in the language of the Kiowa, a Native American tribe that’s being removed from Texas by the United States.

Kidd doesn’t speak Kiowa, but he tries to calm the traumatized child. Finding documents in the wagon wreckage, he learns she is 10-year-old Johanna Leonberger. Taken by the Kiowa when she was 4 during an attack on German-immigrant settlers, Johanna lived with her adoptive Kiowa parents until U.S. soldiers killed them.

The federal authorities Kidd finds show little interest in completing Johanna’s transport to her relatives. Unwilling to abandon the child, he accepts that responsibility. During their precarious journey through Texas badlands, Kidd and Johanna form a bond not unlike parent and child. He also realizes that she’s even more alone in the world than he is.

Despite the recurring themes in Hanks’ characters, he endows Kidd with fresh decency and vulnerability. Zengel’s ultra-focused performance as Johanna as well as finely drawn supporting characters, New Mexican scenery and new old-fashioned western storytelling qualify the effectively cinematic “News of the World” as another feather in Hanks’ filmography.

On a local note, too, area moviegoers may want to listen for a local reference near the film’s end.

‘NEWS OF THE WORLD’

MPAA RATING: PG-13 (Parental Guidance Suggested) Some material may be inappropriate for those under 13.

WHY IS THIS MOVIE RATED PG-13? For violence, disturbing images, thematic material and some language

'NEWS OF THE WORLD'

MPAA RATING: PG-13 (Parental Guidance Suggested) Some material may be inappropriate for those under 13.

WHY IS THIS MOVIE RATED PG-13? For violence, disturbing images, thematic material and some language

“Soul,” a beautiful rumination on the meaning of life, leaps to a high place among Pixar Animation Studios' modern-day classics. Writer-direct…