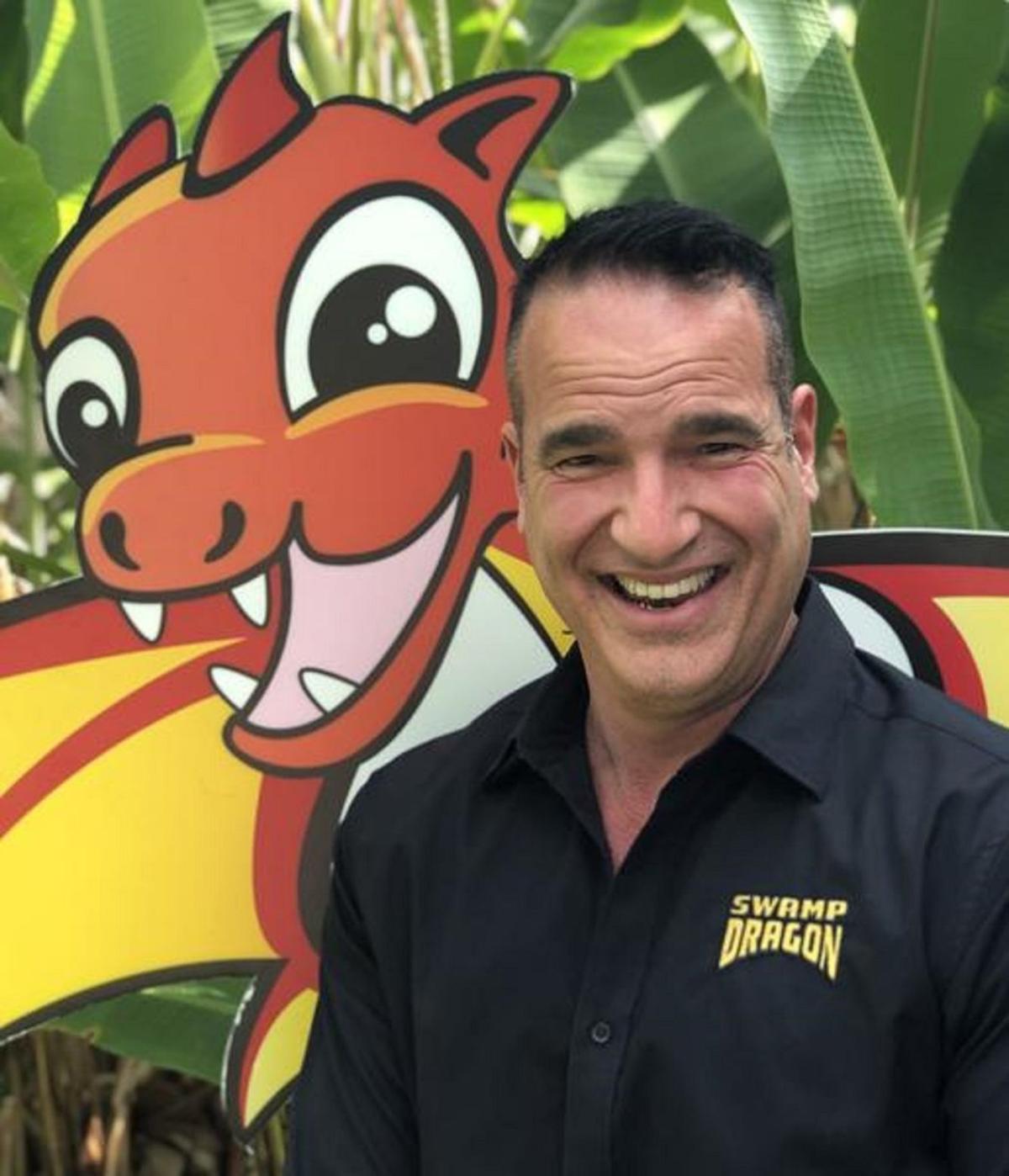 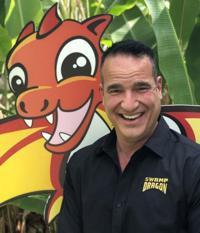 When Baton Rouge businessman Matt Beeson couldn't find a hot sauce without vinegar, he invented Swamp Dragon Hot Sauce, which is infused with rum, bourbon, vodka or tequila instead. 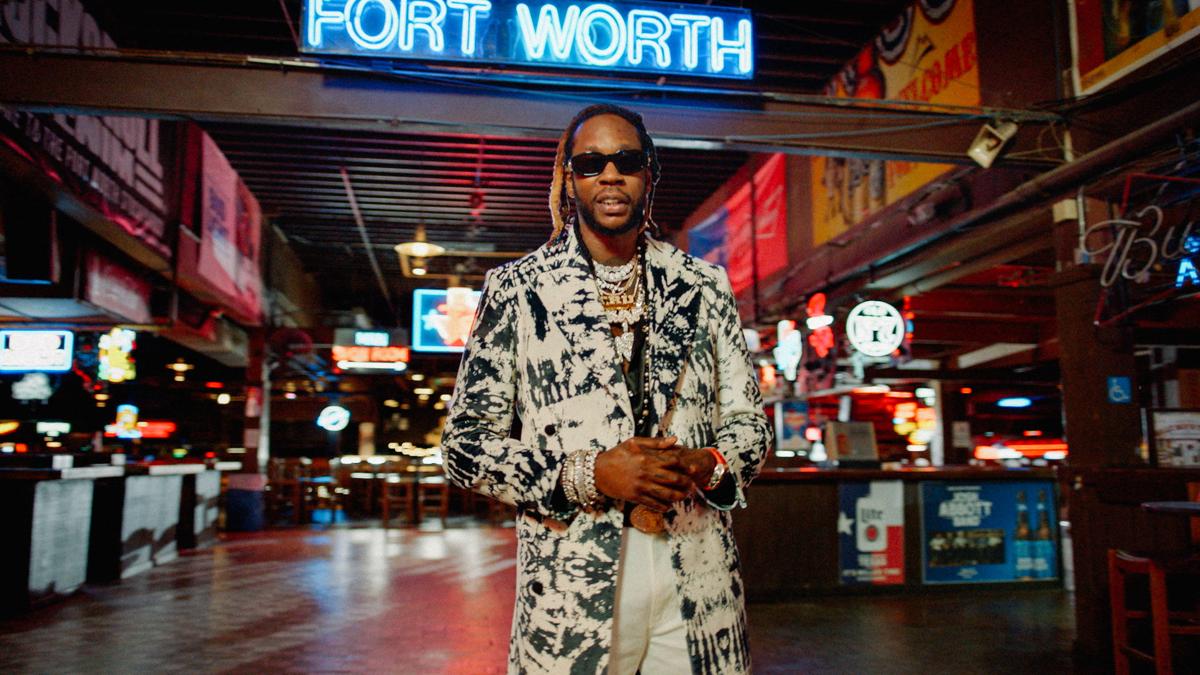 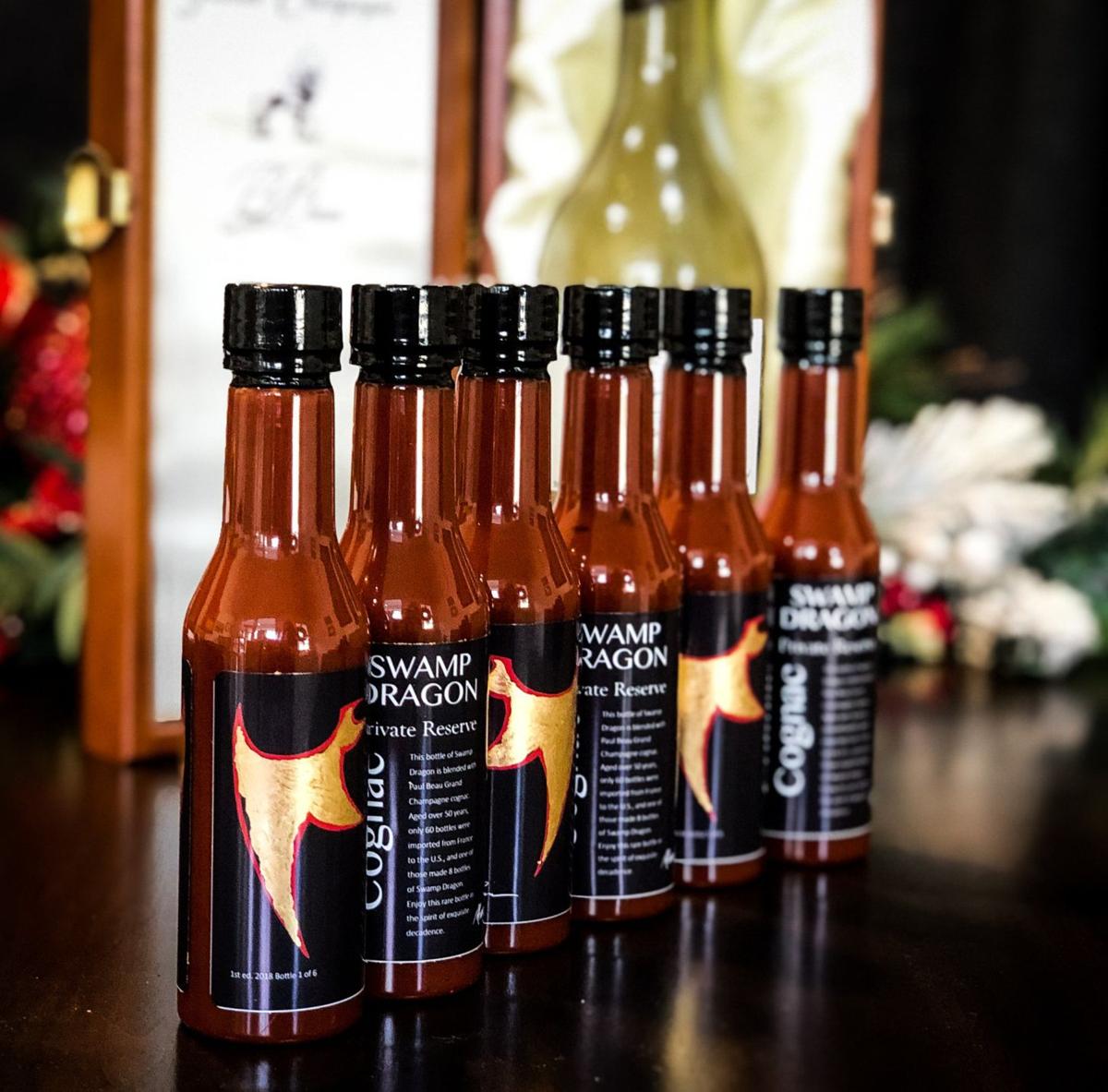 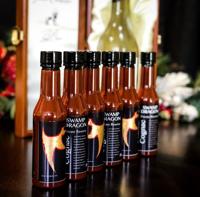 Matt Beeson's 1st Edition Private Reserve Swamp Dragon carried a $250 price tag. Now he's working on a second edition, made from $1,300 rum, that will sell for $500. 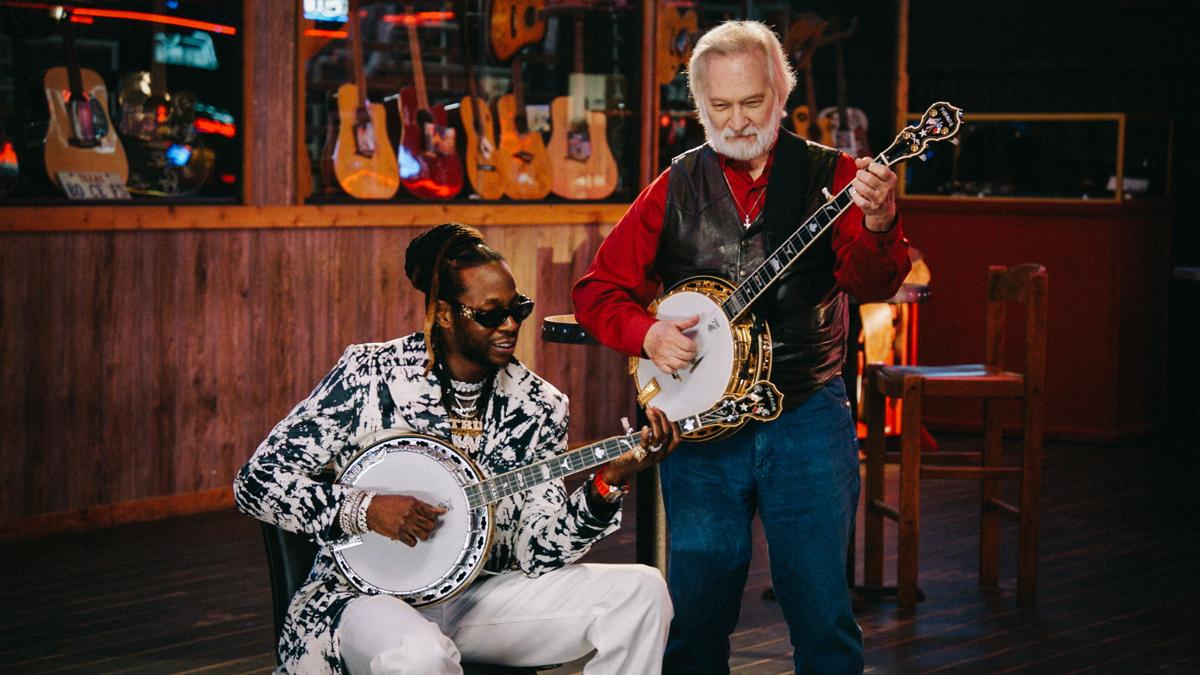 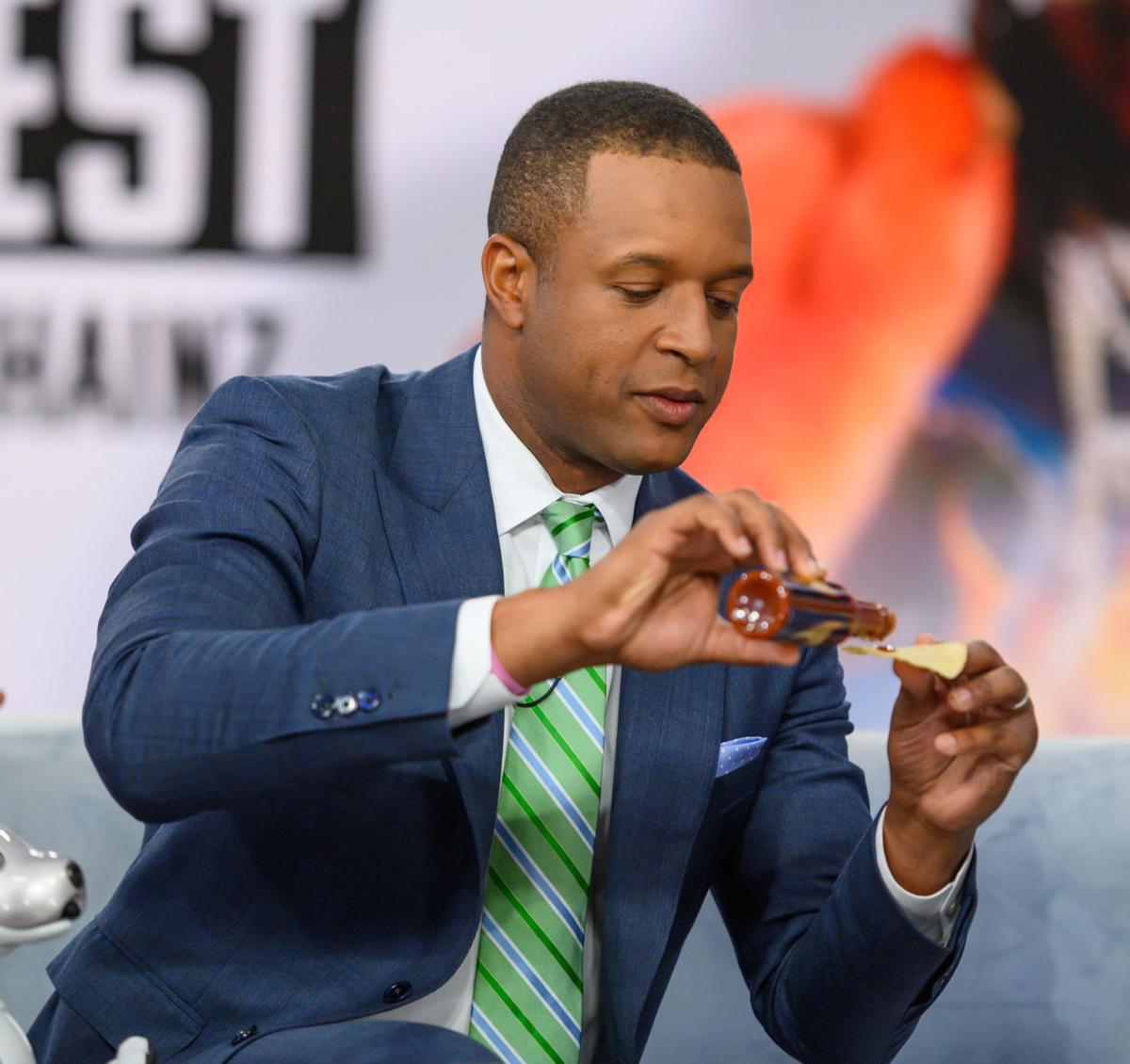 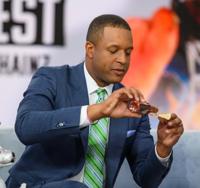 'Today' show anchor Craig Melvin samples  Swamp Dragon Hot Sauce on a chip during the morning show on July 25. The sauce is made in Baton Rouge.

When Baton Rouge businessman Matt Beeson couldn't find a hot sauce without vinegar, he invented Swamp Dragon Hot Sauce, which is infused with rum, bourbon, vodka or tequila instead.

Matt Beeson's 1st Edition Private Reserve Swamp Dragon carried a $250 price tag. Now he's working on a second edition, made from $1,300 rum, that will sell for $500.

'Today' show anchor Craig Melvin samples  Swamp Dragon Hot Sauce on a chip during the morning show on July 25. The sauce is made in Baton Rouge.

Matt Beeson likes it spicy, but no vinegar, please.

It was the 49-year-old Baton Rouge businessman's exhaustive, yet unsuccessful search for a hot sauce without the strong acidity of white vinegar that left him only one choice — create his own.

But what to substitute for the vinegar, the sauce's all-important preservative? Perhaps booze? Bingo.

"It works beautifully," Beeson said. "And Swamp Dragon presents, without question, a more complex flavor and aroma profile, and, at 16 times less acid than the market leader, is the lowest-acid hot sauce (shelf stable) in the world."

The New Orleans native's Swamp Dragon Hot Sauce has been on the market for 2½ years, and comes in vodka, bourbon, rum and tequila flavors that sell for $5.99 a bottle.

So how did Beeson end up on Tuesday night's episode of the Viceland series "Most Expensivest" alongside host, rapper and songwriter 2 Chainz? Beeson concocted something special.

The grassroots entrepreneur started with a $540 bottle of Champagne cognac imported from France, aged over 60 years and purchased in New Orleans. Mixing his secret blend of fermented pepper puree with the cognac in 80/20 proportions yielded nine bottles of 1st Edition Private Reserve Swamp Dragon that carried a hefty price tag: $250 a bottle.

That's what 2 Chainz will take a whiff of on the show, filmed in January at Billy Bob's Texas, the world's largest honky tonk, in Fort Worth.

"That name alone scares the hell out of me," 2 Chainz tells Beeson, who's quick to explain the company's mascot is a baby dragon named Marvin.

During the episode, the stylish 2 Chainz, decked out in a black and white print jacket, white pants, lots of bling and a braided bun, will take in Billy Bob's live bull riding, scoot a boot at its line dancing lessons and play a $22,000 Deering banjo.

We caught up with Beeson to discuss his sauce and his "Most Expensivest" appearance. The interview has been edited for space and clarity.

How did this idea for your hot sauce evolve?

When we reach for a bottle of hot sauce, do we want peppers or do we want vinegar? I guessed (correctly) that vinegar is why we don’t have to refrigerate hot sauces. I later learned that it is a strong acid that kills mold and bacteria, and thus an effective preservative, but there had to be a way to break the unholy marriage of vinegar and peppers. Alcohol is likewise an effective preservative, and I thought that vodka, as an unflavored spirit, would allow the flavor of the peppers through, rather than just making spicy vinegar. Once that idea sparked, it was inevitable to imagine bourbon, rum, etc., as sauce bases.

How did you get the business off the ground?

After two years of personal research, I was unable to answer the question of whether liquor could indeed substitute for vinegar in a hot sauce. I finally consulted LSU (School of Nutrition and) Food Sciences and was assured the idea was sound. Those two years served as de facto market research, and I decided to start a company, knowing I had a completely unique product idea.

How large is the business now; how many employees?

Two of us work at it full time without pay — my niece Emily and me. Beyond that, my wife handles all of Swamp Dragon’s legal work as well as the onerous task of dealing with Louisiana’s sales tax collections. My in-laws are very excited about Swamp Dragon and volunteer for production, and we have a mix of volunteers and interns for production as well. I am looking forward to expanding aggressively and hiring permanent staff.

Where is the hot sauce made, distributed?

We produce at the LSU AgCenter Food Incubator but should have our plan for a facility build-out approved by the Louisiana Department of Health, and we should be moved into and be up and running in that modest facility in about a month. We have one national grocery distributor and are in over 300 locations, mostly around the Gulf South and North and Northeast. Four locations in Hong Kong also stock Swamp Dragon. We need traction with food service distribution and are working on that with great energy.

Explain the process of making the sauce.

We mix a custom secret blend of fermented pepper puree with liquor and bottle it up. Swamp Dragon is explicitly intended to reflect the major Louisiana brands — very few ingredients, as opposed to brands that add garlic, onion, blueberry, mango, eye of newt, wing of bat, etc. But the key difference is that using liquor rather than vinegar, the flavor of the peppers really comes through. More than just heat, Swamp Dragon completely lacks the bitter, sour and acrid flavor and smell of other sauces.

And what about the $250 hot sauce featured on the show?

I binged two seasons of "Most Expensivest" when I was invited on. The show is extremely funny and brilliantly produced. 2 Chainz’s timing is fantastic, and I was instantly a fan. But as the Swamp Dragon 5-ounce bottle retails around $5.99 (more expensive hot sauces abound), I decided to make the most expensive hot sauce in the world for the show. Unable to find anything for the right price point in Baton Rouge, I returned to New Orleans and went to Keife and Co. There I purchased a bottle of cognac for more than $600. Absolutely delicious, and utterly unique, its flavor profile is something like leather and mahogany but hot sauce. The first edition is sold out. The second edition is on the way, made from $1,300 rum, and those 5-ounce bottles will sell for $500 each. I hope to release it for the airing of the TV show.

Did you have any interaction with 2 Chainz?

Just for the taping. It was all done in one take, and he is exactly what you think. Smooth as silk, with a commanding presence and very courteous. His production crew was very professional and accommodating as well. The entire experience was a joy.

What is your best-selling sauce?

Of the four main blends (bourbon, rum, vodka, tequila), bourbon is No. 1.

Your product was recently featured on NBC's "Today" show. How did that go?

They requested a bottle of the 1st Edition Private Reserve, in conjunction with 2 Chainz’s appearance on the show promoting Season 3 of "Most Expensivest." I shipped the bottle up to them. Craig Melvin ("Today" anchor) took a bite (of a chip topped with the sauce) on air, and they said the name but sadly did not mention liquor. So it was kinda fun to watch, but it didn’t move the needle at all or really inform the public on what, exactly, Melvin was eating.

I’m not just the inventor of Swamp Dragon or just the owner of the company. I am Swamp Dragon’s No. 1 consumer. I love this stuff. It’s so liberating to finally have a hot sauce without vinegar, that I eat it like crazy (even on Rice Krispies Treats and baklava). I believed for a very long time that it’s against the divine plan to put vinegar on gumbo, red beans and rice, and most other foods. If I introduce acid to a recipe, I reach for fresh citrus. If I use vinegar, it better be an aged balsamic. I leave the white vinegar for grandma to clean windows and countertops. I think white vinegar clashes with and masks food flavors and aromas, whereas a touch of liquor — well, think sherry in turtle soup. Yum! And a subtle whiff of bourbon or tequila wafting up from your chicken and andouille gumbo is pure magic.