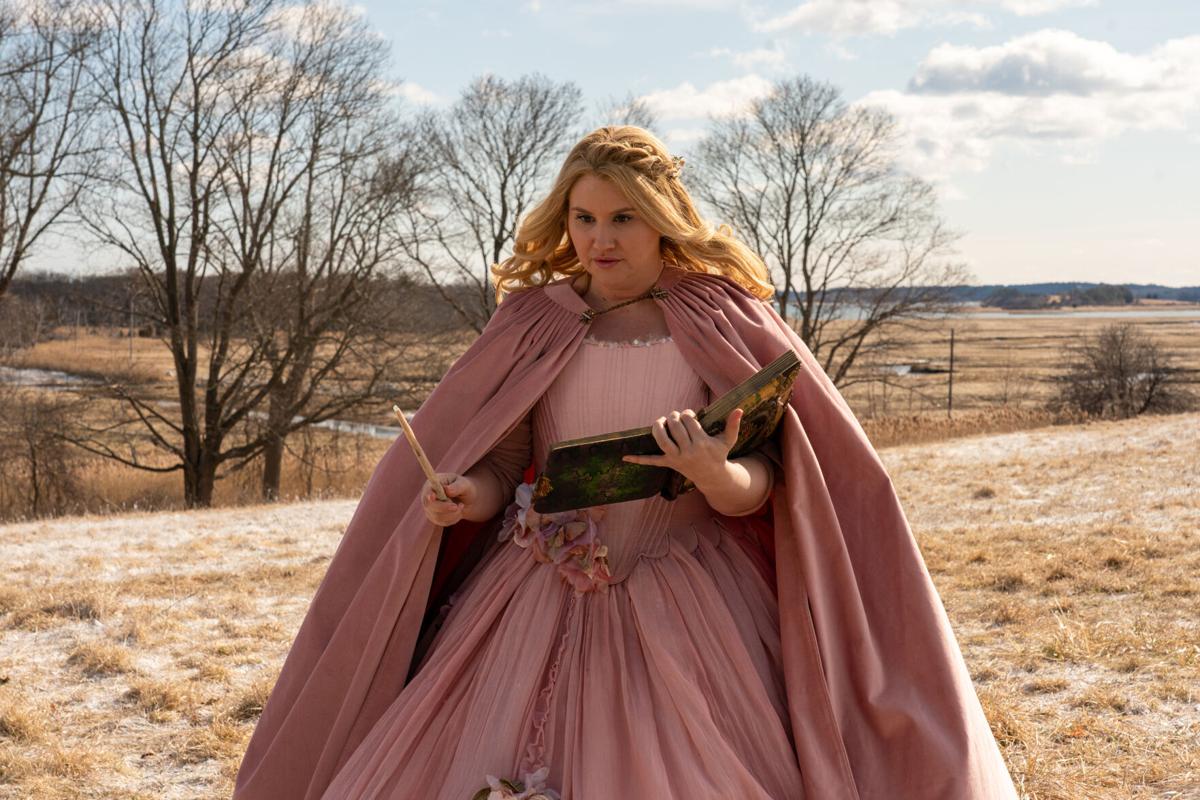 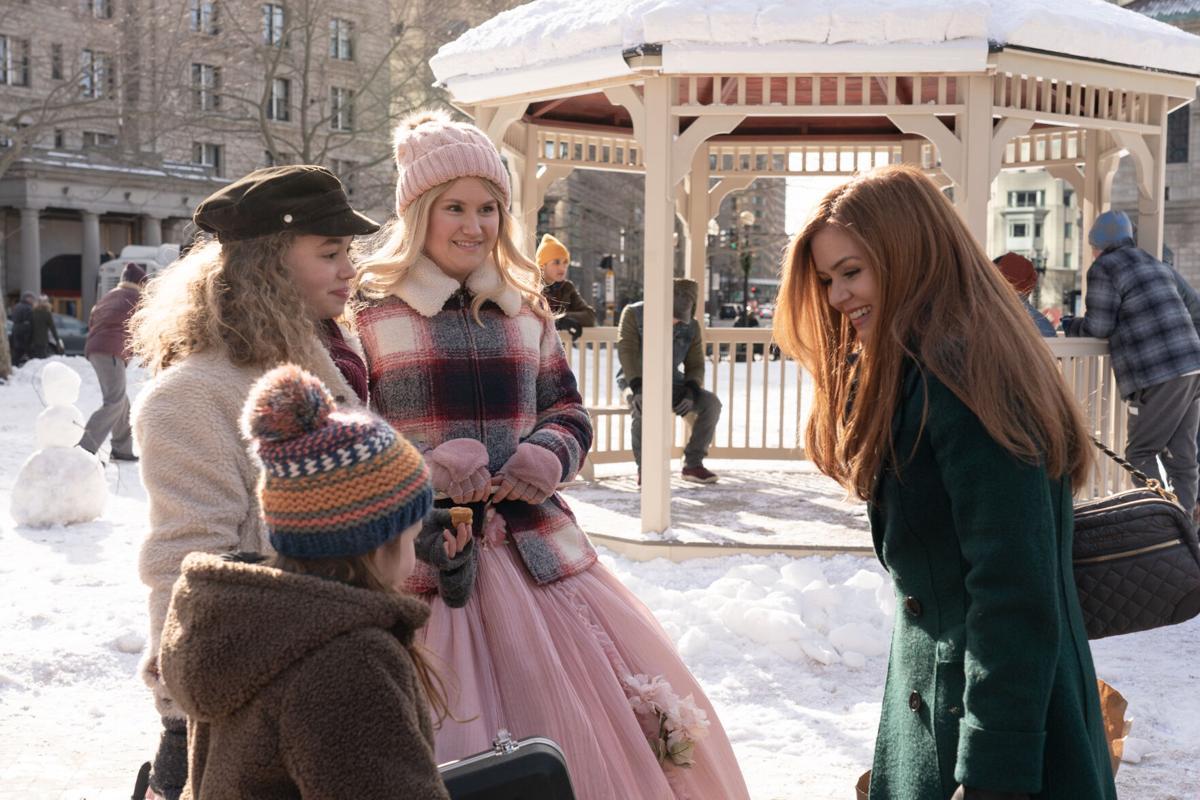 Willa Skye as Mia, Jillian Shea Spaeder as Jane, Jillian Bell as Eleanor and Isla Fisher as Mackenzie Walsh, from left, share a moment in ‘Godmothered.’

Willa Skye as Mia, Jillian Shea Spaeder as Jane, Jillian Bell as Eleanor and Isla Fisher as Mackenzie Walsh, from left, share a moment in ‘Godmothered.’

“Godmothered” begins as a sweet and funny fish-out-of-water comedy. Eleanor, a fairy godmother in training, is the fish. Modern-day Boston is the nonmagical land where Eleanor flails amusingly about. Centuries behind the times, she’s ill-equipped to succeed at her happy-ever-after assignment.

The Christmastime-set “Godmothered” is streaming on Disney+.

Portrayed with wide-eyed naivete by Jillian Bell (“Brittany Runs a Marathon”), Eleanor normally dwells in Motherland. In that magical realm, fairy godmothers attend fairy godmother school when they’re not on assignment in the human world.

Alas, a disenchanting funk has settled over Motherland, leaving most of the fairy godmothers in a dreary state. Even worse than the lingering malaise, fairy godmothers may be obsolete. As anyone familiar with Tinker Bell knows, fairies die when people stopping believing in them.

Because humans no longer believe in “happily ever after,” Motherland, like an underperforming department store in a dying mall, is approaching closure. Such a drastic development will force fairy godmothers to retrain as tooth fairies.

Corporate mindset is also afoot in the movie’s human world. Isla Fisher co-stars as Mackenzie Walsh, a single mother in Boston who works as a TV news producer. Distressed by burnout and a bullying boss, Mackenzie is unhappy at work and, in general, bitter about how her life has unfolded. Even during a white Christmas in New England, she’s decided there’s no happy-ever-aftering for her.

Back in Motherland, Eleanor, a happy contrast to her cynical classmates in godmother class, hasn’t given up on godmothering. She refuses to accept that she’ll likely never be a practicing, fulltime fairy godmother. Despite the pronouncement from the school’s headmistress, Moira — an inflexible villainess-lite played by Jane Curtin — that fairy godmothering is dead, Eleanor goes rogue to save the profession.

With the help of her sympathetic roommate, Agnes (the Oscar-nominated June Squibb), Eleanor bumbles her slapstick way to Boston. Determined to save fairy godmothering for future generations, she finds Mackenzie, the aforementioned woman in distress. A chronological glitch — Mackenzie’s plea to Motherland was mailed when she was 10, but now she’s 40 — is a fleeting detour for Eleanor.

Playing the inexpertly wand-wielding Eleanor, Bell shows her comedic skills as the well-meaning fairy godmother. Besides the laugh-out-loud scenes the always gown-attired Bell provides, she lights up her character with can-do resilience.

Directed by Sharon Maguire (“Bridget Jones’s Diary,” “Bridget Jones’s Baby”), “Godmothered” contains traces of the freewheeling romps those likewise female-led comedies are. And if only the film had a more coherent script, Eleanor may have become the antidote to 21st century cynicism and distrust she clearly was intended to be.

During its first act, “Godmothered” unreels a funny twist on the traditional fairytales that feature fairy godmothers who help downtrodden princesses find their Prince Charmings. In this revision, the fairy godmother gets at least as much screen time as the princess. It’s a good idea with much potential that, unfortunately, loses its way on the way to happily ever after.

Never truly finding itself, “Godmothered” piles a closet full of ideas into a script that backs itself into a corner, forcing square pegs into round holes.

Following the movie’s all-is-lost scene, a great Disney tradition, the film’s awkward storytelling does backflips, vainly grasping for the satisfying end it can’t find. Ham-fisted script machinations smack of bait-and-switch deception. Belabored and uninspired, the ill-fitting pieces that derail the third act equal self-sabotage. That’s regrettable because, before its fairy dust dissipates into the cold Boston night, “Godmothered” is an almost magical delight.

WHY IS THIS MOVIE RATED PG? For some suggestive comments.

WHY IS THIS MOVIE RATED PG? For some suggestive comments.

“On the Rocks” adds another poker-faced rascal to Bill Murray’s gallery of comic rogues.