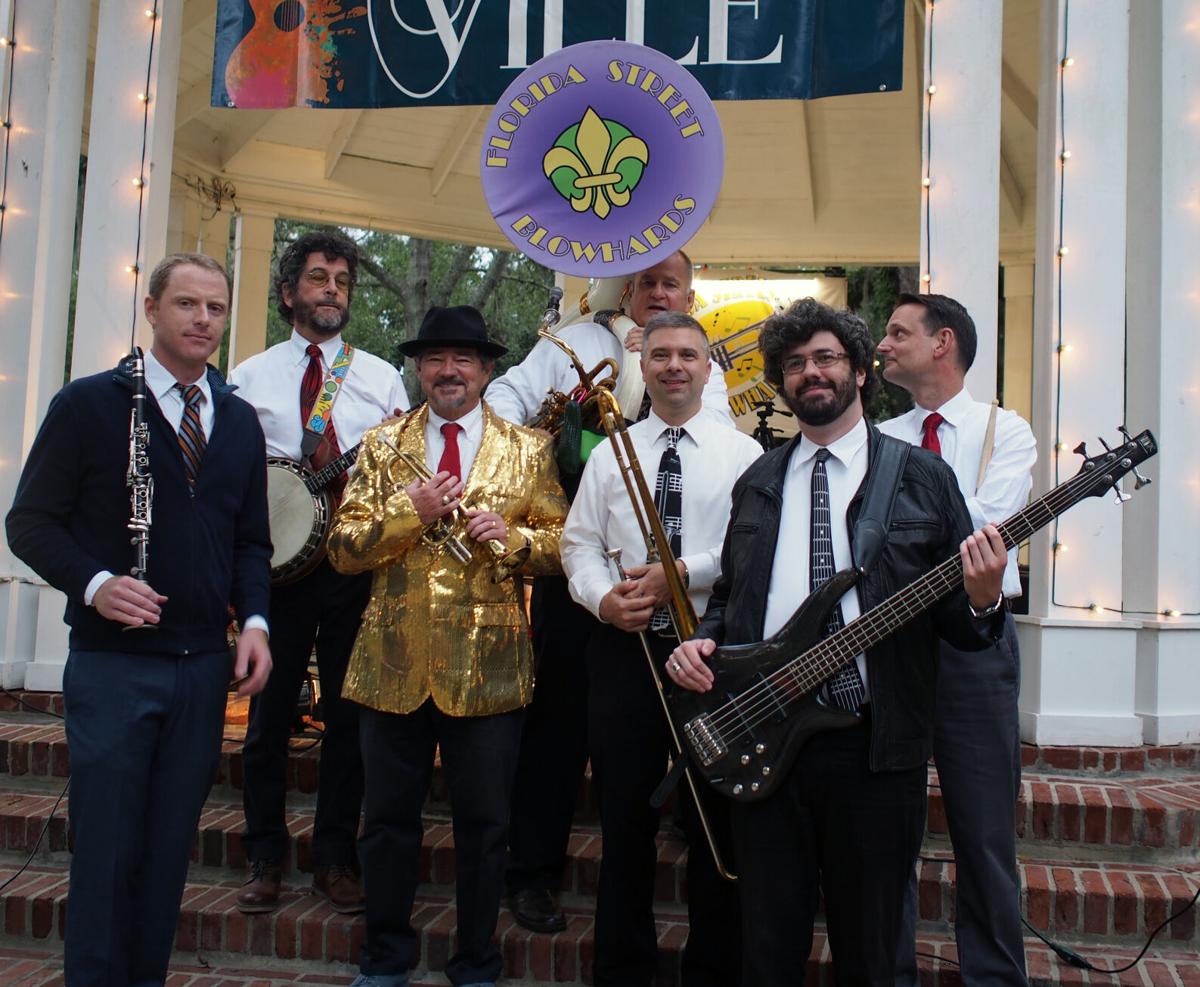 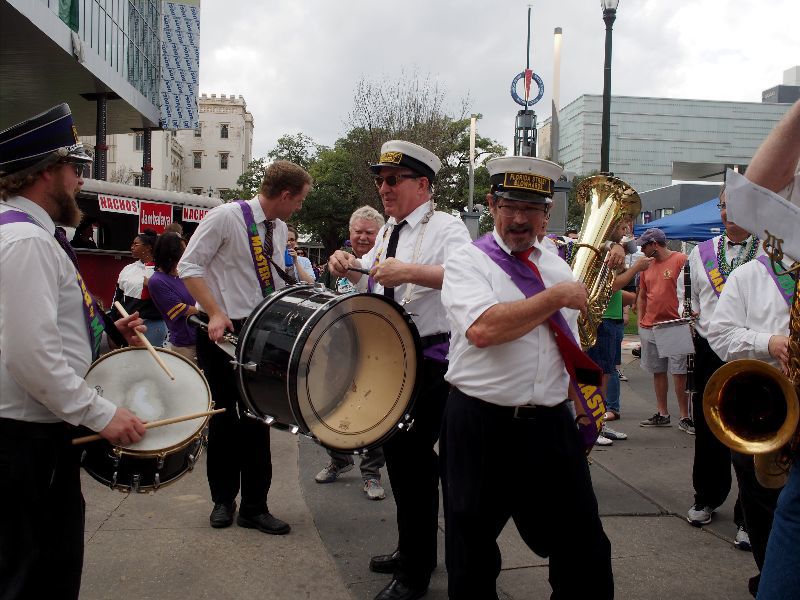 The Florida Street Blowhards made their public debut in 2016 at Poor Boy Lloyd’s, the downtown restaurant at the foot of Florida Boulevard. 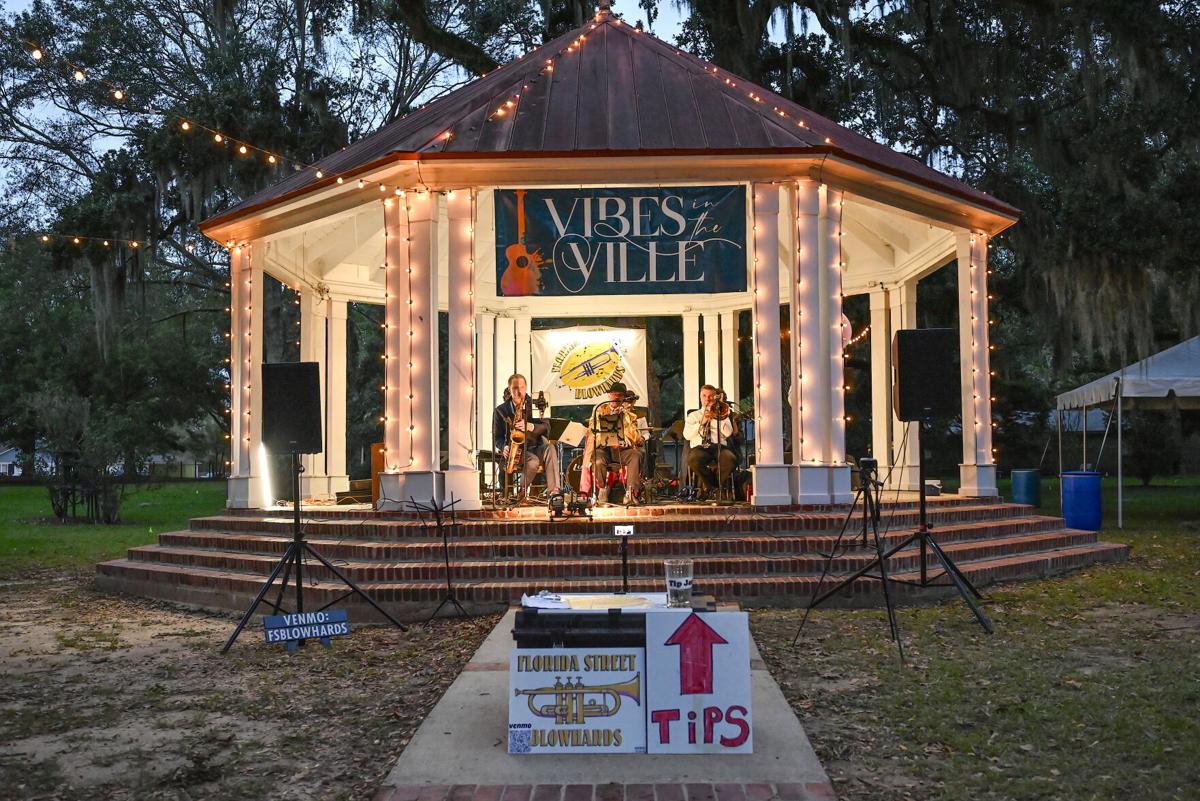 The Baton Rouge-based Florida Street Blowhards branched out to St. Francisville this year for a performance at Parker Park for Vibes in the Ville.

The Florida Street Blowhards made their public debut in 2016 at Poor Boy Lloyd’s, the downtown restaurant at the foot of Florida Boulevard.

The Baton Rouge-based Florida Street Blowhards branched out to St. Francisville this year for a performance at Parker Park for Vibes in the Ville.

Sam Irwin instigated the Florida Street Blowhards in 2016. A trumpet player during his school days and early adulthood, Irwin had only recently begun playing the horn again.

On Nov. 11, 2015 — the day after songwriter, pianist and producer Allen Toussaint died following a concert in Spain — Irwin’s search for lesser-known music by the New Orleans maestro brought him to Toussaint’s 2009 recording of Sidney Bechet’s “Egyptian Fantasy.” Nicholas Payton plays trumpet on the track.

“I didn’t even know it was Nicholas Payton,” Irwin recalled. “I just heard this trumpet playing, and it was a really cool sound and a distinctive tune. I thought, ‘Gosh. He’s making that sound so easy. I can play that.’ But I hadn’t played my horn in 30 years.”

Irwin’s return to trumpet became a respite from deadline writing for his second book, “It Happens in Louisiana: Peculiar Tales, Traditions & Recipes from the Bayou.” And after practicing alone for four months, he asked via social media if anyone was interested in playing music along the lines of “Egyptian Fantasy.” David Seymour’s wife responded, volunteering her then musically inactive husband. Originally a saxophonist, Seymour was interested enough to take up clarinet, a key instrument in traditional jazz.

“Before I met Sam, I expected to be done playing music,” Seymour said. “I was almost considering selling my sax.”

“David and I started practicing with play-along stuff CDs,” Irwin said. “At the time, I didn’t even know that what I was playing was called traditional jazz.”

Following months of Saturday rehearsals in 2016, the Florida Street Blowhards made their public debut on a Saturday afternoon at Poor Boy Lloyd’s, the downtown restaurant at the foot of Florida Boulevard. The players dressed in traditional New Orleans jazz-band style: white shirts, ties and black pants.

“Nobody was there,” Irwin said. “But I had a vision that we’d become a band that played in one location every Saturday for 20 years, and people would know us far and wide.”

Despite the underwhelming turnout for the band’s first show, the Florida Street Blowhards later established monthly gigs at Poor Boy Lloyd’s and Curbside Burgers. But every gig, for just about every musician everywhere, ended after the COVID-19 pandemic closed music venues and restaurants.

A few months into the pandemic, Irwin got the idea of playing outdoors. The band played the first of 42-and-counting outdoor shows in the Glasgow Middle School parking lot on a Sunday afternoon.

“Some people stopped and listened, and the front-yard concerts were born,” Irwin said. “In the early days of the pandemic, people needed to get out of the house. And they were attentive and applauding after the songs. When we play in a club, sometimes we end up being background music. But at a front-yard concert, they’ve come to see us. That’s rewarding.”

Many people know Irwin from his previous musical life as owner of Paradise Records. He began working at the indie record store in the University Shopping Center in 1986 and bought the business in 1995. Irwin closed the store in 2001, after illegal music downloading crippled physical music sales. He later worked as public information officer and press secretary for the Louisiana Department of Agriculture and Forestry and currently directs public relations for the American Sugarcane League.

The Florida Street Blowhards’ first booking at Chorum Hall, which opened in 2017, is an honor, Irwin said.

“When you consider the people who have performed at Chorum Hall, it’s a thrill to be invited there to play,” he said.