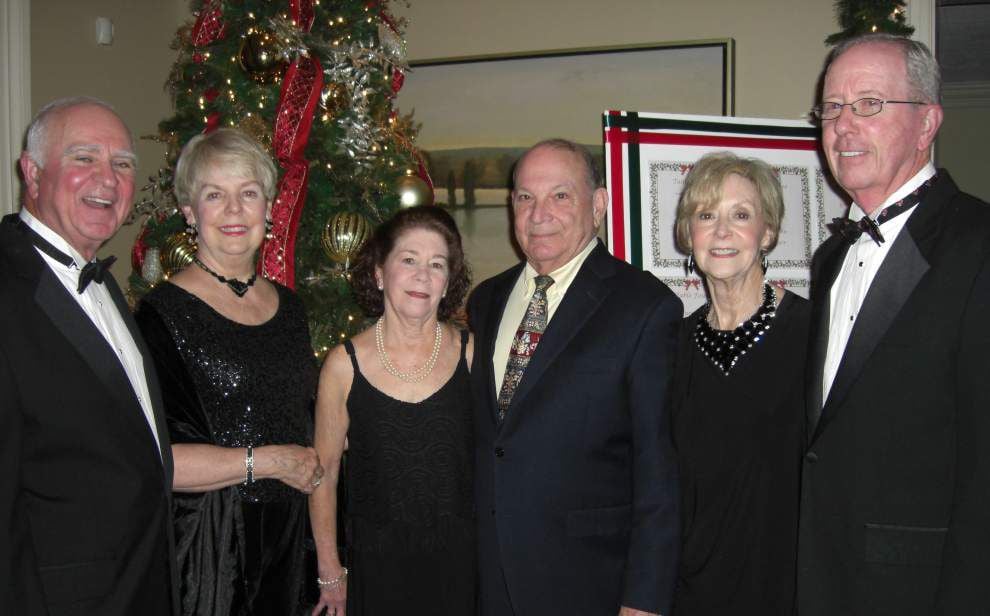 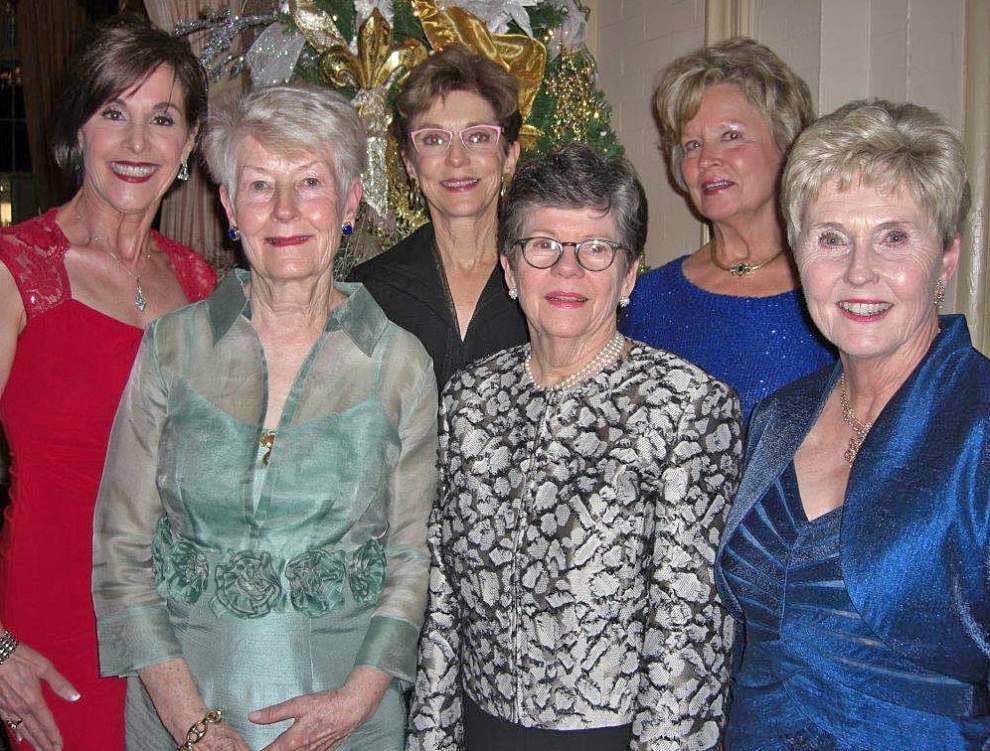 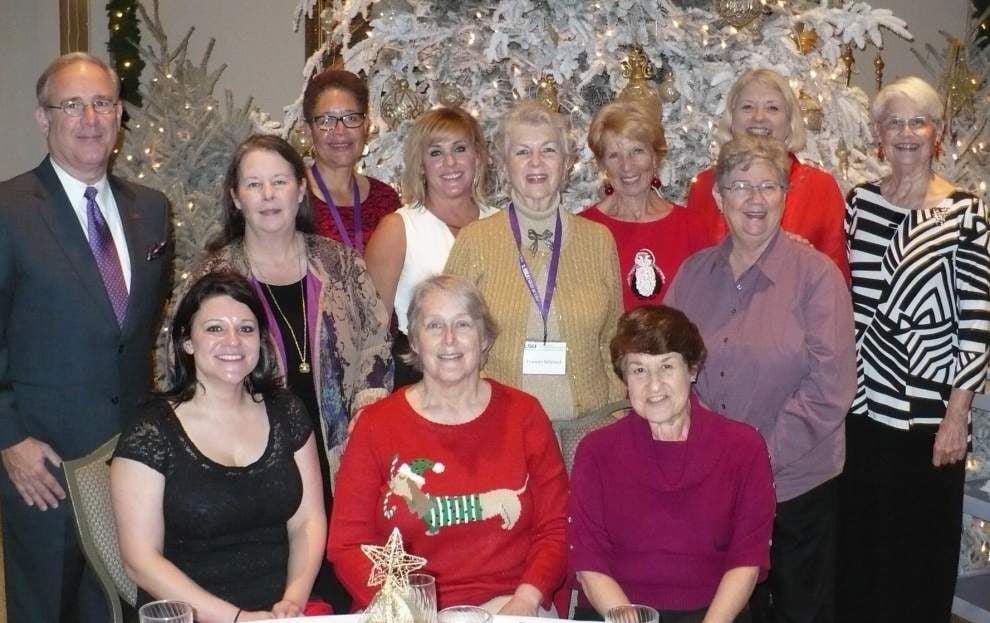 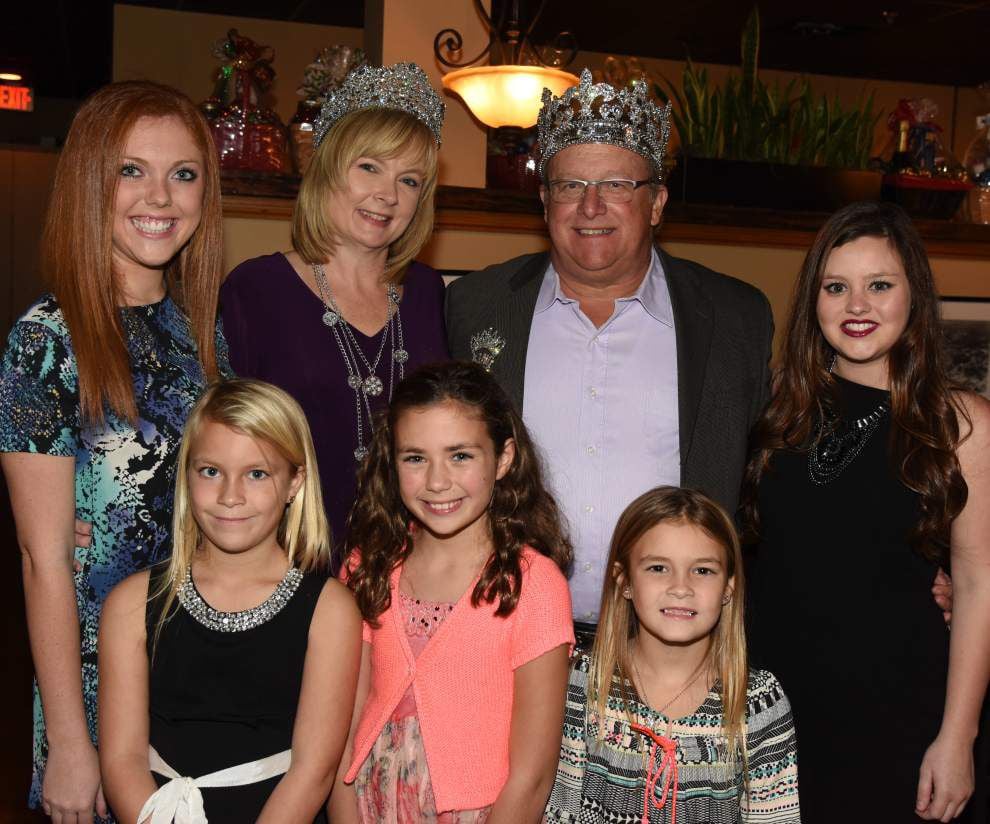 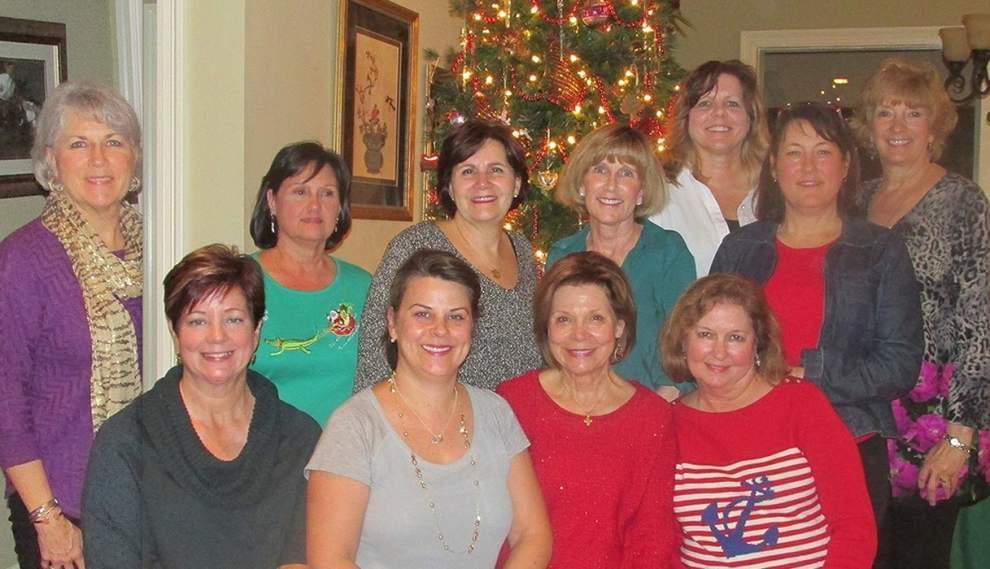 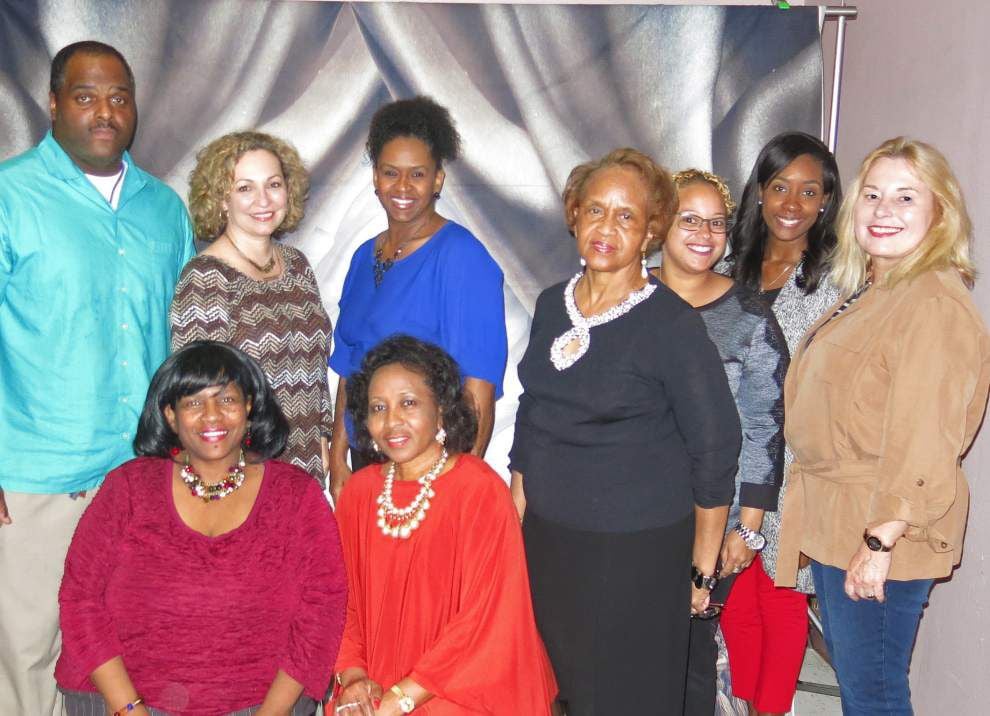 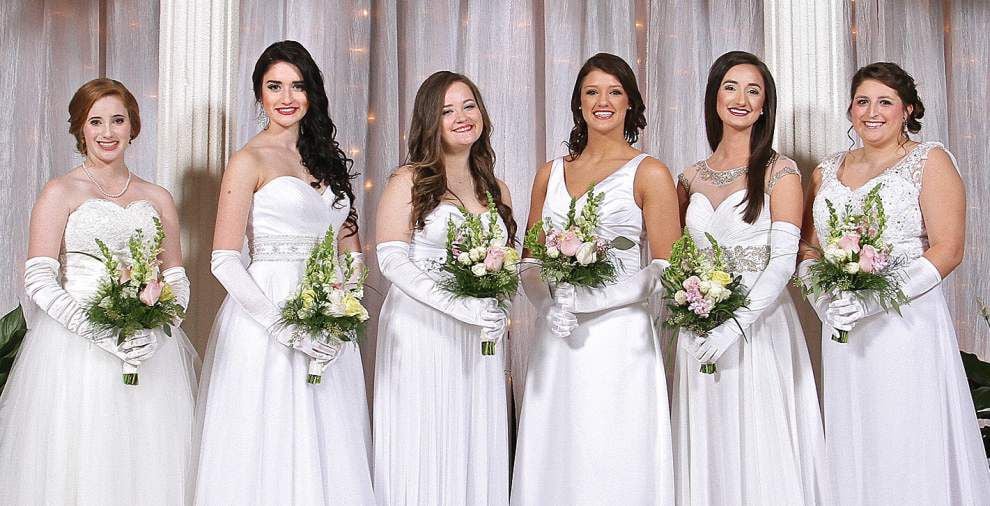 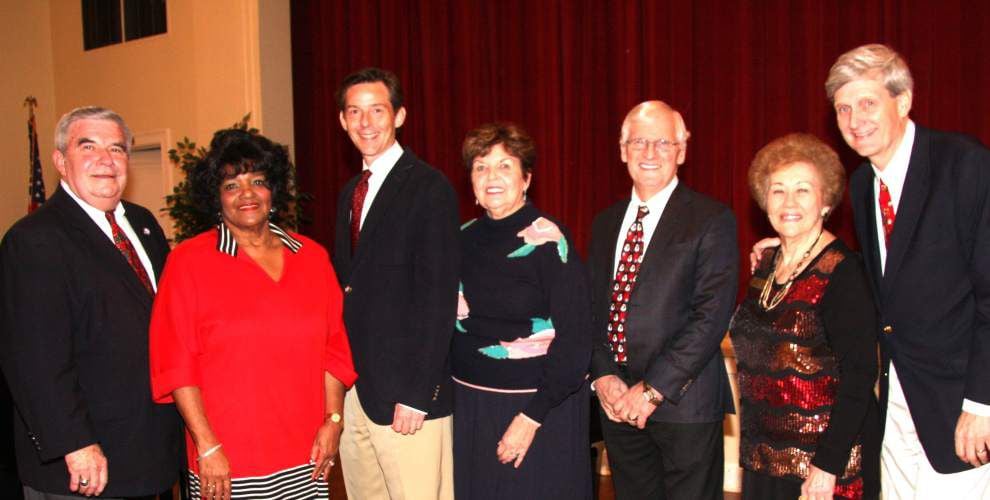 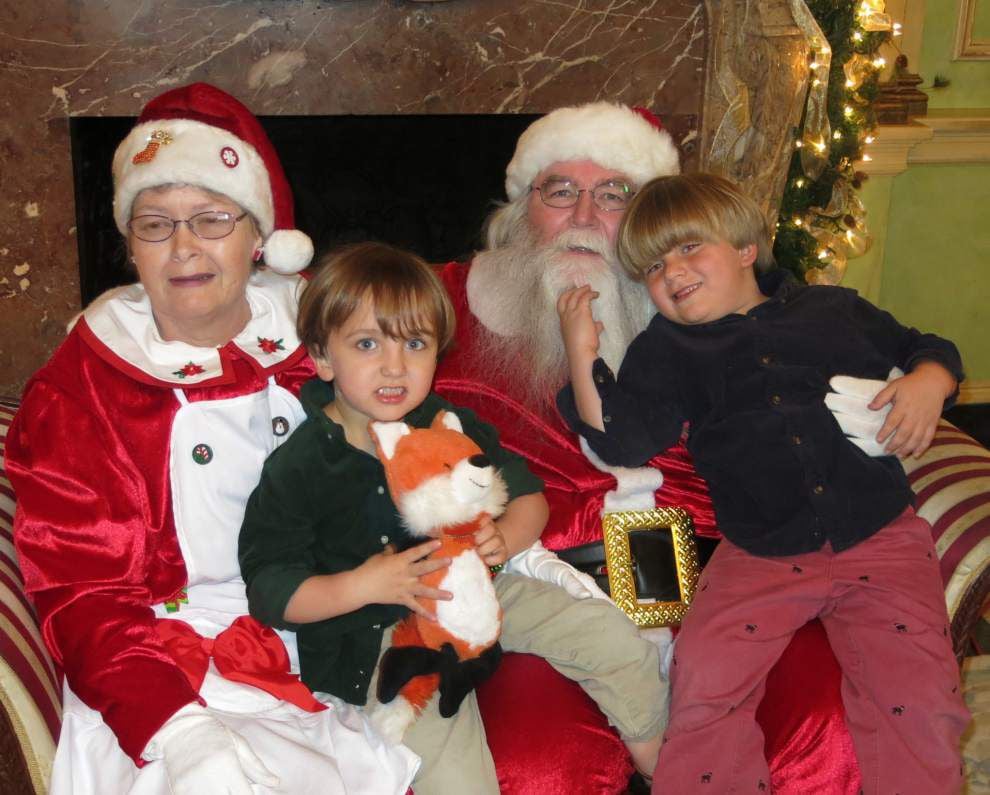 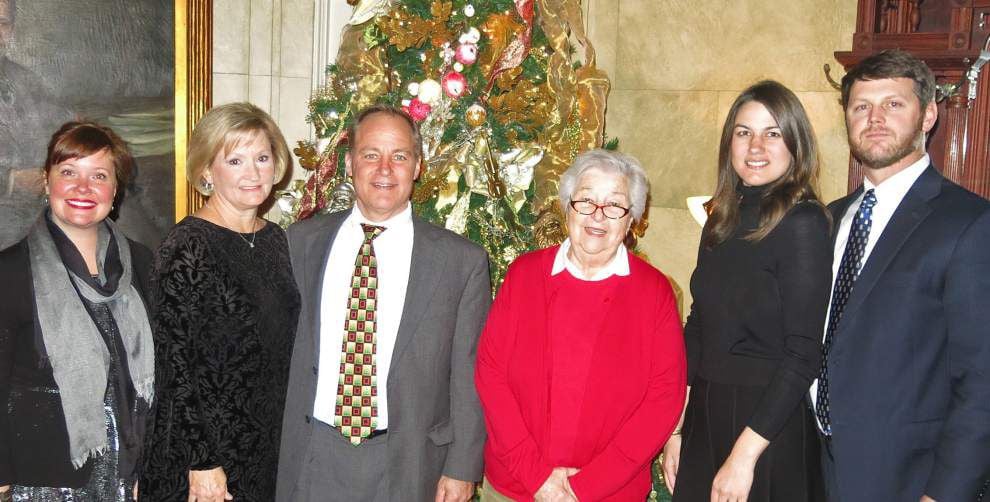 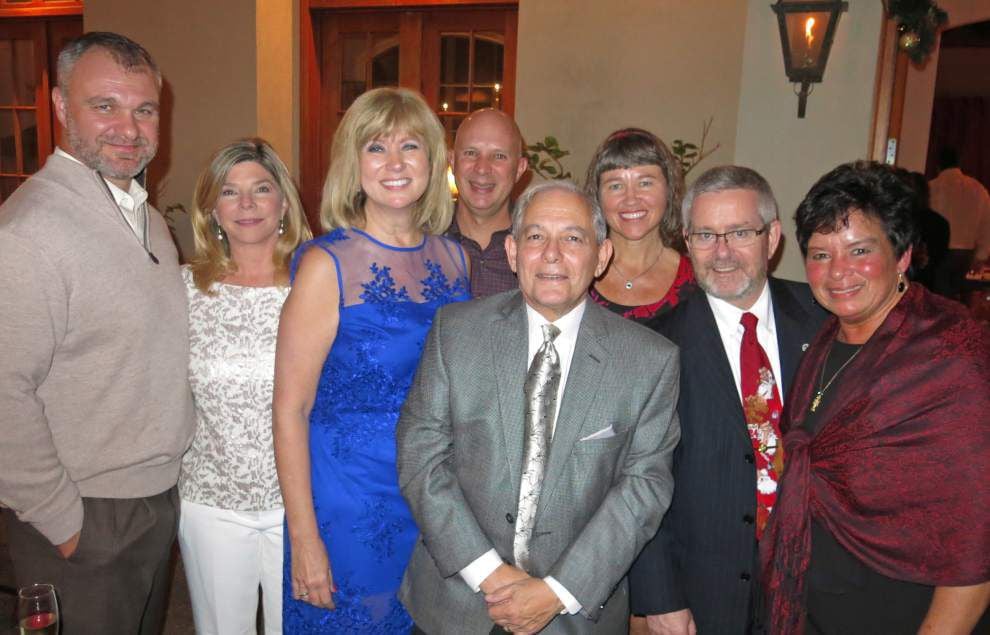 Advocate staff photo by PAM BORDELON --- Profita holiday --- Celebrating the holidays at the annual party hosted by Karen and Bill Profita are, from left front, are Dom and André Zamarlik, the hosts and Peter and Tina Holland; and, back Juan and Joanne Carillo. 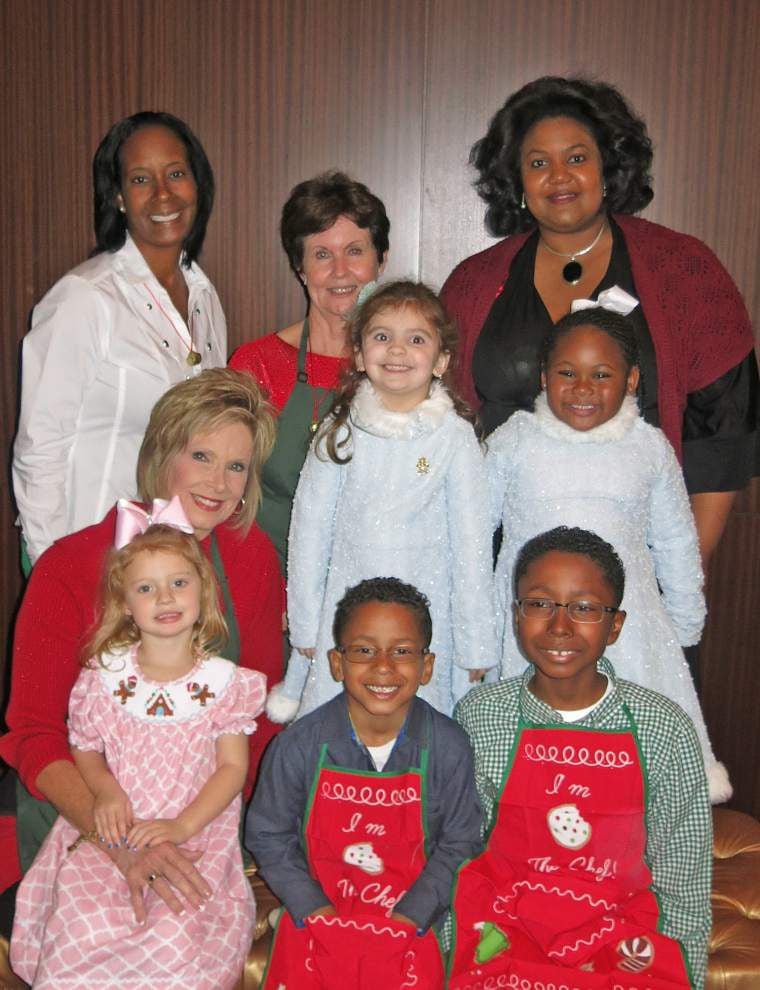 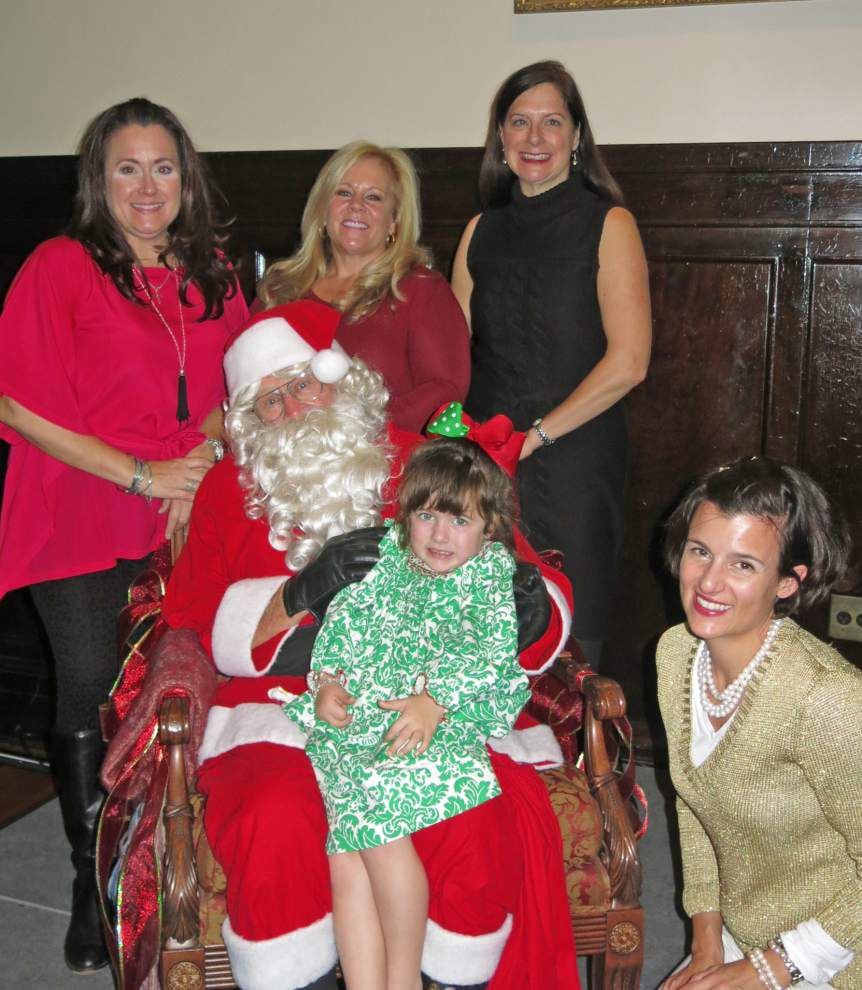 Advocate staff photo by PAM BORDELON --- Profita holiday --- Celebrating the holidays at the annual party hosted by Karen and Bill Profita are, from left front, are Dom and André Zamarlik, the hosts and Peter and Tina Holland; and, back Juan and Joanne Carillo.

Holiday celebrations are in full swing here in the Capital City, malls are bustling, neighborhoods are a twinkle with sparkling lights and the city’s official tree is now glowing in the Town Square.

We all know how Mayor Kip Holden loves issuing proclamations and last Sunday could have easily been proclaimed Holiday Tea Day, with two high teas on the agenda.

My first stop took me downtown for the Baton Rouge Symphony League’s debut Jingle Bell Tea at Ruffino’s Catering De La Ronde Hall. Moms and daughters, granddaughters and grandmothers, aunts and nieces donned their prettiest holiday frocks for the festivities, which included a visit with Santa, aka Wayne White. Also on the afternoon’s agenda were crafts and music.

Following the tea, a large contingent of the tea partiers trekked to the River Center Theatre for the Baton Rouge Symphony’s “Home for the Holidays” Family Pops concert.

From downtown, I headed out to the Renaissance Hotel, where the dance floor was filled with little girls dancing to the sounds of Café Au Lait at the Baton Rouge General Auxiliary’s sixth annual Gingerbread Tea. They eventually sat down to enjoy tea and a reading of “The Gingerbread Man” by WAFB ’s Graham Ulkins. The festivities also included photos with Santa, fun activities, door prizes and a silent auction.

One of my favorite holiday parties every year is the one hosted by Karen and Bill Profita, where an extensive and diverse guest list comes together. Add to that the scrumptious food these two spend weeks preparing, some adult libations and it all makes for one very special celebration. This year’s Dec. 5 party was one for the books.

May I never get kicked off this invitation list!

The evening before, the Foundation for Historical Louisiana rolled out the welcome mat at the Old Governor’s Mansion as part of downtown Baton Rouge’s Festival of Lights celebration, which also included the lighting of the city’s Christmas tree. The mansion was resplendent in the decorations coordinated by Designs by Milissa and underwritten by LUBA Workers’ Comp., the company’s annual gift to the foundation. Representing LUBA were COO Michael DePaul and wife Patty, and CEO David Bondy’s daughter, Kelli Bondy Troutman, and husband Eric.

In the East Room, the younger set could visit with Santa and Mrs. Claus while over in the library were Christmas arts and crafts projects. The adults could shop and a take a last look at George Rodrigue’s “Saga of the Acadians.”

The Woman’s Club was filled with the spirit of the season for its Dec. 3 coffee, thanks to the music of University Baptist Church’s Celebration Singers quartet and decorations put up by Jane Dimattia and Angella Inzerella. Welcoming members and guests were Pat Richards and Margaret Rome.

Members of the Country Club of Louisiana Garden Club were in full shopping mode as they checked out the silent auction at their annual Christmas luncheon Dec. 1 at the clubhouse. A little mouse told me later that more than $7,000 was raised to help fun the club’s various beautification projects.

The event, chaired by Kathy Chenevert, Jean Hebert and Scarlet Hebert, doubled as a celebration of the garden club’s 20th anniversary. Welcoming the 100-plus members and guests was President Patricia Rodrigue. Linda McLellan entertained with a medley of holiday favorites while lunch was served.

One of the missions of the club is to build friendships, and I felt like I left with several new friends, starting with my hostess Holly Harless and tablemates Lauren DeCell, Gail Nettles, Karen Corkern and Mary Burr. I was also able to exchange holiday wishes with old friends Jeanette Baldwin, Carolyn Hebert, Carla Jumonville, Linda Ward, Gracie Rigell, Sandy Young, Debbie Kleinpeter, Peggy Moore and Tereasa Olinde.

Later that evening, I joined about a hundred other folks to celebrate Raising Cane’s founder/owner Todd Graves receiving the BREC Foundation’s LEAF (Leadership, Excellence, Activism, and Fellowship) Award, which honors an “individual, business or organization that has had a tremendous impact on BREC and our quality of life.” Along with a beautiful trophy, Graves received a $1,000 stipend to designate to the BREC program or project of his choice.

The presentation took place in the just-completed Turner Family Visitors Center at BREC’s Magnolia Mound Plantation. John Turner was having fun playing with the lighting, creating the perfect ambience. Other members of the family in attendance included mom Sue Turner (who received the first LEAF Award) and sisters Suzanne Turner and Moo Svendson — they all have every reason to be quite proud of this latest gift to our city.

The holidays weren’t the only thing being celebrated. Across the river in Plaquemine, the Krewe of Cypress was celebrating its 2015 debutante coterie. A winter garden provided the backdrop for the presentation of the six young women at the annual Debutante Ball at the Carl F. Grant Civic Center in Plaquemine Nov. 28. Ball Co-chairwoman Kitty Martin served as mistress of ceremonies.

Amorella is the granddaughter of the late Annie and Charles Harrison and the late Hila and Phillip Amorello. She was presented by her aunt, Ann Amorello, and escorted by her cousin, Bradley Philip Amorello.

Barker is the granddaughter of the late Rilma and Ernest Shafer, Melwyn Marionneaux Barker and the late William Edward Barker III. She was presented by her paternal grandmother and escorted by her uncle, David Wendt.

Bergeron is the granddaughter of Mary Ann and Gordon Gregoire, of Plaquemine; Ralph Bergeron, of Port Allen, and the late Elenita Bergeron. She was presented by her aunt and uncle, Lesa and Fred Sanchez, and was escorted by her uncle.

LeBlanc is the granddaughter of Lynn Delahaye and the late Landry Delahaye, and Janie and Jerry LeBlanc. She was presented and escorted by her father.

Passantino is the granddaughter of Maryann David, John Thomas Johnson and the late Lorraine and Michael Passantino. She was presented by her aunt and uncle, Pamela and Jason Passantino , and was escorted by her uncle.

Regira is the granddaughter of Cheryl and Henry King and Carol and James Regira, of Donaldsonville. She was presented by her mother and was escorted by her maternal grandfather.

Vanessa Moore was the other co-chairwoman. The official debutante toast was given by krewe President G. Bert Allain and Jeremy deBarrios. The debutantes will serve as maids in the krewe’s Jan. 23 Carnival Ball in Plaquemine.

Looking for the perfect Christmas gift for that hard to buy for person? The Lincoln Theater has the answer — a seat in that person’s name in the renovated historic theater. The Louisiana Black History Hall of Fame unveiled its latest fundraising project, “Name Your Seat,” at a reception hosted by Metro Councilwoman Tara Wicker at the Leo S. Butler Community Center Nov. 30.

With a new roof on the theater, which is on both the National Register of Historic Places and the National Civil Rights Historic Register, progress is moving along in realizing the dream of renovating the Lincoln Theater. Architect Deron Brown put it very well when he told those in attendance that the Lincoln will “no longer be a sign of blight but of community.”

Follow Pam on Twitter @pamspartyline. Items for Pam’s Party Line must be received by 9 a.m. the Monday preceding the run date. High-resolution digital photos should be emailed to pbordelon@theadvocate.com. Hard copy photos should be dropped off at or mailed to The Advocate, 7290 Bluebonnet Blvd., Baton Rouge, LA 70821. Events will run no later than four weeks after they have taken place. The date, place of the event and a contact name and daytime phone number must be included. Photos will be used at the discretion of The Advocate.