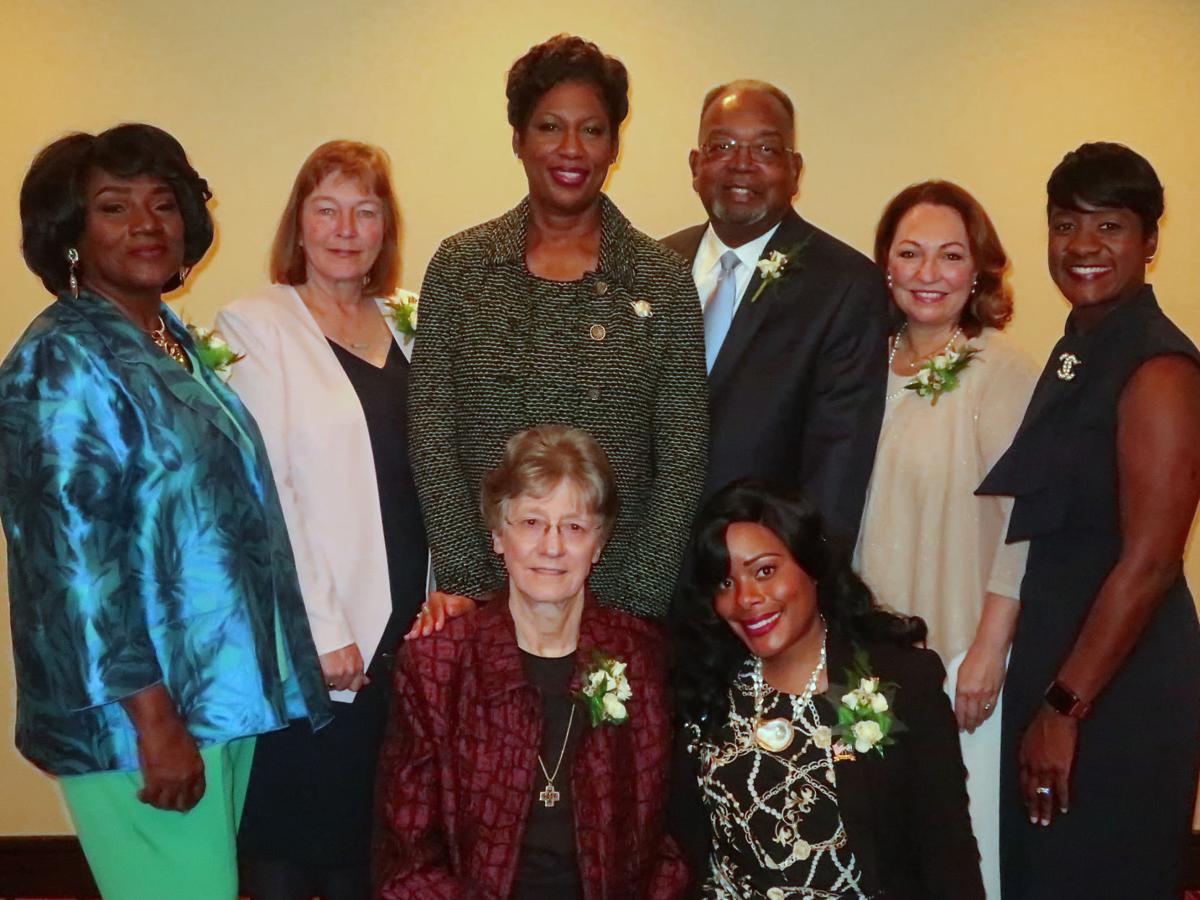 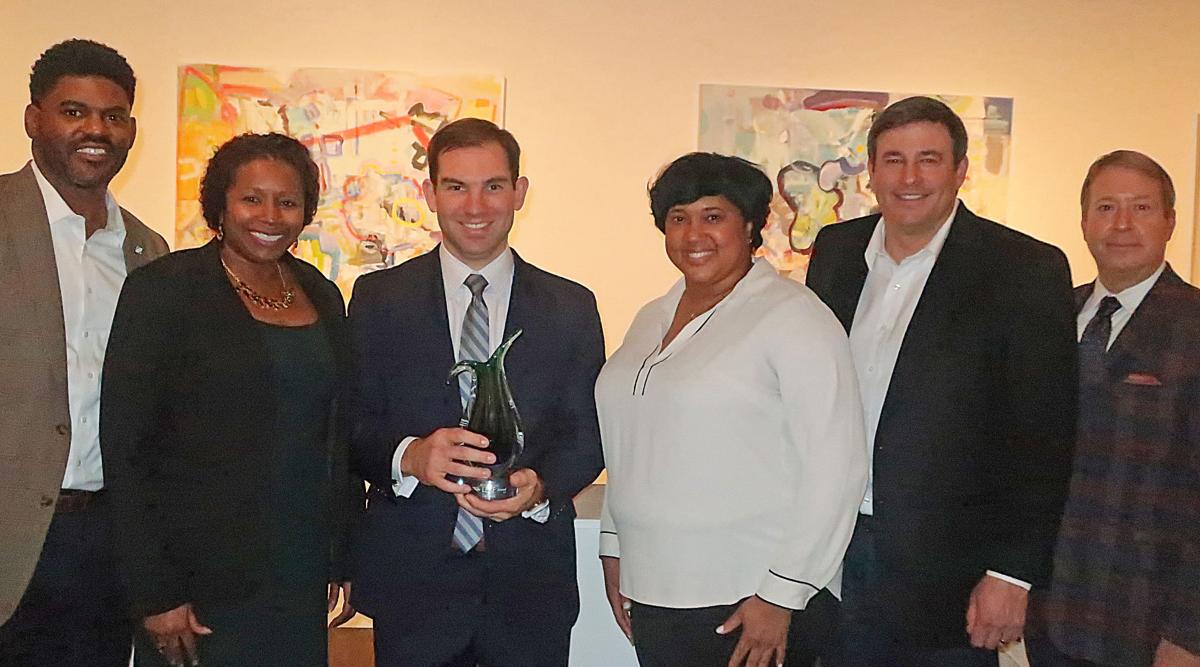 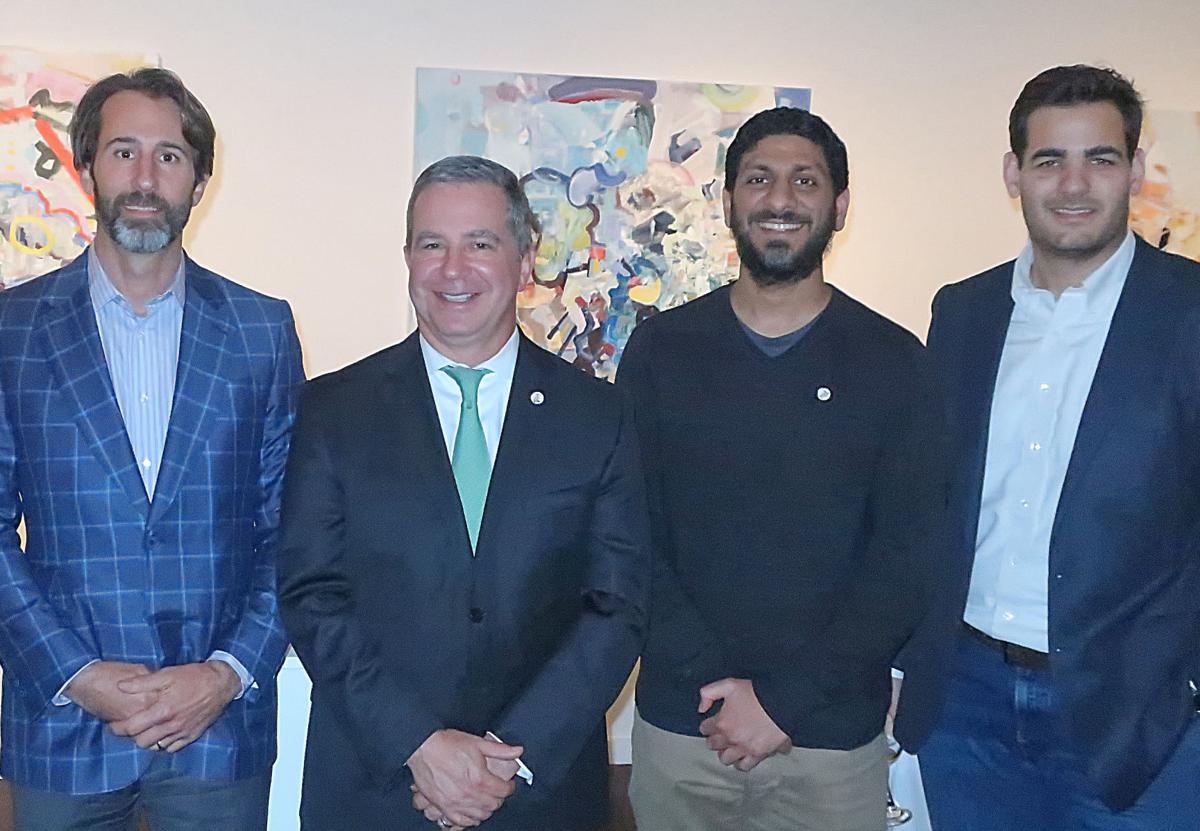 LEAF Award -- Elected to the board of the BREC Foundation at its annual meeting at the Baton Rouge Gallery are, from left, President Al Moreau, Treasurer Bryan Camerlinck, philathropy chairman Hitesh Chheda and special project chairman Chris Ferrari. 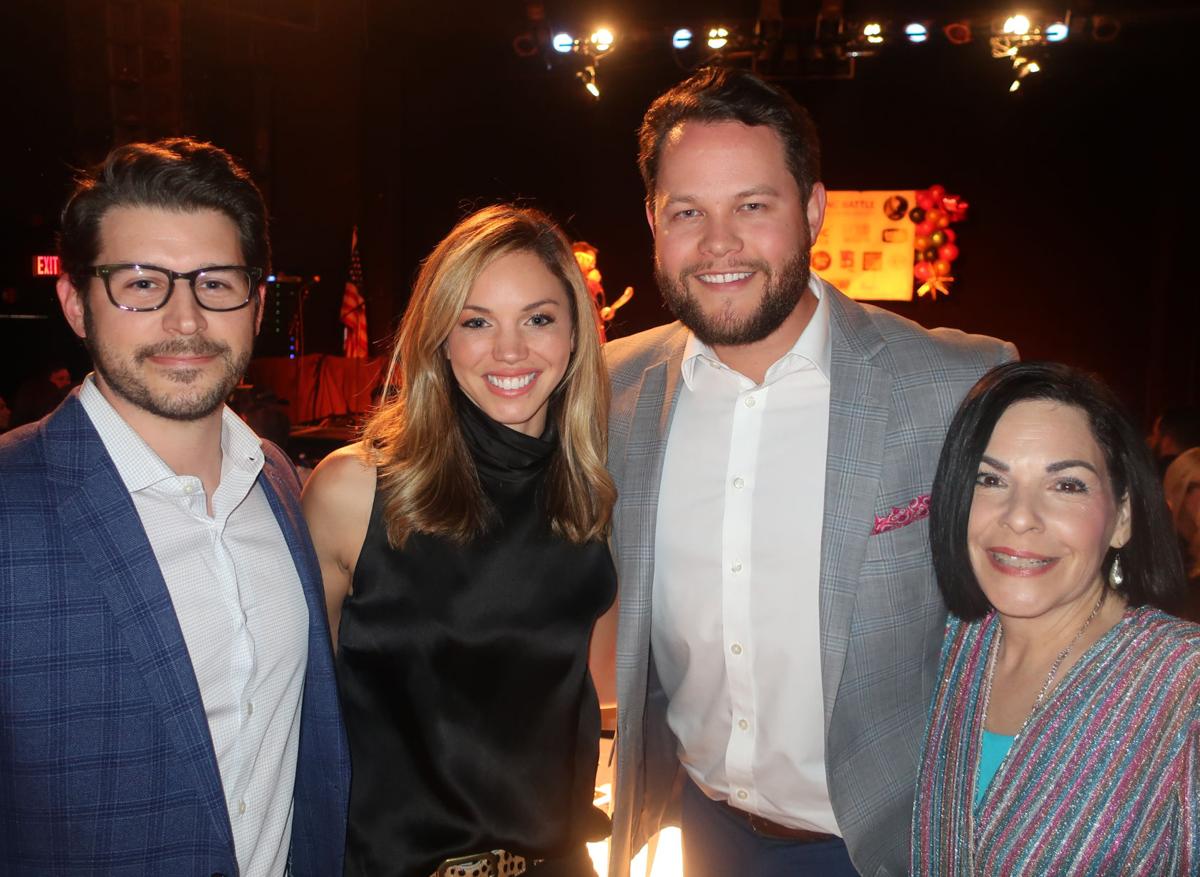 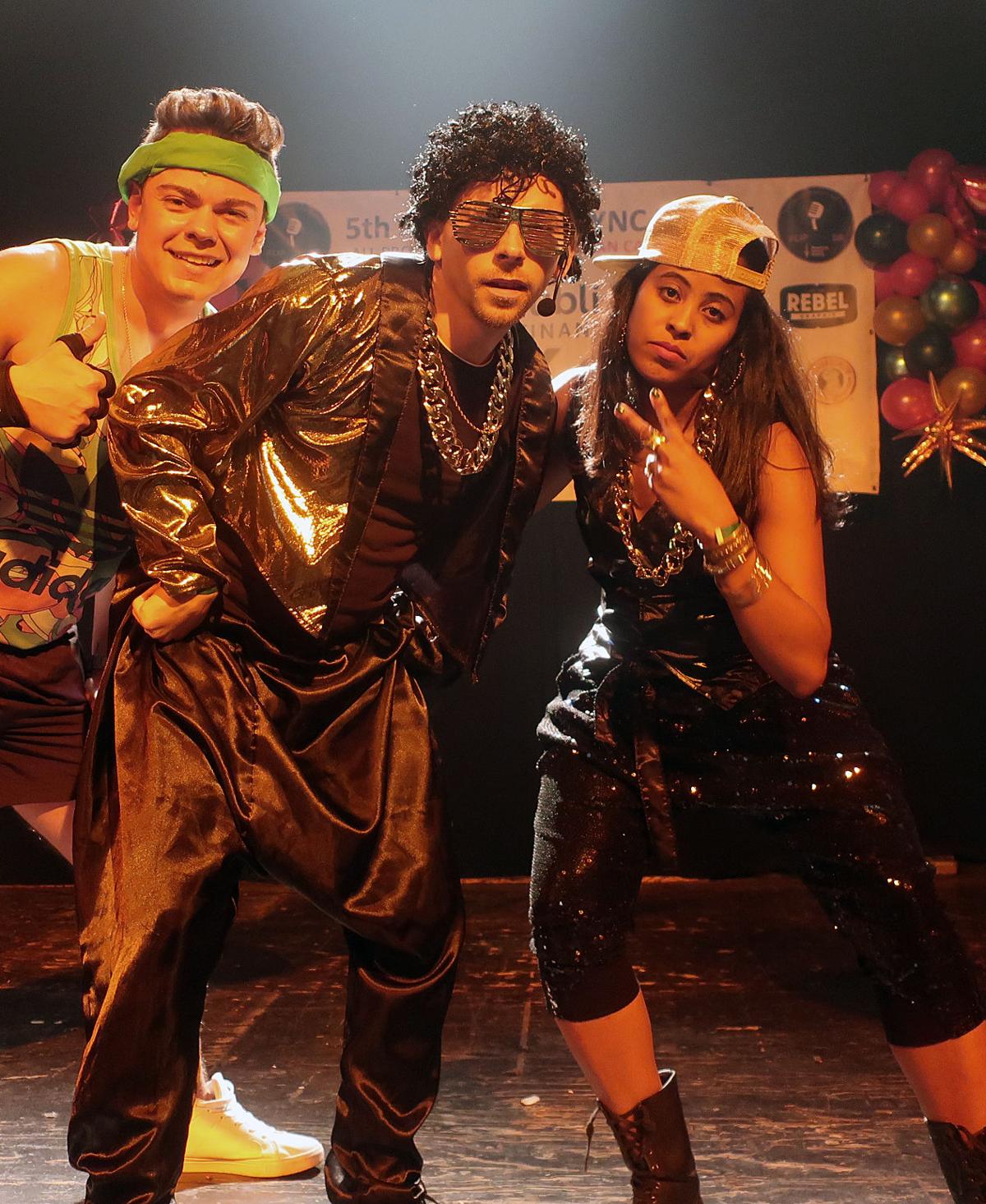 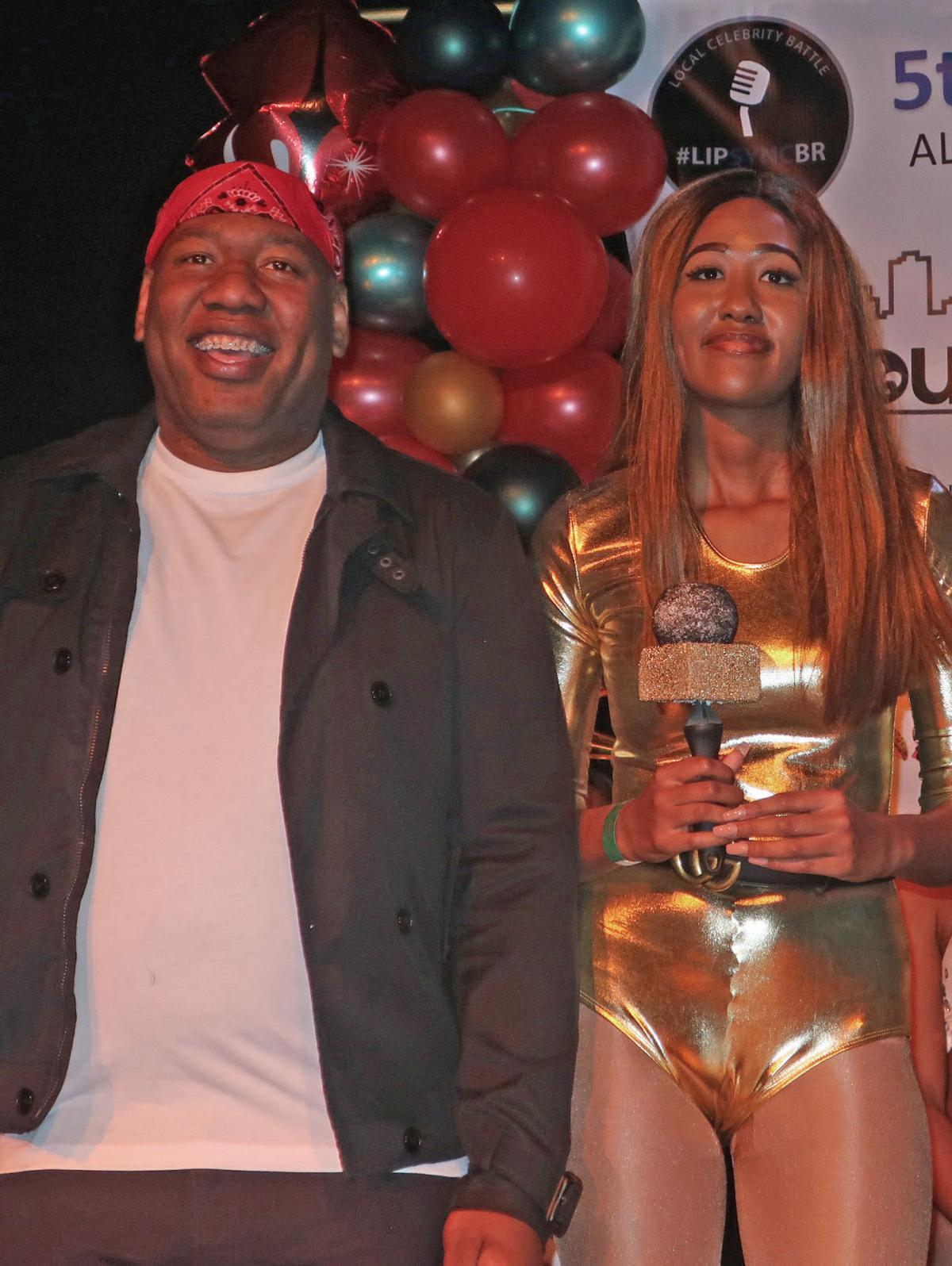 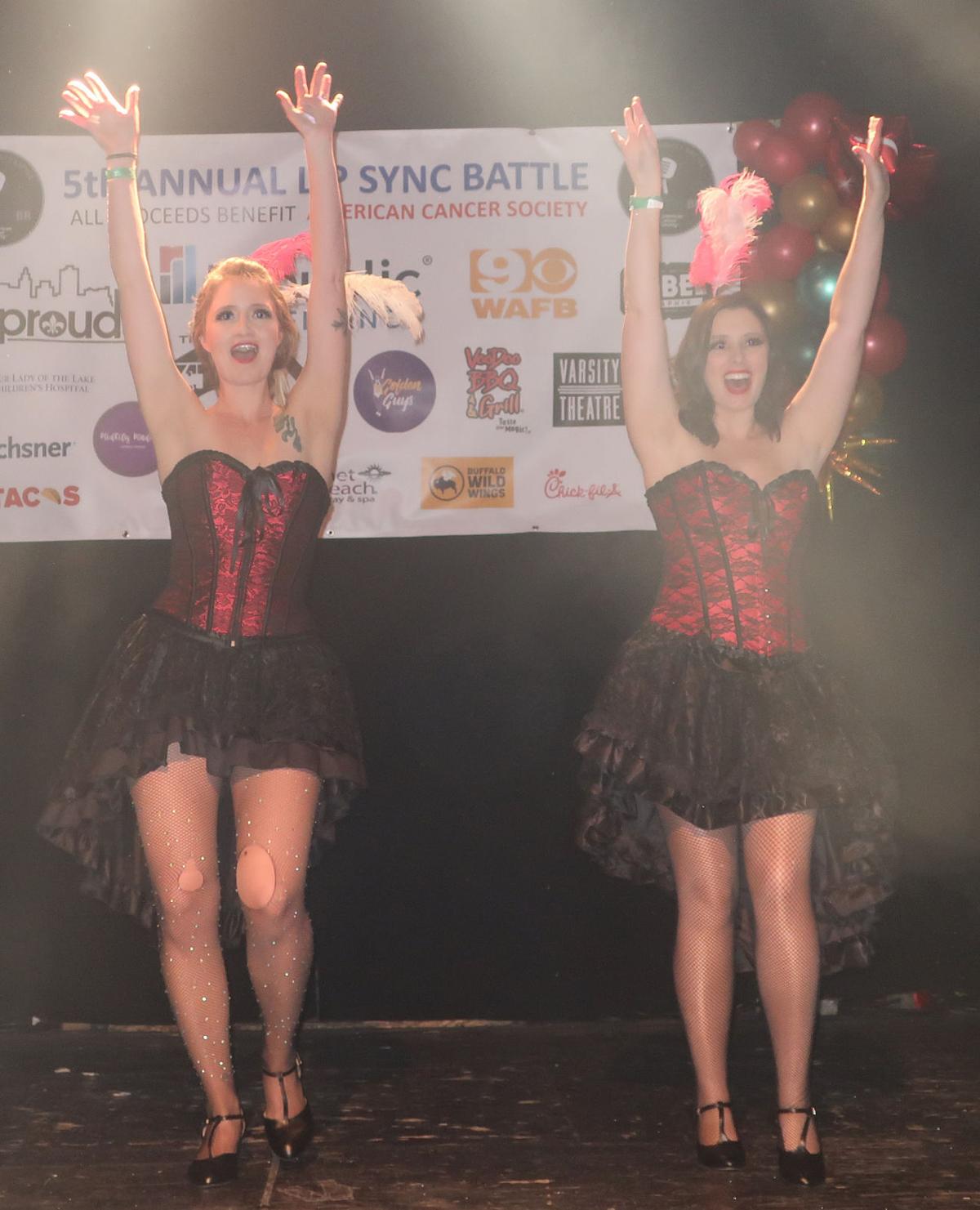 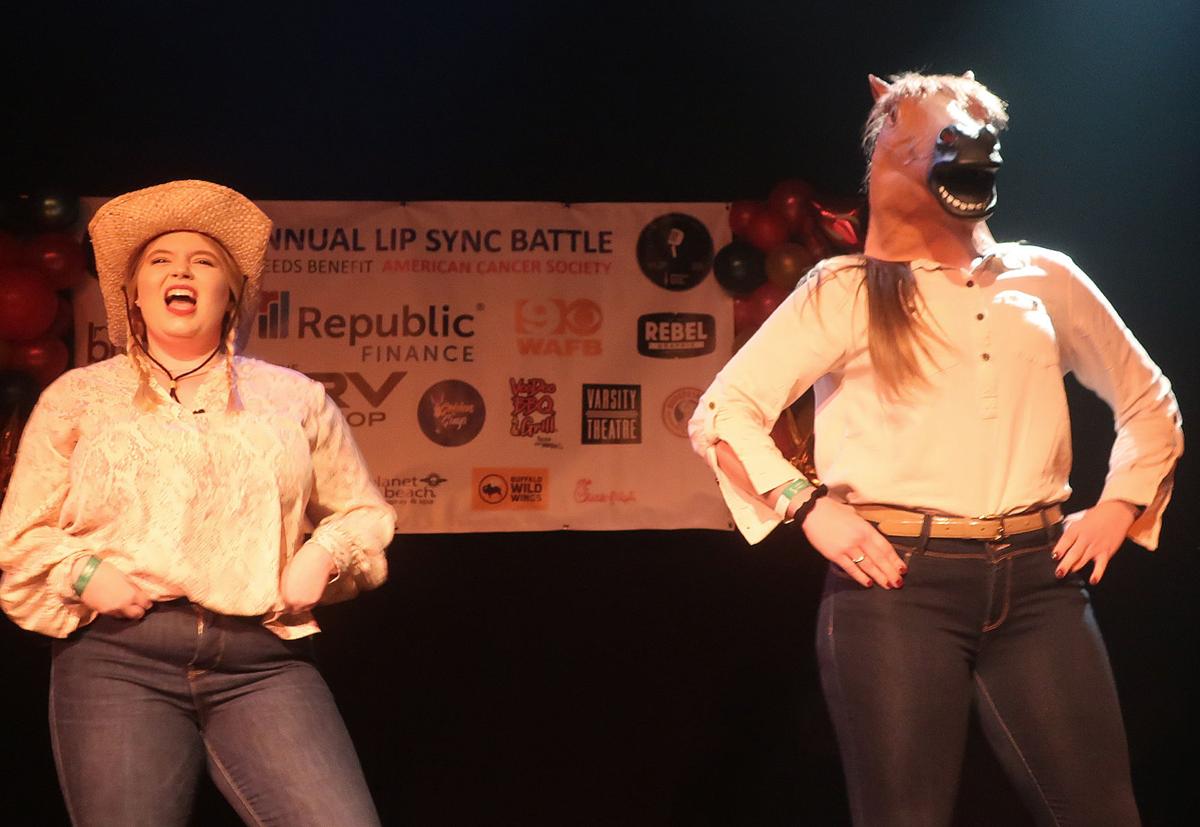 Lip Sync Battle -- Leading the Republic Finance team for the American Cancer Society, are Madison Smith, left, and Lauren Bourgeois who urged the crown to 'Ride a Horse, Save a Cowboy.' 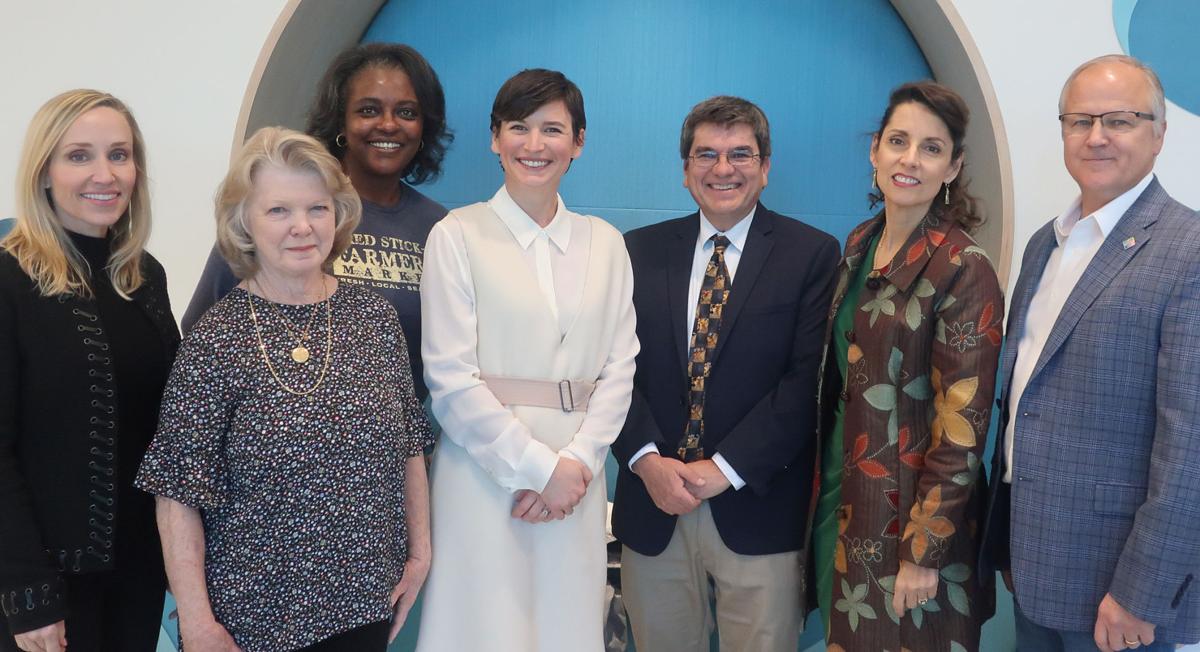 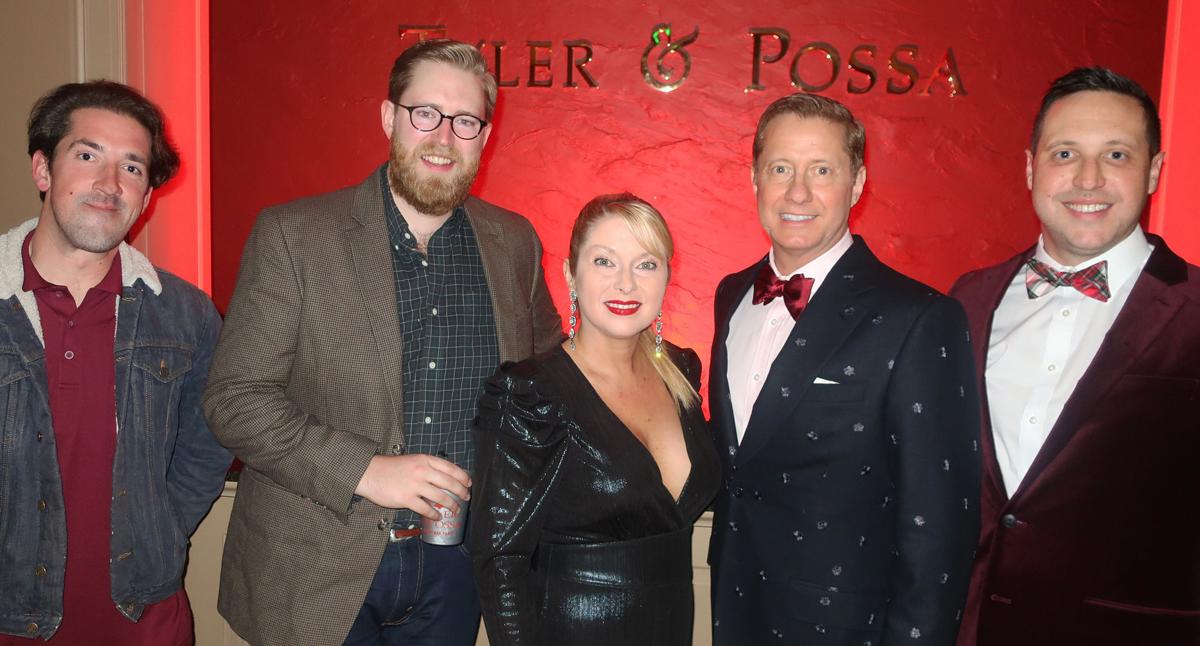 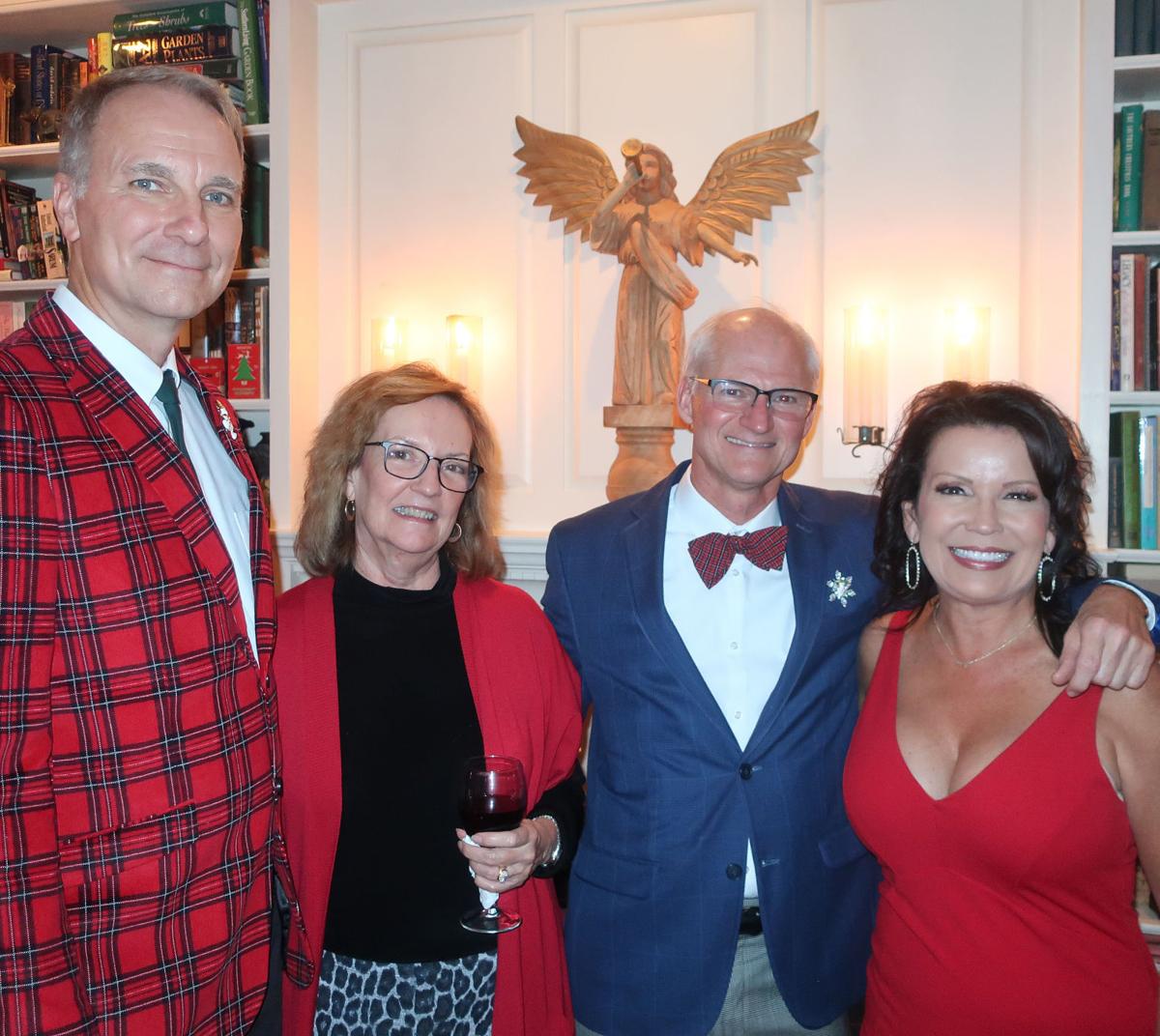 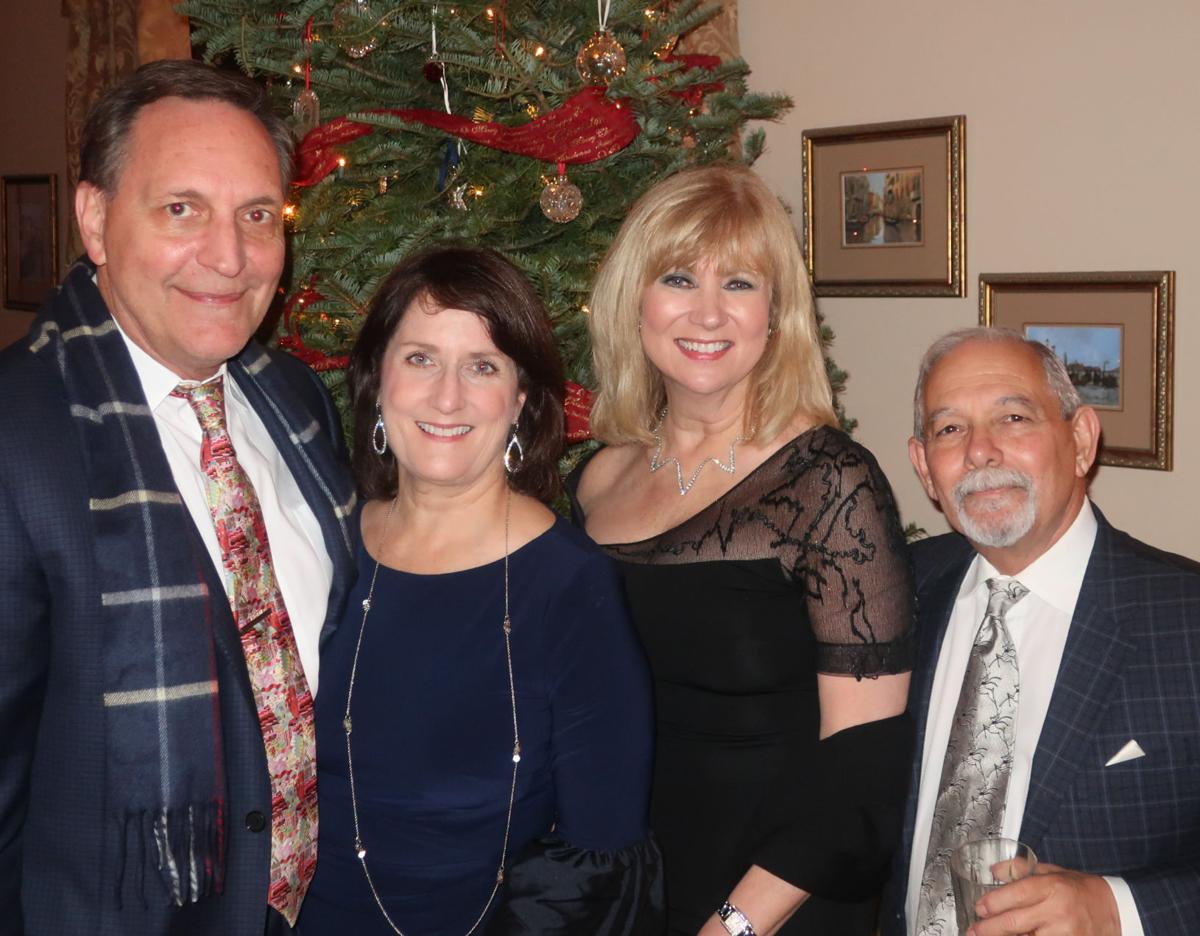 Holiday cheer -- With hosts Karen and Bill Profita, right, at their annual Christmas open house are Jeff and Laura Shaw.

LEAF Award -- Elected to the board of the BREC Foundation at its annual meeting at the Baton Rouge Gallery are, from left, President Al Moreau, Treasurer Bryan Camerlinck, philathropy chairman Hitesh Chheda and special project chairman Chris Ferrari.

Lip Sync Battle -- Leading the Republic Finance team for the American Cancer Society, are Madison Smith, left, and Lauren Bourgeois who urged the crown to 'Ride a Horse, Save a Cowboy.'

Holiday cheer -- With hosts Karen and Bill Profita, right, at their annual Christmas open house are Jeff and Laura Shaw.

The Baton Rouge Chapter of the Links' honored seven individuals as its Louisiana Role Models at its 14th annual Jazz Brunch on Dec. 14 at the Renaissance. Welcoming guests to the packed ballroom was chapter President Rose Hudson, who introduced state Rep. Ted Jones as the emcee.

The honorees represented each of the Links' five facets. In the Arts, the honor went to Renée Chatelain, CEO of the Arts Council of Greater Baton Rouge; in Health and Human Services, Cheryl Taylor, associate professor of nursing at Southern University; in International Trends and Services, Bea Gymiah, founder of “I, Too, Am America Club; in National Trends and Services, Norman Francis, former president of Xavier University in New Orleans, and retired Judge Freddie Pitcher Jr., the first African American judge in Baton Rouge; and in Services to Youth, Sister Joan LaPlace, a retired educator who served at St. Joseph’s Academy in both Baton Rouge and New Orleans as well as Brother Martin High School in New Orleans, and retired Juvenile Court Judge Kathleen Richey, executive director of Louisiana Court Appointed Special Advocates.

The honors continued with the presentation of the BREC Foundation’s LEAF (Leadership, Excellence, Activism and Fellowship) Award to ExxonMobil at its Dec. 12 meeting at Baton Rouge Gallery. The company has made financial investments to fund a summer intern for the recreation department, the Youth 360 afterschool program, the Realm of the Tiger exhibit at the Baton Rouge Zoo and BREC’s Rockin’ at the Swamp event. Additionally, ExxonEXCITE volunteers have installed park benches along a trail in Greenwood Community Park, and the company’s retirees directed contributions from the ExxonMobil Volunteer Involvement Fund to benefit Bluebonnet Swamp Nature Center.

The presentation and meeting were followed by a lovely reception organized by Pat Faxon and Sue Rainer.

The #ThisJustInCrowd, led by WAFB staffers Carmen Poe and Mykal Vincent, took home the top prize at the fifth annual Lip Sync Battle on Dec. 10 at the Varsity Theatre with their “Can’t Touch This” performance. The event is a project of the Young Professionals for American Cancer Society.

Coming in second were #LipSyncAssassins Kourtney Williams and Johan Gilmore, who were impressive as Beyoncé and Jay-Z. The #BeignYAYDoneDat team of Katie Jewell and Molly Talbot, along with their dance line, rocked Patti LaBelle’s “Lady Marmalade,” and received the People’s Choice Award.

Also competing were Shelly and Kyle Rogers, who did their version of “The Shallows”; Sara Fields and Michael Ip, who impersonated a boy band; the Republic Finance team of Lauren Bourgeois and Madison Smith, who encouraged everyone to “Ride a Horse, Save a Cowboy”; and the #LipSyncTimeMachine team of Kyle Peterson and Daniel Hoffmann, who brought down the house with his "wardrobe malfunction."

Serving as judges for the fierce competition were Myles Laroux, Wendy Lipsey and Dr. Erick and Stephanie Sanchez. Emcee for the night was Brian Gouri.

On Dec. 11, the Baton Rouge Epicurean Society board played Santa by handing out several checks at Our Lady of the Lake Children’s Hospital, which received the largest one in the amount of $50,000. The Greater Baton Rouge Food Bank got one for $15,000 and both BREDA (Big River Economic & Agricultural Development Alliance) and JDRF (Juvenile Diabetes Research Foundation) received $10,000.

The funds were proceeds from BRES fundraising events Fête Rouge, Fête du Vin and CrawFête. The society’s mission is to “enrich the culinary culture for the capital area community while raising funds for childhood nutrition initiatives, educational programs and scholarships.”

Pam'sParty Line: Wine, Mardi Gras and debs in the news

In the midst of all the nonprofit events, there were several fabulous Christmas parties. The first was the huge gathering hosted by the Tyler & Possa law firm on Dec. 12. It was a who’s who of the legal community, with judges Toni Higginbotham, Beau Higginbotham and, just retired, Lou Daniels among the guests, who eventually hit the dance floor to trip the light fantastic to a scaled-down version of Ned Fasullo’s Big Band Orchestra.

I ran into several of these same folks at the Dec. 15 open house hosted by Jim Gershey and Dan Gunther. I got to visit with Ira Paul Babin, Bobby Bernard and Eddie Sims, Carol Newman, Caprice McClure, Bryan and Robin McAndrew, Greg Mullowney and Jeff Stafford and Bill Cocreham.

From there, I headed to Karen and Bill Profita’s holiday soirée for the hundred-plus “close friends” where we weren’t just celebrating the holidays but LSU hero Joe Burrow winning the Heisman Trophy. I can always count on crossing paths with lots of media folks, past and present, at this party and I wasn’t disappointed. Air kisses were exchanged with Julie Baxter and hubby Rob Payer, Meg Casper and hubby Eric Sunstrom, George Sells and wife Patti, Jim Engster and LeAnne Weill as well as Susan Ross and hubby Arthur Metrailer, Melanie and Paul Arrigo, Leah and Frank Arrigo, Greg Phares, Mike Cammarosano, Charlene and Stan Montelaro, Laura and Jeff Shaw, Eunice McCarney, BeBe Facundus and Donna Saurage.