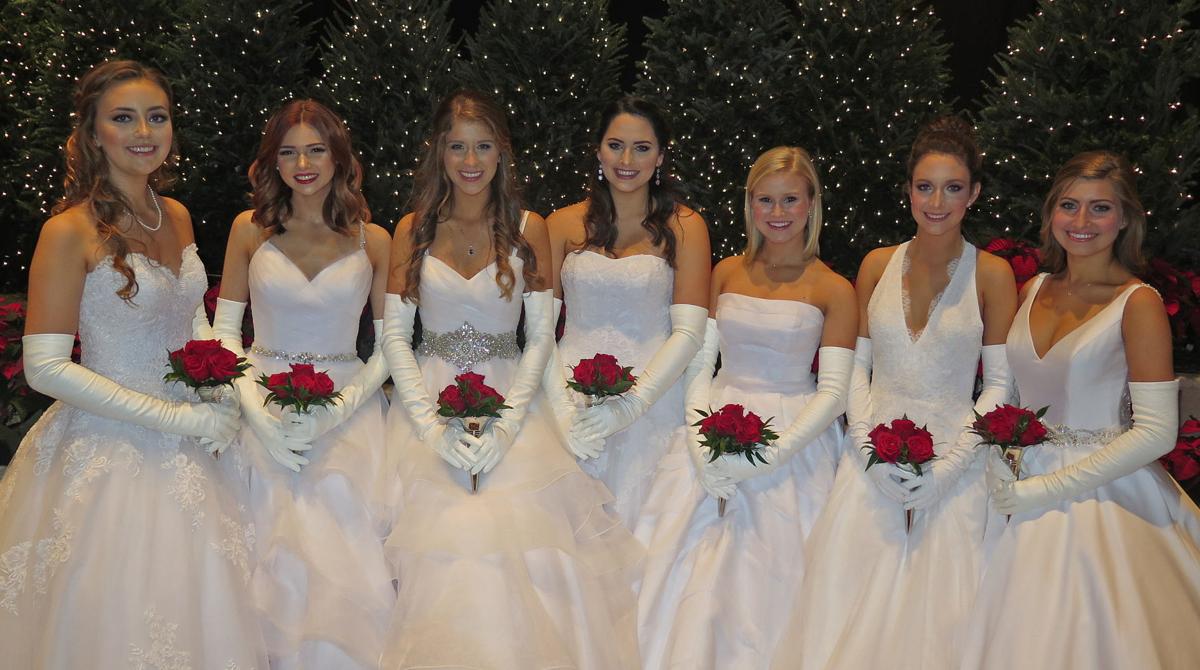 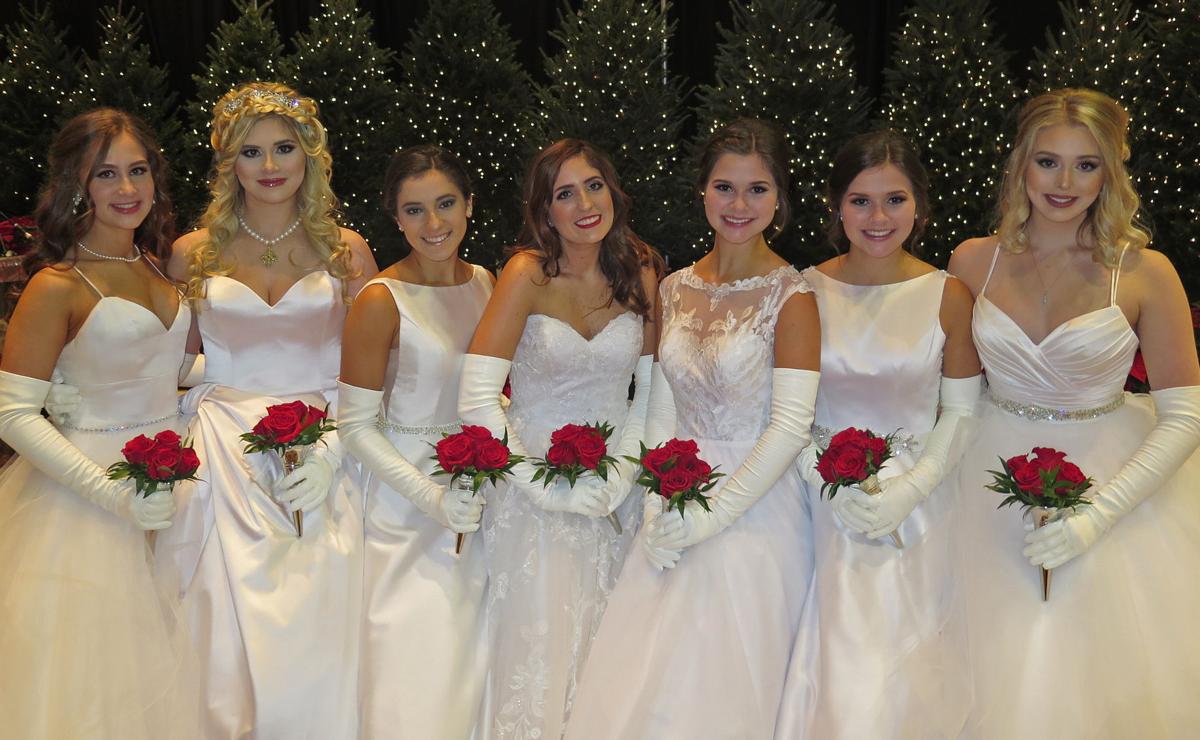 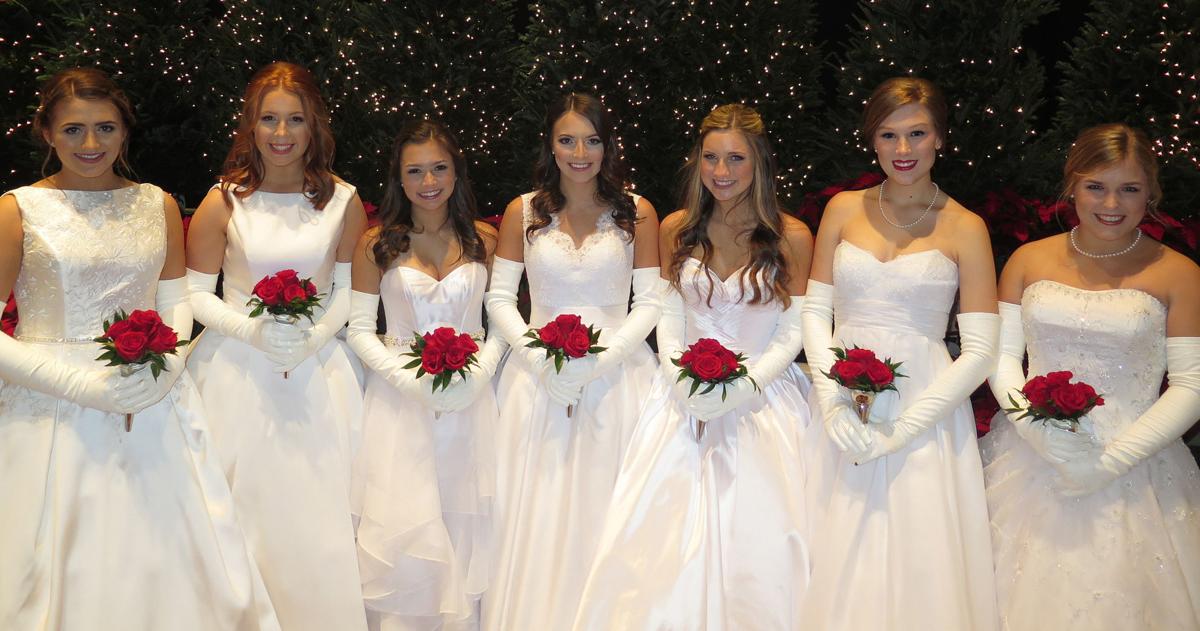 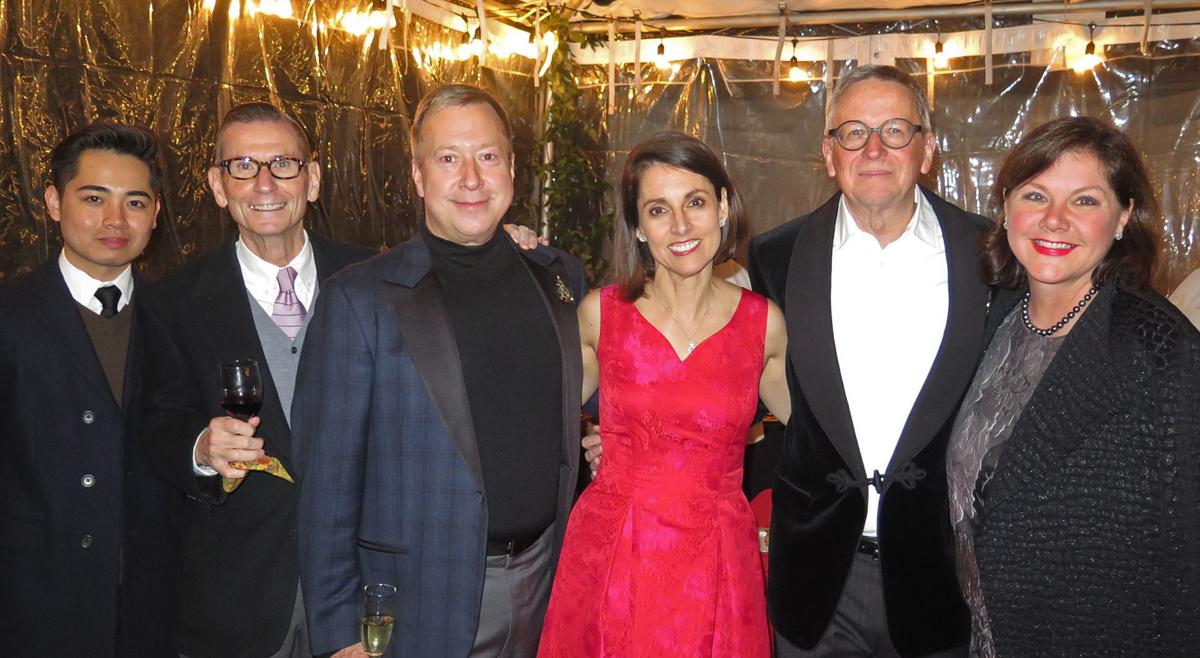 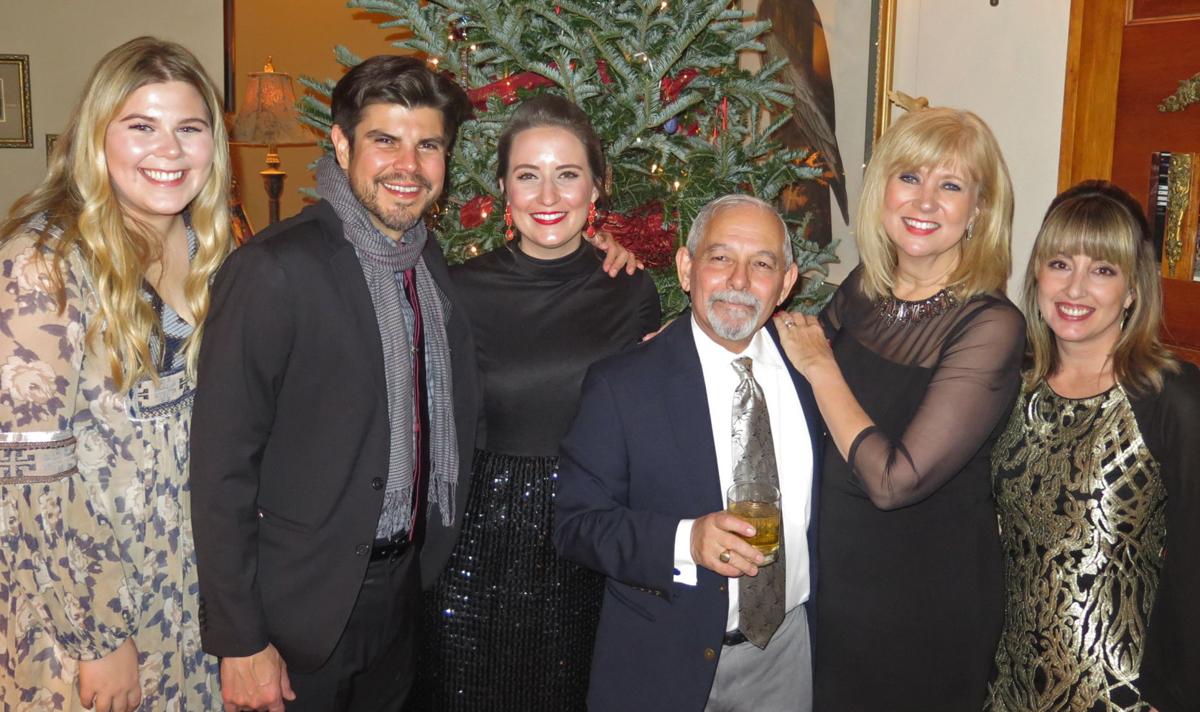 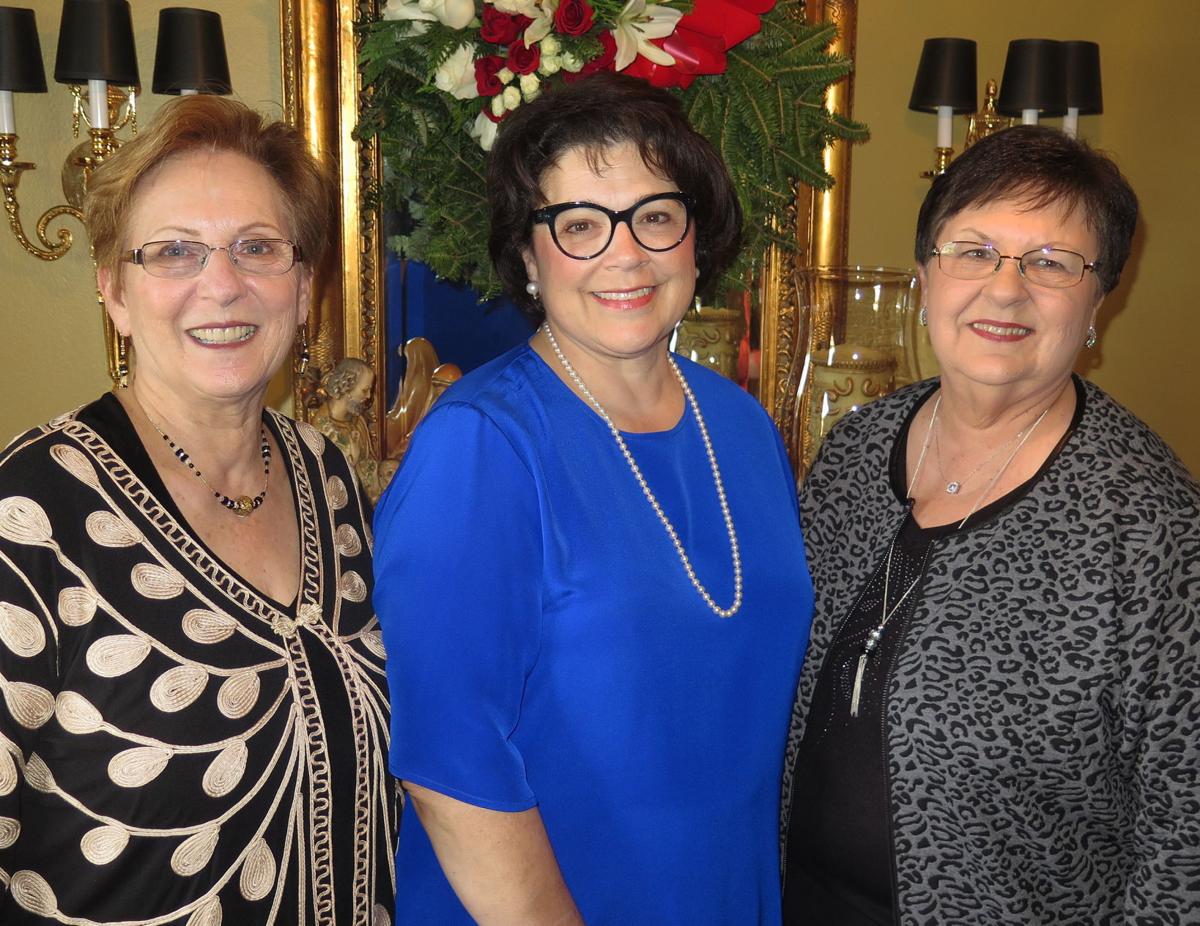 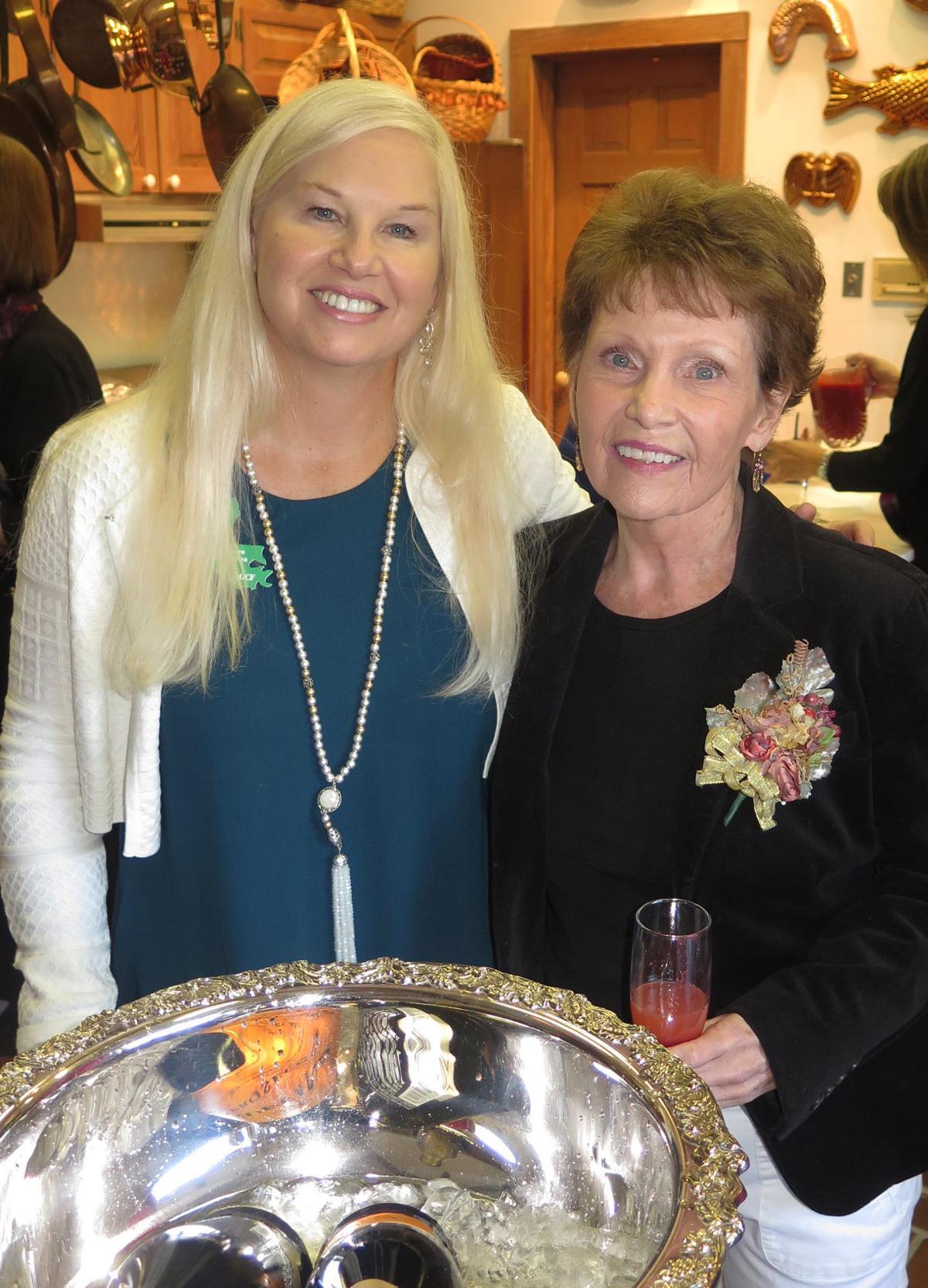 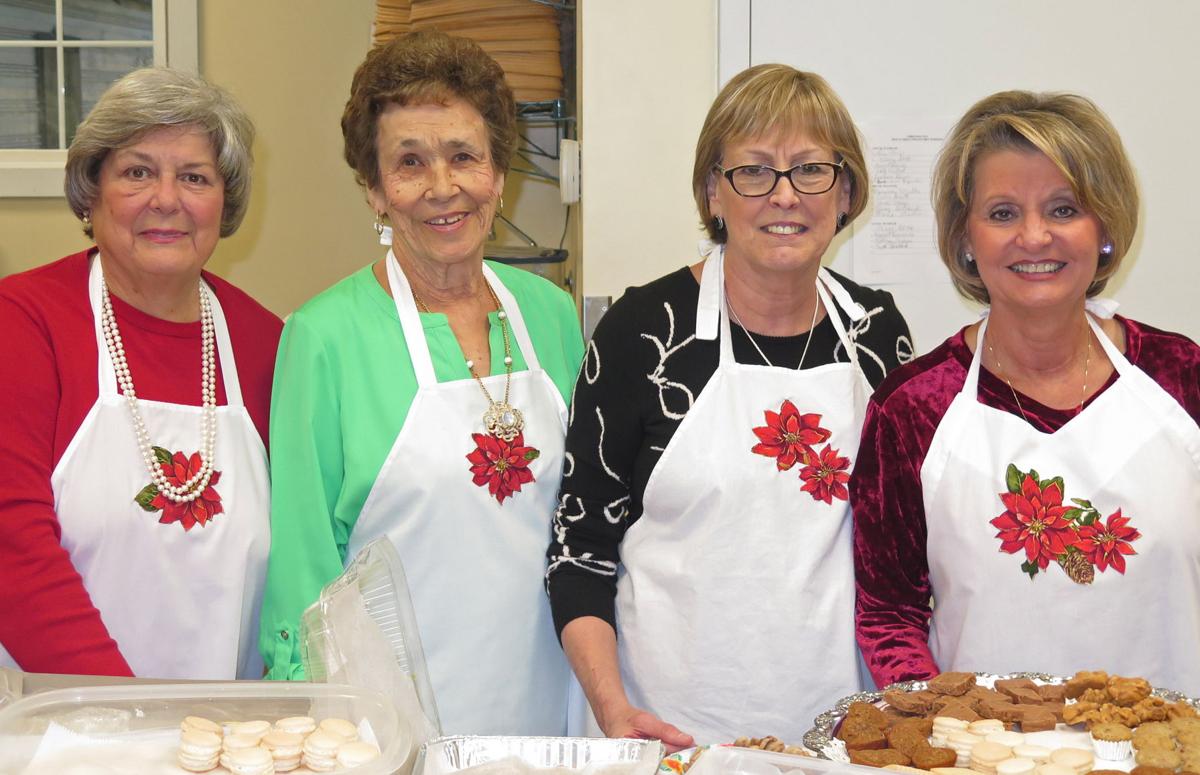 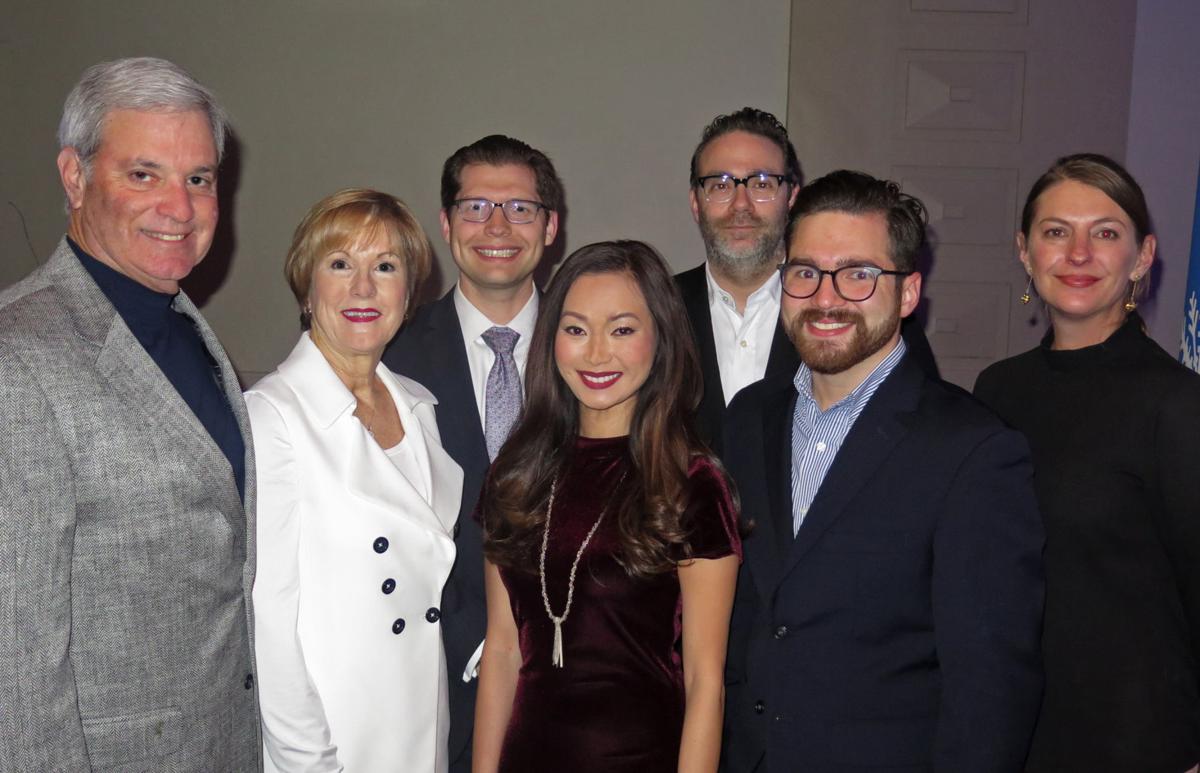 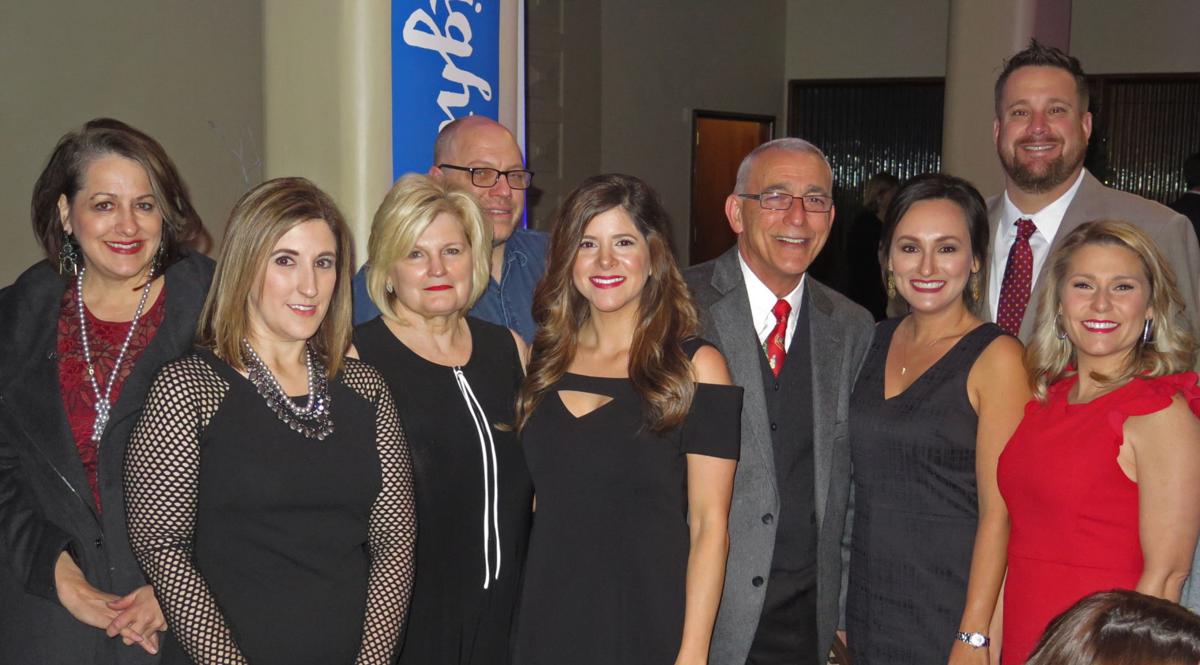 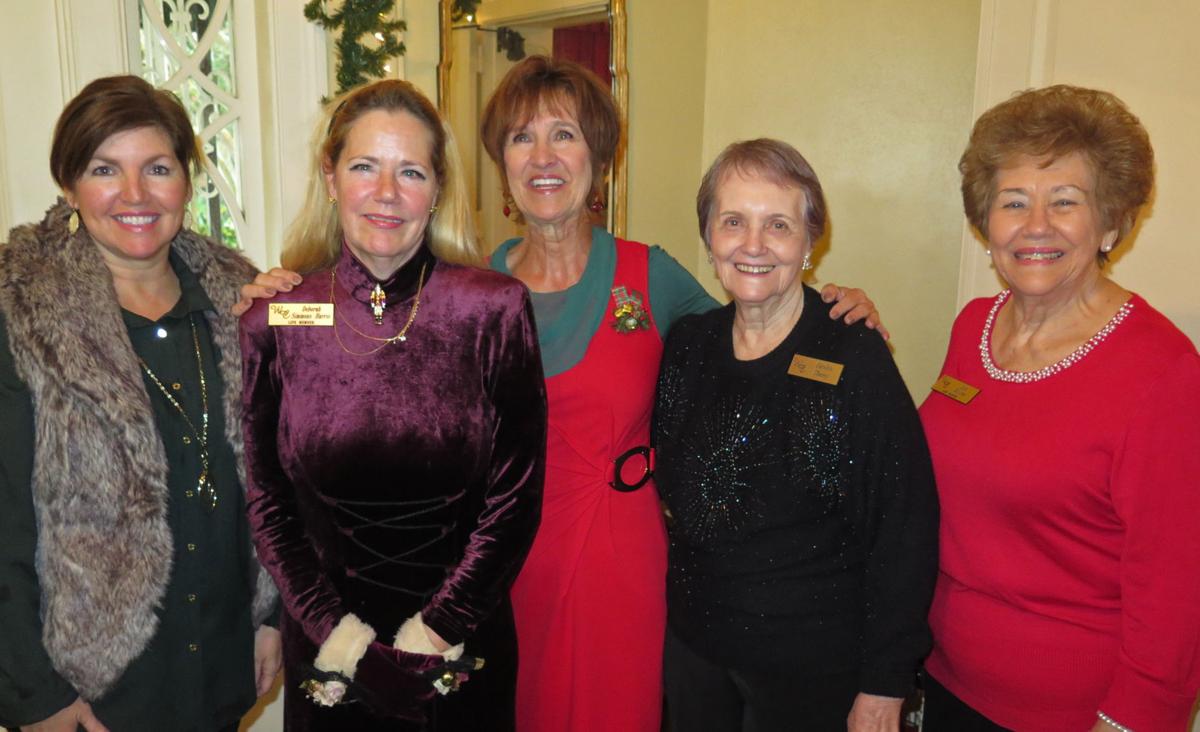 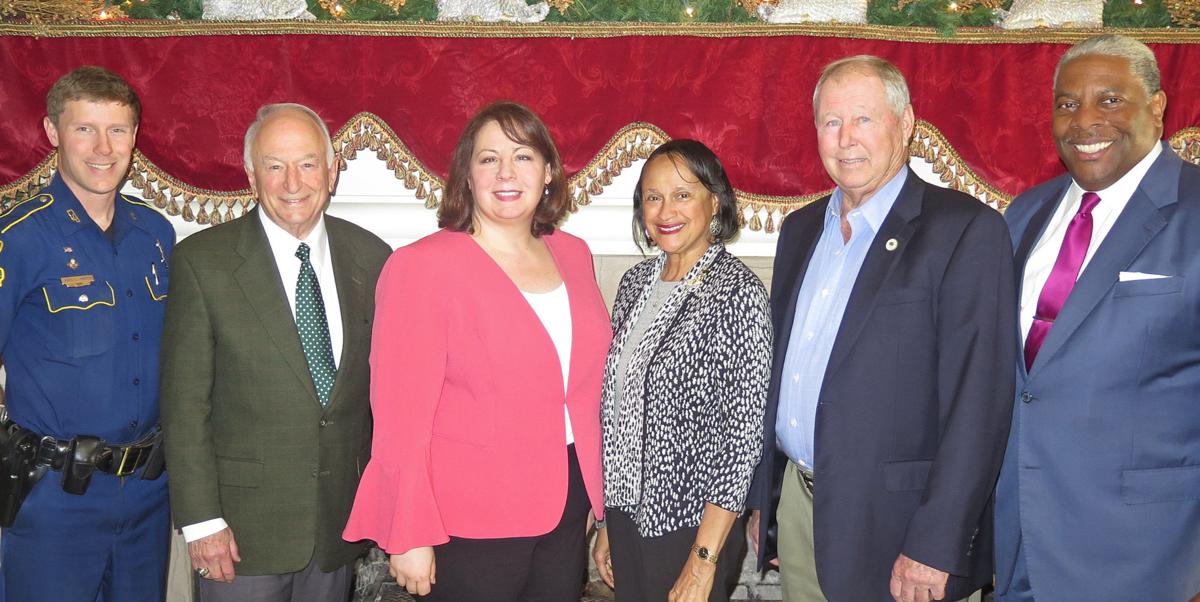 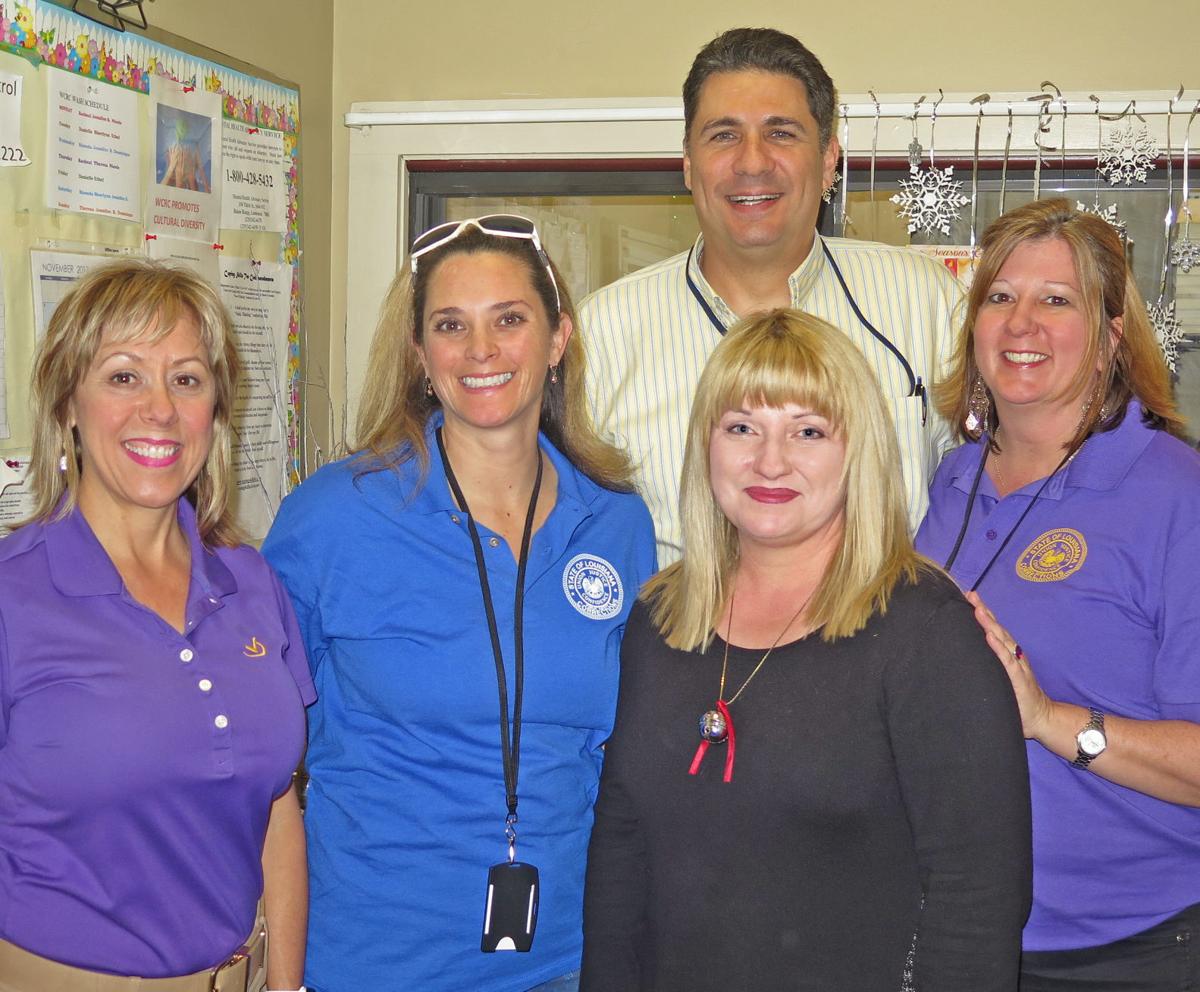 Last week's snow put Baton Rougeans in a happy holiday mood for a glorious weekend of parties and events.

Faux (should that be feaux?) snow decorated the ballroom of the Crowne Plaza for the Baton Rouge Symphony League’s annual Bal de la Symphonie on Dec. 9 while the real stuff started its slow melt outside. League President Paula Davis was joined by ball co-chairwomen Brandi Rinaudo and Jessica Wood in welcoming the several hundred guests to honor this year's debutante coterie for their four years of volunteer service to the Baton Rouge Symphony.

Introducing the 21 senior members of Les Jeunes Amies de la Symphonie was master of ceremonies J. Cullens. As they stepped into the spotlight, the debs were presented with a silver tussie mussie of red roses by acting BRSO Executive Director Jim Hanna.

A BRSO ensemble provided music for the presentation, which included the traditional waltz by the debs and fathers to "Moon River." Choreographer for the dance was Tranane Lissard. Following dinner and the presentation, guests danced to the music of the V-Tones.

The morning after the ball, the 30 Fraser firs that decorated the ballroom and more than 700 ornaments handmade by Les Jeunes Amies were donated to local nonprofits, including Volunteers for America, Potter’s House, Connections for Life and the Society of St. Vincent de Paul. The table centerpieces of white hydrangeas and roses accented with pine and golden magnolia leaves were delivered by LJA freshmen and their sponsors to area nursing homes.

From the Crowne Plaza, my party-hopping "date" Ann Guercio and I headed to the fabulous home of John Turner and Jerry Fischer for their delightful Christmas open house. Guests were greeted with flutes of bubbly and an ensemble of carolers singing holiday favorites. Inside the living room, Louis Wendt tickled the ivories for additional holiday ambiance.

Next stop was the annual holiday party Karen and Bill Profita throw for several hundred of their closest friends. This has to be one of the most eclectic guest lists in town! Where else will you rub shoulders with District Attorney Hillar Moore; Secretary of State Tom Schedler; media types like Jim Engster, Rob Payer, Kevin Gallagher, Michelle Southern, Glen Duncan, Pamela Matessa and Andrée Zamarlik; and nonprofit leaders like Mike Manning, Charlene Montelaro, Barbara Autin, Dusty Manson, Renée Chatelain, Paul Arrigo and Lauralynn Maranto. Even a few — Ava and Cordell Haymon, and Barbara and Brian Haymon — followed us from the Turner-Fischer party.

Karen and Bill prepare all the food for this party themselves, starting the cooking weeks ahead of time, but never in the kitchen together … I can understand that. While I was rather full of oyster stew and lobster, I did have to make room for the artichoke Parmesan cheese balls. They are one of my favorites! As we made our goodbyes, I crossed paths with a clean-shaven, barbered Tom Sylvest, who more closely resembled Santa the last time I saw him. Gotta say, I like the new you, Tom. And, as always, great party Profitas!

Sunday got underway with a brunch at the Baton Rouge Country Club fêteing the Karnival Krewe de Louisiane debutantes — Marla Aronson, Olivia Cooley, Kathleen Elofson, Jeanne Favret, Catherine Fuller, Madelyn Graves, Alexandra Martin, Hillary Melara, Abigail Mock, Adele Poché, Claire Soileau, Adair Talbot, Sydney Trainor and Jeanne Wood. This is where the girls get their hand-decorated umbrellas to be used in the second line the night of the krewe's Mardi Gras Ball, which is Jan. 19 at the Raising Cane's River Center. It's also where members of the royal court swap gifts, so the large table in the foyer was overflowing with elegantly wrapped presents begging to be opened.

Later that afternoon, I made my 24th annual trek across the river for the Plaquemine Garden Club's annual Christmas Tea. This year, the club's elves took over the home of member Kathleen Cooper and transformed it into a Christmas vision. The front door decorations were some of the prettiest I've seen in a while. I'd like to give credit but I could never find out who was responsible but it was either the hostess or one of these talented women — tea chairwoman Janet Bryant, Paula Alexander, Shirley Bickham, Brenda Blanchard, Margaret Businello, Kathryn Campesi, Jeannine Dunn, Galen Fabre, Terri Giougue, Mary Jo Hymel, Madeline Kessler, Sandra Landry, Bernadine Legendre, Gail LeJeune, Carolyn Marchand, Carol Ann Marionneaux, Marion Medine, Mona Perin, Polly Phillips, Patricia Ramirez, Sheryl Ramirez, Tracey Ramirez, Jackie Simpson, Sandi Stassi and Patsy Williams.

The threat of sleet and snow didn't cancel Hospice of Baton Rouge's Trees of Light Holiday Gala on Dec. 7. The Chee-Weez were keeping things hot inside The Lyceum as guests took to the dance floor. When not dancing, they were sampling the culinary spread and sipping libations from Churchill's.

Proceeds from the evening benefited the nonprofit's Patient Care Fund, which ensures the organization's commitment to providing hospice care to anyone regardless of their financial resources. It also allows Hospice of Baton Rouge to further develop its patient-related and community outreach programs such as Pet Peace of Mind, We Honor Veterans and Camp Conquer, which is a bereavement camp for children and teens.

Earlier that morning I joined members of the Woman's Club and their guests for their annual Christmas Coffee. Entertaining us were the Upbeats, under the director of Mary Lee. Chorus members included club President Debbie Harris and husband Jack. They had us singing along to "Angels We Have Heard on High," "Rudolph the Red Nose Reindeer," "Do Re Mi" and "Oh What a Beautiful Morning" — bringing back wonderful memories in the process.

Stop No. 2 that day was the Women's Community Rehabilitation Center, which was all decorated for the holidays. If you're not familiar with this agency, it serves women with severe and persistent mental illness, who are most often homeless, in a safe and secure home-like setting, by providing mental health care through a structured program focusing on education, therapy and vocational development.

I was taken on a tour of the facility by one of its proud residents after visiting with Program Director Kristi Bourgeois and several staff members from the Louisiana Department of Corrections.