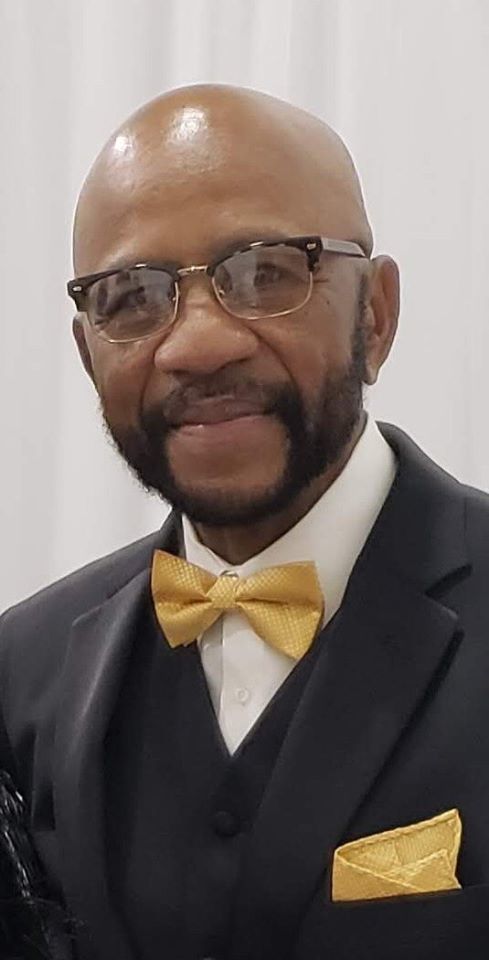 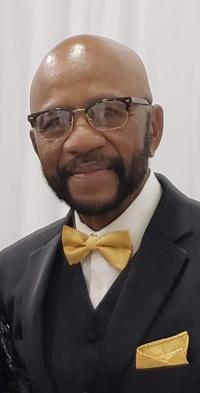 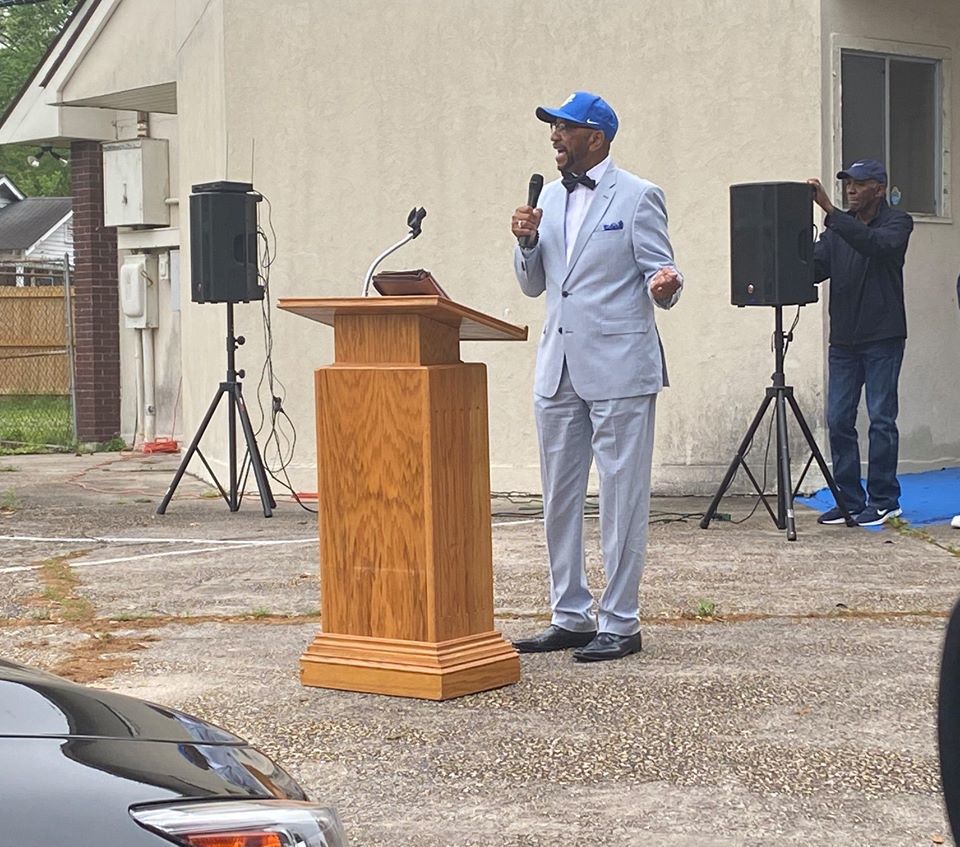 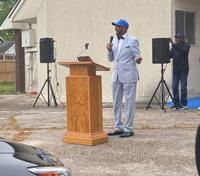 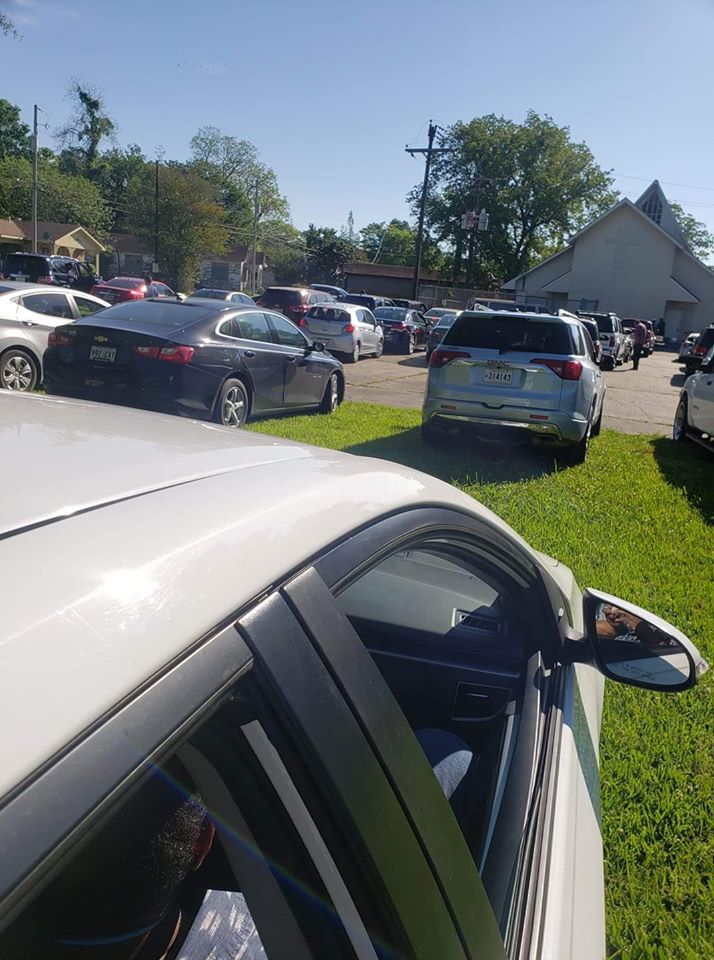 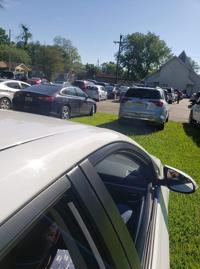 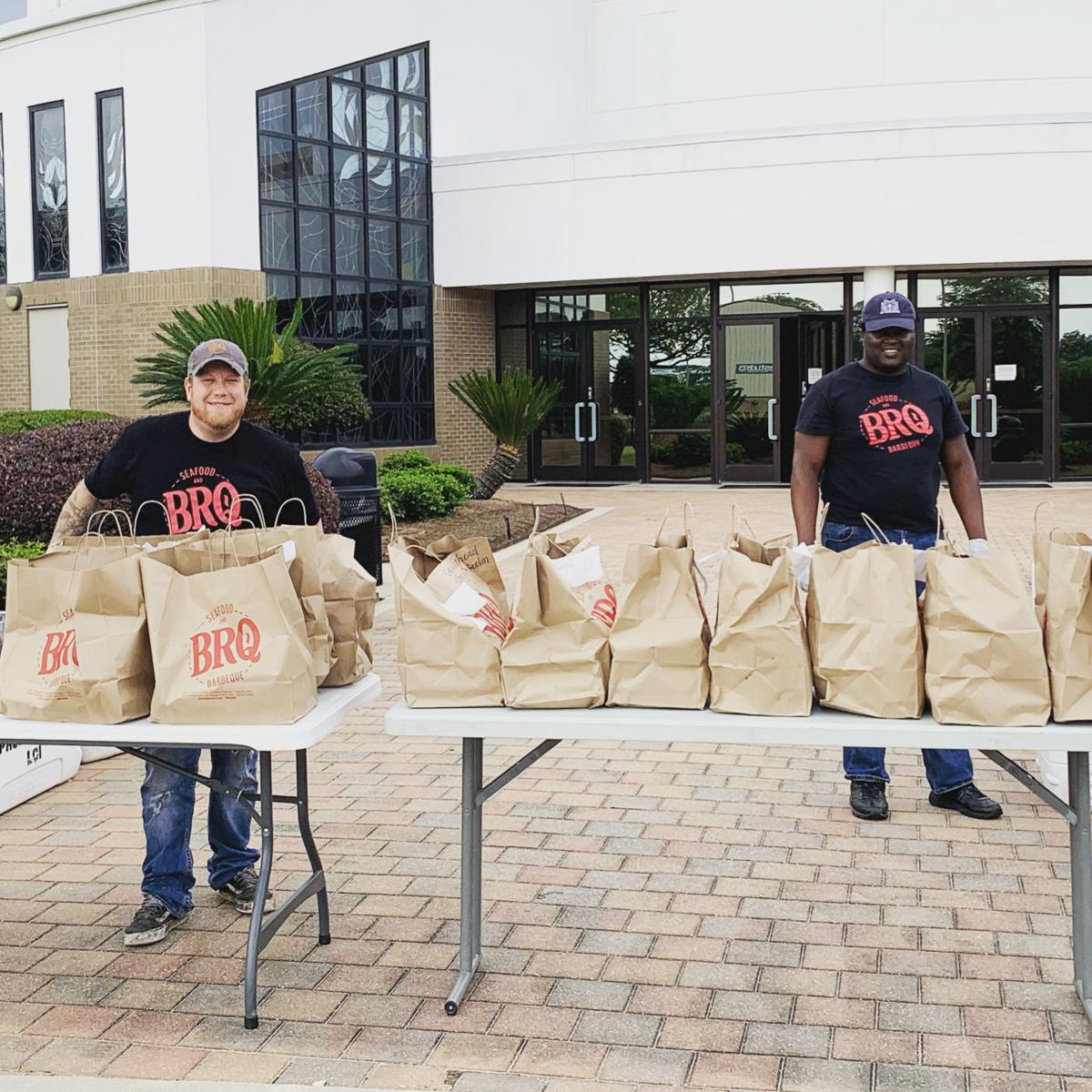 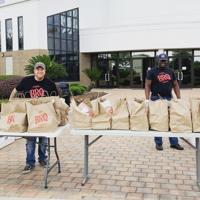 Members of Istrouma Baptist Church assist with a parking-lot pickup at BRQ. 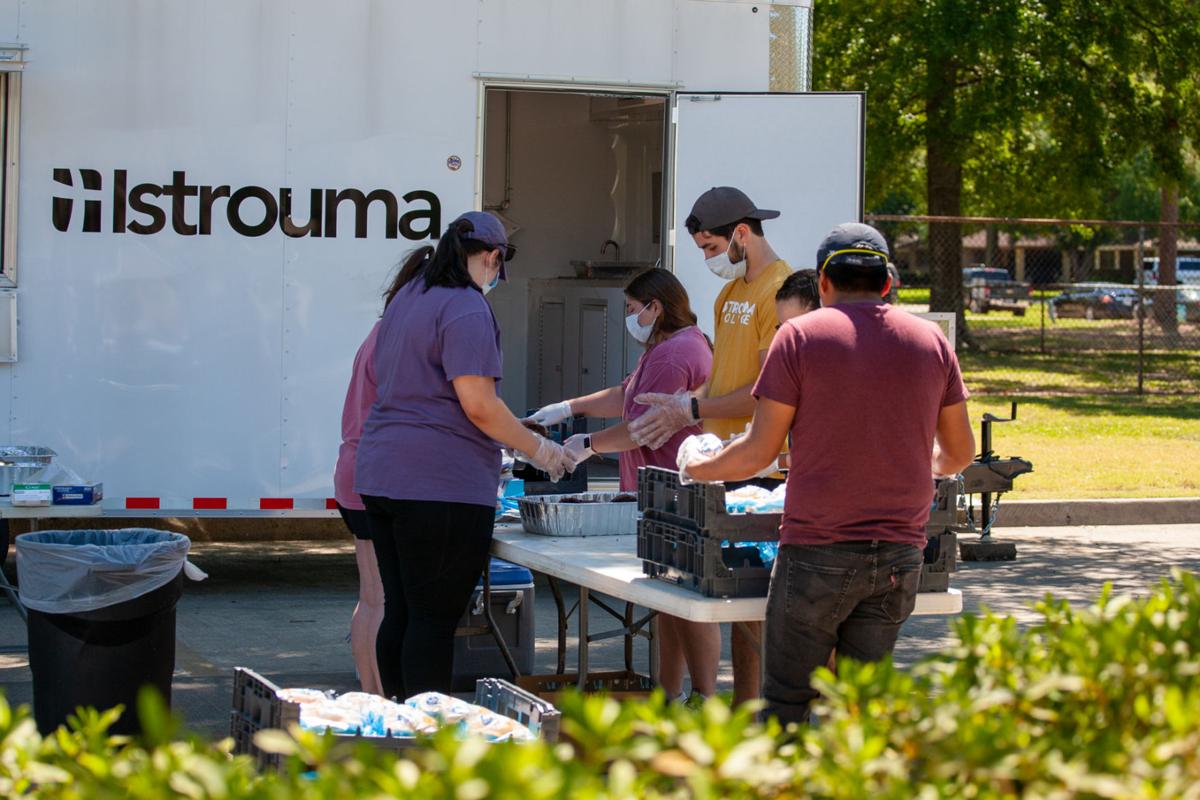 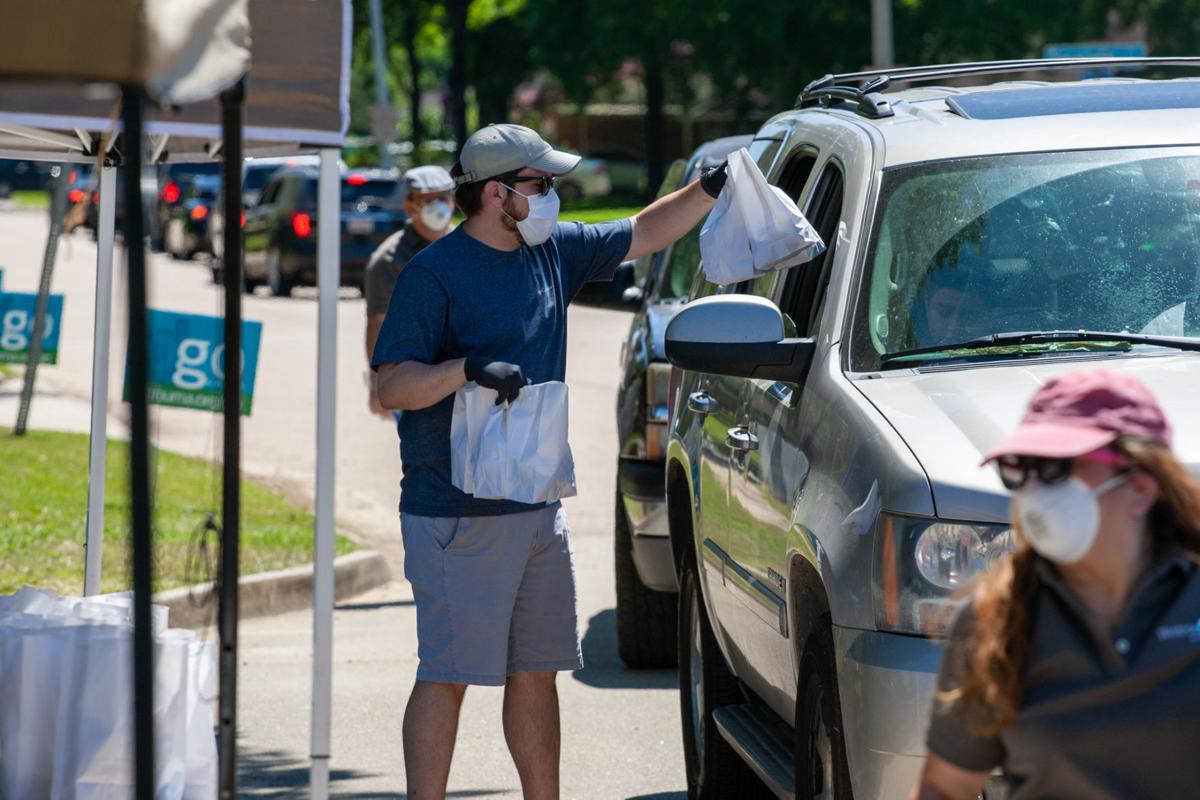 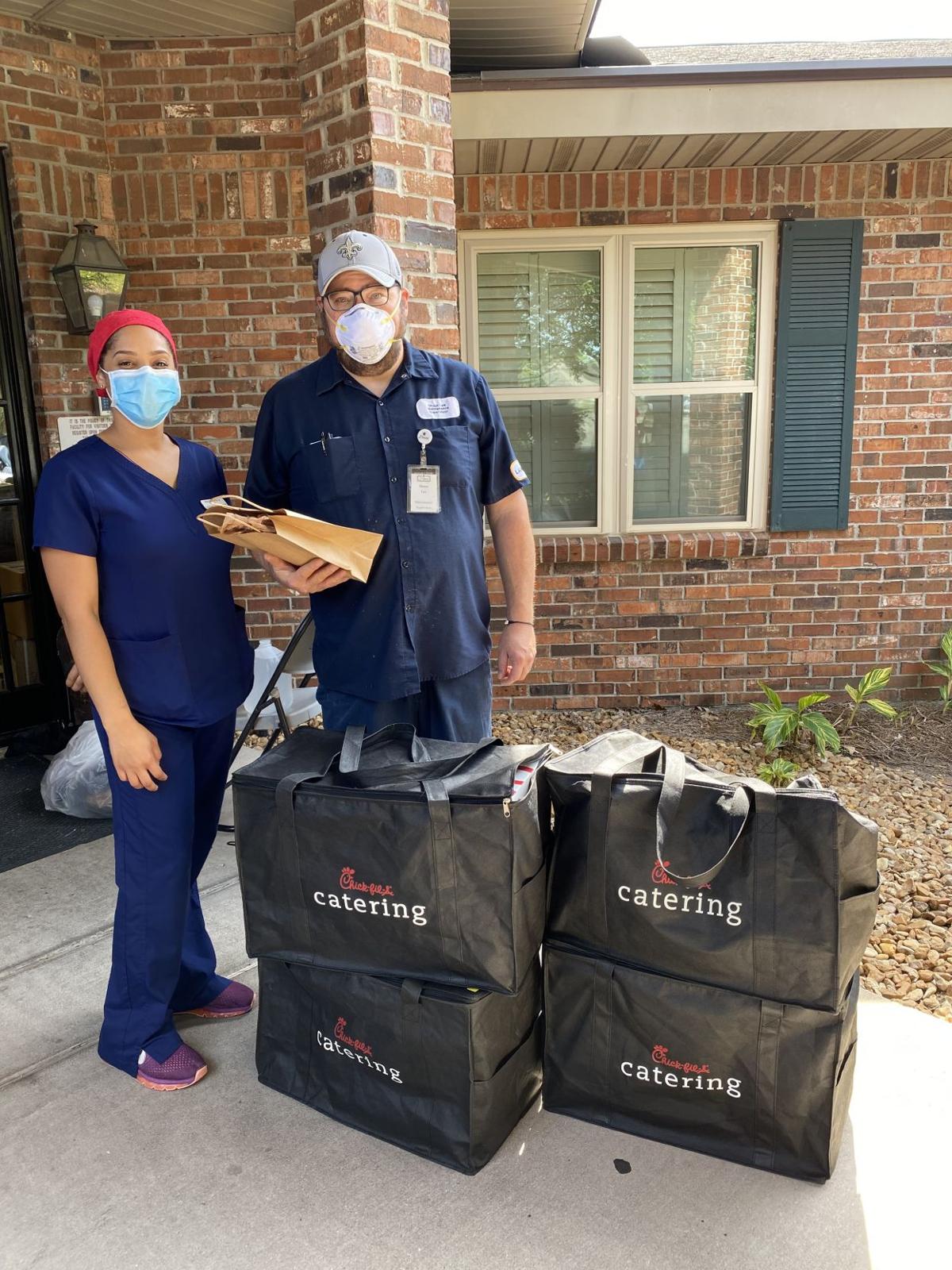 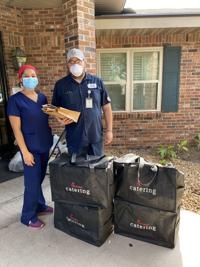 Members of Istrouma Baptist Church assist with a parking-lot pickup at BRQ.

The coronavirus pandemic isn’t the only fight being waged globally.

The people of God also need to cover themselves with personal protection equipment in the spiritual fight taking place upon the earth, said the Rev. Henry J. Brown in a rousing Sunday message titled “The War is On: Dress Up and Arm Yourselves.”

Brown’s words were frequently met with the honking horns from 80 to 100 vehicles.

Brown has been holding services for both churches in the lot parking of First Emmanuel, 575 Education St., since the state limited large in-person gatherings in March to slow the spread of the coronavirus. Brown also shares Sunday services and Wednesday night Bible study on Facebook Live and conference calls. He plans to continue the parking lot services until at least early June.

The 69-year-old pastor based his message on Ephesians 6:10-17 in which the Apostle Paul urges believers "to put on the whole armor of God” to prepare for a battle that "is not against flesh and blood but spiritual wickedness in high places."

“Spiritual warfare is real,” Brown said. “There’s a war being waged in the realm of this world between angelic forces of heaven and the demonic forces of hell. … We’re talking about an actual conflict and combat for the soul of men and women. … It's time to dress up. It's time to lock and load. It's time to put on the whole armor of God and stand against the trickeries of the devil."

Brown stressed that a spiritual battle needs to be fought on spiritual terms.

“If there ever was a time for the people of God to dress up and arm themselves, that time is now. But I’m not talking about scrapping ourselves with guns,” he said. “The weaponry is spiritual and is not carnal. Man-made things won’t defeat the devil. I don’t care how many guns you’ve got, you can’t shoot the devil down. We're in a spiritual war, and God has given us spiritual ammunition."

In Ephesians 6:14-17, Paul lists the armor that Christian soldiers need to put on for the fight. It includes "the belt of truth buckled around" the waist, "the breastplate of righteousness in place," "feet fitted with the readiness that comes from the gospel of peace" and "the shield of faith, with which you can extinguish all the flaming arrows of the evil one."

Completing Paul's list is "the sword of the Spirit, which is the word of God."

Standing firm is vital because Satan is attacking believers from all sides, Brown said.

In such a fight, there's no place for cowardly soldiers, said Brown, a veteran who was in Vietnam at age 19.

"I had to be a man, and I had to stand. I couldn't be a coward. I had to fight," he said. "So I still got that mentality. I fought for the United States of America; now, I’m going to fight for God."

Brown takes that fight to the parking lot, despite those who question his health safety.

"People say, 'You're going out there putting yourself out on the parking lot. You don't know where corona is.' I know where God is," he said.

If God could save him from the streets, God will cover him now, Brown said.

"He didn't let me die when I was serving the devil, when I was out partying all night, getting drunk, didn't know how I made it home, wasn’t living a godly life," Brown said. "People would lift me up then and say, ‘Boy, you’re some crazy. Now, I'm crazy. I’m just strung out for the Lord."

Too many believers point their weapons at the wrong target, instead of the real adversary, Brown said.

"The enemy is not your neighbor, but the enemy is Satan," Brown said. "Our enemies are not those other denominations. … I'm sick and tired of denominations fighting each other. When we get to heaven, (there isn't) going to be no denomination better than the other. If you believe in Jesus Christ, that's good enough for me. I just know what God called me into, and I'm not going to fight you because you are my brother; you are my sister."

In the spiritual fight, some believers are even turning away from God.

"We're turning in the church. We're finding more enjoyment in the pleasures of this world than we do in seeking first the kingdom of God and his righteousness," Brown said. "It's time to turn back to God."

During these days of the pandemic, God is giving people an opportunity to turn to him.

"God is giving us a warning sign," Brown said. "And if you don't take this warning sign seriously, God's gonna throw another plague until we get better."

Brown closed by sharing the most important aspect of the spiritual battle.

"The war is on, but it's a fixed fight," he said. "We're already winners. Who can match the power of God? So dress up and arm yourself. The victory shall be yours."

Brown urged members to keep believing and hoping in God as they prepare for a return inside the churches.

"What the devil meant for evil God meant it for our good," he said. "When we go back into the sanctuary, God has cleansed his holy house. It's being cleansed. Let's not bring dirt into it."

It's always great to hear about all the wonderful things churches continue to do in the community, especially in light of the coronavirus pandemic.

Another example is Istrouma Baptist Church.

The past few months have seen Istrouma in the forefront of several community outreach efforts, including buying lunch for health care or other essential workers while also supporting a local restaurant owner; offering free lunch in local neighborhoods; offering its parking lot and social media audience for locally owned restaurants; buying groceries weekly for Baton Rouge, Livingston and Ascension families who are not able to take advantage of free meals offered by school systems; matching volunteer shoppers with individuals who cannot or should not go to the store to buy groceries; and handing out care packages for health care workers.

“This is an unsettling time," said Terry Bracey, director of missions at Istrouma. "We are living through something that causes a lot of fear and anxiety. People are looking for peace and hope. We know that is found in Christ. Jesus calls us to love our neighbors. Through these small gifts and gestures, we are making connections in the community and encouraging people to seek the one that can bring the peace and hope they are looking for to their souls.”

“I am filled with joy at how the church has served the community during this crisis," added Dwayne Pitre, Ascension campus pastor. "In addition to providing meals for her elderly neighbors, one of our members, Gina Mullens, at her own expense, has sewn over 600 masks and donated them to hospitals, funeral homes, and churches.”

In other Istrouma news, the church leadership teams have nominated members for a pastor search team. Istrouma, celebrating its 100th anniversary this year, is looking for a new senior pastor after Jeff Ginn, its pastor since 2011, left earlier this year to join the International Mission Board.

Philippians 4:6: "Do not be anxious about anything, but in every situation, by prayer and petition, with thanksgiving, present your requests to God."

Two instructions here: Don't worry about anything and pray about everything. I suppose those two directives are among the keys to a peaceful existence — not worrying and keeping in constant communication with God through the power of prayer.

That first one can be tough. It's hard not to be anxious in a time of coronavirus, rampant crime, racial hatred, financial struggles, political discord and more. Those things are real in the world we live in today. But we shouldn't allow the enemy (where all this comes from) let fears and anxiety get the best of us, make us sick, take us out.

Instruction No. 2 is something we all can control: praying. Praying about everything. Presenting everything before an omnipresent God who can hear all of our concerns at the same time. All we have to do is call him with a good "Our Father" or a sincere "Dear God" and just speak from your heart.

Oftentimes, we find that even as we are speaking about those anxieties and fears, God will give us a sense of comfort and peace. I'm a living witness that God answers prayers. In fact, we are all living witnesses because God again woke us up to a brand-new day to witness. Let God handle all your stuff — everything. Pray about it.

How Baton Rouge churches keep their voices during coronavirus? Inside worship's new sound

Is singing in church bad for your health?