Baton Rouge police used an identical set of allegations in most arrests made during protests over the killing of Alton Sterling in July -- a practice some experts say is problematic and bolsters demonstrators' claims that they were indiscriminately swept up as police moved in on crowds.

In 132 of the 176 incident reports of protesters provided by the Baton Rouge Police Department, police used one of two versions of boilerplate language to explain to a judge why each person should be jailed for being in the street, according to a review by The Advocate. As many as 184 people were arrested and spent time in jail but that number includes those detained on unrelated counts.

"During the protest, the Defendant entered the roadway and was provided another verbal order to exit the lanes of travel. After being advised that they were under arrest, the Defendant did actively attempt to prevent being taken into custody," reads one affidavit of probable cause, the text of which is a carbon copy of 34 other affidavits for other arrestees.

Another 98 of the affidavits -- the documents used to justify sending a person to jail -- bear a second, slightly different version of the copied-and-pasted allegations. The arrestees names' and particulars, handwritten at the top, are the only parts that distinguish the reports from one another. 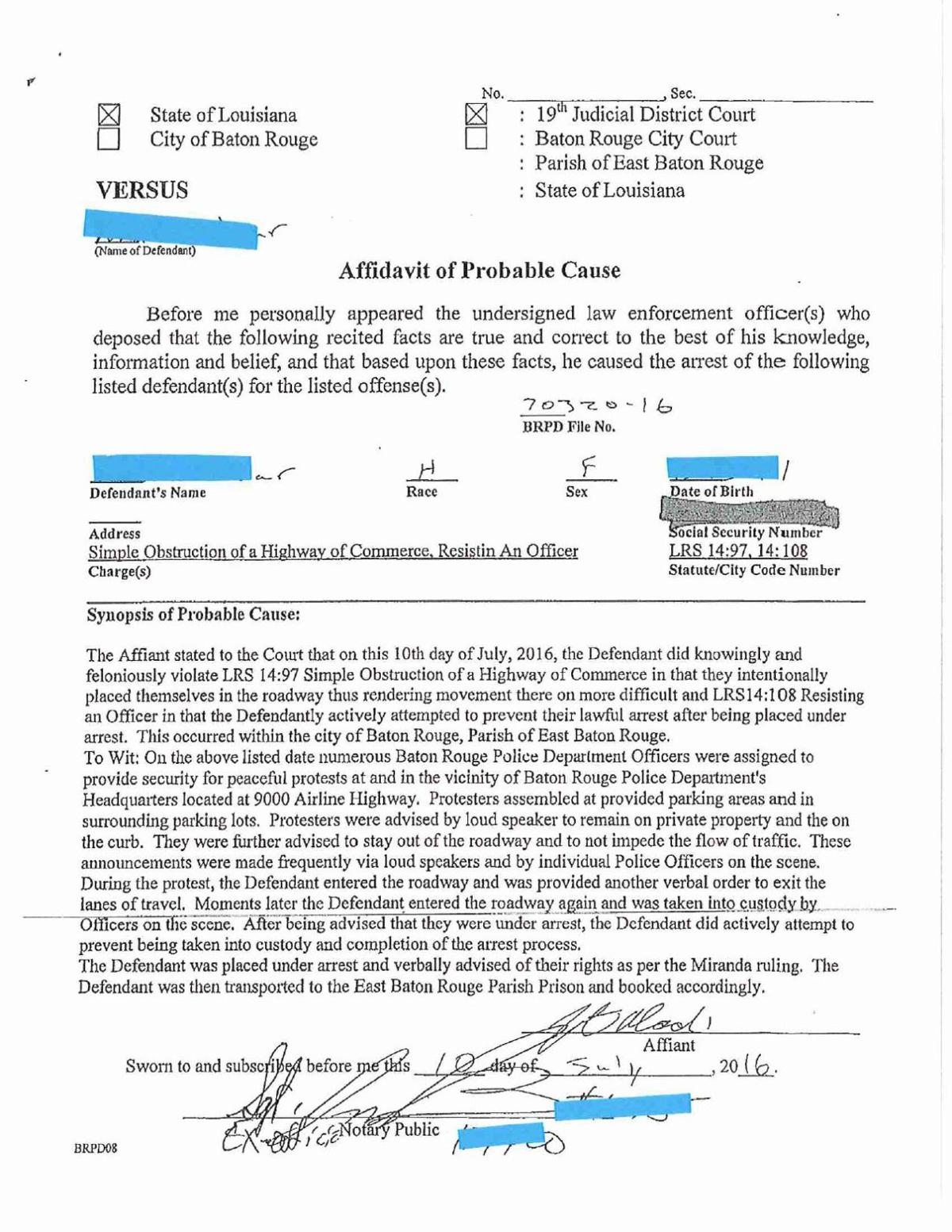 For several days after Sterling, a 37-year-old black man, was killed by a white Baton Rouge Police officer on July 5, hundreds demonstrated in the capital city. Eighty-one percent of those arrested were Louisianians and just over half were from Baton Rouge, according to the documents.

Though East Baton Rouge Parish District Attorney Hillar Moore announced in July he would not pursue charges in 98 of the cases, that doesn't include 52 people arrested on July 10, the last and most confrontational day of the protests.

On that day, police wearing gas masks, riot gear and military-style rifles approached demonstrators on small residential streets in Beauregard Town. If convicted, those who were arrested that day — nearly all of whom were accused of resisting arrest as well as obstructing a road — could face prison time.

Law enforcement officials have said objects were being thrown at officers during the Beauregard Town protest but none of those arrested that day were accused of anything other than obstructing a street or resisting.

At protests outside police headquarters on Airline Highway on previous days, one man was arrested for illegally carrying a weapon, and two women were arrested for hitting or threatening to hit officers, according to documents provided by BRPD and the East Baton Rouge Sheriff's office.

BRPD has said an object thrown at a protest on Airline Highway knocked out an officer's teeth and that eight guns were confiscated from protesters at Airline Highway demonstrations.

Some protesters say they were trying to act lawfully, but when police rushed into the crowd, the action caused innocent people to scatter and get caught by officers. At least two pending federal lawsuits on behalf of protesters allege many of the arrests were made illegally.

The fact that the protesters' affidavits have identical, boilerplate language is a red flag, legal experts said.

"Probable cause requires not just the sense that a defendant may have committed a crime, but that this particular defendant at a particular time and place committed a particular crime," said Scott Sullivan, an LSU law professor who teaches criminal procedure and reviewed arrest reports provided by The Advocate.

"What seems to be missing is a careful consideration of this particular defendant's actions," he said. "That sense (that a crime was committed) is undermined when you just see a repeated narrative over and over again without much deviation."

Because of the mass reproduction of the affidavits, many of the documents have incorrect information. For example, they may show an address of a different protest that had occurred on a different day on the other side of town. Still, officers and judges signed those papers.

Baton Rouge Police Department spokesman Sgt. L'Jean McKneely said the identical affidavits are O.K. because they're only meant as a brief description to a judge that a crime is believed to have occurred. He said officers wrote more detailed descriptions of each arrest, but those reports are not public records.

To complete the more detailed narratives, McKneely said, officers used the affidavits of probable cause to jog their memories, even if the affidavits were the one-size-fits-all summaries.

He said the practice doesn't pose a problem because the actions of the protesters were nearly all the same, with only the time of day being what distinguishes one arrest from another. Any affidavits that allege incorrect information can be fixed later in the judicial process, he said.

"Anyone who feels that something was unjustly done, they need to file a formal complaint," McKneely said.

Moore, the district attorney, said he reviewed the more detailed, tailored reports by police in determining which cases to drop, but said he could not provide them because the files are intertwined with those still under consideration. He added that in the cases he's not pursuing, he's simply taking no further action, and defendants who want records expunged need to start that process on their own.

Regardless, the affidavits of probable cause — many of which had the boilerplate text— are the documents that justify sending a person to jail.

But some demonstrators say these affidavits bear no resemblance to their actions, including the add-on allegations that they resisted officers.

"I was out there getting other people to do what the police were saying to do at that specific moment in time," said Akeem Muhammad, a 24-year-old student who was arrested at the Beauregard Town rally on July 10. "I'm literally grabbing people and telling them to leave, away from the police officers."

Muhammad, who is involved in one of the federal lawsuits, said he was "bumrushed" by officers and thrown to the ground, kneed on his neck and back, and that he was compliant, fingers splayed open. He said the arresting officers didn't read him his Miranda rights, interview him or stay with him to write their report. Instead he was shipped off in a paddywagon, eventually landing in East Baton Rouge Parish Prison.

"In the first 30 or 40 minutes of us being there, they didn't even know what to charge us with," Muhammad said. "They were totally unprepared for what it was that they were doing."

McKneely said he couldn't comment on specific allegations but said that ironing out the facts of each incident is where the court system comes into play.

"Once they have their day in court, they can plead their case," McKneely said.

But the onus is still on police to articulate specific probable cause, said John DiGiulio, a criminal defense attorney in Baton Rouge.

"(Police) were basically bending the rules to affect what they believed to be crowd control. They weren't really making legitimate arrests based on individualized probable cause," he said. "I think there's a pretty good case to be made that they were just bending rules and doing a roundup."

Baton Rouge Police Union spokesman Sgt. C. Bryan Taylor did not respond to multiple requests for comment. Baton Rouge Mayor-President Kip Holden said he would not comment on the arrests or police tactics since some of the issues involved are subject to pending litigation.

Several requests to the International Association of Chiefs of Police for general insight on police perspective with regard to probable cause didn't yield a response.

For Max Geller, a 32-year-old community organizer, even a win at trial wouldn't erase the physical and psychological injuries he said he sustained from officers.

Geller, who still faces state charges and also wrote a declaration in one of the federal suits, said he was standing in the road next to a median on East Boulevard in Beauregard Town when he was blindsided by officers, who "smashed" him to the pavement. A photograph of his arrest published at Salon.com shows an officer in a gas mask placing a hand over Geller's eyes and nose as others hold him down. A hospital record Geller provided shows he suffered a concussion and head lacerations.

McKneely said he couldn't comment on those allegations, but he said some protesters were throwing bottles and spitting in officers' faces. "They were being very unruly," he said.

Geller, like other demonstrators, said he didn't see any indications of violence toward officers. He saw it as the other way around.

"We literally stood still and waited for the first row of police in riot gear to beat us," he said. "This was by definition, non-violent, direct action, passive resistance to an unlawful order."

Geller said his head was bleeding immediately after police apprehended him.

He added: "You know how football players act in the tunnel before a big game? You can see them hitting each others' helmets and slapping each other in the arm to get each other pumped up? That was exactly what the police in riot gear were doing before they got the order to start grabbing us," Geller said. "It was like, 'Get psyched.' And that in retrospect is the most terrifying part."