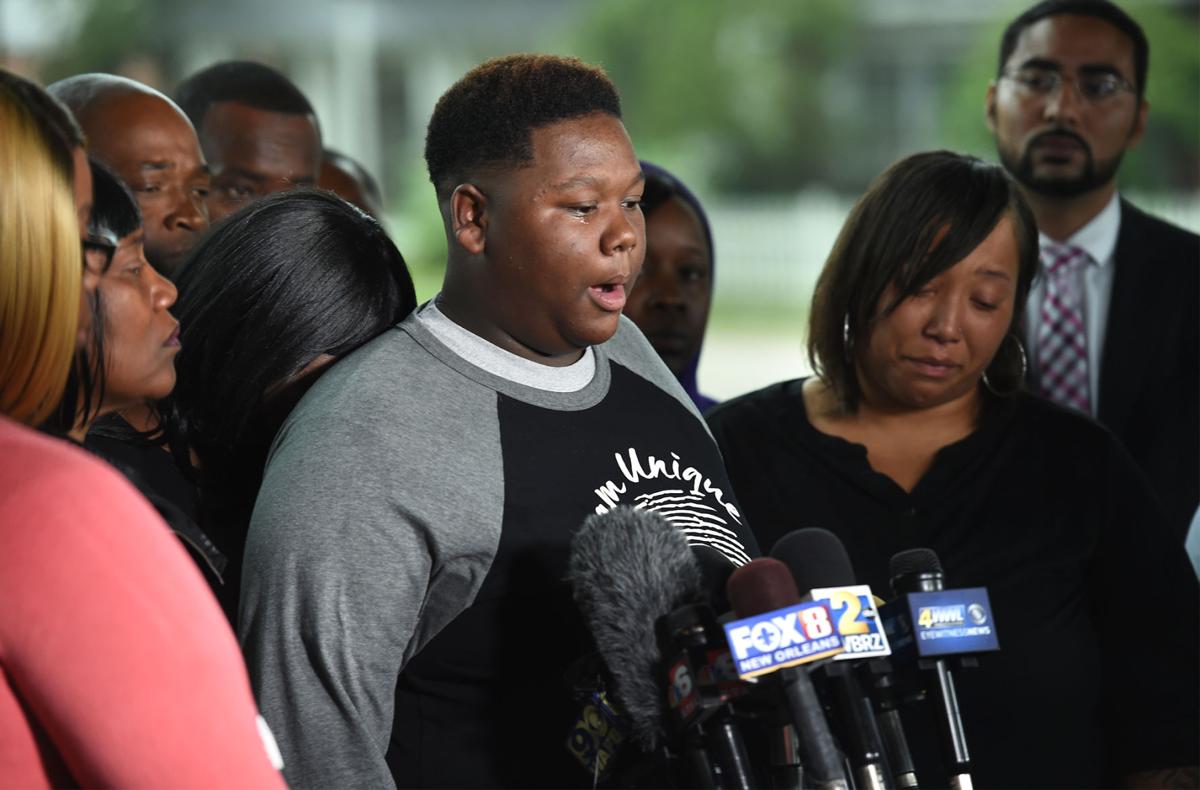 A tearful Cameron Sterling, son of Alton Sterling, is surrounded by family and attorneys as he speaks to the media after meeting with members of the Department of Justice before the formal announcement in the Alton Sterling case Wednesday. 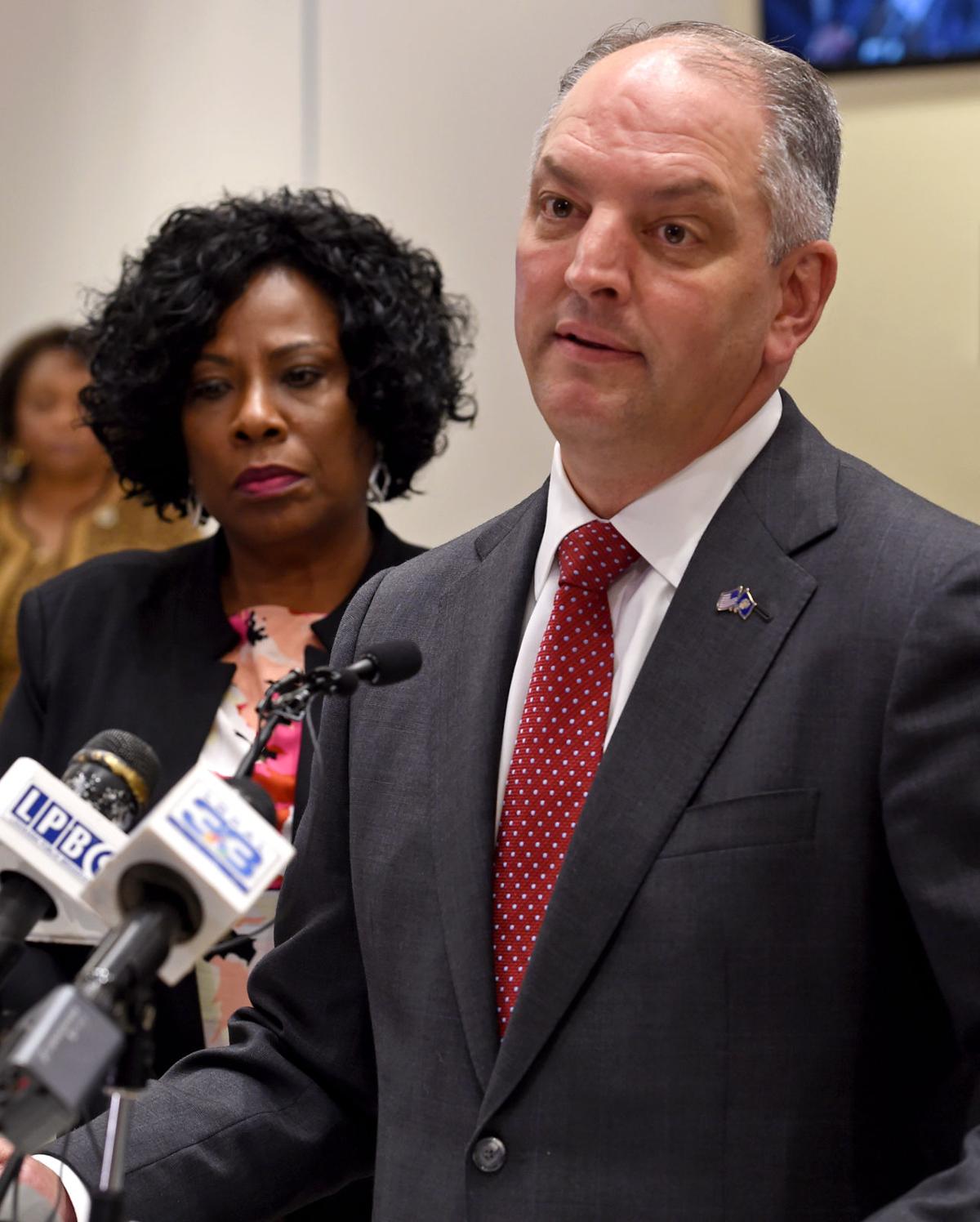 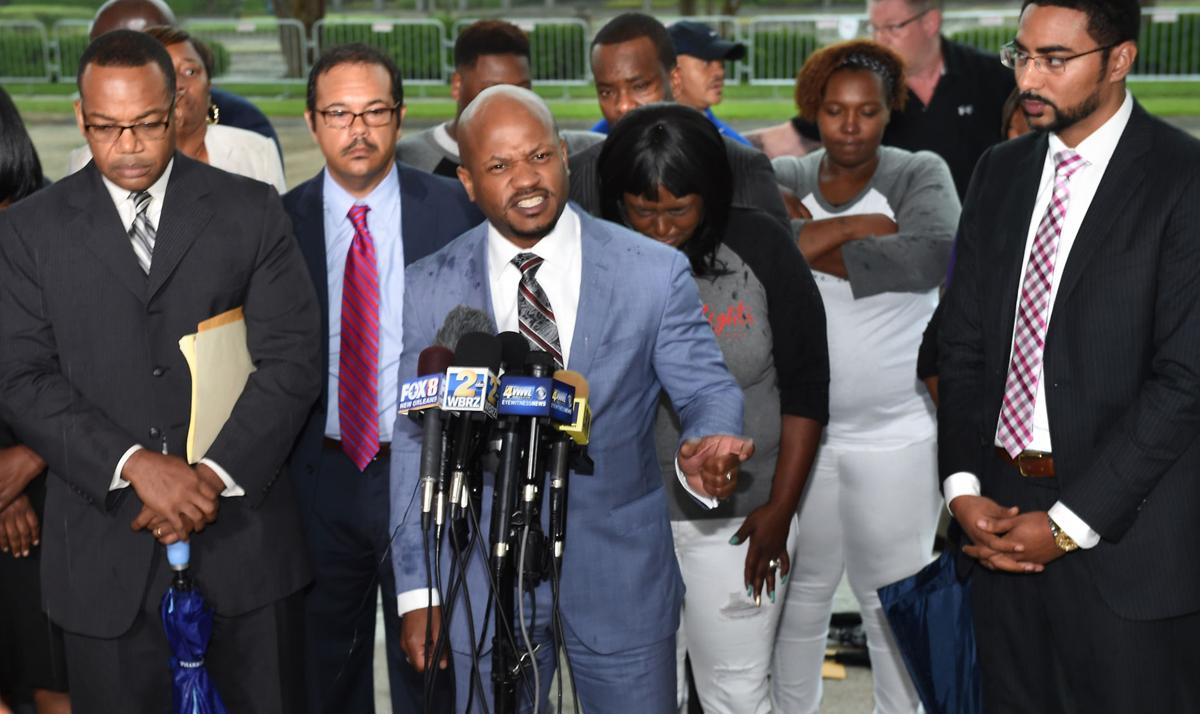 The family of Alton Sterling and their attorneys leave the Russell B. Long Federal Courthouse on their way to talk with the media after meeting with members of the Department of Justice before the formal announcement in the Alton Sterling case Wednesday.

A tearful Cameron Sterling, son of Alton Sterling, is surrounded by family and attorneys as he speaks to the media after meeting with members of the Department of Justice before the formal announcement in the Alton Sterling case Wednesday.

The family of Alton Sterling and their attorneys leave the Russell B. Long Federal Courthouse on their way to talk with the media after meeting with members of the Department of Justice before the formal announcement in the Alton Sterling case Wednesday.

A 10-month investigation into the confrontation with two Baton Rouge policemen that left Alton Sterling dead did not uncover enough evidence to bring criminal civil rights charges, federal prosecutors said Wednesday, emphasizing that the probe left unanswered questions about whether the 37-year-old man reached for a gun before he was shot.

"It is not enough to show that an officer acted recklessly or with negligence or by mistake, exercised bad judgment, used bad tactics or even that the officer escalated the situation where he could have de-escalated," said Corey Amundson, the acting U.S. attorney in Baton Rouge.

To bring charges prosecutors would need to prove officers Blane Salamoni and Howie Lake II — who said they saw Sterling reach for a gun as they struggled in the parking lot of a North Foster Drive convenience store — lied and willfully violated Sterling's civil rights by opening fire, Amundson said, which he called "the highest standard in federal criminal law."

The federal prosecutor cited "insufficient evidence" to contradict either officer's account of the shooting and said there were a number of mitigating factors in the officers' favor: Salamoni and Lake, responding to a report that Sterling brandished a gun, knew he had a weapon. They struggled with Sterling, a much larger and stronger man, and used stun guns before firing their guns.

Amundson, in a 20-minute briefing with reporters the day after news about the Justice Department's decision first leaked out, provided several new details surrounding the less than 90-second encounter in the parking lot of Triple S Food Mart on North Foster Drive, where Sterling had been peddling bootleg CDs.

Salamoni shouted at least twice during a struggle on the ground that Sterling had a gun, Amundson said, before opening fire. Lake, who didn't fire his weapon, recovered a loaded .38-caliber revolver from Sterling's pocket moments after the shooting.

When Salamoni first pulled the trigger, Sterling's right arm could not be seen in any of the several videos reviewed by the Justice Department, Amundson said, making it all but impossible to prove that the officer hadn’t reasonably perceived a threat in the moments before the shooting.

"We would have to prove beyond a reasonable doubt that Officer Salamoni did not believe that Mr. Sterling was actually going for a gun when he made that statement and he simply decided to shoot," Amundson said.

As federal officials laid out details of their case inside the downtown federal courthouse, Sterling's relatives and their attorneys held their own news conference under Interstate 110, using the overpass to escape driving rain. After months of receiving no updates on the investigation, the family met with federal officials Wednesday morning to discuss the reasons the government would not be pursuing civil-rights charges.

Attorneys for the family echoed and expanded upon Amundson’s remarks, saying federal authorities all but apologized for Salamoni’s actions even as they said the shooting did not meet the threshold for a federal prosecution. They portrayed Salamoni as an officer who dramatically escalated the situation within seconds of encountering Sterling.

One of the attorneys, L. Chris Stewart, who represents Sterling’s oldest two children, said that federal authorities told the family that Salamoni almost immediately drew his gun and pointed it at Sterling’s head, warning “I’m going to kill you, bitch.”

"Officer Salamoni doesn't need to have a badge," said Justin Bamberg, also a lawyer for Sterling's two eldest sons. "If his supervisors and those individuals tasked with hiring and firing officers knew what we heard today, he should have been fired a long, long time ago. "We're going to ask that Officer Salamoni be terminated immediately."

Sandra Sterling, Alton's aunt, joined hands with the mother of his three youngest children, Andricka Williams, the mother of his 10-year-old son, Kimberly Pierson, his son Cameron Sterling and Cameron's mother Quinyetta McMillon as they took turns speaking. Cameron Sterling, Alton Sterling's oldest son, said he still thinks of his father daily, and has accepted a new role caring for his siblings in his absence.

Sandra Sterling later broke down, just before being led away by a group of supporters.

Cameron Sterling's mother, Quinyetta McMillon, tearfully pleaded for the state to prosecute this case. "Jeff Landry please, open up your heart, your eyes, and give us the justice we deserve."

Attorneys for the officers — who've remained on paid administrative leave since the shooting — welcomed Wednesday's announcement, saying it provided relief to the men and their families.

"I don't think I can say it any better than the United States Attorney said it: There was a thorough, exhaustive and long investigation and it was unanimous," said John McLindon, Salamoni's attorney, who added that he expects Landry to reach the same conclusion after reviewing the evidence.

"This has been a really trying time for Mr. Salamoni and his family," McLindon said. "They've been under a tremendous amount of stress and pressure. They're glad to have this part behind them and now we'll address the state court investigation."

When asked about the "I'm going to kill you" comment, McLindon said, "If that's on the video, the government didn't feel like it warranted a prosecution." He also noted that Amundson said the government used two national use-of-force experts who also reached the conclusion that federal civil rights charges could not be proven beyond a reasonable doubt.

Amundson's statement also said that the experts "criticized aspects of the officers’ techniques," but McLindon said he could not comment on that, saying it "would be between the officers and their superiors." Along with the potential of state charges, the officers also face possible internal discipline within the Baton Rouge Police Department.

Fred Crifasi, an attorney representing Lake, said his client is "relieved" by the conclusion of the DOJ investigation, but will refrain from public comments through the state case.

Wednesday’s announcement prompted criticism from community leaders and new calls for change at the police department. Together Baton Rouge, a faith-based non-profit organization, demanded the release of all videos related to the shooting.

“It appears that no longer can local communities depend on our federal government to balance the scales of justice,” said the Rev. Lee Wesley, pastor of Community Bible Baptist Church, criticizing a leak of the Justice Department’s decision earlier in the week.

The mayor-president's actions and statements over the past few days have stood in sharp contrast to that of her predecessor, Kip Holden, who never met with Sterling's family and who was noticeably absent in July 2016 debates about whether Baton Rouge needed police reform. Broome met with Sterling family members on Tuesday evening and on Wednesday reiterated her desire to see BRPD officers go through different training.

She said all officers will soon receive implicit bias training meant to make their police work fairer and more impartial. And she reminded the public about her additions to BRPD's use-of-force policy in earlier this year and the Metro Council's recent authorization to spend $2.25 million to outfit all officers with body cameras.

"We owe it to the memory of Alton Sterling, to his family and to our community to make changes that make Baton Rouge a just and equitable city," Broome said.

Both Broome and Gov. John Bel Edwards expressed frustration Wednesday with Tuesday’s leak of the Justice Department decision. Edwards said he hopes the leak of the decision to the national media is investigated.

“Peace but not quiet,” said the Rev. Nathan Ryan of the Unitarian Church of Baton Rouge. "There’s no better city than Baton Rouge and no better state than Louisiana to be a model for what justice-making looks like to the entire country.”

So, where are we now that the U.S. Department of Justice has “officially” announced that the two Baton Rouge police officers involved in the s…

Small, but vocal, group marches outside of BRPD on Saturday to protest Alton Sterling decision

A small but vocal crowd gathered outside the Baton Rouge Police Department headquarters Saturday to protest the death of Alton Sterling.

As the city continues to cope with the fallout of the July 2016 police shooting death of Alton Sterling, people gathered at a Baton Rouge chur…

At GOP luncheon, theories on Alton Sterling's death hinge on who's making the case

A group of Baton Rouge Republicans and three black community leaders traded theories Tuesday on what led to Alton Sterling's death, whether he…

The attorneys for the children of Alton Sterling, a 37-year-old black man who was fatally shot by a white Baton Rouge police officer, have ask…

Two Baton Rouge police officers served suspensions in September for separate, racially-charged comments each made during the first week in May…