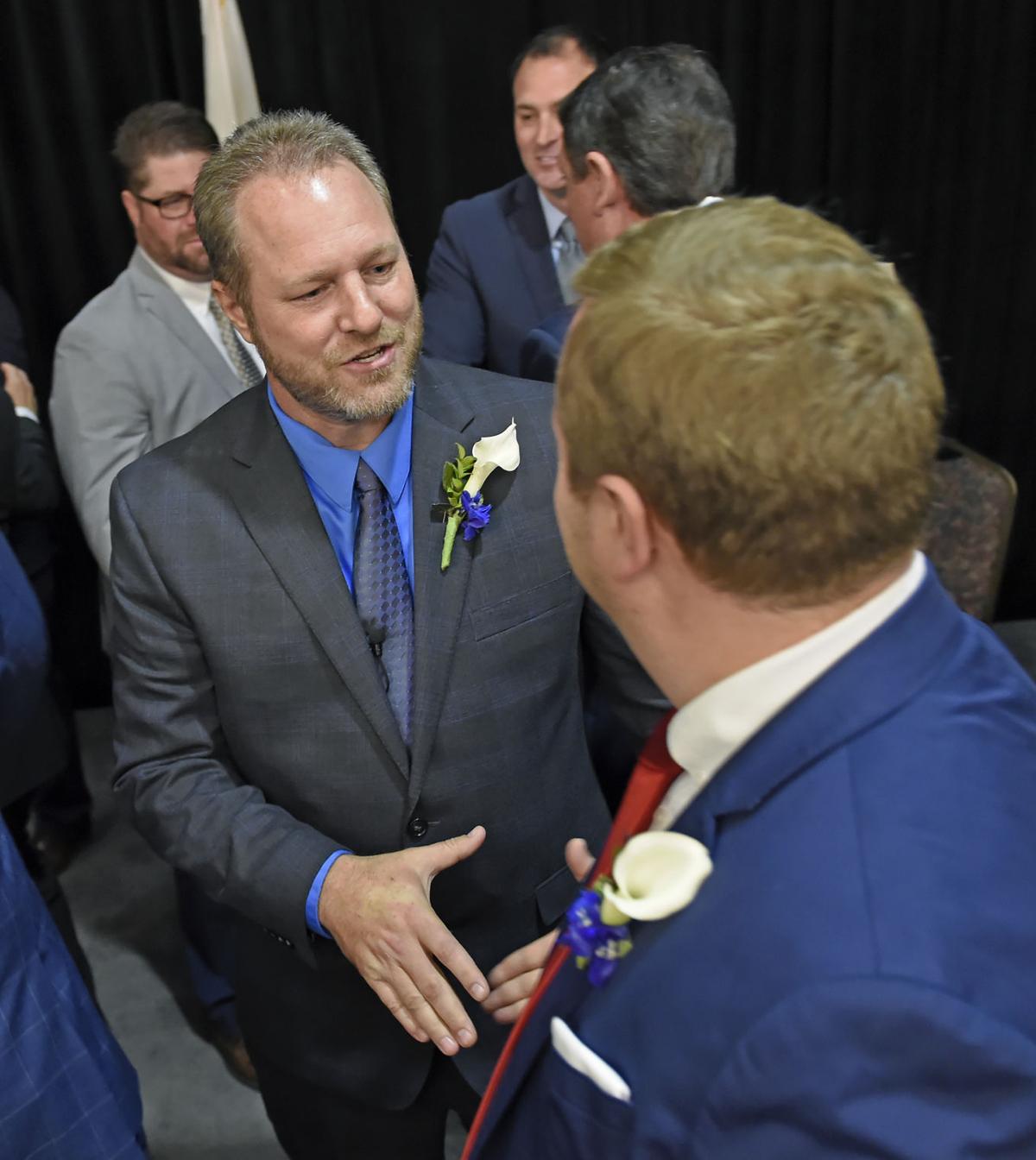 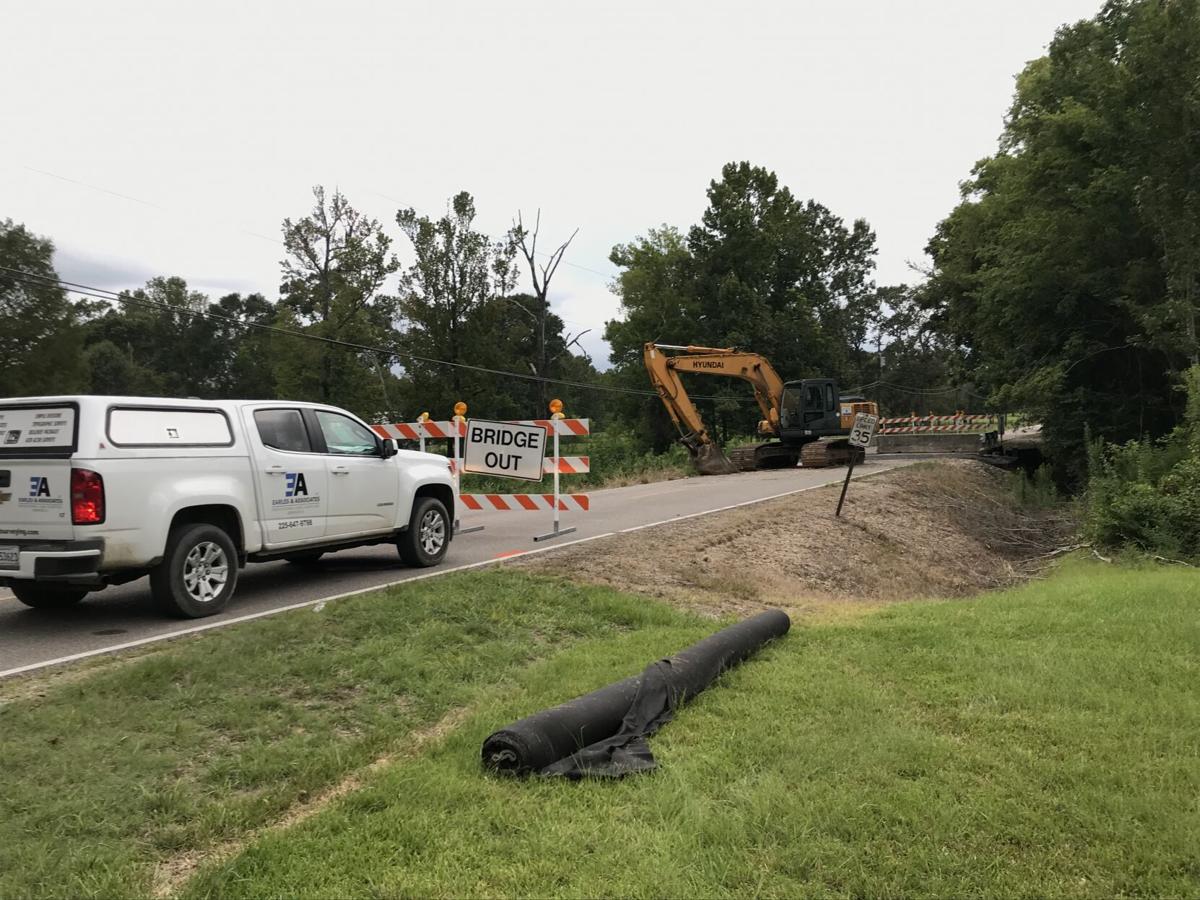 The Manchac Acres Road bridge as seen Wednesday, Aug. 11, 2021, remains closed for repairs in Prairieville. Ascension Parish officials plan to replace the bridge with big culverts after washouts happened and they learned the old, small bridge was constricting drainage. 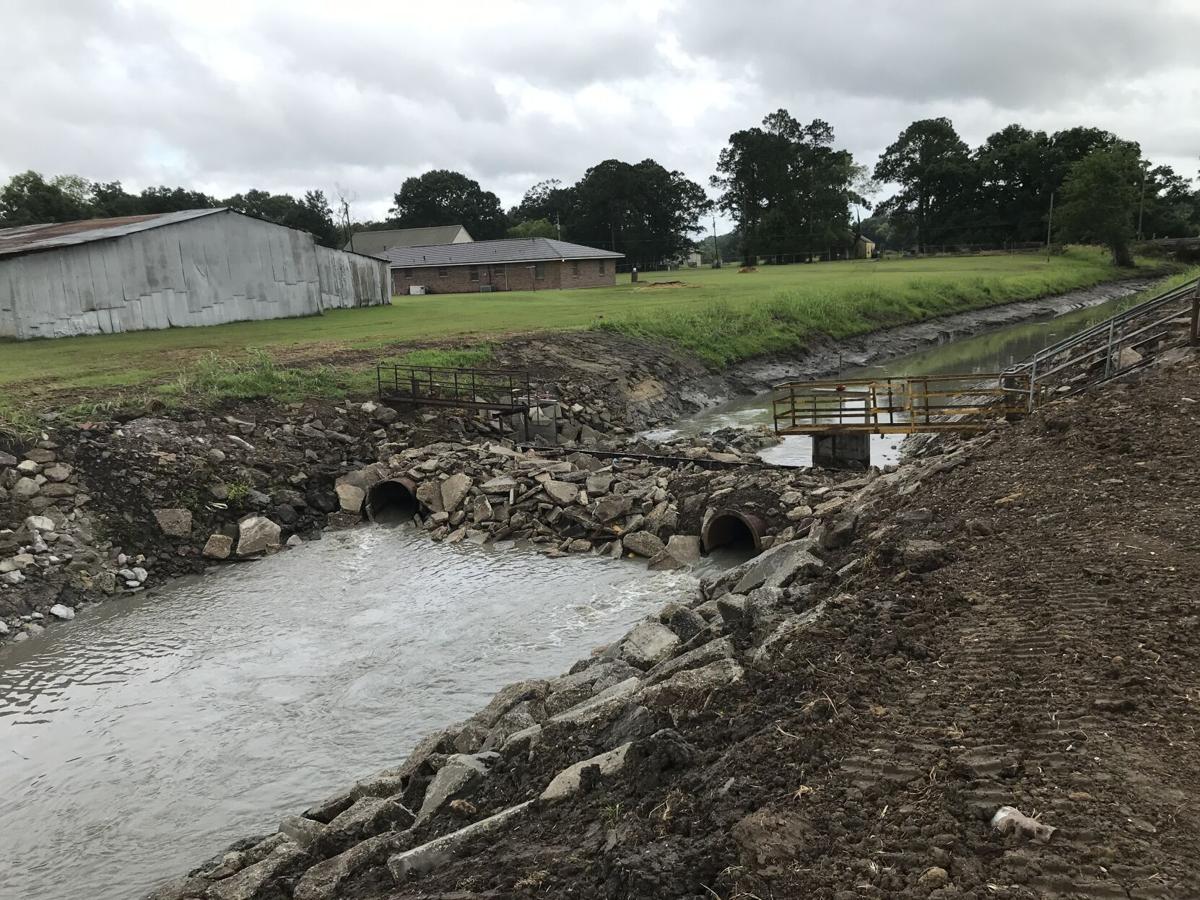 The control gates cut through the newly modified Smith Bayou weir are open and flowing on Friday, June 18, 2021, ahead of a tropical disturbance then brewing the Gulf of Mexico. Ascension Parish drainage officials had finished modifications of the longstanding weir a day earlier as part of a broader plan to extend the reach of regional drainage pumps in the parish. 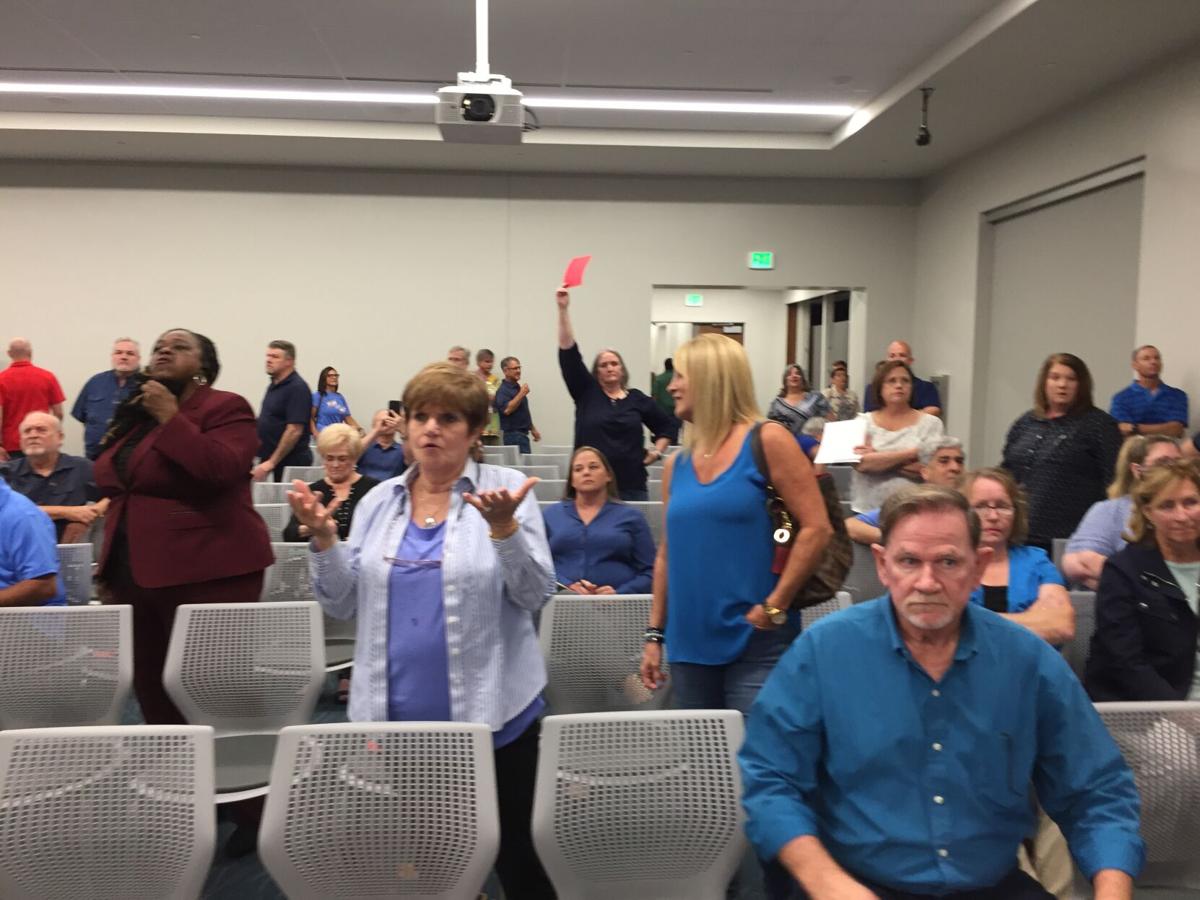 Members of the public erupt in disbelief after some members of the Ascension Parish Council voted to strip Parish President Clint Cointment of his role overseeing drainage work in much of the parish.

The Manchac Acres Road bridge as seen Wednesday, Aug. 11, 2021, remains closed for repairs in Prairieville. Ascension Parish officials plan to replace the bridge with big culverts after washouts happened and they learned the old, small bridge was constricting drainage.

The control gates cut through the newly modified Smith Bayou weir are open and flowing on Friday, June 18, 2021, ahead of a tropical disturbance then brewing the Gulf of Mexico. Ascension Parish drainage officials had finished modifications of the longstanding weir a day earlier as part of a broader plan to extend the reach of regional drainage pumps in the parish.

Members of the public erupt in disbelief after some members of the Ascension Parish Council voted to strip Parish President Clint Cointment of his role overseeing drainage work in much of the parish.

Since the East Ascension drainage panel voted to remove the parish president as head of drainage this summer, a clutch of council members and the president have been privately negotiating a new power-sharing arrangement that would oversee drainage for more than 117,000 people.

Council members have said the new deal they were working toward would have brought in the professional drainage manager that council members had been seeking but would also have kept Parish President Clint Cointment and future Ascension executive leaders in the mix.

It appears any agreement is off for now.

In a move that caught Cointment and council members by surprise, Councilman Dempsey Lambert, the drainage board chairman, sent the parish president a 60-day notice on Thursday informing him that he would be terminated as drainage director.

The drainage board vice-chairman, Chase Melancon, didn't even know the letter was coming, he said.

Some council members on both sides of the dispute, including Melancon, have said they believed negotiations were closing in on a deal.

At least one other, though, said the letter was sent because he believed Cointment hadn't been negotiating fully and important sticking points remained, including hiring and firing authority over drainage employees.

Councilman Aaron Lawler said he believed negotiations had already ended and Cointment didn't respond to the drainage board's latest offer for a deal.

"And even during negotiations, it never felt (like) there was a good faith effort to find a compromise on his end, so I think, at this point, the direction that I wiling to take, speaking for myself, is that we're going to go out and hire a professional," Lawler said.

He noted, for example, that one of Cointment's compromises had been to communicate with the council, something that Lawler said he should be doing anyway and that had been a point of contention for months after the president refused for a time to answer questions from the council during meetings.

Even if the drainage board majority pursue the manager, Lawler said he would also propose that president has a seat on the 10-member drainage board.

A controversial and contentious drainage board vote on June 28 had set this formal notice in motion, but the board for weeks withheld sending the required letter to trigger the president's firing.

Select members of the drainage board had negotiated with Cointment and one another on a new deal.

During this period, Cointment remained the head of drainage and, in public and community meetings, was proposing a variety of new, big-picture drainage plans.

The June 28 vote also helped kick off election recall efforts of the six council members who voted to remove Cointment, including Lawler, Lambert and Teri Casso, the Parish Council chair.

In a statement, Cointment called the termination letter unfortunate because "negotiations have come a long way" but he also left open the possibility that a deal could still be cut.

He said he had received the latest compromise offer from Parish Attorney Kenneth Dupaty on Sept. 15 and was working on response while also dealing with the post-Hurricane Ida response.

Cointment said he has since been informed he had seven days to respond though "nowhere in the email" delivering that offer did it say he had a week to answer.

Based on the seven-day timeline, the deadline for Cointment to respond had been Wednesday.

"Today’s letter was a surprise. Though I have no idea who wrote the latest compromise, nor do many of the council members I spoke to. What I do know is that it was a very good document and something that could, with minor adjustments and legal scrutiny, result into a (permanent) compromise," Cointment said in the statement.

For years, 10 of 11 Ascension Parish Council members have overseen the district's finances and focus, while the parish president has run its day-to-day operations and large number of staffers and equipment under an agreement with the district.

The negotiations had been a reevaluation of that longstanding agreement.

The district, a separate entity from parish government, collects sales and property taxes and provides the drainage maintenance and operations for the east bank of the parish, which includes the city of Gonzales, the town of Sorrento and growing unincorporated areas like Prairieville, Dutchtown and Geismar.

District employees run the large pump stations that drain swaths of the east bank, maintain drainage ditches and canals, and are currently cleaning out bayous and other waterways clogged with downed trees and other debris left by Ida's winds.

Fueled by frustration over flooding, development and the council's rocky relationship with the new Ascension Parish president, two groups file…

The six members who voted to remove Cointment have said they were doing so to take politics out of drainage management and hire a professional manager.

Lambert, the drainage chairman, didn't return a call and text message for comment.

Critics of the June 28 vote — and also of the closed nature of the subsequent negotiations and now the issuance of the termination letter — questioned the entire process that has led to the latest development.

"I mean honestly, for the lack of a better term, I think it is complete bull----. I think that there is majority of the board that is operating behind the scenes and not letting anybody know what's going on. And that's not fair to all the constituents of East Ascension who deal with East Ascension drainage," Councilman Michael Mason said.

Mason, a drainage board member, said he saw the first draft of the new agreement between the district and Cointment but hasn't seen anything since and hasn't been in the negotiations.

Melancon, the drainage vice-chairman, added that, with the exception of three or four items, he had thought the new deal was "pretty much there." He said he hadn't learned why the termination letter was sent and hadn't been given a copy of the letter until after the fact.

Other members, Melancon said, hadn't even seen or been informed about the latest offer to the Cointment.

Drainage concerns helped lead to the filing of a recall petition against Dempsey Lambert, a five-term Ascension Parish councilman who has led …

As the parish president did, Melancon said neither he nor the lawyers working with him on the deal can find any indication that there was a seven-day deadline for the president to respond to final deal.

"It's just irony, right? All this is going on because of the lack of communication between council and administration, and here we are the council and/or drainage commission and we're just going behind each other's backs as well when we're doing these things. It's just a one-way street," he said.

Melancon said he wasn't sure where this left the negotiations.