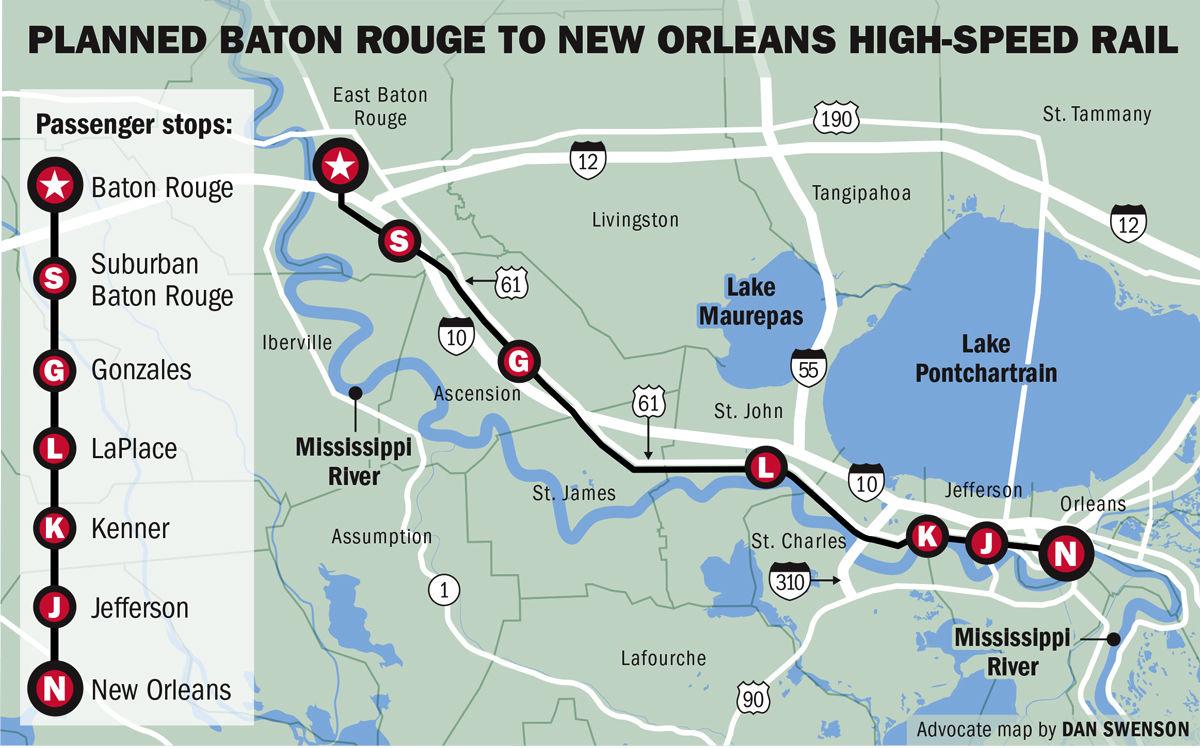 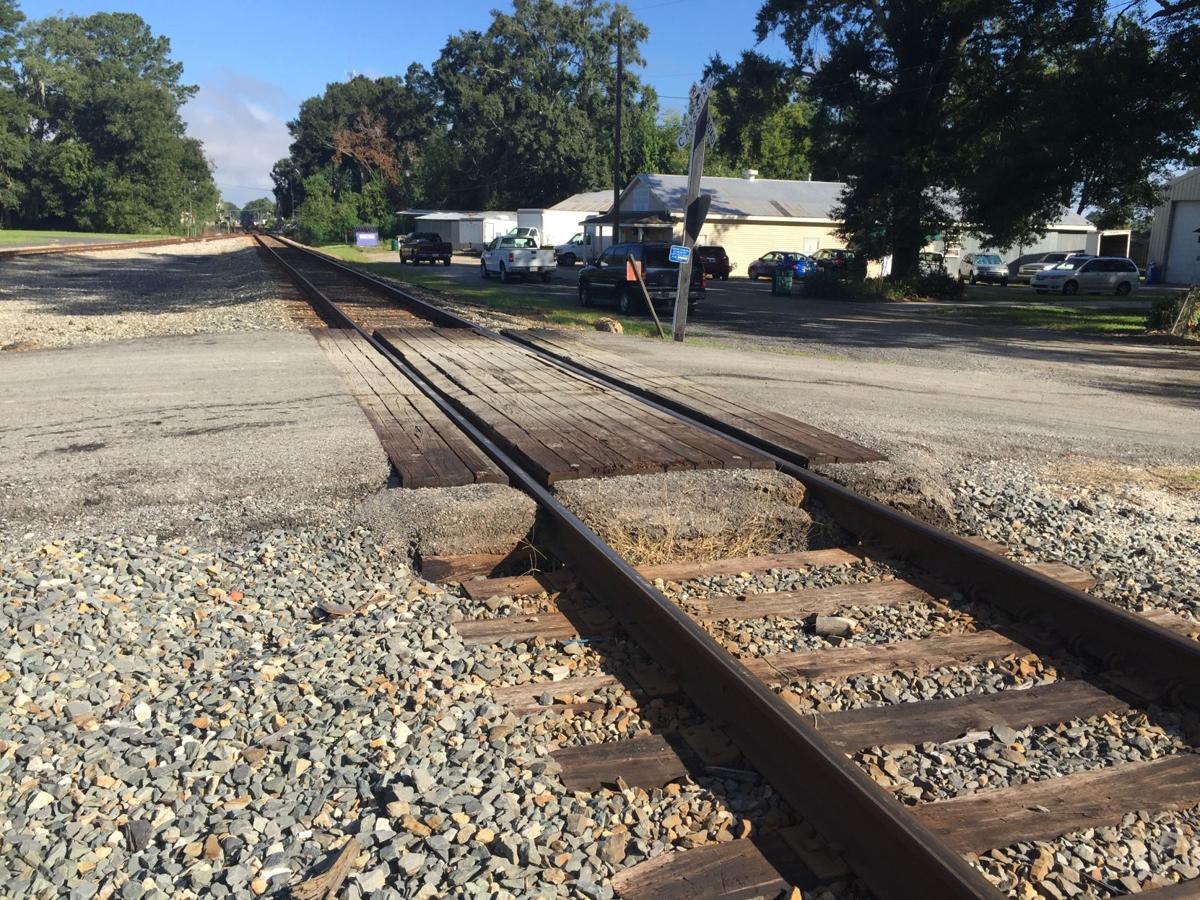 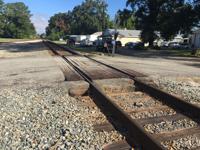 The Kansas City Southern rail line in Gonzales extends to the north to the horizon Aug. 31, 2018. Proposed upgrades to this and dozens of other crossing between Baton Rouge and New Orleans could see more safety devices to prevent train-vehicle collisions 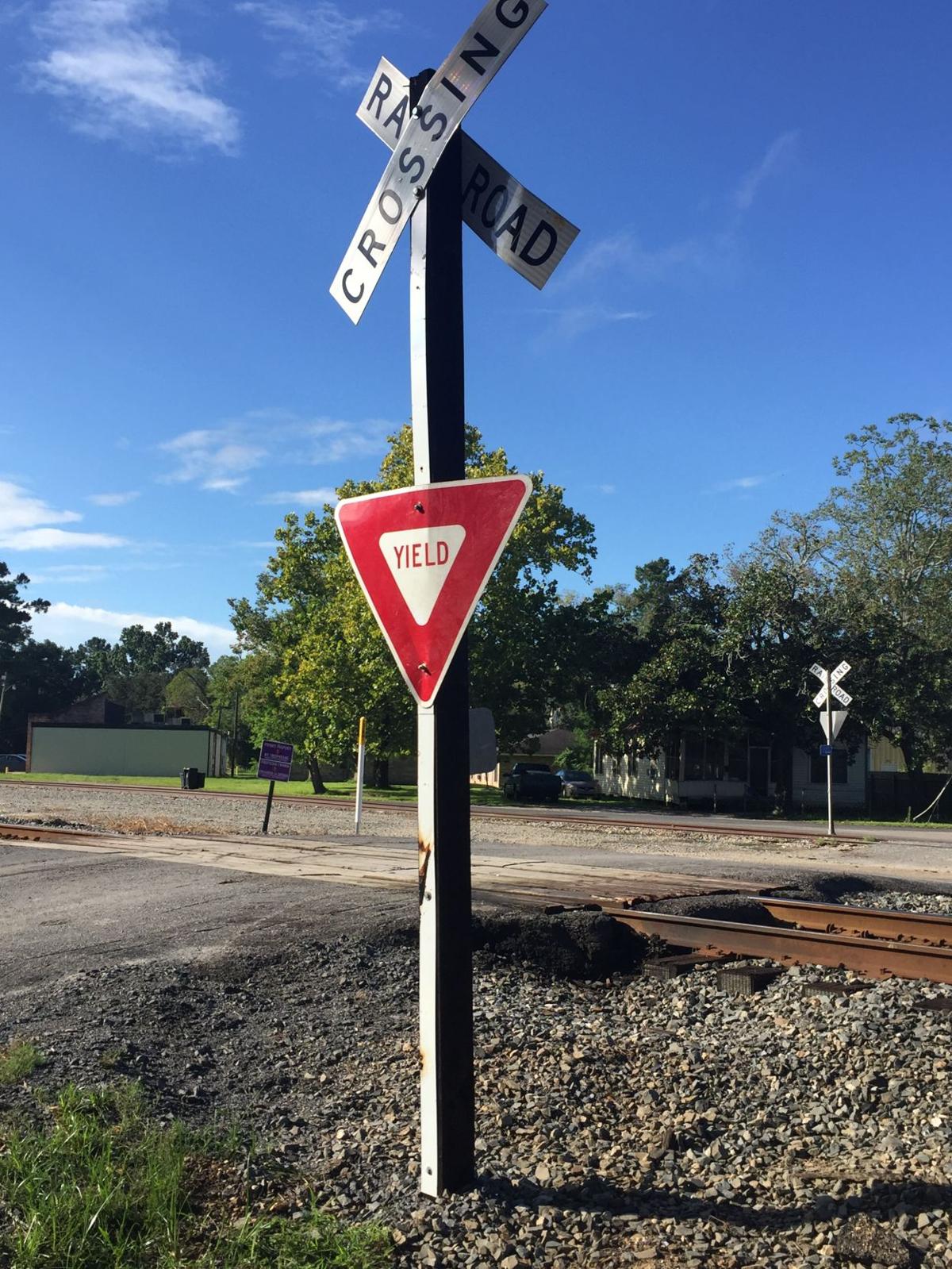 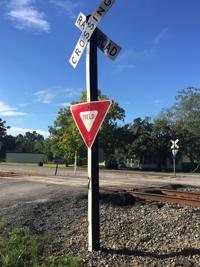 The rail crossing, which is marked by X-shaped crossbucks and a stop sign, would see new crossing arms if a new intercity passenger train were established between Baton Rouge and New Orleans. Plans call for building a new train depot at the crossing, seen Aug. 31, 2018, and making it more accessible to pedestrians. 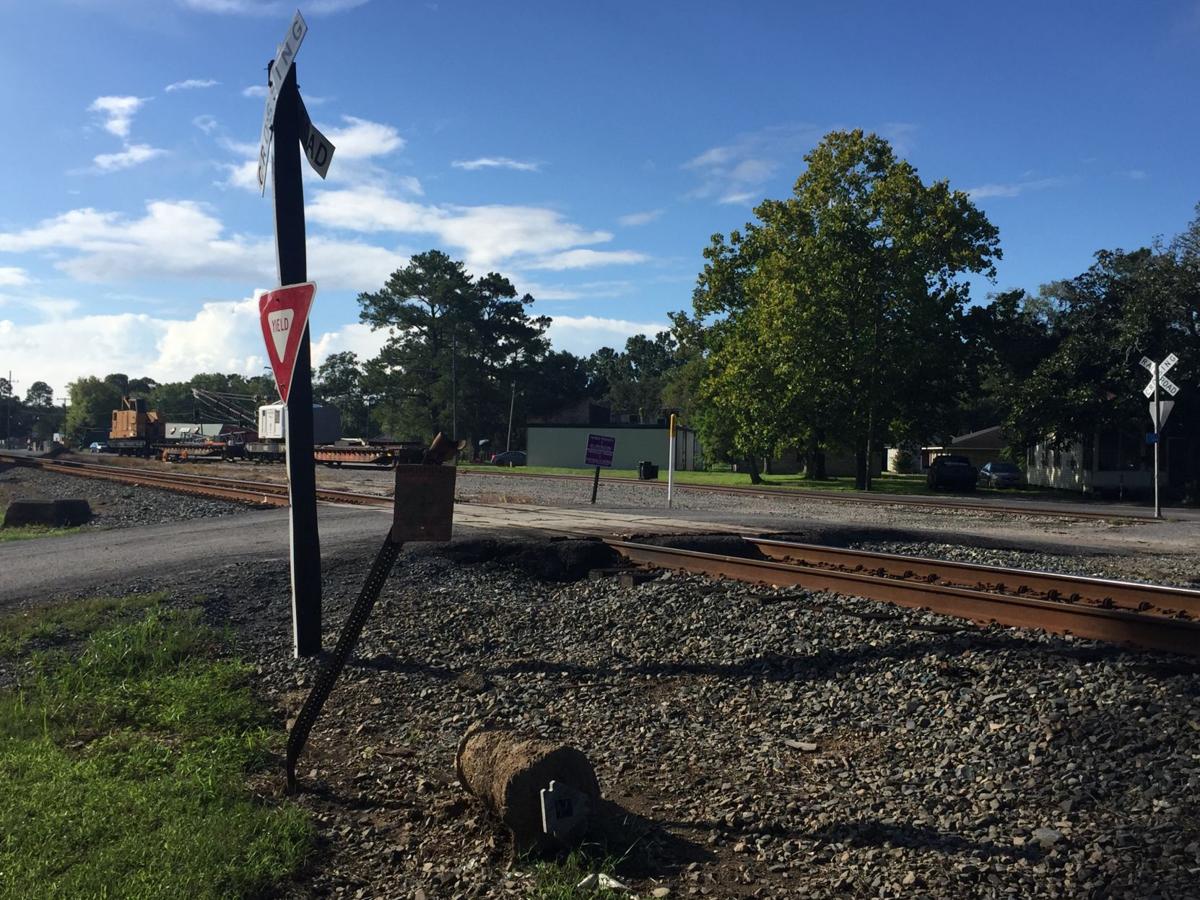 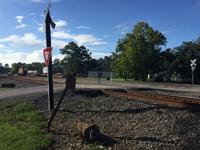 The rail crossing between East Railroad and North Felix avenues in Gonzales is a long one as seen here Aug. 31, 2018, as drivers must cross the main Kansas City Southern line and a short spur. A Baker garbage truck driver was killed at the intersection Aug. 24 when his truck was hit by a freight train.

The Kansas City Southern rail line in Gonzales extends to the north to the horizon Aug. 31, 2018. Proposed upgrades to this and dozens of other crossing between Baton Rouge and New Orleans could see more safety devices to prevent train-vehicle collisions

The rail crossing, which is marked by X-shaped crossbucks and a stop sign, would see new crossing arms if a new intercity passenger train were established between Baton Rouge and New Orleans. Plans call for building a new train depot at the crossing, seen Aug. 31, 2018, and making it more accessible to pedestrians.

The rail crossing between East Railroad and North Felix avenues in Gonzales is a long one as seen here Aug. 31, 2018, as drivers must cross the main Kansas City Southern line and a short spur. A Baker garbage truck driver was killed at the intersection Aug. 24 when his truck was hit by a freight train.

GONZALES — Darlene Wax, owner of Ratcliff's Florist in Gonzales, says she tells departing customers to take care before they cross the Kansas City Southern rail line near her business.

The crossing, which links East Railroad Avenue with her street, North Felix Avenue, lacks crossing arms or flashing lights, and because of the tracks' angle, drivers have a hard time seeing northbound trains.

"I warn all my customers, 'Stop at the crossing. Stop before you get to the crossing,'" she said.

The rail crossing was the site of a deadly train collision late last month that has underscored the safety hurdles for proposed intercity passenger train service between Baton Rouge and New Orleans. The service is backed by the Baton Rouge Area Foundation, Southern Rail Commission, regional business groups and local officials.

The rail link is viewed as a way to bind the two cities economically and culturally, moving riders between the cities in an hour and 20 minutes. Twice daily round trips would run between a future Government Street station in Baton Rouge and the Union Passenger Train Terminal in New Orleans.

The proposed rail services is a scaled-down version of a failed high-speed rail concept that was first first raised in the late 2000s under Gov. Bobby Jindal. The current, slower passenger rail service would use nearly 80 miles of primarily freight lines, including the KCS that runs past Ratcliff's and through the rest of Ascension Parish.

In the Aug. 24 crash, a Baker man driving a garbage truck was hit by a northbound KCS freight train traveling 47 mph, fatally throwing him from the cab, city police said.

The rail crossing is the only way in or out for Ratcliff’s and a small group of homes and businesses on dead-end North Felix. At the time of the collision, the man had been making the drive back across the tracks to East Railroad — the section Wax warns her customers.

An analysis of federal railroad data shows that the proposed intercity rail line, which has 124 crossings in all, had 27 rail crossing collisions between January 2015 and mid-2018.

Those incidents, which do not include the fatal crash in Gonzales on Aug. 24, led to nine injuries and one fatality. In the fatal incident, in 2015, a man jumped in front of an oncoming train in Prairieville, a federal railroad report says.

The proposed passenger train could travel up to 79 mph, considerably faster than freight trains. With higher speeds, according to a federal accident data, the chances increase for a fatal results in a train-vehicle collision. However, the speed limit of trains is often reduced when passing through urban areas with higher traffic volumes.

Bryan Jones, an associate vice president with HNTB, which did a technical analysis of the project in 2014, said that rail-grade crossing safety is an issue across the nation but the crash in Gonzales doesn’t call into question the feasibility of using freight lines through urban areas.

Amtrak, which has been in discussions with the Southern Rail Commission about operating the proposed intercity service, regularly uses freight lines elsewhere in the country, an Amtrak spokesman confirmed.

“If anything, the introduction of passenger rail on the line would mandate an increase in safety infrastructure at the crossings,” Jones said

The HNTB analysis calls for $260 million in track and other infrastructure upgrades, including a new $62 million concrete rail bridge over the Bonnet Carre Spillway. About $12.6 million would be spent to ensure all 103 public grade crossings would have gates with double crossing arms.

At the time of HNTB’s analysis in 2014, the majority of all crossings on the proposed route was more like the North Felix crossing and lacked gates.

The crossing at North Felix would see major improvements and be the location of a future Gonzales train depot for the passenger line. A master plan for the depot unveiled last week also calls for turning land where Ratcliff’s and other businesses are located into a park.

The upgrades would not apply to less used private crossings.

The expenditure, if funded, would represent a major influx in rail safety spending for southeast Louisiana. The state spends about $8.5 million per year statewide, paying for upgrades to about 20 crossings per year, said Rodney Mallett, spokesman for the state Department of Transportation and Development.

Where the Southern Rail Commission will get the money to do any of this remains unclear.

State highway officials said Friday they would not apply for a key federal grant this year on which backers had recently pinned their hopes. The deadline to apply for the $300 million pot of money known as the Consolidated Rail Infrastructure and Safety Improvements Program is Sept. 17.

Highway officials said they couldn't come up with enough match money for the Baton Rouge-to-New Orleans service once Mississippi and Alabama didn’t come across with their matches for a more expansive Gulf Coast service. The Louisiana service would have been connected to it.

Some also question if enough upgrades are proposed.

KCS, which owns 67 of the nearly 80 miles of track to be used, doesn’t want its tracks used for the passenger service but says a separate, new rail line is needed either next to its track or along Interstate 10.

“KCS does not believe the cost estimates done in past studies are anywhere near enough to introduce passenger service along this corridor, and is unaware of any funding for either the necessary capital investment or the annual operating subsidy, which the service would require,” said C. Doniele Carlson, spokeswoman for KCS.

Under federal law, Amtrak cannot be denied the right to use freight line tracks as long as reasonable infrastructure improvements are provided and the freight line is paid for the use.

KCS's Carlson said those costs would have to be negotiated and a federal board would have the final say if negotiations fail. Some rough estimates suggest a new rail line could cost $1 billion.

Rick Campbell, president of CTC Inc., a Texas engineering firm that specializes in grade crossing safety, said the state should look at “four quadrant gates” at all crossings to guard against bad driver behavior.

Rail line backers are considering the more common and less expensive “two quadrant gates,” in which crossing arms come down before only oncoming road traffic. Four quadrant gates include a second set of arms to close off the back side of each lane at the crossing, blocking drivers from snaking around the other arms.

During a news conference on Wednesday unveiling plans for the future Gonzales rail depot, John Spain, chairman of the rail commission and BRAF vice president, suggested the federal Consolidated Rail Infrastructure and Safety Improvements money might be a way to bring the project toward fruition.

While the state is now saying it won't apply in 2018, Spain said that the grant program has additional money in 2019, its last year, that it might be possible to tap.

“I’m looking forward to working with the governor and hope that we can apply for funds in September 2019,” he said.

GONZALES — A passenger train traveling between Baton Rouge and New Orleans would be a convenient, hassle-free and low-cost way to connect work…